Time to recreate an outfit from a cool movie that utilizes band collar shirts and high rise trousers!

There aren’t many movies that I can honestly say that I liked the fashion in it.   When I do, it’s usually a period film like Imitation Game  or The Great Gatsby (which isn’t accurate but has some good ideas)  that involves suits.  However, Her is something different.

Her is a slightly-futuristic film that contains some great style.  It’s not something overtly futuristic; no lapeless jackets or weird robes.  Instead, characters wear band collar shirts (in subtle block colors) and high rise trousers.  If you read the Vulture article on the film’s costuming, you’ll see that this is intentional.   The fashion in this future has certainly changed but it isn’t too drastic to make it unbelievable; it’s also got enough quirks to make it different than our current world.

Joaquin Phoenix’s character pretty much owns the entire look of the film, which I describe is slightly “hipster”.  I don’t mean that in a derogatory term.  I mean, I wear high rise trousers but I think I do it in a more sartorial way, which contrasts sharply with how Joaquin wears it in his film.  It’s more muted, yet with a lot of attention on color (note the saturated red shirt that pairs calmly with the brown trousers) and fit.   I’ve heard from different people that Joaquin’s character (named Theodore) dresses this way because he’s a loner. I don’t think this is true because if you pay attention, everyone dresses this way.  Everyone in this universe shares this unique style.

Overall, it’s a pretty iconic outfit that has stuck with me ever since I first saw it in a dorm room during college.  Just look at how cool and slouchy (something I always love) his style is!

It’s very sartorial “sad boy” with a hint of 1960s-early 1980s boldness (the 80s is more present on the other characters).   Now, I’ve never had a real opportunity to wear what he wears, just because I don’t think its pretty versatile.  While I do own some band collar shirts, I think I prefer sport shirts since they add much more flair and result in a more noticeable “sartorial casual” outfit. However, I won’t deny this outfit’s quirky charm and I finally decided to try my own hand on it. 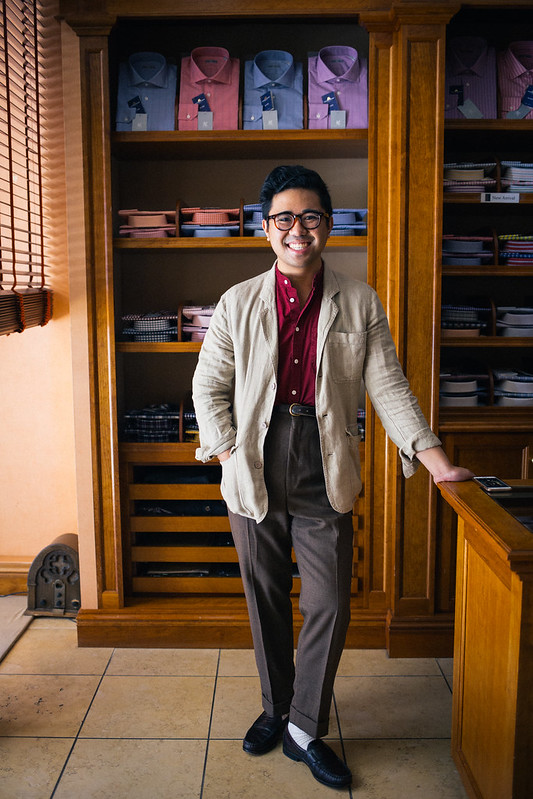 Here’s my version.  Pretty close, don’t you think? I even wore my glasses as a tribute to Theodore.

Like the original, it’s pretty simple: red band collar shirt, linen patch pocket jacket, and high rise brown trousers. I added some ivy flair with white socks and beef roll penny loafers. It’s partly because I’m not a fan of his footwear; the ivy detail makes it a bit more Ethan! The linen jacket dresses it down a bit (with nods to workwear), which is different than his cotton patch pocket sportcoat.  It still makes for a cool casual outfit that isn’t simply a button-down sans tie with trousers. It’s the tiny details that make it more interesting. 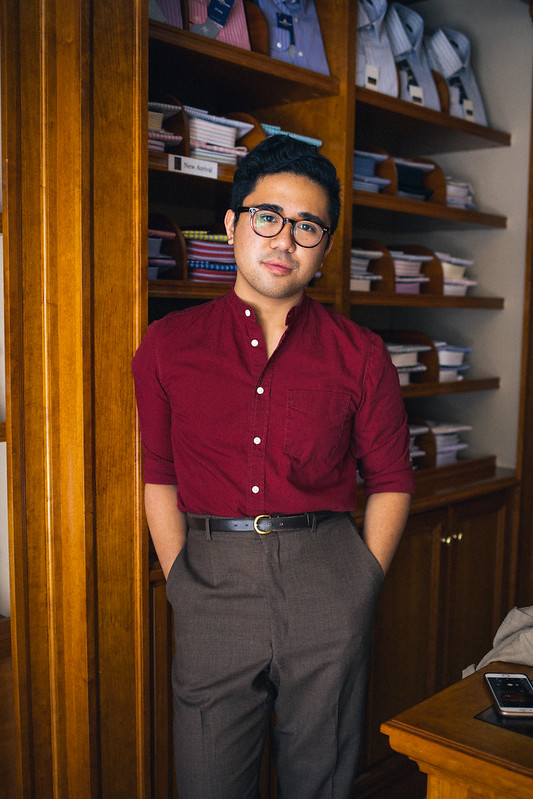 The entire outfit is pretty simple and casual. Like I said earlier, I don’t really wear my band collar shirts because vintage sportshirts  are a much better alternative that fits in with my everyday style. While the band collar is nice (and still diferent than most shirts out there), it’s a bit too hipster-y for me, especially when it’s worn with a more sartorial outfit than a workwear or straight casual one.  I’d honesty keep it with selvedge denim or untucked with black jeans and sneakers.

I will say that the color is amazing. Unlike Joaquin’s which is more red/orange, mine is a deep red (almost burgundy). This shade works better with my skin color and allows the white buttons to pop.  However, it does lack contrast to the trousers but I think that it just turns my outfit into a more subdued and mature version of Joaquin’s outfit. 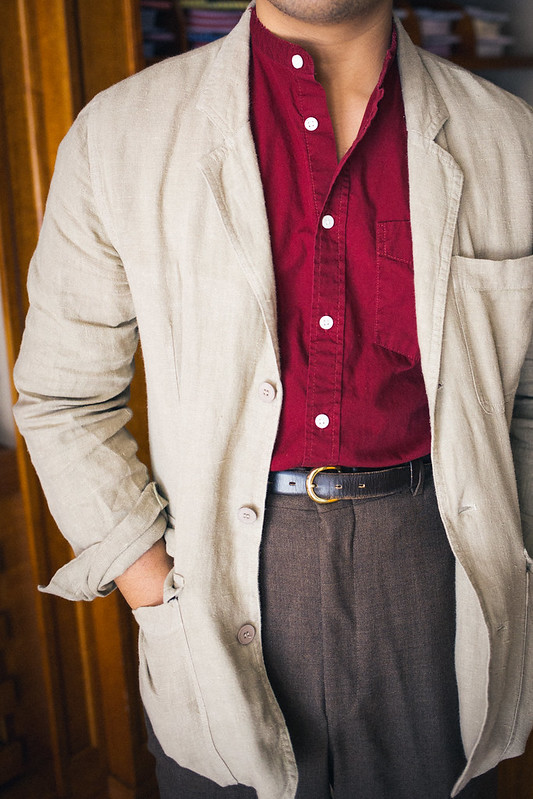 The shirt is actually an old H&M shirt that I got back in my early days of college.  It had a skimpy collar, so I simply wore it untucked with jeans. As my wardrobe developed, I realized that I didn’t have a need for “untucked, casual shirts” that weren’t sport shirts.   Instead of throwing it away and loosing one of my only saturated shirts, I decided to take a pair of scissors and just cut off the collar.  Obviously its not as clean as a shirt that was meant to be a band collar, but the frayed edges give it some cool character.

The trousers are one of the first pairs of thrifted 1960′-70’s trousers I’ve ever purchased.  They have an extremely high rise because they were actually a huge waist size (which often results in a larger rise).  I had them completely taken in and tapered; you might recognize them from this article.  They’re an interesting pair that I still wear from time to to time!

The linen jacket was purchased from that cute store in Paris! 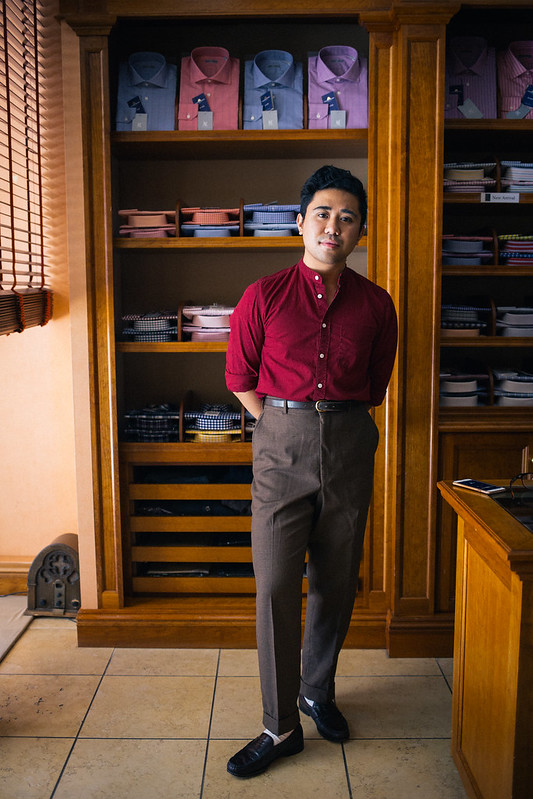 Ted (played by Joaquin Pheonix) had some great style in Her.  The use of high rise trousers and band collar shirts is quirky enough to be “futuristic” but provided enough vintage style to make it a world slightly separate than ours. To me, I get a combination of 60s meets 80’s style, which pretty much results in a hipster-esque outfit.

I don’t replicate movie outfits much often, but I’ve gotta say that I enjoyed this one!  It’s a little refreshing to look at a film that isn’t Gatsby or James Bond for inspiration.  It just proves that sometimes, even subtle quirky films can have great attire. Perhaps we should continue this series and look at something from Wes Anderson.  His use of color and costuming is really quite exquisite.

I hope you enjoyed this short article! Let me know what you think by commenting below.