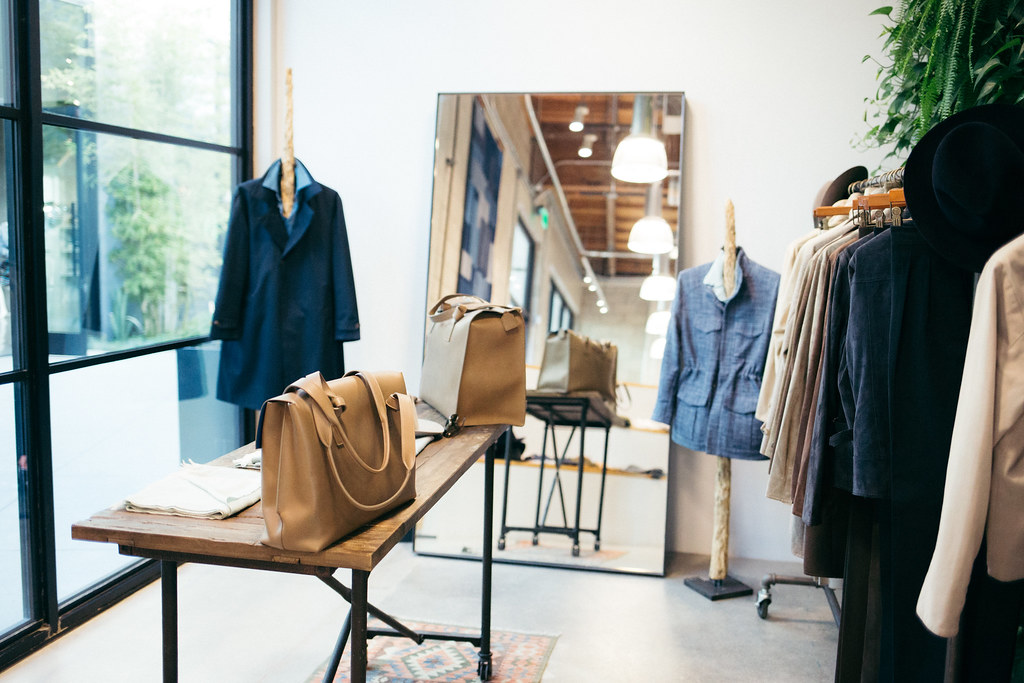 You’ve probably seen their amazing product photography on Instagram.  Well, I was able to check it out in person.  It was the first trunk show I’ve ever been to!

For those of you who don’t know, Stóffa is a relatively new brand that specializes in MTM casual clothing.  Their clean “white infinity” product shots are very popular on Instagram, showing off their selection of outerwear that’s paired wonderfully with trousers and hats, each in wonderful shades of earth tones.  The clearcut stand out is their flight jacket and double rider, which I’ve seen plenty of times on other menswear icons; Andreas Weinas comes to mind instantly.  The company is based in NY (with product made in Italy), but since everything is MTM, they do regular trunkshows all over the world.  As the new big thing in menswear, they’ve been covered to death by other writers who are way more connected than I am.  Be sure to read Die, Workwear and Permanent Style’s coverage on this brand.

So let’s go back a little bit.  This past week I’ve been dealing with some teeth anxiety (apparently, one of my wisdom teeth is finally popping out slowly and while it doesn’t hurt, it feels weird and I’m concerned about my teeth alignment) so I haven’t had any new blog posts planned.  Typically, things pop up randomly and I just write about them.  Anyway, while I was at the dentist for my bi-annual cleaning (and my inquiry about my teeth) I noticed that Stoffá had an LA trunk show this past weekend.  I got excited; I mean I live in LA.

Since I didn’t have anything to do until my D&D sessions with my pals that evening, I decided to use my free afternoon to check it out.  I emailed their customer service team to ask them what time they were available; I also made a point to say that I wasn’t looking to buy anything at this time as I simply wanted to check out the product for myself.  They responded fairly quickly, telling me that I could come in at anytime!  The trunk show was being held at Magasin (a brand I had not heard of) in Culver City; I stopped in at around 4:30 and stayed for about an hour.

The trunk show was held in a small corner by the window of Magasin (the entire area was super gentrified, but cool).  Their product selection of overcoats, flight jackets, double-riders, trousers, and field jackets were hanging on racks while a center table displayed their leather bag collection and fedoras.  A book of fabric swatches and order forms was tucked away on a shelf. 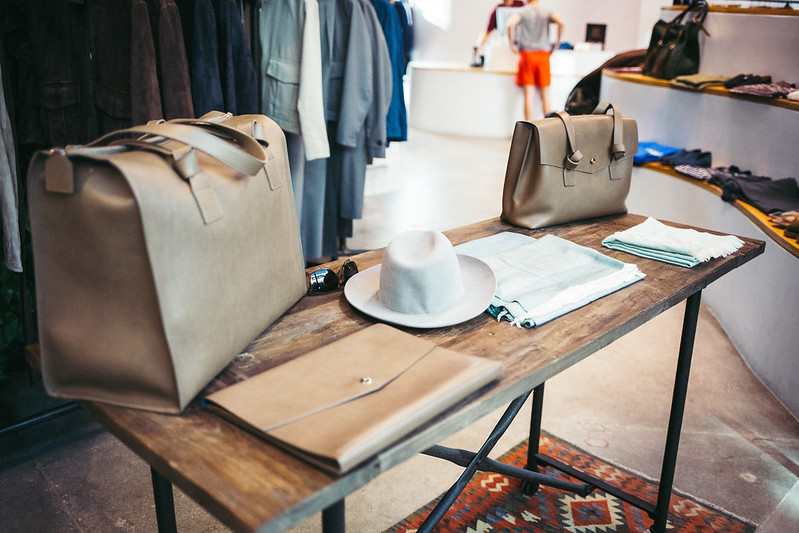 I was greeted by Nick Ragosta, who is definitely a subtle menswear icon to me, due to the fact that he was photographed sparingly during the Armoury’s hey-day.  He currently works for Stóffa and was manning the LA trunk show solo.  I didn’t get a chance to photograph him, but he was in a great  dark blue hopsack weave shirt and pleated khaki trousers with sockless tassel loafers.  Pretty simple and comfy, which is the best way to survive in this damn LA heat.

In between clients, he was able to give me a brief overview of the brand, of which I knew a little bit thanks to the aforementioned coverage by Derek and Simon.  Even though they do MTM, they like to be present at the delivery of each finished product in order to confirm the fit; as a result it takes a little over a month to receive your finished product after ordering, since you’ll have to wait until the next trunk show.  After you’ve ordered a few times, you’re welcome to simply have the garment mailed directly to you.

I’ll go into some of the products here. 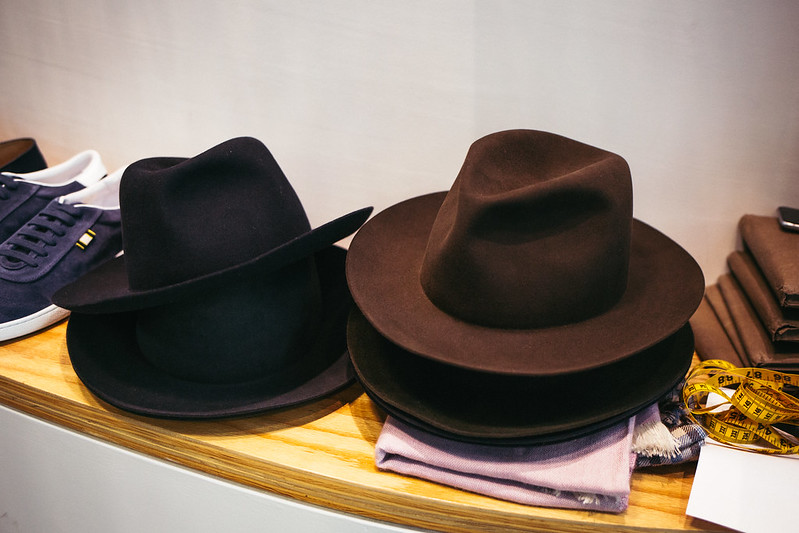 The fedoras come in a variety of different colors (blue, grey, brown) and are all made the same way: short crown, medium-wide brim, and no ribbon.  These details make their hats very modern and something similar to the shape of fedoras in the 1970’s and 1980s.  While they use both rabbit and beaver felt (the former being the cheaper option), they were both extremely soft; they are even rollable for easy storage!  I’m no hat guy, but I could barely tell the difference between the two. 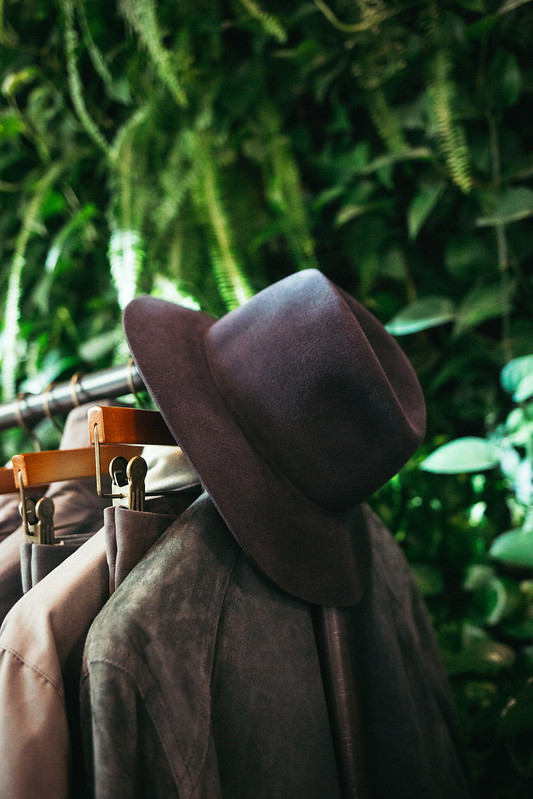 Because they are very bare-bones and made from soft felts, they are extremely malleable to your style.  I first saw them worn this way which made me think that they weren’t sturdy, but they were.  You can mold them easily without steam, as Nick was able to make a rounded western-workwear style crown with a flipped up brim; it was then followed by me pinching it to a classic C shape and having the classic snap front brim. 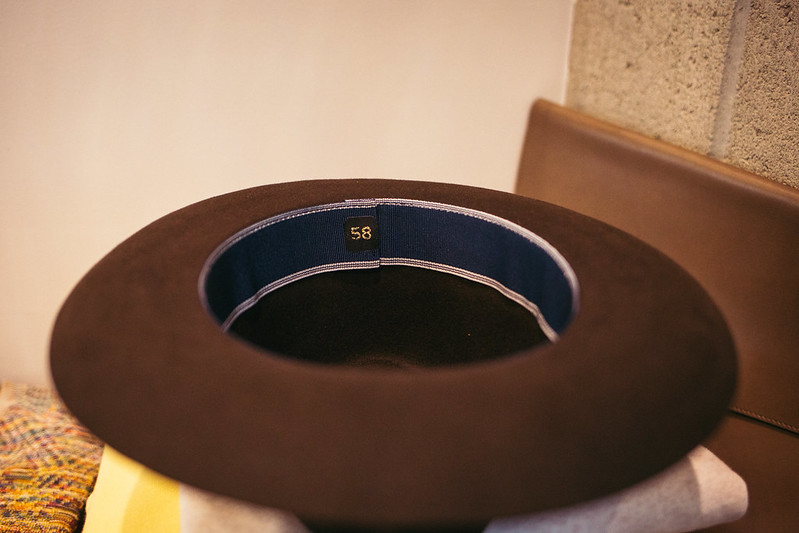 The 58 fit me perfectly! 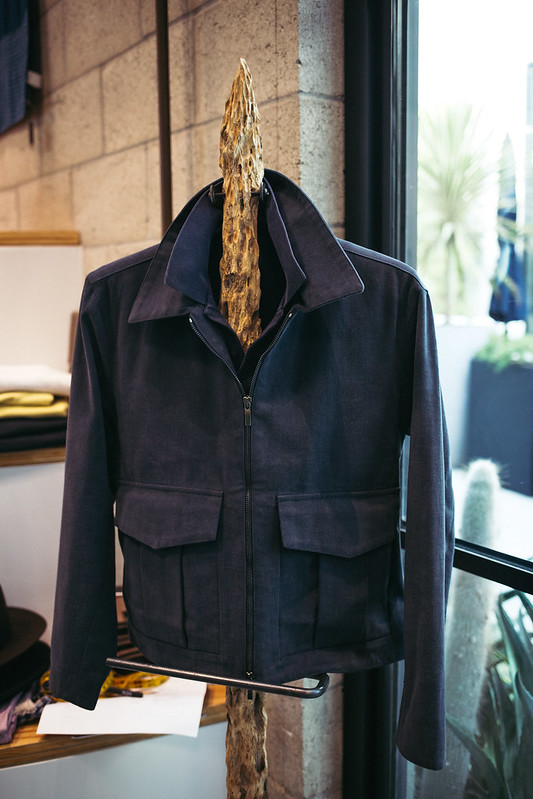 The flight jacket and double rider are the heavy hitters of the Stoffá collection since they are the most versatile. I could see myself wearing it with tailoring as well as Ethan’s classic date outfit.  Both jackets feature a long collar (something we’ve been missing from casual short jackets since the 1940’s), interior pockets, and cool front flap pockets that have a handwarmer pocket behind it. 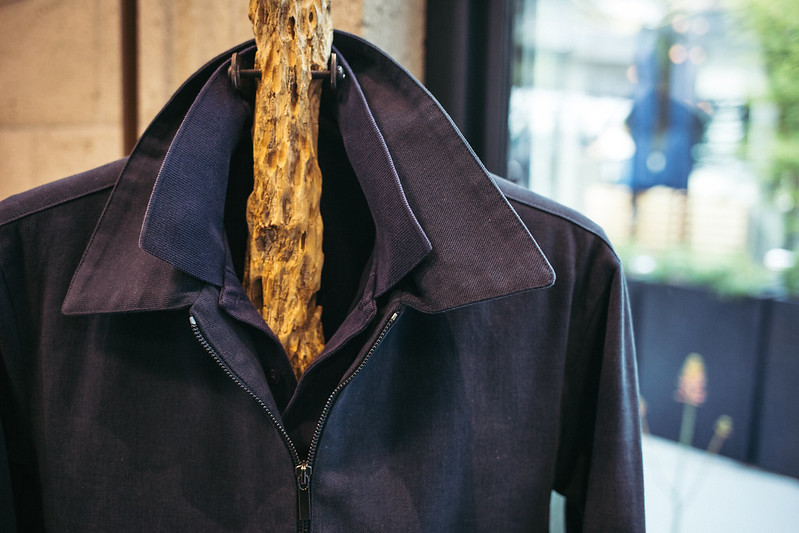 In order to make it utilitarian and comfortable, they include a double zipper, so you can have the top part be fitted and make the bottom part (near the waist) less suppressed. The zipper goes up to the collar, so it’s perfect for the days you get stuck out in the wind.  The wrists have double snap buttons. 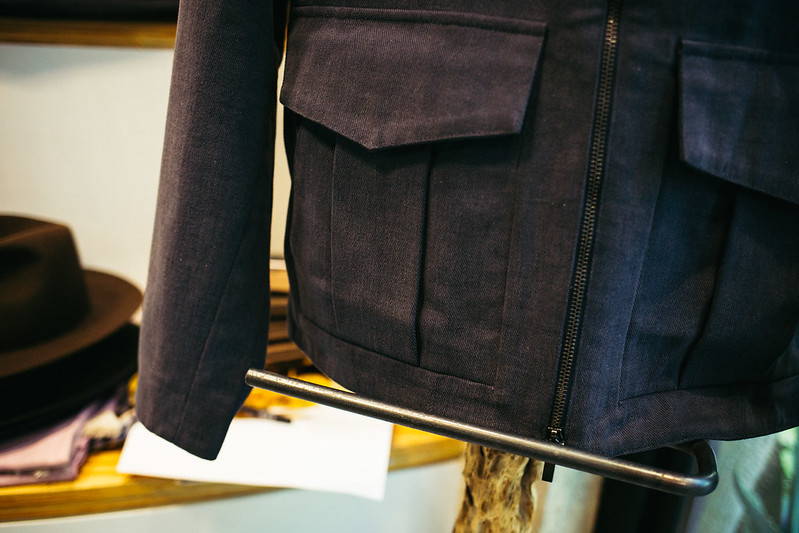 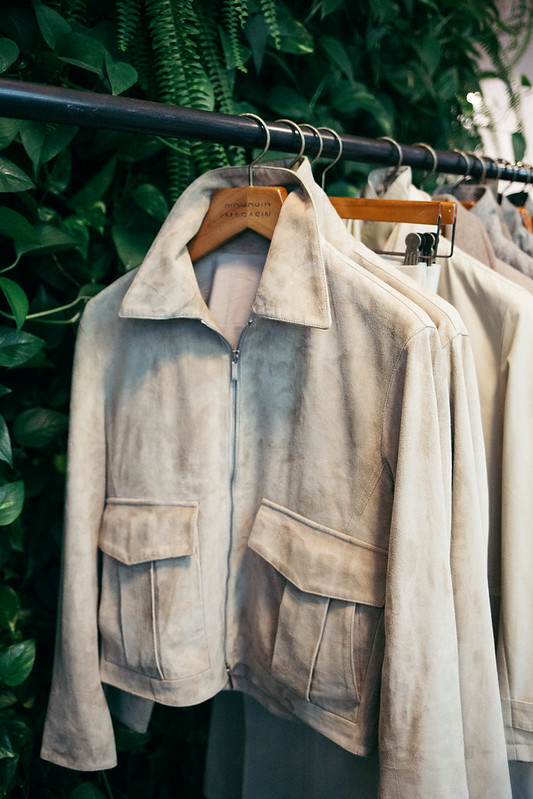 Like I said earlier, all the garments they produce are MTM, so the one’s I photographed are all samples or from Nick’s personal collection.  While you can’t change the model its self (I mean why would you, these are designed phenomenally), the normal measurements can also be adjusted: compensate uneven shoulders, long arms, chest-to-waist ratio, and so on. I was happy to learn that the the body can be made shorter to accommodate high rise trousers! 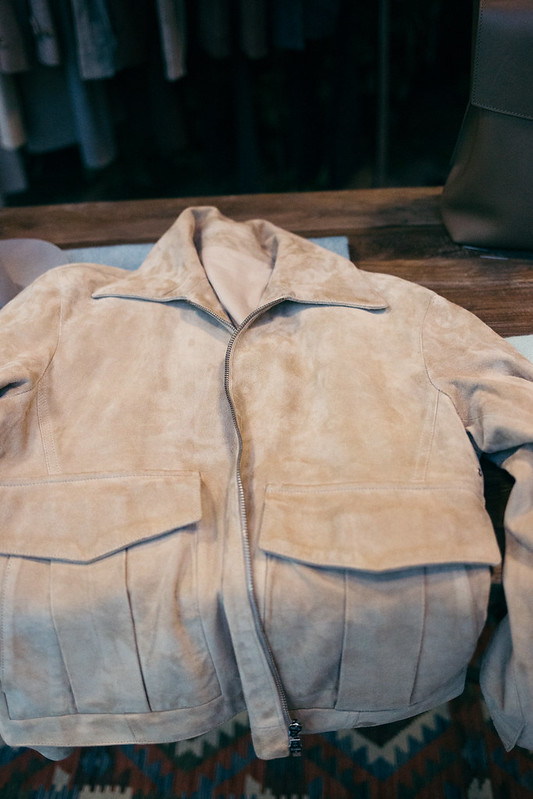 As you can see, there isn’t any branding or logos whatsoever on the garment, inside and out. You are able to put a monogram on the inside, right near the pocket.

You can get all the jackets (flight, double-rider, and field jacket) made in different fabrics. In order of most expensive to least, they do wool and suede, linen, and cotton. These fabrics then have a multitude of colors available to them,  which was pretty overwhelming to me, since they’re all versatile.  I think the dark brown  and navy blue suede were my favorites. 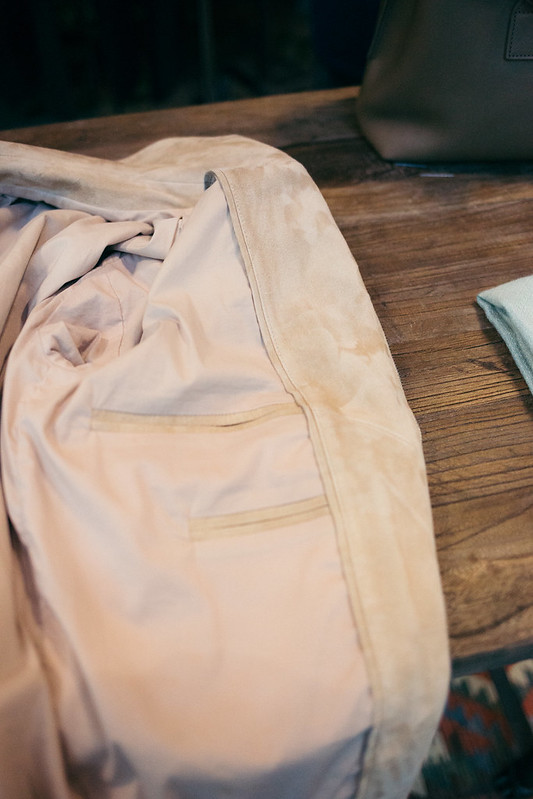 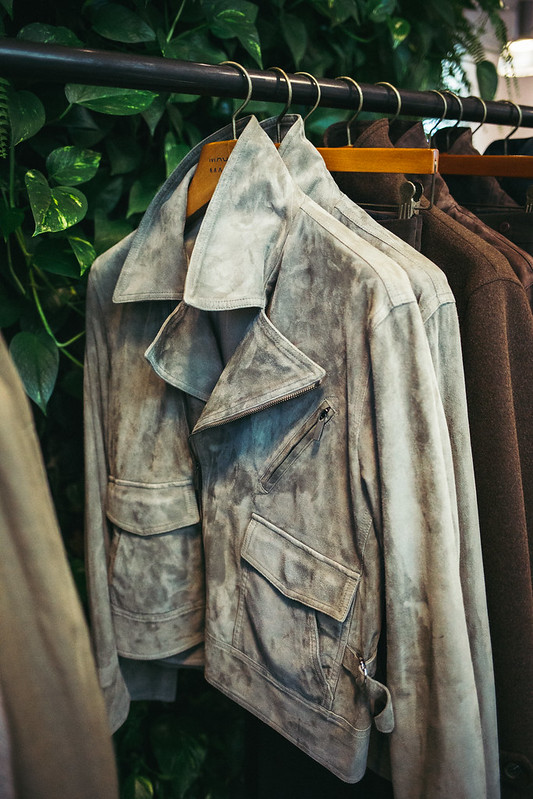 The double rider is very similar to the flight jacket except that it includes slightly different details other than the asymmetrical zip. The pockets lack the box pleat and feature a slanted handwarmer entry that is unfortunately smaller than the one on the flight jacket.  They do add side adjusters, which I think is a nice touch.

Overall, the double rider is extremely clean in terms of design, since it lacks all the extra studs and epaulets that you normally see on similar pieces .  The fabric and construction is also very soft, which makes it feel like my vintage summer attire.  Its perfectly slouchy and form-flattering; I really wish I could have one. 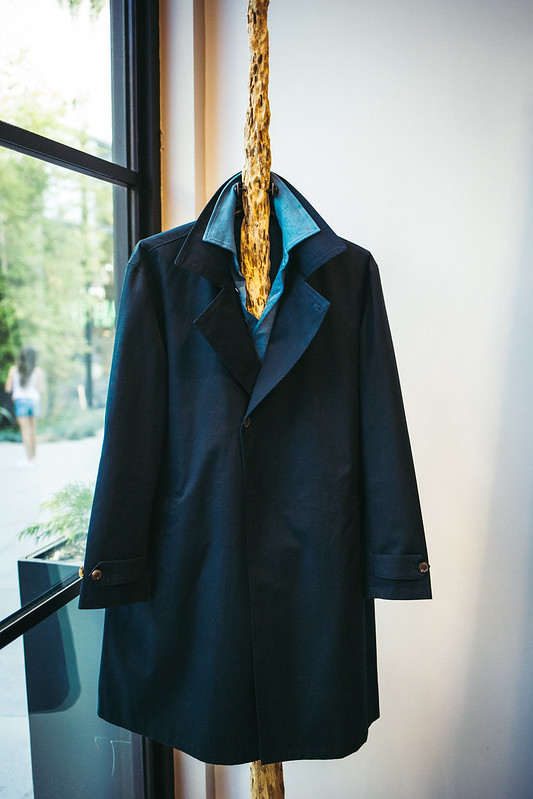 The coat is their take on the classic overcoat, featuring an interesting asymmetrical fastening which makes it reminiscent of the double rider.  Its’s not quite like a double breasted coat, since it features a wide notch lapel with double buttons, to make it close up at the top (like the rest of their jackets).  The pocket welt is wide but there are no other stitches or details present on the outside; the result is clean overcoat that is definitely versatile.  I can just imagine the cool, casually tailored look that you could do with this coat. 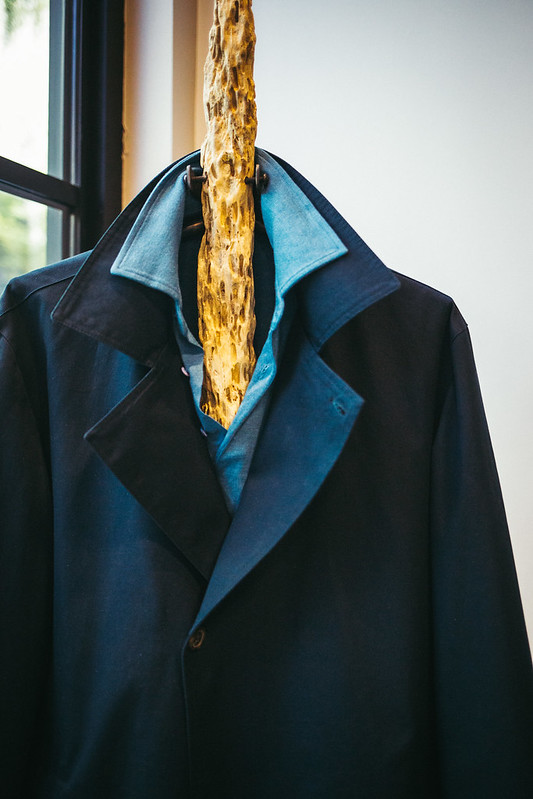 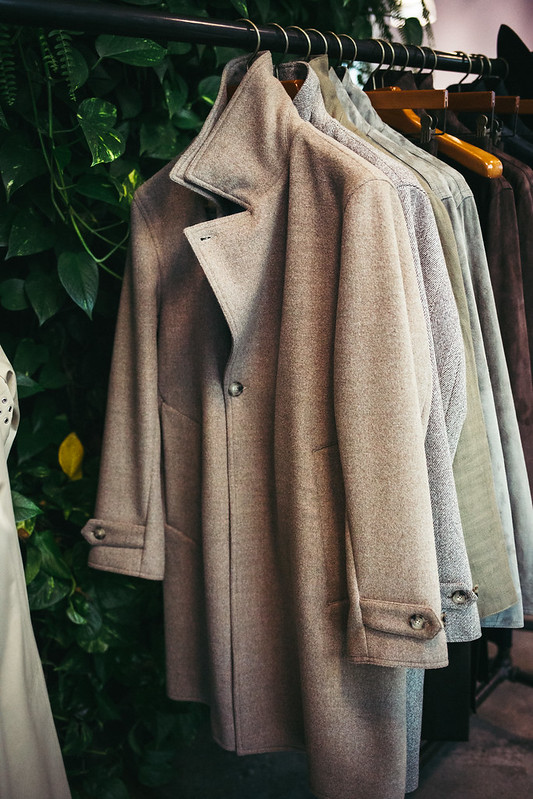 Look at that huge pocket welt.

Like everything else here, the coat is available in different fabrics. I vaguely remember Nick telling me that they had a treated cotton that functions expressly as a raincoat, but I could be wrong.

The fit is great, being extremely soft, and hangs pretty well on the body.  I’ll be honest and say that the coats aren’t big in my mind since I have a brown 1940’s overcoat that is pretty similar in look. 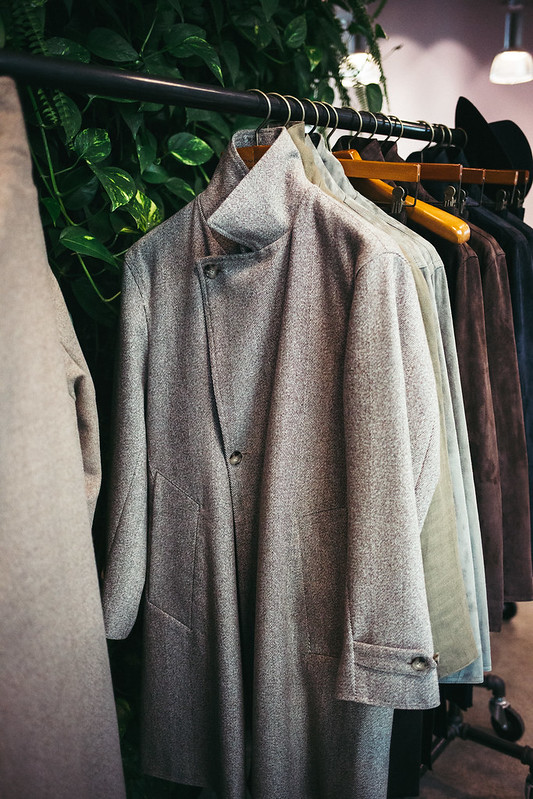 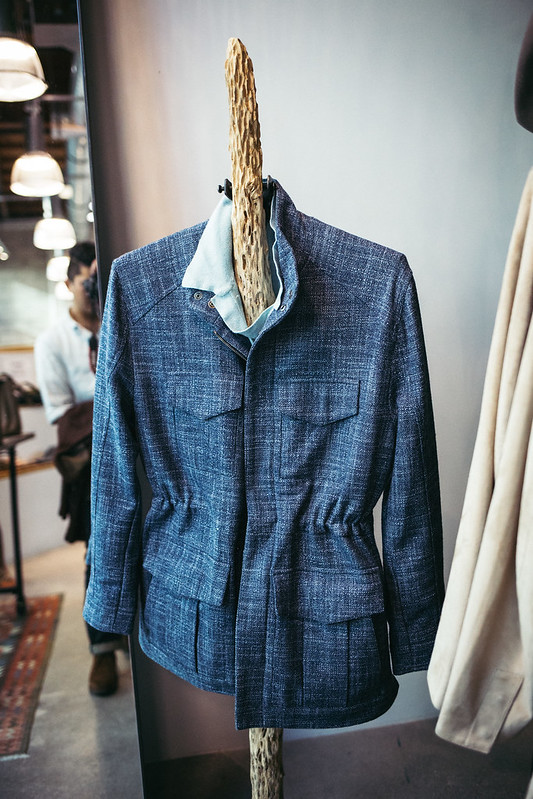 Stóffa’s attention to clean aesthetics and “redoing” classics is pretty apparent on their field jacket.  It’s pretty similar to the M-65 one except most of the elements are toned down. One major thing is that the pockets are smaller and inset to make the jacket less bulky.   They still have the classic flaps and box pleats, but its pretty different than what you’d expect from a J. Crew or surplus one.  The collar is also scaled down and the shoulders have lost their epaulets (the latter is a good move).  For waist suppression, they have an interior toggle. 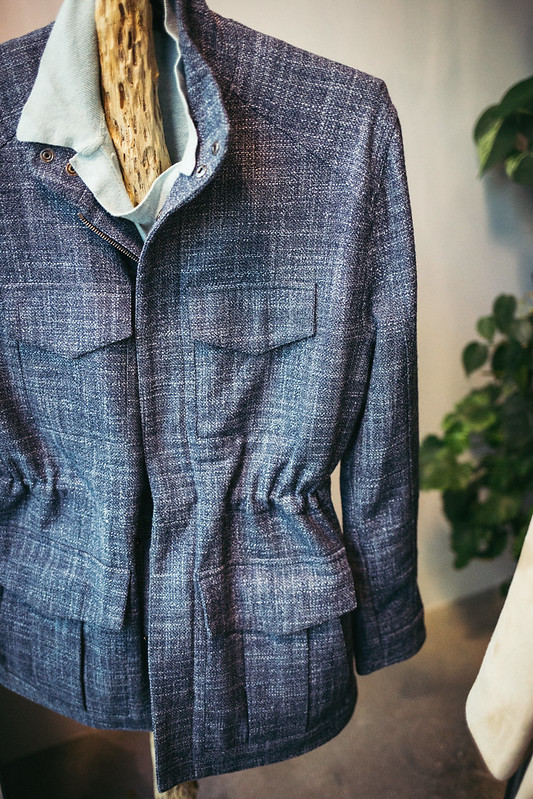 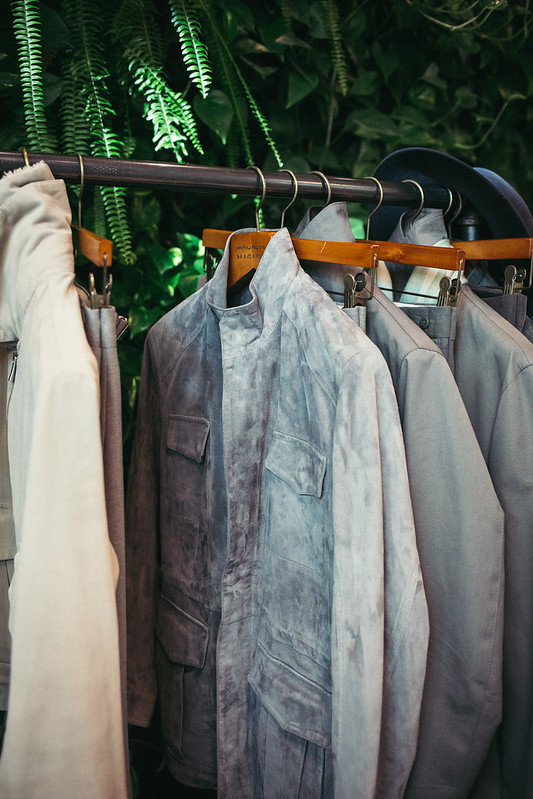 The suede variety.  Note how “flat” the front looks now that the bellowed pockets are gone! 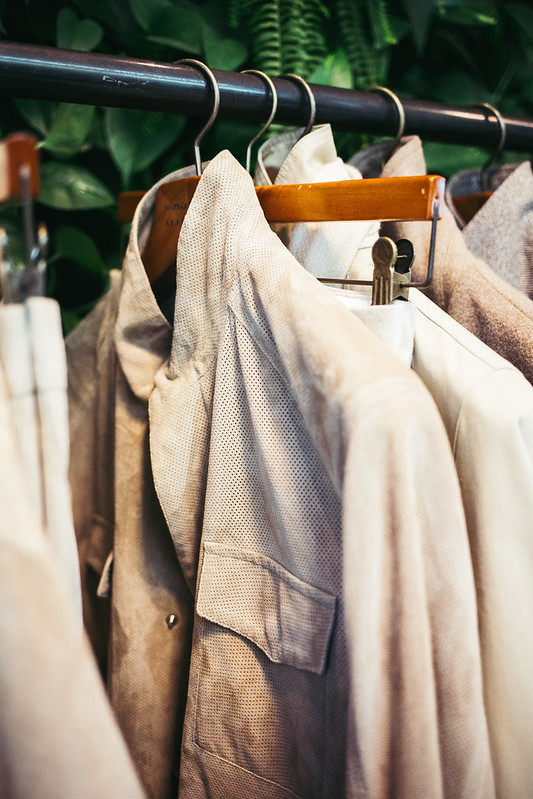 Perforated suede for something extremely breathable.

As I perfect my field jackets to be sturdier (and vintage), I didn’t try on the Stóffa one.  However, you can check out my pal Blue Loafers for a real review on this garment. His choice of mint green is a bold one! 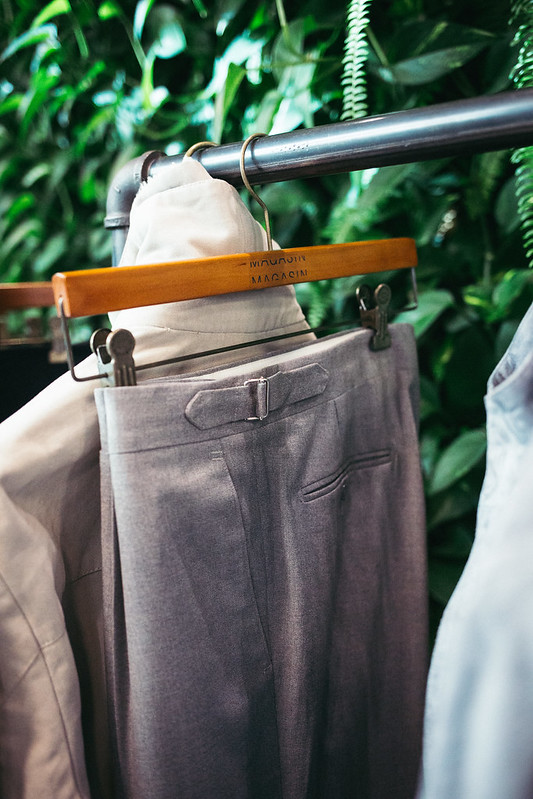 These trousers look beautiful.  Like most MTM companies you can customize them to your liking, whether that means you want pleats, flat-fronts, suspender buttons, or side-tab adjusters.   I didn’t get to try any of them on and can’t attest to the fit, but they look great.  My preferred trouser is probably a double pleated, high-rise pair with side adjusters which they do very well.

You can see that these are a available in a variety of fabrics.  The brown cotton moleskin was my favorite! 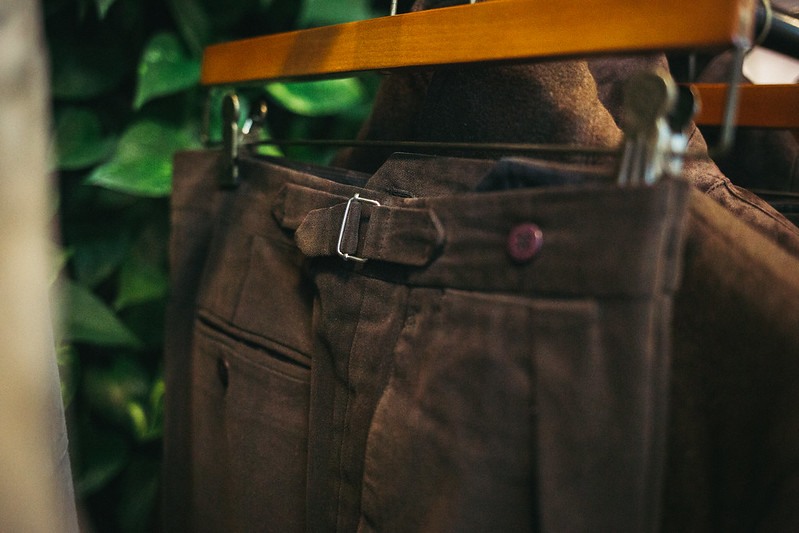 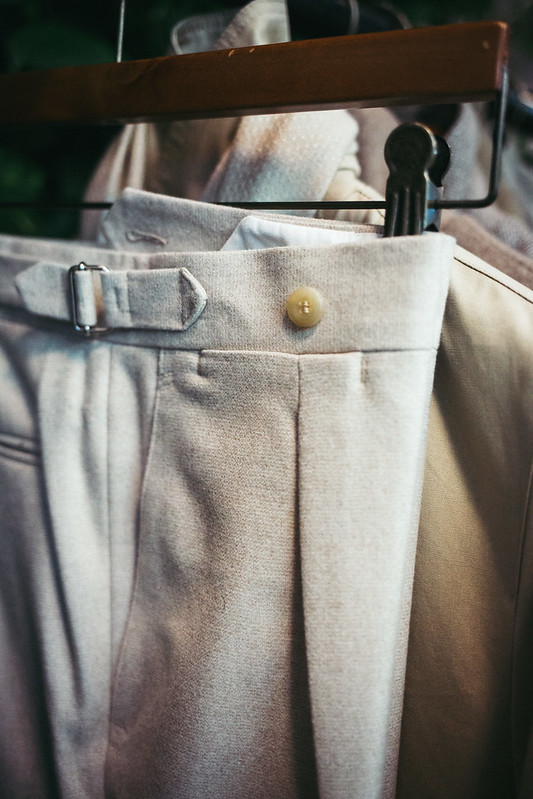 Nick let me try on some of the garments for my self! I wish I was able to try on more (and get a few for myself).  You can see how easy they are to pull off!

The fedora, which was previously shaped in a much different way. 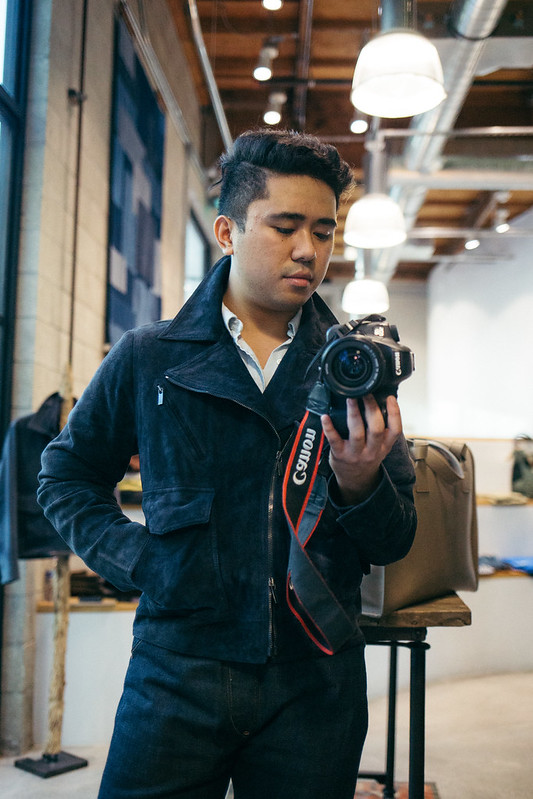 Stóffa is a great brand that has developed  fantastic, clean aesthetic with products that work well naturally with each other.  As a guy who wears a lot of browns, blues, and greys in his wardrobe, I am confident that Stóffa would be a welcome addition. Those flight jackets and double riders would be amazing.

This was my first trunk show ever (I don’t hear much about this sort of thing in LA), but I have to say that it was awesome. Nick was very knowledgable and passionate about the products and he answered all my basic-ass questions.  I was pretty nervous since I knew I couldn’t order anything and yet there I was trying on different variations of expertly crafted garments.

Even though I only had a few moments to talk with Nick, we discussed some interesting topics.  I asked him what he thought of the LA menswear world, since he had been based in NYC for most of his career (The Armoury and now Stóffa). Like most of the men I’ve talked to, they say that LA is a much more casual place.   On the subject of adapting to the LA market, Nick said that it’s not their original model of bespoke/tailoring guys needing a casual brand, but instead trying to push the extremely casual LA guy into a slightly more upscale and custom garment.  Stóffa is still pretty casual, and I can definitely see the appeal among the elites of LA.  I mean, there literally isn’t a menswear world down here; it’s all streetwear or rich people.

You can always learn more by going to their website.  They have regular trunk shows in LA, so I encourage my readers to go check it out sometime or even make the investment and grabbing something.  This brand is killing it in the tailored casual category.