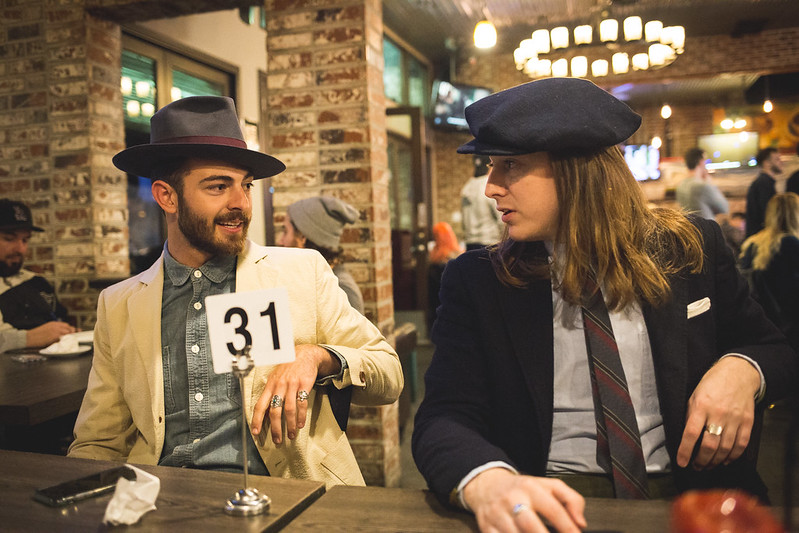 After featuring these guys a few times in our blog posts and podcasts, I thought it would be great to have an entire article dedicated to the Gooch Brothers.

Note:  These pictures are kinda old.  This was published for the release of my latest pod ep, which is about Gooch Collective and ethical fashion, but the episode and pictures were taken in early March!

Menswear really is dead in LA, especially when you compare it to the outside world.  Sure we may have circles of streetwear, high fashion, and vintage, but there really isn’t one for classic/classic-inspired menswear.  What I’ve found is that there are definitely individual enthusiasts of clothing rather than a big group.  I’ve made some progress in expanding it beyond just Spencer and me (especially if you look at Cicada or Inspiration) but it’s hard to find guys close enough to hang out apart from a big event.  That’s where the Gooch Brothers come in. 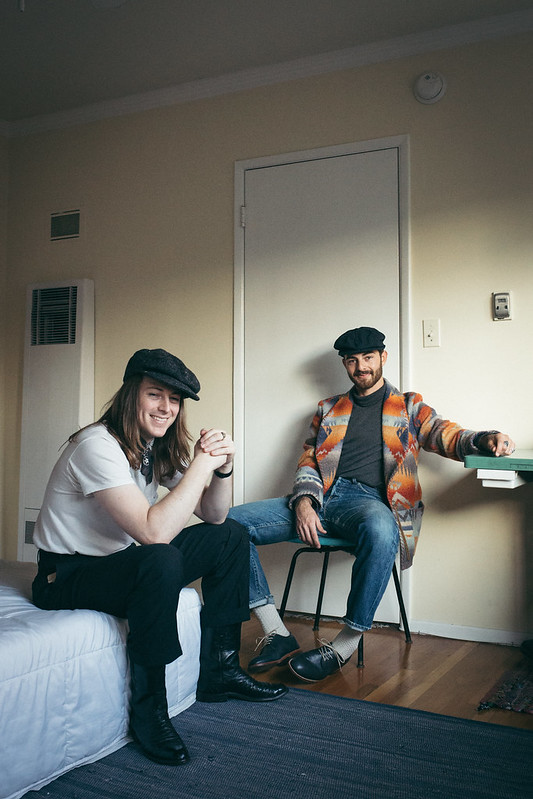 I know I’ve written about these guys before and even had a podcast with each of them individually (here and here) and together, but this is the first time they’ve gotten a solo article.

If you’ve listened to the podcast, you’ll know that Joshua and I had actually been instagram mutuals for a long time.  He says that he found my blog/instagram and had been reading during the recent year.  Even though he lives in Studio City (about 30 minutes from my hometown of Pasadena), I had never met him; I actually met his brother Garret during the Bloke opening party last year.  Garret and I didn’t talk much at the party. 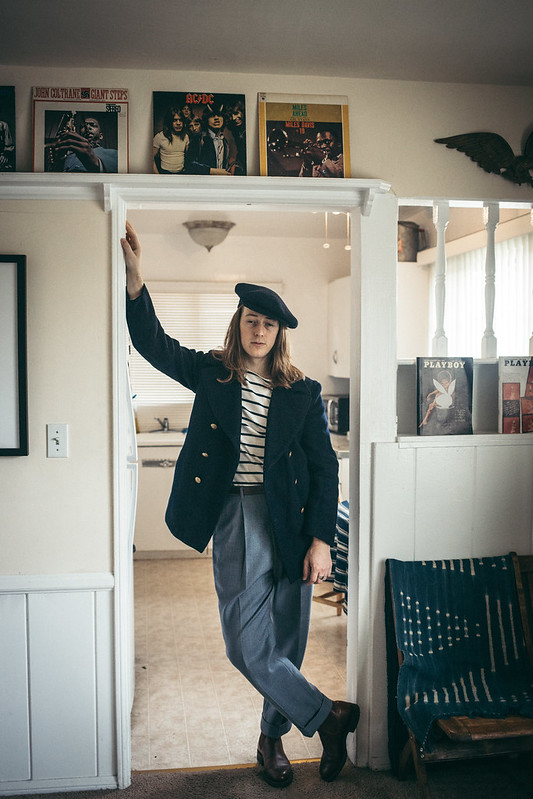 One day, I was stranded at home without a car (because it was getting fixed) and posted about it on instagram.  Joshua DM’d me and asked me if I wanted to hang out, to which I happily agreed.  We spent the day drinking boba and shopping for vintage, which was actually the day that I got the 1940’s DB flannel suit.   That’s how I learned a bit more about him, how he’s been a touring musician (playing guitar) since he was 17 and how it influenced his taste in menswear.  We’ve hung out a few more times since then, which is sorta how I got invited to the first Gooch Collective event. 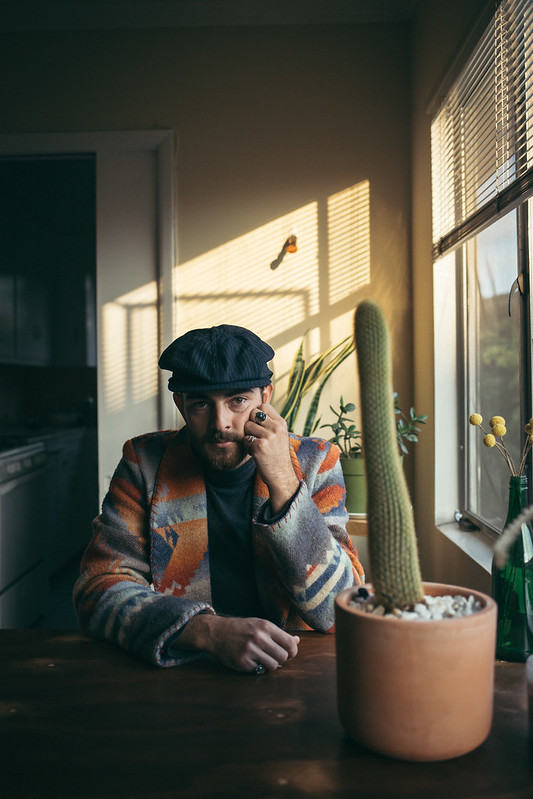 Garret and I actually met before the Bloke opening party, but neither of us really knew who each other was.  I was at the Rose Bowl Flea Market catching up with Akira, an apprentice at Wellema’s, when he brought me over the 2120 booth.  That’s when I met the energetic and knowledgeable salesman/brand director who turned out to be Garret Gooch.  We saw each other again at the Gooch Collective event at the Wellema Hat Co, but it really wasn’t until  Inspiration LA, that we all became closer friends.

For the past few weeks, every weekend has been spent with the with these brothers, whether we were hammering out podcast recordings before Josh left for tour or just playing 80s arcade games and getting boba.    Personally, I’m really glad to have met these guys because we actually had something in common apart from the clothing. This is a huge contrast to regular menswear (and even vintage) where I’ve felt a bit like an outsider.  For example, the Gooch Brothers love Comedy Bang Bang, which defines my type of comedy (and personality) quite well. They might have an appreciation for tailoring, vintage, and thrifting, but they aren’t afraid to be extremely dorky in public.   In short, they aren’t stuffy at all!  The best part though, is how inspiring they are.

Not only are they doing what they love (music and brand marketing) but they also put that  same love into their style.  They’ve moved beyond just wearing clothes to be “dapper” or “cool” but because they legitimately enjoy the pieces they own.  Some of it may be vintage, but others are handcrafted, beautiful arments that come from small scale operations that don’t sacrifices ethics or quality.   Wellema and Monsivais are some that we know already, but they’ve also introduced me to Thee Teenaged (vintage-inspired selvedge denim made by USA immigrants) and Knickerbocker (they made the beanies).  These guys are always on the hunt for great clothing, but they always make sure to support the little brands, which is where the Gooch Collective comes in.

The Gooch Collective might be one of the coolest things out there that hasn’t really existed before.  Bringing together “artisan craft, music, and community” may sound like a bunch of buzzwords, but it’s true.  Like I said before, I have never been to any real fashion event in LA because its almost always based on your connections.  Celebrities and bloggers go to those things, not regular people off the street, and they wear the biggest brands that paid the most for that spot.  It’s all PR and no soul.

Instead the Gooch Collective has heart.  They bring in  real clothiers who make their things ethically and with great quality, like Clutch Golf or 2120 Handcrafted.   It’s about taking these small intimate brands and introducing them to the world.  I can’t imagine a similar event (like a fashion week or tradeshow) that allows a classic menswear guy like me to hang out with entrepreneurs, designers, or regular LA people.  Don’t forget the fact that you’ll be listening to live music performed by some of the best session musicians in the world.  I’m not even kidding; Josh currently tours with Shania Twain while his friends and colleagues have played with Macy Gray, Norah Jones, and Tenacious D.

Anyway, that’s enough with the mushy stuff.  I just want to say that I’m really glad that I got to become great friends with these guys.  I wouldn’t have been able to enter a new phase with the blog (new events, photography styles, brands) or start a podcast without their input and support!  You can listen to our individual interviews with Joshua and Garret here and here or listen to the Gooch Collective one here.

The following pictures were taken after recording our podcast episode on The Gooch Collective, where we also talk about consuming menswear in an ethical way.  We’re all pretty straightedge people, so we had a wholesome night!  Dinner took place at Crave Cafe, a 24-hour diner that had some great (albeit slightly expensive) food.  Naturally, we were all dressed up, which turned quite a few heads at this stereotypically LA place.  I’m sure people were wondering why we were wearing tailoring at midnight. 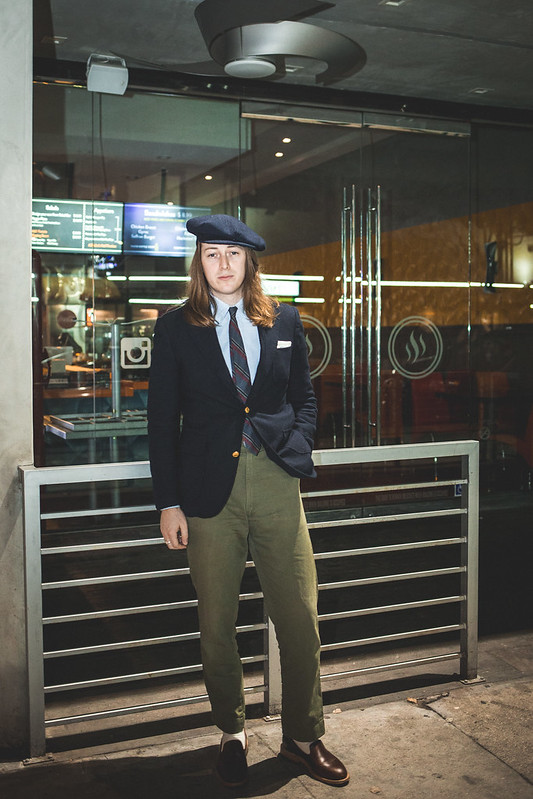 Josh asked me what I thought he should wear, and I naturally responded with “something ivy”.  He took that to heart and made a combo that I would definitely wear.  For starters he has a Kamakura Vintage Ivy OCBD and a slim 60’s striped tie; that’s the absolute basics you need for doing an ivy look.  Obviously a navy sack-jacket is needed, but this one takes a bit of a turn.  It’s a fuzzy wool Brooks Brothers blazer with camo lining, made during one of their infrequent collaborations; Josh actually got it for under $100 at Wastelands.  He finishes the outfit off with  a linen Monsivais cap, olive 1950’s work trousers and 2120 loafers.   I really dig his interpretation of ivy style. 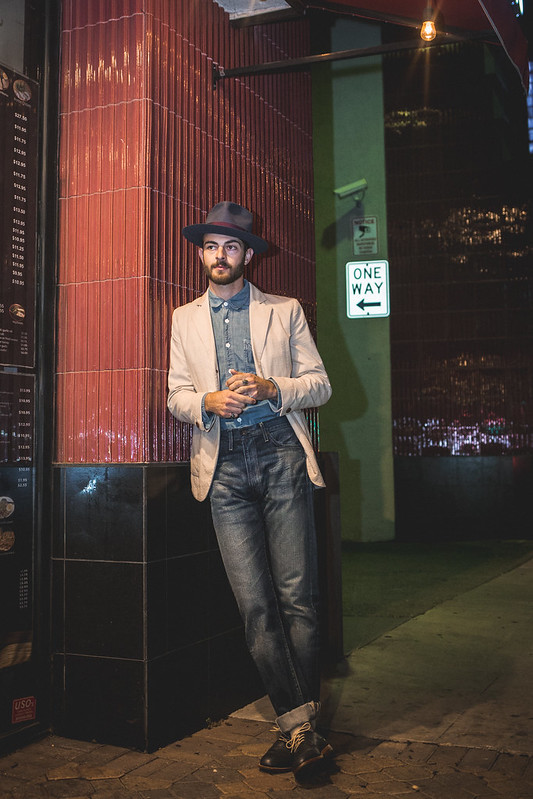 Garret has a look that’s perfect for summer.  On top, he has an amazing 60’s faded navy fedora that features a burgundy band for some contrast; he echoes that blue in his chambray workshirt and 2120 loafers.  While he is a baller for wearing a well loved pair of LVCs, the best part is his khaki seersucker jacket.  You’ll see the details in the other images, but it has two patch pockets and has a high buttoning stance, which makes it very similar to what you’d see on a 1920’s suit.  It originally was part of a suit, but he had to ditch the trousers due to a chocolate mishap. 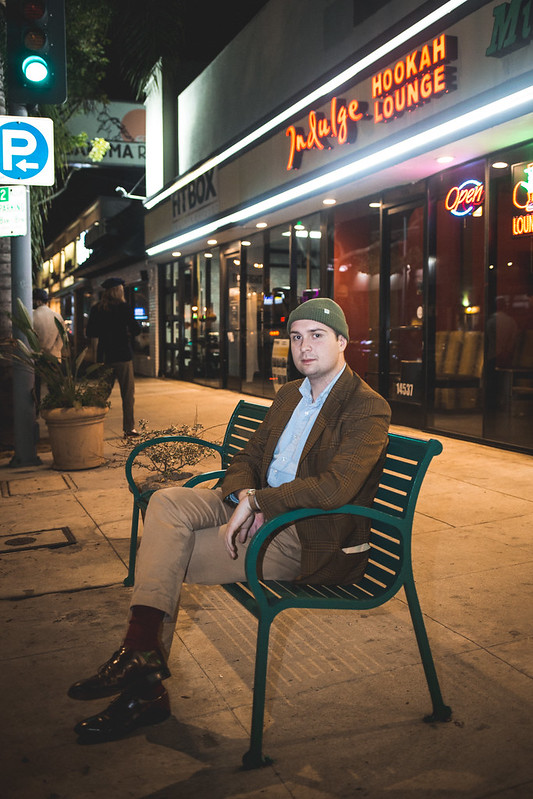 Spencer follows my advice for a post-work outfit, rocking a beanie with tailoring.  It definitely dresses down the outfit, which makes him look more like a regular guy than a tryhard.  It’s a pretty standard ivy outfit, with a blue OCBD and brown plaid sack-jacket worn with cuffed chinos.  Can’t you tell that we like blue and brown?  It’s the best combination that inherently “looks old” but it’s definitely not out of style. 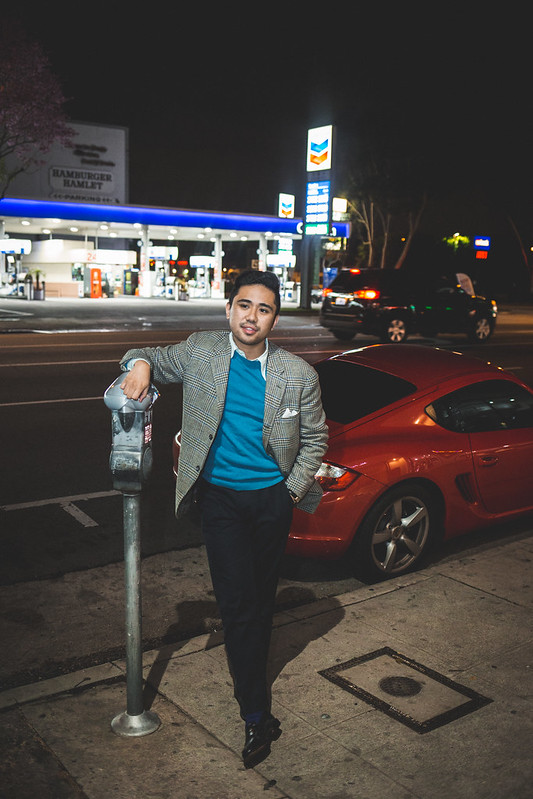 EDIT: I know we’re in spring/summer right now, but it’s been cold in LA!

After creating a huge Drake’s inspiration album when I was bored, I really felt the need to do some “pops of color”.  Normally, I wear grey and brown, but I decided to rock some blue, which ended up taking over the entire outfit.  Blue is present in the checks of my 1960’s Brooks Brothers sack-jacket, the Tintin-esque wool/poly sweater (that I got from H&M 5 years ago), my navy chinos, and my Uniqlo socks.   If you were to tell  me that I’d  be seen wearing bright blue sweaters and socks a year ago, I would’ve vehemently denied it.  I really blame the Drake’s FW17 lookbook for making me do this.

Honestly though, it’s a nice change of pace for me.   Following Drake’s direction on injecting color into a wardrobe is really inspiring, especially since most people don’t do it well.  Most of the time, it ends up looking more Pitti Peacock/Dapper Bro instead of classic menswear.

Here’s what happens with four menswear dorks go out to dinner in LA.  We’re all just trying to make menswear less stuffy! 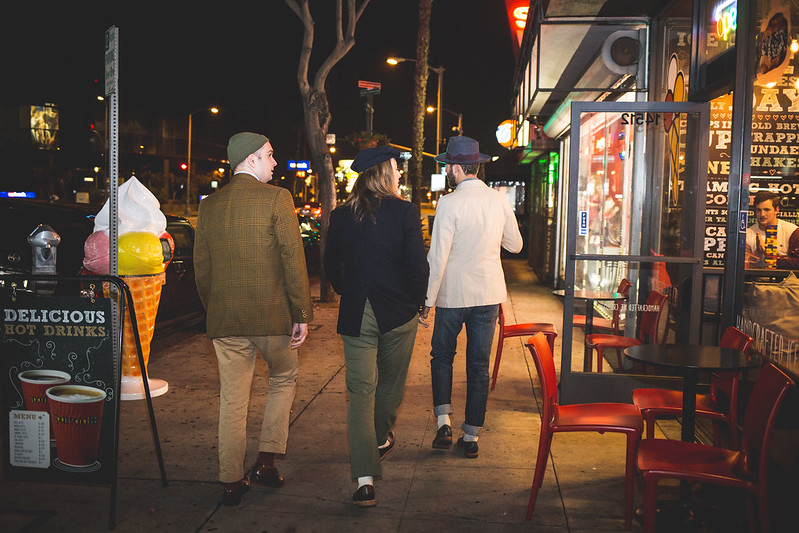 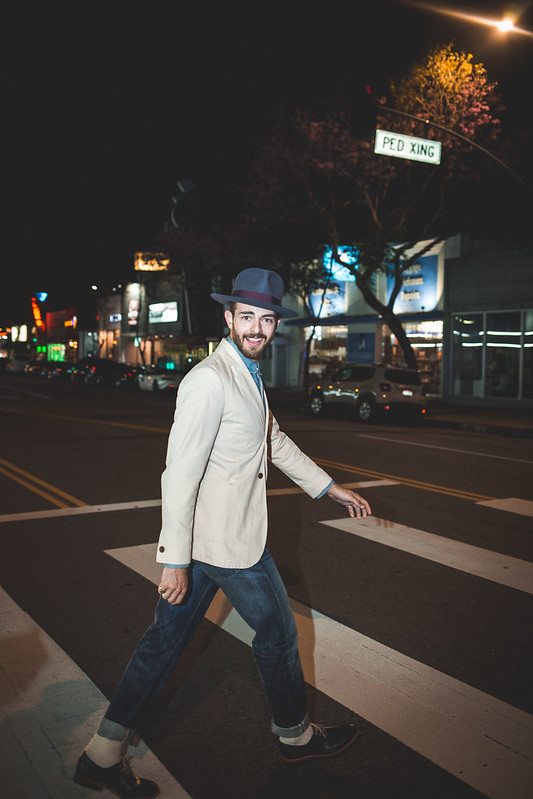 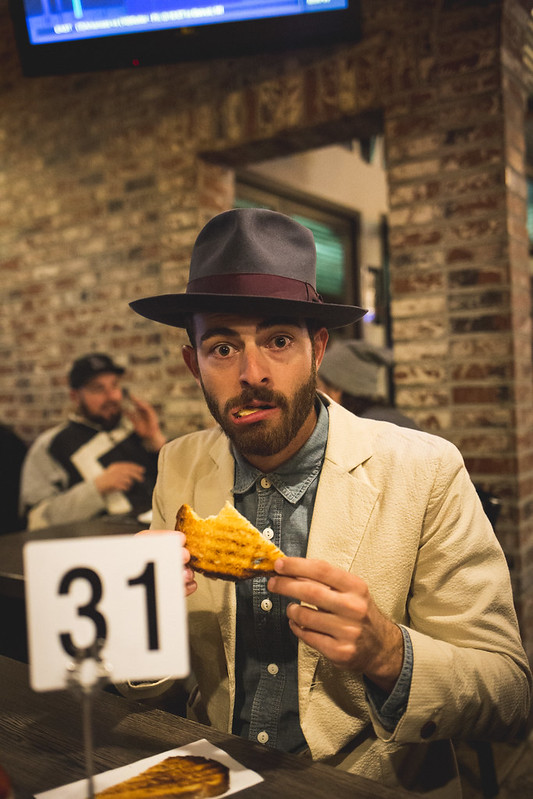 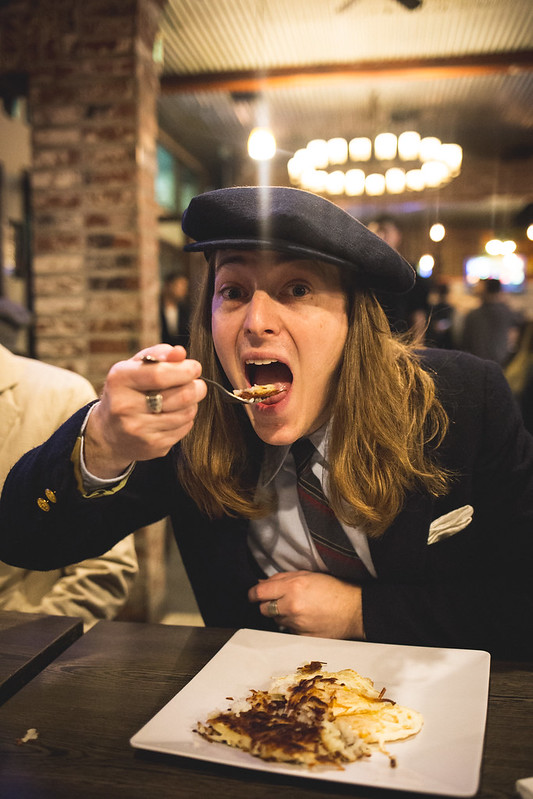 Can I interest you in an egg in this trying time? 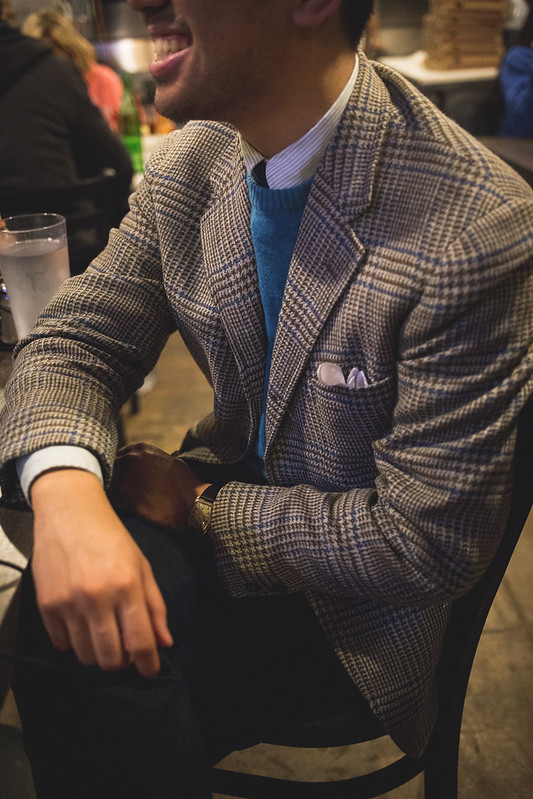 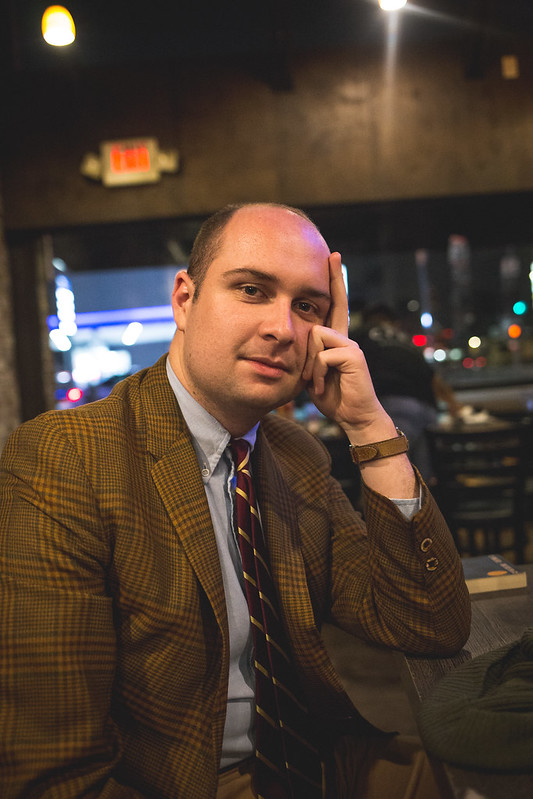 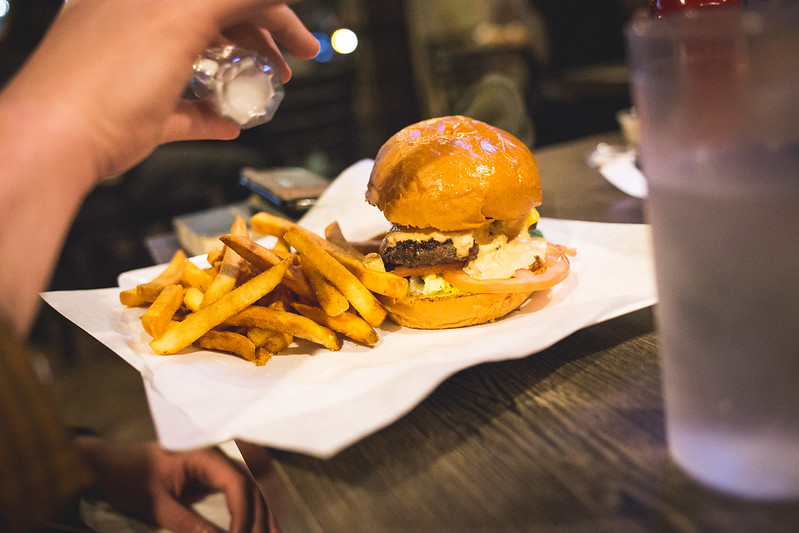 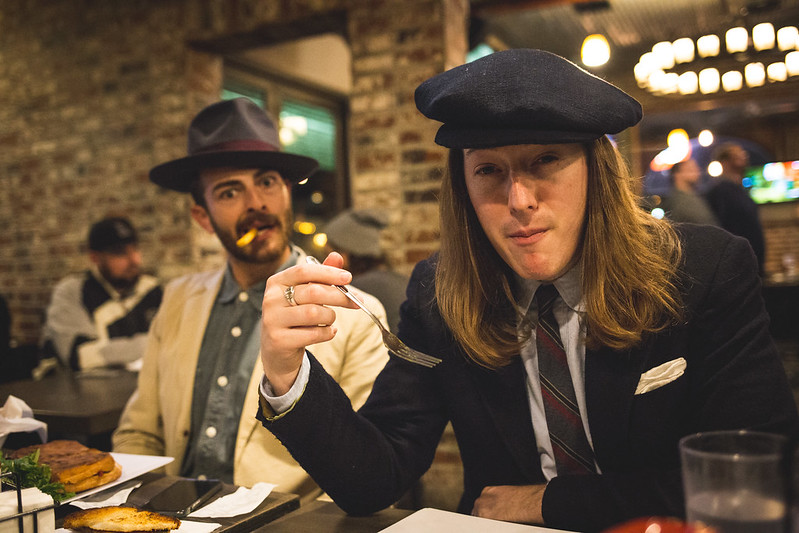 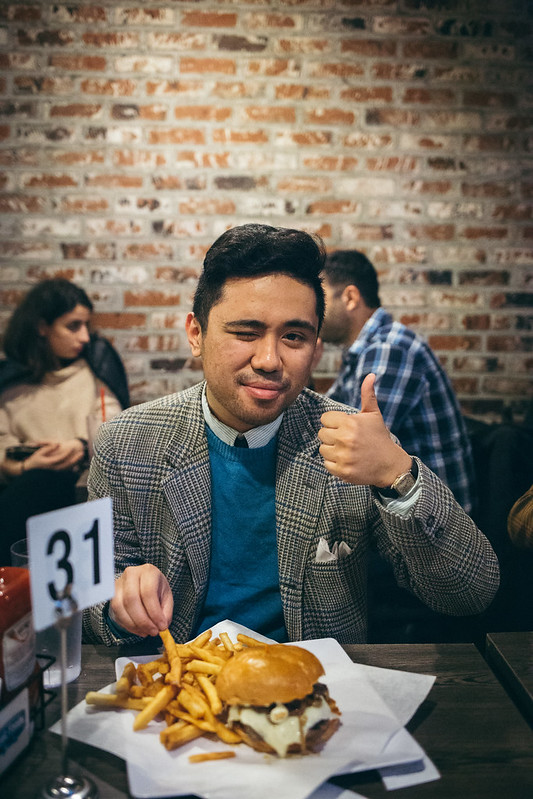 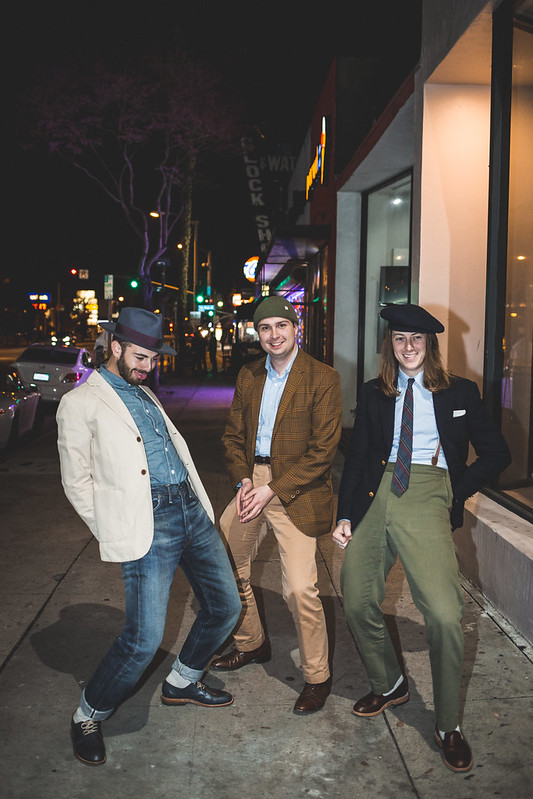 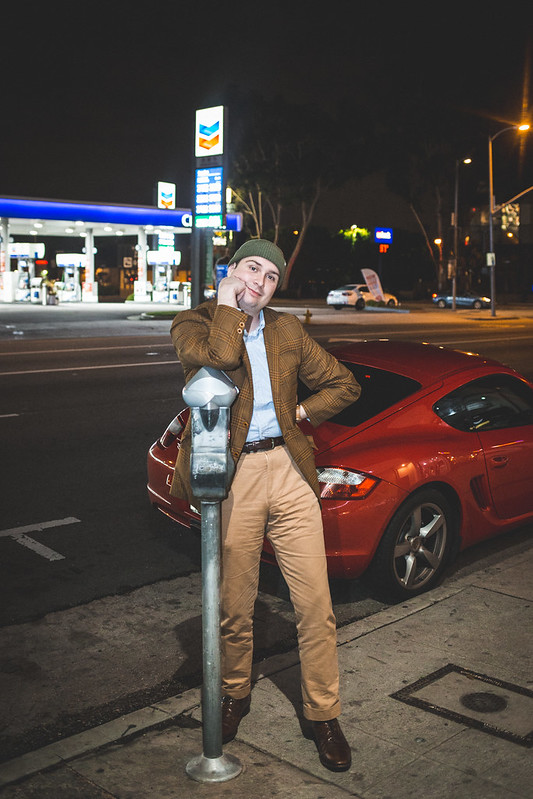 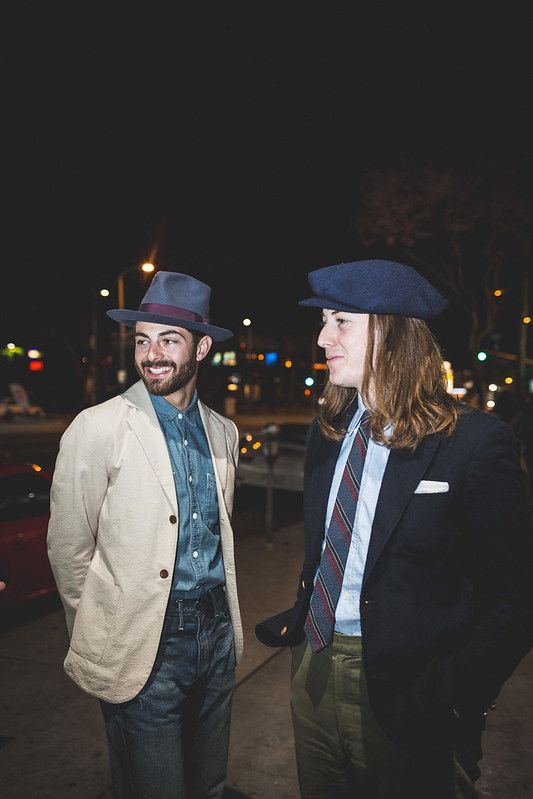 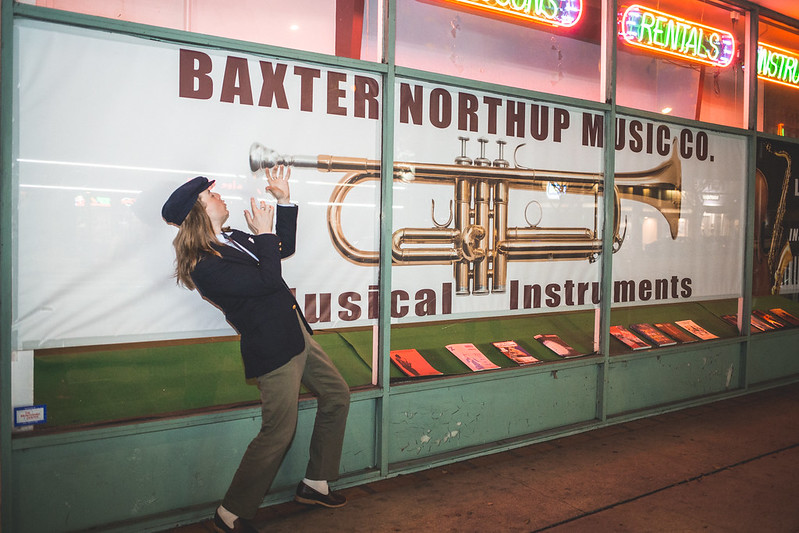 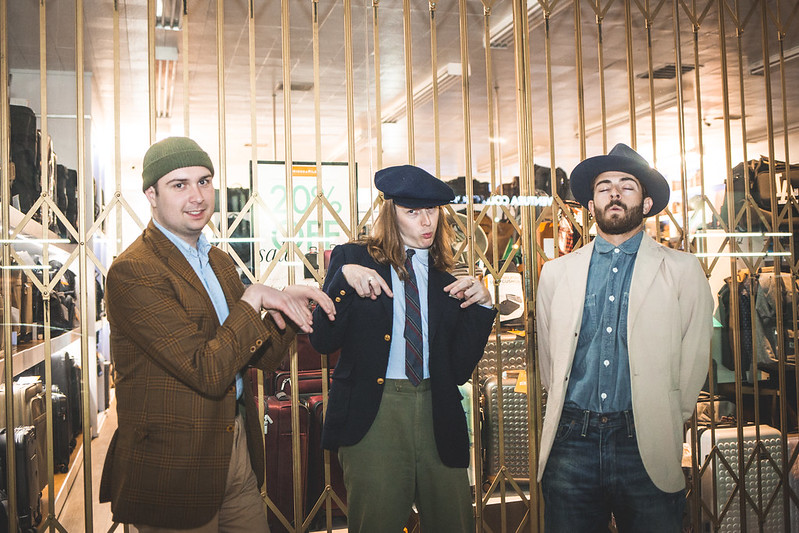 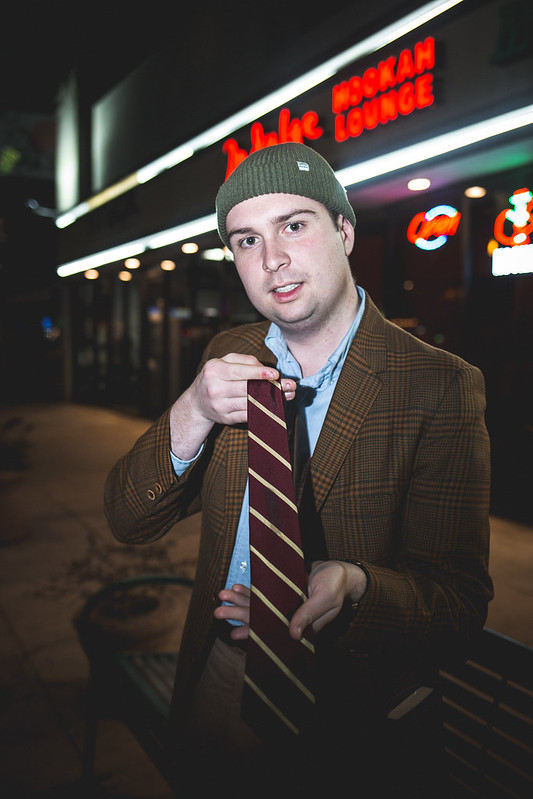 Spencer’s tie was a casualty during the great burger attack.

The Gooch Brothers are really great guys.  Not only do I consider them menswear friends, but I also think of them as legitimate friends I can hang out with.  It may not sound like a big deal, but it really is, considering how much I’ve felt left out of the menswear world.  We can talk about Drake’s lookbooks, vintage belt backs, and the latest episode of Comedy Bang Bang (or our favorite obscure lines from The Office).  I think that’s what makes us being menswear friend’s even better; we’re all just regular dorky guys who like great clothing.

Even though Josh will be leaving for his world tour with Shania Twain, you can keep up with him on his instagram.  Garret will still be here in LA,  bringing brands together for the Gooch Collective, modeling, and continuing to build Ziggie an e-commerce site for ethical brands and causes.  Plust, they have wicked style.

Be sure to follow the Gooch Collective to find out when the next event will be.  And don’t forget to listen to the podcast!  If ya’ll gave us a review, we’d really appreciate it.