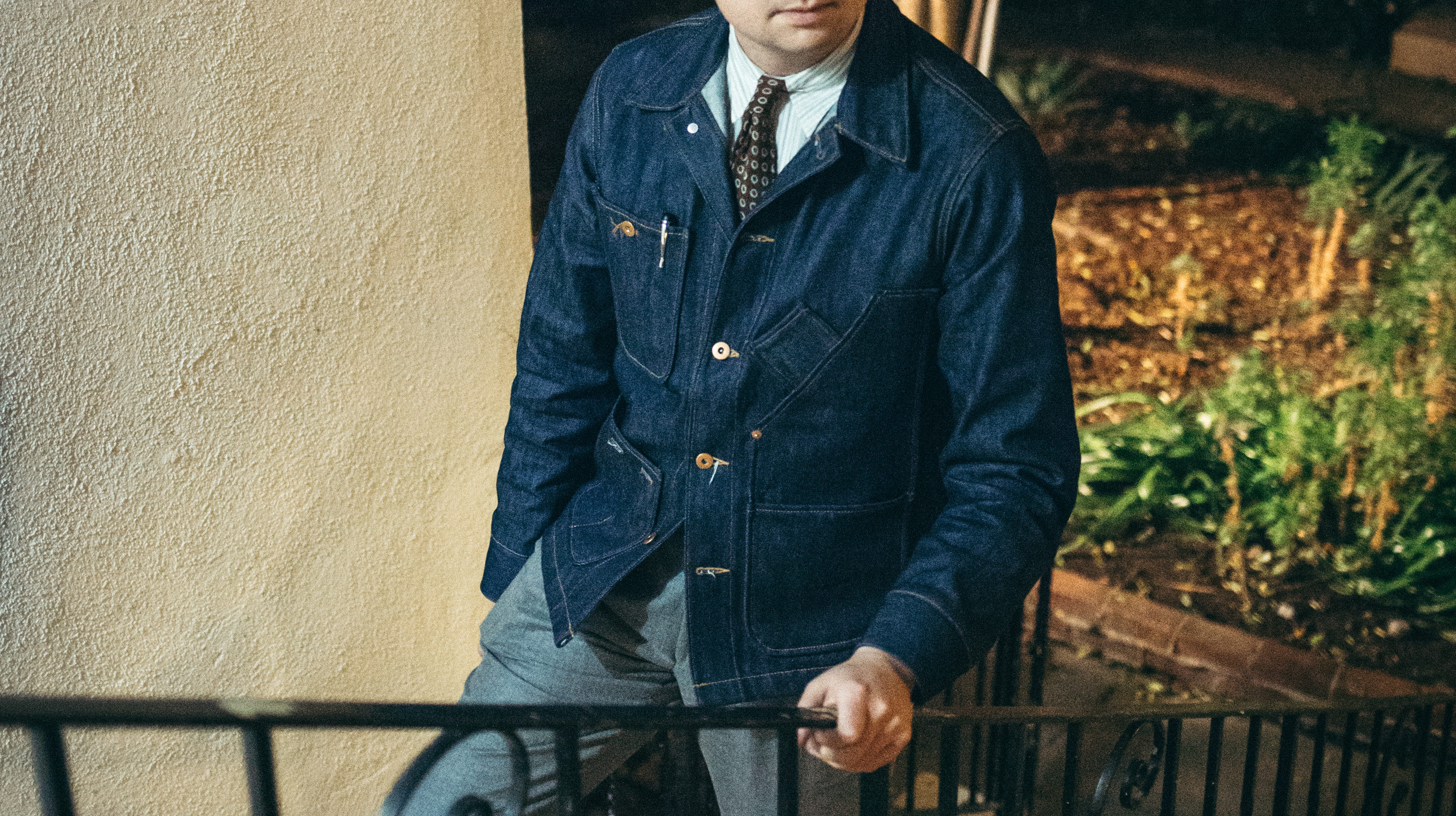 Time to get dangerous with denim.

For years, I have wanted a denim jacket. It is a classic piece of  casual outerwear, with the same rugged vibes of a leather jacket- only much more comfortable to wear in the semi-desert climate that is Southern California. However, none of the denim jackets I came across ever stood out to me- and those that did were usually out of my price range. So even if I wanted it, I never owned one.  That is, until I discovered the coverall jacket. 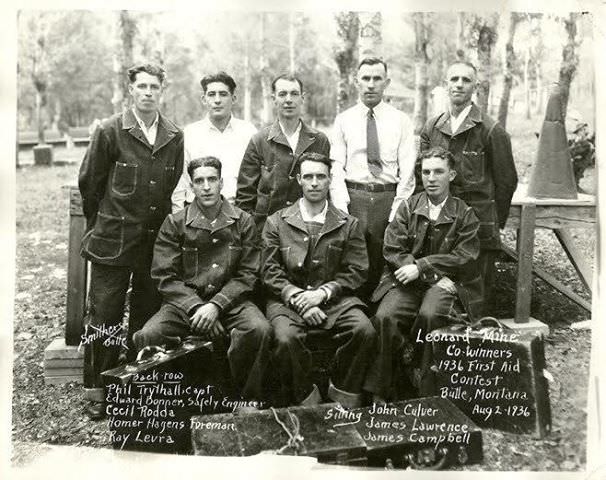 One thing that drew me to this piece is that it’s cut and designed like a chore coat, rather than the traditional trucker jacket that most guys wear.   This means it ends past the waist and can be worn over the top layer of an outfit (hence the name), for added protection.  One major draw is all the pockets it has, some having three like typical chore coat with others featuring quadruple patch pockets or even much more interesting pocket designs.

It’s a pretty classic piece of casual outerwear that isn’t as meme-worthy like the Carhartt chore coat or as basic as the trucker.  Think of it as the much more rugged counterpart to the Drake’s overshirt that seems to be catching on lately. 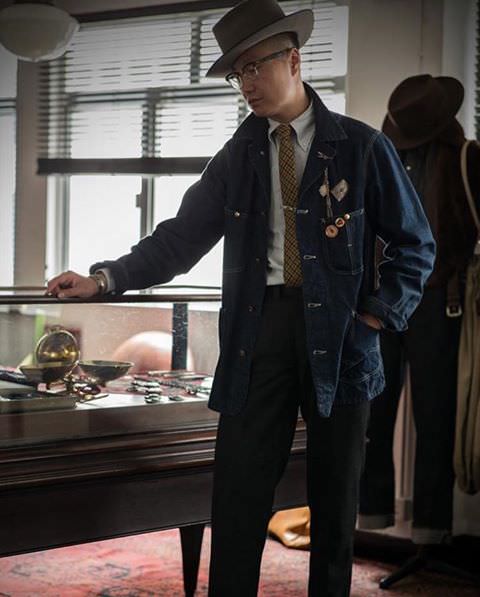 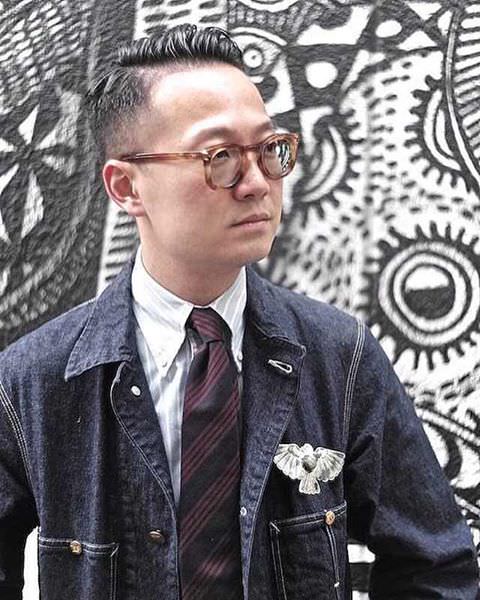 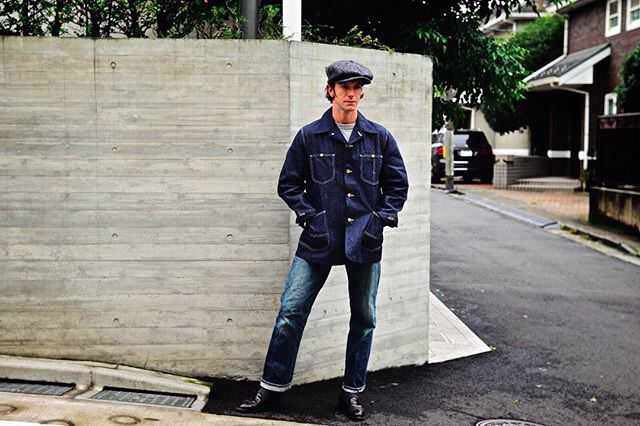 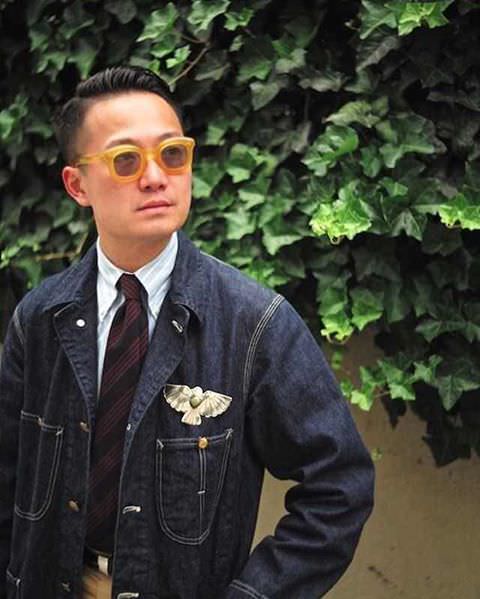 Ethan newton in a vintage one. 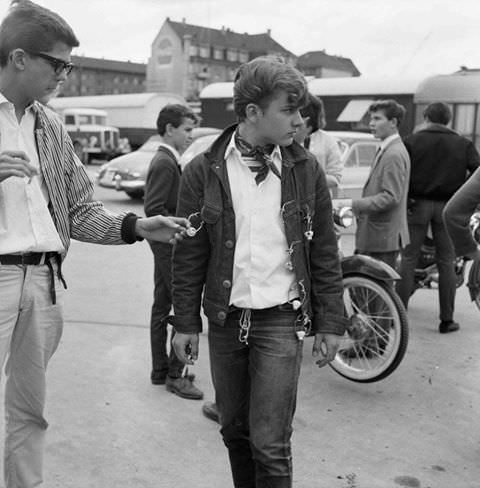 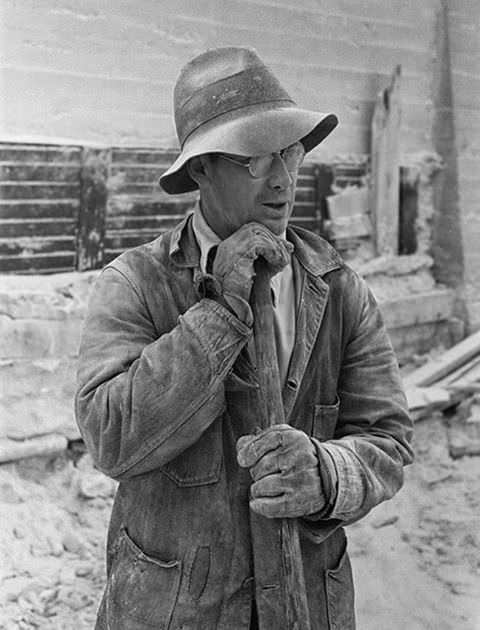 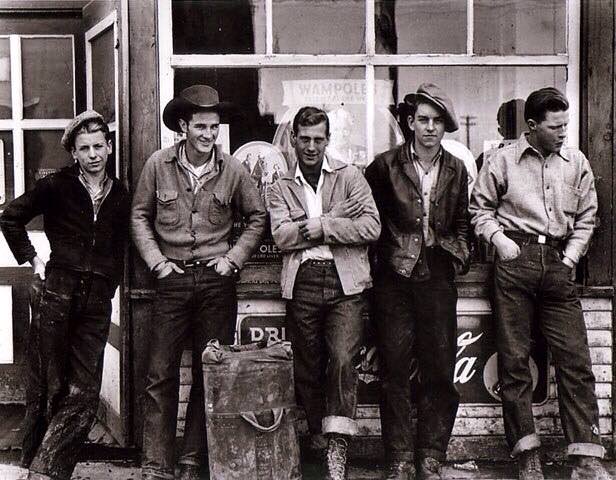 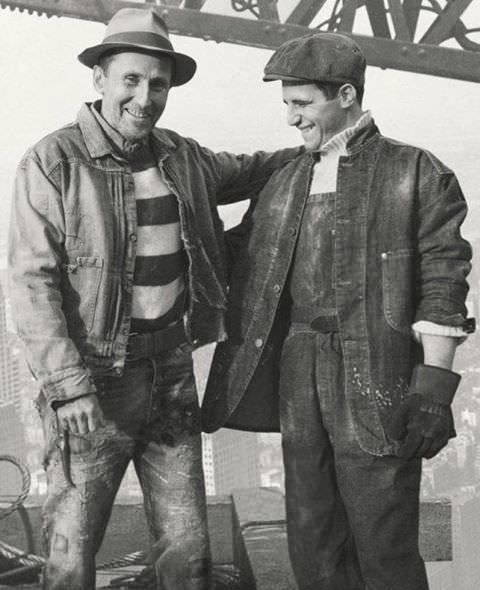 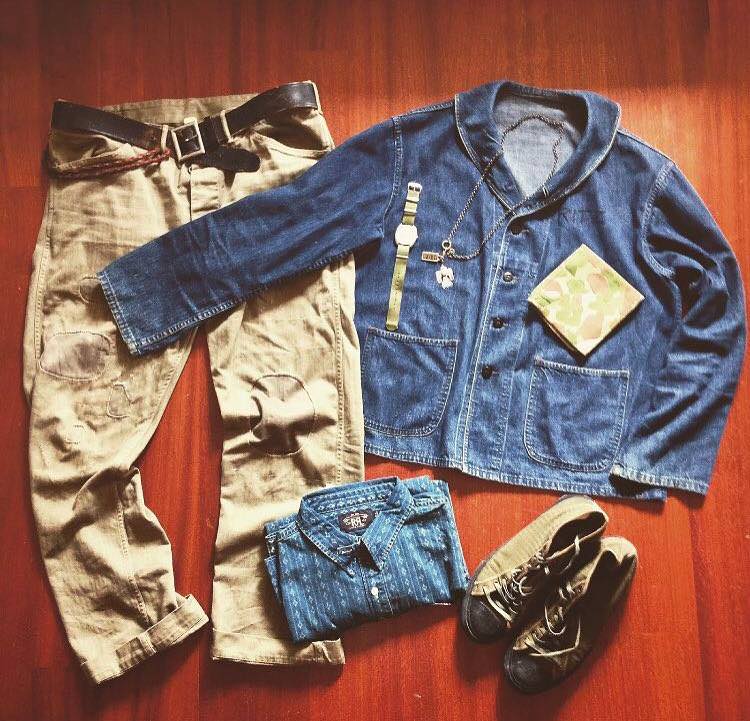 At Inspiration LA, our friend Trung mentioned to me the Tellason Coverall jacket. It had a few details that intrigued me, like a specialized pen pocket, as well as one meant to hold newspapers. I study journalism, so I judge jackets mostly by how many pockets I have to jam notebooks and tape recorders in, so in that department, Tellason already got a few brownie points in my book.
In terms of overall design, it’s pretty much similar to the Bryceland’s denim jacket (which itself is a copy of an old Lee jacket).  Kenji and Ethan always make a great case of pairing workwear pieces like this one with traditional tailoring, which is why they’ve been such a huge inspiration on the blog lately.  The stock jacket is made from 14 0z non-selvedge denim (from the defunct Cone Mills), though they make an actual 16.5oz selvedge one as well as a fun turn of the century design.

A few days later, I looked it up and saw that the price was pretty reasonable- especially since my birthday was coming up and I could expect to have some extra spending money. It was definitely really tough when I first received it, which is why I set out to wear it as much as I could. 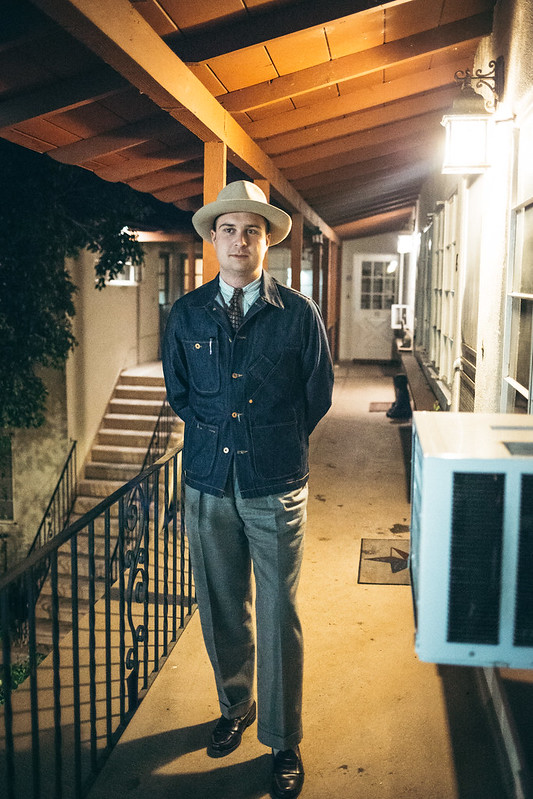 These pictures were taken while Ethan and I were hanging from the Gooch Brothers- I had just come from work and decided to swap my sport coat for the Tellason, and borrowed Ethan’s western fedora for an extra dose of that Brycleands flavor that we all crave.  The shirt is a multi-stripe RRL spearpoint, which gives off some subtle workwear vibes,  paired with a ’50s English foulard, the mandated Street X Sprezza uniform. 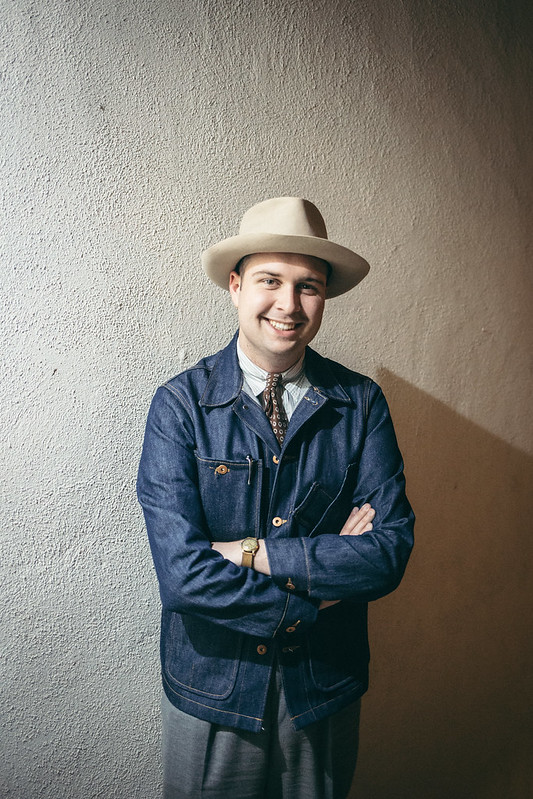 I kept things casual with a pair of penny loafers and white socks. Here, I was wearing a pair of Brooks Brothers trousers with some pretty cool details- forward pleats, a button flap coin pocket. However I think the outfit would benefit from a pair of darker trousers with a slightly slimmer cut. There’s always next time. 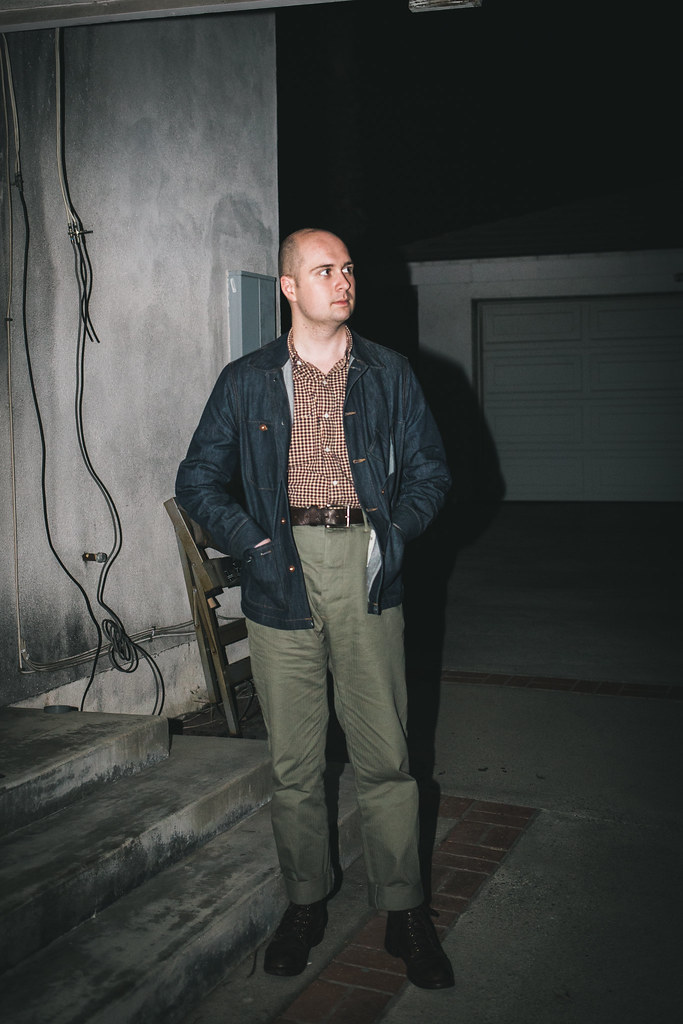 One of the reasons it took me so long to get a denim jacket was because I wasn’t sure what pants to wear with it. I know the Canadian tuxedo can be pulled off pretty easily, but that usually requires the denim to contrast (although, I know plenty of guys who rock it regardless). This problem was solved when I got a pair of reproduction WWII herringbone twill (HBT) trousers. After slimming them down significantly, they’re the perfect casual alternative to jeans! Expect a blog post about these soon-ish.

I wore it with an RRL western shirt and Chippewa boots for an easy vintage workwear look.  We’ve found that vintage workwear/americana is probably one of the best ways to pull off a throwback look without looking too out of place in the modern world.  Plus it’s a  lot more interesting than just wearing a tee shirt and jeans! 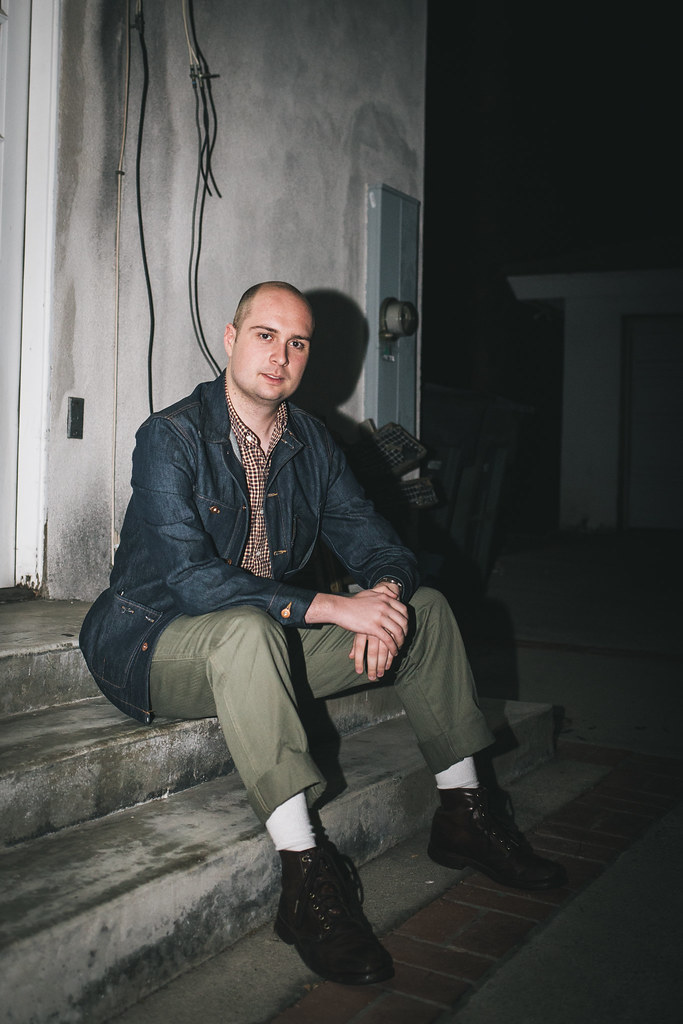 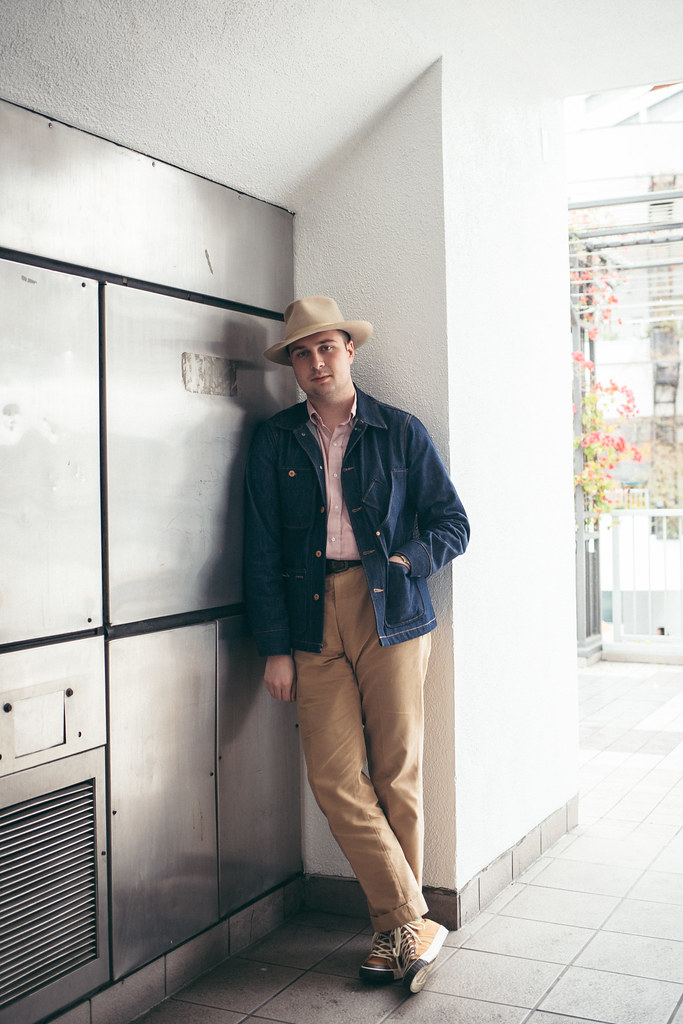 This outfit is pretty similar to what I wear when I’m on assignment or have work right after class- a pair of chinos with an OCBD and casual outerwear jacket. It’s a nice of ivy and traditional workwear elements (hello 2010 menswear), which is basically my contemporary style in a nutshell.
There’s that hat again! I don’t actually wear fedoras that often, but that day I was modeling for Colchester Rubber Co. and they requested that I wear one of my “cool hats”.  It’s actually in Ethan’s collection, but even he doesn’t wear it often. 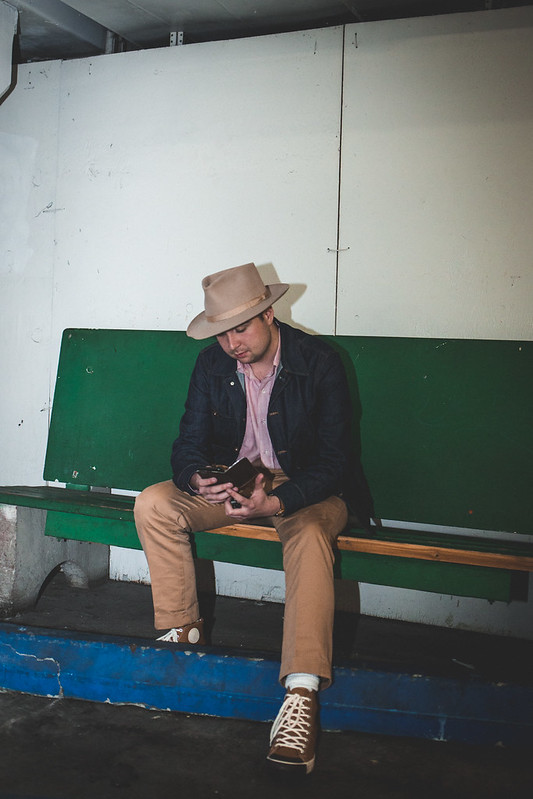 When I was putting this outfit together, I originally went with a blue university stripe OCBD, but in retrospect I prefer how it looks with red. It plays well with the khakis and sneakers while giving some contrast to the jacket.

After a long time searching, I finally found a great denim jacket of my own that wasn’t one that you commonly see.  Not only is it versatile, but it’s a piece of workwear that is uniquely suited to my work as a student reporter!  Fashion can be utilitarian too.

In Spring and Summer, I’ll get plenty of chances to wear this at night, and when the temperatures begin to drop again, the Tellason becomes a great layering piece. I can’t wait to see what this jacket looks like as it continues to get some wear and break in.