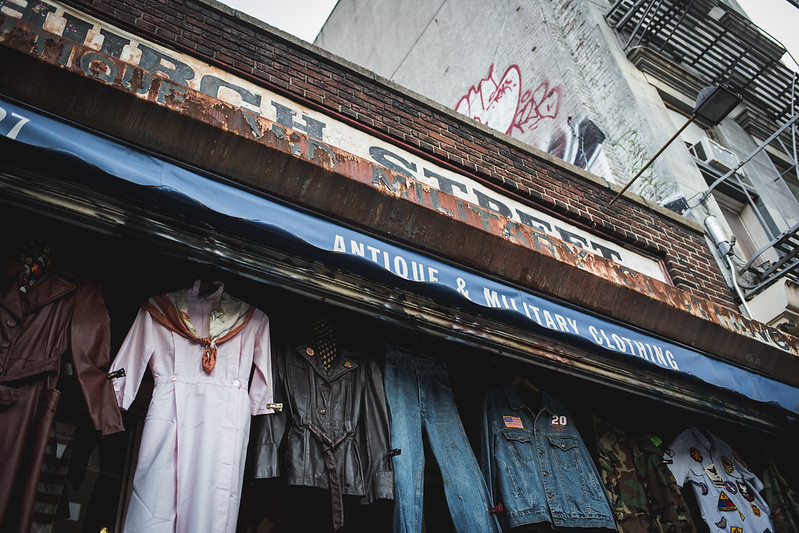 We did so much in NYC that I had to give the vintage stores their own post!   It’s not really a guide, but we can really recommend that you check these places out if you’re in NYC. 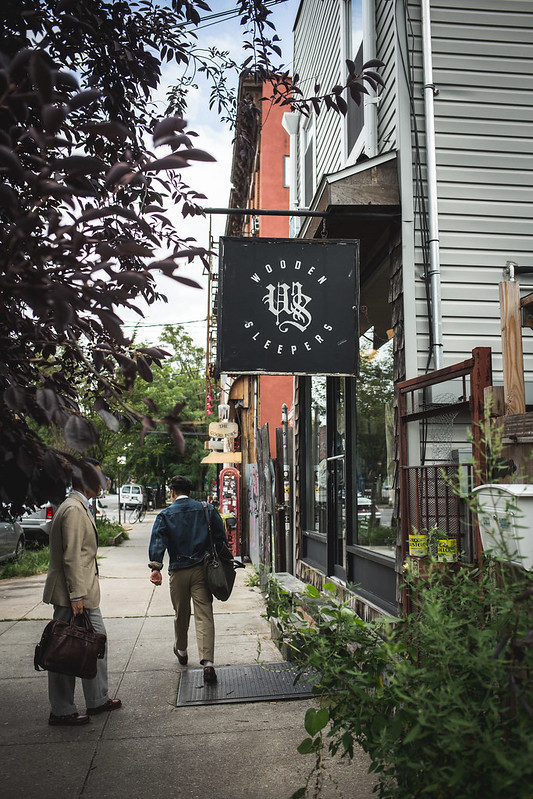 I don’t really remember how I stumbled onto Wooden Sleepers.  I don’t use the explore function on instagram, so I must have seen a friend actually stop by and tag them in something!  I definitely recall showing Spencer and we were both hooked on the rugged workwear-Americana vibe that the store had.  It’s one of the more recent vintage vibes that we’ve picked up, no doubt thanks to attending Inspiration LA and hanging with the Gooch Bros.

As we made a point to go to Brooklyn during the NYC trip, Wooden Sleepers was a must see place; we didn’t mind the awkward bus ride to Red Hook.

Read this article from PTO to learn more about Wooden Sleepers. 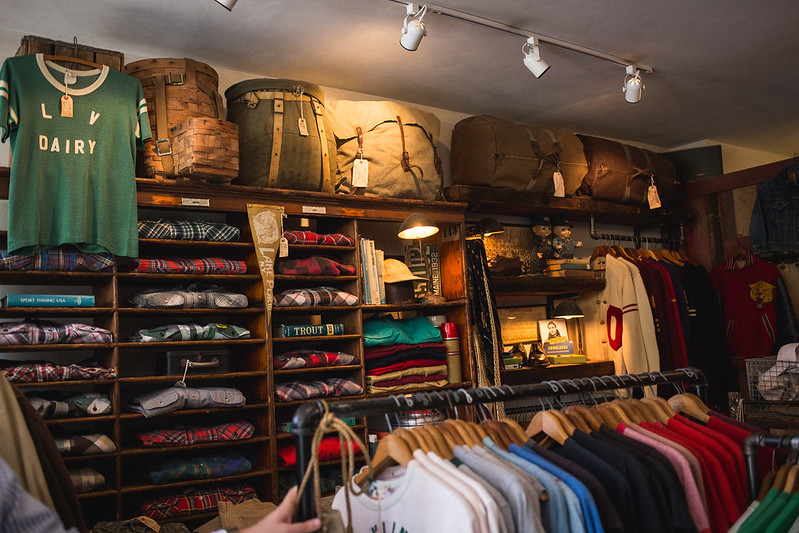 The store was small, but filled to the brim.  On one side, you had a cool cubby-shelf filled with vintage flannels.  Plaids of all colors were bound to make you yearn for colder weather.   Next to it was a rack of hearty work jackets, most of them camo and made of a heavy canvas.  A top the shelf were vintage bags, all of which I wanted but didn’t really have a need for. 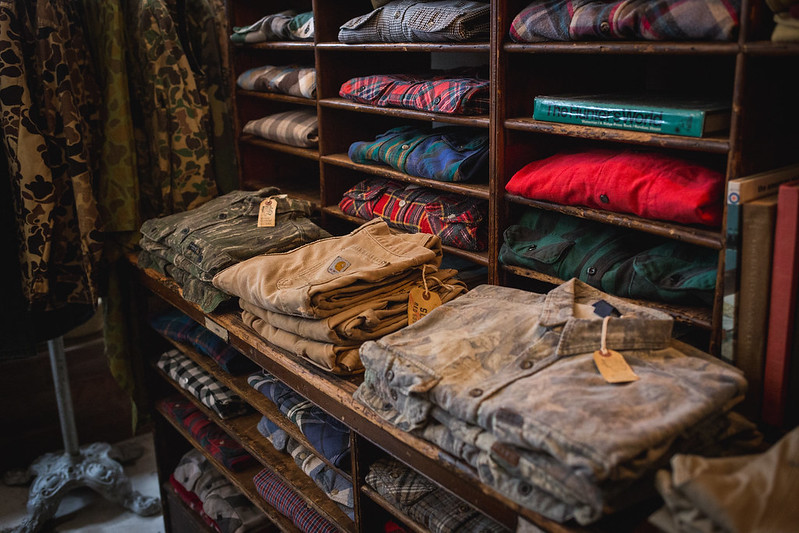 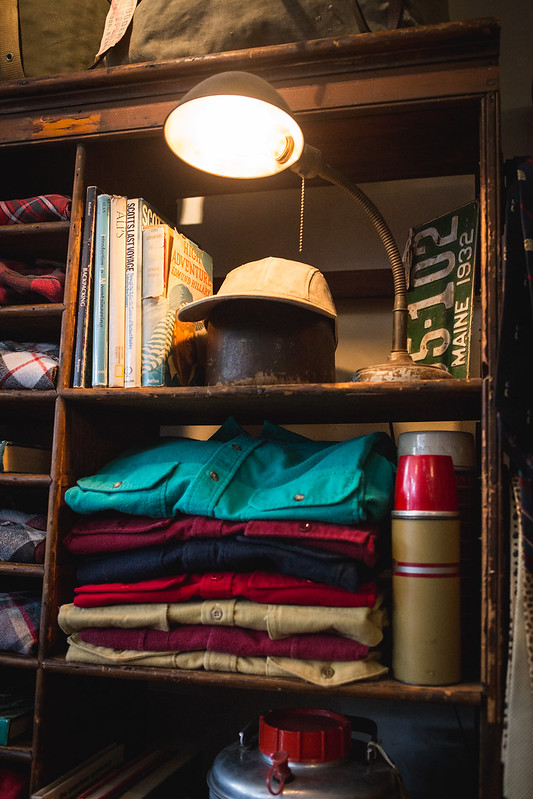 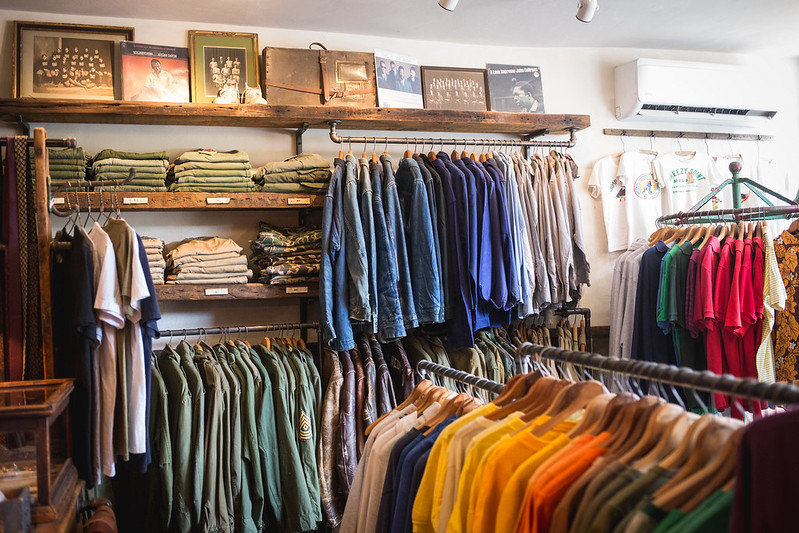 On the other side were more lightweight pieces. A good section of chore coats and chambray shirts filled the top while military jackets (including leathers) adorned the bottom.  A regular assortment of chinos (which are always stocked well) were a good site.

Apart from these mainstays, the store had a few sections for Levis XX denim, vintage polos/hawaiians, shoes, and ties. 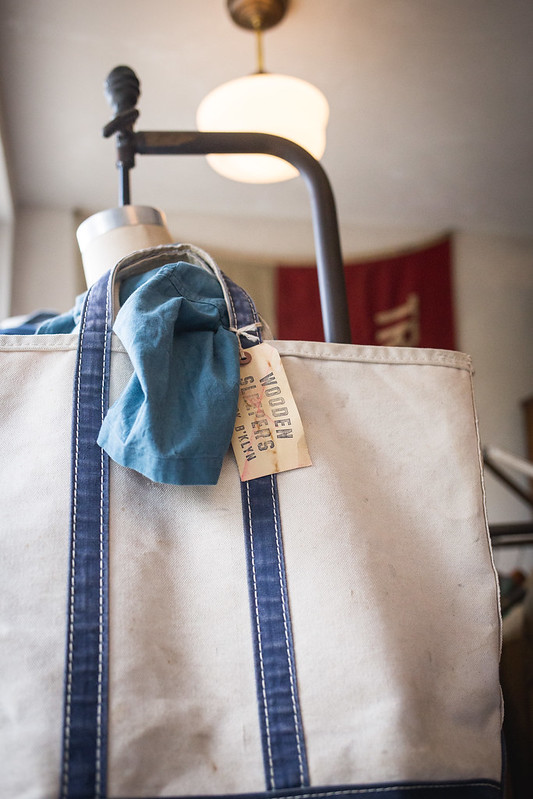 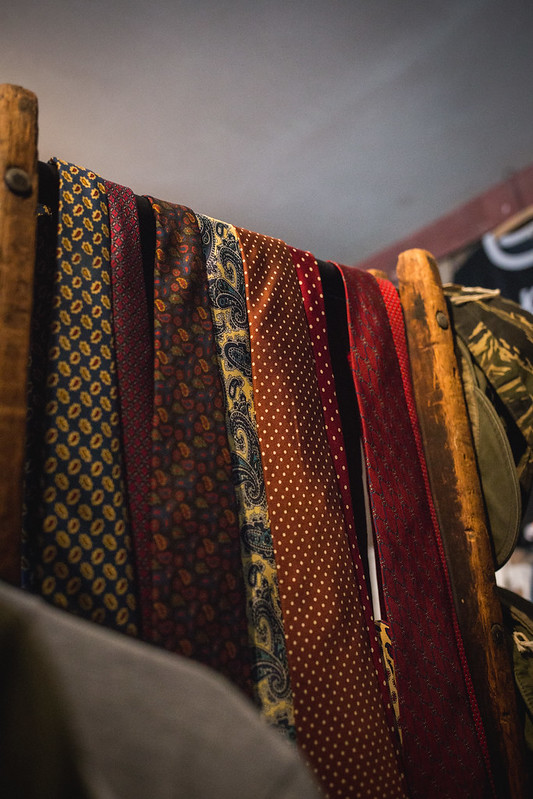 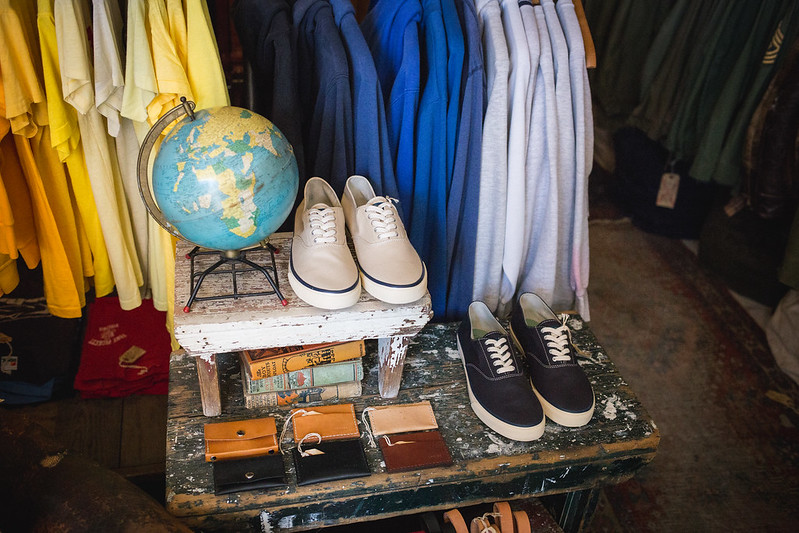 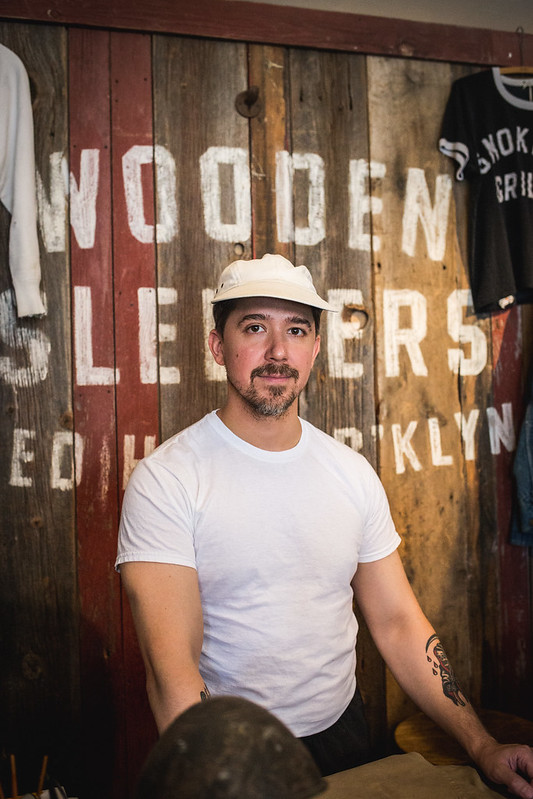 Even though we didn’t get anything, it’s still a great store.  Everything there would really work for my latest attempt at casual style, like cropped military pants,  selvedge denim, and work shirts.  I’m sure that if we were there long enough, I would’ve definitely bought at least a chambray workshirt, since I don’t really have a vintage one!  Brian was very friendly and told us that we needed to come back when it’s fall-winter, so we can check out even more stuff 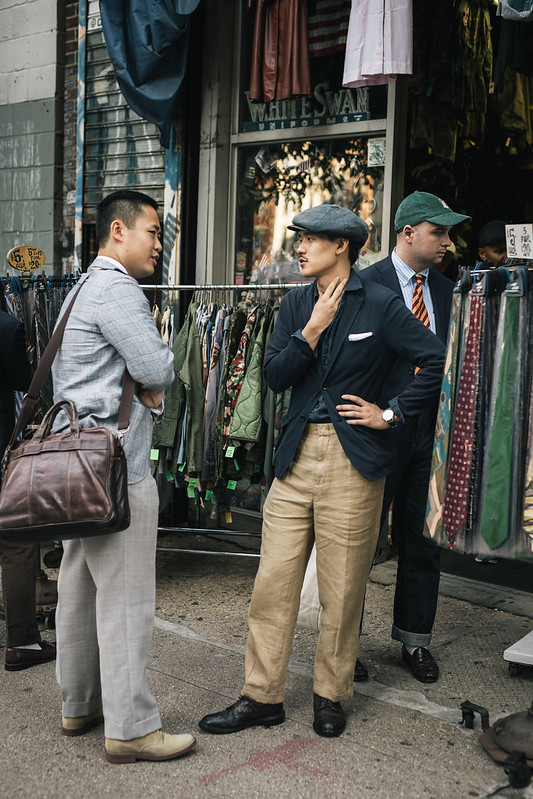 Church St. Surplus in Manhattan was a quick stop when we were hanging with Raymond Chu.  It’s a cool spot that focuses more on military wear (so think Wooden Sleepers), but there are a few cool finds.  You’ll find their deals outside, with tees, vests, and ties for dirt cheap; I’m sure the best stuff is either picked early or only found inside with their own price.  Honestly, I wasn’t expecting too much when I first got there, but I was pleasantly surpised on the inside. 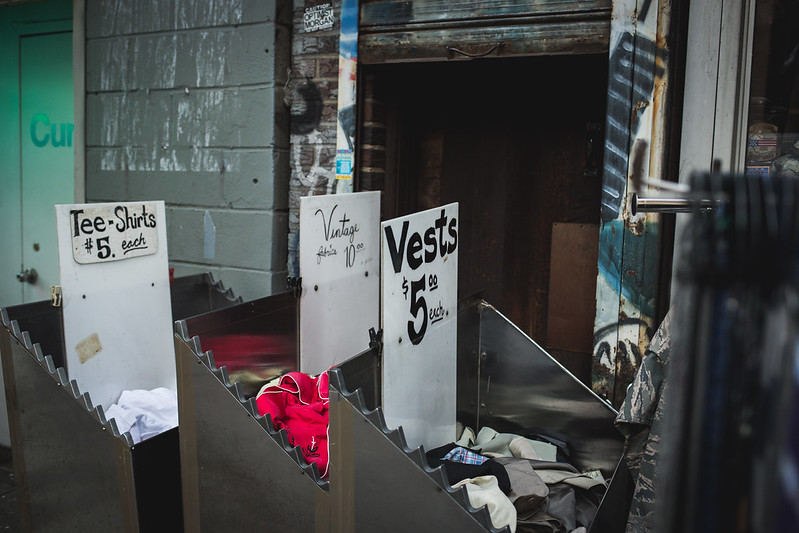 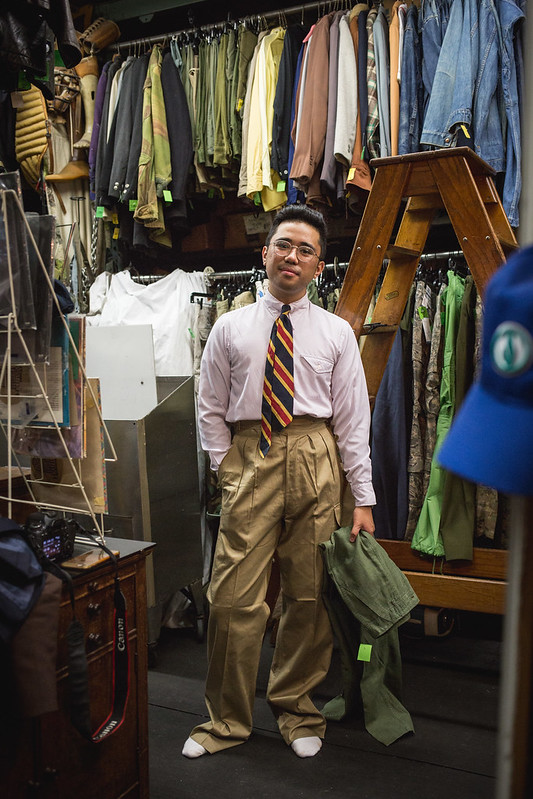 Authentic gurkhas that were too tight in the waist with nothing to let out.

There is literally long racks of clothing (for both men and women) that bring to mind a mini version of Roxy’s Vintage Deluxe, a film wardrobe warehouse only open to few.  Denim jackets, sport shirt, and a plethora of militaria fill the space, with simple tags notating the garment and the price.  We only had about 30 minutes before they closed, so we made sure to go through as much as we could and try on anything that we thought would fit. 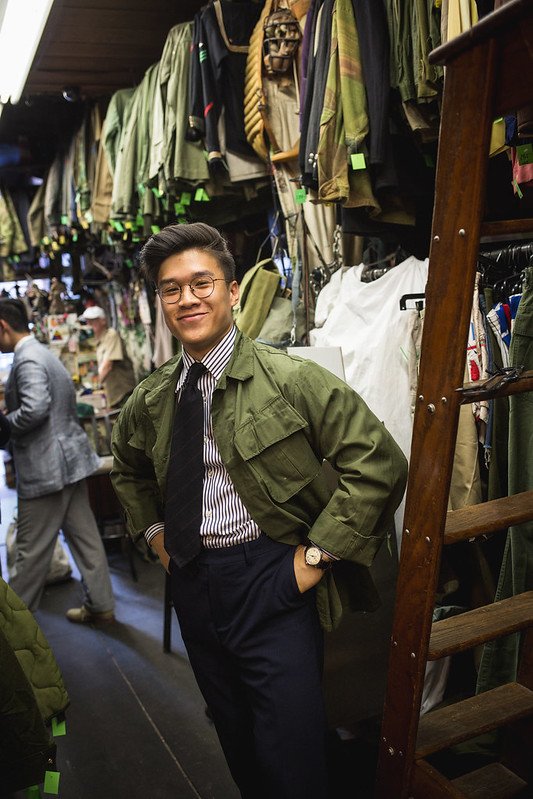 Trung wants a jungle jacket after reading our article on them. 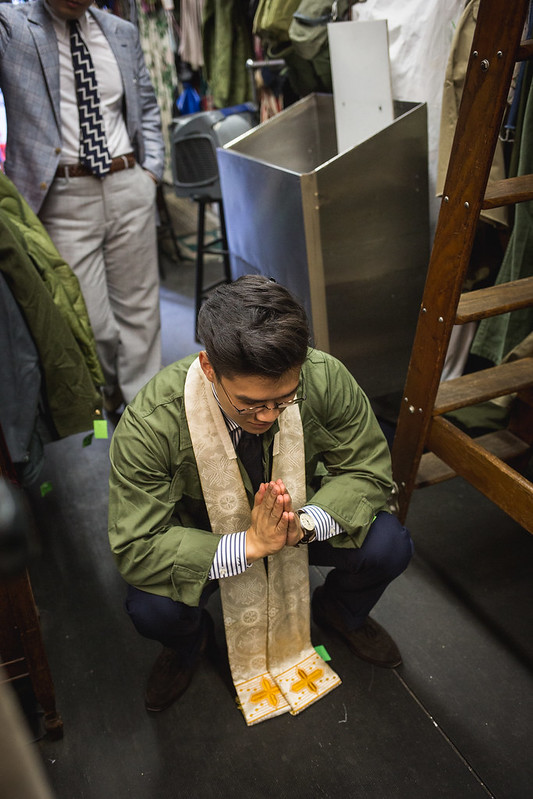 One of those reverend scarf things.

I walked out with an almost-deadstock pair of 1960’s olive military chinos. 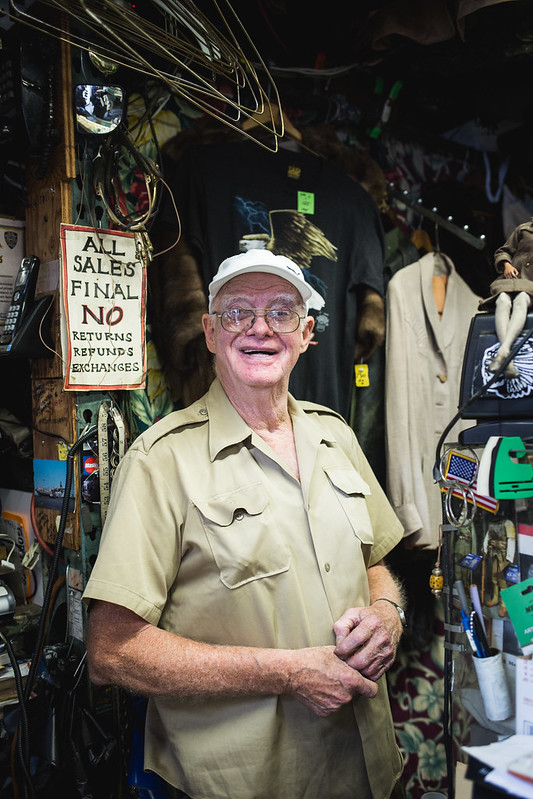 Label, the owner and founder.

If you prefer the LA way of going through a packed store to pick your vintage, then this is the place for you. A lot of the NYC vintage people said that this store was filled with much more menswear instead of mainly being military/workwear (which is the current trend).  I didn’t find anything I liked other than these chinos and the sadly-too-small gurkhas, but Aldous did find a nice polo coat which unfortunately was too short in the sleeves.  Considering the store, I’m sure that Church St. Surplus gets plenty of “new” items each week! 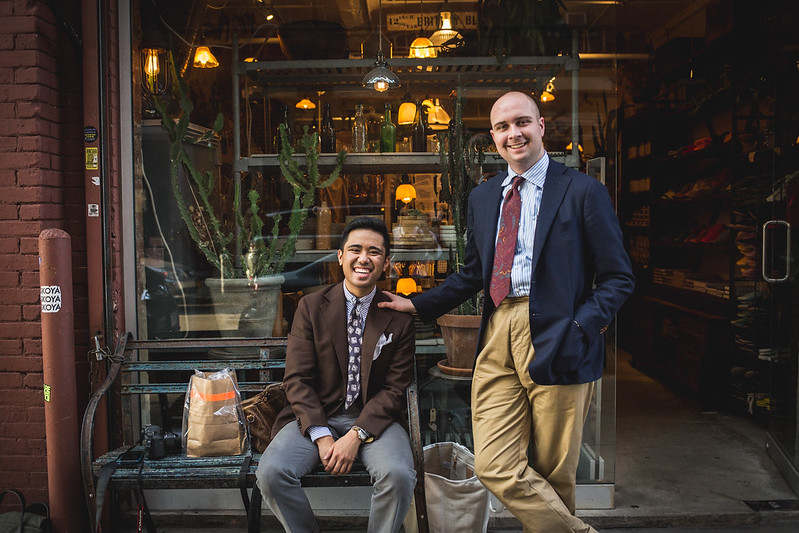 Front General Store is close to DUMBO and was heavily recommended to us by almost everybody.  By this point in our Brooklyn adventure, I was dying of sweat so I didn’t really take a lot of pictures with my camera.  Hell, some of the guys just stood outside because they didn’t have any AC!  I’m glad I went in however, because I found some cool shit.

The entire men’s section is in the back, again filled with a bunch of the usual military/workwear stuff but there were some cool gems!  They had a modest selection of fedoras and a bit more variety in shirts (think more dress shirts than loop collars and chambrays).  They also had the best selection of jackets, with sukajans, cord work coats, and leathers.   I ended up grabbing a green OCBD that was on sale, that I can’t wait to wear with layers in the colder months ahead. 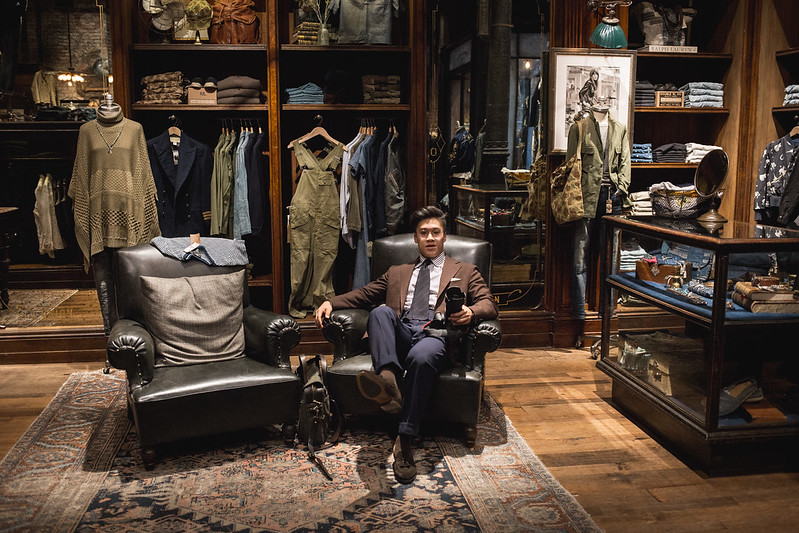 Okay, RRL isn’t a real vintage store, but I couldn’t find anywhere else to put this.  At least they make pretty damn faithful reproductions of vintage right?  For those of you who don’t know, RRL is Ralph Lauren’s vintage wing. He was always a big fan of 1930s style and created a whole brand just to make his own version of vintage aesthetics, ranging from denim and leather to full suits.

You’ll find the RRL on Soho, which is pretty much a godly place to visit.  My only experience with the brand is from people wearing it to vintage events or through their tiny shop on Melrose.  Since California is super casual, the Melrose location only stocks casual stuff and a handful of suits; the NYC one by contrast, just blew me away. 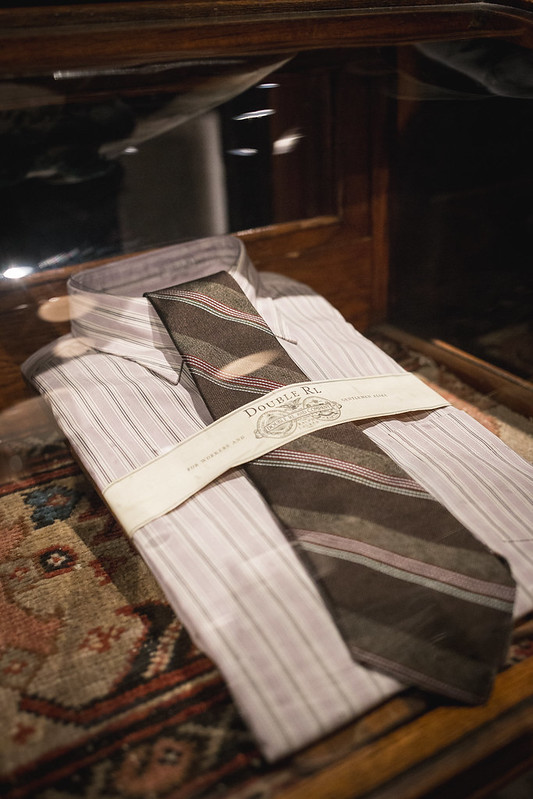 It was fantastic to see these pieces in person.  I think that RRL is the only one who really gets vintage right, apart from straight tailored reproductions and SJC.  For example, their shirts are pale and slightly multi striped, which is exactly how they are when you find them vintage.  The jackets, both causal and sartorial, look like they’re ripped from a 1940s-1960s catalogue. Unfortunately,  they had a policy against photography, so enjoy the few frames I was able to capture.

You’ll just have to go there and see it for yourself. Or hope that these pieces hit eBay for cheap. 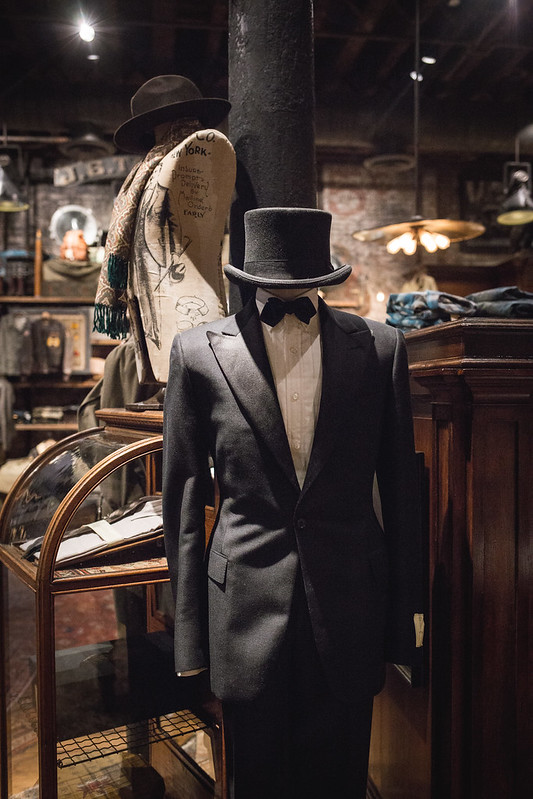 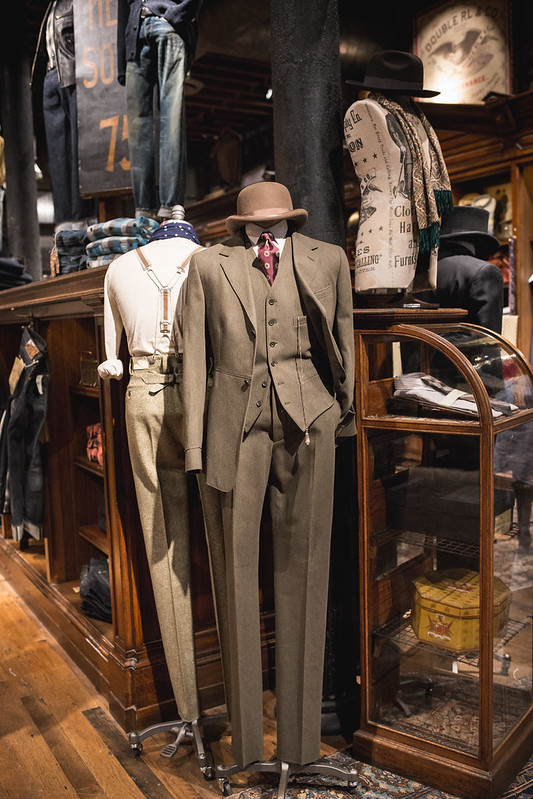 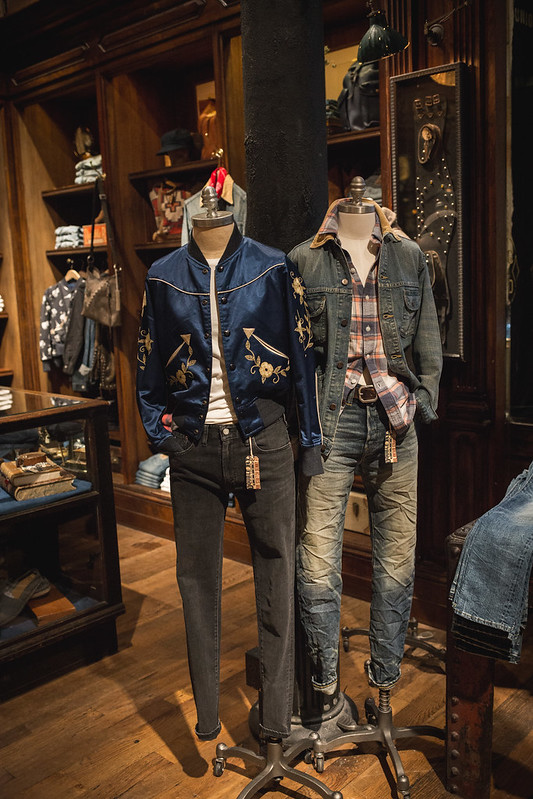 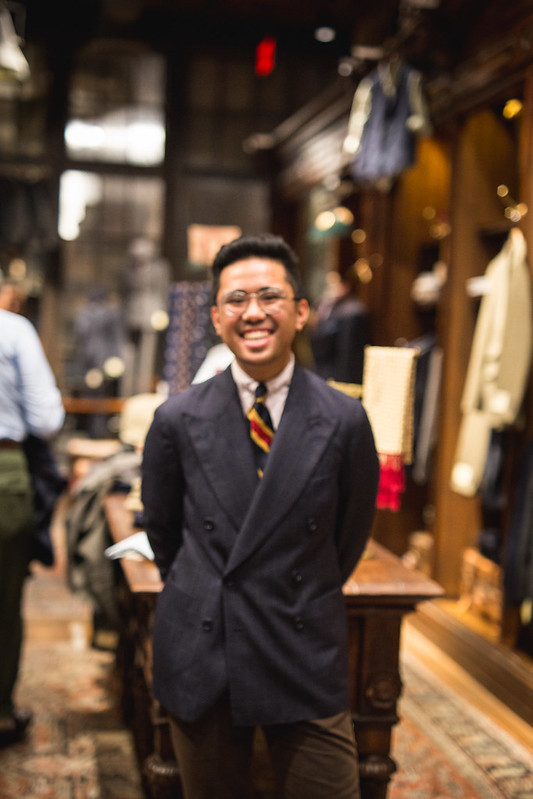 I really want to take a second to talk about a few of their jackes. I actually don’t follow RRL on instagram, so coming across these beauties was quite a surprise!

These jackets might have to be the most accurate thing I’ve seen (though I heard the trousers are lower-waisted and slim).  Like I notated in this post, there are a few details that make for a vintage DB: low gorge, wide lapels, and wide set buttons.  These suit jackets have those down pat!  Even the belt back is done correctly, being thin and located at the true waist of the garment; most do the belt too low and too wide, making it look more 70s than 30s.

Much too expensive for me right now. 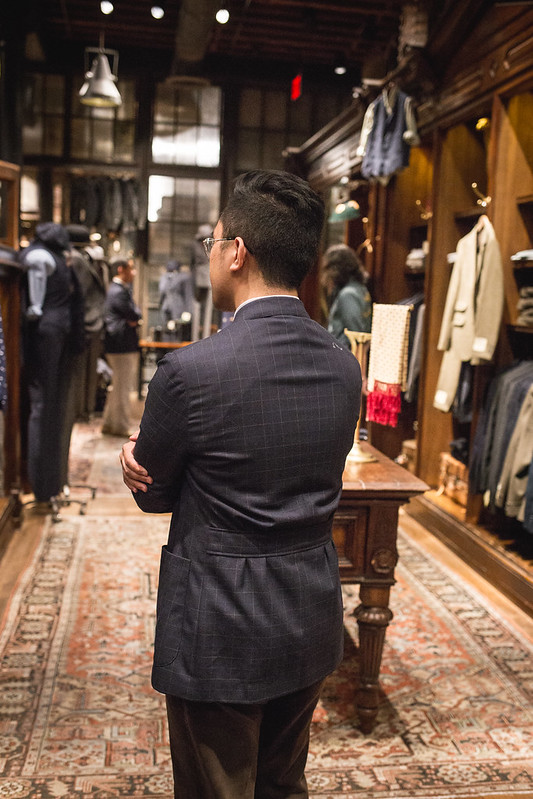 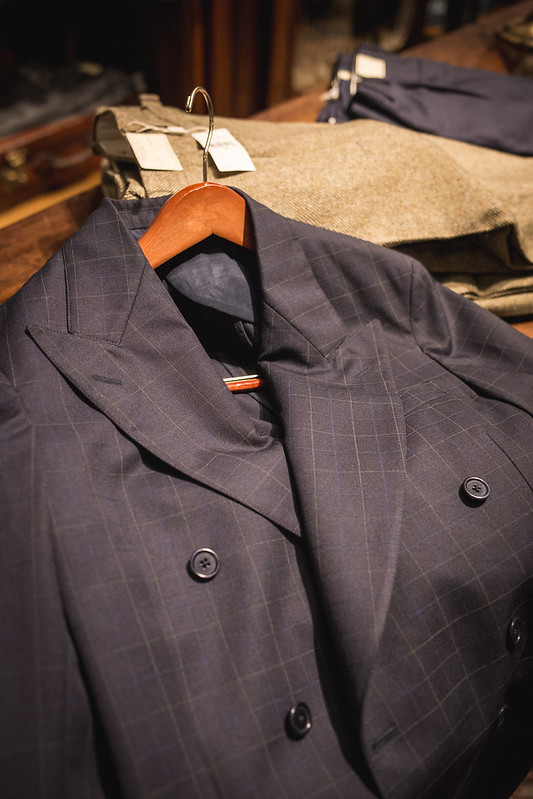 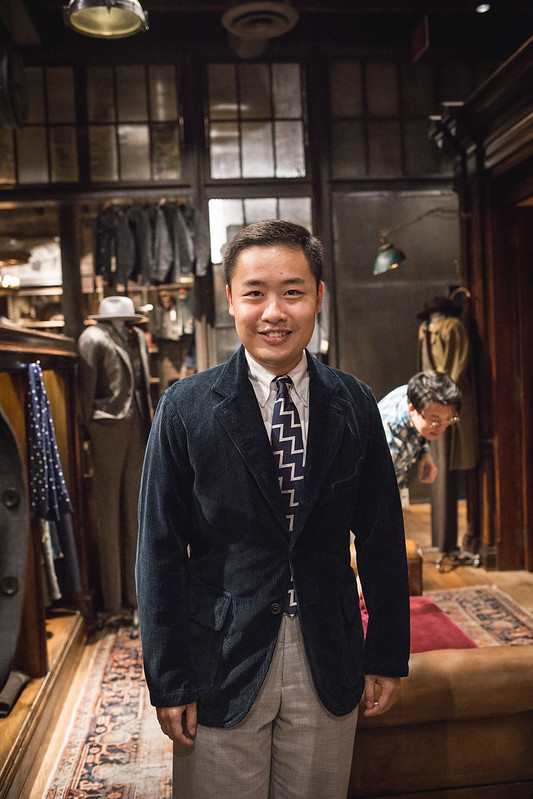 They also had a corduroy suit that was oh so good.  It’s a bit more 60s/70s in design, btu that’s okay with me! 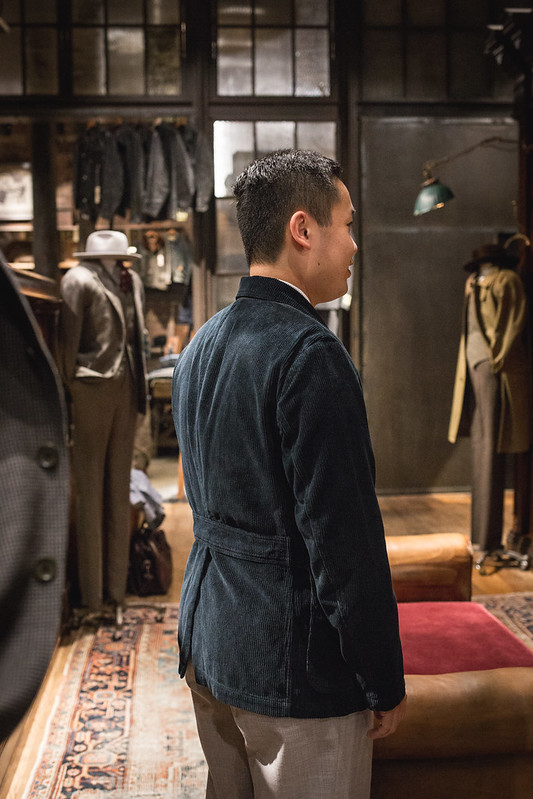 These were the only real vintage stores that the guys and I were able to go to during our NYC trip. Obviously there were a lot more (like the closing Stardust Vintage or the plethora of thriftin) but we just didn’t have the time!  Plus, we would have probably burned a hole in our bank account if we went to anymore; I’m perfectly happy with what we bought in the end.

I think that these are a must-go for anyone visiting NYC and wants some good vintage. These stores really represent everything that I like about menswear, from Americana to tailoring.  It also helps that everyone we met that worked there was helpful and genuinely interested in what we were looking for.  I can only hope that I see them again soon (and that they have new stuff for me to buy!)