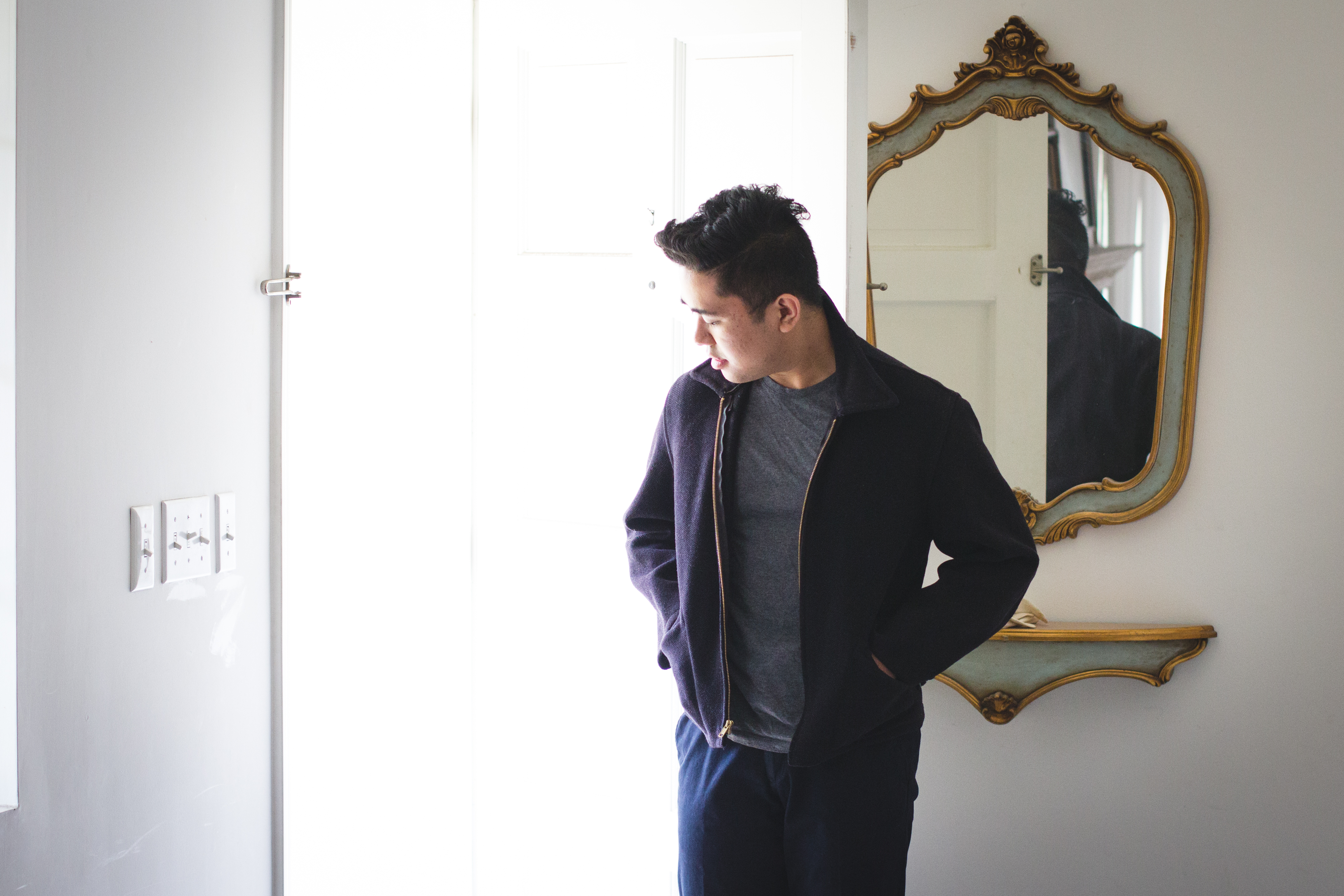 Contrary to popular belief, there are times when I get inspiration from people other than tailors, designers, and other sartorial enthusiasts.  When going casual, I often look to my friends for outfit ideas.  Thanks to MFA on reddit, I’ve been able to become friends with Matt, who is one of the best  and most creatively dressed people I’ve come to know.  He is my inspiration for this post.

Matt’s a very artistic guy.  He’s a photographer, a videographer, and an extremely stylish person.  Living in Montreal, his Instagram is filled with his work, whether its his subjects or his own outfits, taken at the threshold of his apartment balcony.  He’s been apart of some awesome things, whether its working with a fashion company or being an on-set photographer.

His personal style is everything I’ve always wanted in my casual style. He’s often wearing boots or sneakers and usually puts some form of a cool short-jacket as his final layer.  If we had to ascribe Matt’s style to a decade, it vaguely reminds me of the 1960’s.

I realize that it’s summer, but for some reason the weather has been wonky with its temperament; some days will be hot and other days cold and windy.  When creating my casual outfit, I looked to Matt’s instagram for inspiration and found these two outfits.

As you can tell, they are very similar to each other.  Extremely fitted jeans, black shoes, a sweater,  and a great jacket.  It’s definitely not as cold here in LA as it is in Montreal, but it was a great challenge for me to give off a similar vibe in my own context. 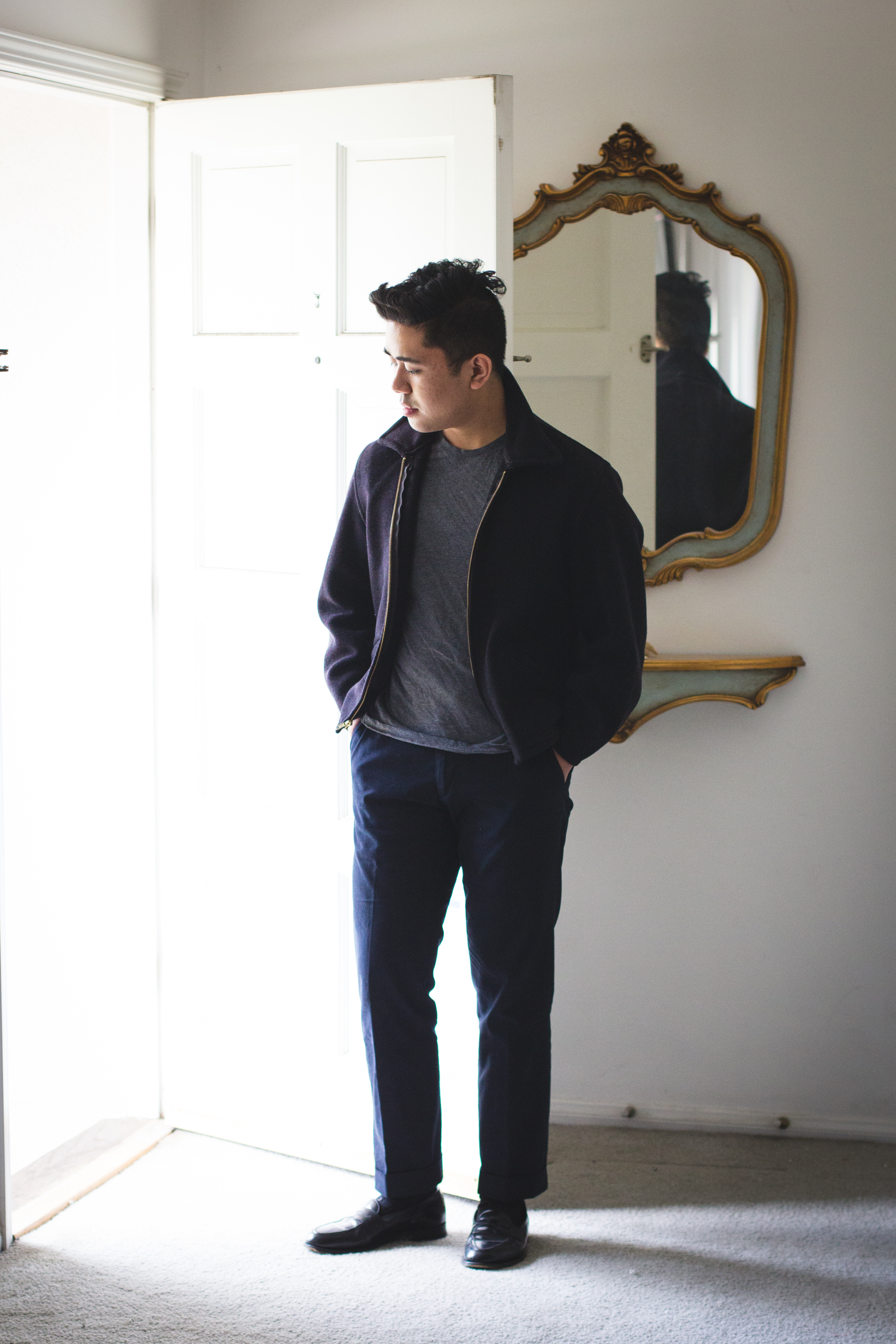 Even though it isn’t exact, you can definitely see where the influence came from.  I’m not as skinny as Matt is, so I swapped the skinny jeans for slim-straight chinos.   However, they’re still hemmed without a break, so these can still work in a casual outfit without looking too conservative.  I also swapped the grey sweater for a simple grey crew-neck shirt.  It isn’t that cold in California!

I also gotta give  Matt credit for the photography inspiration too!  Taking pictures near doors is freakin’ awesome. 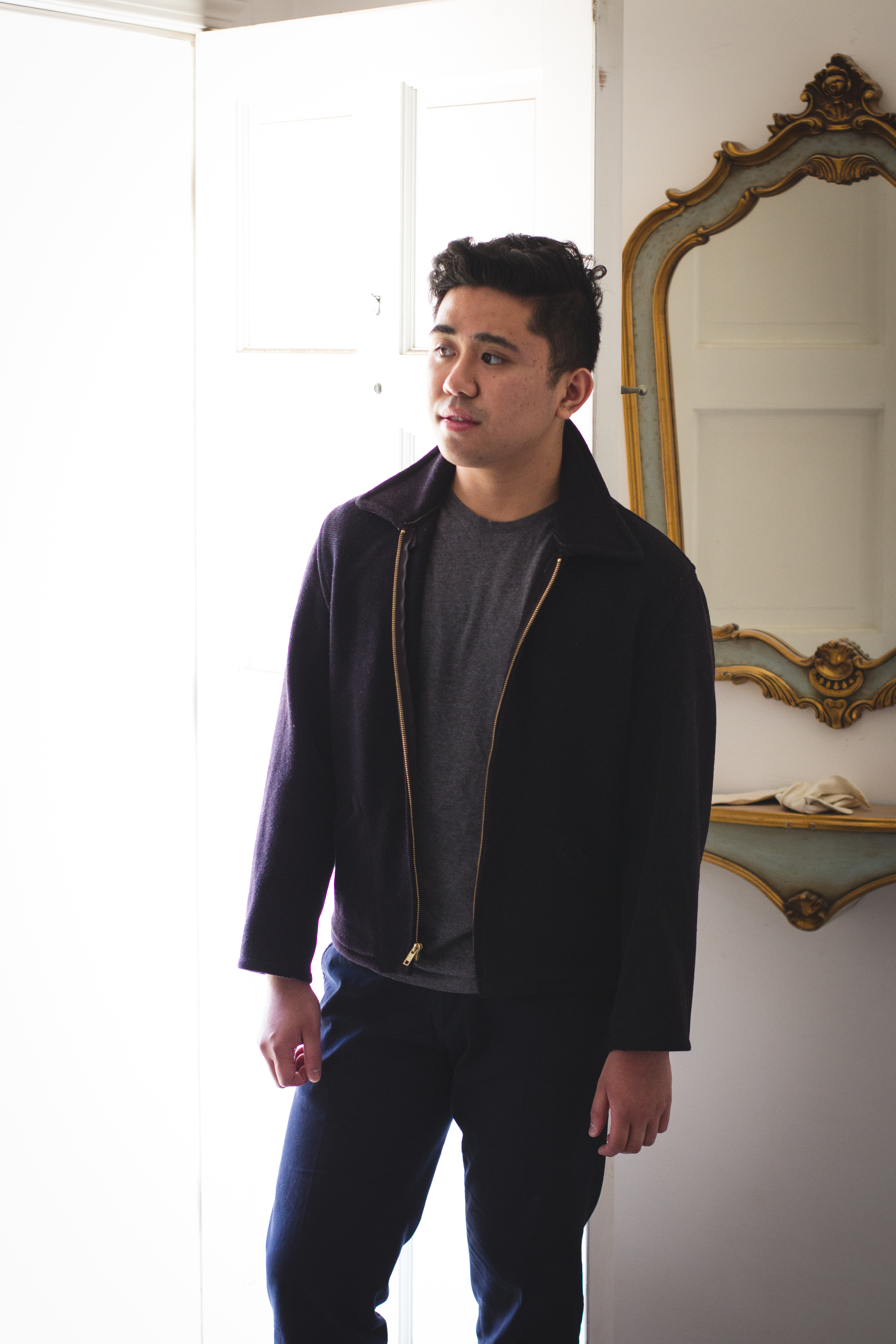 I am in love with short jackets.    This particular design has been replicated over the years and is very reminiscent of Harrington and Members Only jackets.  My jacket is from the 1940’s and is made of a much heavier wool, without ribbing, but contains awesome side adjusters.  When I bought the jacket years ago, I heard that this jacket was used in the navy.  I don’t believe it, but I wouldn’t be surprised if it was used at a shipyard or so due to its warmth.  It’s a perfect layering tool for those chilly spring nights, when they seldom happen. 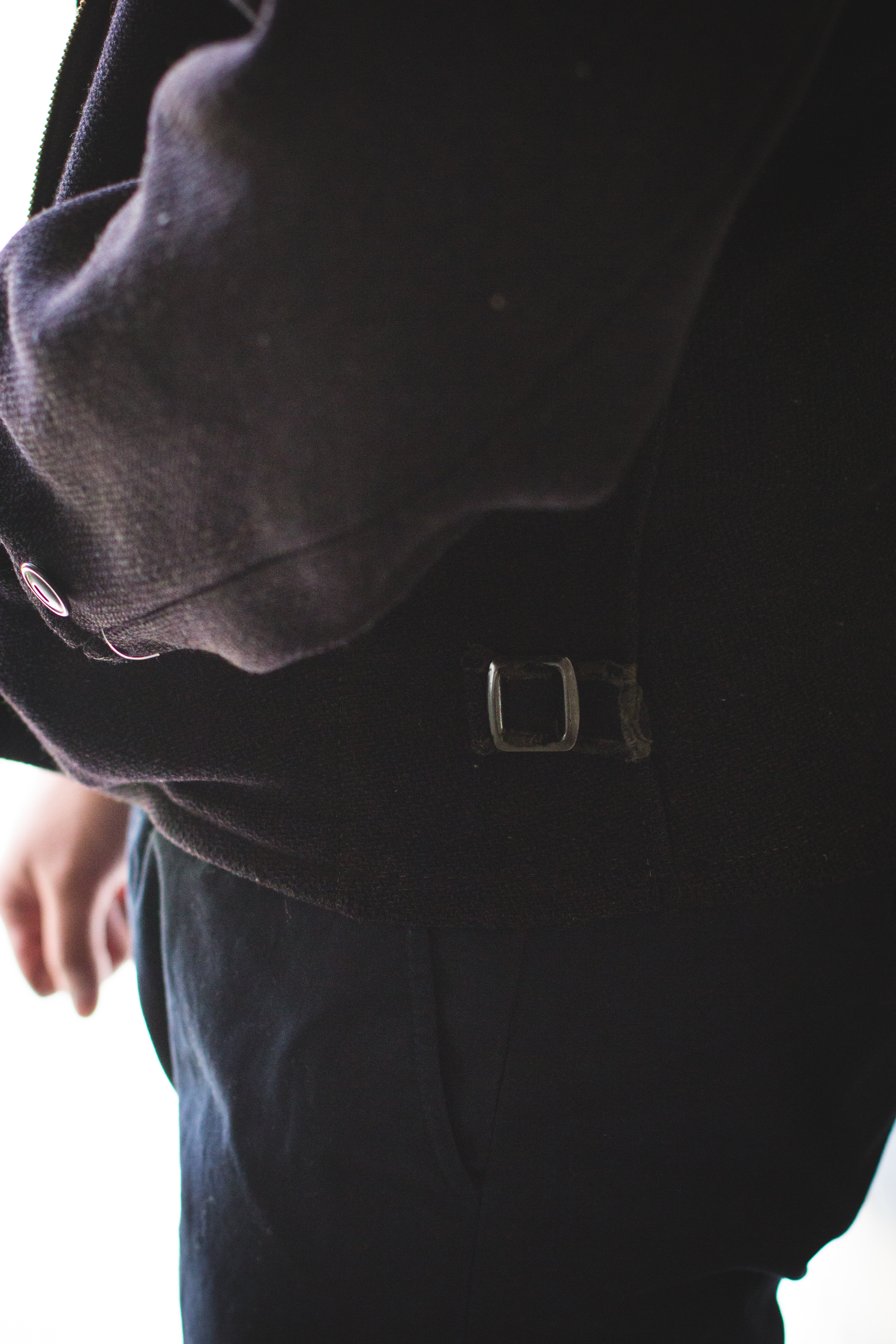 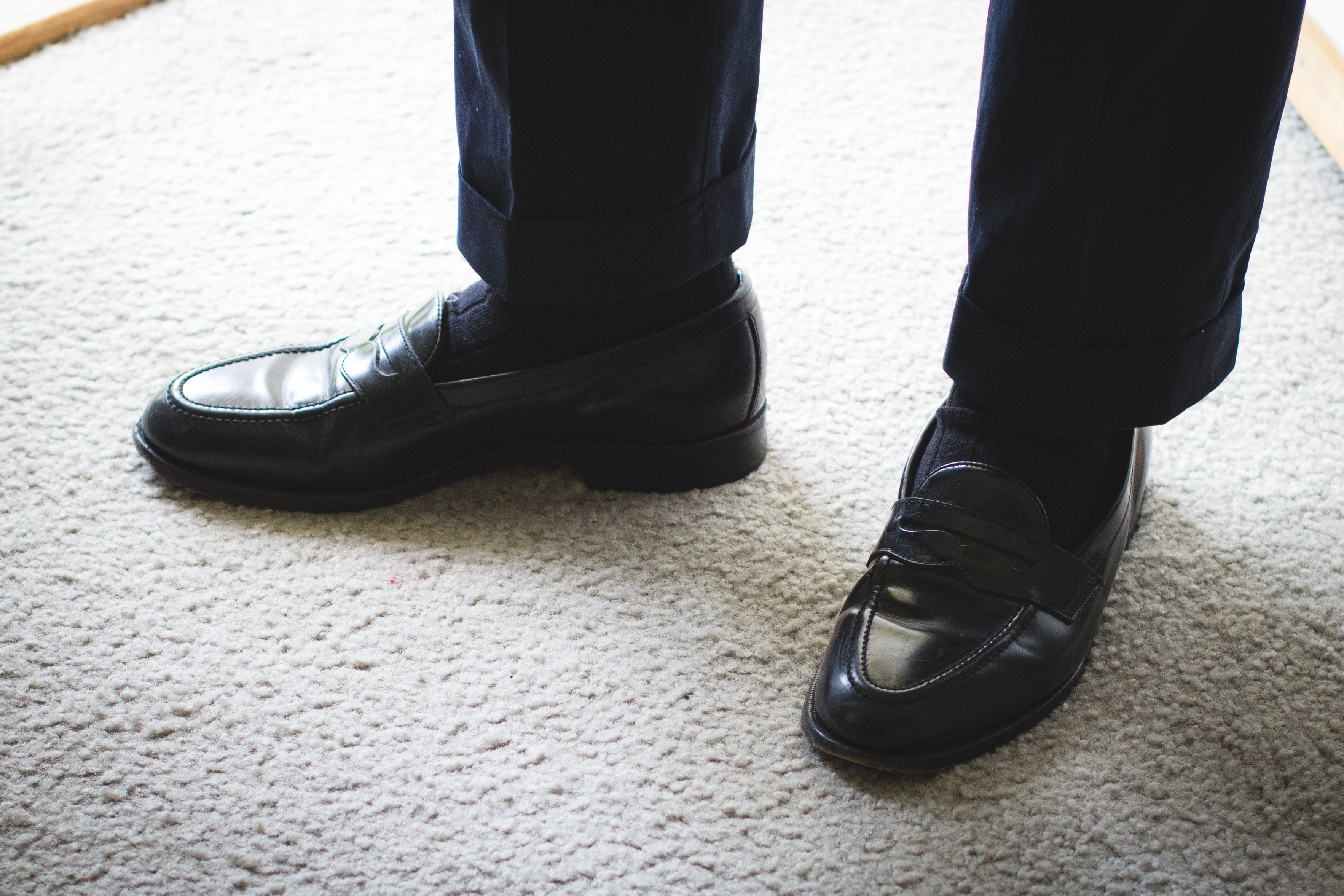 For shoes, I wore my  black Alfred Sargent penny loafers that I scored on ebay. It would’ve been a much more “streetwear move” to go sockless with a pair of longwings, but I believe that the chino and loafer combo makes this outfit fit in with my personal style.  Remember influence is about putting your own spin on something and not straight-up copying. 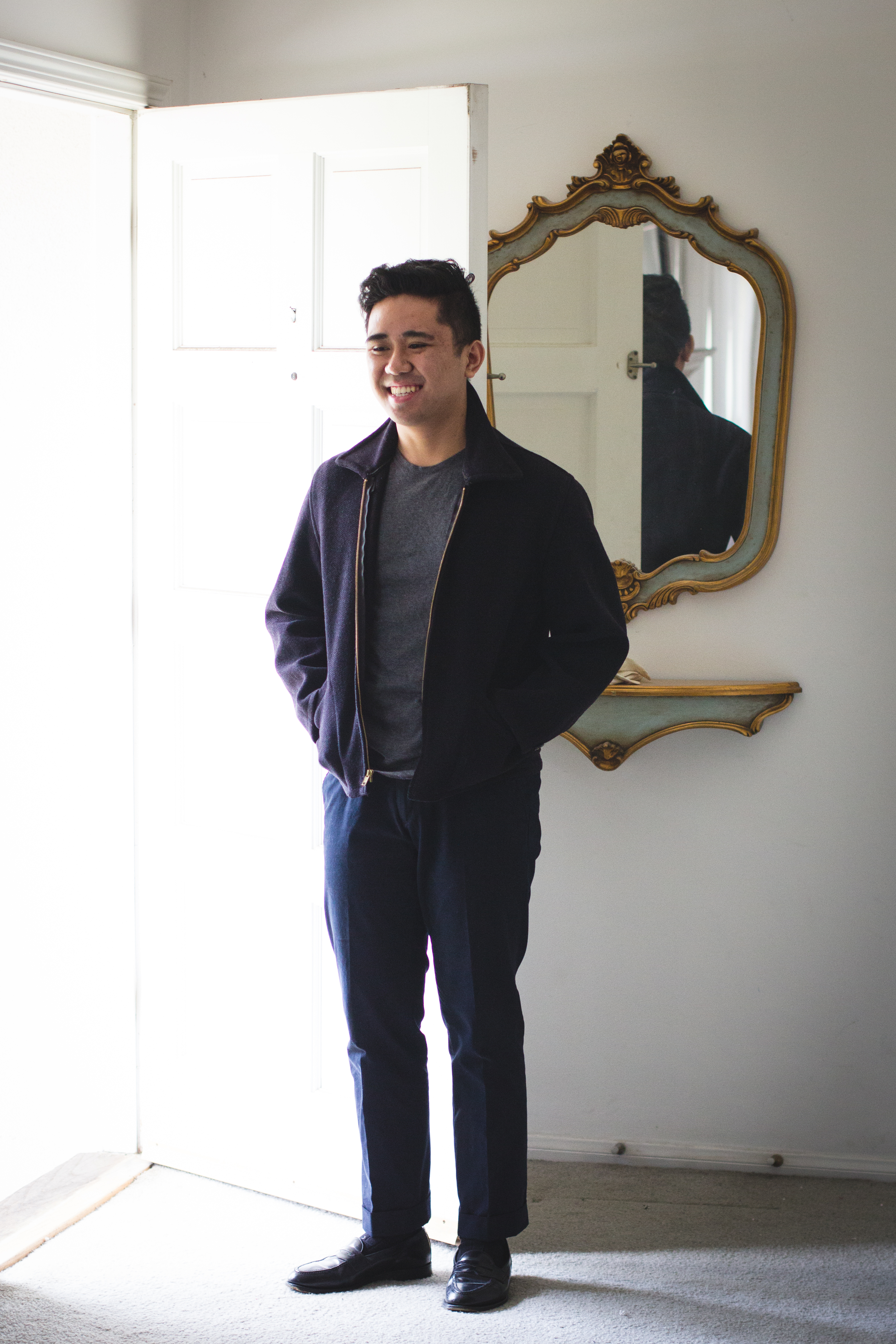 I hope you enjoyed this post!  I know that most of the time I’m in suits and blazers, but I really want to show you guys my casual style.  I also want to continue to show you were I get my inspiration and that there’s nothing wrong with emulating someone else’s style in your own way.  While I’ve already owned all these pieces prior to this post, I wouldn’t have though to put them together this way without getting the ideas from Matt first.

Don’t be afraid to experiment and definitely don’t be afraid to take a few cues from your friends!  I just happen to be blessed enough to be around stylish people, whether it’s Spencer’s vintage sartorial style or Matt’s awesome casual style.

I’m planning to do more posts like this in the future!  Stay tuned everyone.

Photography by David W. (My dad!)