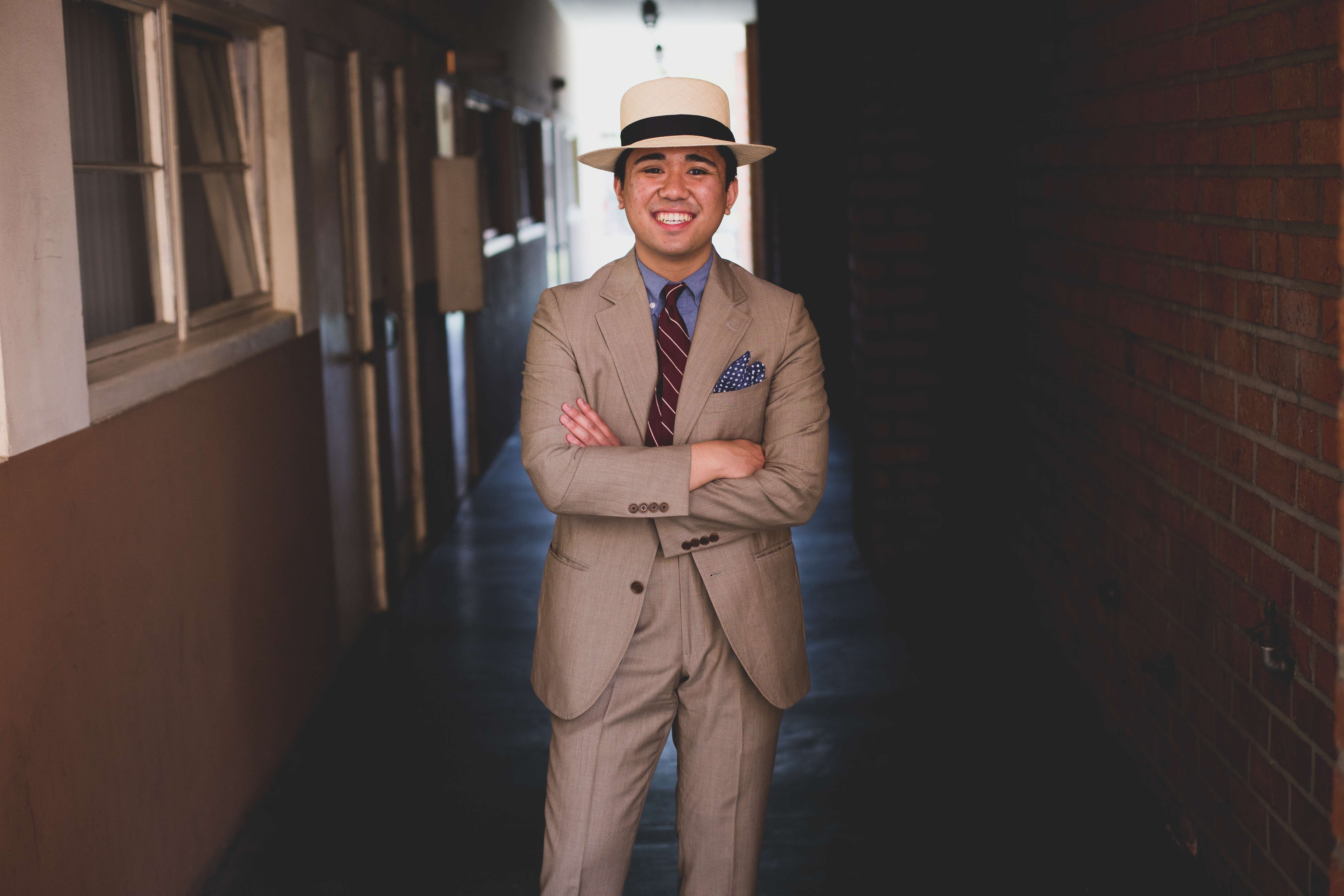 Pitti Uomo, the bi-annual tradeshow and site of #menswear pilgrimage, has come and gone again.  Men of course were dressed in a variety of styles, whether they were classic like the Armoury boys or overly peacocking like AE Marmora.  Even though we couldn’t attend, my friends decided to be inspired and dress up.  Instead of going a bit crazy like we did last time,  we went with more subdued and classic styles. 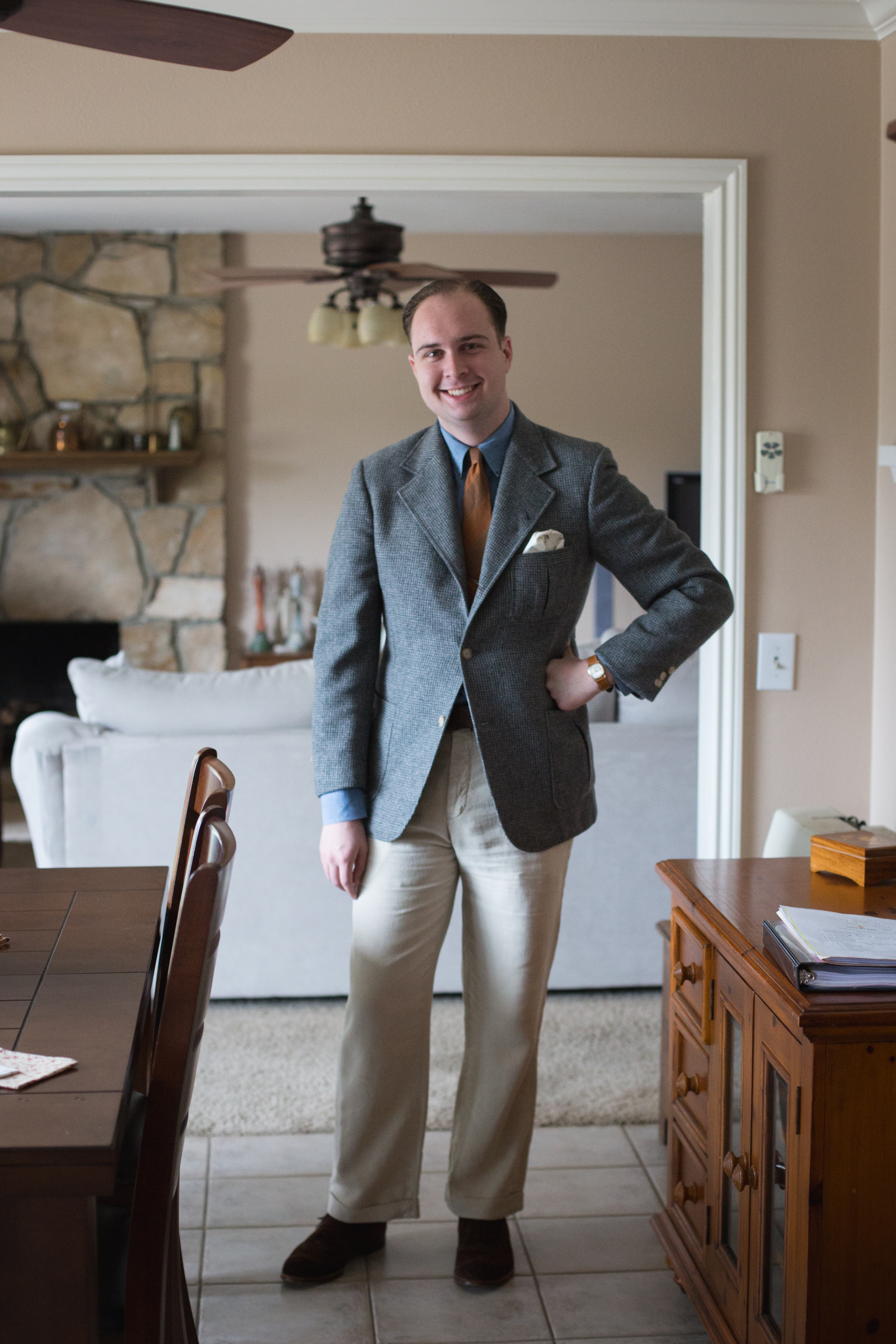 Spencer’s outfit is one of my favourites that he has ever worn.  He’s a vintage enthusiast, yet he wears his clothes in a way that’s currently “trendy”.  White or cream trousers are nothing new, but they have seen a resurgence among #menswwear guys in the past few years.  At every Pitti Uomo (whether its F/W or S/S), you can see gentlemen wearing their white jeans, flannels, chinos, or  linens.  Just like the navy or grey trouser, it’s a great grounding agent that allows you to express more personality in your jacket and tie. Spencer abides by this and adds some awesome colors to his torso with a grey houndstooth belted-back jacket, denim shirt, and a muted-orange tie.    The white pants really help those pieces to pop. 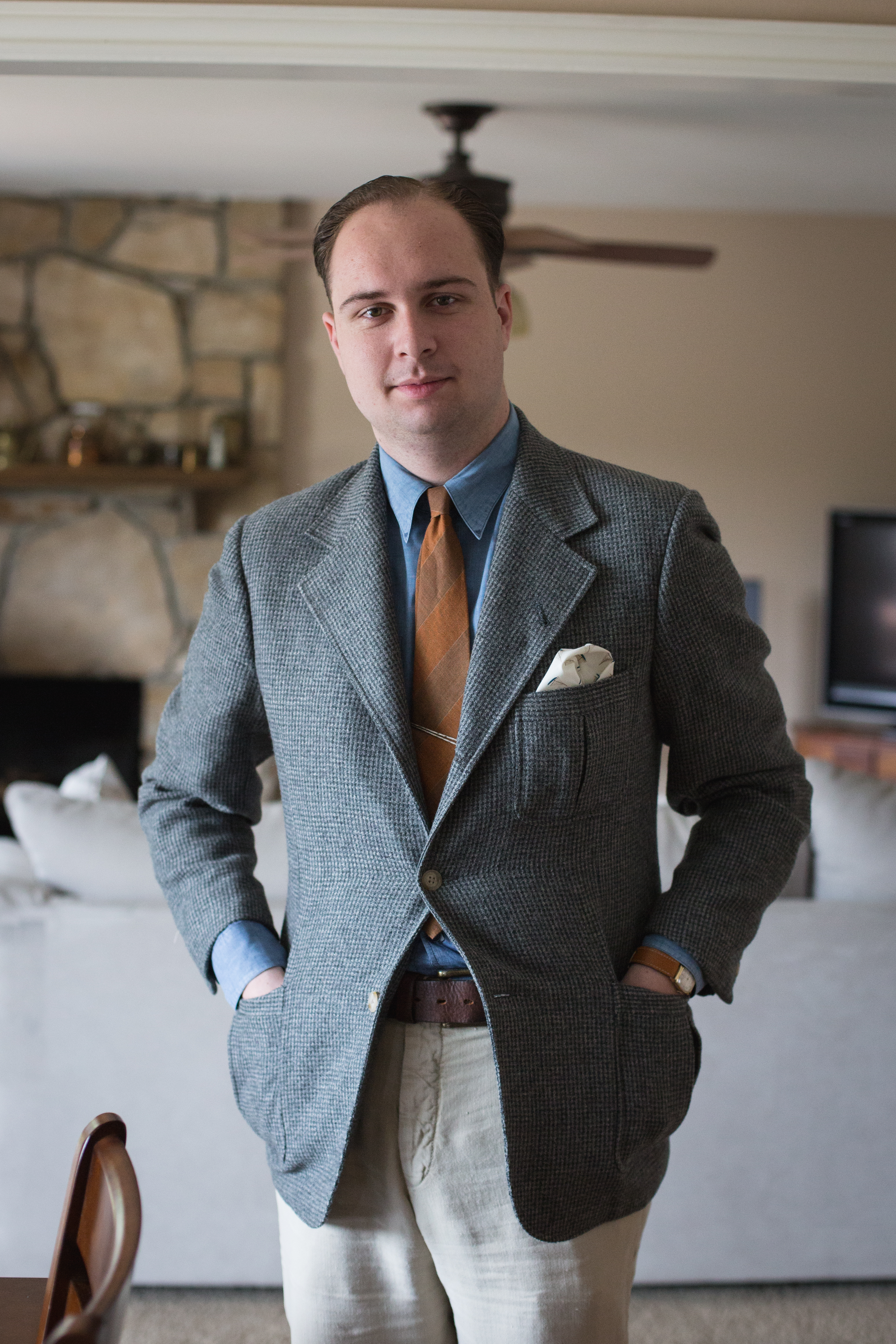 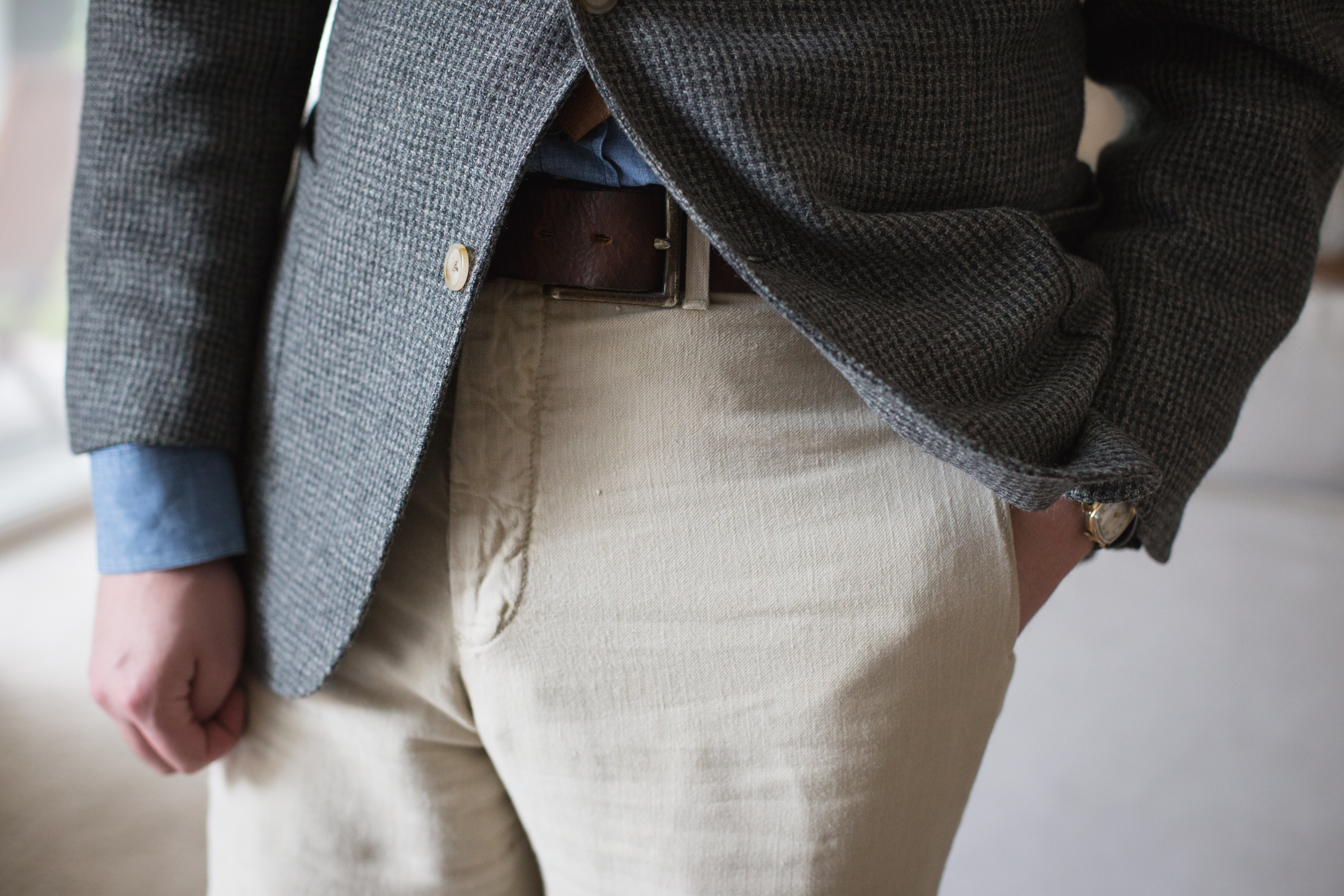 At first glance, you might think that Spencer’s trousers are made of linen.  They’re actually palm beach cloth, which is a discontinued and patented cloth made by the manufacturer of the same name. The exact blend is a mystery, but I believe it contains linen and normal cotton in some capacity; the result is an amazing warm-weather cloth that breathes.  Before 1950 (when they were bought out by another company), a majority of summer suits were made in this coveted fabric.  Spencer’s a lucky guy to have a pair from the 1930’s! 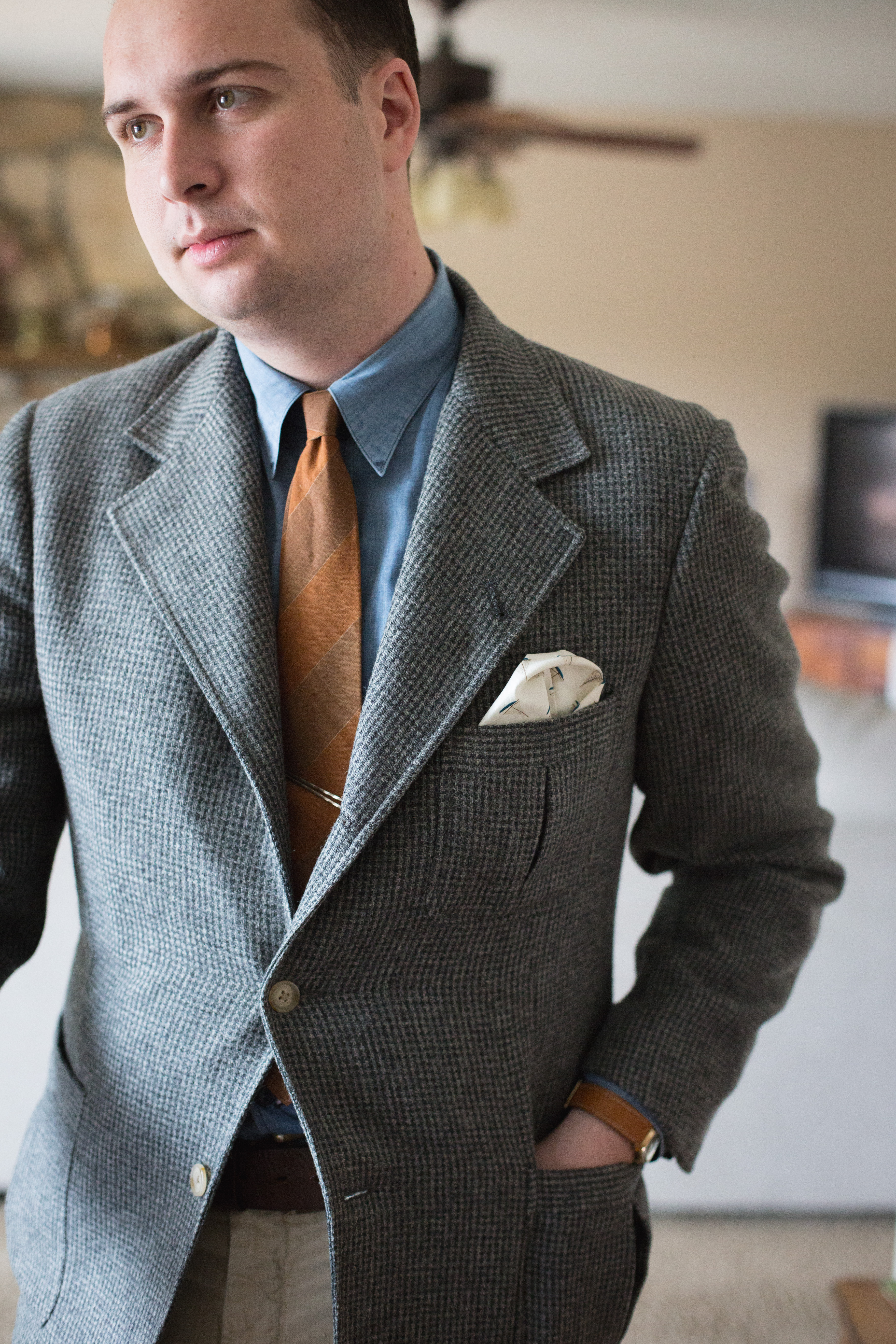 Spencer playing with patterns, with his houndstooth jacket and his block striped tie.  All very subtle!

Note his pocket square: it’s not just a plain white one!  It’s the “Newport” pocket square from our own label Mercer & Arrow!  I highly suggest checking it out. 😉 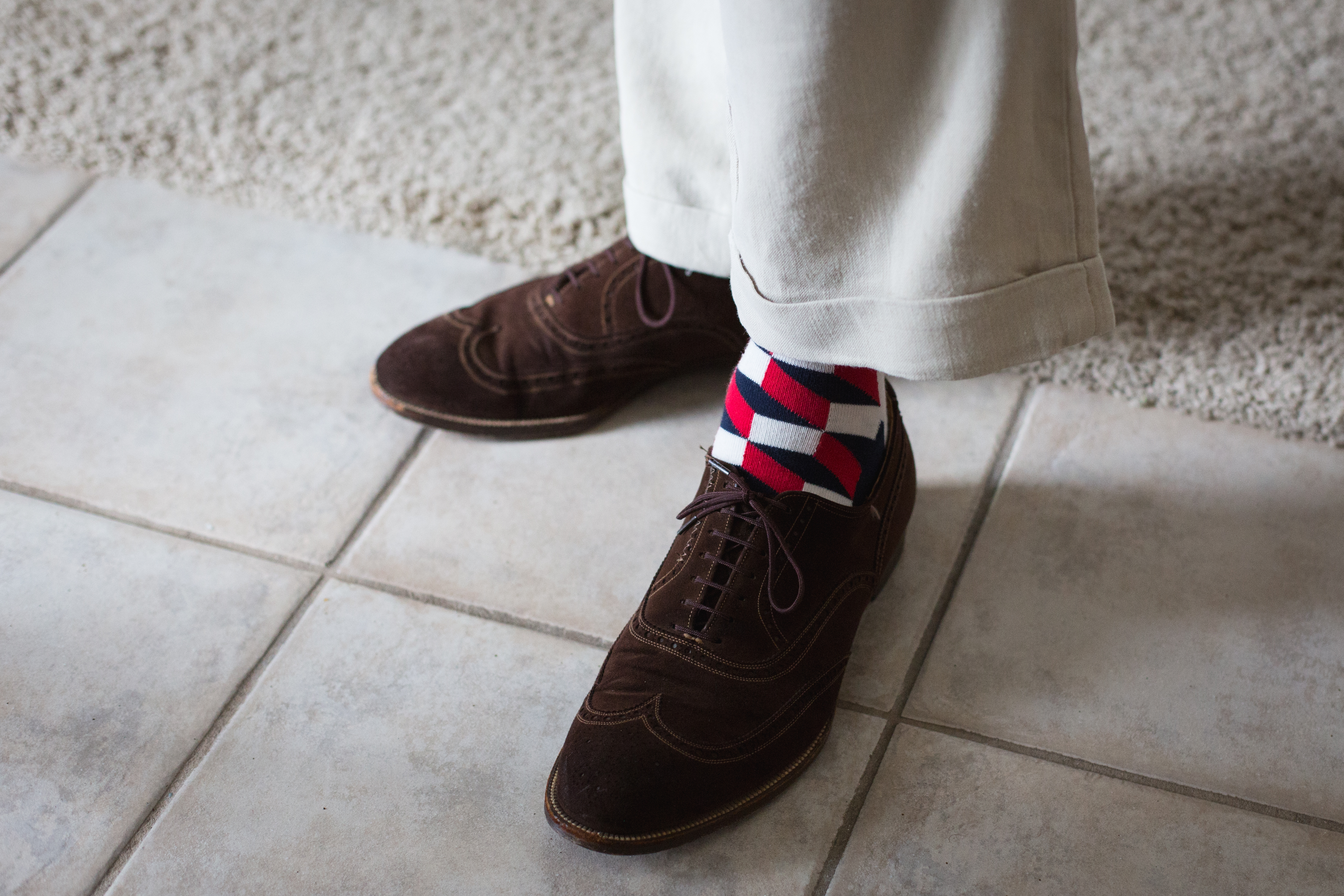 Overall, Spencer’s outfit is really great to me because he didn’t have to do anything crazy to stand out.  There’s no floral patterns or bright blue blazers.  He has very basic, muted colors that are allowed to pop thanks to his white trousers. 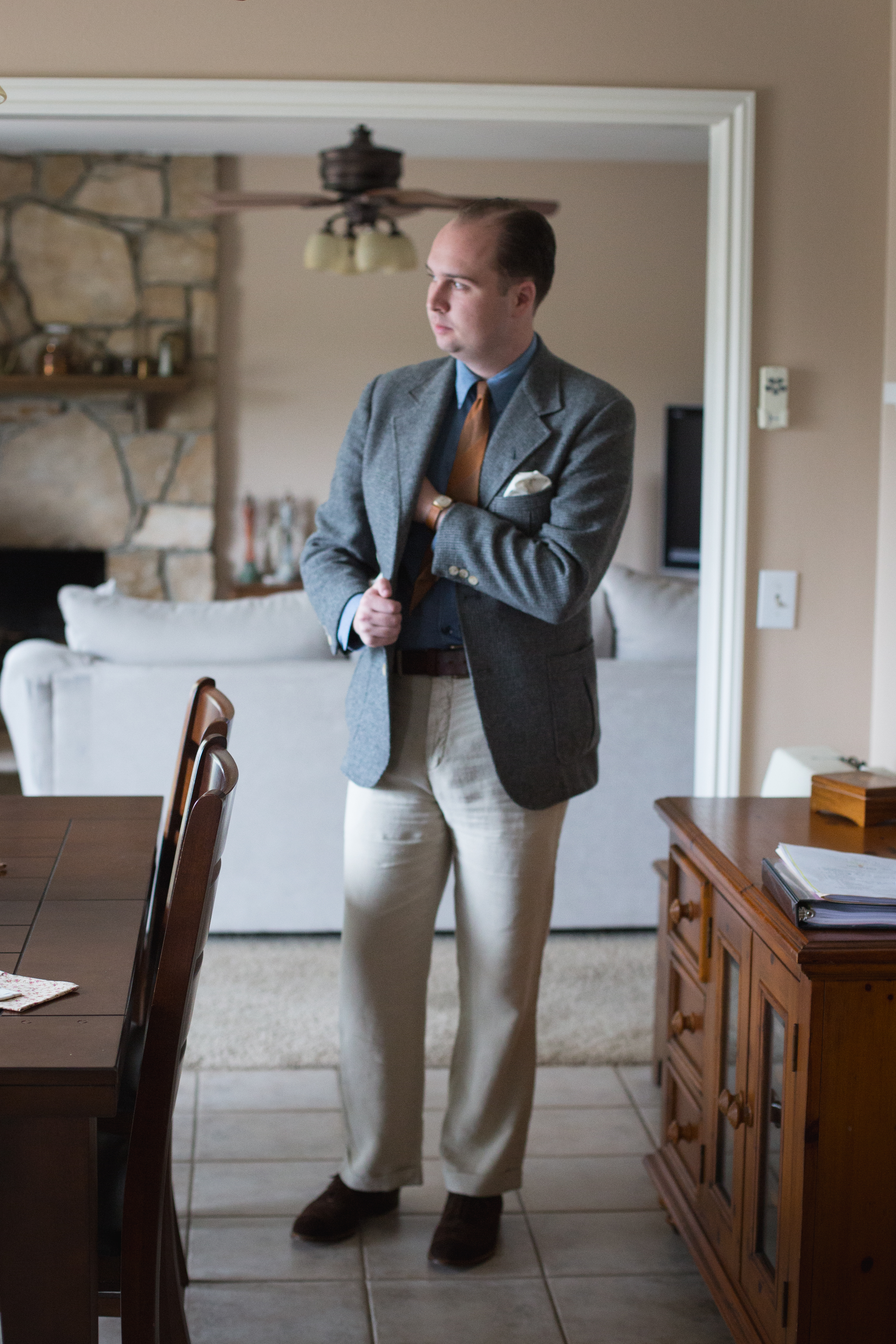 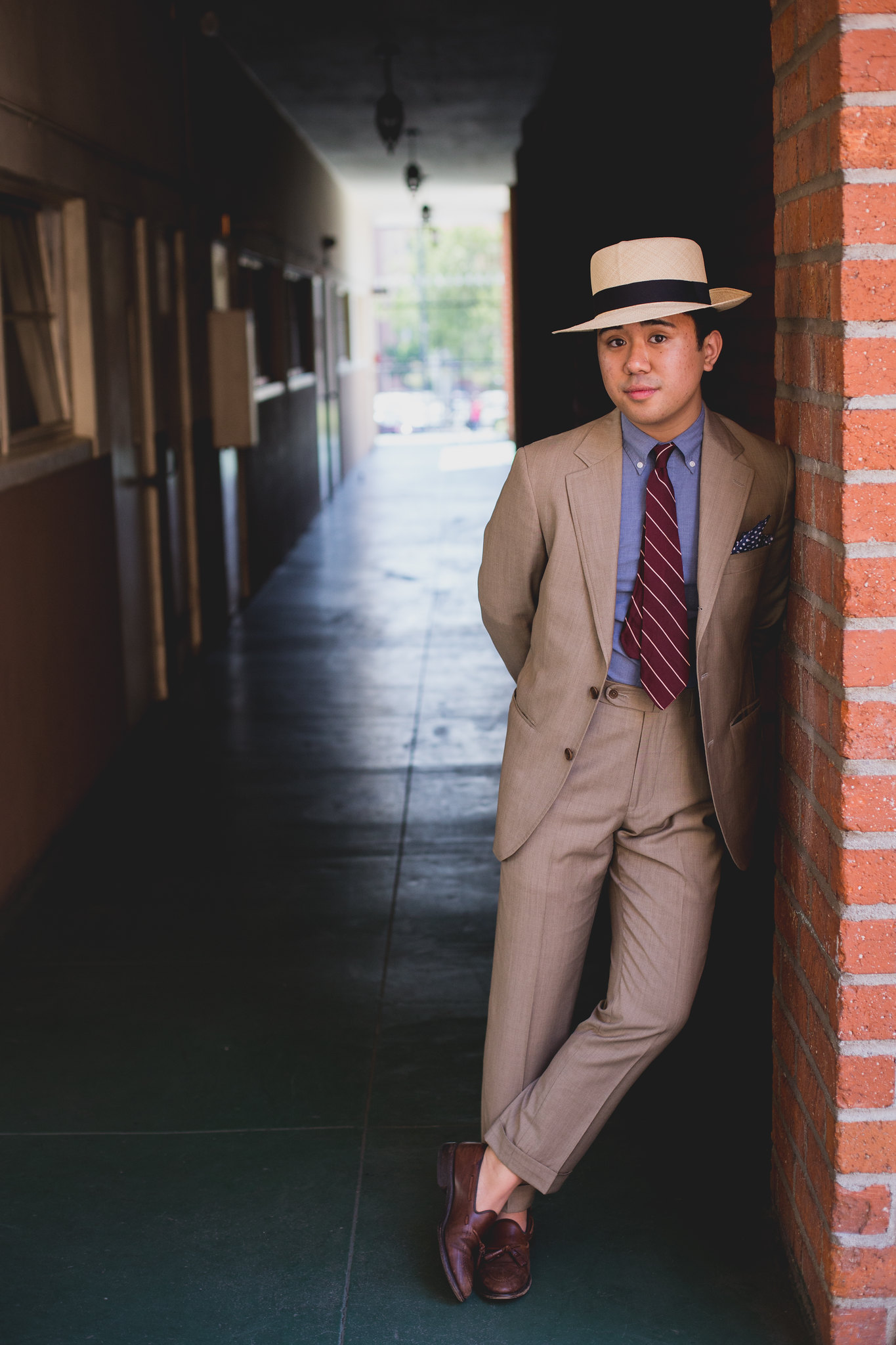 Last Pitti, I wore a pinstripe DB suit with a burgundy turtle neck.   This time, I went with a more traditional approach, with a beige 3 roll 2 suit, blue shirt, and striped tie; the panama hat was chosen since its hot!  While there aren’t any patterns or textures like Spencer’s outfit had, I believe that this outfit’s pop lie in the small details and the tailoring.  Just look at the fit!  The pants are high-rise and are hemmed to end at my ankle, to prevent any semblance of a break; the jacket fits snugly without being too tight. 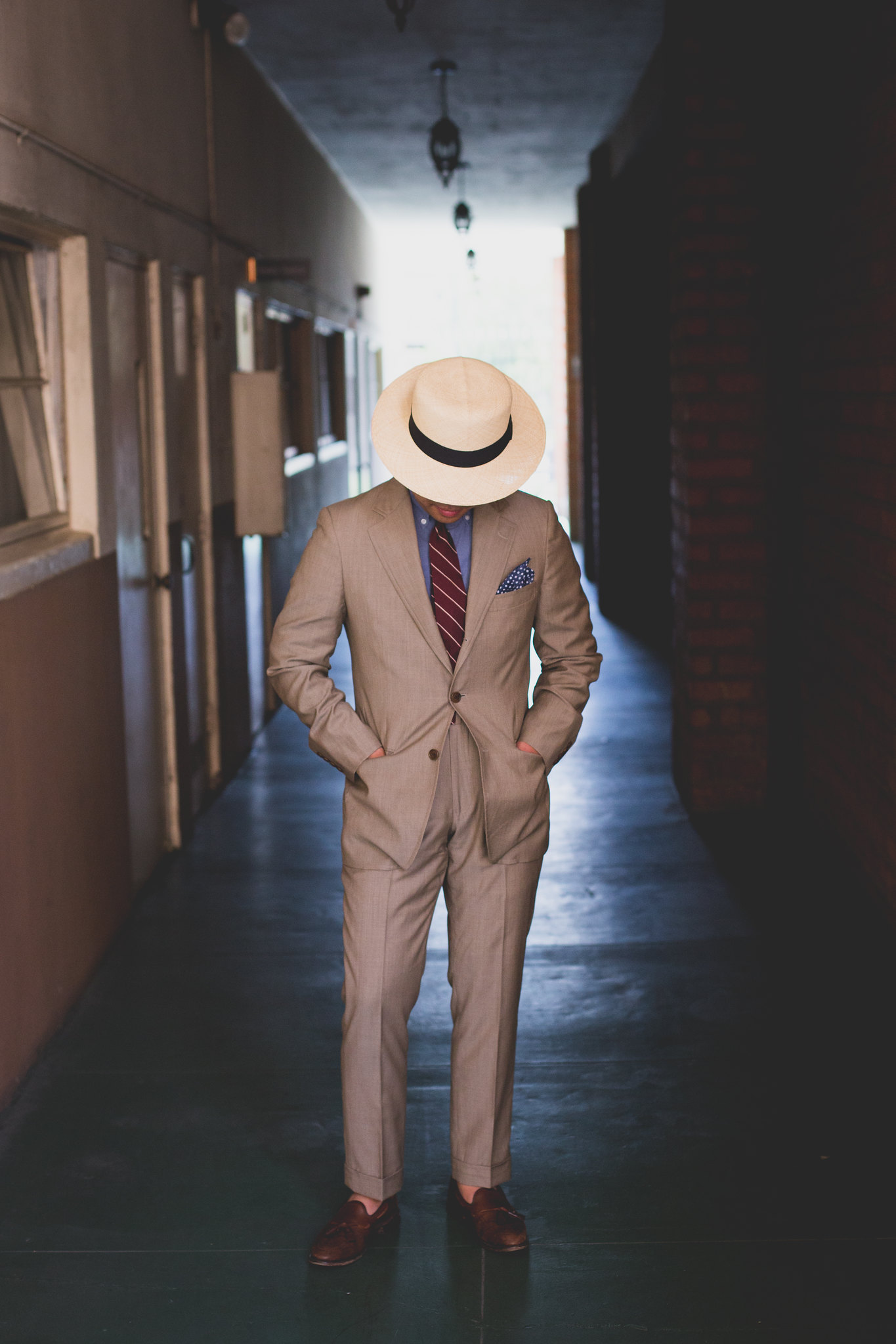 I call this my “faux-solaro” suit.  Solaro is a crazy iridescent wool that is beige/olive colored with interwoven red yarn; it is usually found in herringbones or twill.  Compare the color of my suit with the solaro suit worn by Alan See at Pitti last year.  It’s a close match!

Dan Trepanier from Articles of Style wrote a great piece on solaro. 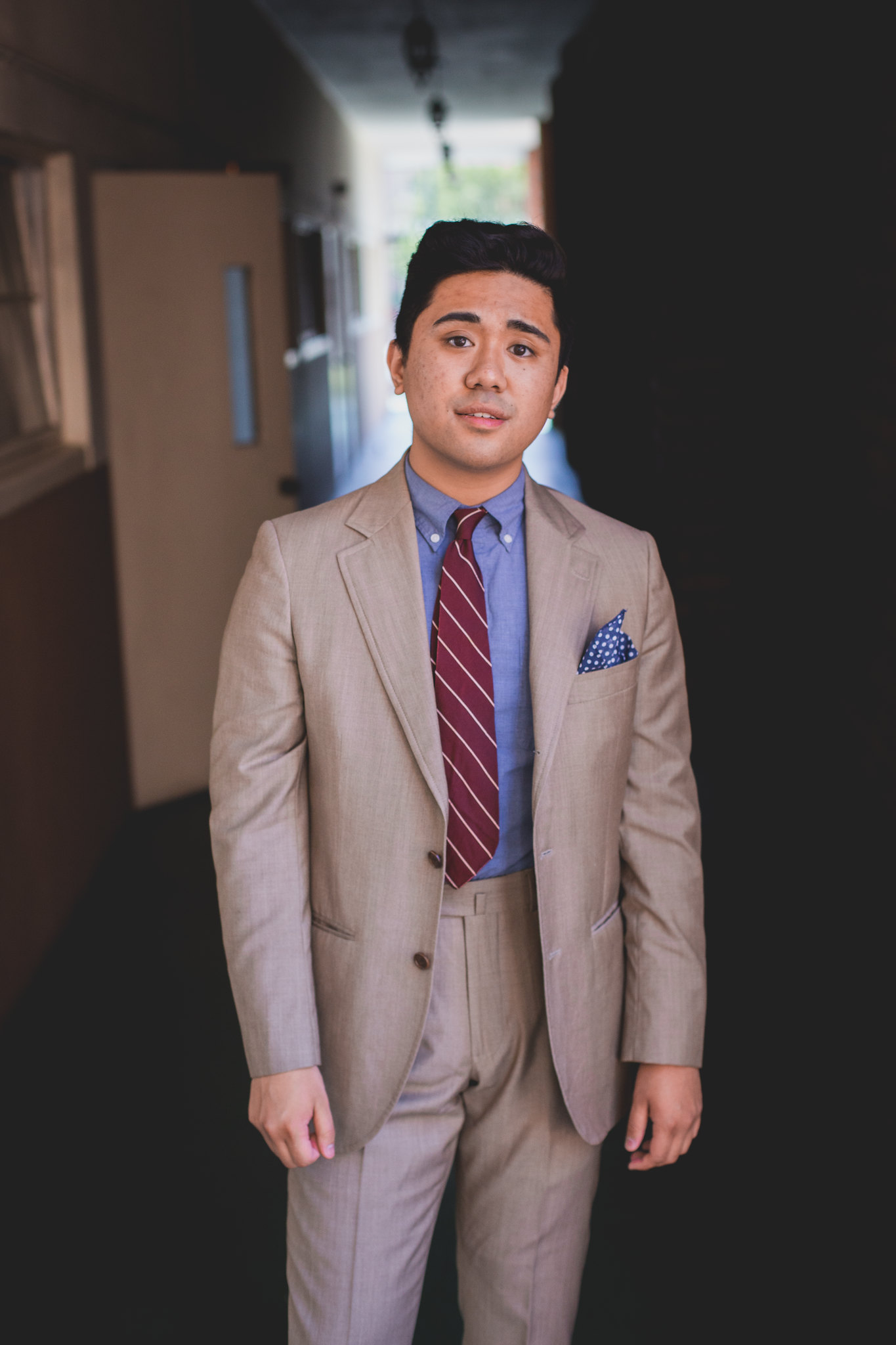 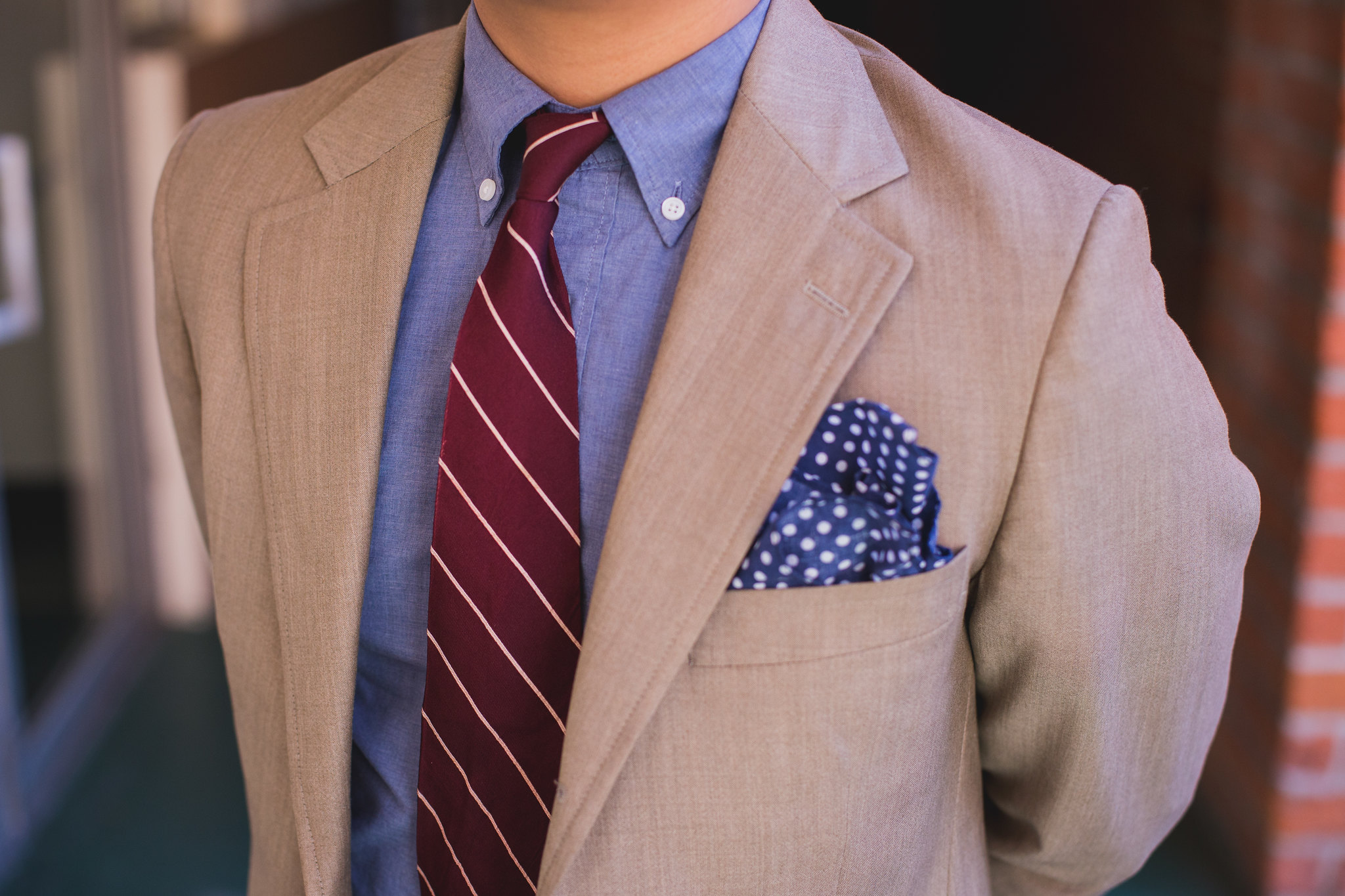 Most of the time, pick-stitching is a surefire sign of a 1970s suit.  However, if it is done tastefully and not present on a polyester suit, it can still be a great detail to have!  I gotta say, I really lucked out on this suit.  It’s a half-lined, half-canvassed suit, made from Loro Pianna Wool and manufactured by Southwick (the same manufacturers that Articles of Style uses for their suits)!  The story behind it is very similar to my previous article on my “new” ivy suit. I copped it for only $85 bucks on eBay and alterations were only about $30 bucks!  It just shows you that you don’t have to pay thousands of dollars to look like one of the Armoury boys. 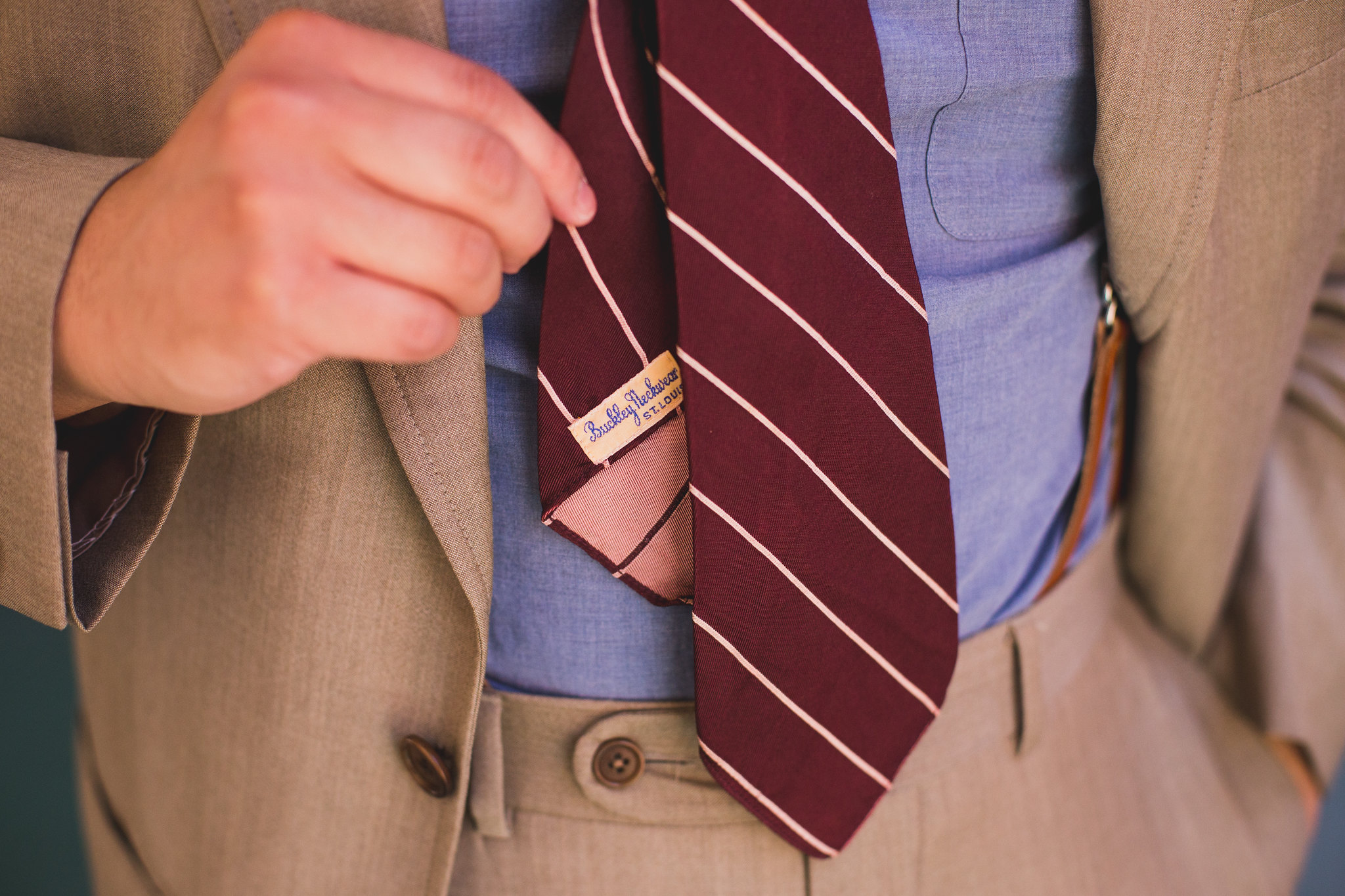 The tie has an interesting detail.  Back in the 1930s (and until the 70s) ties did not have keepers. Tie manufacturers would then put their logo on the back blade of the tie!  It’s just a small detail that you can only find on vintage items!  Plus, these ties are extremely thin, with handrolled/unlined edges! Current ties with those details cost more than $100! 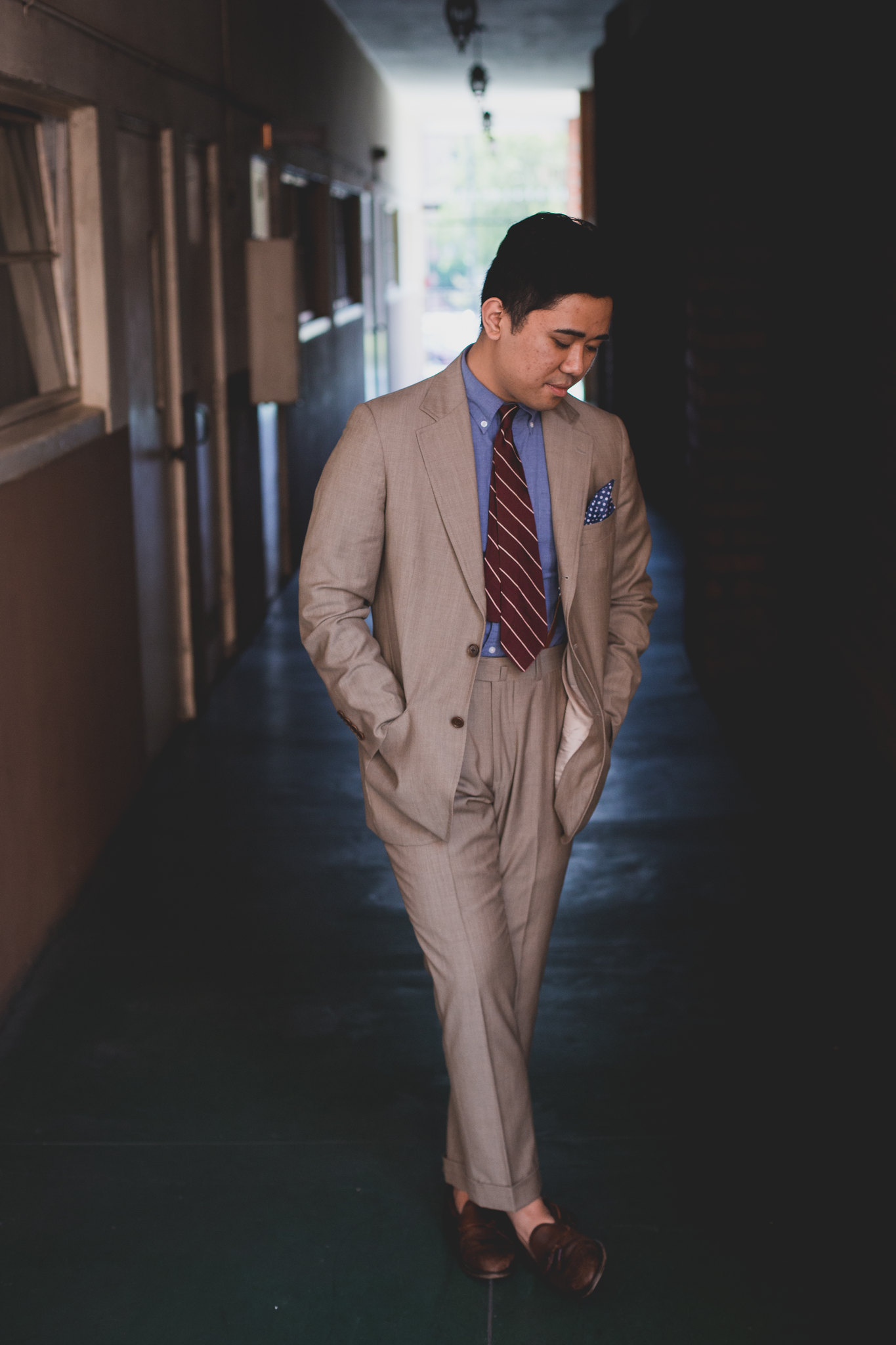 Am I Jake Grantham yet?

Other Subdued and Classic Gents

Here are a few gentlemen from Pitti that I think had really great looks without overdoing it!  All pictures are originally from Styleforum, a website that I have recently started posting on!  It’s a more mature location than MFA on reddit, so the conversations there take some getting used to!

EFV, a member and mod of Styleforum, goes to Pitti everytime and always takes time out of his trip to document streetstyle for members of the forum.  As stated before, these are my favourites, but there is plenty of style to be found on his original post on Pitti Uomo 90.   If you haven’t checked out Styleforum yet I really advocate it! Shuhei Nishiguchi in a gorgeous double breasted suit.  Those lapels are exactly what I want in my life. The Shibumi boys.  Benedikt in a classic solaro suit with high waist trousers.  Niels in a tasteful dark brown suit. Both are probably made by Sartoria Corcos. A  very classic yet simply look! You don’t always need a high-waist or large lapels to look good! Jake  Grantham(on the left) is my biggest style icon.  Here he is in a (probably) Orazio Luciano pinstripe suit, blue shirt, and blue tie. Alex Pirounis is also in a DB, but in a solid version without any patterns. Both of these gentlemen look amazing without peacocking!  Their biggest stand-out is their exquisite tailoring. I guess Alan See is my Pitti Uomo twin! Like me, he has a brown suit (in cotton it seems) and a panama hat! Maybe someday I’ll be like him and own my own atelier. Seems like Brown and Blue are the main colors of this Pitti! I really dig the brown suit though; just check out those pleats!

We finish of our Pitti editorial with the team of B&Tailor and The Finery Company.  Chad Park (second from left) is wearing a gorgeous tobacco/mustard suit with a belt.  Most high waist pants I’ve seen at Pitti (or in general) typically use suspenders or side adjusters.  Props to him for that detail. It’s not a huge deal but its pretty interesting once you see all the trends of Pitti Uomo.  I’m also digging his super deep polo; the dark blue shade helps ground his outfit.

Joe Ha (middle) is the owner of the Australian haberdashery Finery Company and is probably one of most “peacocky” of my article.  However, his outfit is very similar to Spencer’s, just swap the dress shirt and tie with a polo!

The two gentlemen on the right have some great ivy-trad outfits, with their classic colored suits and striped ties.  Note that the Asian man has only his bottom buttoned fastened.  I’m sure it was done on purpose.  However, I wouldn’t recommend it as a style move for everyone; you may not have the confidence to pull it off! Hell I wouldn’t even do that!

The first man on the left is probably the peacock of the group.  He has a classic windowpane jacket, but the fact that his sunglasses are gold and has a rose tint just make it stand out to me.  Who would’ve thought that sunglass lenses would be a detail to pay attention to?

I hope you enjoyed Spencer and my own Pitti Uomo inspired oufits!  I also hope that this article gave you some summer sartorial inspiration, whether its from us or from our favourite attendees!  It has been my dream to go there, even if it is only to document the style there because Pitti is full of it.  It would also be nice to go as a business person.  But that’s in the future.

For now, I heavily recommend that you check out the Styleforum coverage of Pitti Uomo 90!  It has the most people featured.  Plus you can read all about EFV’s adventures in the city!