Herringbone is a classic pattern that has been found on suits, jackets, shirts, and even ties.  Dan Trepanier from Articles of Style wrote a great piece on it’s history.  Being a classic pattern, it provides a great vintage look when found on a sport coat or suit!  It’s been a while since we’ve done a “What We Wore This Week”, so here’s our latest entry with Spencer and I both wearing the pattern!

For the Beginners:  A Sportcoat 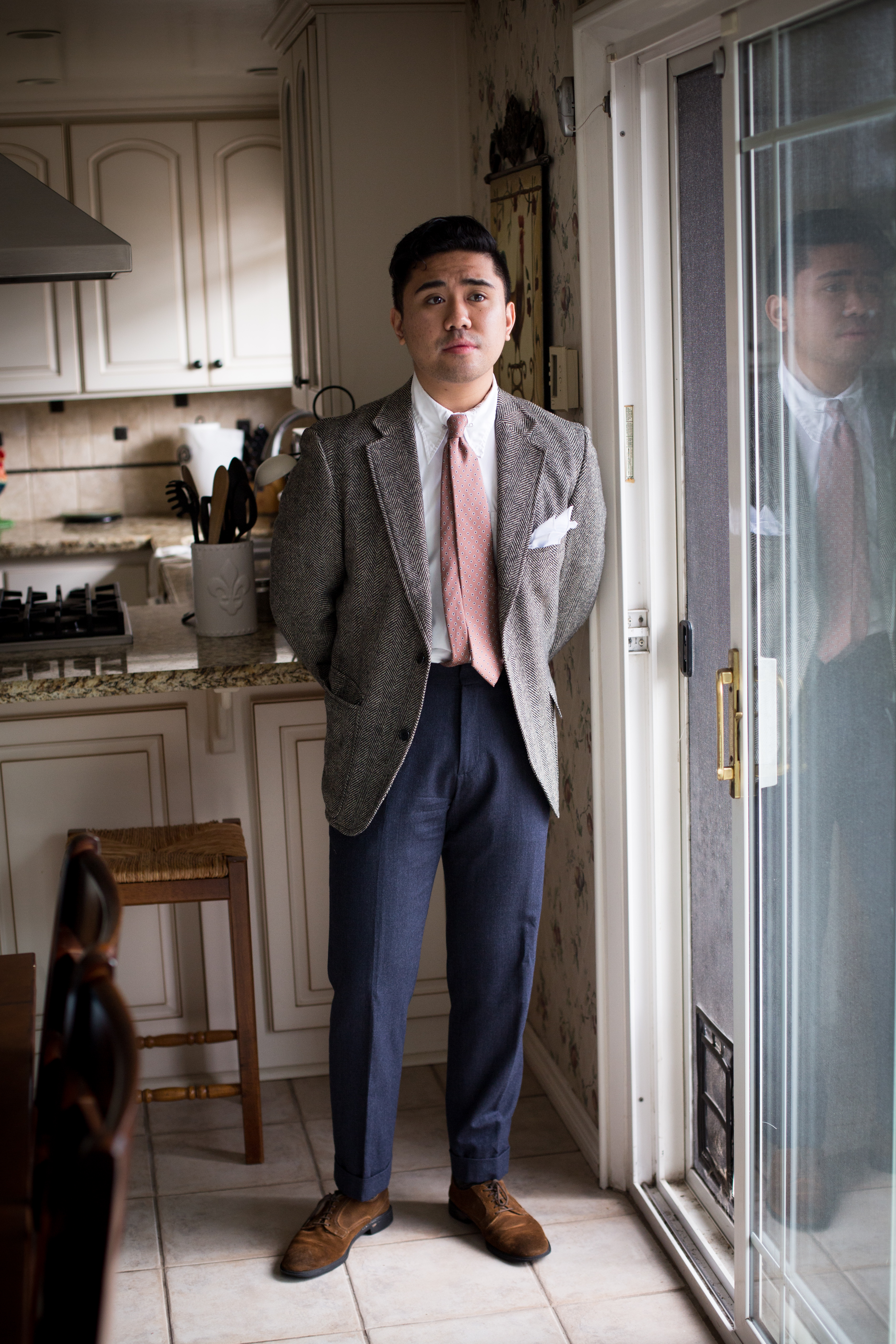 Most guys are afraid of patterns. Maybe its because wearing something patterned is a bit hard for guys to pair with, and I don’t blame them.  Patterns can be intimidating  Now limiting the herringbone to just a jacket is still pretty cool and much easier to pull off.

Pair your grey jacket with navy flannels to create a classic fall look!  Navy and grey go together quite well and are one of the main color combinations suggested for men when they are starting out in suiting.  In this case, the solid navy trousers help ground the “bold” pattern so that it isn’t too “fashion-y”.  For a desired color pop (in an otherwise bland outfit), I chose a nice light brown (almost pink) foulard tie. The blue in the print echos the blue in the trousers. 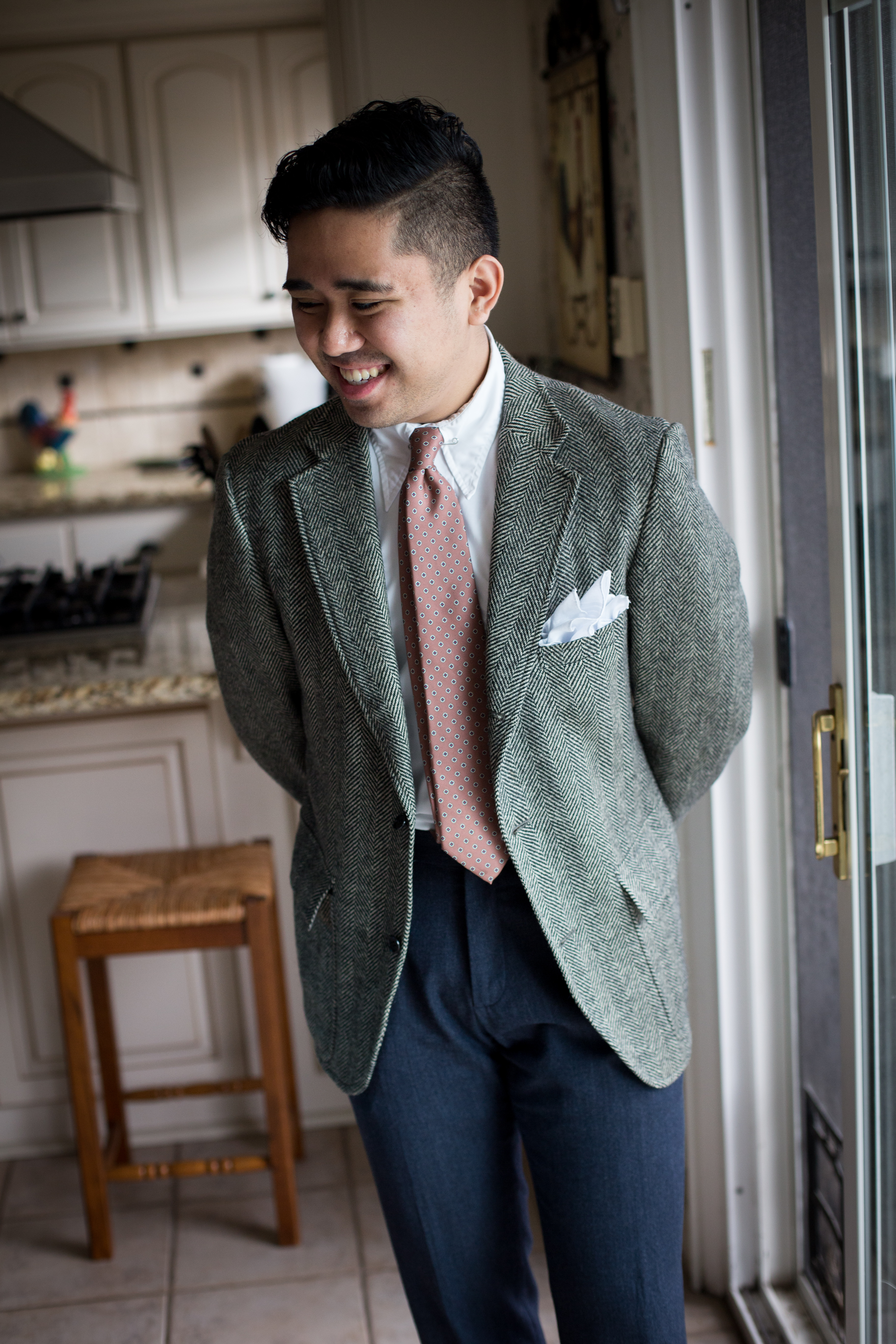 While patterns can be tricky, the point remains: a tweed herringbone jacket is the jacket to get for fall.  You can spend your hundreds at J. Crew or Brooks Brothers (which are fine companies, by the way) or you can get something of better quality: vintage.  You don’t need to buy a thick 1930’s jacket, but ones from recent vitnage eras (1960s-1990s) can still be great. Plus, that’s what most of the stock at Goodwill, thrift stores, and eBay are filled with!  The one I’m wearing is from the late 1960’s and has a three-roll-two button stance, patch pockets, and is unlined.  You can spend a lot of money to get these details on a something modern or you can get it for a few bucks by hunting at a thrift store.  Mine cost $20 and fits perfectly. 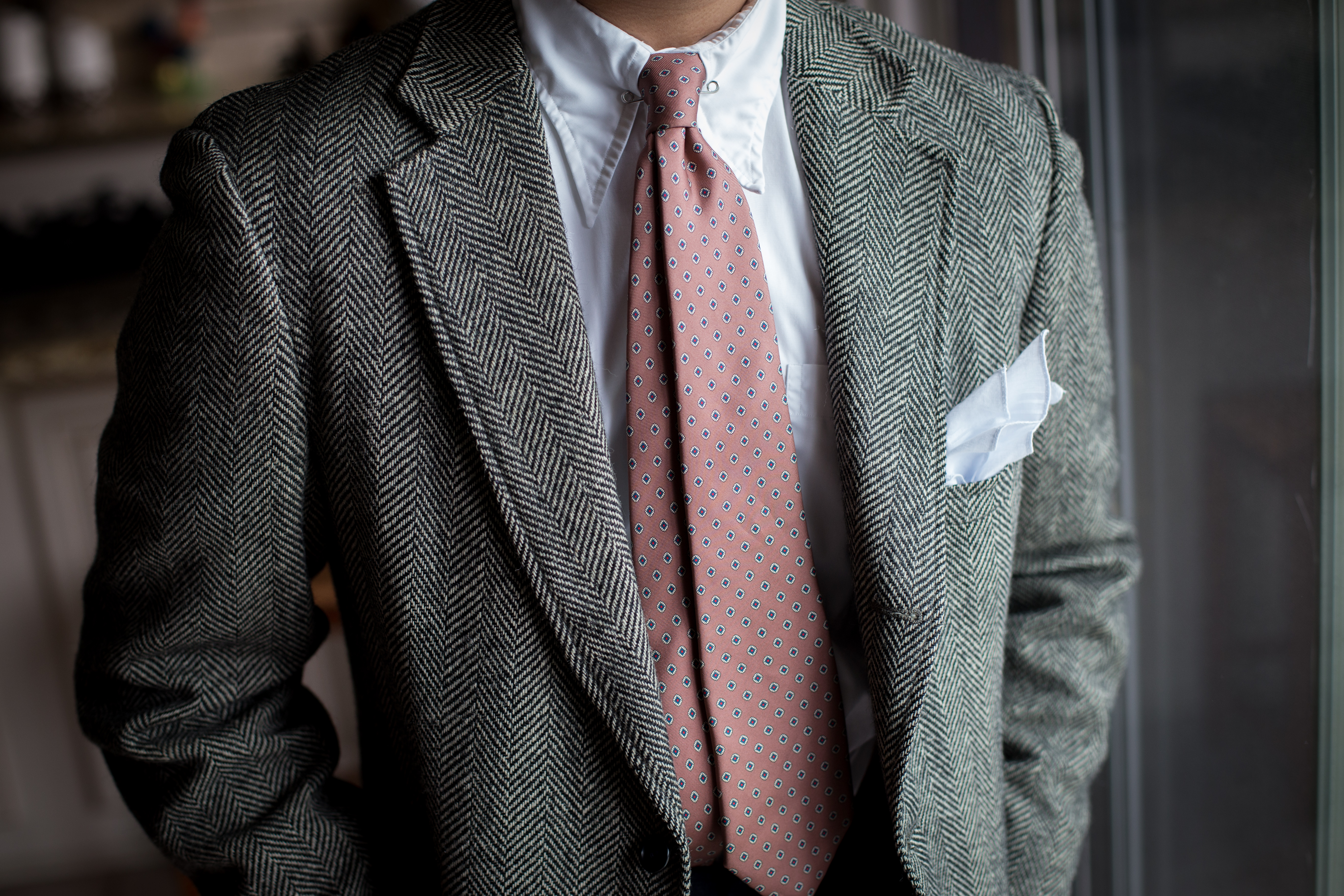 My combination is pretty classic, but it still has some vintage vibes.  Most bloggers today would recommend wearing a spread collar shirt   since its the “mordern thing to do”, but my style is decidedly more 1930s inspired. The foulard tie works in every era, but its the use of a spearpoint collar shirt, collar bar, and exploding pocket square that makes it very Golden Era!  Note that the back blade of the tie is peaking out and tucked in; that’s called sprezzatura my friend. 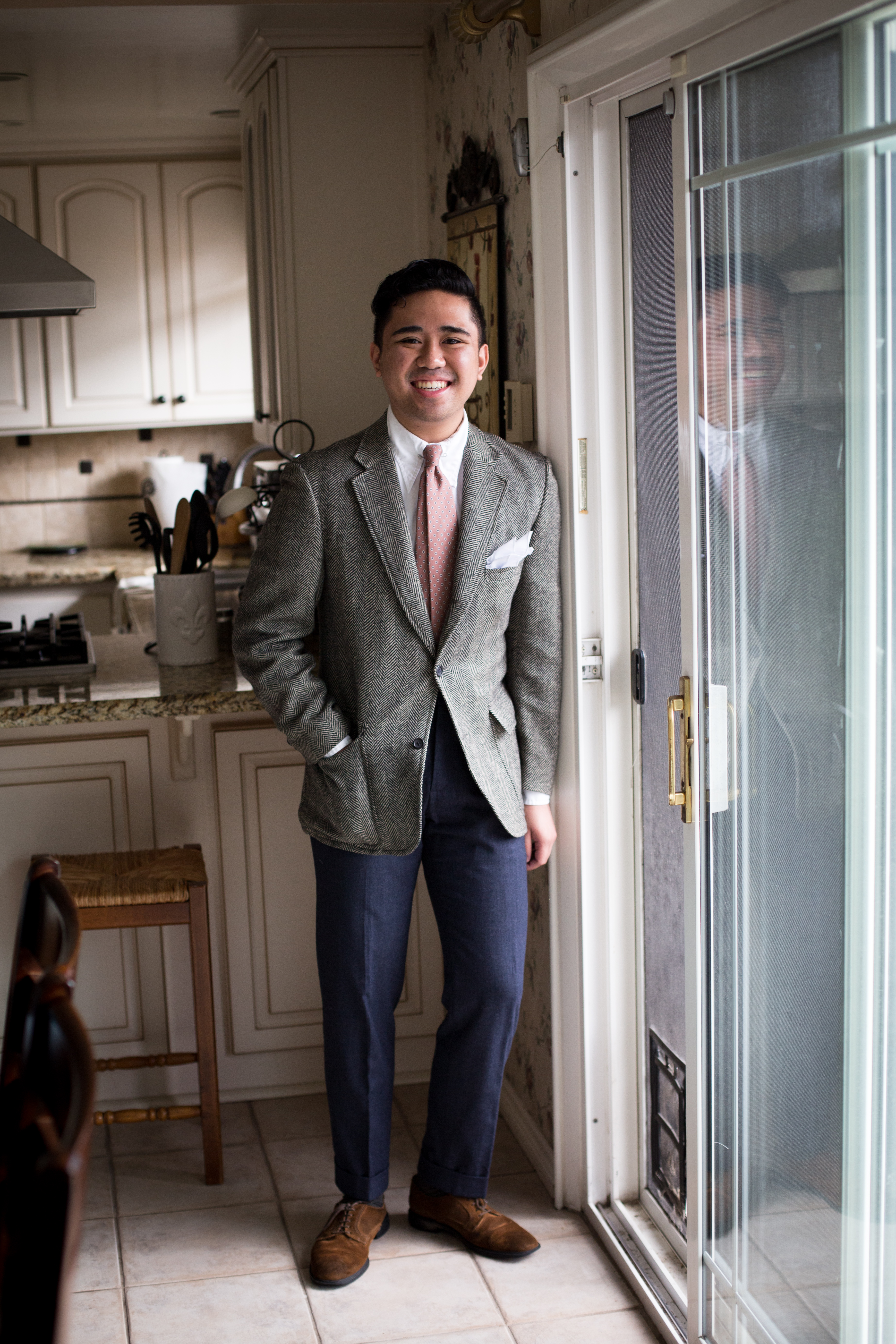 For the Experts: A Full Suit 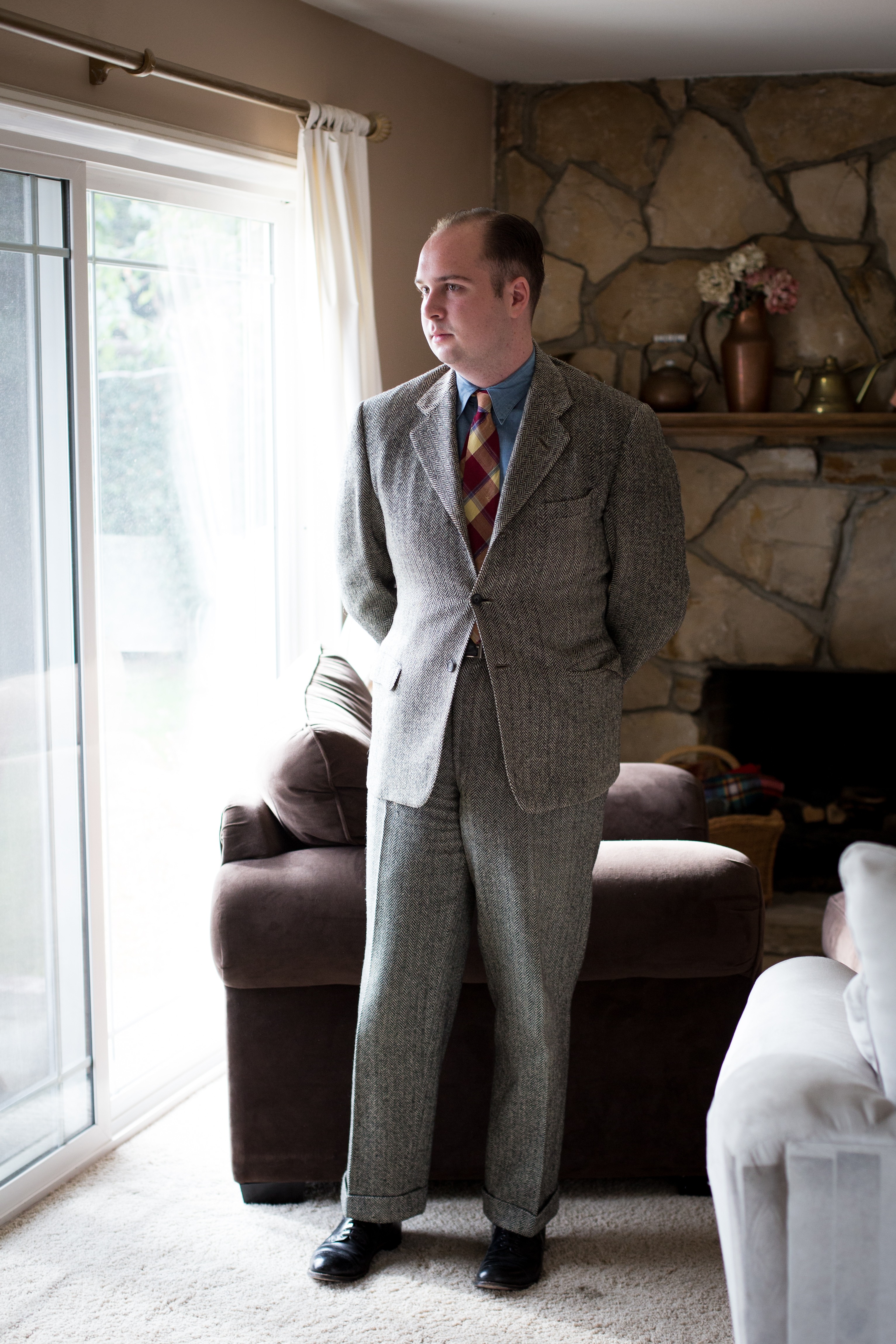 Spencer is also wearing a  three-roll-2 tweed herringbone jacket, but he put on the full suit.  A bit ballsy for some guys, but perfectly standard for people like Spencer and me.  It funcitons the same as a grey suit, just with some texture and visual interest.  As the cold weather becomes more abundant, a full suit offers a lot of opportunities for fall style.  Spencer can wear the pieces together or separately; it’s a great pattern and color that can be used in a variety of different outfits. 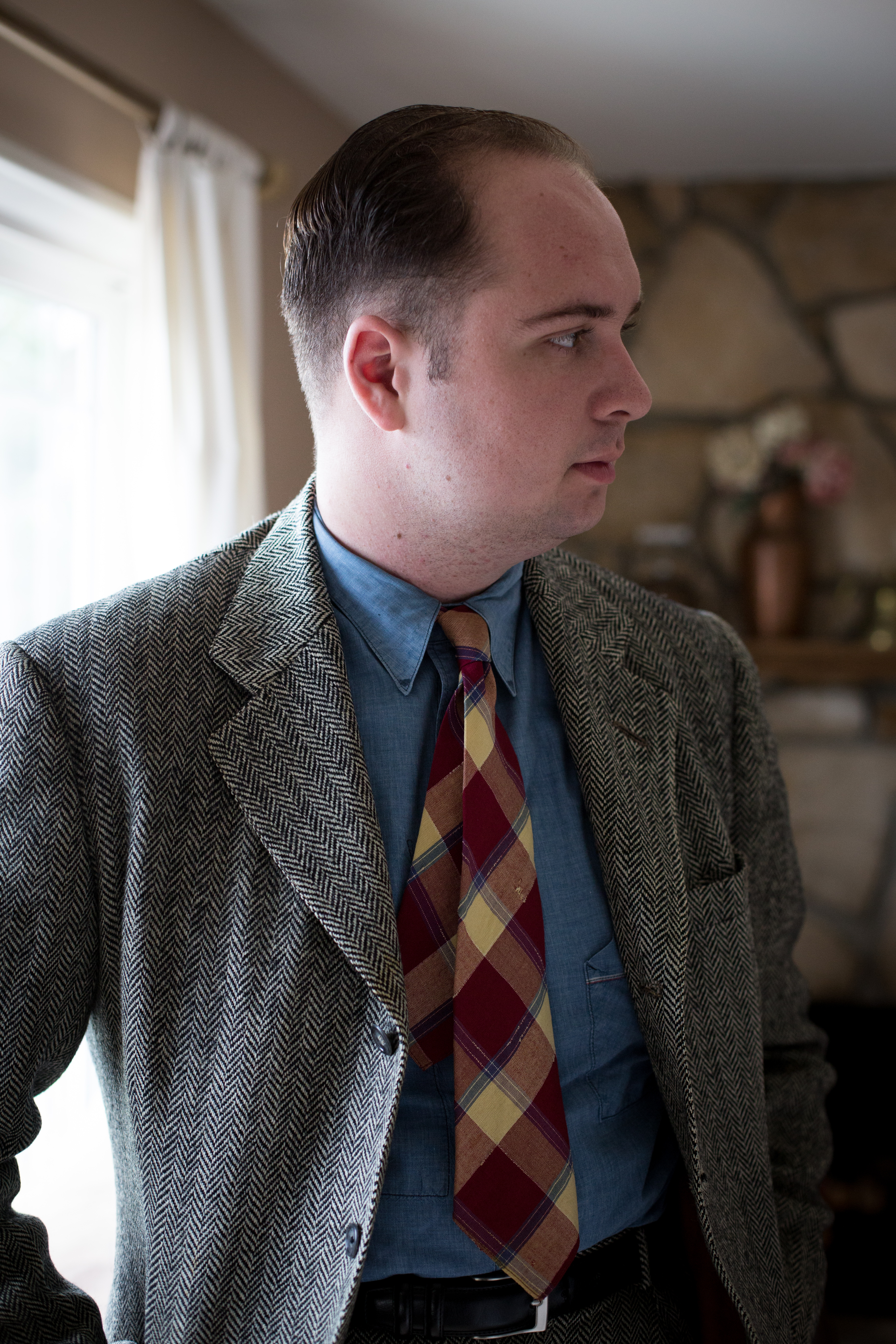 Like I said before, the 1930’s and 1940’s were all about pattern mixing. No they didn’t use floral prints like young guys do today, but they kept it classic with stripes, checks, and herringbones.  Here, Spencer gives us a glorious display of typical Golden Era matching by puting a vibrant checked tie with his herringbone suit.  The use of a denim spearpoint shirt allows the tie to be the main focus.  It’s almost like something straight on the cover of GQ, jsut with all “true vintage” 1930’s and 1940’s pieces. Mine was all fairly recent! 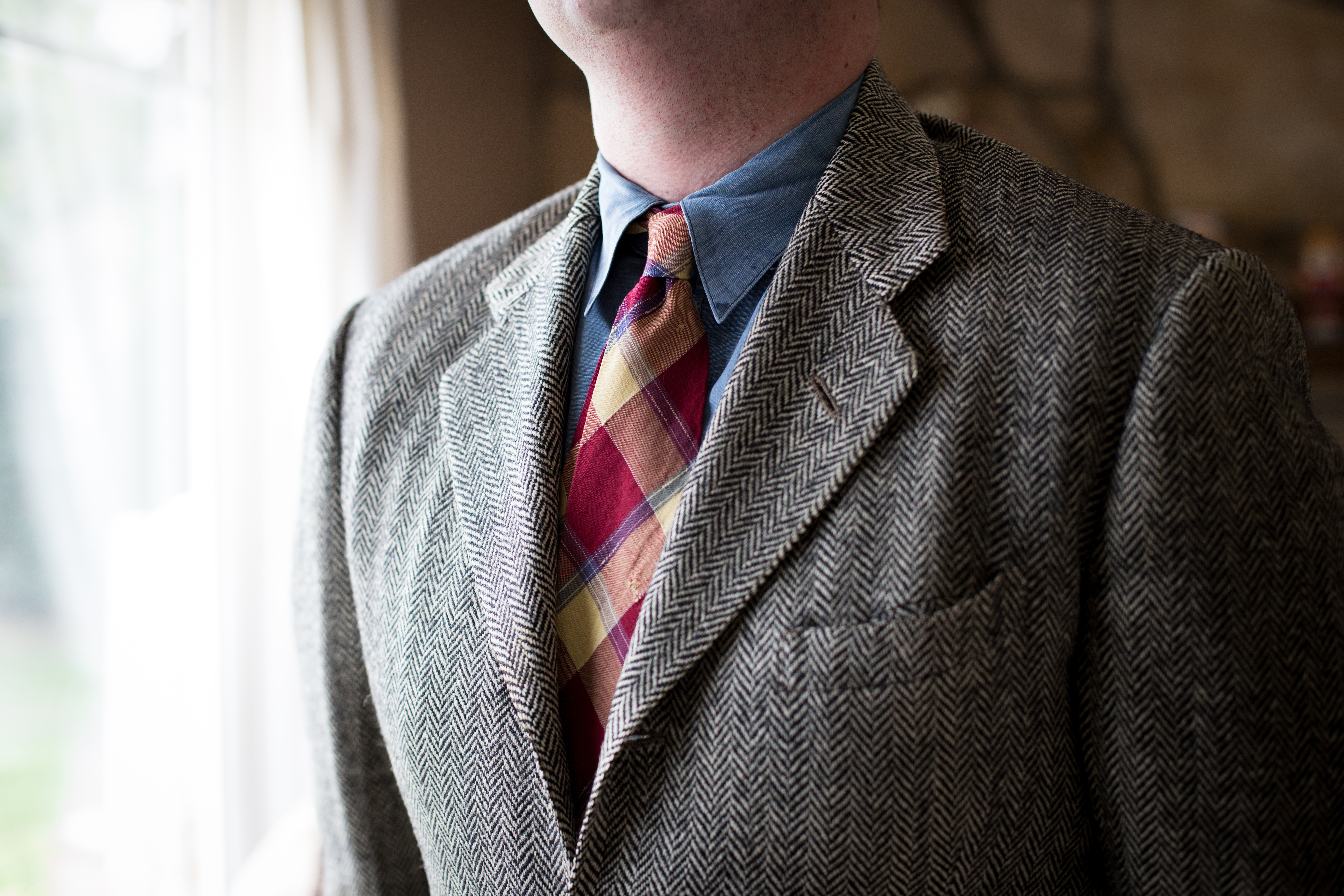 I wish he added a pocket square though. 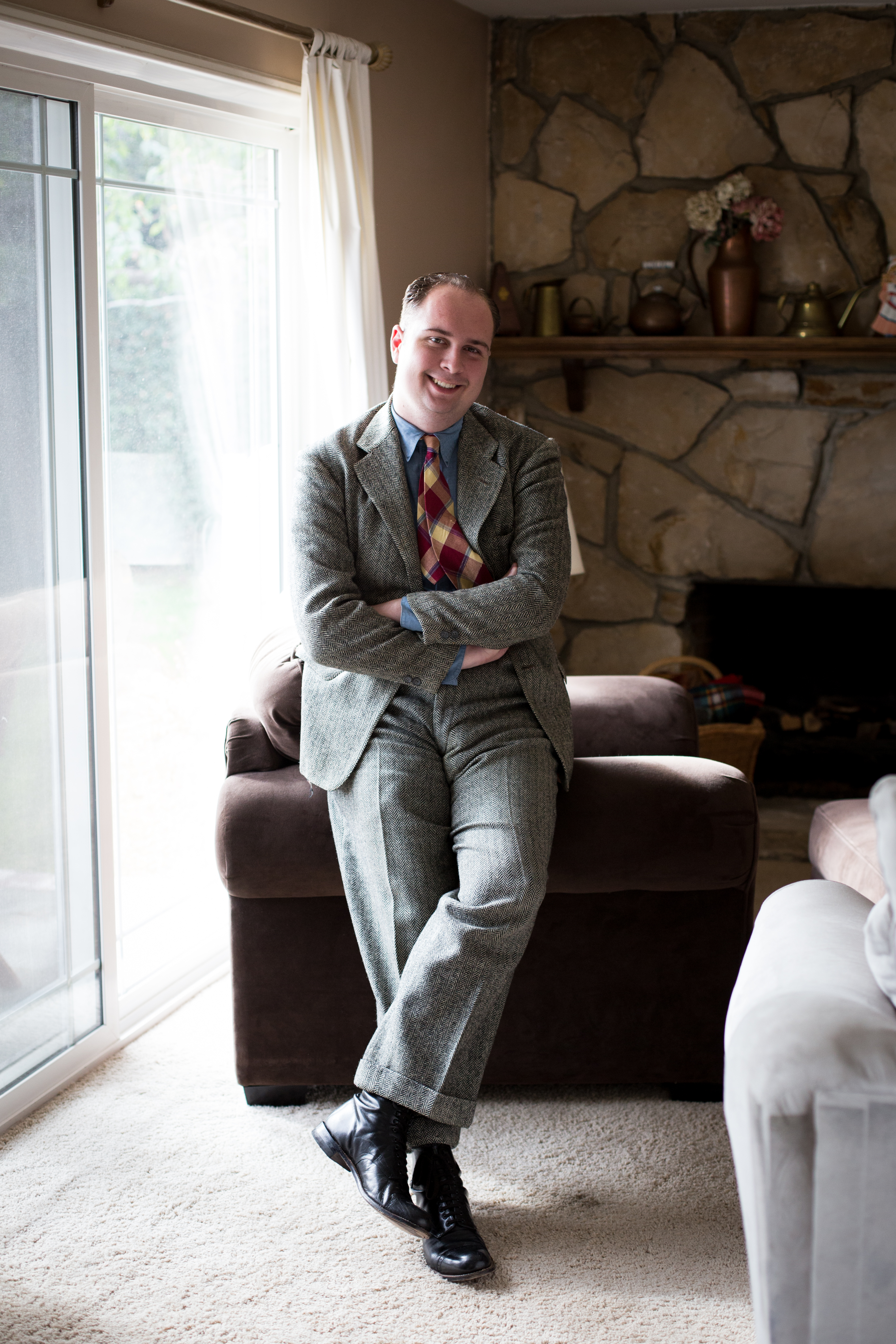 I hope you enjoyed this latest edition of “What We Wore This Week” and its focus on the “old-school cool” pattern of herringbone.  If you don’t have at least a jacket in the fabric, I say get one.  It can be worn with trousers (as you saw on me) or even with slim indigo denim. As long as you know how to combine patterns, you’ll have a great fall jacket!

Don’t forget to check your thrift stores for them. They a really are abundant. It might take a few trips and will need some careful hunting, but cheap “vintage” is much better than paying hundreds for new or bespoke. Just have your tailor ready.