Pitti Uomo (for Spring/Summer) has come and gone and like always, a plethora of street style pictures have flooded the internet.  In the past, we’ve looked at classic menswear ensembles from The Armoury and Shibumi-Firenzi but our tastes have certainly evolved. This time we dissect and replicate a look from Mr. Yasuto Kamoshita, the man behind Camoshita.

A lot of people have the wrong idea about Pitti Uomo. Yes, there are guys who look like this (which is fine, just not what this blog advocates) but there are also guys who dress like this which is more in line with what the blog advocates.  Hell, we’ve even talked about preferring subdued looks from Pitti Uomo.

Honestly, while I do like the classic looks from Pitti courtesty of The Armoury, B&Tailor, and Brycelands, I’ve found myself silently searching for something else that excites me.  Striped shirts and foulard ties (which is essentially “Ethan style”) are great but what about doing a twist on classic menswear?  That’s where Kamoshita-San comes in.

As we’ve explored in a previous post, Mr. Yasuto Kamoshita has some killer style.  He is the head of his private label Camoshita United Arrows which blends ivy-inspired detailing with soft Italian construction.  The Camoshita suit that I have is a great example of this as it looks like traditional sack suit (3 roll 2, medium lapels) but it has no padding whatsoever.  It’s the most comfortable garment that I own.

You can see this “easy going” approach to tailoring his own style. He’s probably one of the most natural looking guys in the tailoring world and is featured numerous times on street style accounts the world over.  It’s doubly interesting for me, because I see that he loves to blend different aspects of vintage American fashion together.  It might be a bit jarring for True Vintage purists, but I definitely enjoy it.  Personal style means that it’s what you feel is right. This first outfit is a good example of Kamoshita-San’s love of vintage style.  The herringbone three piece suit with 3-roll-2 configuration and use of a tab collar is very 1960’s ivy; the choice of repp tie makes this undeniable.  It’s a classic combination that has just enough personality to make it stand out against the clear-cut English or Italian influences that most people take cues from at Pitti. Here’s a great example of some era mixing.  It’s obviously very 1960’s ivy due to his use of a 3-roll-2 seer sucker suit with black tassel loafers (pennys would’ve been the “correct” choice). Instead of a repp tie, Kamoshita-san uses a bold, pseudo palm tree motif piece to make his outfit different.  To some it might be a classic case of subdued, ground-er pieces with one bold piece, but to me, it looks like someone is blending 1960’s suiting with 1940’s necktie designs.  Pretty cool right?

At Pitti Uomo 92, Kamoshita-San killed it again.  At first he looks like he’s wearing a nice brown suit with an interesting tie, but it just gets better once you details.

Can you see the era’s he’s mixing yet? If you give up, I’ll tell you the answer.

Let’s talk about his suit first.  The suit jacket appears to be modeled after the classic 1930’s single breasted peak lapel suits.  While the shoulders have significantly less padding, the influencer is clear due to the lapels.  The peaks are pointed and slightly horizontal while  the lapel itself lacks a belly; it creates a sharp “V” down the torso. Just compare this suit to a 1930’s example.  The lapels are very close!  Most lapels today have more of a  rounded belly.  The trousers have been modified for more contemporary use with a low waist yet feature double forward pleats, a more English detail.

The shirt is again a tab collar, with a very short overall length.  The striping itself is a nice detail, which is different enough than the bengals and plain ones that dominate the 1960’s ivy style.  It’s a tough era to place for most, but it definitely looks late 1920s and early 1930’s for me.  Why? Well just compare it to this shirt worn by the Duke of Windsor.

Lastly, we have the tie.  You can probably guess by now that his tie is very, very, very 1940’s influenced.  I know that I keep saying that we’re going to make a “tie by era” post in the future but just trust me on this! It’s overtly bold, which makes it very different than the more “conservative” ones of the 1930’s (or 60’s for that matter).

Putting it all together is a great way to make your own spin on the Golden Era style .  Kamoshita-San has certainly mastered this on his own and this is why we love him for it. I’m surprised to say this, but I’ve loved his stuff way more than the recent outfits on the Armoury! It might just be because this is much more vintage based instead of “international classic”.  Obviously this outfit won’t swing at formal events, but it works when you’re dressing for fun.

Kamoshita-San is so cool that he even wore the same suit with a striped tee shirt.

Replicating the Look with True Vintage

I was so enamored with Kamoshita-san’s look that I decided to replicate it with vintage clothing.  Yes, I know that vintage style is the theme of this blog, but this time I’m using a true vintage suit just to show you that certain vintage suits and jackets can be classic! Honestly, I just want to free your mind of the assumptions that vintage suits are all zoot suits.  It’s also much different for you to compare the style you see in illustrations and photographs to the real thing. 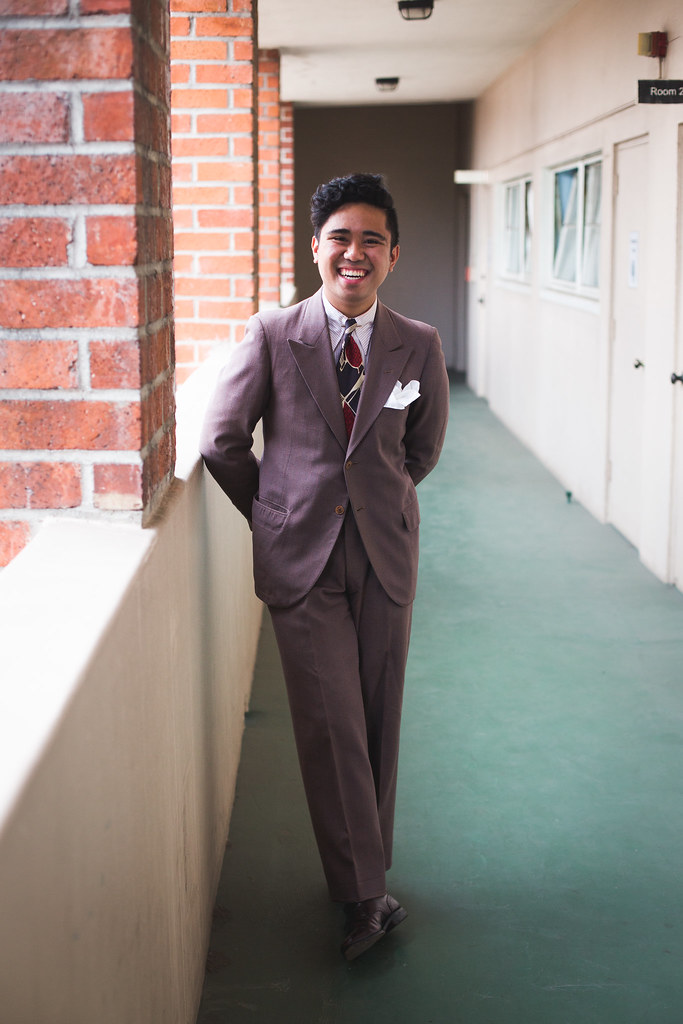 I’m wearing the 1930’s peak lapel suit that I wore to our first ever coverage of Dapper Day. It may not be the same shade of brown (mine is more taupe while his is almost orange), but it’s the only single breasted peak lapel suit that I own! The lapels are a moderate size and the suit features a fantastic button placement that is slightly high, to compensate for the shorter length of the jacket; this was the suit cut of the mid 1930’s.

The overall fit of the suit is pretty comparable to modern sartorial standards: high arm holes, and a slightly draped chest that provides figure without being too tight. The pants are high rise but are flat front. It’s interesting to note that 1930’s American suits didn’t really embrace pleats until the late 1930s; they were in full-swing in the 1940s and early 1950’s.

I’m not a fan of the structured shoulder padding in the suit.  It’s not as bad as the 1940’s suit I wore to the 2016 Spring Dapper Day but the feature prevents me from wearing true vintage clothing on a daily basis since I definitely prefer something less padded or unstructured.  In any case, it makes a stark difference between the slimmer trousers that I wear, making me appear too top heavy.  I mainly bought the suit because it’s an amazing suit with gorgeous fabric (light taupe brown with double orange stripes) and fantastically shaped peak lapels.  Also, single breasted peak lapel 1930s-1940s suits are rare as hell.

It was sold to me by a fellow vintage friend on the East Coast for the extremely well deserved price of $350.  A bit high for vintage suits, but appropriate for a suit of this color and detailing. 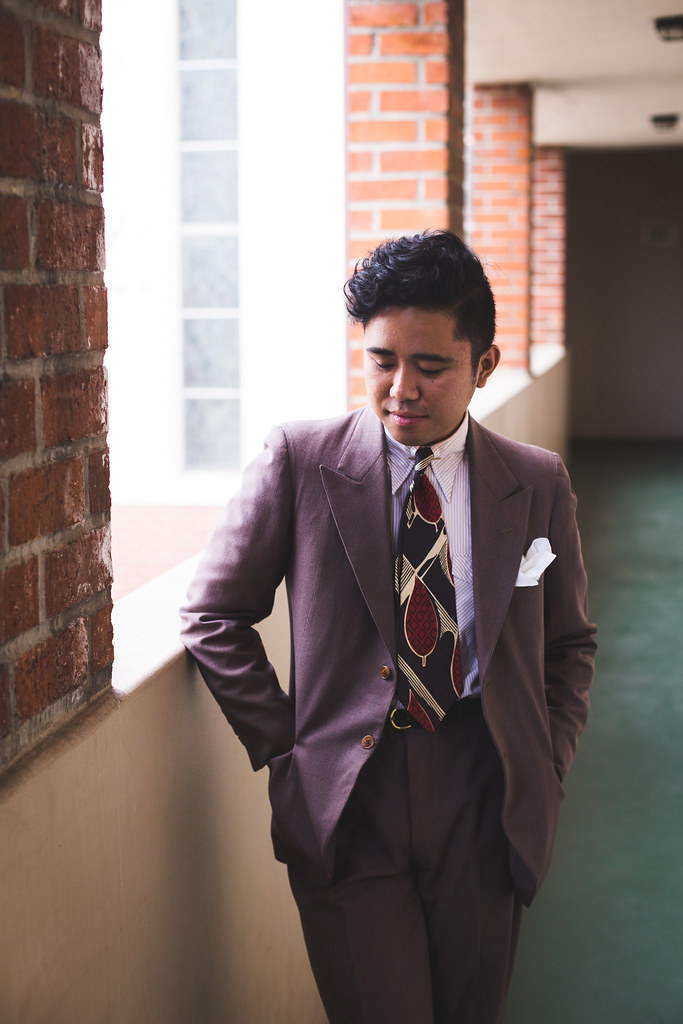 I don’t own any true vintage tab collar shirts because I like the option to wear my shirts unbuttoned.  That’s why I went for a 30s-40s look with the soft spearpoint collar. It’s not exactly the same as Kamoshita-san’s shirt, but it’s still got the vintage vibes, especially with the use of a collar bar.   The shirt also features a light brown stripe, which is a bit more versatile than the bolder, rust colored ones that Kamoshita-san has on. 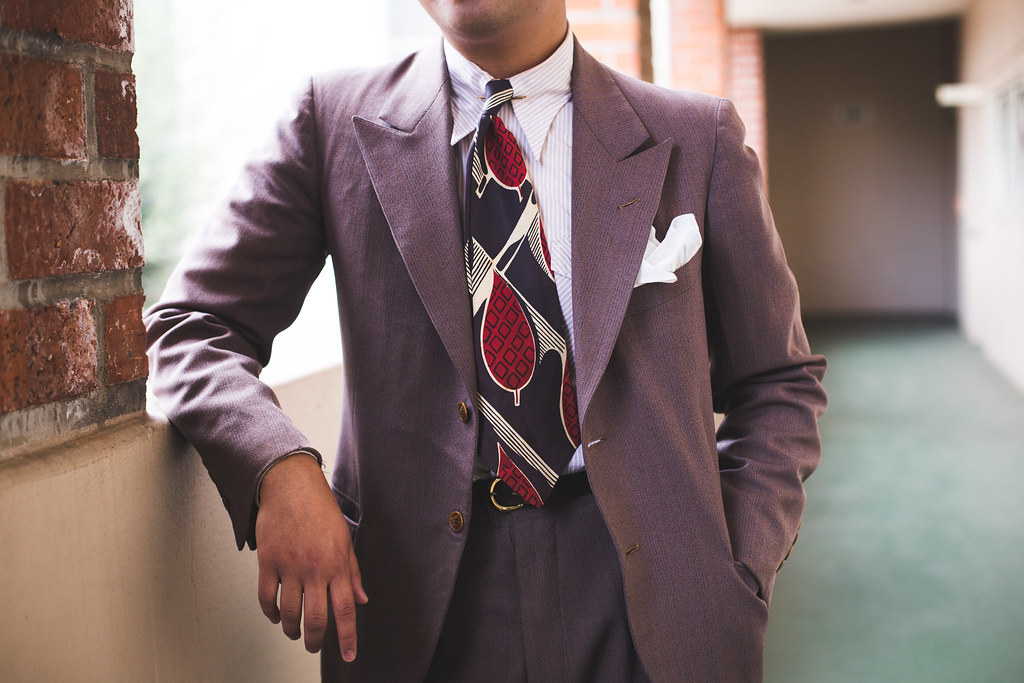 Lastly, we have the tie.  Now this tie is a bit crazier than what Kamoshita-san has on simply due to the fact that it’s a bit more abstract in design.  It looks like an attempt that a bold over check with some tear drops? I don’t know, but it at least incorporates similar colors; I will say that mine is more blue focused while his is more red focused.  It was the only tie I own that looks like his! Still worked though, don’t you think? 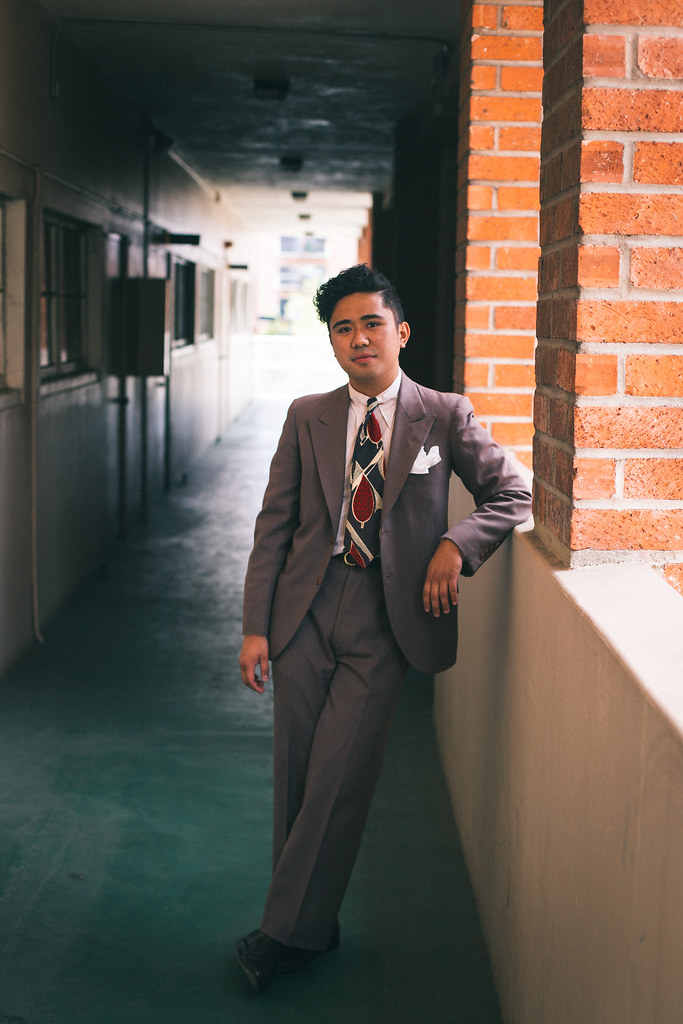 I think that this was a pretty straight-forward recreation!  The ideas are all there: brown peak lapel suit, striped shirt, and bold red/blue tie.  However, mine is much more subdued while Kamoshita-san’s is saturated.  Either way, I am very glad that there’s someone out there in the world of contemporary (yet classic) menswear that is bringing 1930s/1940s style to life!

Now I’d like to close with some words about the suit.  Yes, the suit is true vintage with some vintage details (wider legs, padded shoulders), but if I didn’t tell you, would you notice? I don’t even think I would be able to notice, if I didn’t already have years of research and experience with vintage clothing.  I could modernize the suit by tapering the legs and removing the padding, but I simply can’t do that for my pre-1950s clothing; I want to preserve the historical look (1960s and 1970’s can be chopped up though!).

Overall, I think the suit is very classically designed.  Wider legs are coming back, which might mean that I could wear this suit at Pitti Uomo and have it mistaken for something made by Sartoria Dalcuore or some other bespoke house.  It’s time people learned the true appeal of the 1930s/1940’s; classic designs that are just different enough to stand out and point to the past.  It definitely put an edge for this recreation of Mr. Yasuto Kamoshita’s fantastic outfit at Pitti Uomo 92.  Can’t wait to see if he goes in a similar direction for the Fall/Winter show later on this year!