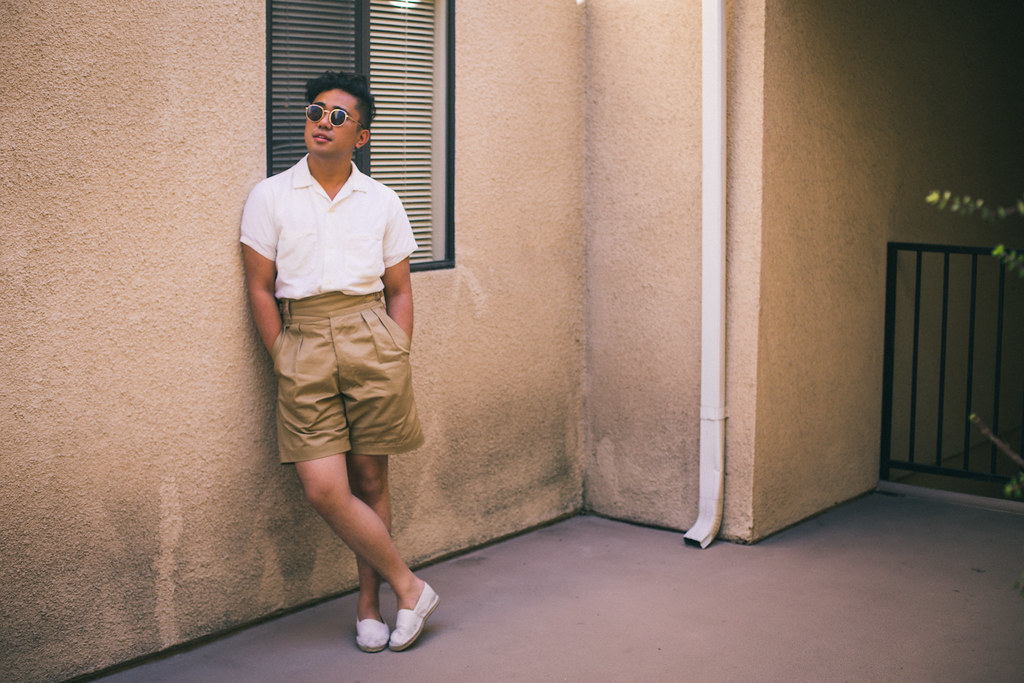 My love of high waisted trousers and pleats has finally culminated to me searching for ghurka shorts which feature a high rise and double forward pleats.  Amazingly, they’re great and I wholeheartedly recommend them to you.  Why wouldn’t you want something like these for your vintage or vintage inspired wardrobe?

Pleated shorts should be an abomination.  They’re the so-called uniform of old guys everywhere due to their often unflattering fit and length.  We’ve heard this rhetoric before haven’t we?  People have called out multiple classic pieces in the same way: double breasted suits, spearpoint collars, high rise trousers, and pleats.  It takes great tailoring and fantastical details in order to make something look good, and that’s typically what we do here on this blog.

Obviously, you can’t wear high rise trousers all the time even if they are made of linen, Palm Beach, or gaberdine.  A SoCal native needs to have shorts.  My problem was that no one really makes high waisted shorts anymore!  I do have a pair of slim fit above-the-knee shorts from Banana Republic and while they’re great for basic as fuck outfits, they don’t really fit my desired aesthetic.  After moping around, that’s when I found the Ghurka short.

Ad from the 1970’s Banana Republic for repro Gurkha shorts.

Gurhka shorts have their roots (like almost everything in menswear) in military clothing. You can read more about them from Put This On, but they were basically U.K army khaki shorts cut with double forward pleats and double belted closure.  Apparently this was done to allow the wearer to easily adjust the weight as it fluctuated in service.  Most pictures that people post are of them being worn on active duty.

Even though they were commonly seen as military surplus, the design was later transferred into making shorts with the gurkha details in the 1930’s.  I think this provides so much inspiration for summer, don’t you think?

Eccentric alternative fastening on these shorts.

I’m not entirely sure on what exactly makes up a “gurkha short” but to me, it appears that the pleats and belt-adjusters are needed.  Obviously there were regular pleated shorts in the 1930’s , so I’m going to include them here because I still think they look great and offer some more styling inspiration.

As you can see, they were at one time available in khaki, navy, and light grey, the classic colors for shorts.  Sadly, I’ve never seen a surviving pair of these 1930s-1940’s shorts ever.  Either they were thrown out or some lucky collector is sitting on these bad boys.

They faced a small resurgence in the 1980s and weren’t seen again until small circles of menswear brought them back today.  Now, the gurkha short has obviously been updated with a slimmer fit and lower rise.  Unfortunately they’re still hard to find easily, with only a handful of brands making their own version of it.  True vintage ones (in the khaki or olive green variety) or straight military reproductions come up on eBay once in a while though!

Need Supply’s Gurka, though theirs doesn’t have the belt-adjusters.

Unknown gent rocking classic unknown brand gurkhas in an amazing way.  Reminds me of the Laurence Fellows illustration that I included above!

Even after hounding eBay and using my vintage contacts, my search for gurkhas was coming to a disappointing close.  When I went to London, I saw the Real McCoy’s shop have a couple of gurkha’s for £150; that was way over price point for a casual pair of shorts.   I eventually saw a fellow MFA redditor rock some from What Price Glory (WPG), a military reproduction site.  I had seen their gurkhas during my search, but I wasn’t sure on the fit.   He said that they fit true to size, but they need a hem.  Looking at their listing, I had to agree: the WPG gurkhas had a whopping 12 inch inseam.  However, I did like that they used sturdy cotton drill and feature a button fly instead of zipper.  That’s pretty accurate for the time!

After only two days from the purchase date, I received my gurkhas.  I will say that I thought that it would be delayed since my invoice said that a signature was required, but they were delivered without any issues.  After putting them on, I saw exactly what Eric was talking about.   These were huge.

You should have seen my dad’s face when I put them on.

They go past my knees!

I knew that tailoring had to be done, so I took them to Ruben straight away.  I forgot to measure the before and after, but I definitely had length hemmed up a bit and the leg opening tapered slightly.  I didn’t to make them too slim since the “wide-ness” is  characteristic of the classic 1930’s gurkha! 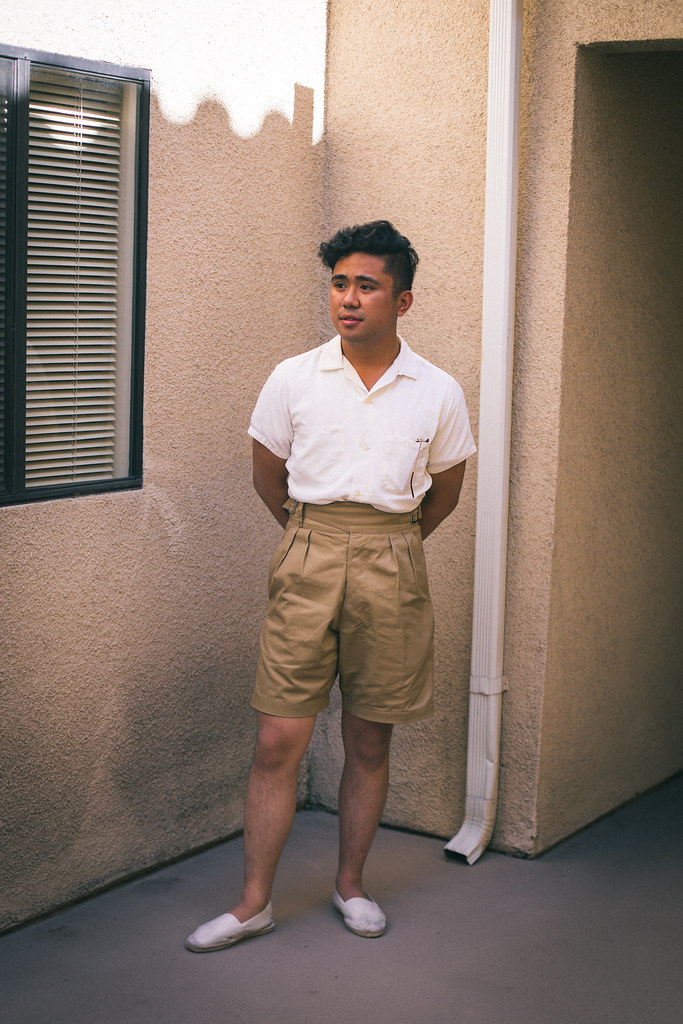 Having them tailored was a good (and necessary) move because I love these shorts.  Now I can do more vintage and vintage-inspired summer outfits! For my first use of the shorts, I decided to go simple instead of wear a crazy plaid sport shirt like the Fellows illustration.   However, I think that this still gives off the same “vintage man on vacation” vibes!

The 1950’s rayon short sleeve loop collar was a good choice since it as lightweight and adds authenticity to the outfit.  It’s pretty close to what the guys were wearing in the illustrations.  I could have also gone with a 1930’s polo. What do you guys think? 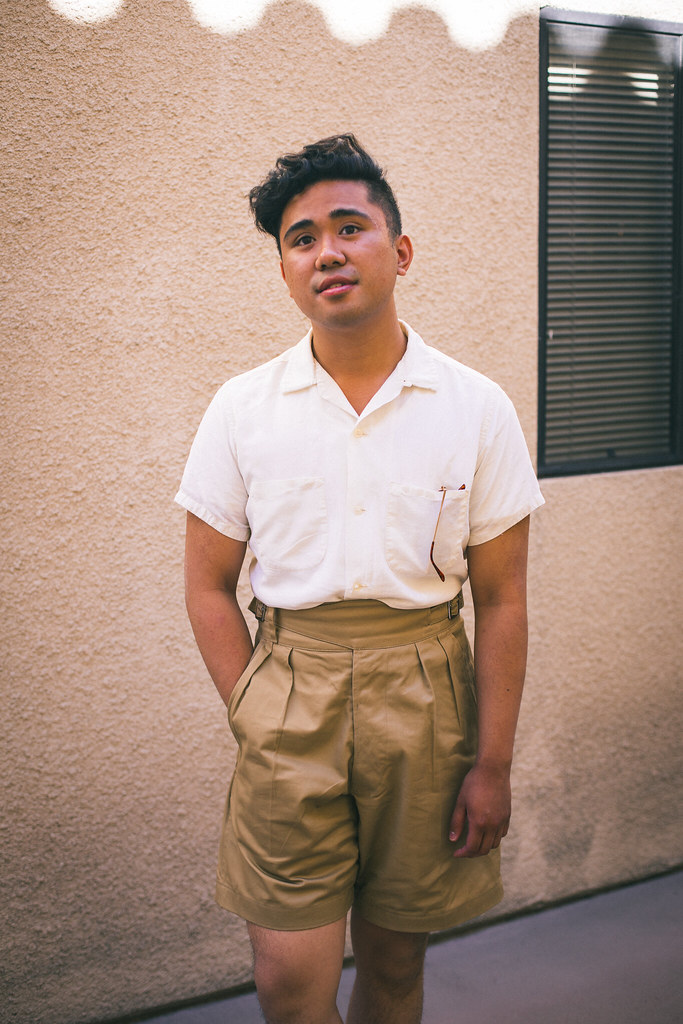 The outfit does have some slight safari vibes because the shirt is so plain and the shorts are well, these shorts but I think the look is pretty good.  I’d probably unbutton the top button (or two) and wear it to the beach! 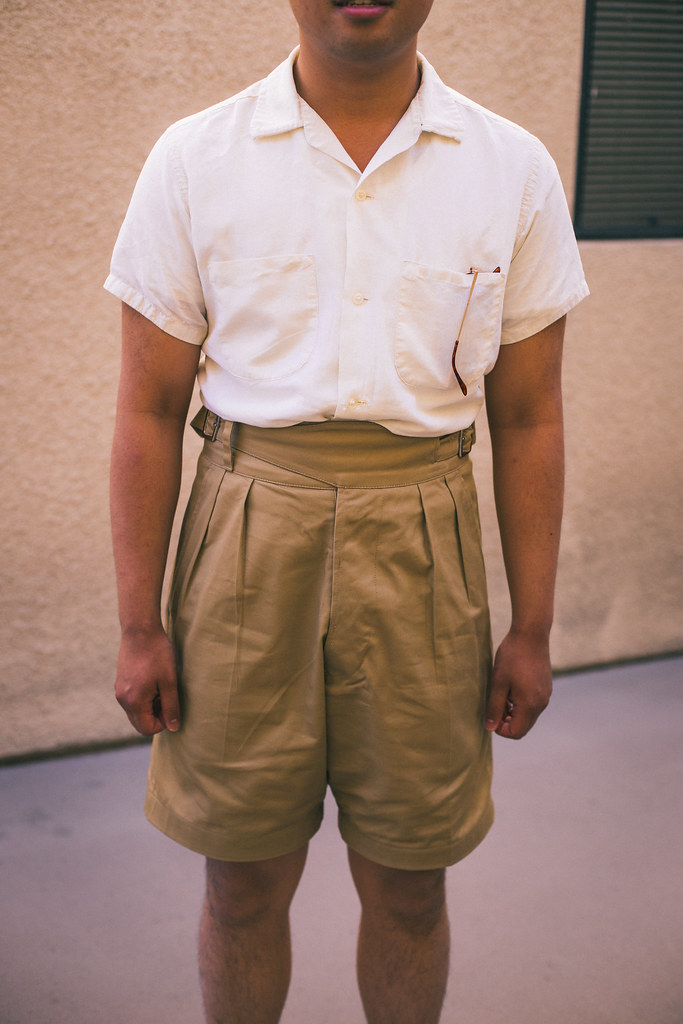 The fit definitely improved thanks to Ruben’s tailoring.  The silohoutte isn’t as “flared out” as before, but the shorts themselves are still very comfortable thanks to the double forward pleats.  The side adjusters allow me to have a great fit on my waist throughout the day, especially if I eat a big meal.  However, it does make for a tricky situation if I have to use the restroom; I have to undo the sides and the fly if I want to be able to take them off. 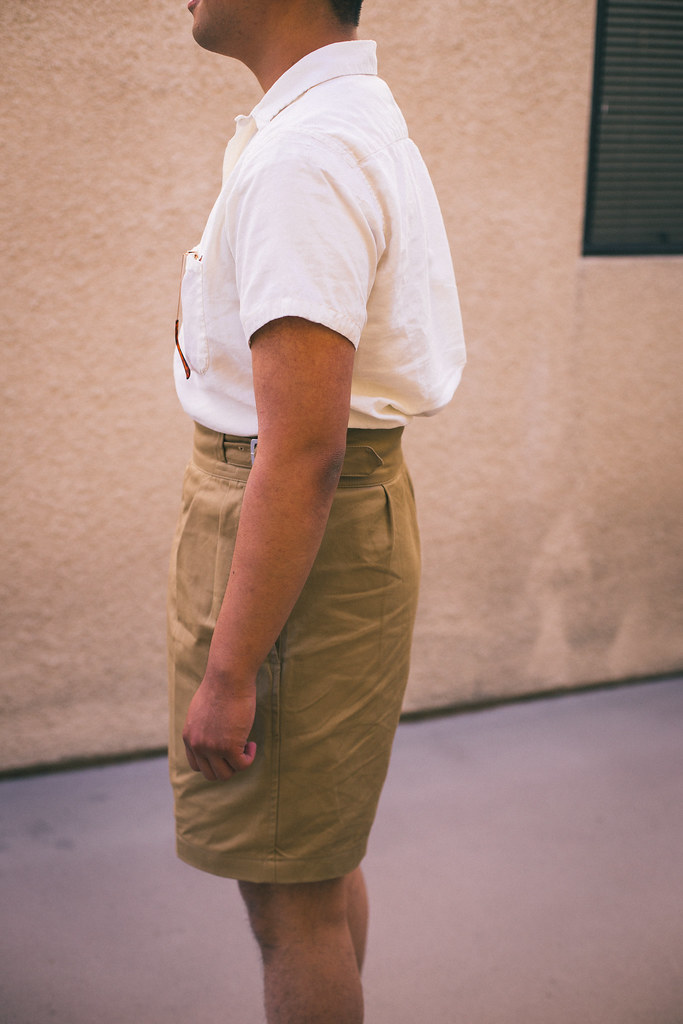 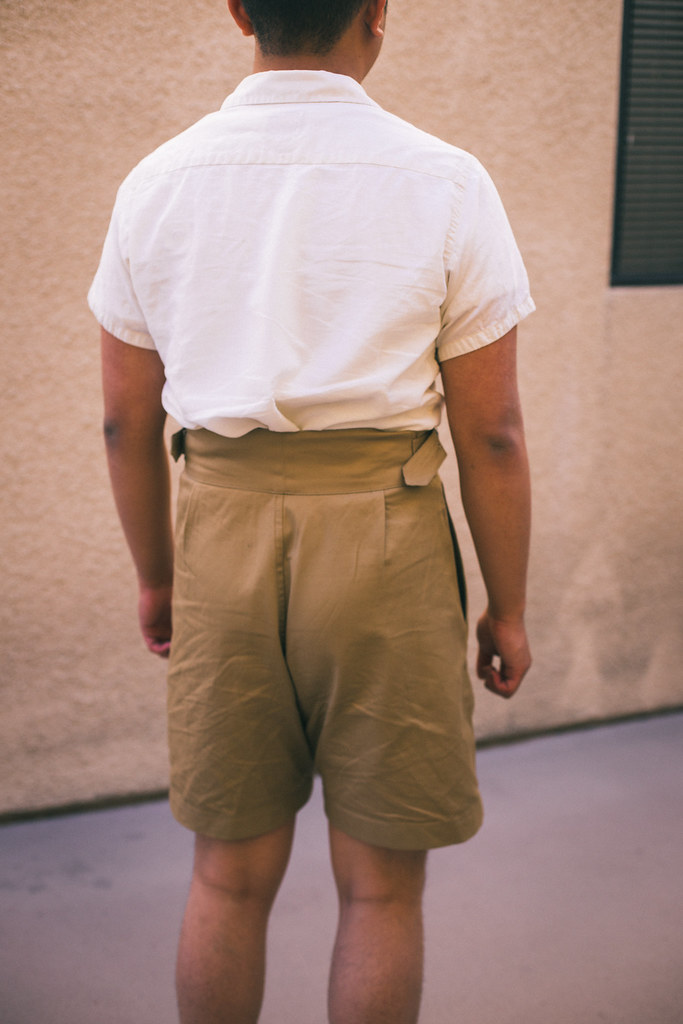 The lack of back pocket is extremely annoying since it means that I have to put my wallet in the front pockets.  My EDC for shorts pockets is usually phone, keys, and wallet but I try to avoid this as much as possible in order to keep a clean leg silhouette. I get around this by wearing a jacket or brining a bag, but I’m probably not going to have either of those things since shorts means that I’m being lazy/comfy.  I guess I’ll just have bulging pockets, though I hope that the pleats help mask this. 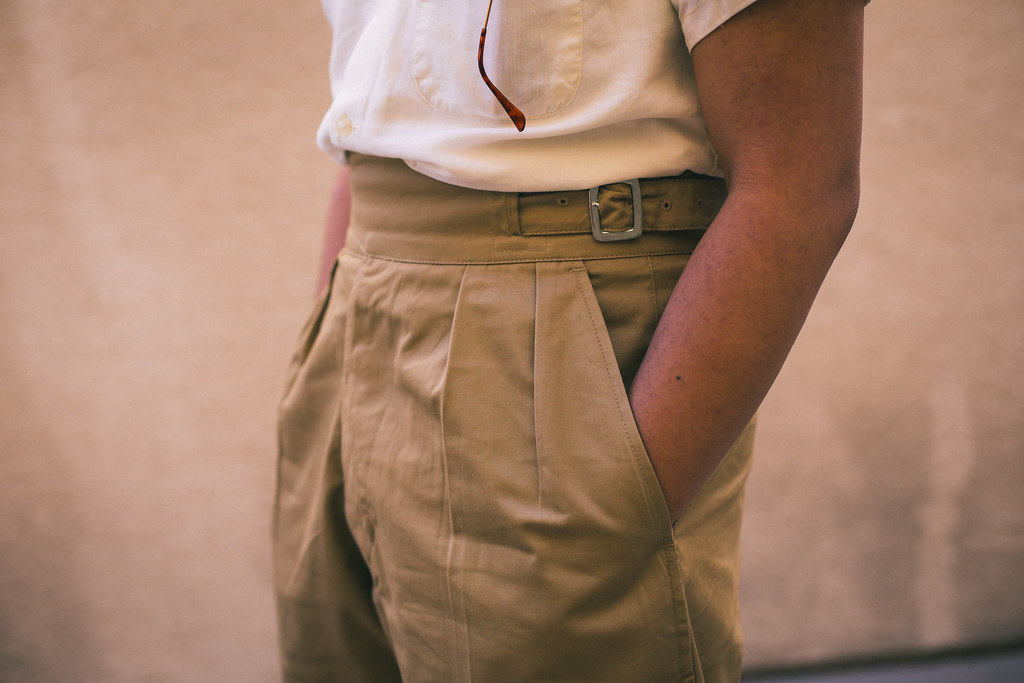 Details are so important. 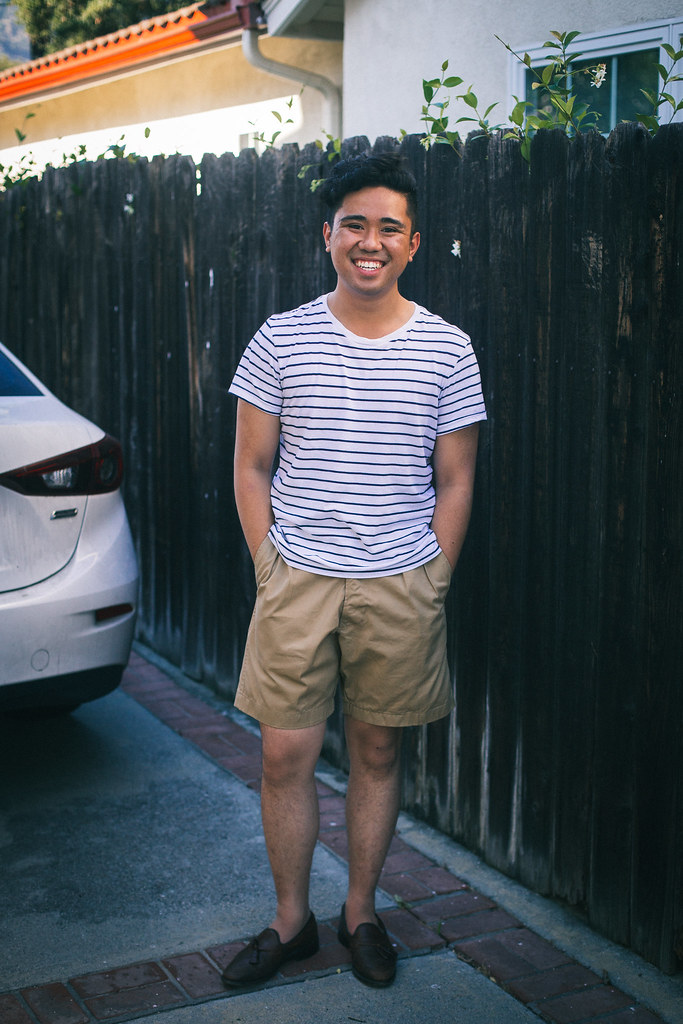 Wearing an untucked shirt can help mask “the weirdness” of the gurkha shorts, but I think you lose the intended effect if you do it that way!  Even if I’m wearing a tee shirt, I’ll probably tuck it in. 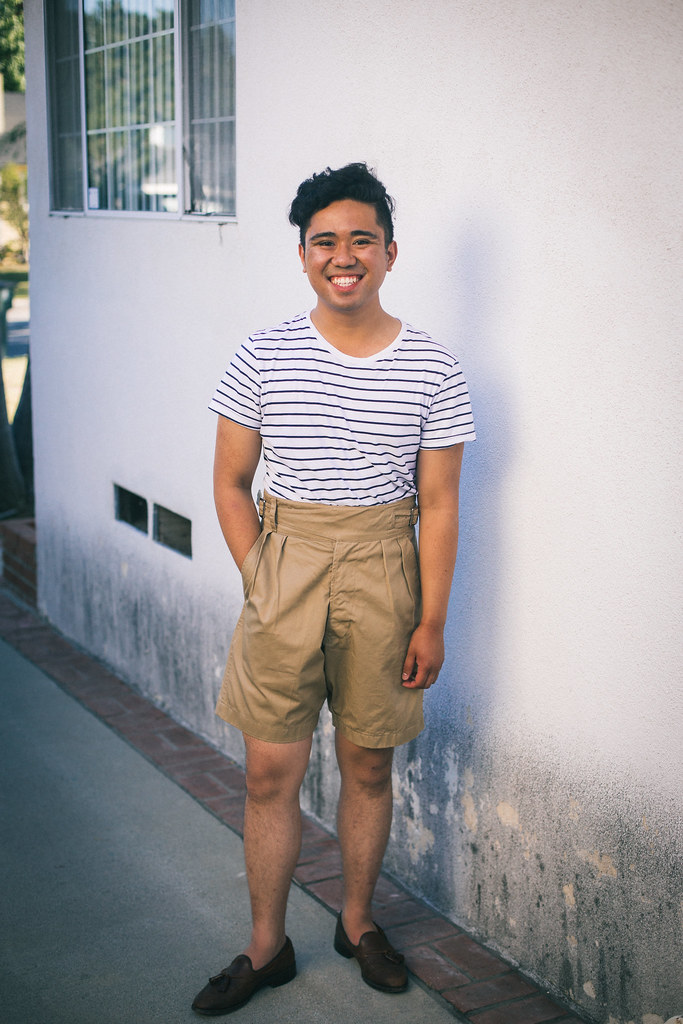 As a lover of high-rise trousers and as a man with big thighs, modern shorts (will still effective for regular stylish guys) just don’t cut it for me. For a long time I thought that I would never be able to find pleated, high rise gurkha shorts since even modern iterations had well, modernized them; finding true vintage was also proving to be impossible.  Luckily WPG came to the rescue with their truly authentic gurkhas! Yes they were slightly too wide in the leg opening and too long, but that’s a simple and cheap fix from an experienced tailor.

I will say that while the WPG ones are cheap (around $40 with shipping), they are of okay quality.  The buttonholes on the fly and side clasps are already fraying, though it might be due to my constant adjustment of them.  I can’t imagine what would’ve happened if I bought the £150 ones from The Real McCoys!

As climate change rocks our planet and results in an extremely hot (and late) summer, you really can’t expect me to rock linen trousers all the time. I’ll probably be in these ghurkas almost everyday.