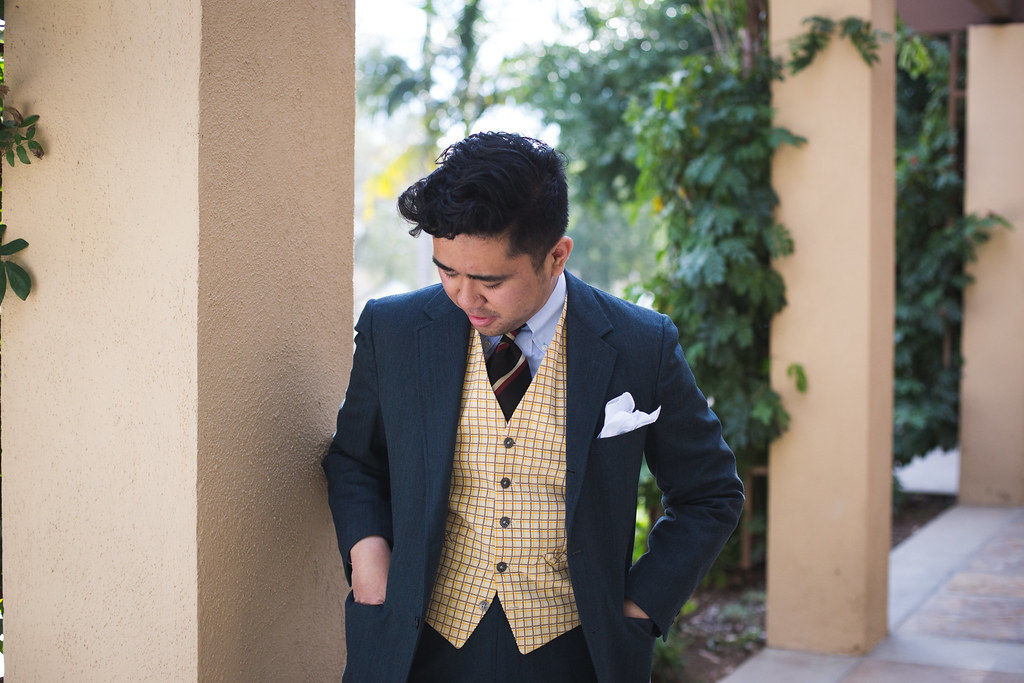 One word, three syllables: tattersall.  It’s the perfect odd vest to add to your wardrobe if you want to give yourself a vintage pop!  Leave those plain tweed waistcoats at home; this is how you do it.

The tattersall waistcoat has been around for a long time, like most of the stuff we wear, but its seldom worn by many people.  Because of that fact, it definitely makes anyone wearing it look “old school”.   The fair isle sweater vest is another piece that shares this quality.  Whether you go with a solid waistcoat/vest  or one with a pattern, wearing “odd waistcoats” is a way to step up your sartorial game.  I’ll probably write more on the subject but fo now, the  Gentleman’s Gazette has a great article on wearing odd waistcoats and vests.

The tattersall pattern is basically a check, with dark lines on a light base.  Traditionally, the main color on the vest was yellow, while the lines were white, red, or black.  It isn’t exactly a “1930’s” staple, but it has its roots in English hunting attire.    While they did exist in the Golden Era, I think that the tattersall waistcoat fits in the 1960’s ivy style period!  No matter the period, guys would wear them to add a special pop to their suits and sportcoats. And no, they didn’t wear them without a jacket.

Personally, I prefer waistcoat with a pattern over a solid one since its a more intentional choice! It requires more coordination and thought than if you simply used one from a three piece suit you already own.  Most guys will prefer a herringbone tweed waistcoat (in grey or brown) but I say stay away unless you’re getting a suit with it.  The solid tweed waistcoat is a bit too “hipster” for my taste and I think there are much better options to go for! If you want to go with real vintage style, get a tattersall one in yellow.  It pairs wonderfully with a full suit (which is the easy way to to do it) or with a sportcoat and trousers.  Here are some vintage examples to give you inspiration!

A classic tattersall waistcoat with a brown sportcoat and grey trousers.

Tattersall worn with a suit and button-down collar shirt! 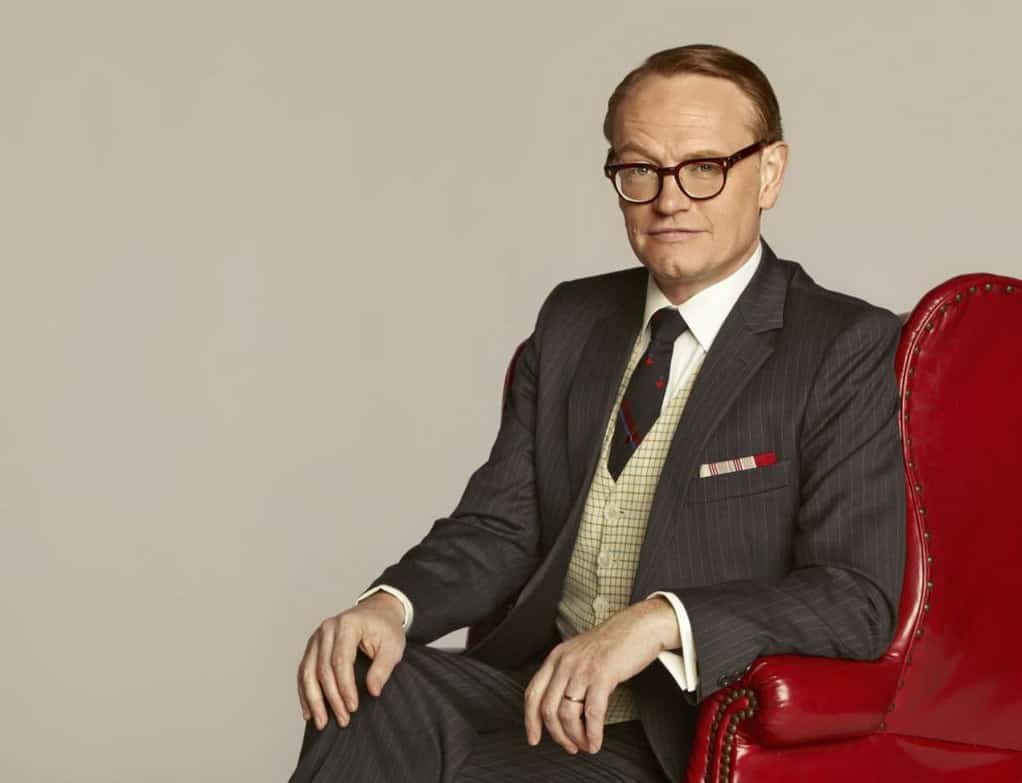 Lane Pryce, showing off his English style with a tattersall wasitcoat.  I wouldn’t recommend wearing the waistcoat with a pinstripe suit though.

Not exactly tattersall but you can see the Ivy vibes. 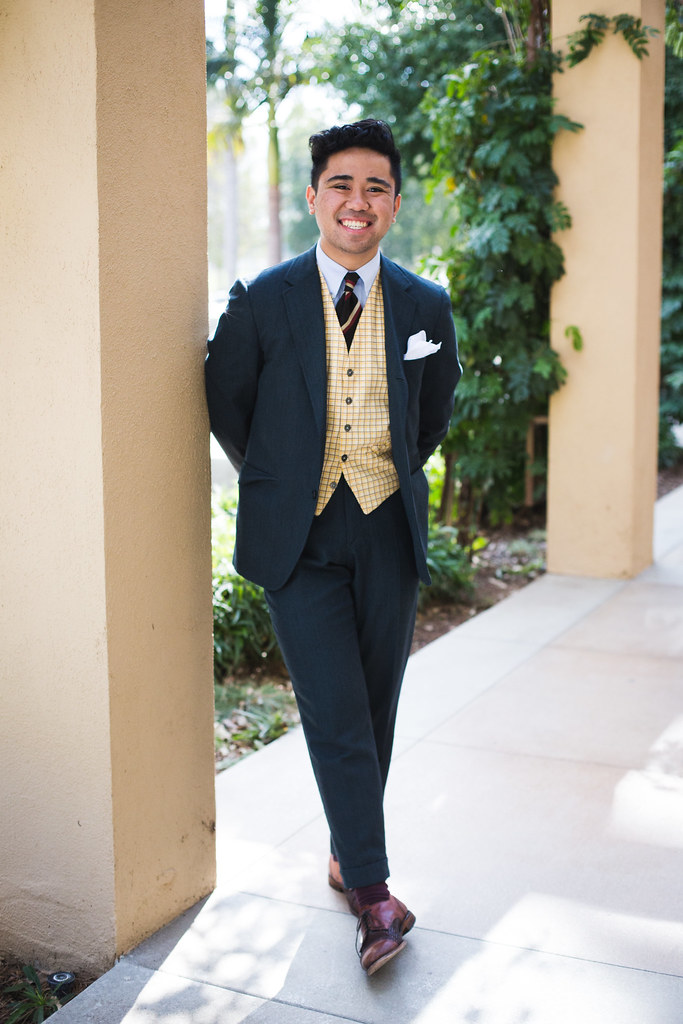 I decided to go full 1960s with my tattersall combo and went with an ivy style outfit! It’s complete with a 3-roll-2 sack suit, button-down collar shirt, and striped tie.  It’s a classic combo (which is evident with the blue suit) but it definitely compares to the illustrations and examples above.  Definitely old school (like a British professor I might add) and adds personality to an otherwise “boring” ensemble!  Yellow’s a hard color to wear but it looks wonderful in a pale tattersall. 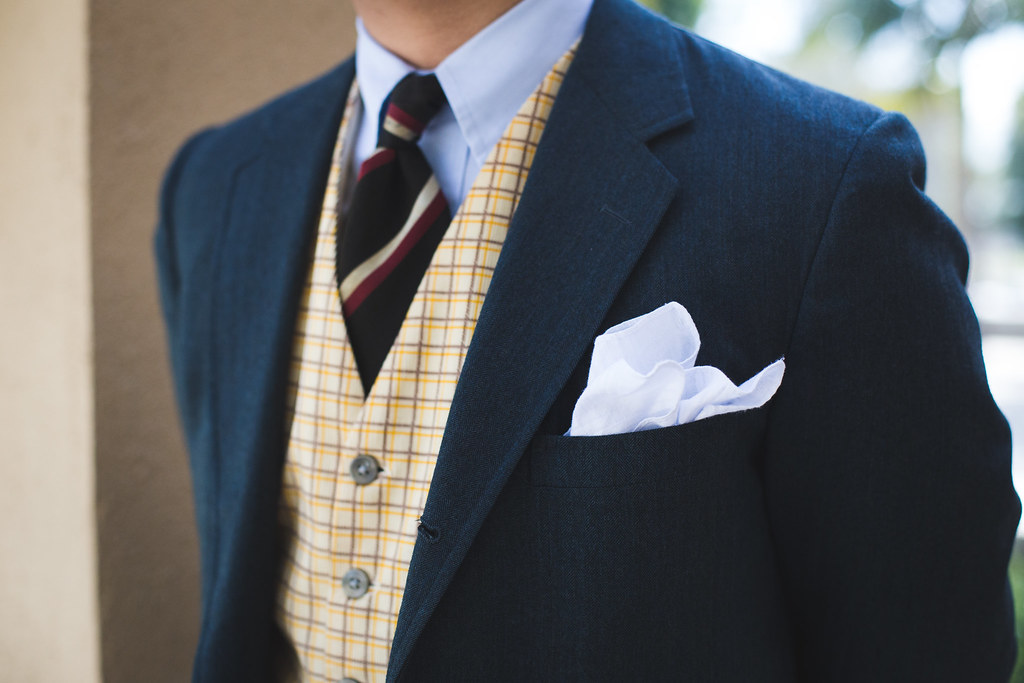 Right away, you can see the visual pop of the tattersall waistcoat, which contrasts with the blue of the suit.  Even though its bright and patterned, I think it still looks very professional when worn with a suit.  It is a bit old school but like most of the “loud” stuff I wear, the key is to pair it with other plain items so that the vest is the star of the show. 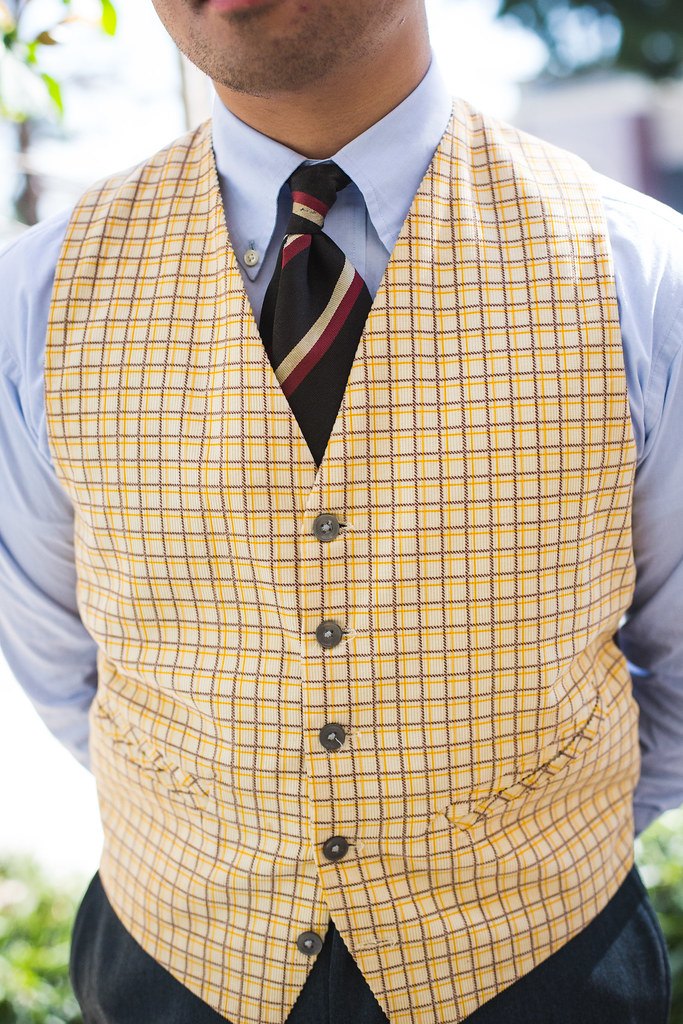 Here’s a great look at my own vintage tattersall waistcoat that I got from Lulu’s booth at Inspiration LA.  It’s cut from a soft corduroy with two slanted jetted pockets.  This picture really shows the detailing of the texture and pattern of the waistcoat. It’s even cut short enough to wear with high rise trousers.  Super cool right? You can’t find this stuff at Banana Republic or J. Crew! 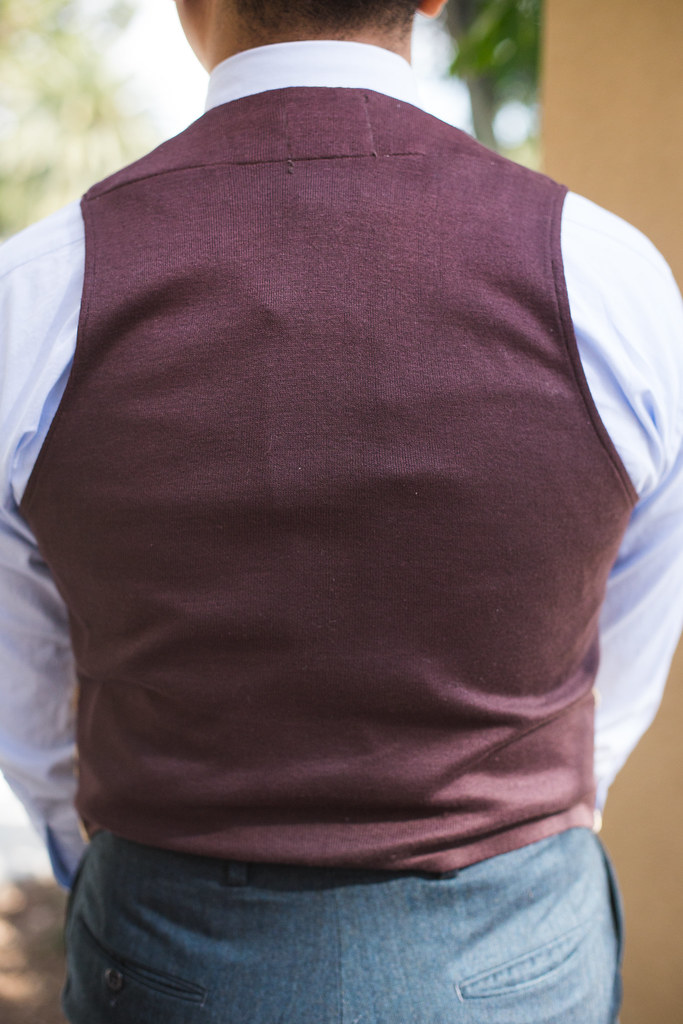 We like to talk about vintage details, so here’s another great one for you.  Instead of a backing made of lining and a buckle belt, this particular waistcoat has a knitted back.  It’s stretchy and comfortable, though there isn’t as much waist suppression as I’d like.  A good waistcoat should fit snugly, almost like a corset! 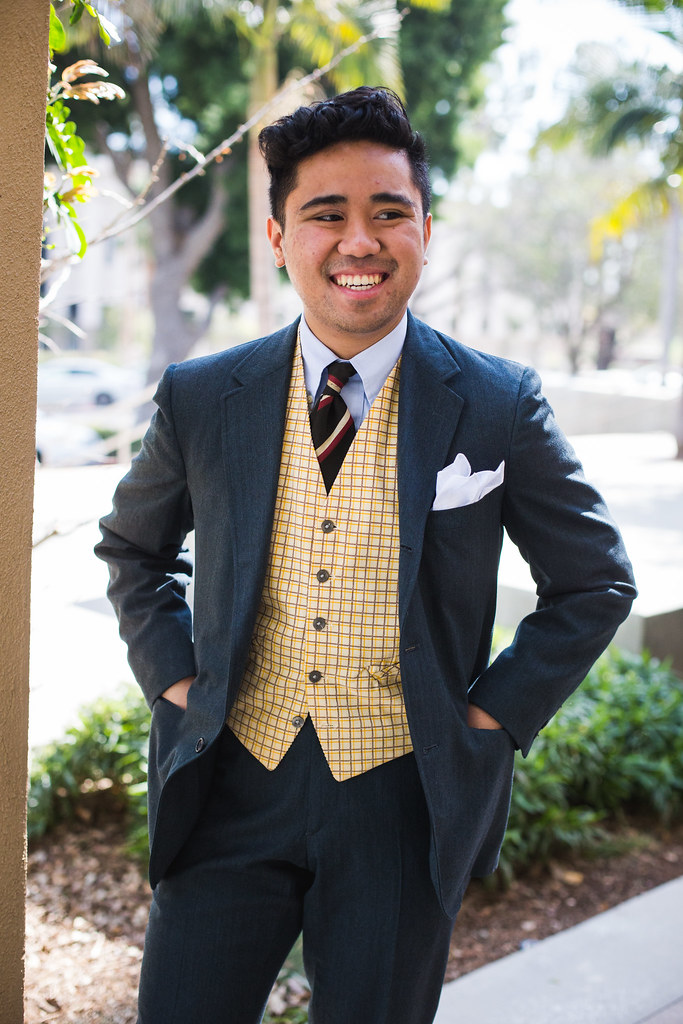 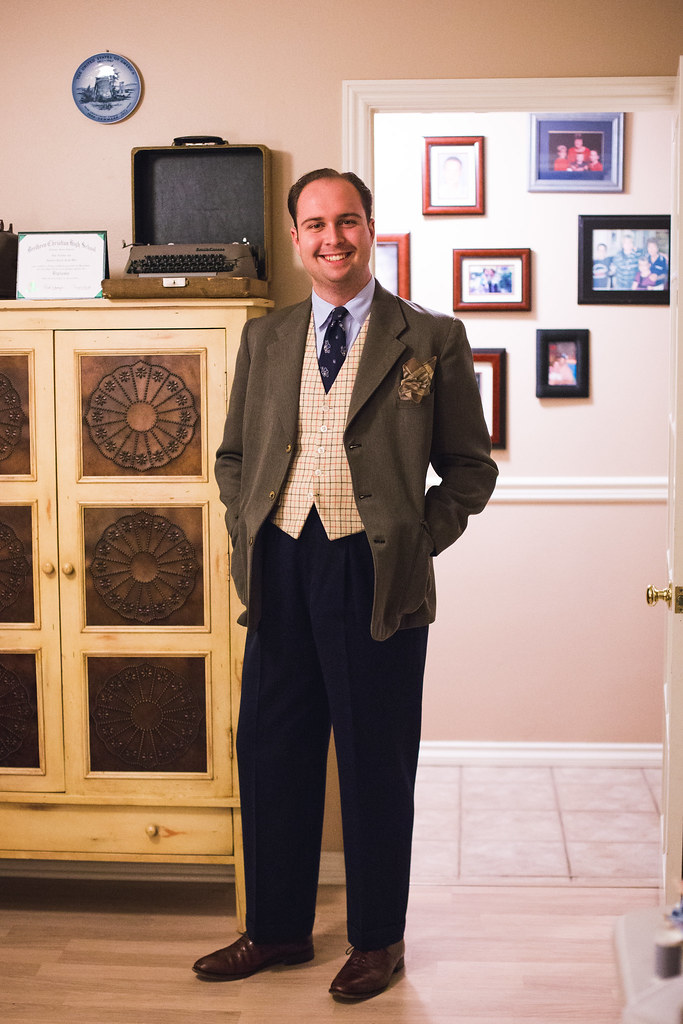 If you want to go a bit more “expert mode” then you can follow Spencer and wear your tattersall waistcoat with separates.  Like me, Spencer knows the power of tattersall and keeps his outfit fairly simple even though he utilizes different pieces.  He wears an olive-brown jacket with navy trousers  which acts as grounding agents to make sure that the vest is still allowed to stand out!  Neutrals definitely allow to have some fun with your outfit.

While mine was cut from bold, double checked corduroy, Spencer’s tattersall waistcoat is wool with the traditional mother of pearl buttons.  It also follows the regular check pattern, which makes it an easier piece to pair. 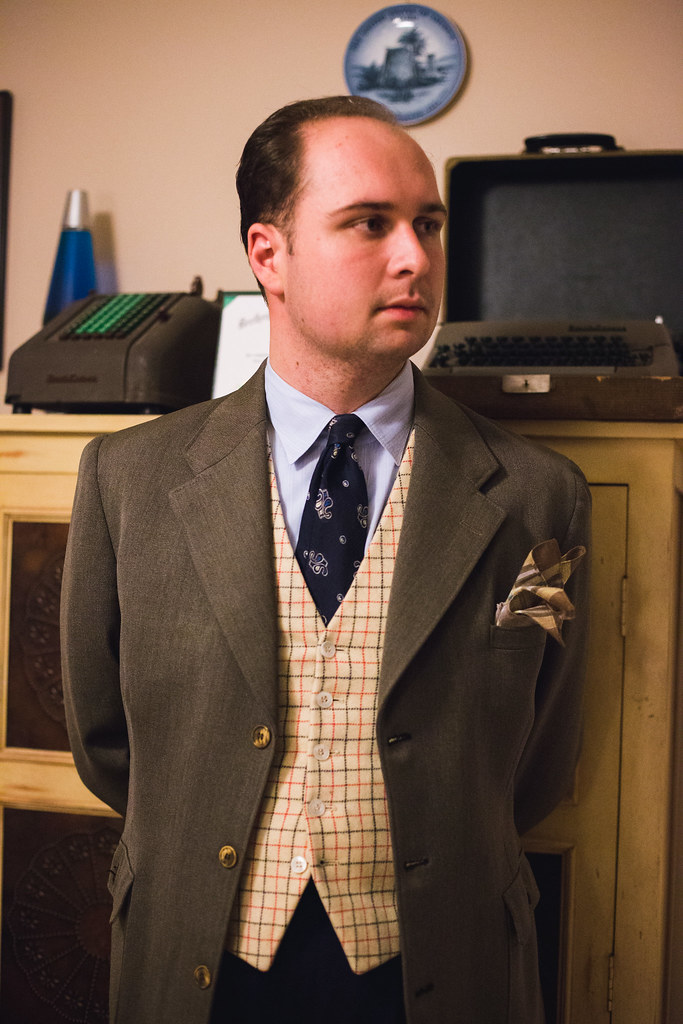 Like I said before, the use of a brown jacket is something more “old school” and vintage than the normal blue or grey jackets.  Adding tattersall to the mix plays that up, but you can see that it’s still tasteful and not too in-your-face. As an extra detail, Spencer echoes the pale yellow in the waistcoat in his pocket square.  Other than that and the paisley tie, the outfit is fairly simple.  There isn’t huge pattern mixing like we normally advocate!

Tattersall, like the fair isle sweater vest, is a great way to add “vintage personality” to your sartorial wardrobe without having to resort to “hipster” methods.  The pale yellow and dark checks of the traditional tattersall waistcoat presents a more intentional addition to your outfit that takes it a step further than the typical brown or grey tweed waistcoats that people tend to favor.  Plus is really pops, whether you wear it with a full suit or a bunch of separate pieces.  As long as your keep things particularly simple, you can pull off this waistcoat with ease.  Just look at how we do it!

I honestly wish that more guys wore tattersall, among other things.  Looking at the past and taking inspiration fort today is the crux of what this blog stands for. Its honestly a weird position as it’s too “fashion-y” for regular dressers but too old school for modern guys.  Hopefully this article helps put your reservations away and gives you confidence to rock the tattersall waist coat!