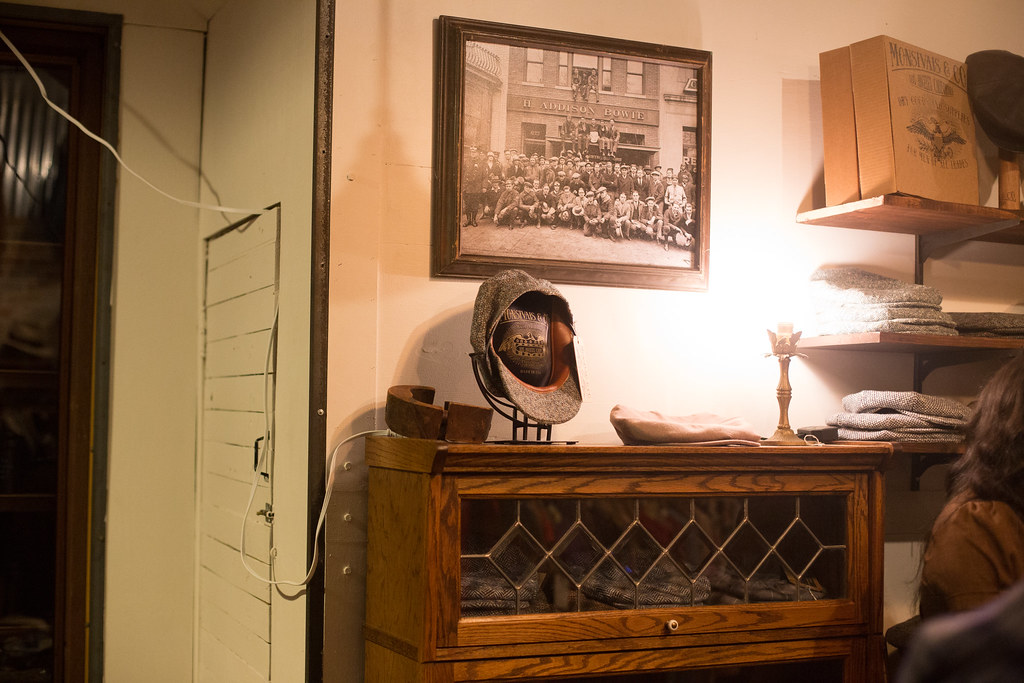 This past weekend, Spencer and I attended the Monsivais & Co Grand Opening party at their newly opened showroom in Highland Park.  It was a great event, with some great style worn by the attendees.

We’ve talked about Monsivais & Co. (run by Damian and his girlfriend Sarah) multiple times, but after Spencer’s article on the 1910’s Novelty Tie I felt like we needed to talk more about it.  After all, he’s one of the best reproduction guys out there, with a special attention to detail.

I met Damian about four years ago at a vintage event put on by Benny Reese.  Since I was just starting out, I tried to make as much friends as I could, in order to learn more about vintage clothing and style.  Damian was one of those guys and based on our various conversations during different meet ups, I learned a lot.  He and his girlfriend sell vintage pieces that they find, so it was natural that Spencer and I grew closer with them. 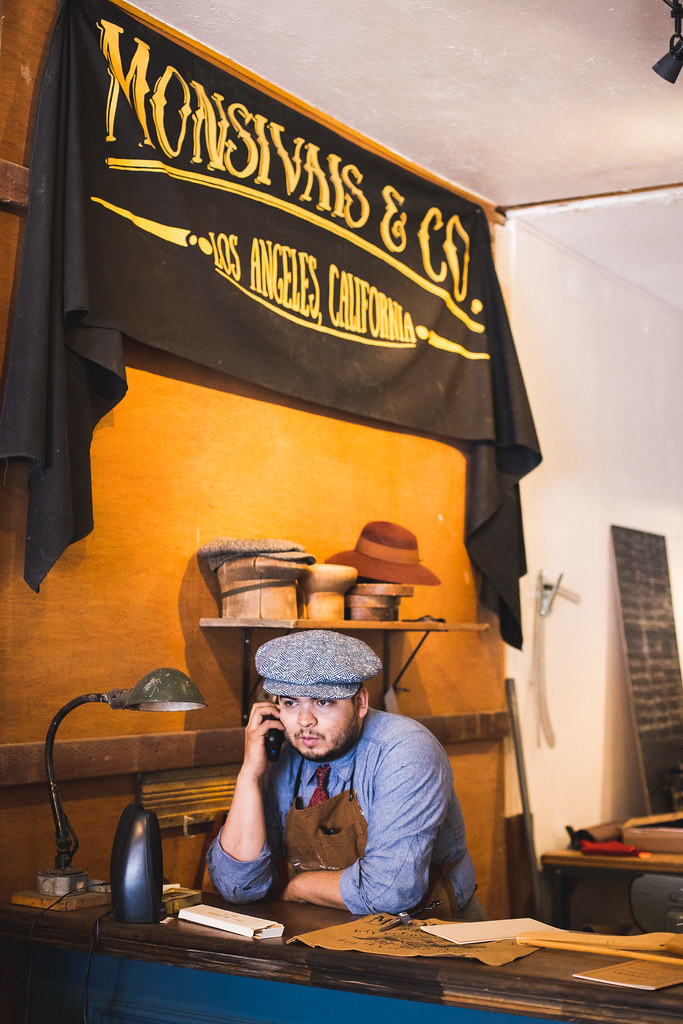 At the time, Damian was a photographer who supplemented his income by selling vintage making 1910s-1930s caps  (with the most intense detailing I’ve ever seen) online. Over time, the cap business really took off and it’s been extremely popular not only to the vintage community, but to the general menswear market.  It makes me proud to see him open up a physical location where you can not only browse through vintage and try on his RTW but where he can actually work on his pieces and host events! 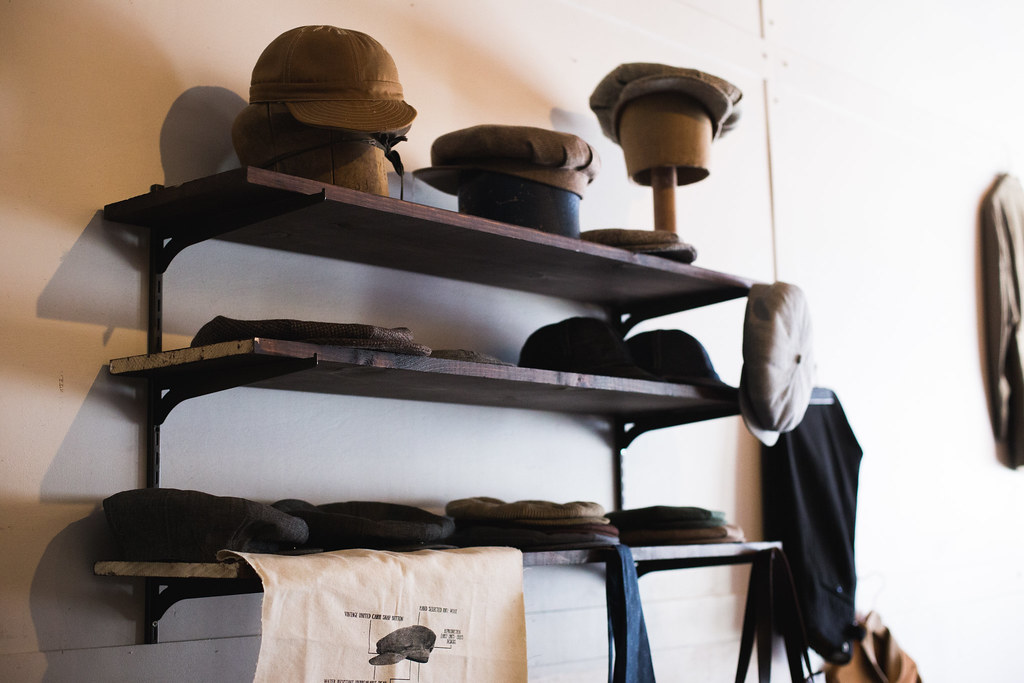 While I don’t personally own any caps (I prefer fedoras, if that), I can attest to their quality and craftsman ship.  Never have I seen any pieces made with true vintage fabric with detailing to set them apart from any newsboy cap out there. Just look his stuff.  No one makes pleated caps anymore let alone cut them from awesome fabric.  Yes, you might be able to find true vintage caps (not always in great condition), but if you’re a big headed guy like Spencer and me, Damian has your back.  He’s made stuff for everyone from vintage enthusiasts like Jan from the Armoury or for film wardrobe departments (like Live by Night!).

Damian’s showroom has been under a soft opening for a while, but it’s finally ready to be officially open!  Nestled on Figueroa in Highland Park, his store harkens back to the old tailoring days of Los Angeles.  In addition to selling his vintage finds and handmade caps, he also stocks an assortment of canvas and leather bags!  It’s definitely a place to check out. 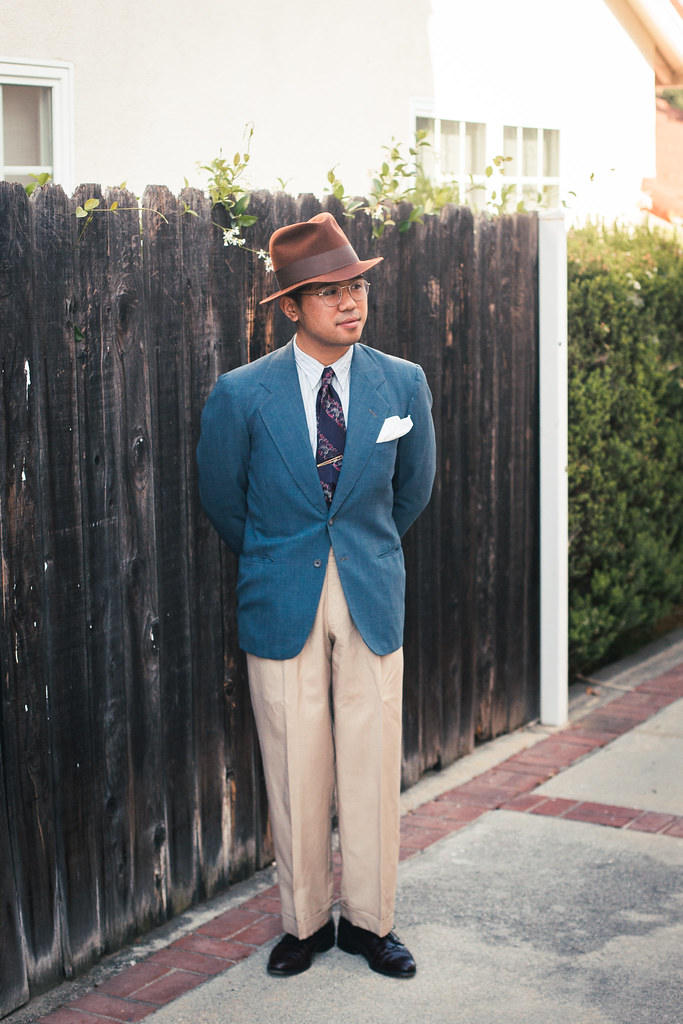 Since this party was the first of the dog days of July, I knew that I had to do some lightweight vintage tailoring.  The color palette is pretty summer appropriate, with a light blue jacket (from this Dapper Day suit) and some pleated khaki trousers (not chinos); both pieces are from the early 1940’s. It’s a fun warm weather spin on the tried-and-true navy jacket + khakis combination.  For some shade, I’m wore my custom 1930’s style fedora.

Yes, both pieces are made of wool but they’re very lightweight!   Obviously they can’t compare to the extremely softly tailored stuff from Eidos or the tailors in Naples, but they’re close enough.  I will say that vintage has no “seasonal purchases”; you gotta buy what you can when you see it, other wise you may not see them again! I think I bought these pieces in the fall/winter (way back when) and I’m always excited for a chance to wear them. 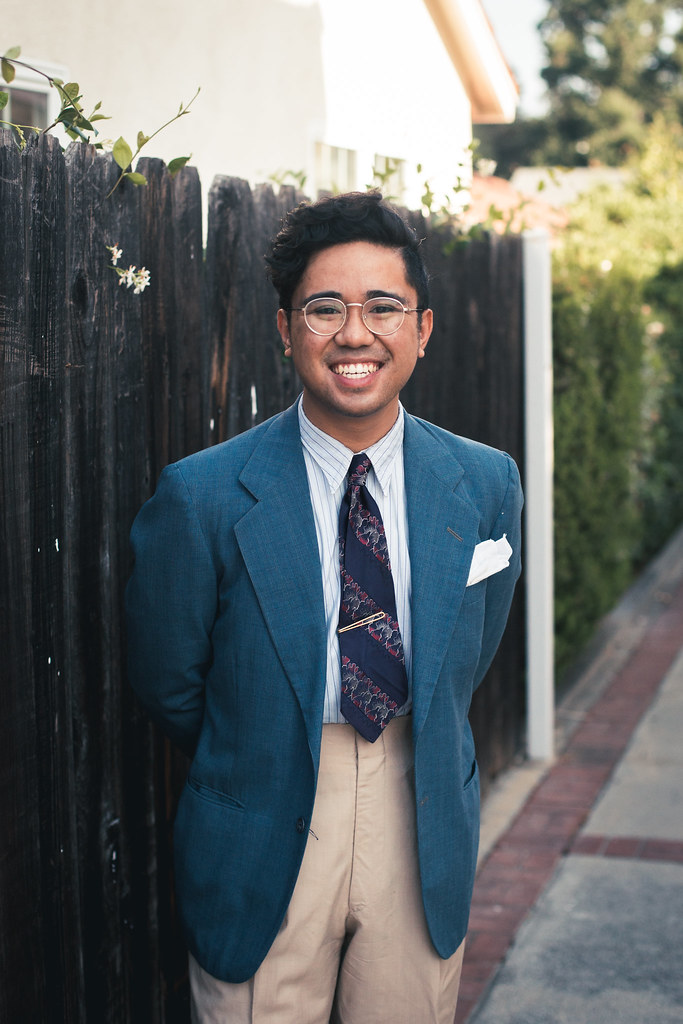 What makes these pieces early 1940’s? It’s all in the design.  While the jacket is pretty well cut with structured shoulders (that aren’t too aggressive) and a normal length, the lapels and button stance are definite precursors to the “bold look” of the late 1940s and early 1950s.  The button stance isn’t crazy, but it certainly is lower than the 1930’s, which allows the downturned lapel angle to shoulders; it’s certainly a “masculine” look. 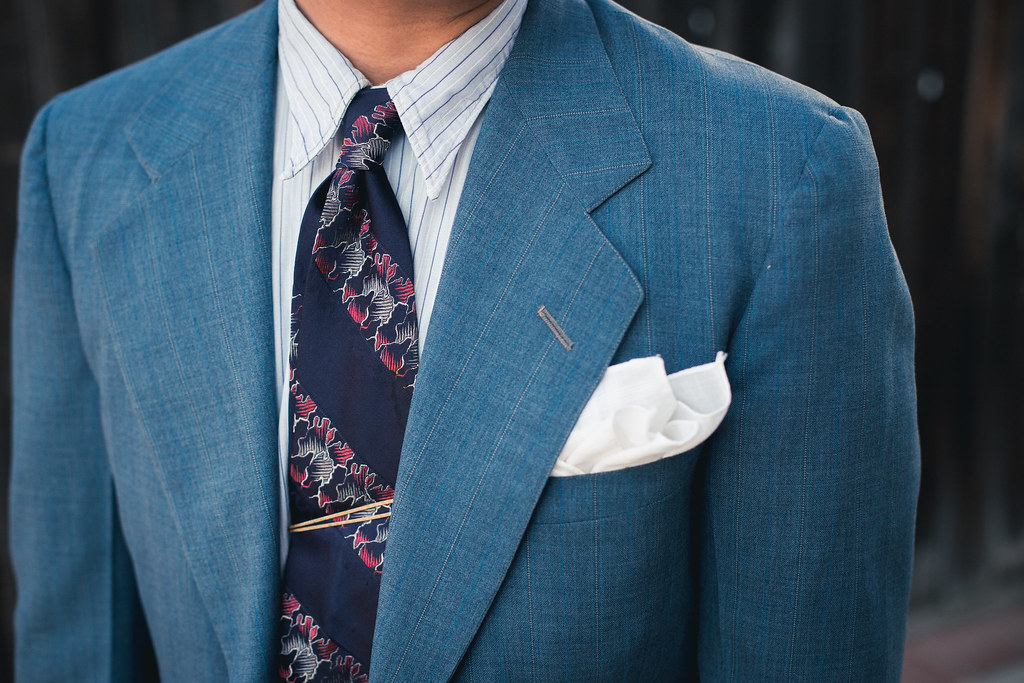 Mixing eras is what stems from personal style.  If I was doing it accurately, I would’ve worn a bold, abstract 1940’s swing tie.  However, I prefer more “artisanal yet subdued” ties of the 1930’s. This true vintage 1930’s tie was actually purchased at Damian’s shop and is one of the most beautiful pieces that I’ve ever seen.  Its similar to a block stripe tie, but the blocks are made up of some odd floral (cabbage?) design with silver and burgundy brocade silk!  This detailing (combined with untipped/rolled edges) is  why I always prefer vintage ties; no one makes ties like this anymore.

The tie is worn with a striped 1930’s european popover shirt that I got that the Old Spitalfield Market during my London Trip and a true vintage 1940’s tie clip.

The party was a lot of fun, filled with the more “artist” centered players of the Southern California vintage scene.  Vintage jazz permeated through the shop, where attendees drank beer, lemonade, and water while eating sandwiches and ice cream.  I tried to document some of the great streetstyle that was present, but there was just too much! Plus I took the opportunity to actually talk with some of these gents; they’re great dudes. 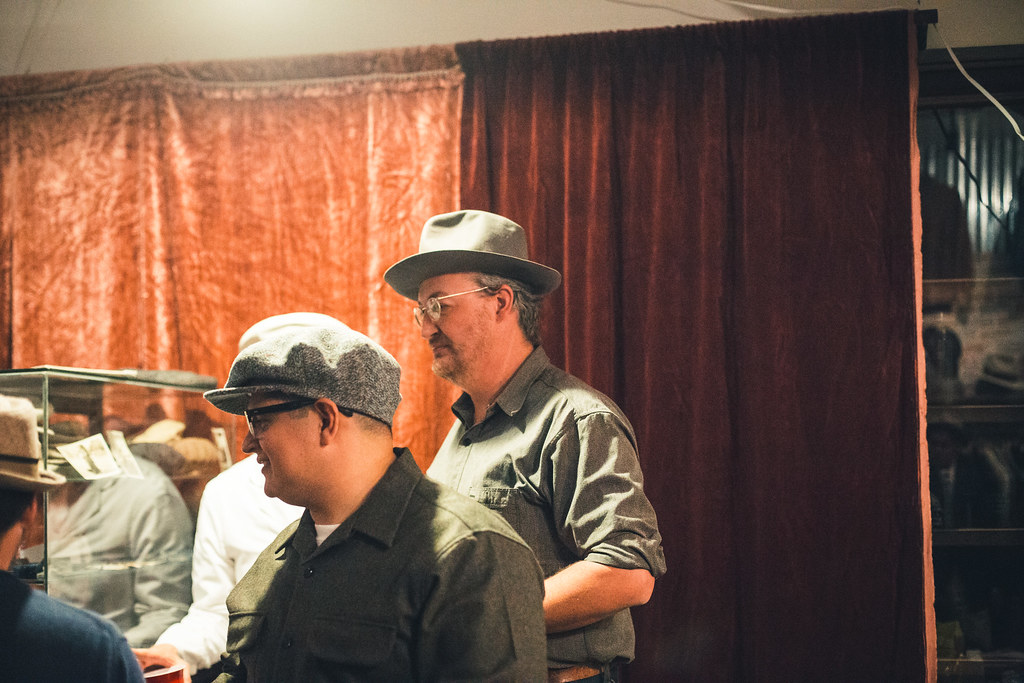 Rob from Joyride Vintage in a workshirt and casual fedora. 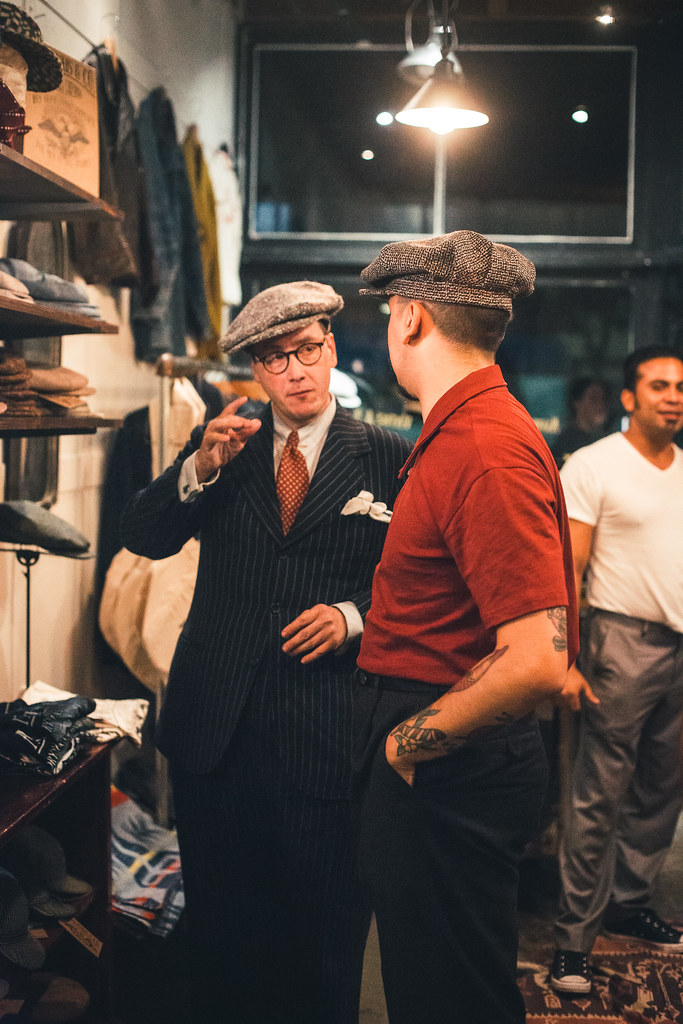 My pal Adam Valdez in a red SJC polo talking with Matt Deckard, the former creative director of Stetson Hats. I’ve gotta say that Mr. Deckard has quite an “Ethan outfit” thanks to his pattern mixing.  He’s got a pinstripe suit with a striped shirt and red foulard tie.  I’ve done almost the same thing and so has Buzz! 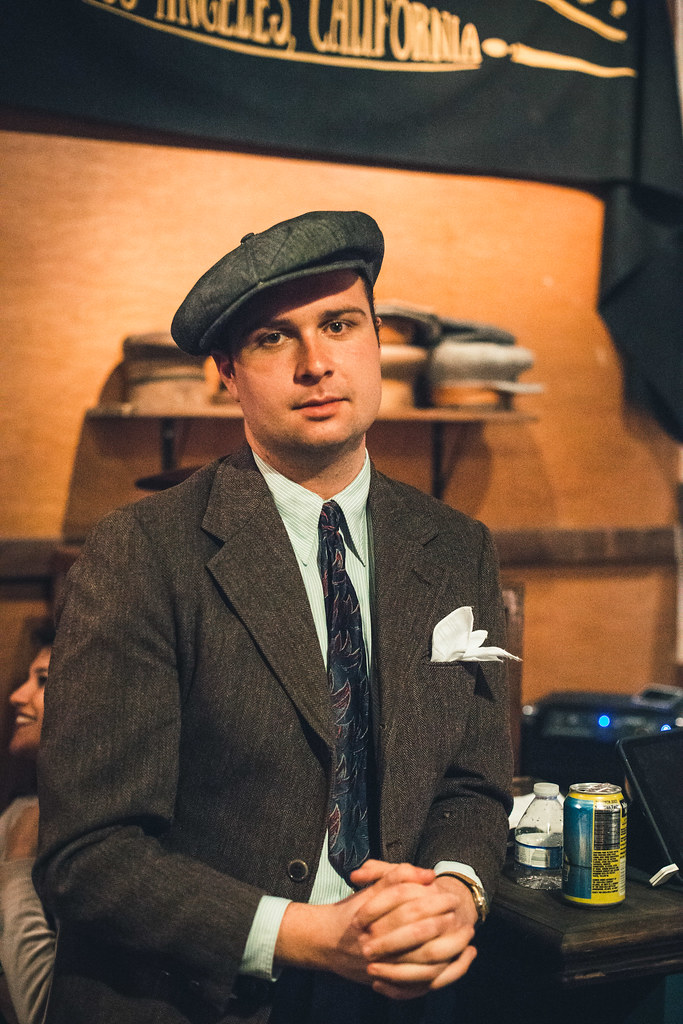 Spencer was obviously in attendance (he drove me) and also mixed eras.  He wears a brown 1970’s belt back jacket with a green striped spearpoint and 1930’s  blue/burgundy brocade tie.  Earth tones will always be a theme on his blog just because of how easy they are to match!  He also decides to show Damian his support by wearing his latest commission: a custom chambray newsboy cap that is extremely light, making it perfect for summer. 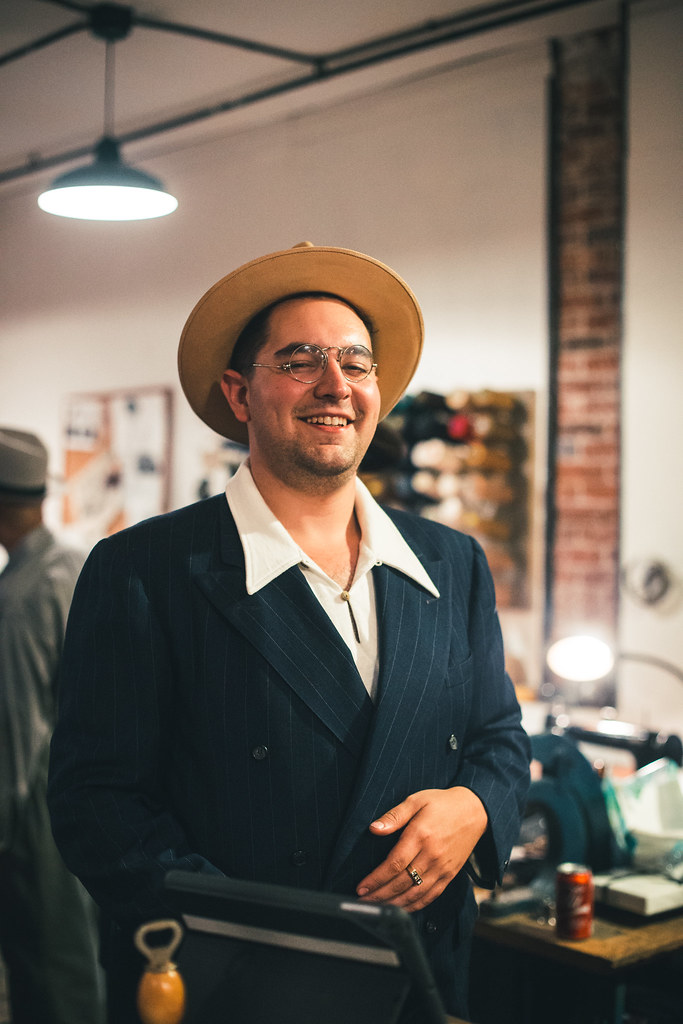 This has to be the first time I’ve seen Dylan A. in a long-go time!  As a historian and archivist for museums and private collectors, he’s a pretty busy man.  Now, most guys out there are very opposed to making a pinstripe suit “informal” but I say who cares! Dylan certainly agreed with me, and wore his SJC polo with a double breasted pinstripe suit.  He adds an extra touch of summer with a straw fedora (not a panama hat).  Might have to steal this look sometime! 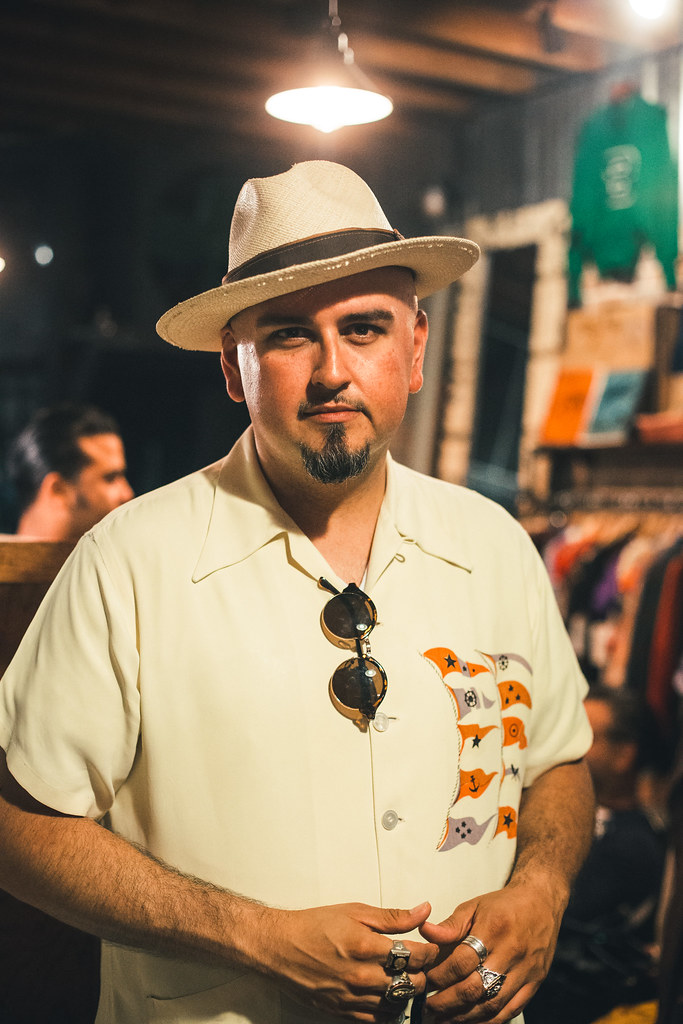 I don’t think I’ve seen J.C (The Barrio Dandy) since he opened his own showroom in Boyle Heights! An artist and designer first and vintage collector second, it’s always a delight to talk to this man.  He’s passionate about latinx and pachuco culture and he isn’t going to let people forget its roots in menswear anytime soon! I learned that he’s producing a film and creating a zoot suit out of vintage newspapers for a performance piece soon!

J.C was in full vintage casualwear, so if you need inspiration on how to dress down, here it is.  His rayon sport shirt/jacket is a beauty simply due to the awesome print and the fact that there are patch pockets on it; you can barely make out the pocket at the bottom of the picture above.  He tops it all off with a Panama hat.

Note his cool rings, which he designed and made himself. 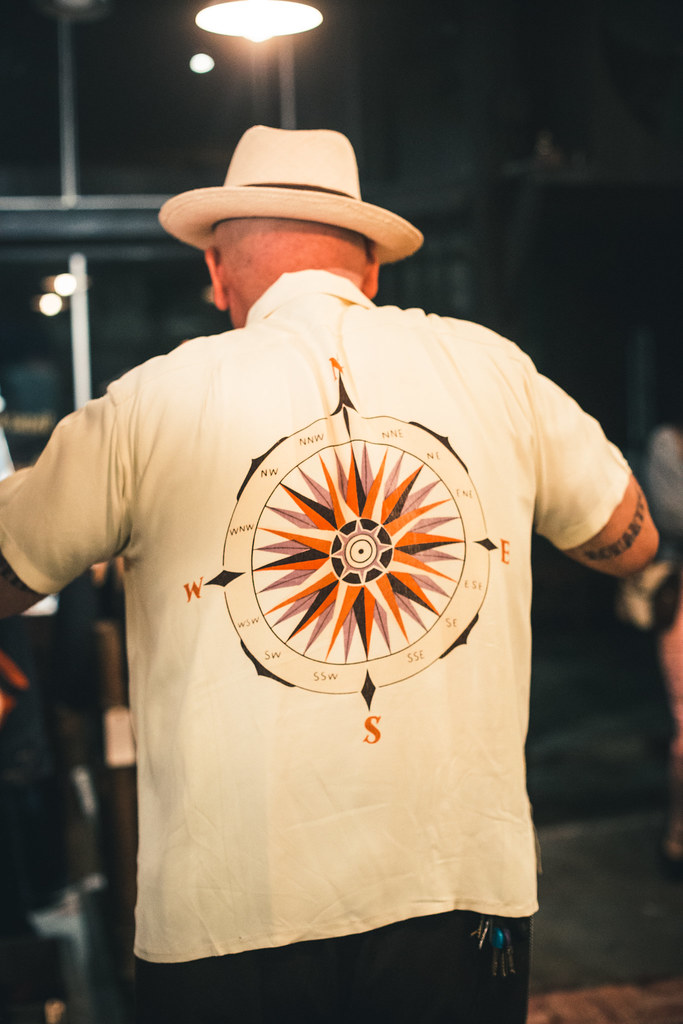 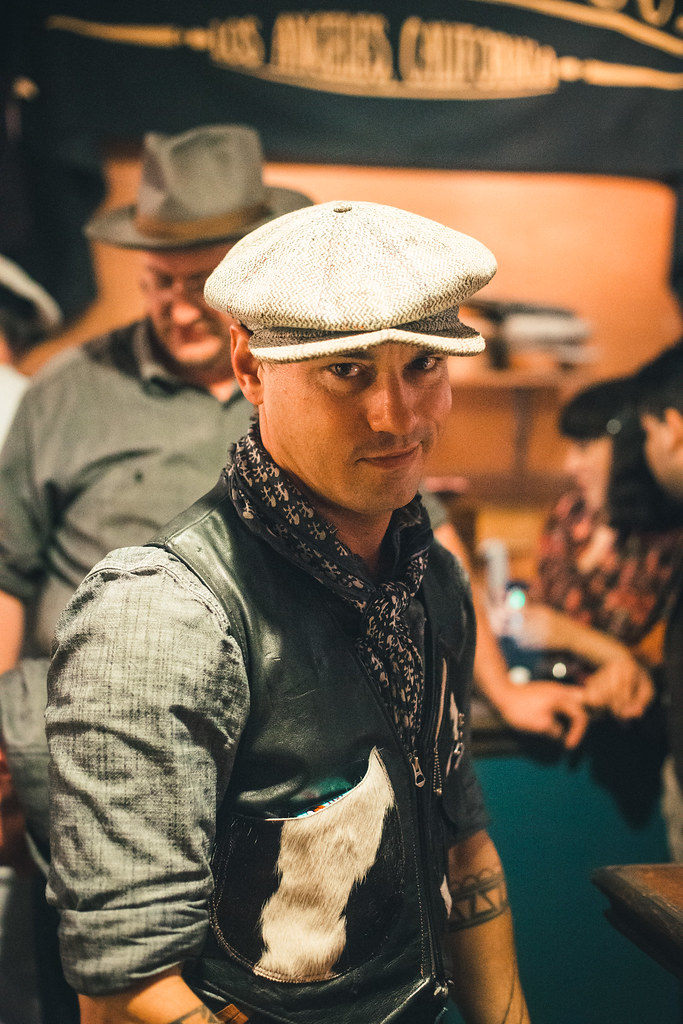 Eli the ladykiller was there in an epic western/workwear outfit.  Chambray is a great choice, but the real boldness comes with his leather vest; he told me that he added the cowfur pockets himself! I can definitely see him on the cover on Clutch Magazine’s next issue. 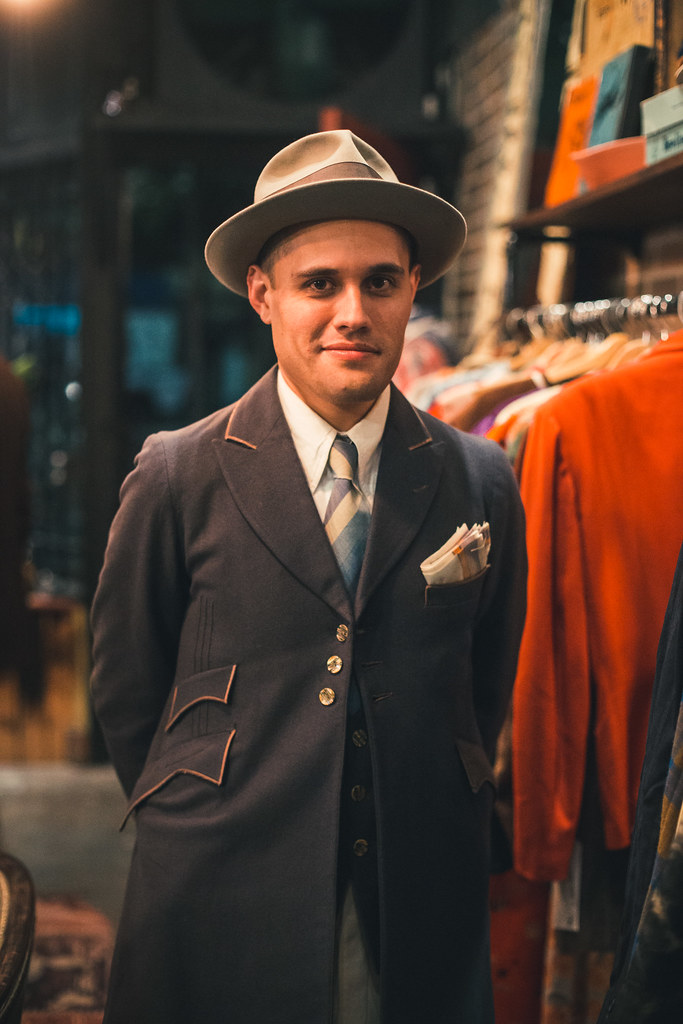 Dylan R. takes the cake as the person with the most rare piece in the room.  His suit (rather jacket and waistcoat) is an early 1920’s piece called a “jazz suit”.   Popular with youths back in the day, these suits were insane thanks to their weird tuxedo like detailing and odd button stance. I’ve never seen one in person before, so seeing Dylan roll up in one was jawdropping.  It’s like a mix between a white tie jacket, an overcoat, and a suit!   Look at the low waistcoat in the above image; that’s so weird!

Sometimes you can just appreciate vintage for the rarity, craftsmanship, and attention to detail that no one does anymore.  With that said, I’d probably never wear one of these, even if I could get it bespoke. 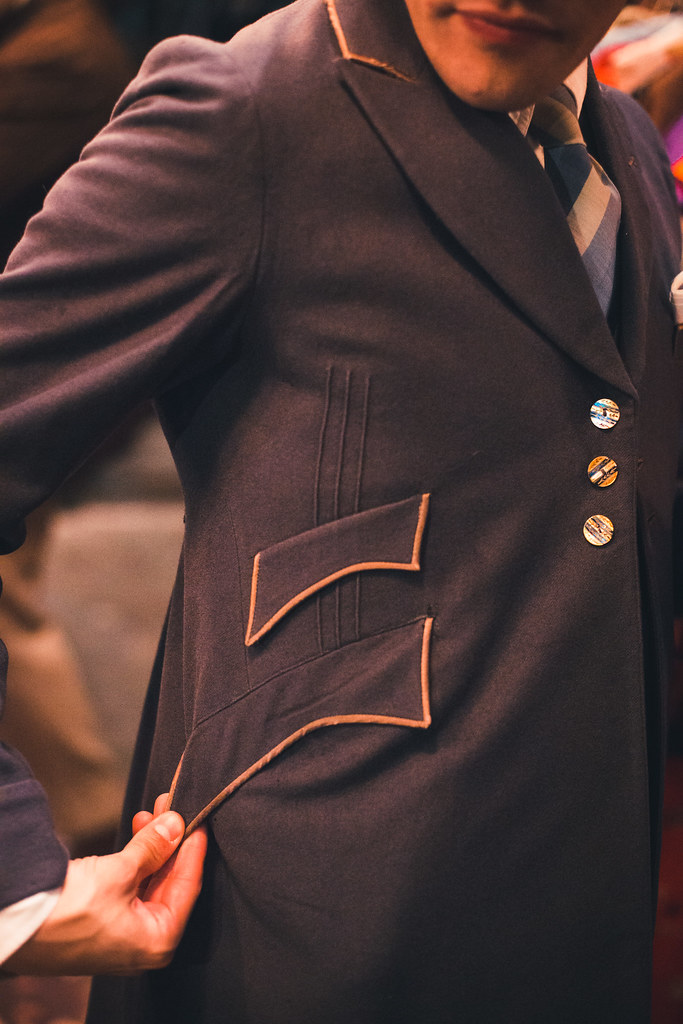 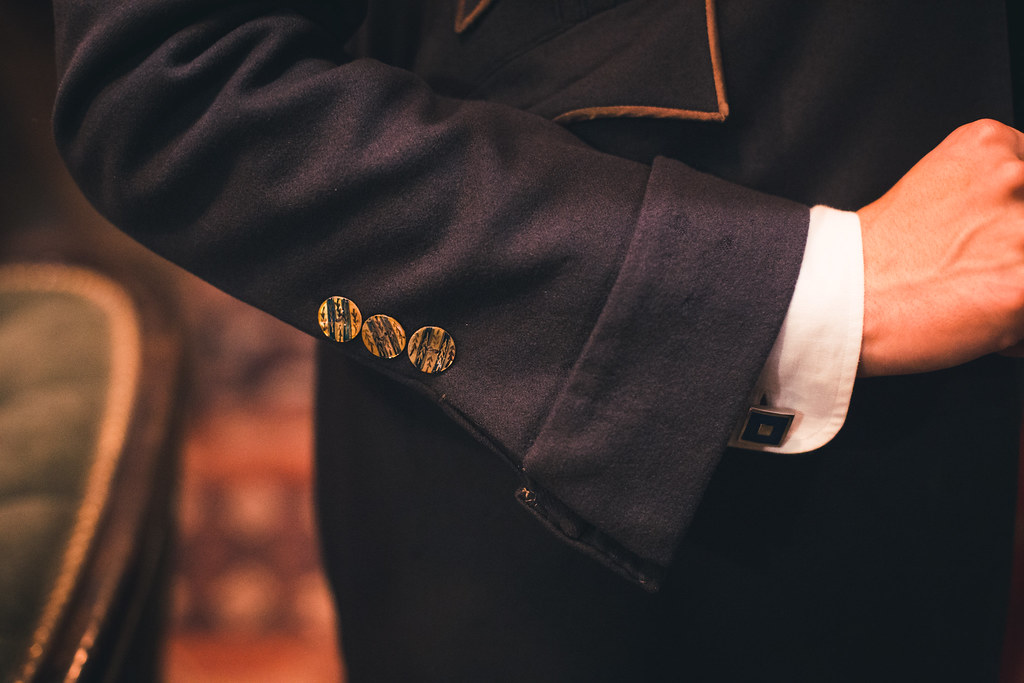 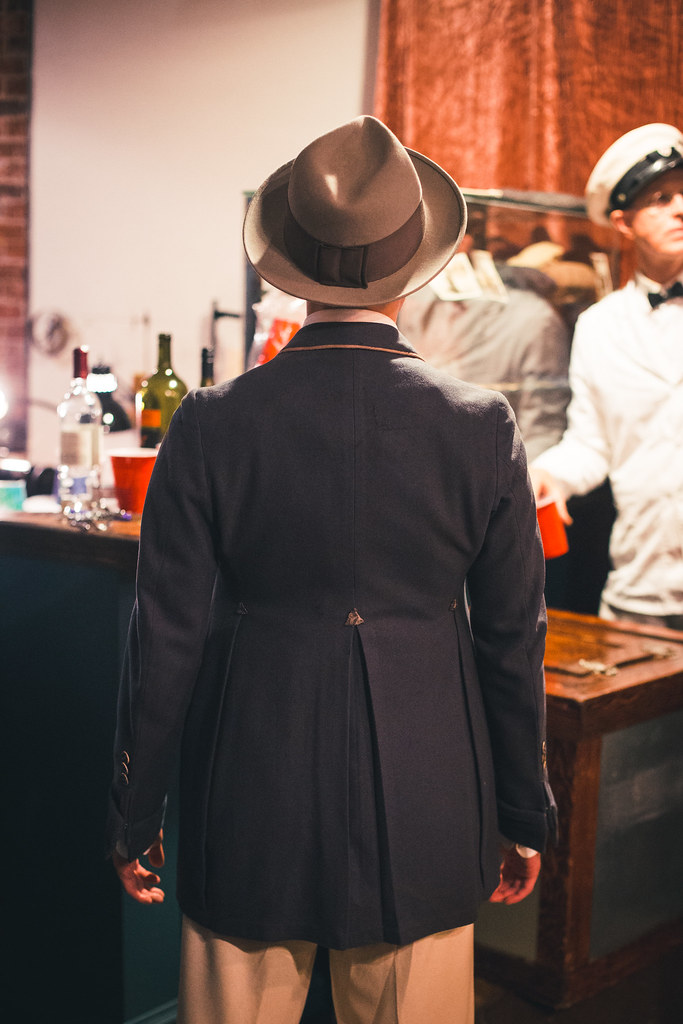 Triple pleated “psuedo-vents”, named because the jacket doesn’t have any true openings in the back.  God damn. 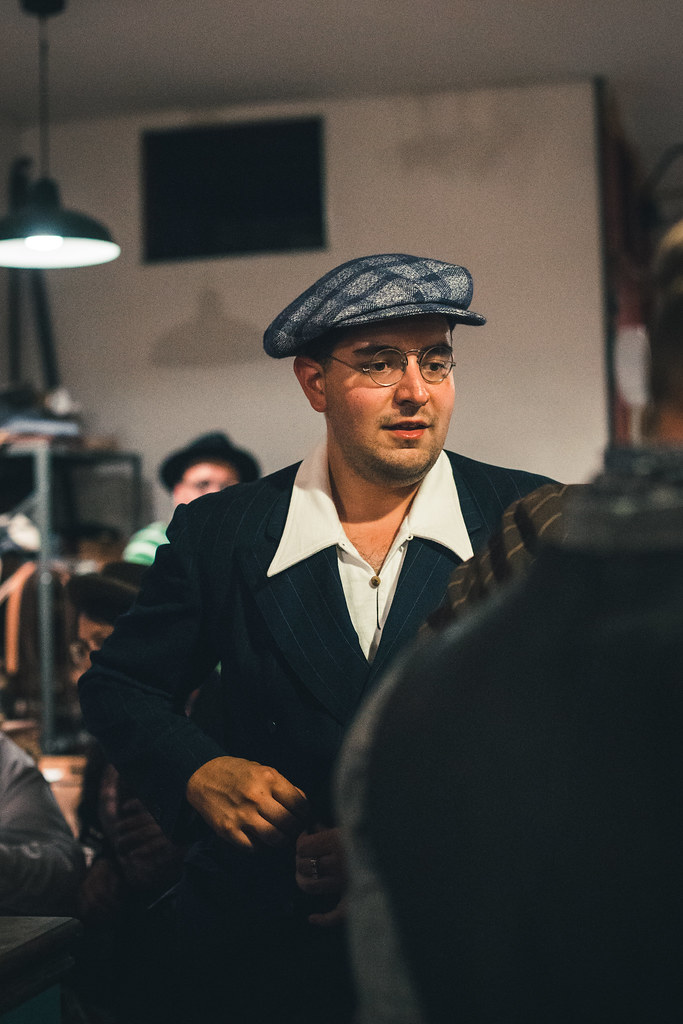 Dylan A. trying on a checked Monsivais summer cap. 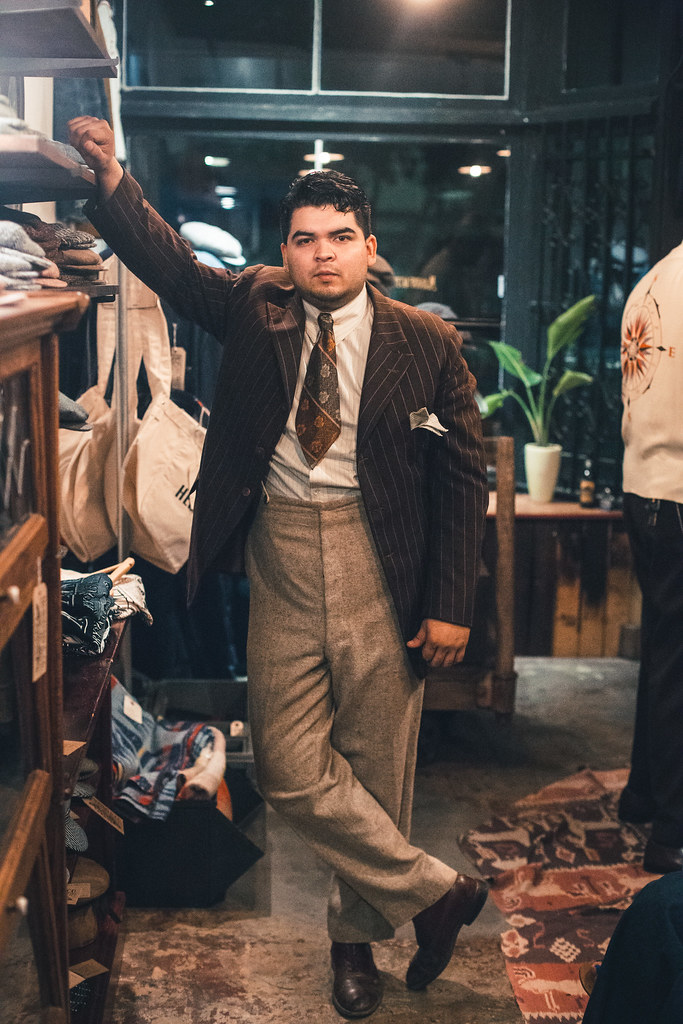 We finish this article off with Damian Monsivais himself channeling the 1920’s in less dandy way.  People ask if you can wear pinstripes separately and here’s a fantastic example that isn’t super Pitti Uomo (basically, you gotta wear white pants).  In a more rustic direction, he pairs his brown pinstripe jacket with beige textured summer wool trousers, which have the cool detail of having the suspender buttons on the outside.

Everything Damian is wearing is from the 1920s, each with dates stamped on the interior.  Note that his trousers are high rise but lack any pleats; the leg opening is also quite narrow compared to the 1930’s and 1940’s.   This “stovepipe” trouser cut was characteristic of the 1910s-1920s. 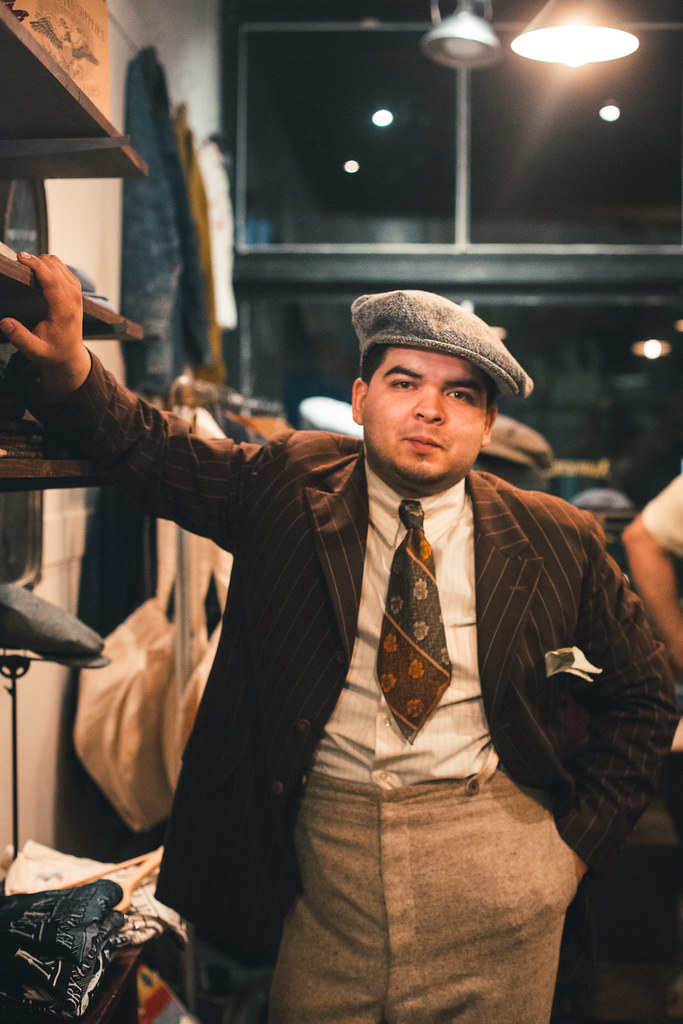 In the end, Damian decided that donning one of his caps was most appropriate for his portrait!

Overall, I can’t say enough of how proud I am of Damian.  Hustling his ass off to open a physical store is literally the American dream and a huge accomplishment considering the online/mobile direction that menswear has taken.  I think it just goes to show you that vintage will always be an in-person experience.  At least now he doesn’t have to make caps at home!

The party was fantastic, as most vintage parties are, but I think was a lot better considering the people in attendance.  Sure, we can talk about menswear, but it’s not everyday that you get cool cats like a Los Angeles professor of ancient history or a Japanese apprentice hat maker in one room (both of which I didn’t get to photograph, unfortunately)!  The vintage scene is super cool and I implore any of you who are interested so simply reach out! I could use some more youngin’s to hang with.

You can follow Damian on Instagram and Facebook! The store address and hours are on those pages so you can check out the vintage for sale or get a hat made from his multitiude of models. Whether you’ve got a workwear style, a vintage sartorial style, or anything contemporary, he’s got something for you. I can’t wait to see how his store develops and grows!