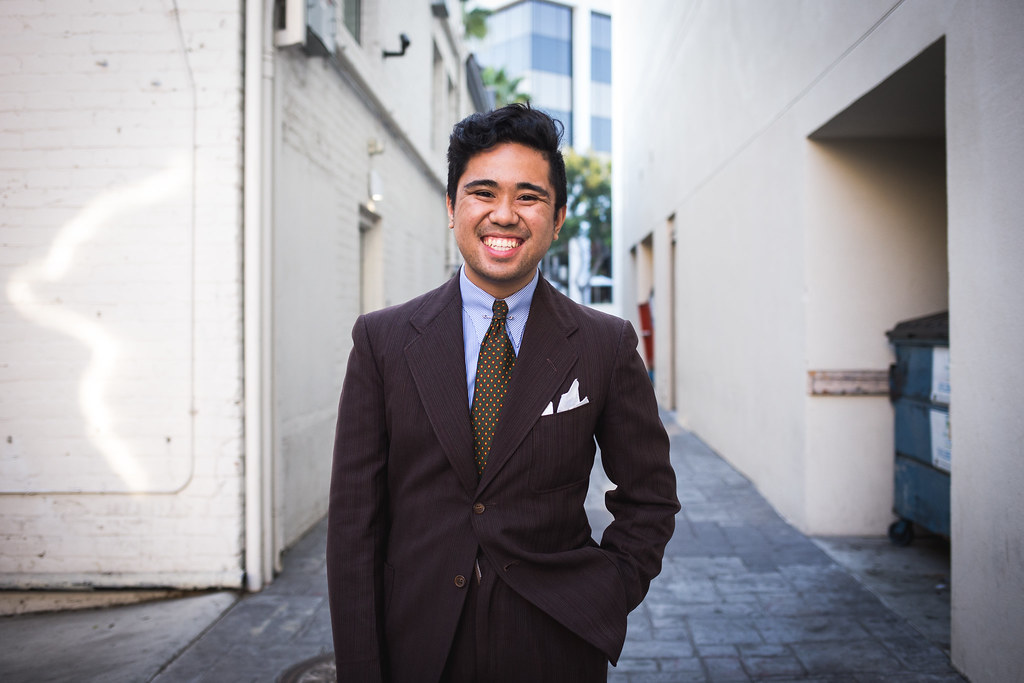 Time to start a new feature on this blog: Ethan’s grails.  The star of this inaugural piece is a fantastic suit with the cut and designs I’ve been obsessed with ever since I got into vintage menswear.  I may just have to get it replicated (with updated fit details).

I’m going to admit that I haven’t bought a “new” suit in a while.  Recent ones from memory is the unstructured 1960’s suit and the Camoshita suit come to mind.   It might seem like I have a new suit every week but I tend to dress seasonally; my fall/winter suits and sportcoats are languishing in my closet just waiting for the temperature to drop.   In general, my wardrobe is already pretty packed and it really doesn’t need more pieces so I’ve decided to only buy things that I truly need (not just for the sake of thrifting) or if they have details that call out to me.  I think I have a suit for any occasion now, so I can really put in effort (and money) to buying my grail suits.

If you guys follow me on instagram or you’re a vintage person, you’ll know that I’ve gone to Roxy’s Vintage Deluxe.  We talked about this place during the unstructured 1960’s suit article.    I’ve been at this store (which is actually a wardrobe warehouse) about four times now and have seen almost everything she has to offer.  As someone who supplies pieces for productions, she has crazy rare stuff from the 1900s-1990s which includes both sartorial and casual garments.  Hell, most of my vintage sportshirts have come from her.

Anyway, since I’ve been there frequently, there has been this one suit that has always called out to me.  Priced at $350, this brown 1930’s/40’s suit little rich for my blood and it wasnt’ really necessary.  You guys know that I only wear Golden Era, true vintage suits pretty sparingly (Dapper Day and Vintage parties, basically) so the suit would seldom be worn.  Plus, you’ll know that I have plenty of brown 1930s suits like this one and this one .  But this one was different.

I eventually saved enough money, got the price down to $300 (thanks Lulu!) and wore it immediately.  Obviously some adjustments have to be made, but I couldn’t resist. 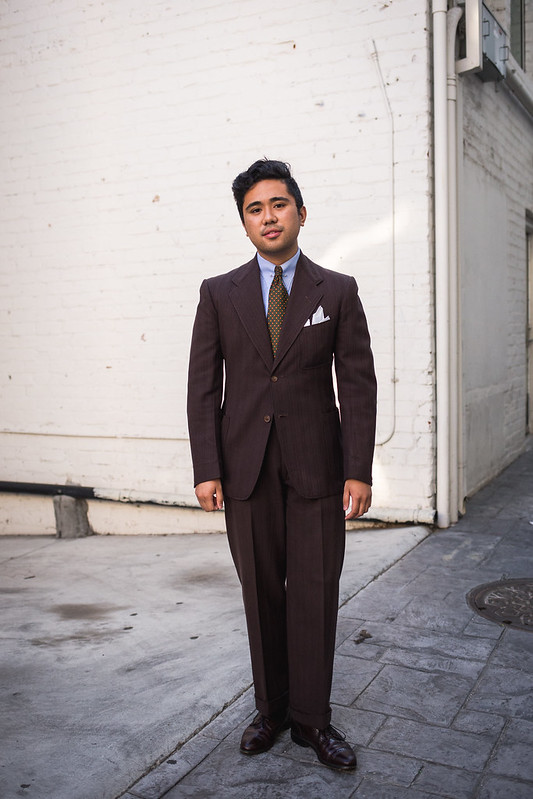 Okay, this is the shade of brown that I’ve been fuckin’ waiting for.  It’s incredibly dark, which makes it easy to match with and even provides amore conservative (read, elegant) vibe. As you can see the suit is nearly perfect, but it needs some work. The sleeves are a tad long and the pants (which you can’t see in this shot) need some lengthening.  Overall the suit is a great defining garment for the late 30’s/early 40’s thanks to it’s wide notch lapel, flat front trousers, and padded shoulders.

If you look at it straight on, it doesn’t look too vintage right? It’s probably close to an English or Milanese cut thanks to it’s “masculine” design! 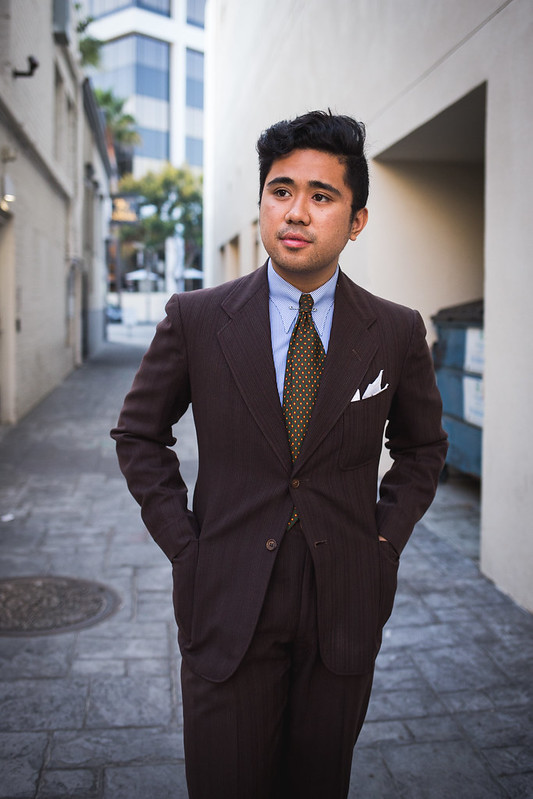 The suit is made of slightly heavy wool that has some slight texture (super worsted weren’t made until like the 50s?) and a nice drape. Its definitely not as scratchy as the suit from the Christmas party.  You’ll also notice that it’s a dark brown (but not not a true chocolate brown) that features some crazy striping: quadruple tan stripes with double red stripes.  I recall StyleForum regular UrbanComposition say that he doesn’t like old suits due to the vintage predilection for uber-striped fabrics; I’m honestly not a fan either (I prefer plain or simple chalkstripes/windowpanes) but it adds some character to the suit! It’s safe to say that fabrics like this aren’t really seen much anymore, even at Pitti Uomo.

I decided to style an outfit that is pretty reflective of my everyday style: striped shirts, foulard tie, and white pocket square.  You’ll note that while it definitely exudes 1930s/40s style, it’s not dissimilar to styling today.  I’m not a huge fan of super bold ties and I think styling your vintage pieces in this way is one of the best ways to lessen the “costume effect”. 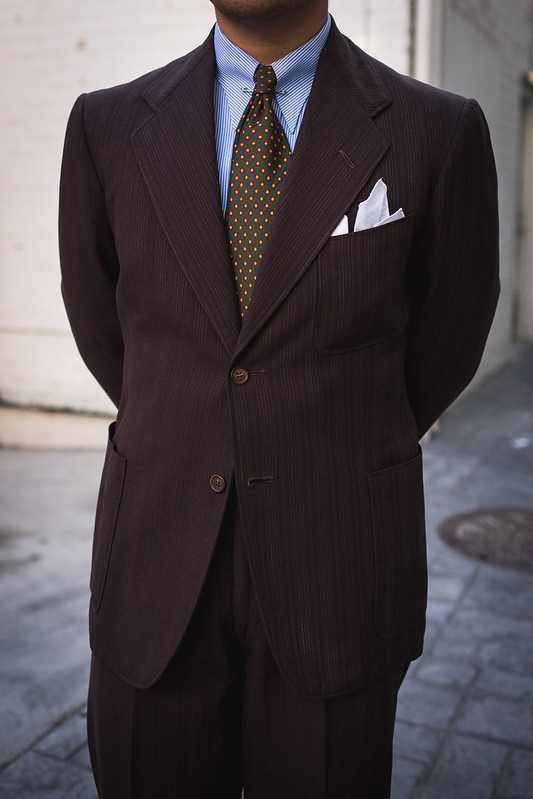 The jacket was the main reason why I consider this a “grail suit” and why I just had to buy it.  Firstly, the lapels are absolutely perfect and are basically the real life version of the ones I’ve seen illustrated in advertisements. I measured them to be a five inches in length which seems crazy but it is offset by the fact that the notch is has a wide opening that’s close the pocket.  Compare this lapel to modern ones (which take after the 1970’s) where notches are cut higher and near the shoulder, which only emphasizes the lapel width further.  I am in love with the lapels on my suit, especially with the blunted/rounded edges.  I think this emphasizes the chest in a much more elegant and subtle way!

Next you’ll note that the jacket has large patch pockets. This is a detail that most suits don’t have today.  The pockets are also much more square looking (with rounded edges) as opposed to the more overtly rounded contemporary ones. overtly rounded contemporary ones.   Also note that the patch pockets don’t have a lot of “give”; they are still formed by new fabric over the jacket body, but they’re cut quite close, which makes it a little hard to stick my hands in.  I’m guessing this is to prevent the pockets from sagging in the future or to detract from the waist supression of the jacket.  I will say that it makes the chest look much more streamlined, especially in regards to the breast pocket.  The lack of “give” allows it to stay smooth even with a pocket square. Compare that to modern ones which definitely start to puff out.

I think that we can agree that overall, the jacket is cut and designed fairly classically. You could probably wear this with some slightly tapered trousers (that are still full cut) if you wanted to.  It’s not low buttoning like the 1950’s or boxy like the 1960’s.  God damn, I love this jacket.

I would definitely use this jacket as the template for a bespoke commission, whenever that day comes.  I’ll probably preserve everything except the padded shoulders; I want this jacket to be comfy and slouchy! 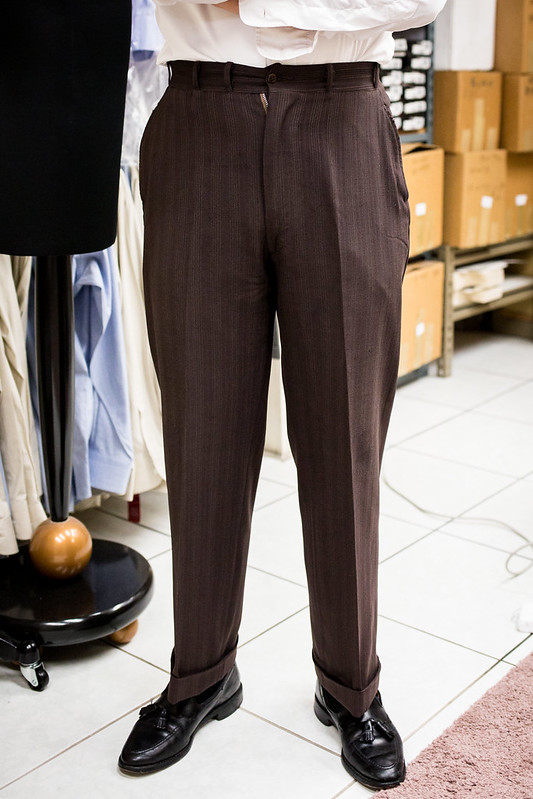 The trousers are where it needs the most work. Right away you’ll notice that the waist seems tight (it’s not that bad, I think) which prevents the zipper from staying up.  It lacks the interior latch , which is supposed to keep the fly from opening.  You’ll see what I mean later.

The shape of the pants is quite nice. Very full cut with not that high of a rise (30s/40s pants weren’t that high, but I still prefer mine higher) that come down to a nice cuff. 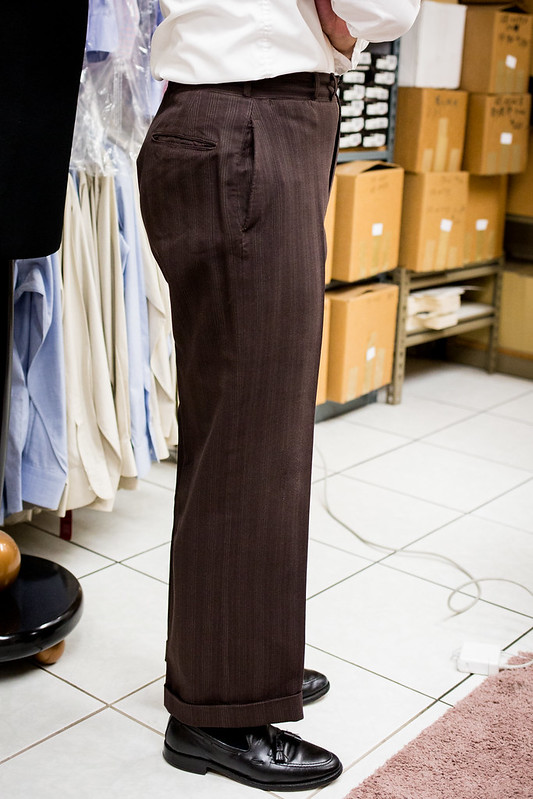 Ah, there it is. These trousers definitely need to be lengthened so that they fall right on top of the shoe without breaking.  As of right now, they are hovering slightly above the ankle bone, so I’m going to have to let them down by 1.5-2 inchs.  We’ll see! 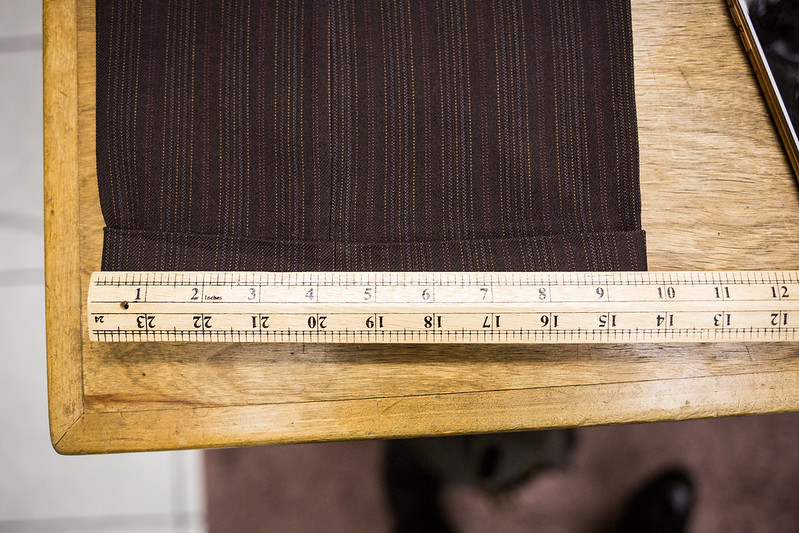 True to the vintage spirit (I mean, they are almost 90 years old), these pants have wide legs.  You can see from the picture that they are nearly ten inches in diameter which is insane.  They honestly don’t look too bad when you wear them normally (without breaks), but if we were being picky, I’d prefer an 8″ leg. That’s the diameter that I typically get my pants tapered or let out to.  However, I’m not going to change these trousers.   I never taper trousers from the 1920s-1940s because I want to preserve the original silhouette! I know that means that I probably won’t wear this suit outside of vintage, but that’s why I have a giant wardrobe! 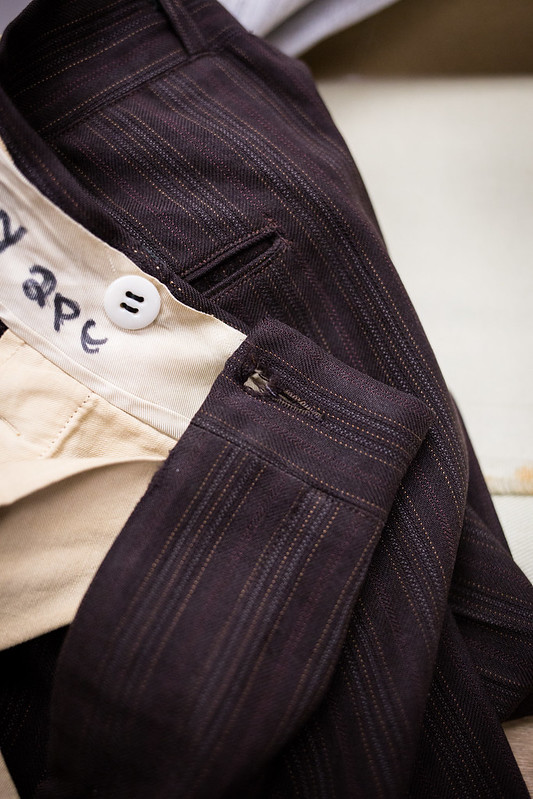 Here’s the other offender of the waist issue. The button hole has become extremely frayed, so it doesn’t even hold the button well.  The button ends up getting pushed to the side, which contributes to the zipper’s inability to stay together.  I’m definitely going to ask my tailor to redo the buttonhole and perhaps include fabricate a quick latch to prevent my trousers from becoming undone!

EDIT:  After talking to my tailor, he said that the zipper is weak and needs a replacement.  I’m considering finding a cheap vintage Talon zipper to use. That way it keeps the vintage details! 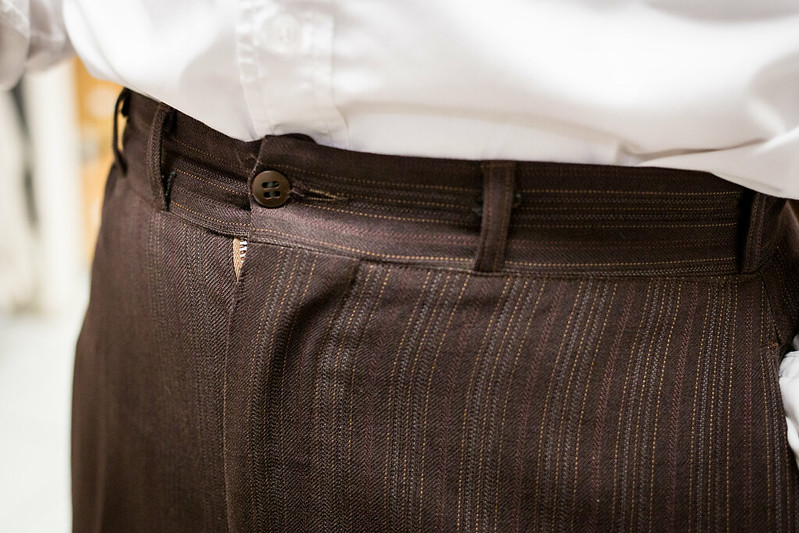 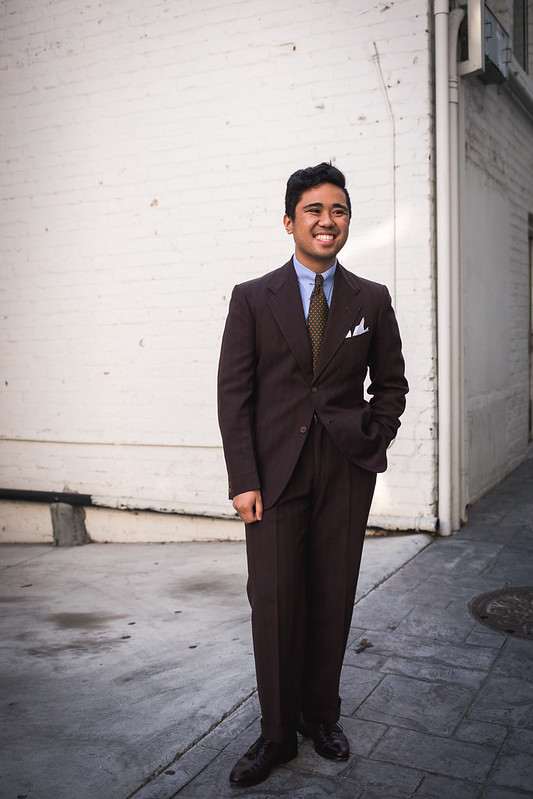 I am literally obsessed with brown suits just because of how well they go with everything; you’ve probably seen me rock multiple combinations before like this and this.  But the most important thing was that it had the perfect lapels I love and had some awesome pockets.  Like I said earlier, I will most likely use this suit as a template for a bespoke commission.

Even apart from that, the suit was great despite the small alterations that need to be done. The cut is fairly classic (especially in regards to the jacket) which goes against a lot of the times when people say that vintage clothing has no place in today’s world.  Hell I’d go as far to say that sometimes modern tailoring can be even bolder than vintage.  I’m personally a fan of wide lapels, slim waist, and full cut trousers.  Though I could definitely lose the shoulder pads and taper the leg opening.

I can’t emphasize how lovely the color is.  Menswear from the 1920s-1940’s was rich in colors as well as patterns.  Deep browns with purplish undertones is just a fraction of the awesome fabrics that were common back in the day.  Most people forget that, since most of our reference materials (photographs and films) are in black and white; luckily we have illustrations by Laurence Fellows to allow us to see the amazing menswear offerings.   It’s just a huge a shame that it’s so difficult to find fabrics like this apart from bespoke or MTM.

I’m honestly trying to buy less suits moving forward, simply because I have too much.  True vintage (1930s-1940s) pieces are harder to wear today, due to their shoulder pads, heavier weight fabrics, and wide legs.  If you’ve heard me talk on my instagram live streams or if you’ve paid attention to this blog, I only wear true vintage suits to Dapper Day and vintage events.  If it’s a regular day, I’ll stick with my 1960s-to-contemporary pieces since they are slightly tapered and feature a softer shoulder and chest.  It’s those reasons why I wan’t to hold off on buying true vintage since I already have a lot!

Plus, if I actually stop buying true vintage and doing thrifting-tailoring projects, I could potentially have enough to get a bespoke suit made!  And thanks to my giant closet, I have enough pieces to give the tailor as a sample garment.  The suit from this article is definitely a contender to be copied.  I’d just lose the shoulder pads and I should be good to go.