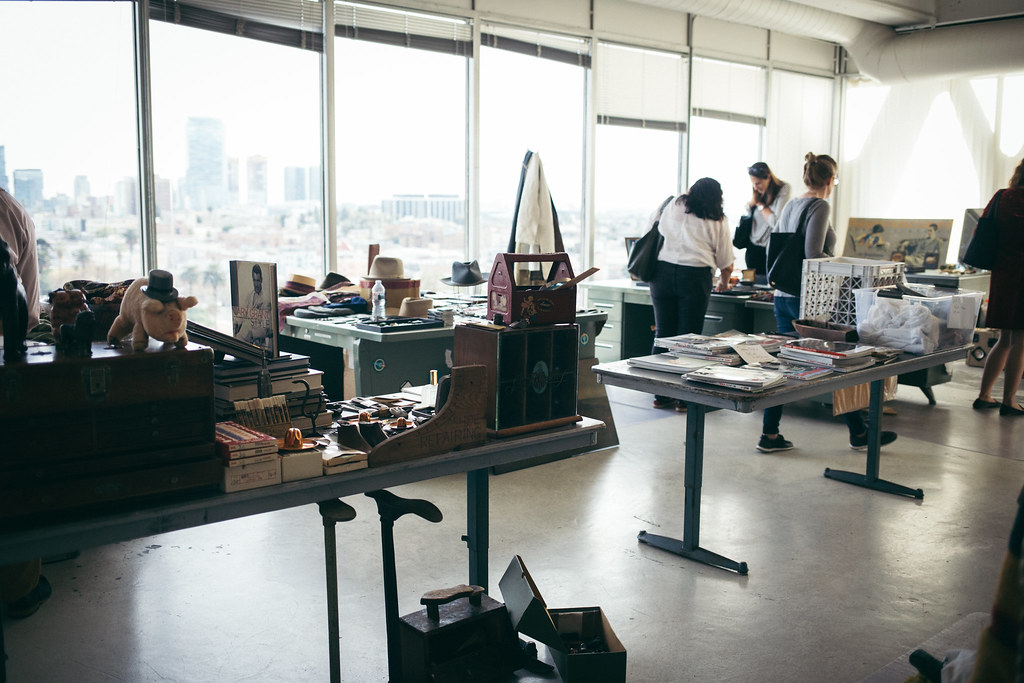 You know that I complain a lot about the lack of LA menswear events, but luckily Jesse Thorn had us covered.  Spencer and I briefly attended the Put This On Holiday Market!

I’m going to admit that I don’t really look at a lot of menswear blogs.  Sure, I may frequent Male Fashion Advice (which is probably the only forum I’m active on) and have been known to reference Die, Workwear (when the content applies to me), but I am seldom venture anywhere else.   I used to check out Articles of Style for content, but stopped once they started focusing on e-commerce and basically abandoned their editorial content.  I’m not a fan of Art of Manliness, Dappered/Primer, and the other youtube-focused blogs and I seem to have mised out on the height of Fashion Bean and Four Points.   The point is that I don’t really keep up with other blogs.  Except Put This On.

Put This On is probably one of the few places that actually echo the ethos of my own blog and style. Yes they like classic menswear.  Yes they love the armoury.   Yes they appreciate vintage. And yes they also like casual stuff like Minimalism and Japanese-Americana Workwear.   I enjoy PTO immensely for these reasons.

Jesse Thorn, the PTO Founder (and now podcast network owner and NPR programmer), is also a huge thrifter/eBayer and an affordable, practical approach to style is something that resonates entirely though the blog.  PTO has apparently come a long way since Jesse started it and now has multiple contributors; Ryan Smith, my illustrator friend, does fashion drawings for them and has featured me a few times! I honestly don’t know too much about PTO, as I only started going there in the past two years at the recommendation of users on Male Fashion Advice.  I’m not kidding when I say that I’m pretty isolated from other blogs.

Anyway, as Jesse and PTO has a fascination with vintage and thrifting, they have incorporated a cool store where they sell some of the cool things that they’ve found.  This comes in addition to their weekly postings of fantastic eBay listings that I may or may not have gotten a few pieces from.  The PTO online store is filled with a great menswear, ranging from sweaters and pins to their own pockets squares and ballcaps.  I will admit that I haven’t bought anything from them, until this past weekend.

While I was perusing through Put This On during one of my breaks at work, I saw that they were having a holiday market! Ryan later told me about it, saying that there was going to be some cool stuff, great prices, and a chance to meet Jesse!  I had previously on Articles of Style years ago before I was aware of his status as a podcaster and a prolific blogger; I simply saw him as a dude who had really great taste and a knew how to get a classic wardrobe on a budget.  Now, I had gained enough knowledge on Jesse (especially thanks to his feature on  Blamo!) that I definitely wanted to meet him! I asked Spencer (who is a huge Maximum Fun fan and a loves journalism) if he wanted to go, and we made the trip to LA. 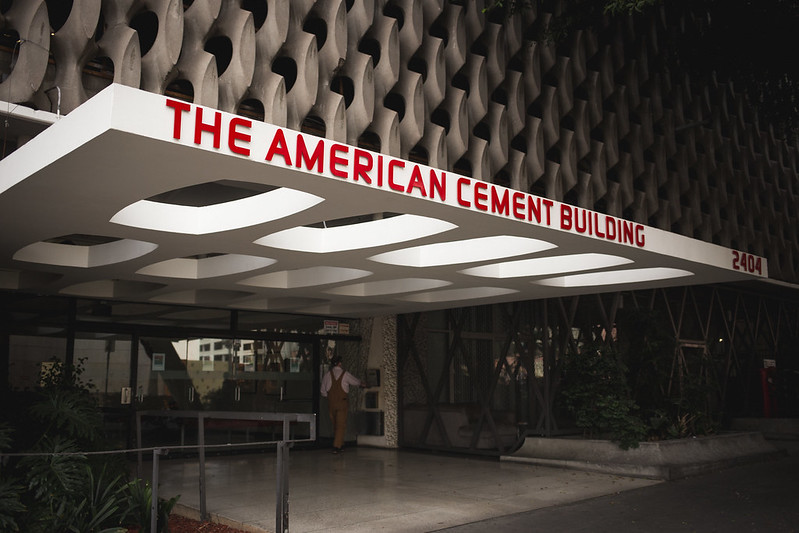 Apparently, the PTO headquarters is on the 9th floor of the American Cement building.  This past Sunday was the Ciclavia and the Alverado Street Market, so the city was already bustling with vendors, pedestrians, and cyclists.  It made it difficult for us to find parking, but we eventually found a $10 lot and walked down to Wilshire to this Mad Men-as-fuck building.  Seriously, the the lobby interior looked like the reception for Sterling-Cooper.

The space was intimate, but I loved it.  Desks held vintage accessories, sweaters, hats, and pocket squares on their tabletops while a clothing rack housed some cool shirts, mixing vintage with Japanese brands.  According to Ryan (and later on, Jesse himself) the entire pop-up was a mixture of PTO store inventory and stuff from Jessie’s personal collection.  It really was a I really wasn’t expecting to spend a lot of money, so I had to stay cautious. 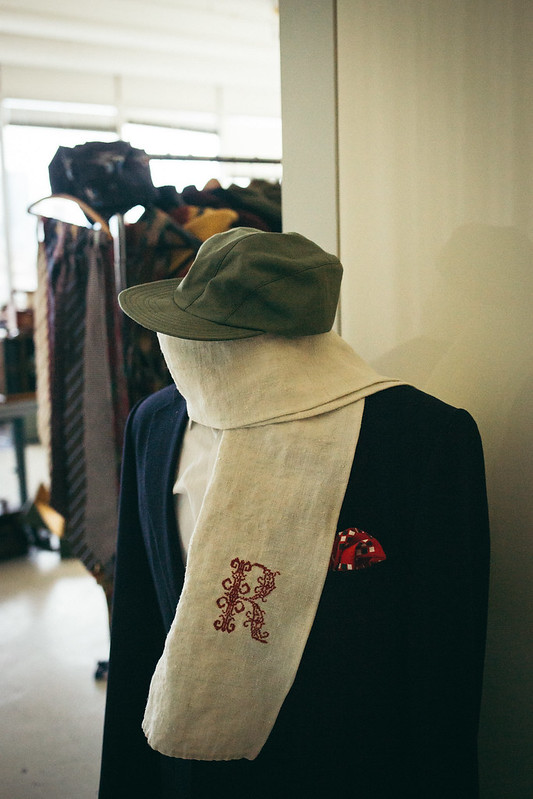 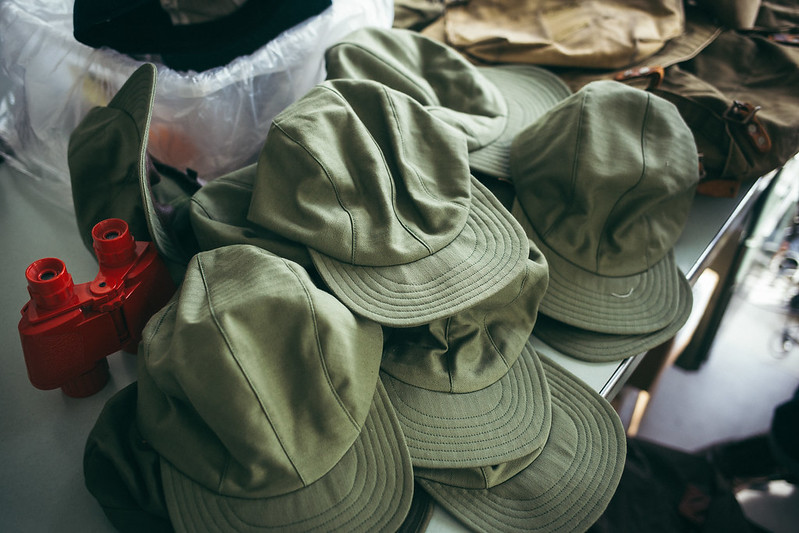 One item that Spencer and I both walked out with was the PTO Flier cap.  They’re olive, made of cotton, and are unstructured for a really comfy, slouchy vintage aesthetic; the design is based on the B-1 cap from WWII. For the extra mile,  these PTO hats are sized by hat measurements (instead of standard S-M-L) and even have leather sweat bands.  We were recommended to size up, so we both got 7 3/4, a few sizes larger than our true measurements of  7 3/8.

The website has them at $54 while we got ours for $45.  Not too bad!  I’ve been wanting a super casual cotton cap after seeing similar ones worn by Japanese workwear enthusiasts.  True ballcaps (like the flannel ones from Ebbets Field that Spencer wears) are a little too Americana/ivy for me and I like the more “rugged” aesthetic from these mechanic caps. I’m sure I’ll get more wear out of it as we get back to warm weather! 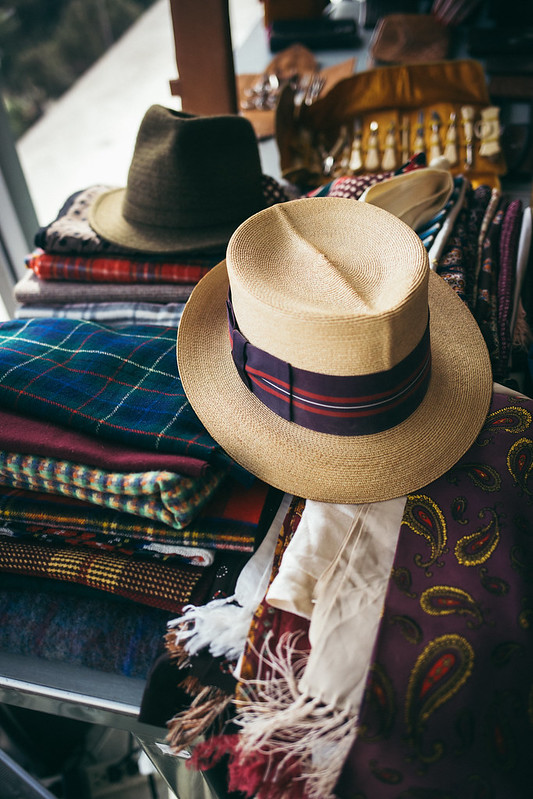 It’s not seen here, but I actually bought a cool silk (or rayon?) scarf that had a semi atomic print.  If you know me well, you’ll know that a “jaunty scarf” has been on my list for a while.  I know that I probably won’t wear it much, but I think stuff like this is pretty cool and definitely within my bounds.  Since we live in LA, a legit wool scarf would not see the light of day. 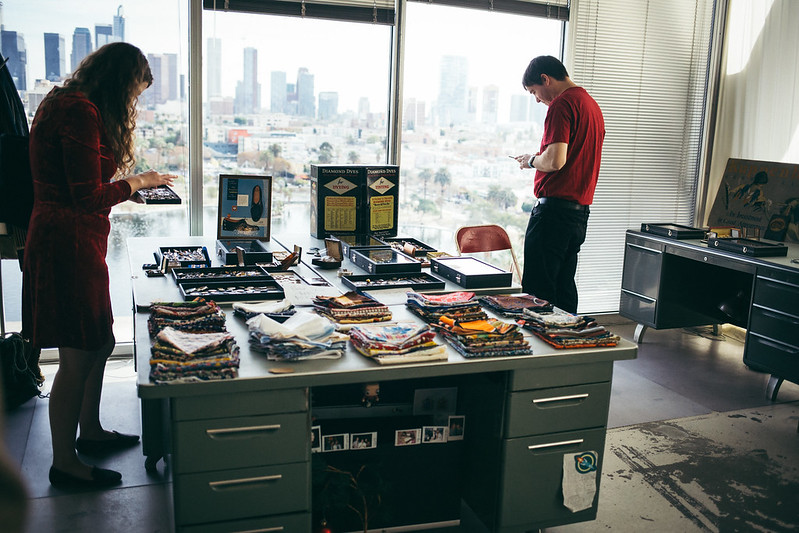 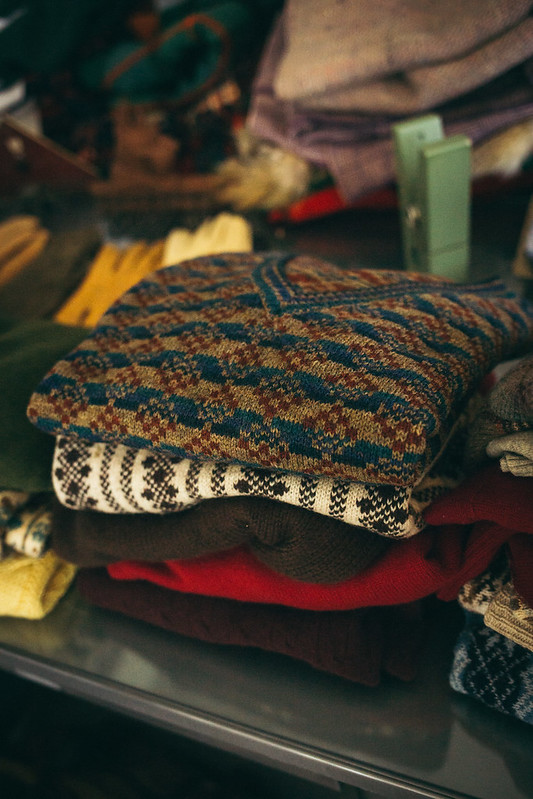 Don’t need more sweaters, so I just took pictures and moved on. 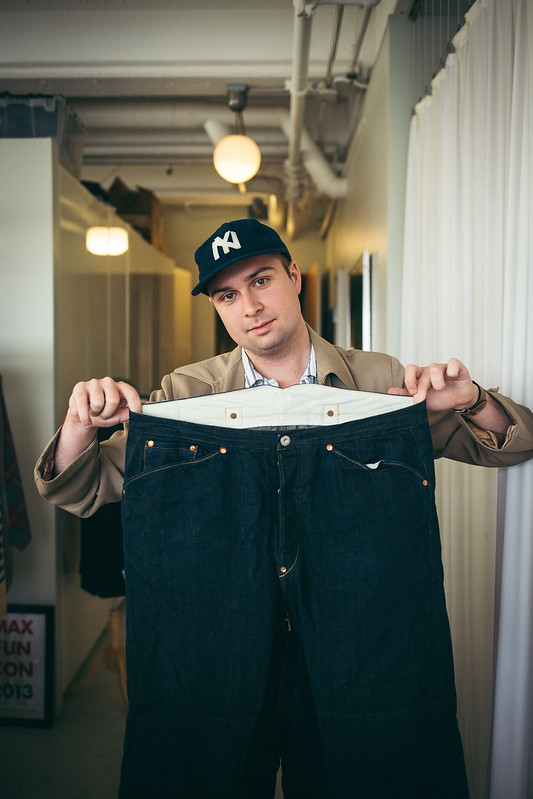 Do these jeans look familiar?  You bet your ass they do, because these are the LVC 1878 “Pantaloons”.  The jeans are from Jesse’s personal collection and he sold them to Spencer for $100.  You can see that they lack belt loops (in favor of a back buckle) and have dope western/frogmouth pockets; the only difference with mine is that the actual clasp is different.  Now Spencer and I can be jean buddies! 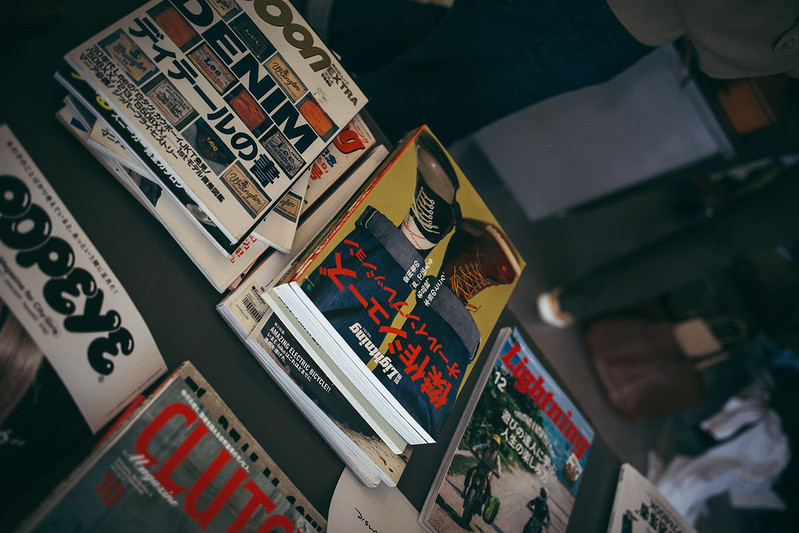 Japanese fashion magazines are something that I’ve been really starting to look at ever since I read the book Ametora, which documents how Japan took American style (and it’s marketing) and made it into it’s own thing.  I maintain that Japanese magazines are inherently cooler than American ones (since they show real people and not celebrities) but I can’t attest to the actual copy and writing since I can’t read the characters. Still, these magazines have some great pictures of both people and products! Jesse was selling backlogs for only $15! I didn’t get any this time, but I may keep an eye out for the future. They can be pretty expensive to buy new, but Jesse said that old ones can still be found on eBay for cheap. 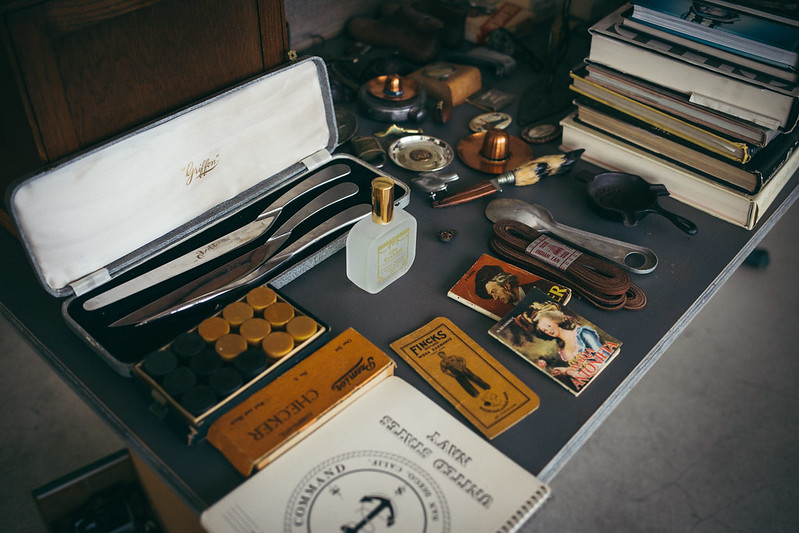 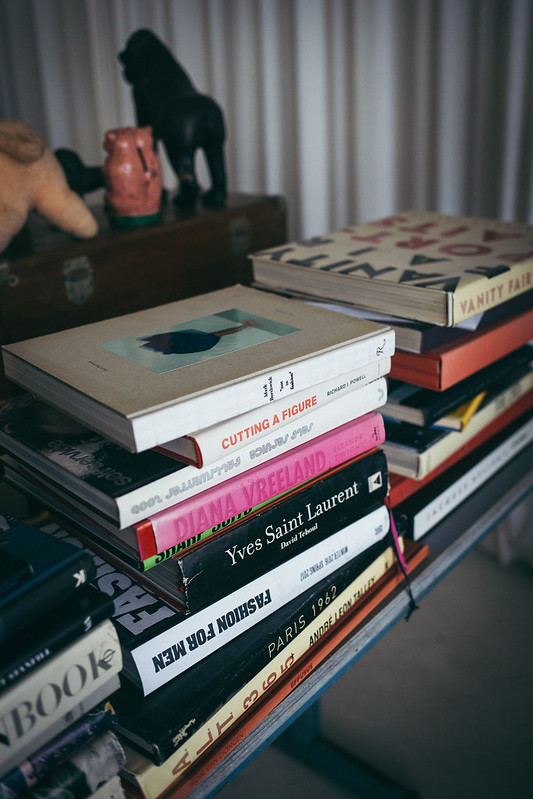 Jesse was also selling “coffee-table books” from his personal library.  Some were about menswear , but most covered a variety of topics like History, women’s fashion, and photography.  I bought a book called Jocks & Nerds for $15 after becoming instantly fascinated with the style presented in it.  Perhaps we need a book review on it…

I really recommend getting books like these since I think that they can definitely cover fashion in a non-direct way.  I get a lot of inspiration reading about other artists, especially photographers. 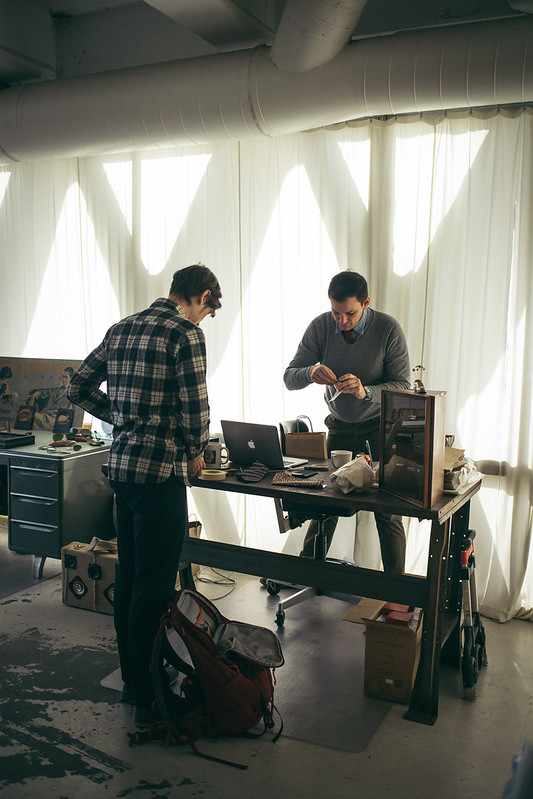 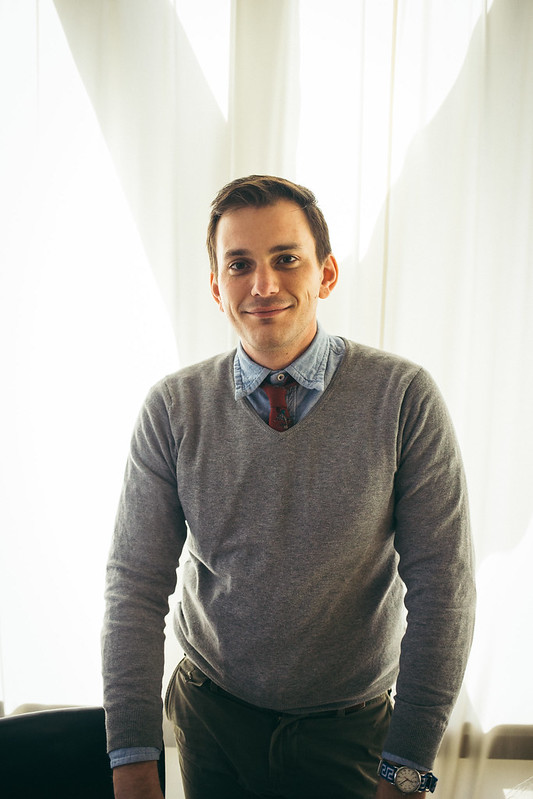 It was cool to finally meet Dan, a PTO employee, who is best known for scouring the internet for the #PTOMan highlights.  I’m proud to say that Spencer and I have been featured on it a few times, as well as some of my friends like Gerry and Zane.  He’s seen here wearing what appears to be a cool chambray(?) workshirt, grey sweater, and a cool vintage tie.  I love the use of olive chinos here, as it provides a very Japanese-Americana ivy vibe since most may argue that regular chinos would be the “best bet”.  Pshaw, we need more guys in olive trousers. 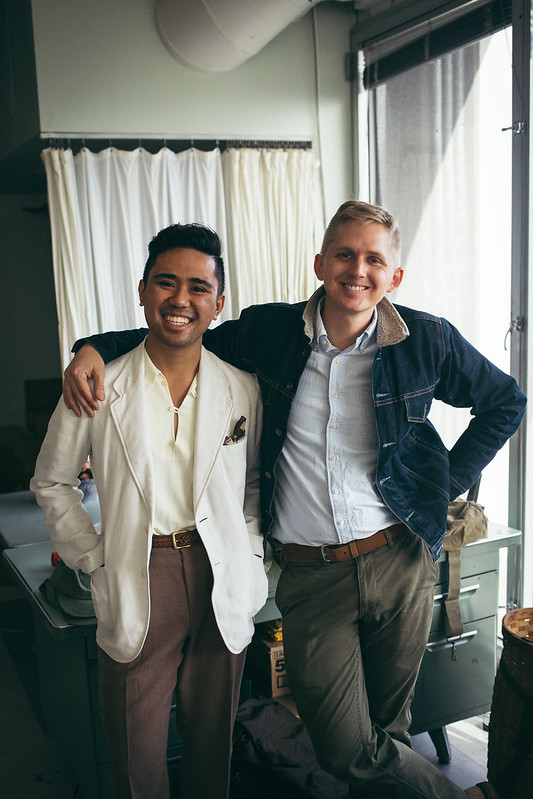 We had to take a picture with Ryan who was fresh a business trip to Japan!  He keeps his proper, ivy-esque style with an OCBD, olive chinos, and suede Alden derbies. Though I love the use of the shearling collar denim jacket.  It’s what sets his outfit apart from everyone else.  In fact, it kind of makes me want to grab one. 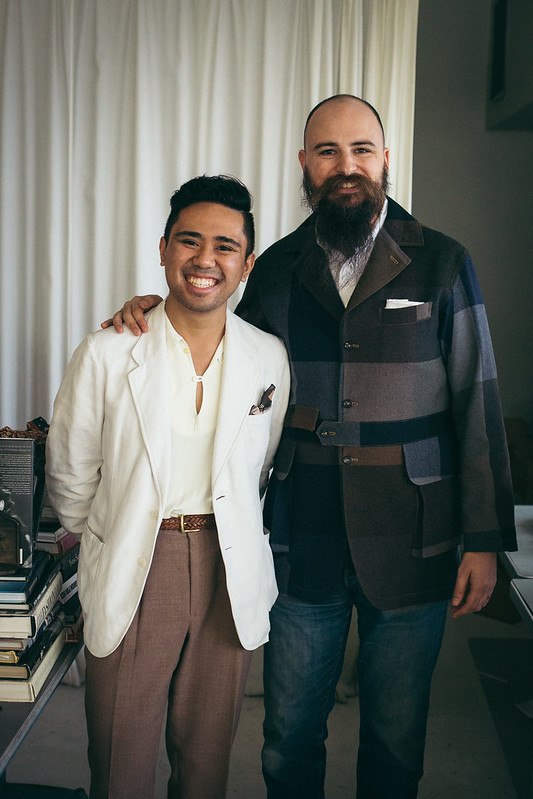 Here I am with Jesse Thorn! He was a swell guy who actually posted a picture of Spencer and me on the PTO instagram almost as soon as we arrived.  I definitely dressed to impress, so I showed up with my true vintage 1930’s rayon polo, 30’s linen belt back, and my newly acquired brown trousers that are definitely getting their own blog post (as they are from a thrifted suit).

You can see that Jesse’s rocking something interesting, wearing a pseudo patchwork, blanket-esque norfolk jacket that features a full belt. It’s got some cool pockets and a subdued color palette (even if it mixes them in an interesting way), which make for an awesome garment.  I have no idea on the age, but I wouldn’t be surprised if it was Japanese. 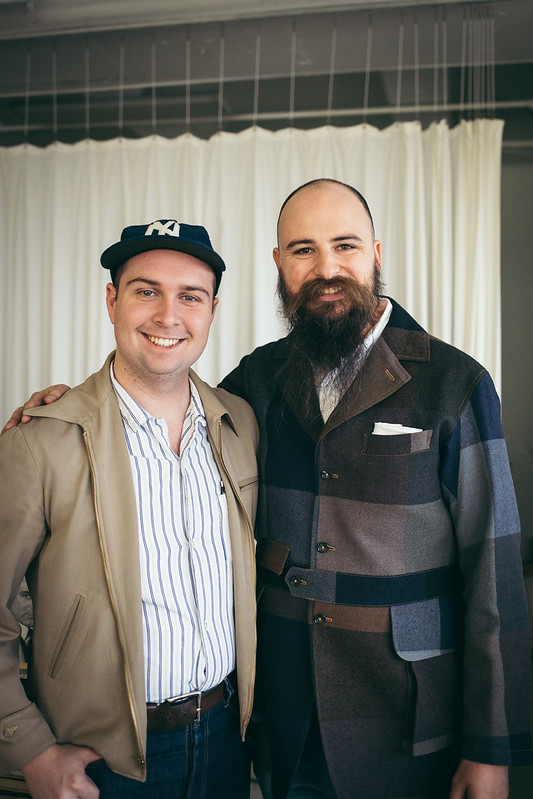 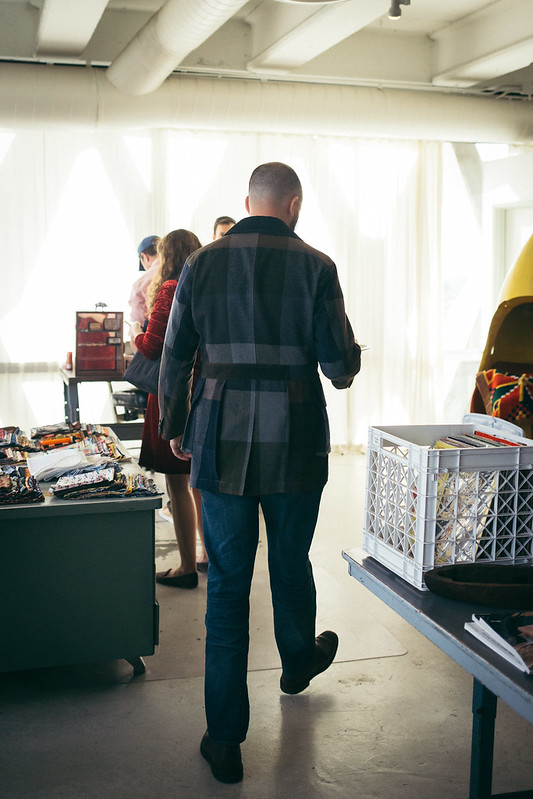 Fantastic fit on the jacket.

Getting to see the PTO office during this little market day was really cool! PTO is one of the few blogs that I look at and enjoy, so you can imagine how awesome it was to attend.  Plus you know that LA lacks any real classic menswear events, so you can’t count that ya boy is going to go to as much as he can.  Honestly, PTO was something that I looked at when I was starting to revamp my blog the past (almost) 2 years.  I love that they have a candid look at menswear that isn’t afraid to look at both vintage and contemporary tailoring, as well as a few odd styles thrown in for good measure. Plus, the fact that Jesse started his own podcast network (that isn’t related to menswear) and can do so much is very inspiring to me for my career.  It’s why we started the podcast.

The market was definitely a lot of fun and I’m glad I saw it and was able to go! Like I said, the reception was pretty small, but that may be due to the fact that I got there nearly when it began (11:30, it started at 11) and that I left after only an hour of browsing.  I am extremely sorry that I didn’t take a lot of street style pics, but I at least got to show you guys what it was like and even drop that we got to take pictures with the great Jesse Thorn!   We talked about the Bloke and life in Pasadena; I definitely wish that we were able to connect further.  However, I’m pretty confident that this won’t be the only time I’ll be able to talk to Jesse.