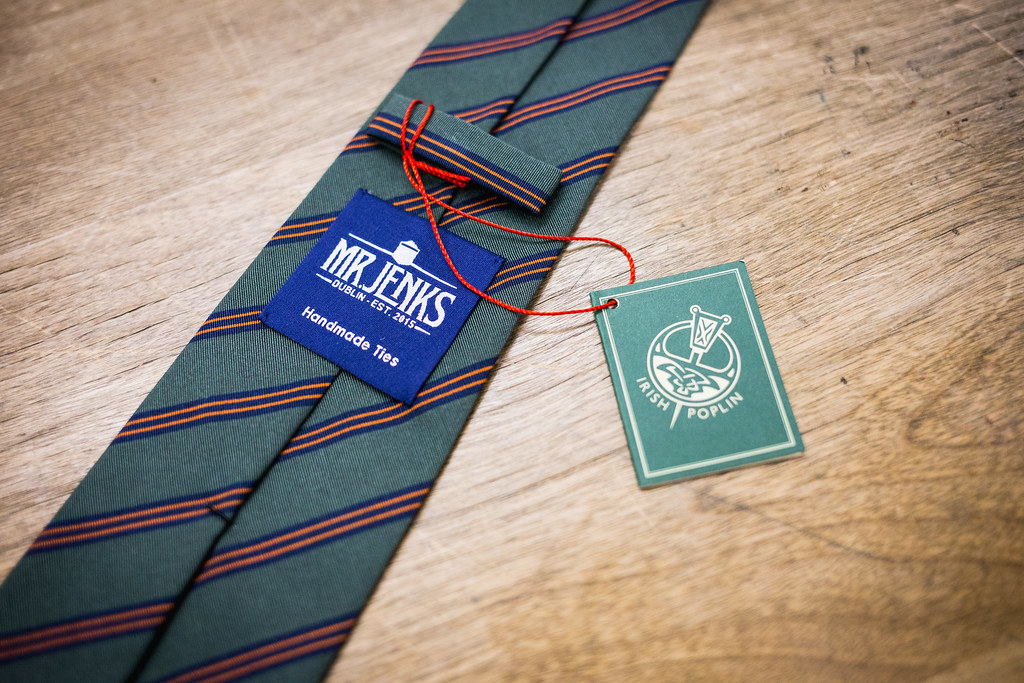 Disclaimer:  I received a tie in exchange for this review.

I was recently approached by William of Mr. Jenks to do a review on his Irish Poplin ties.  As I have little to no experience with contemporary ties, I knew that I had to take him up on his offer.

As many of you know, almost all the ties I wear are either vintage (from the 1920s-1960s) or thrifted.  The choice isn’t a price issue but more of a desire to find bolder, seldom-seen patterns.  However, this does make for a lack of “normal” ties in my wardrobe.  This includes ties that should be appropriate for high-rise denim.  More often than not, “normal ties” require more texture than the brocade silks I normally wear and feature a more traditional pattern to make it “safe”.

While those ties might be what regular guys look for, they aren’t at the top of my list (though maybe they should be).   I don’t really thrift as often as I used to, which is due to lack of time and the fact that I haven’t found anything other than polyester ridden crap in a good while.  And while my vintage ties have been serviceable for majority of my wardrobe, I find myself  at times yearning for something more contemporary.  Ancient madders and wool ties seem so cool to me and I only have a handful.  That’s where Mr. Jenks comes in.

Now if you’ve already heard of Mr. Jenks, please don’t count me out; I’m totally unfamiliar with most contemporary brands that aren’t the major players.  Hell I can’t even name tie manufacturers other than Drake’s or Shibumi.  But perhaps that’s a good thing as I’ve become a fan of smaller businesses (which has grown from my love of vintage).

You can read all about Mr. Jenks by going on their website , but it is an online men’s accessory retailer founded in Dublin, Ireland by William & Maeve.  With a dedication to quality and design, they’ve  started with beautiful silk pocket squares and wooden umbrellas (both made in Italy) that have been sourced and contracted intimately.  The current selection is small, but I’m impressed with what they’ve put up so far. Their pocket squares in particular are quite nice, with lovely paisleys that work for any contemporary outfit.

Their Irish poplin ties are their latest venture and is the subject of this review.  Instead of Italy, they keep manufacturing of these pieces in Ireland.  I’ve never heard of Irish Poplin before (ignorant Ethan strikes again), but after seeing their video and reading about it here, I’ve gotta say that I’m impressed.

Irish Poplin, a 50/50 blend of silk and wool is made by one manufacturer that’s been doing it since 1837.  The reasoning behind this combination is to create a tie that has similar properties to silk but with a stronger knot hold and elasticity thanks to the wool.  According to William, the texture catches some people off guard, but that is the beauty of the Irish Poplin Tie.

At 80€, these ties are a little bit pricier than something from your local Macy’s (or eBay), but much better than spending the same price at a rip off like Banana Republic.  It’s about the same price as something you’d get from J. Crew, but these are made of a much more interesting fabric and have a much more classic design (J. Crew ties are way too narrow).  Plus, you’re paying for something more artisanal and interesting than just a regular silk tie from a mass produced brand.

They currently only have six designs of  Irish Poplin ties in stock at the moment, but I’m sure that it will expand as time goes on.  They keep their paisley theme going with two in mustard and burgundy, but the rest are all conservative repp ties.  I decided to go with the Green and Orange Stripe for the review.   Shipped via DHL, I received the tie fairly quickly and immediately took pictures. 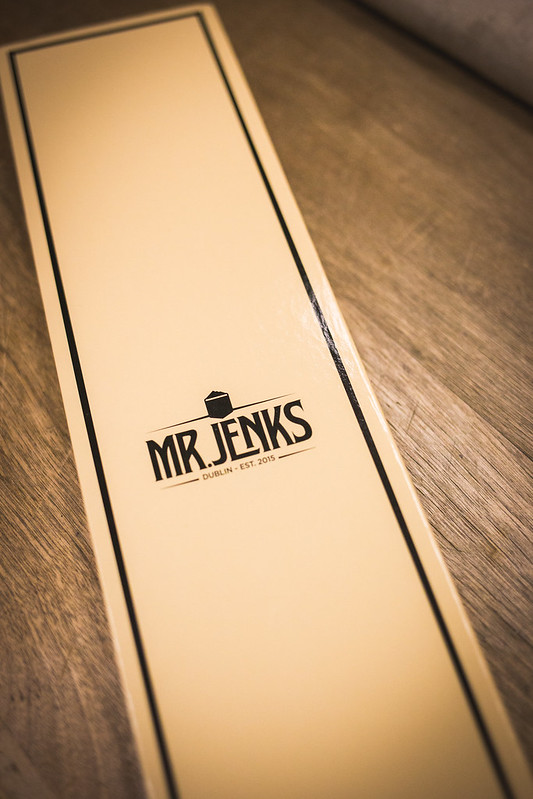 Inside the DHL envelope was a long tie box with the Mr. Jenks logo.  Most of my ties are bought “open” (no box) or have shipped to me straight up in an envelope, so this was my first true tie unboxing experience.  That’s one great aspect of buying new: the fact that you get to open and wear a garment that has never been worn before. 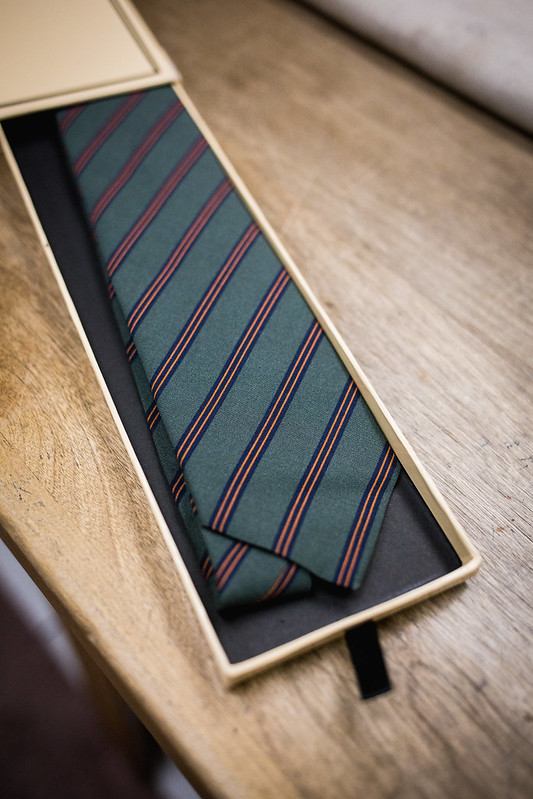 The tie was folded nicely within its box.  You can see that the front tip was a little wrinkled as that end was sticking through the bottom of the box. Might have been a packing error or perhaps the tie slid during shipping.

The tie itself feels great.  Most new 100% silk ties that I’ve encountered have felt a tad too shiny and slippery; this might be due to the fact that all my ties have aged over 50 years and have developed a different texture than what was originally done in the 1920s-1940s.  However, the wool + silk quality of the Irish poplin removes that overtly silky feeling.  It’s a little bit rougher and little bit weightier, but I definitely like it.  It feels similar to what I assume are also wool-silk blends from more “working class ties” of the era.  The woven ridges also add some extra interest, though that is fairly common on most ties.

Even though the tie is weightier, it’s not thick like something you’d get at a regular department store.  This prevents a huge knot from forming, even if you don’t use the dreaded full windsor.  It ties a pretty tight knot, with the wool preventing it from creasing after a wearing. 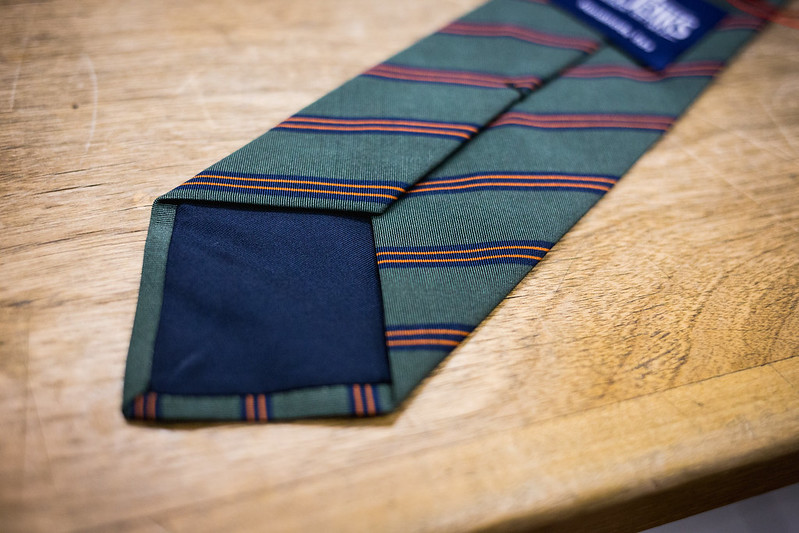 Since it’s a contemporary tie, the tie is much longer when compared to what I’m used to.  Vintage ties are very short and are meant to hit the top of the waistband of your high rise trousers.  Mr. Jenk’s ties are fairly long at about 60″ at my estimation, which poses a slight problem for vintage aficionados, but it honestly isn’t a big deal if you double-wrap your Four in Hand knot and you simply tick in the back blade.  The fabric will allow the tie to keep it’s knot well and drape in a perfectly careless way.

The width is just over over three inches, which is probably the perfect width.  You might say that vintage 30s-40s ties are wider, and while that may be true for some, most are around 3-3.5 inches.  The reason they look wider is because vintage ties widen aggressively while modern ones don’t; this can be attributed to the fact that vintage ties are shorter, and therefore have less “space” to widen.

The resultant tie is still a perfectly classic piece that looks like the madder silk, repp stripe ivy ties of the 1950s-60s  And even then most of those ties are much slimmer than this one (less than 2.5″), which makes for a very dated Mad Men look.   I can tell that I’m going to wear this tie a lot for situations that don’t require something as extravagant as brocade silk (or any shiny silk for that matter). 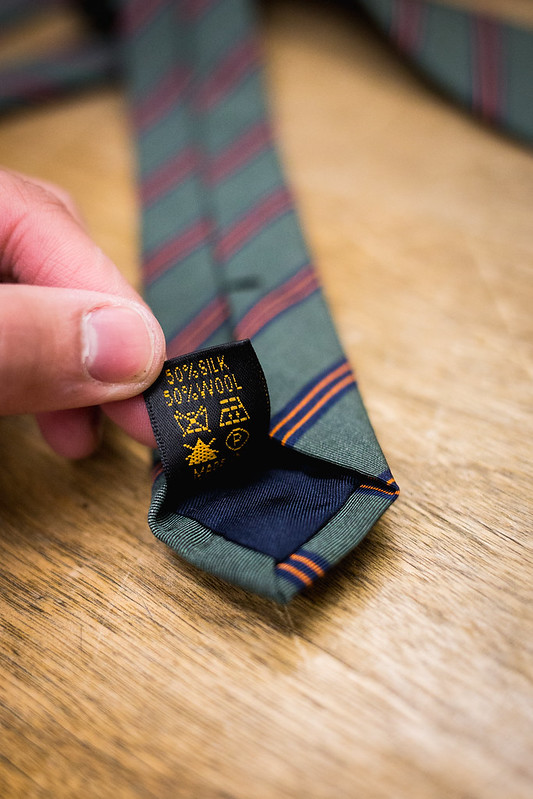 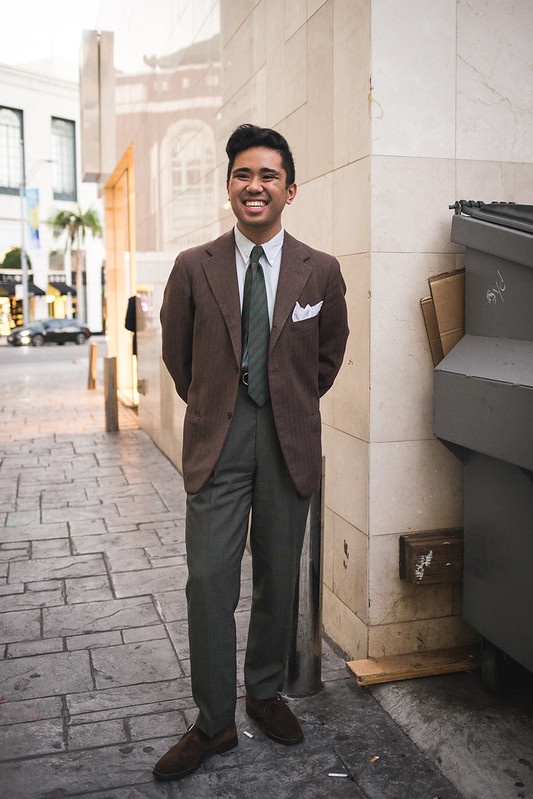 Even though this Irish Poplin tie is contemporary, it fits in perfectly with classic clothing.  However, I decided not to do my modern take on 30’s attire and instead went with something more contemporarily classic with some ivy vibes. Hell it’s close to what you’d see from the Drake’s guys.

I went with the 1950’s Brooks Brothers sack suit jacket (which is literally my favorite jacket) and a hopsack button-down collar shirt, both of which pair well with the tie to give it that classic ivy vibe.  I have no idea what the age is of the shirt, but I’m assuming it’s 80s-90s due to the short, un-rolled collar points.  Still, it’s something cool that I own!  I took some liberties with the trousers and opted for the plaid, double pleated grey trousers from my first experiment.   Pleats don’t usually jive with ivy guys, but I enjoy them since they add some visual interest to a high rise trouser.  High rise flat fronts are just too boring! 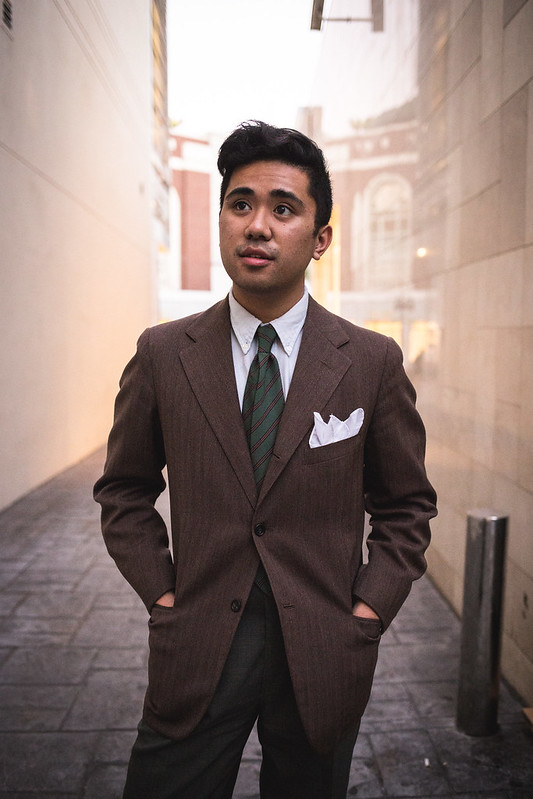 I’m going to admit that it’s a little weird for me not to wear a striped shirt with this striped tie.  The lack of patterns on the jacket is also new for me, since I usually have to two patterns at once (instead of just one).  However, it works out as I wanted to highlight the Mr. Jenks tie in this outfit.  You might say that the small herringbone weave on the jacket counts. 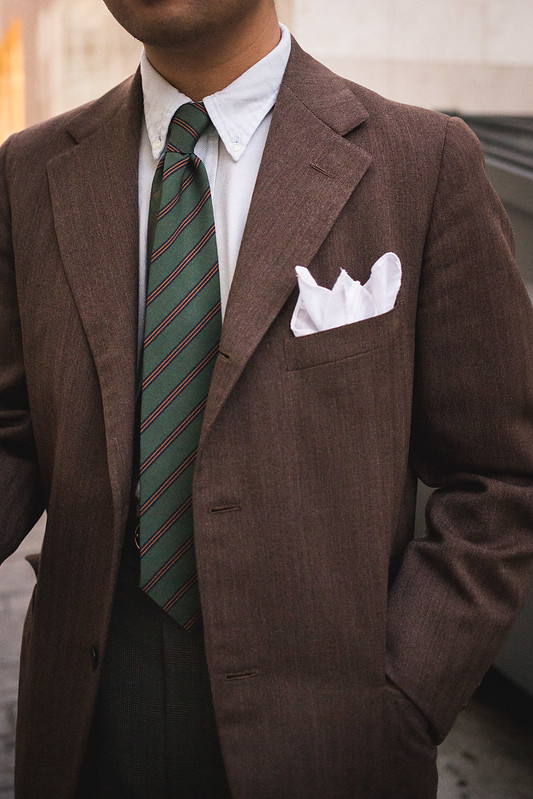 Obviously the tie is much too long when compared to my vintage ones, but that’s nothing a little “tie tuck” can fix.  I kept the front blade at the normal length (right at the belt) and simply tucked the extra long back blade into my waistband. It’s called “sprezzatura”.

Mr. Jenks has started offering classic ties in a fabric I didn’t know existed: Royal Irish Poplin.  The wool-silk blend creates a nice vintage-feel for the tie while providing a strong knot and shape.  Obviously the ties they offer aren’t vintage in cut or design, but these aren’t meant for guys who want a strict vintage look.  The Mr. Jenks ties are extremely classic in regards to print, offered in awesome repp stripes, and have a slightly slim nature that work for the contemporary guy.  I will say that it definitely works if you want an ivy/60s look, whether it’s full Mad Men or not.

I can definitely recommend you guys to try them out, as they are affordable at only €80. Hopefully they add more foulards to their repertoire, as a healthy collection of prints and stripes are the key to an “Ethan Wardrobe”.   Hell, don’t forget to check out their pocket squares; paisleys and retro-cartoon illustrations are dope choices to pop in your breast pocket!  With free shipping to Europe and North America, it’s definitely worth a shot.

As I stated earlier, I don’t have much experience with contemporary clothing, let alone ties.  I sincerely hope that you guys find this useful and that it gives you some non-vintage options when going for your neckwear choices.

Big thanks to William at Mr. Jenks for reaching out and giving me an opportunity to write about their pieces.