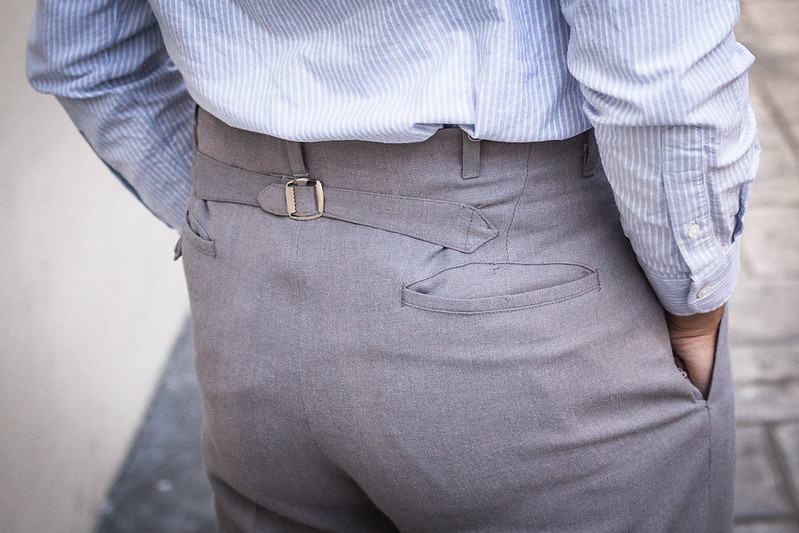 I apologize for the ass shot, but these cinch-back trousers make it worth it.  They’re definitely hard to find, as I’d only seen them in pictures and illustrations before now!

Even though you can buy trousers pretty “okay” OTR, it’s just a fact that everyone’s waist tends to be different and even fluctuate.  This is what makes suspenders/braces better than a belt, because it will always keep your trousers up, no matter how they fit on your waist.  However, menswear has always had other ways to do this; one of those methods was the cinchback (or buckle back).

Cinch backs are similar to  side-tab adjusters except that it is only found on the back of the trousers rather than on the sides. They allow you to adjust the fit of the trousers much more easily than belts, since you can pull (or loosen) until you feel its comfortable. The cinch is bit more rugged than the side-tab, as this feature is mainly found on more workwear pieces like jeans or chinos.  You can definitely find them on sartorially-inclined trousers, but you’ll see that it’s almost always on something with a tough texture, like tweed or heavy wool.  When vintage is concerned, you could potentially come across them in Edwardian-early 1920s clothing, but were cast out in favor of belt loops and braces.  The repro brand SJC even put cinch-backs on their chambray work suit. 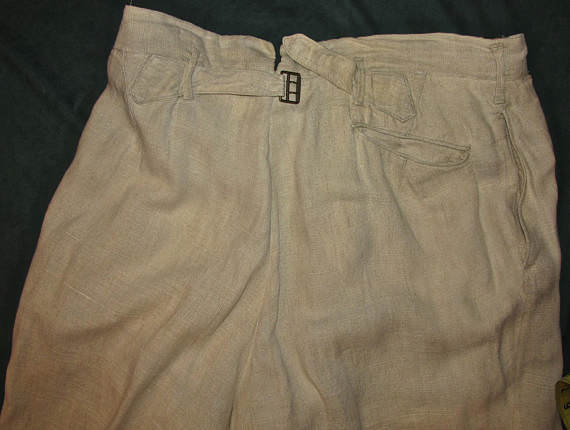 1900s linen plus-fours with a cinch back. 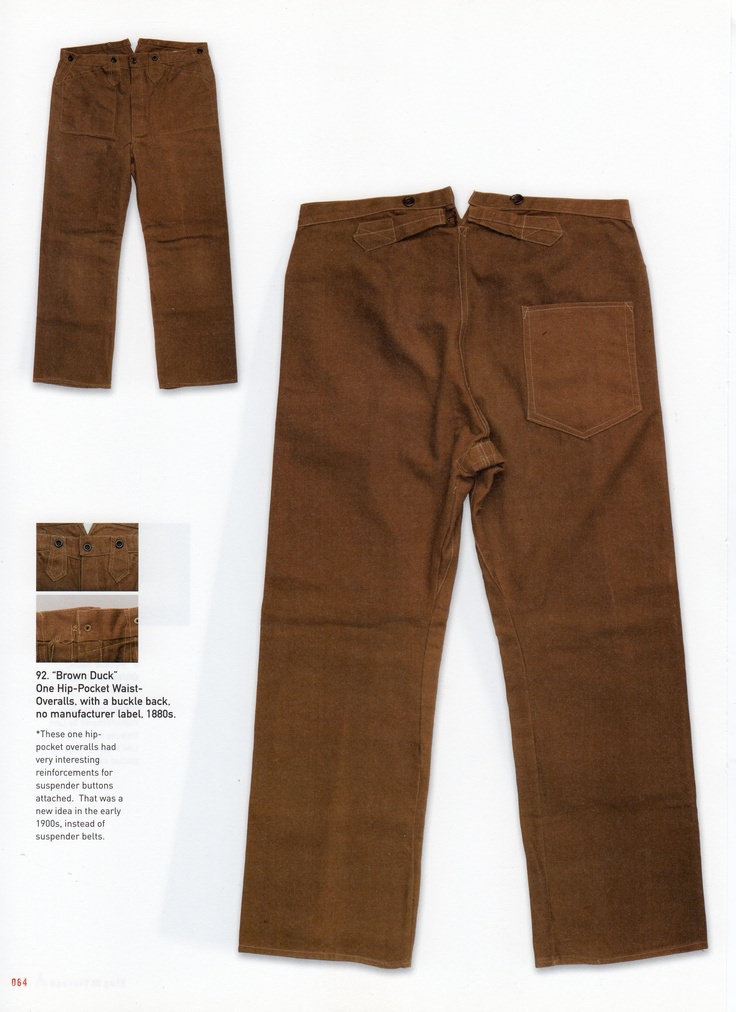 Vintage work trousers from the 1880s. 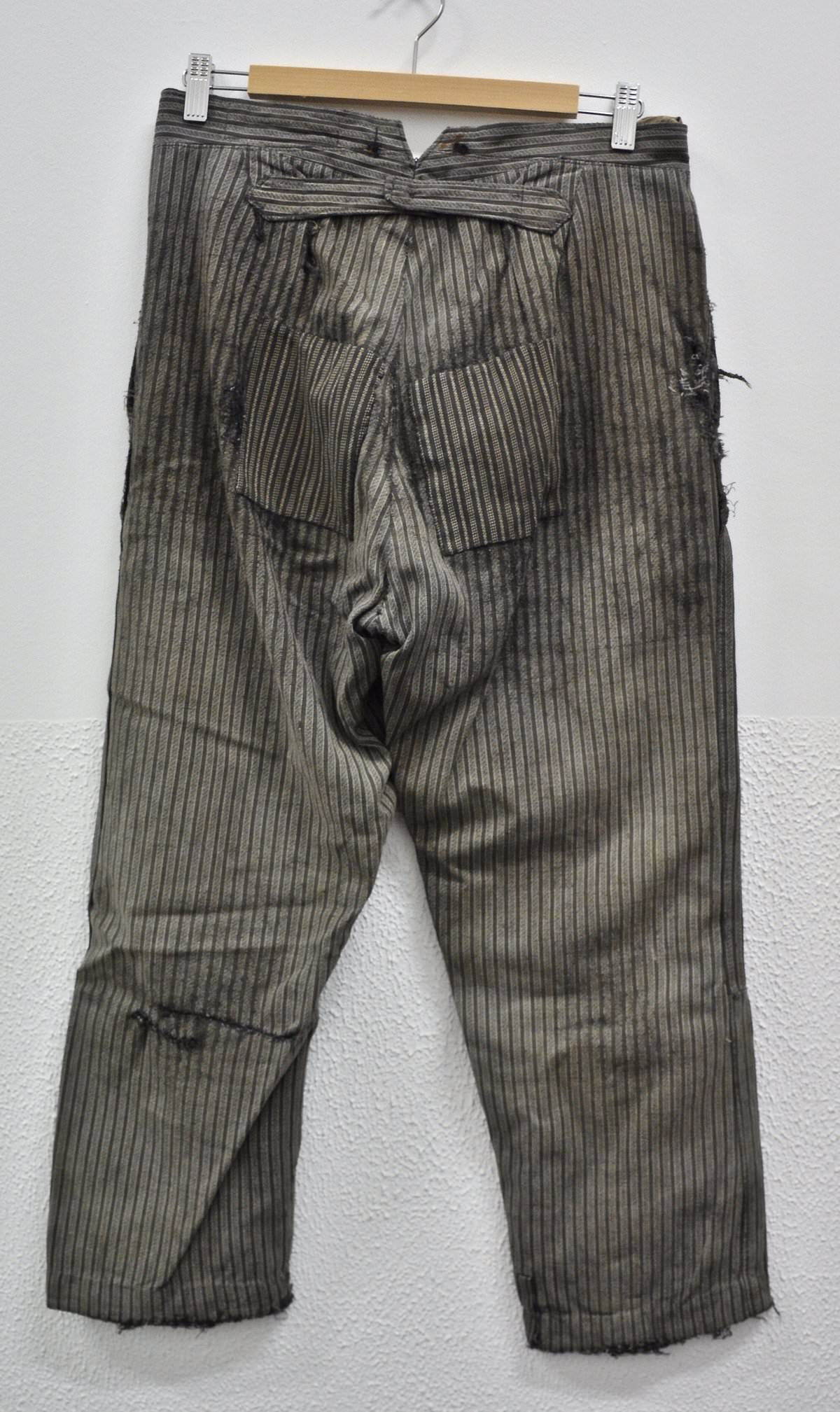 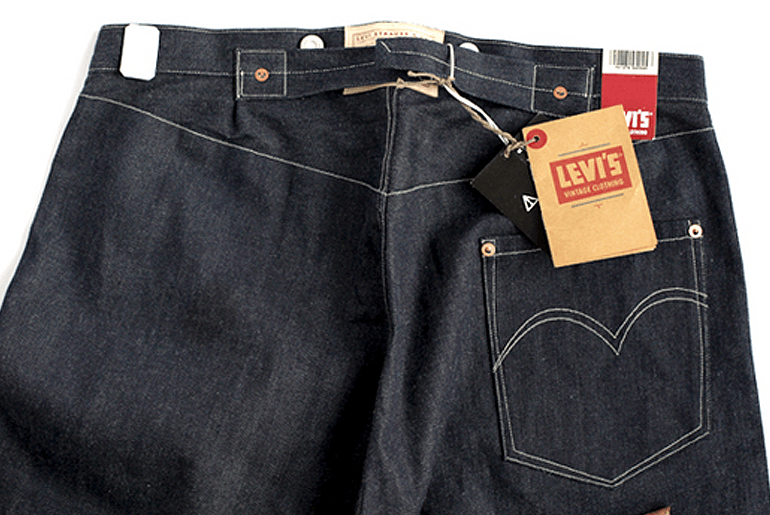 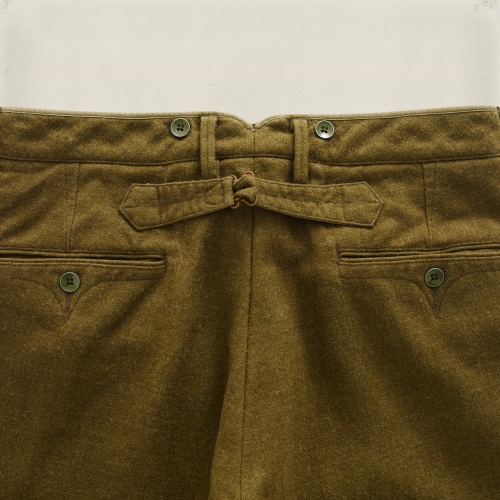 Contemporary army-style trousers with a cinch back.

During the Ivy-style movement of the late 1950’s, it seems that designers brought back this archaic design and put them on wool trousers and chinos.  More often than not, they were also advertised with “slim lines” and flat fronts, both of which would come to define the ideal Ivy look (along with a 3-roll-2, natural shoulder jacket).  It was a short lived fad, as it came to be seen as an unnecessary detail.  Hell, ivy guys don’t even like belted-back jackets since they can interrupt the cleanliness of the jacket.  Whatever the hell that means.

Since they didn’t fully catch on, they can be pretty rare to find.  If you do find them, don’t be surprised to see a high price tag.  Until very recently, I had never seen one in real life, only in pictures and illustrations!  I honestly prefer side tab adjusters for my trousers since they are much more easier to use, but like I said before, the cinch/buckle is a more interesting detail (like a belt back) that is missing on contemporary classic menswear.

There’s an article on Ivy-Style where you can learn more. 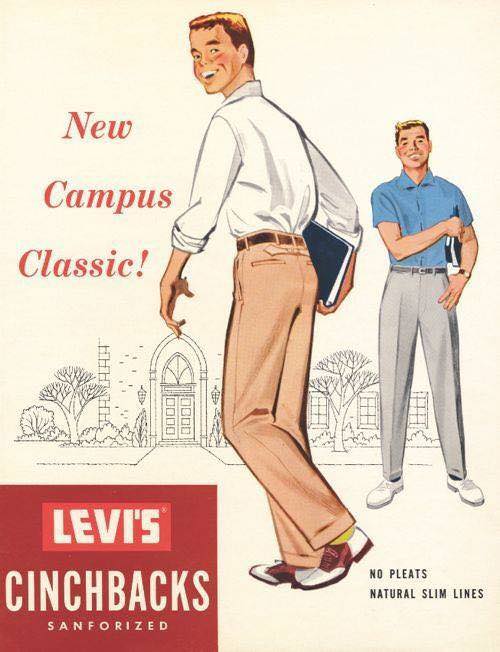 A few weeks ago, I got a facebook message from my friend Marc. If you remember correctly, Marc was last seen at the Aloha Party at Paper Moon Vintage where we identified him as the the guy who knows almost everything about vintage suiting and ivy style.  Since he started collecting in the early 90s, he has obtained some of the rarest shit out there.  His knowledge and ability to scour eBay usually results in some great finds and if you’re lucky, he’ll share them with you.

Imagine my surprise when his message contained a link to vintage grey trousers that were completely deadstock, tags and all still included. I bid up to $60 and expected them to go higher, but no one else bid against me! Soon they were on their way to LA. 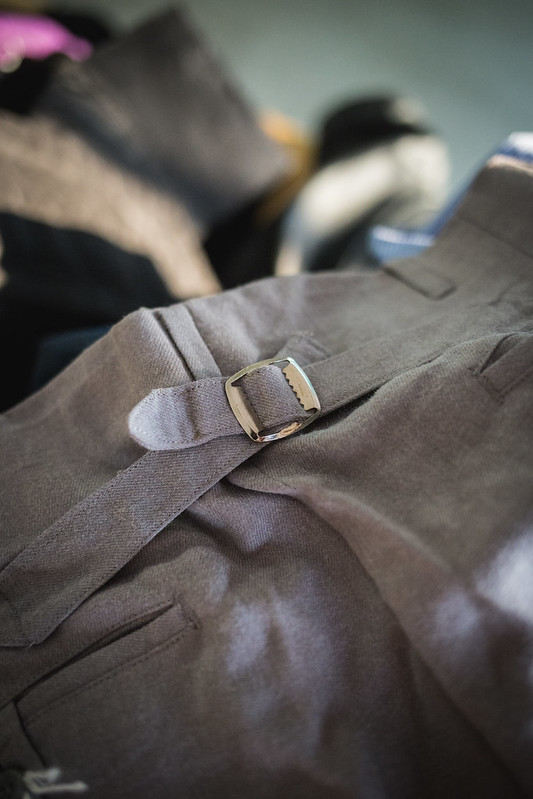 Apart from a slightly musky, “old” scent, these trousers were perfect.  The color is a light grey that was definitely different than the mid-greys that I tend to wear.  Could be a cool choice for me, since there are times when I like to do some high contrast.  In terms of feel, they were incredibly soft and lightweight, almost like a fancy pair of pajamas.  If you look closely, you’ll notice that there is a small twilled weave. 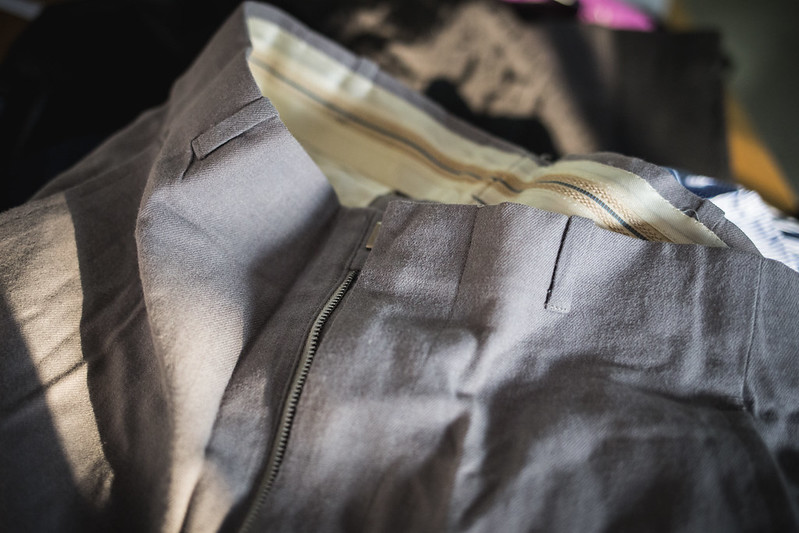 As I said in the Dapper Day at NHMLA article, I’m really starting to try and bring my 1930-40s garments into contemporary wear.  As a result, I’m trying not to care about the particular year of the garment.  According the seller, these flannels are from the 1950’s and you can definitely tell from the design.  Like the ads we saw earlier, these trousers are flat front (no pleats) and are slim in the leg (about 8.5″ leg opening). Interestingly, these have a hollywood waist, which means that it the waist connects seamlessly to the legs of the trousers; there isn’t a true waistband.  However, the belt loops are not dropped, which is a really odd choice.  Most of the time, hollywood waists have dropped loops.

You’ll also see that the inside of the trouser has a thin strip of a rubbery material that is used to keep shirts from getting untucked. 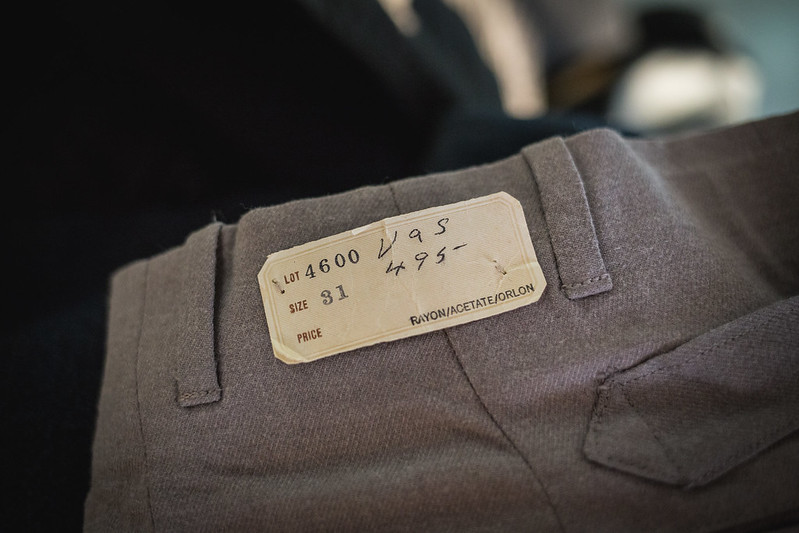 Being deadstock, these trousers kept their original tags.  The label above is interesting, as it doesn’t show how much these were back in the 1950’s, but do display the fabric composition and the waist size.   The fact that this is rayon/acetate/orlon is incredible to me, as this really does feel like a true wool flannel, even if it is super soft.  I wouldn’t expect synthetics to feel this good! 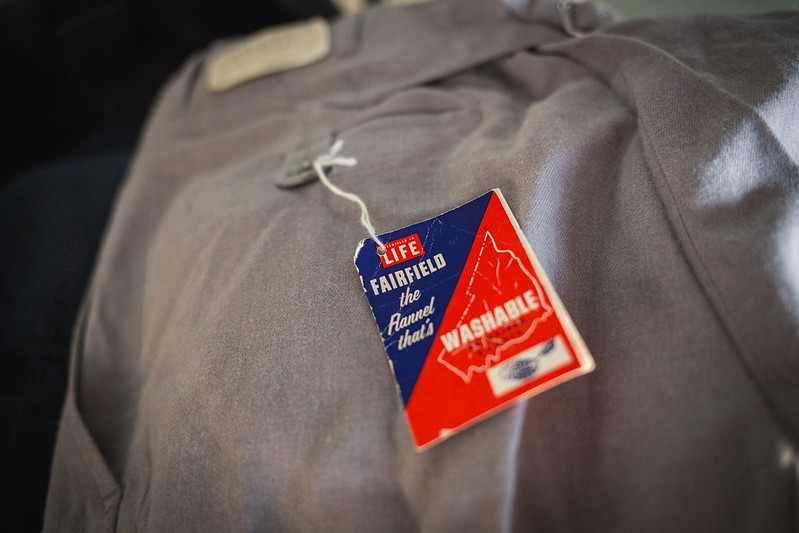 I can’t get enough of old labels.  There’s something so cool about the graphic design that does it for me!  The red and blue definitely give me a Levi’s vibe (especially when you look at that cinch back advertisement.  I tried looking up the brand “Fairfield” but I couldn’t find anything to go on.  They were probably just a local brand that hopped on that ivy cinchback craze.

After getting them dry cleaned, I had the trousers let out a bit at the waist (I’m in between a 31 and a 32) and had then only hemmed up with a cuff.  8.5″ leg opening isn’t too bad, so tapering that half an inch was really unnecessary.  Plus, I had already “modernized” the 9.5″ legs of the navy suit at Dapper Day, so wide legs aren’t that scary anymore.   The alterations were quick and I was ready to wear them! 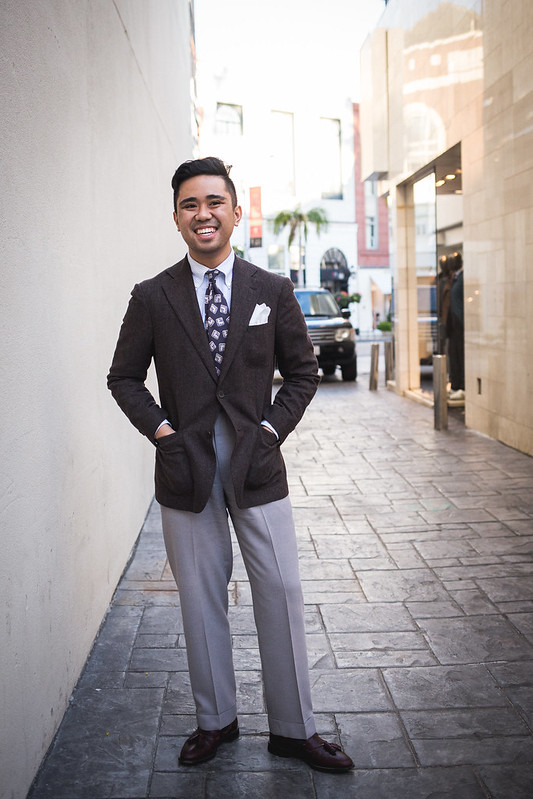 I must say that these trousers are among the most comfortable garments I own.  I think the only thing that feels better are the striped flannels from Friendsgiving 2016, though I’m giving these cinchbacks the edge due to the cooler details.  Again, they are lighter than what I’m used to wearing, but that doesn’t really matter to me as they certainly pair well with brown jackets.  I’m sure they would work equally as well with a navy one.   The contrast they give is pretty interesting, giving an outfit a sleeker vibe than if I wore my typical mid greys.  They remind me more of Mad Men than Golden Era a suiting, even though I’m sure that this color was present in the 1930s-40s. 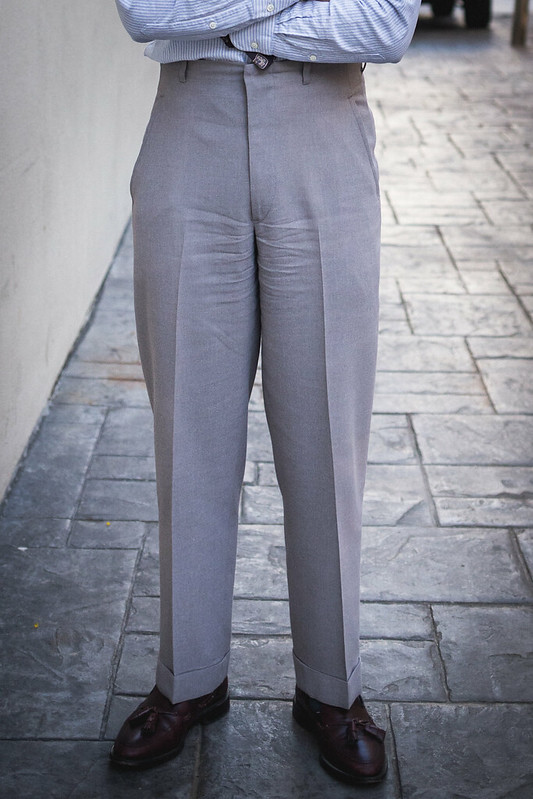 The fit is pretty spot on, though there is a little bit of fault due to some slippage in the back rise (a problem I tend to have).  In order to test out the effectiveness of the cinch-back, I opted to not wear a belt.  I found that that a belt will perhaps be needed, since there were a few times where I was adjusting both the belt and where it sat on my waist.  Some might find it redundant, but some gents did opt to wear both; you can see evidence of that in one of the illustrations. 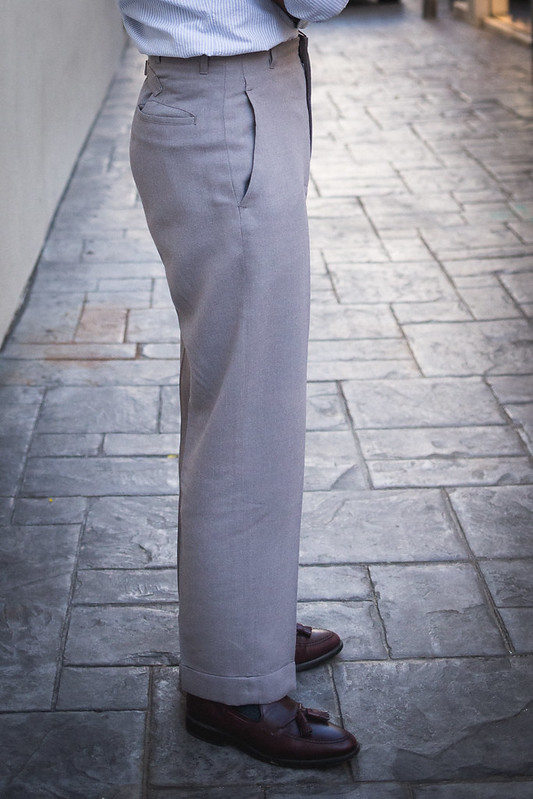 Here are the natural lines of the trouser.  As you can see, it’s a fantastic silhouette.  The 8.5″ is definitely slimmer than most of the vintage trousers I’ve seen, but it’s not skinny at all; it also isn’t too wide to wear in the modern world.  I opted for a shivering break and a 1.75″ cuff.  Adding the cuffs felt really good as most of my trousers have faux-cuffs due to not having enough material to let down to make a proper turn-up.

Like my Dapper Day outfit, I went with tassel loafers for footwear so that it was a more “modern” outfit. 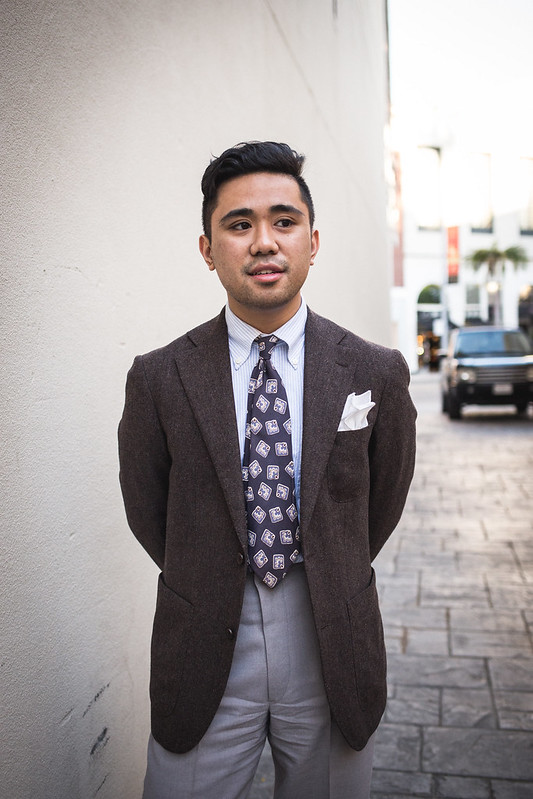 In terms of styling, the trousers, I went with some typical Ethan Style, which essentially means striped shirts + patterned ties.   The tie is a 1940’s abstract-print and is worn with my blue stripe OCBD from Kamakura and my soft flannel jacket from Suit Supply that boasts a cool brown fleck and patch pockets.   A soft jacket and grey flannels isn’t unfamiliar to classic menswear, but it’s this particular styling that gives it some vintage vibes.  If you wanted to modernize it, I’m sure that a spread collar shirt and a tightly patterned foulard would do it. 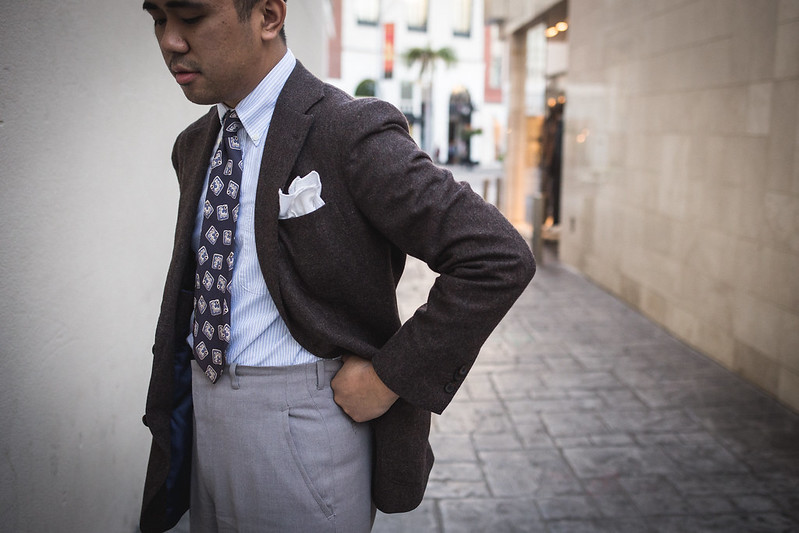 I’m very happy that I obtained these rare, cinch-back flannels.  I honestly wasn’t expecting to get them for such an affordable price, but sometimes things work out!  The trousers are incredibly well made and the condition was fantastic.  Even though vintage garments can be deadstock, there can be staining or fading; luckily that wasn’t the case with these.  I can imagine that these will see a lot of wear,  simply because I love grey trousers.

The cinch back is definitely  a great detail, as trousers seldom have special details (when compared to jackets).  Fabric can go a long way, but it’s these small features that keep me coming back to vintage.  It definitely helps that the trousers are in perfect condition, which means that I can keep these guys for a long time!  Perhaps some day, I’ll make some hardcore Ivy aficionados jealous even though these cinch backs seldom gain traction outside of Japan.  Hell, I don’t think many contemporary guys like it!

Having a cinch-back was never on my grail list (I still prefer side tabs), but it’s great to add one to my collection.  I know I told you guys that I was planning on saving my money and that I was putting a stop to random eBay purchases, but I think that this piece was worth it!  However, this brings my count of grey odd trousers to four, which isn’t too bad, but can be excessive for most guys.  I really need to bring up the count for my brown trousers, as I feel that’s where my wardrobe is currently lacking…