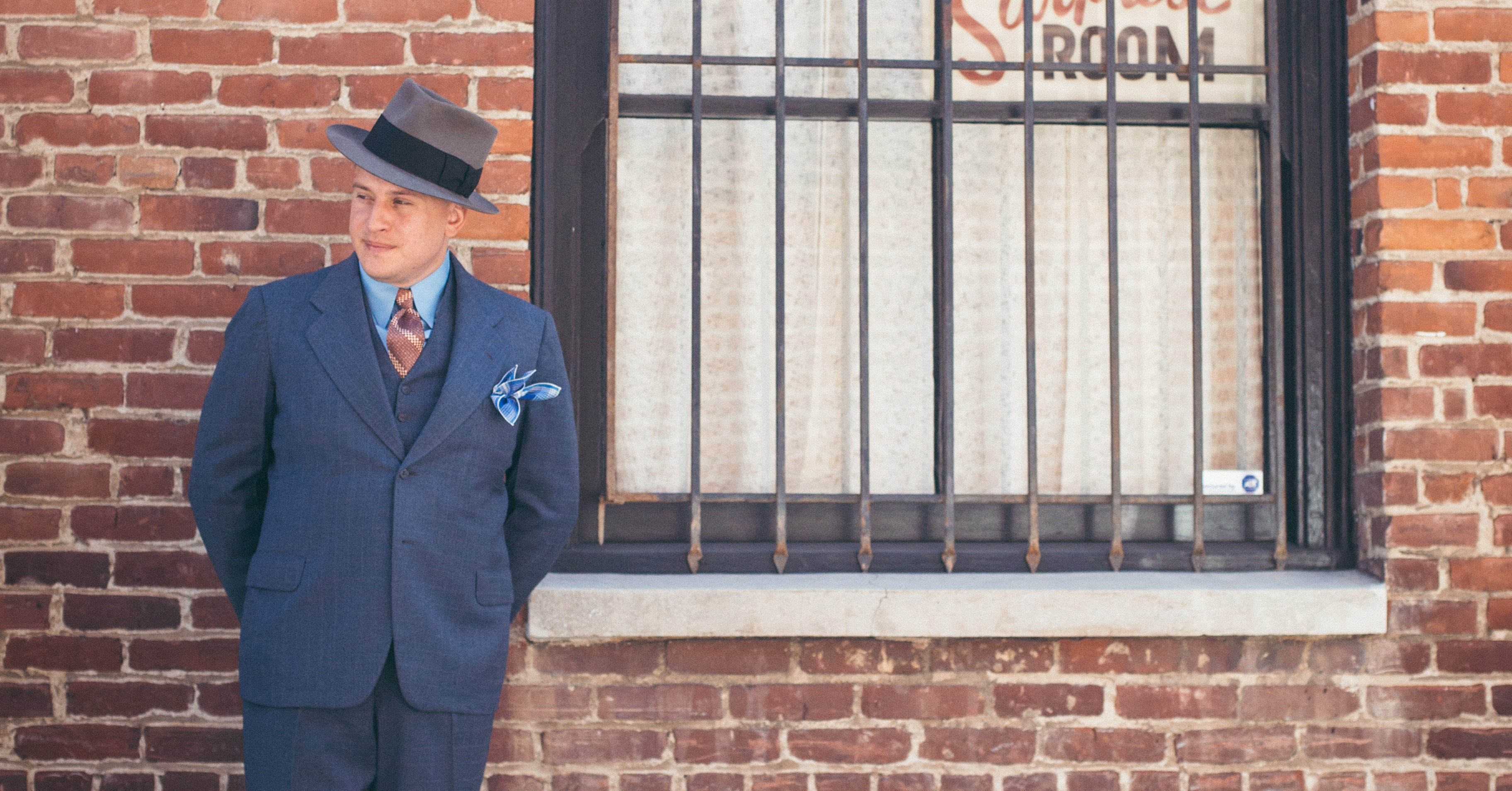 We talked about doing interviews and features a long time ago, and I’m glad to finally bring that to the blog.  Our first guest is Cody Wellema, of the Wellema Hat Co., who has an atelier that is literally five minutes from where I live.

This is a supplementary blog post to our podcast interview with Cody, found here.

As small as the vintage community is, I had only met Cody officially early last year.  I distinctly remember getting a few notifications from a small hatmaker account two years ago and awkwardly saying hi to a white dude in a fedora at Inspiration.   Little did I know that this incredibly nice and talented artisan would grow  to over 10k followers in a little under two years.  Spencer, Blake, and I ran into him again at Inspiration 2017, but we still didn’t really talk; all I knew was that he was pretty close with other guys in the vintage community, like Damian Monsivais.

When I started doing research and photography for my vintage tie essay, I put a blast on Facebook asking if anyone has cool ties that they would love to be featured on the article.  Cody actually messaged me and invited me to take pictures of his personal tie collection; I accepted graciously, as I had never been to his space before.  When I finally did that fateful Saturday, I was blown away.

Now Cody is a great friend that I see almost on a weekly basis.  I’ve been happy to provide him with some photography when I am able to (as a friend, not as a job mind you) and I’ve frequently gone to him for advice on life and menswear.  He’s a young guy like me and it’s amazing to see him become so successful, doing what he loves.  Cody has already been featured in Clutch Magazine, Men’s File, and The Styleism but I thought it would be cool to share my own take on this gentleman.  As stated earlier, this is a companion blog post for the podcast episode, where we talked for an hour (unedited) about his business and his style. 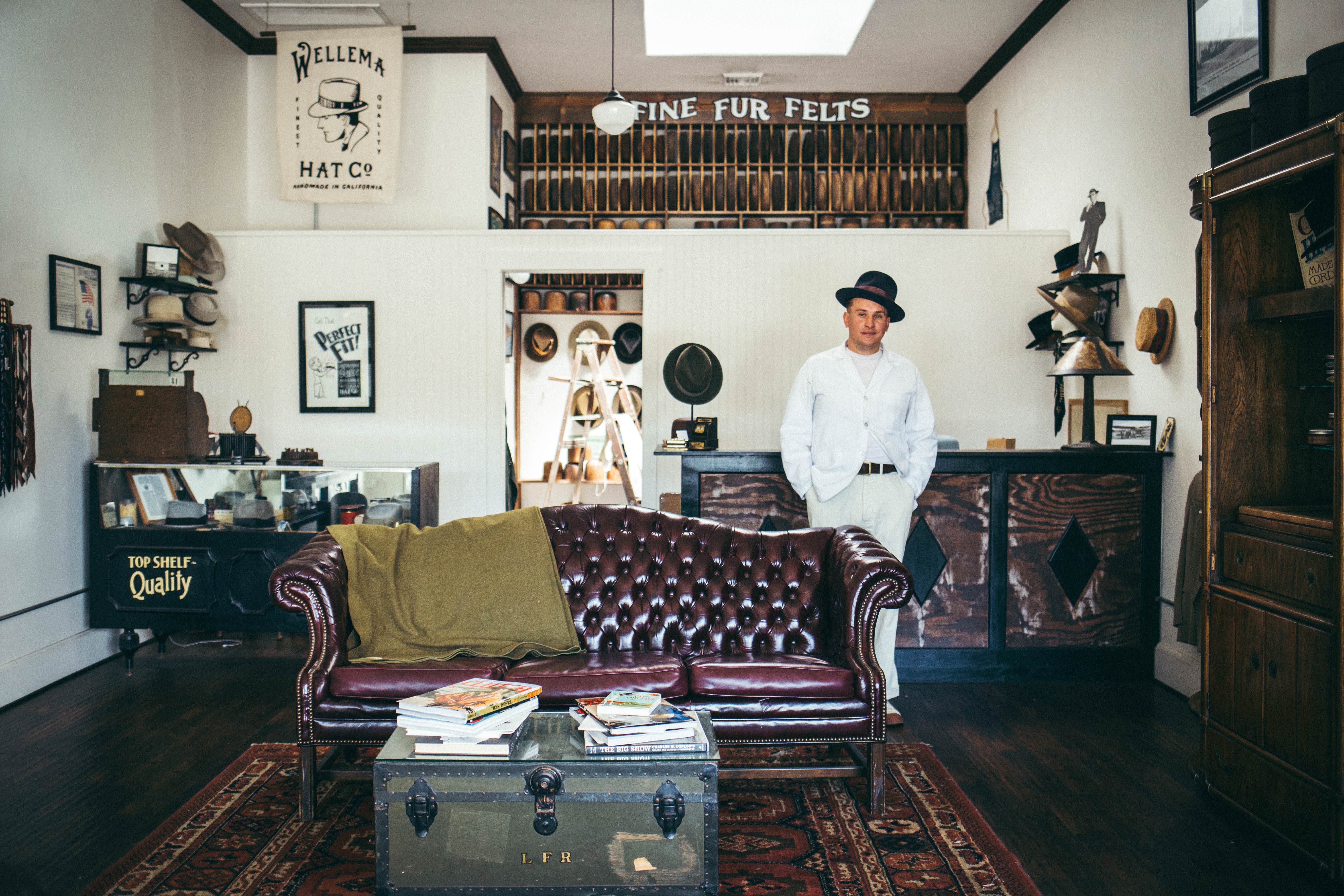 Tucked away on Mariposa and Lake (in Pasadena), lies the Wellema Hat Co.  An open space with wooden walls and flooring (a gorgeous contrast of white and dark brown), it really feels like an old school haberdashery.  An burgundy leather couch greets you right when you walk in the door, with an old case serving as a pseudo-coffee table, displaying different menswear books (Japanese preferred).  Hats are on display at all times, whether it’s on the left table (which goes over the record player) or the tall cabinet, housing a multitude of different hat models.  A huge collection of vintage hat blocks adorn the back wall. 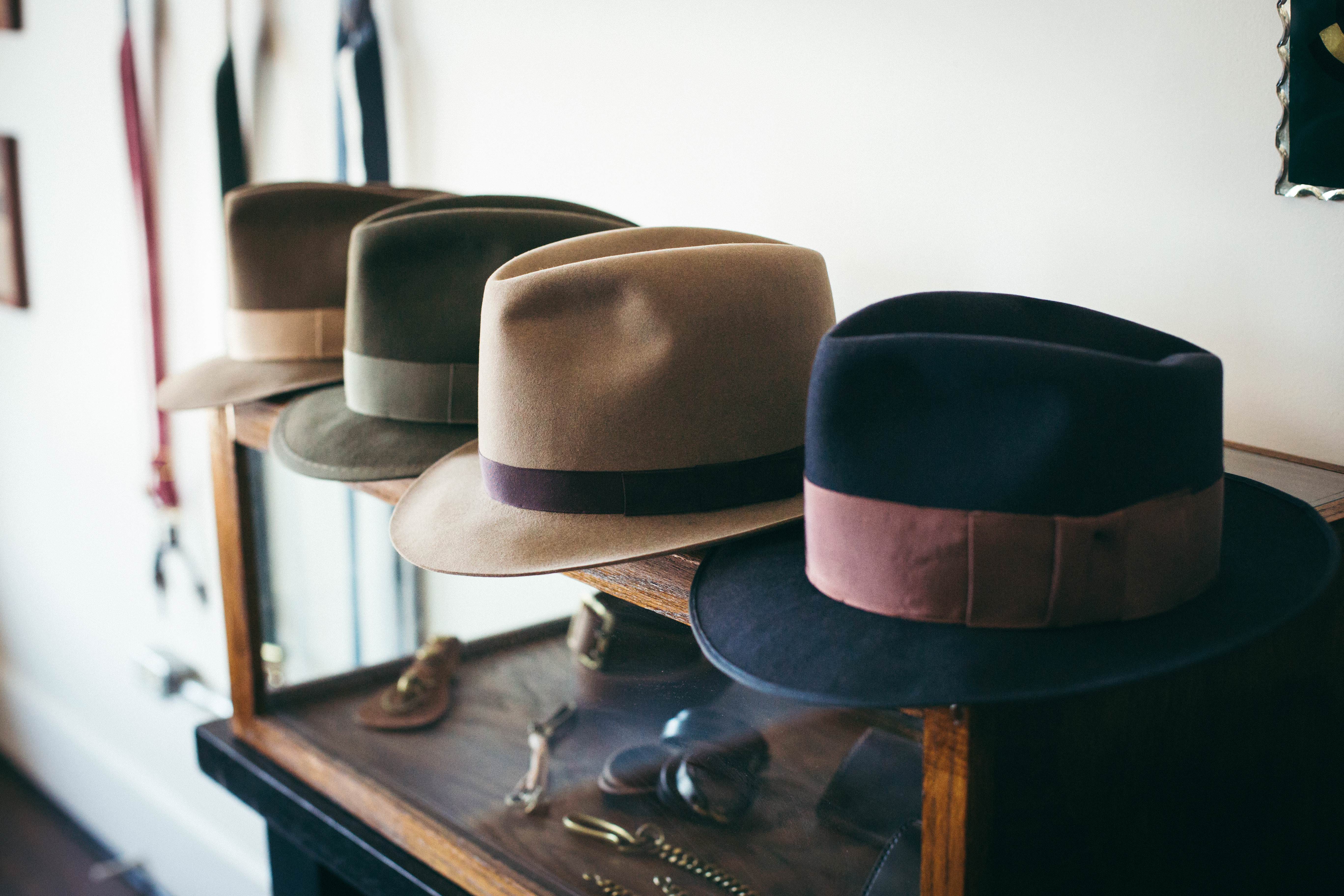 Now Cody offers a true bespoke service.  He takes measurements of your head and you can always try some of his RTW pieces to see which ones fit most comfortably; if you’re local, you can always do some fittings as the hat comes together.  Clients hold the main design power and they decide the not only the felt and ribbon color but also the shape, crown height, and brim length (among other things).  Cody has a wealth of experience and only serves as a guide if the client needs it; more often than not, clients already have a general idea of how they want their fedora to look.

Even though Cody can do full replicas of true vintage fedora styles (each era has specific hat dimensions), there is no “house model” for the Wellema Hat Co.  Every hat makes is different and is entirely up to the taste of the client. 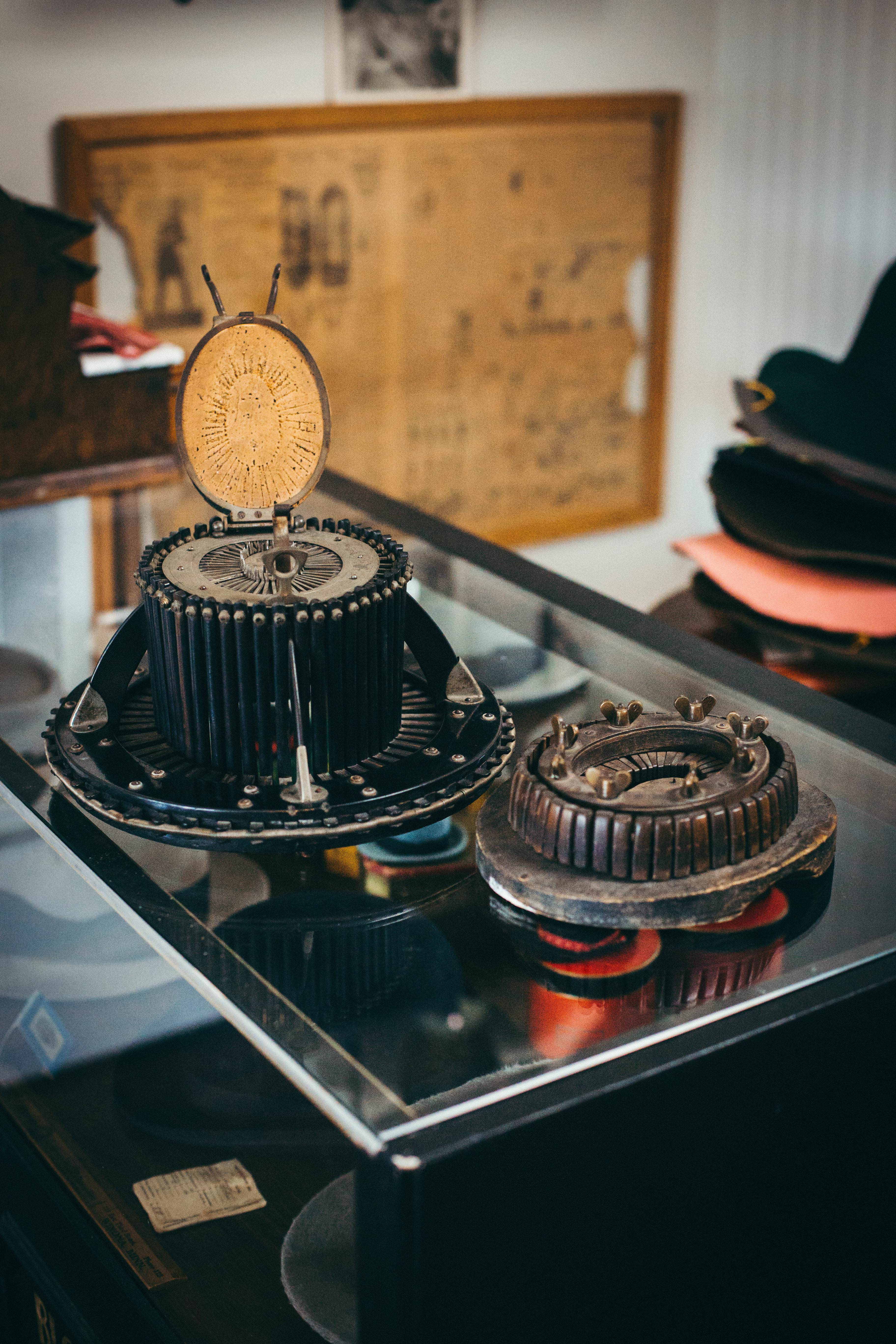 One of the best ways that Cody gets a true fit is by letting clients try on the Conformateur and the Formillion.  The Conformateur goes on your head like a hat and the “needles” expand with the exact head shape.  A card gets pressed at the top of the device and creates a template of the client’s head which is then placed into the Formillion, which expands to be a the full size of the client’s measurements.  The formillion can then be placed into the hat and sweatband to ensure that it takes the most accurate shape.

It’s a really old device, but that’s what makes it a true bespoke fit! 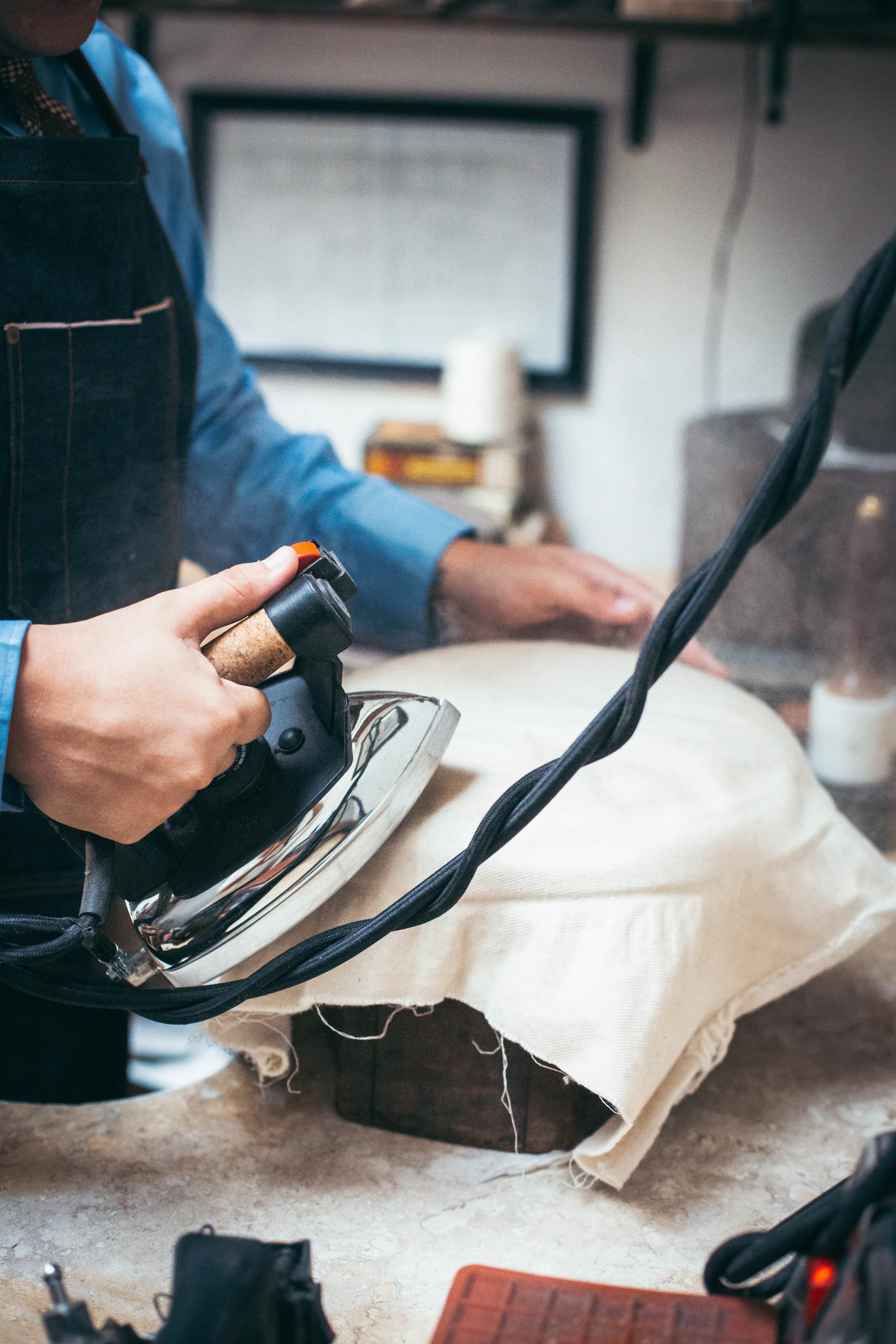 Learning everything about hat making on his own, Cody first started crafting his wares out of his apartment in Santa Barbara.  He’s finally returned to SoCal after a few years and has settled in Pasadena, only an  hour drive from his original home in Orange County.  His shop has now been open for almost two years and serves as not only his private workspace, but has even come to host great events.

Cody does handle some of the business with his wife Shelby, but while he does have an apprentice (the supremely stylish Akira), a majority of the work is still done by him.  The only machines are the iron and the hatband stamp; everything else is done by hand. 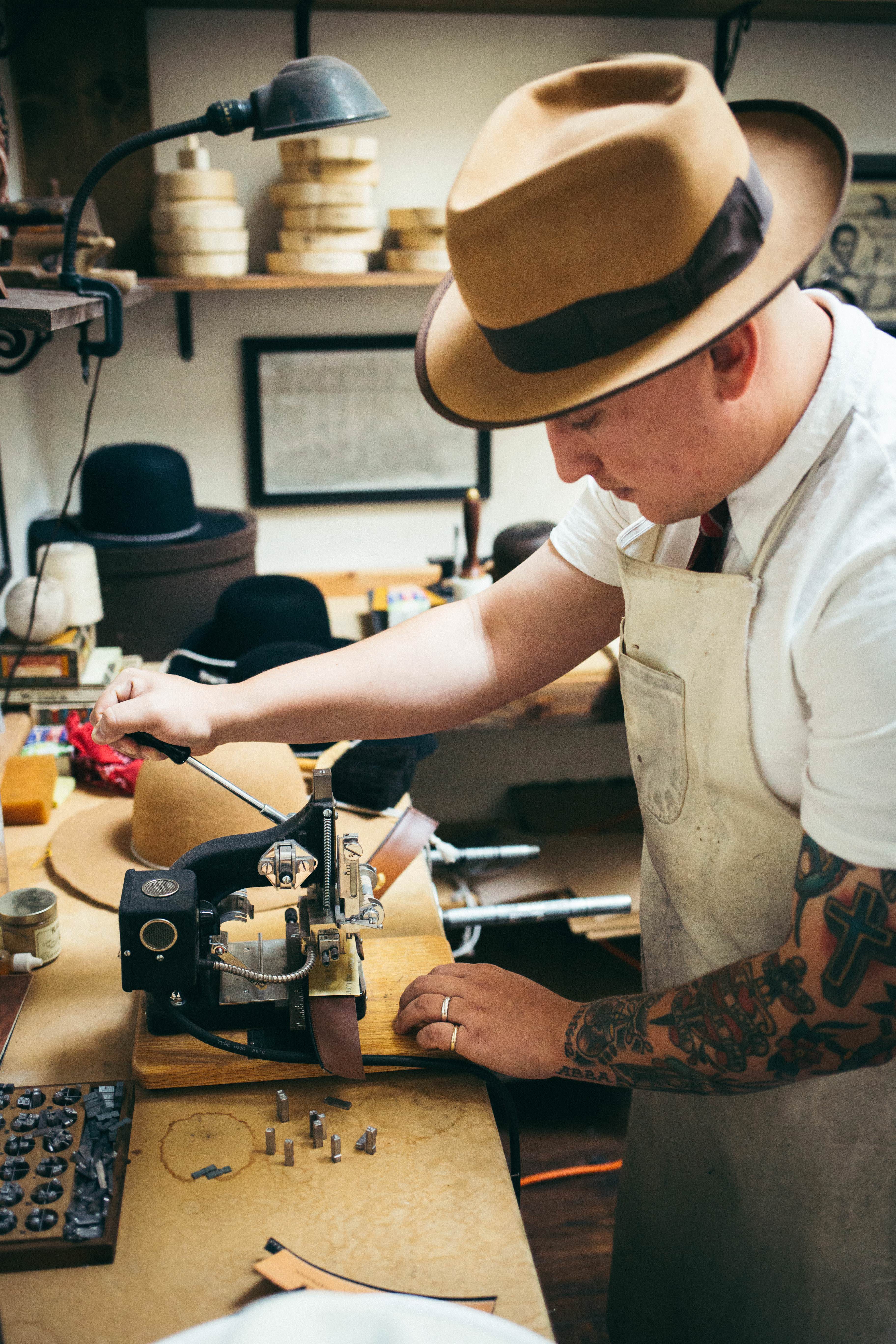 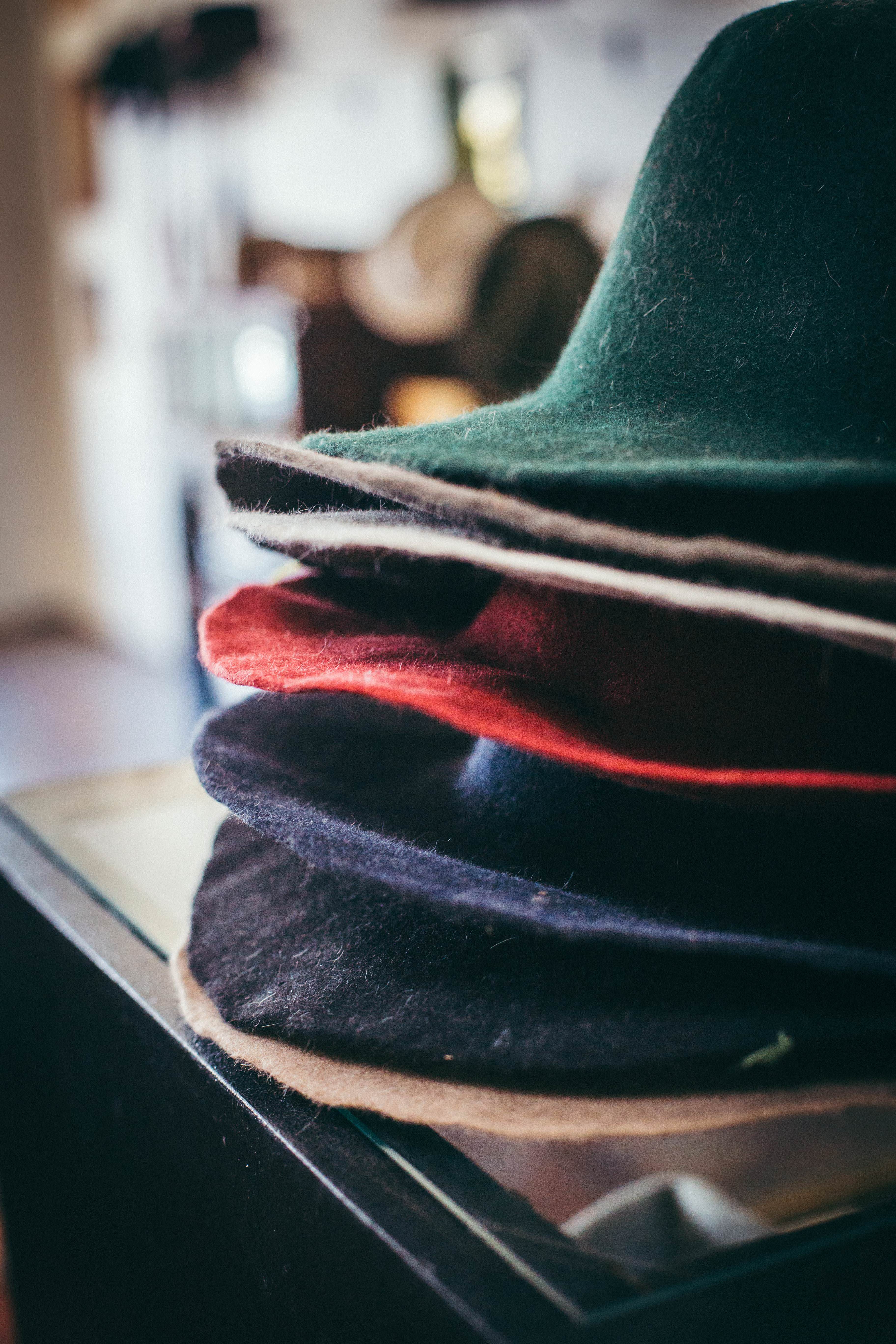 Like any hatter, Cody sources felts in a lot of different colors and finishes.  Starting at $300-350 (for both RTW and Bespoke, as the processes are identical), you can get a European Hare (rabbit) felt fedora.  Beaver is the most common, but the most premium materials are the Mink + Beaver blend.  In conjunction with the customer, the hats can be separated by Dress Weight and Western Weight, where the former is obviously lighter than the latter. Extras can include bound edges, extra long brims, ventilation (punched holes under the ribbon), and 20s-30s nickel pins.  You can really customize it anyway you want. 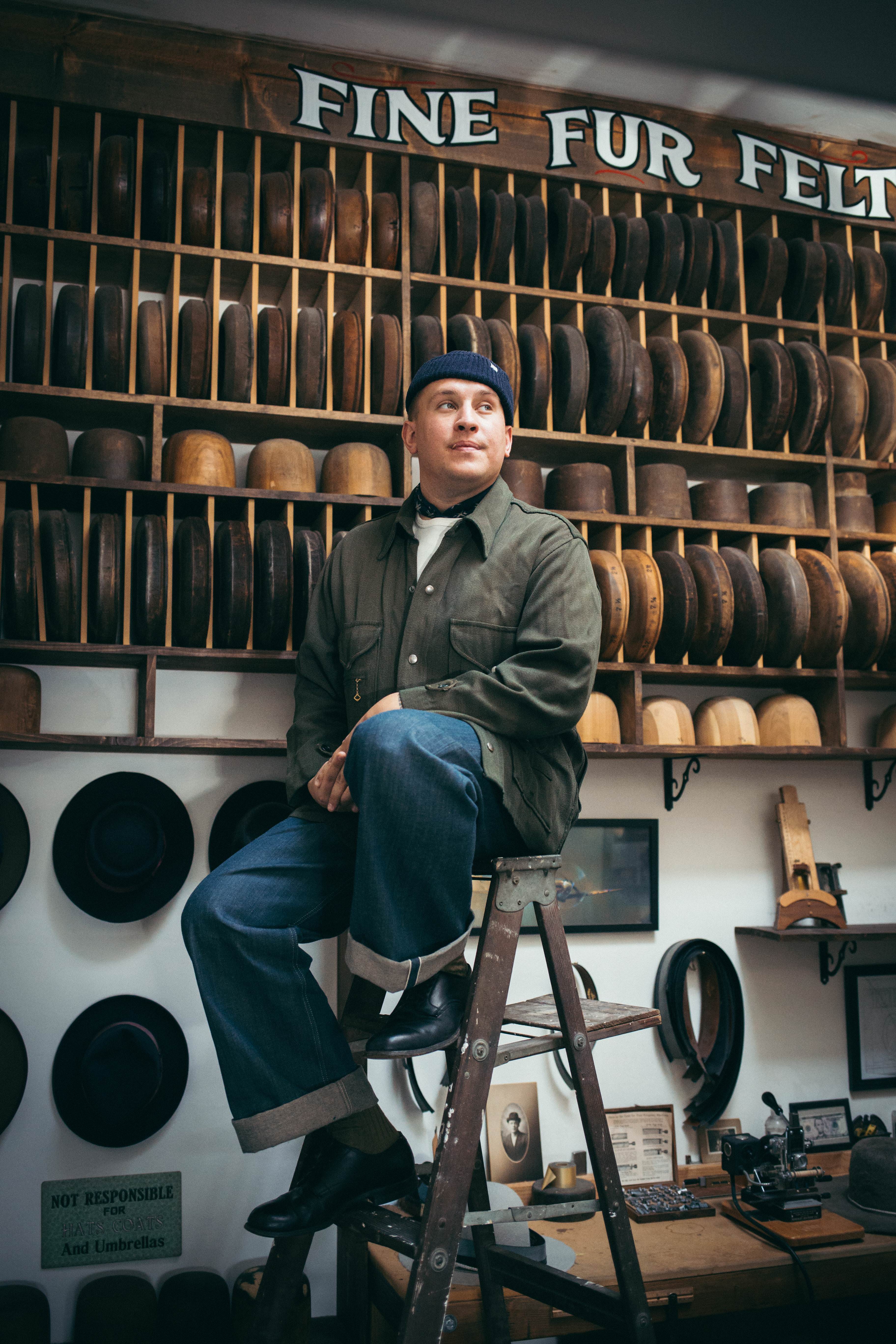 Cody and his collection of hat blocks. 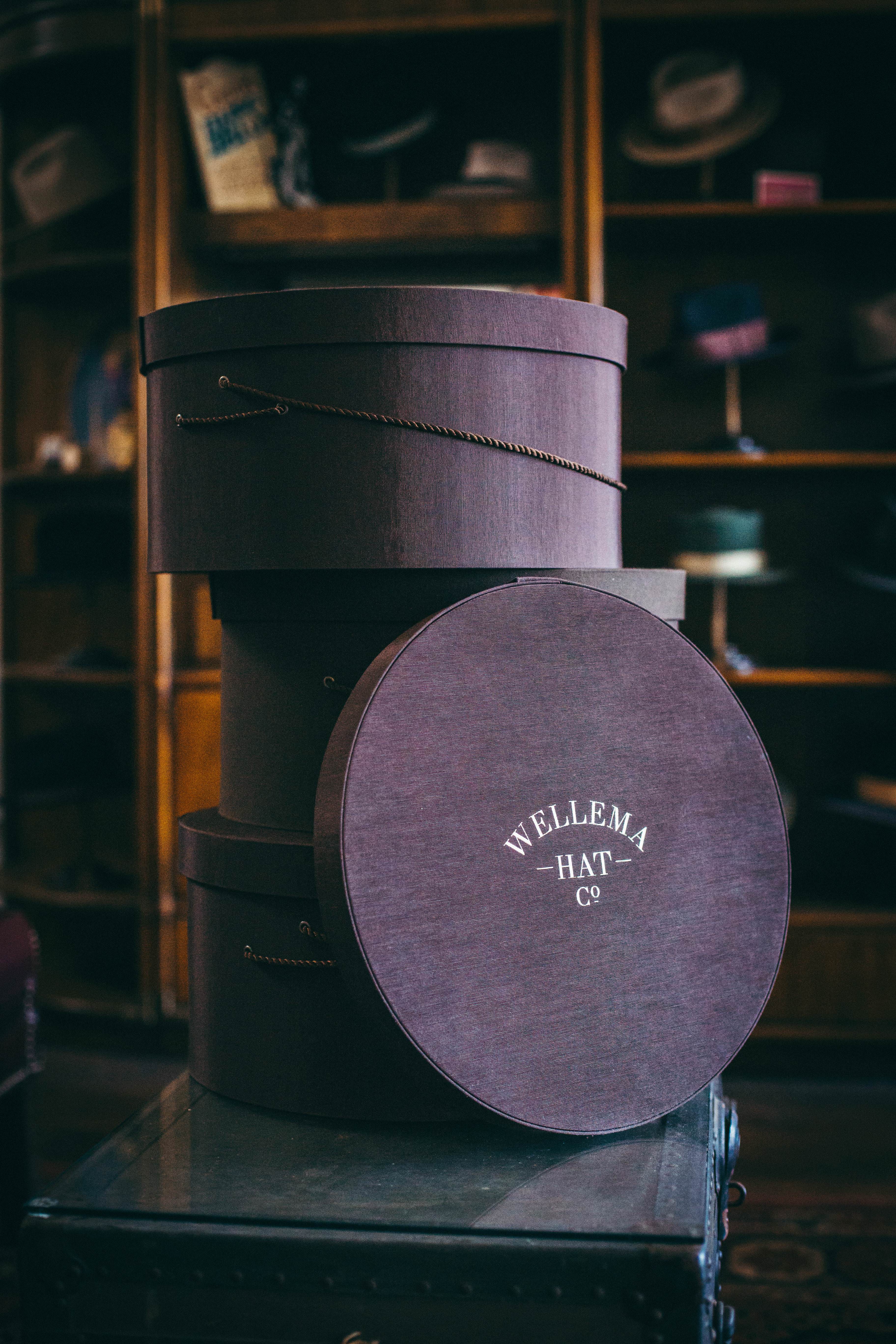 Beautiful hat boxes, the only way to travel.

The Wellema Hat Co. really serves a bunch of different clients.  Cody has made hats not only for celebrities and menswear enthusiasts, but just regular guys in the neighborhood.  More often than not, it’s a guy who has a slight interest in some form of menswear and wants a vintage styled hat.  Other times it’s recreating their father or grandfather’s hat.

Being bespoke, Cody can even make really weird adjustments to the hat.  He can do some crazy crown treatments, frayed ribbon edges, or even put a headstart on the distressing. It’s not something he really likes (I think we all prefer to wear in our hats on our own) but it does come up. 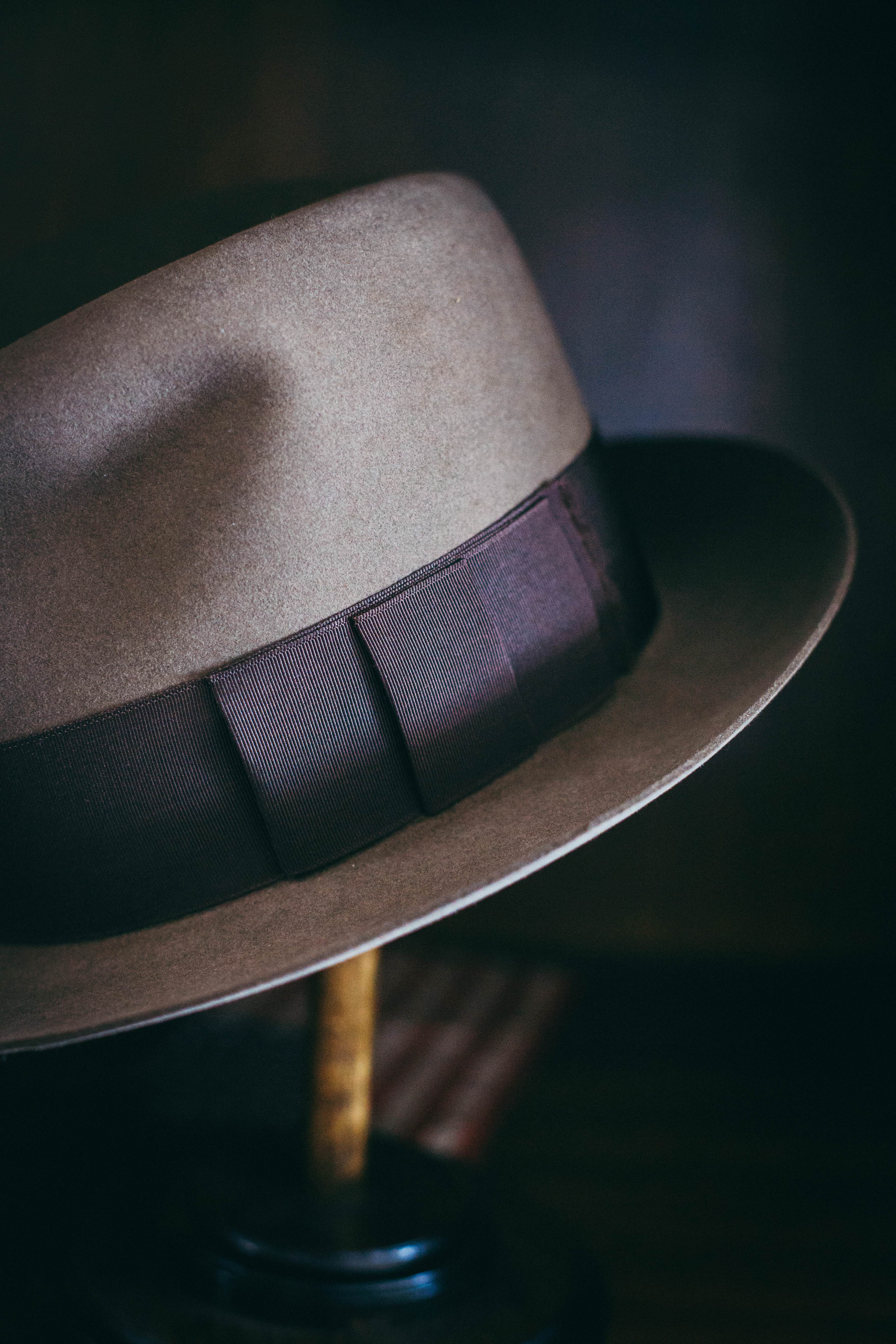 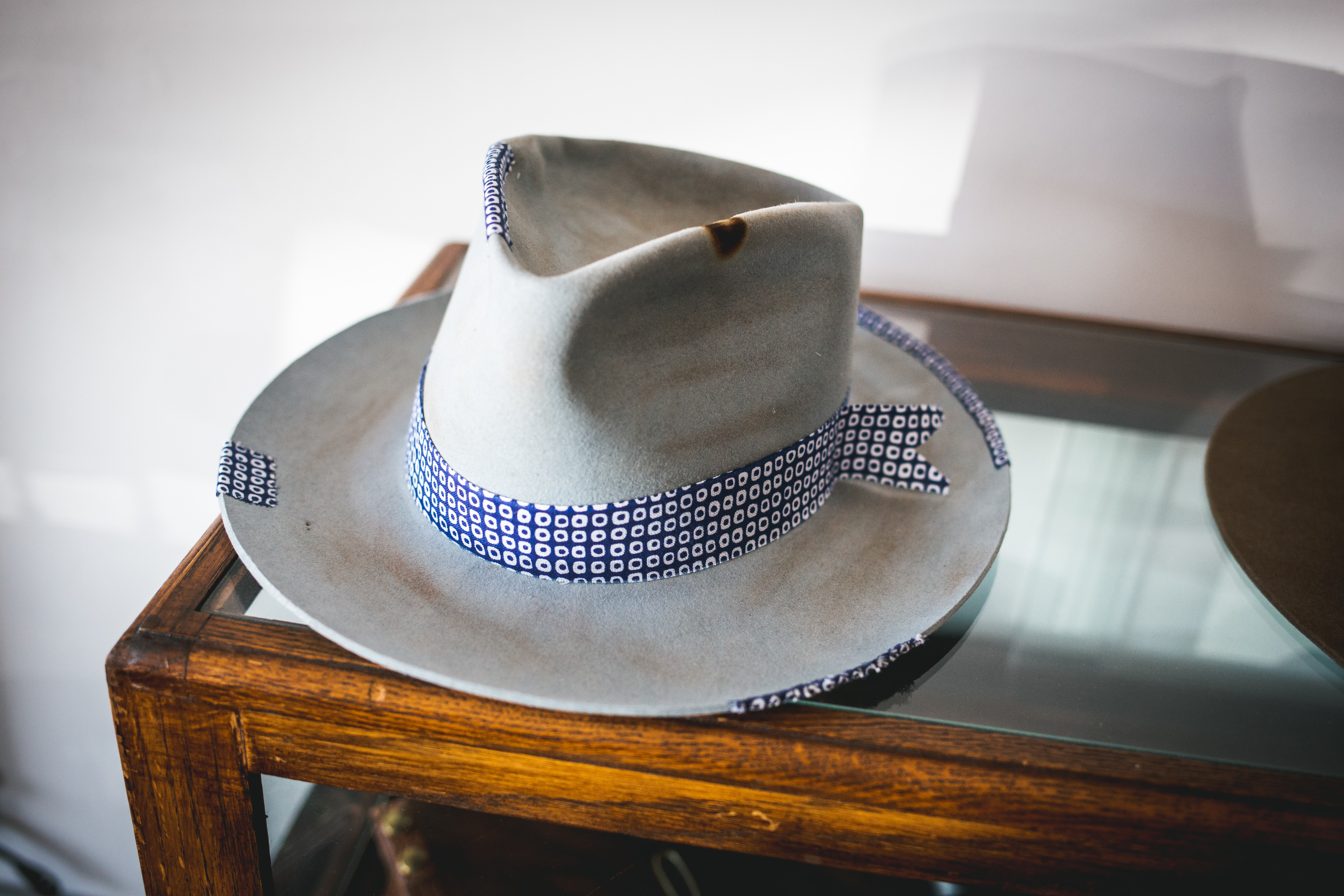 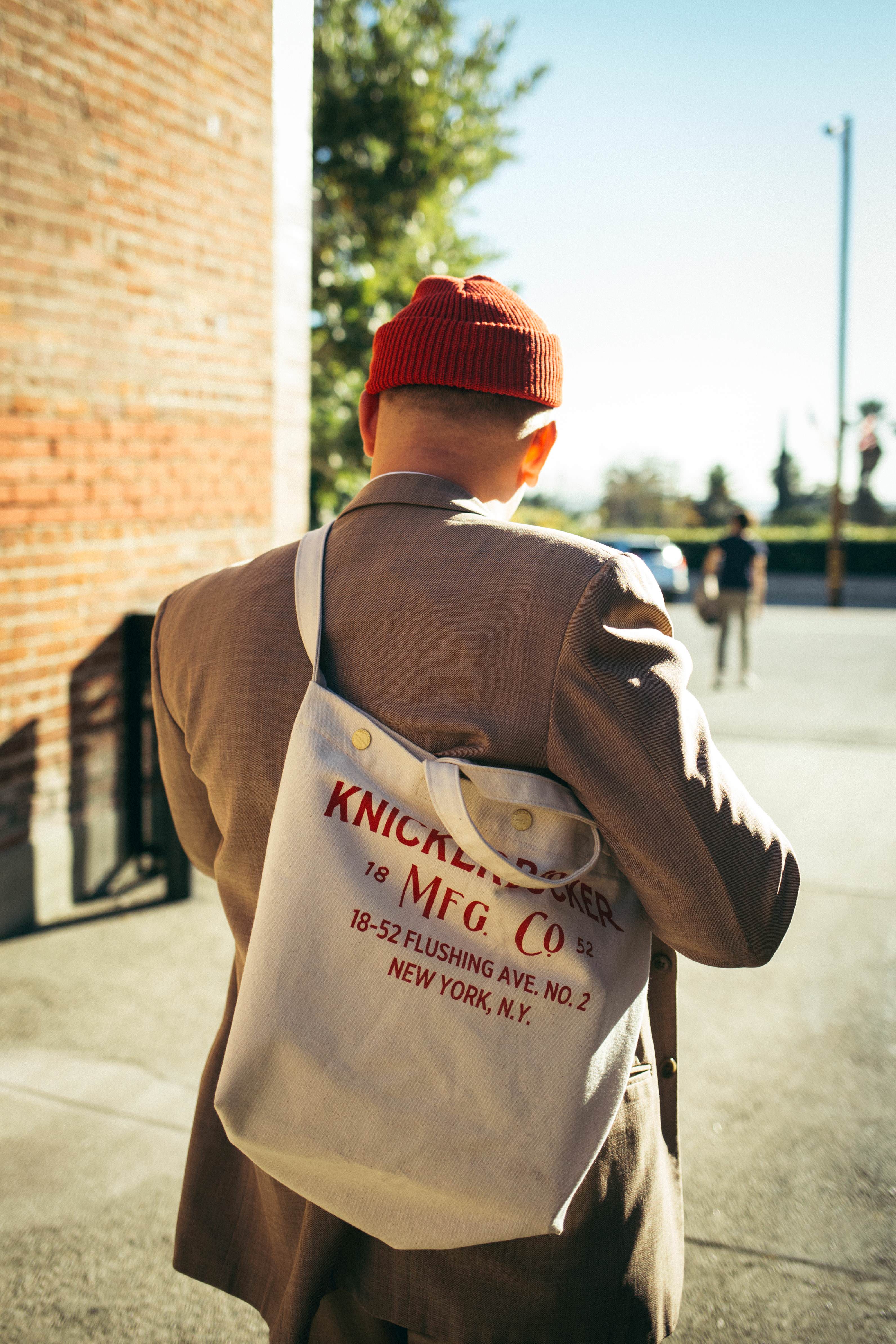 Even though Cody’s shop exists to sell hats, he’s never wanted that to be the end all.  Through his own style journey, he’s come across some great artisanal brands that he now stocks in his store; a small collection of vintage ties are also available for purchase.   These partner brands aren’t that focused on vintage but fall within Cody’s ethos and theme.  Recently, he stocked a bunch of knit caps from Knickerbocker that I have just loved.  Beautiful umbrellas from Lockwood (an English brand), caps from our friend Damian, and a singular linen baseball shirt from COATZ are also in the store.  Some of these brands have made Cody personal items, which then turns into a legitimate business relationship. 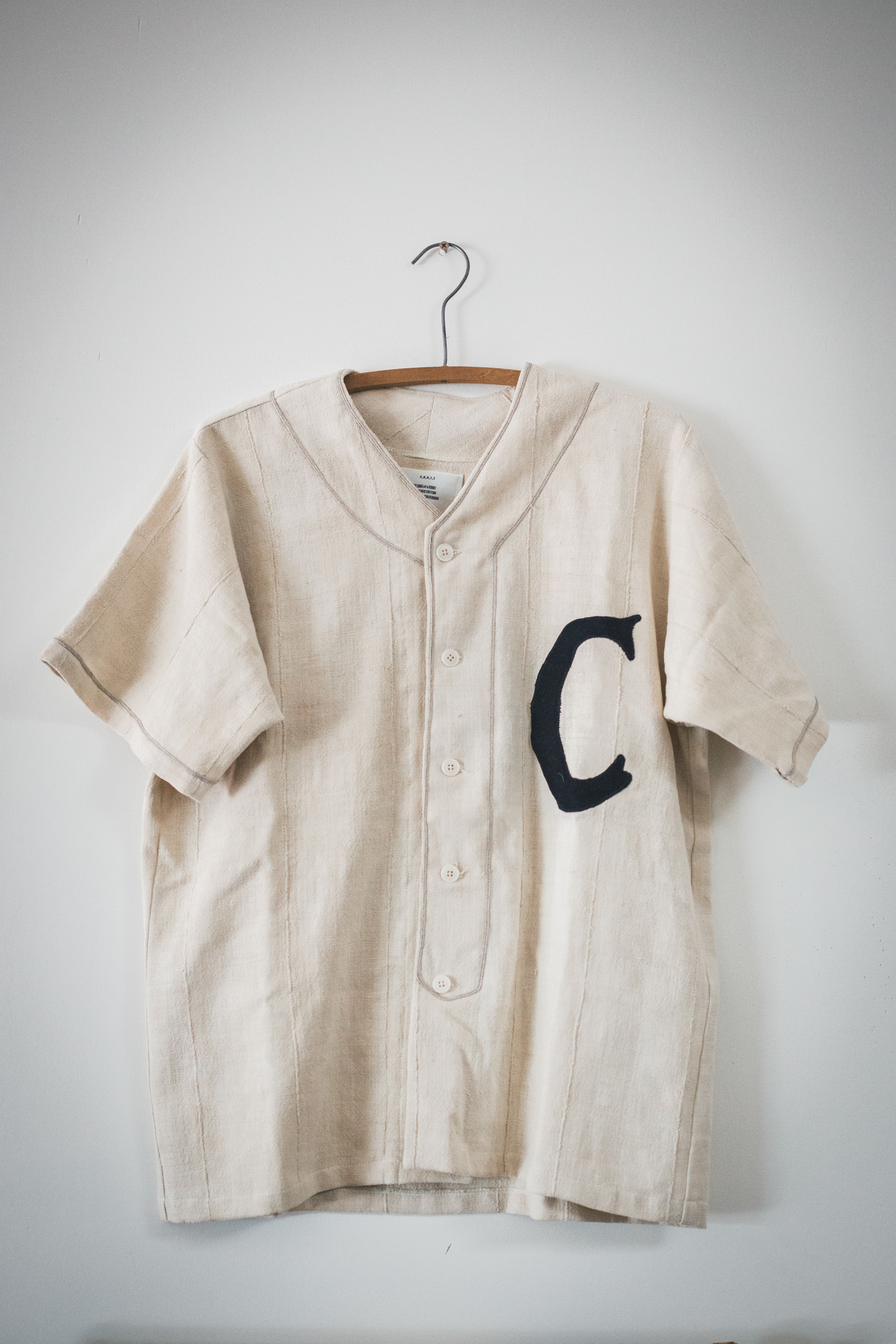 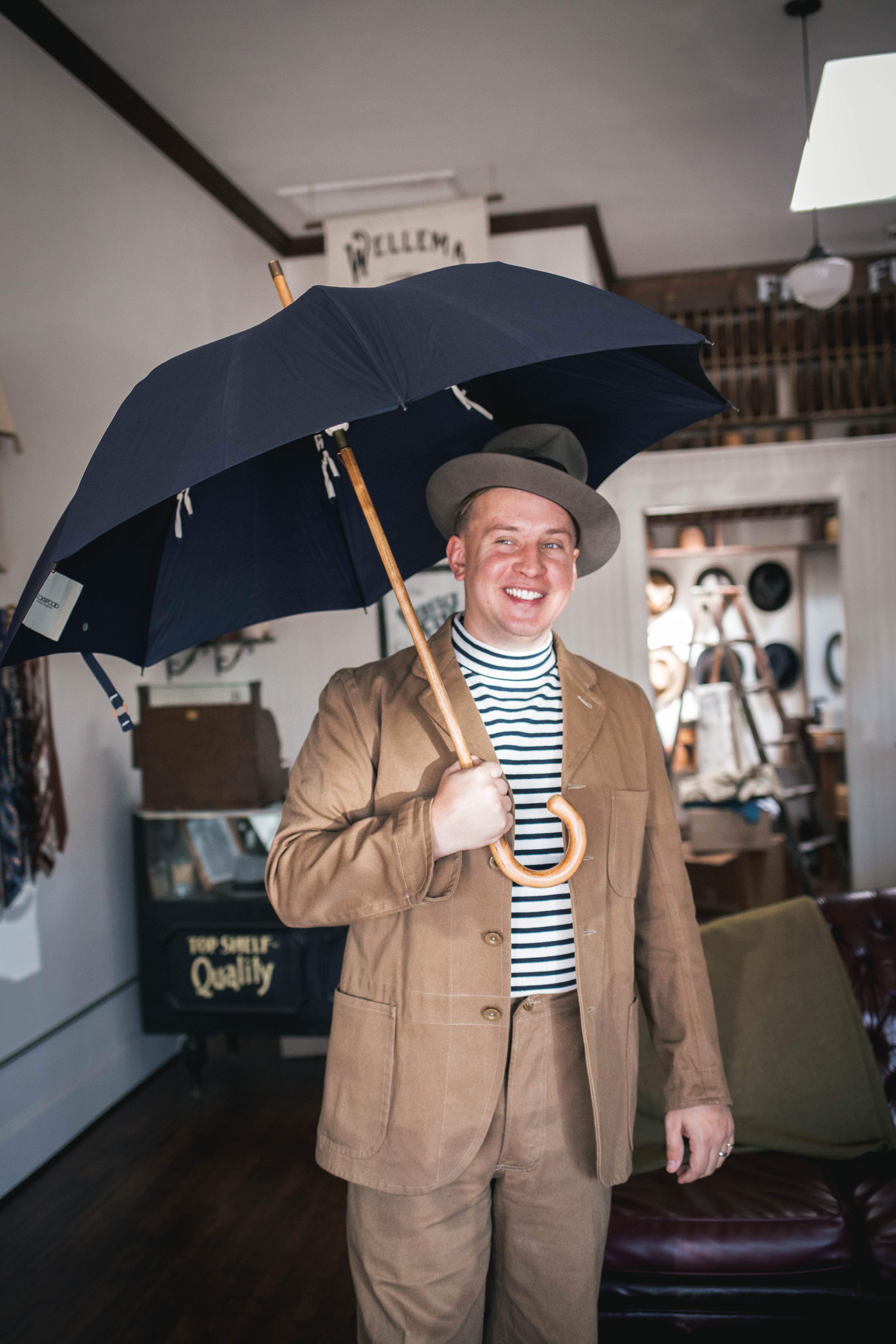 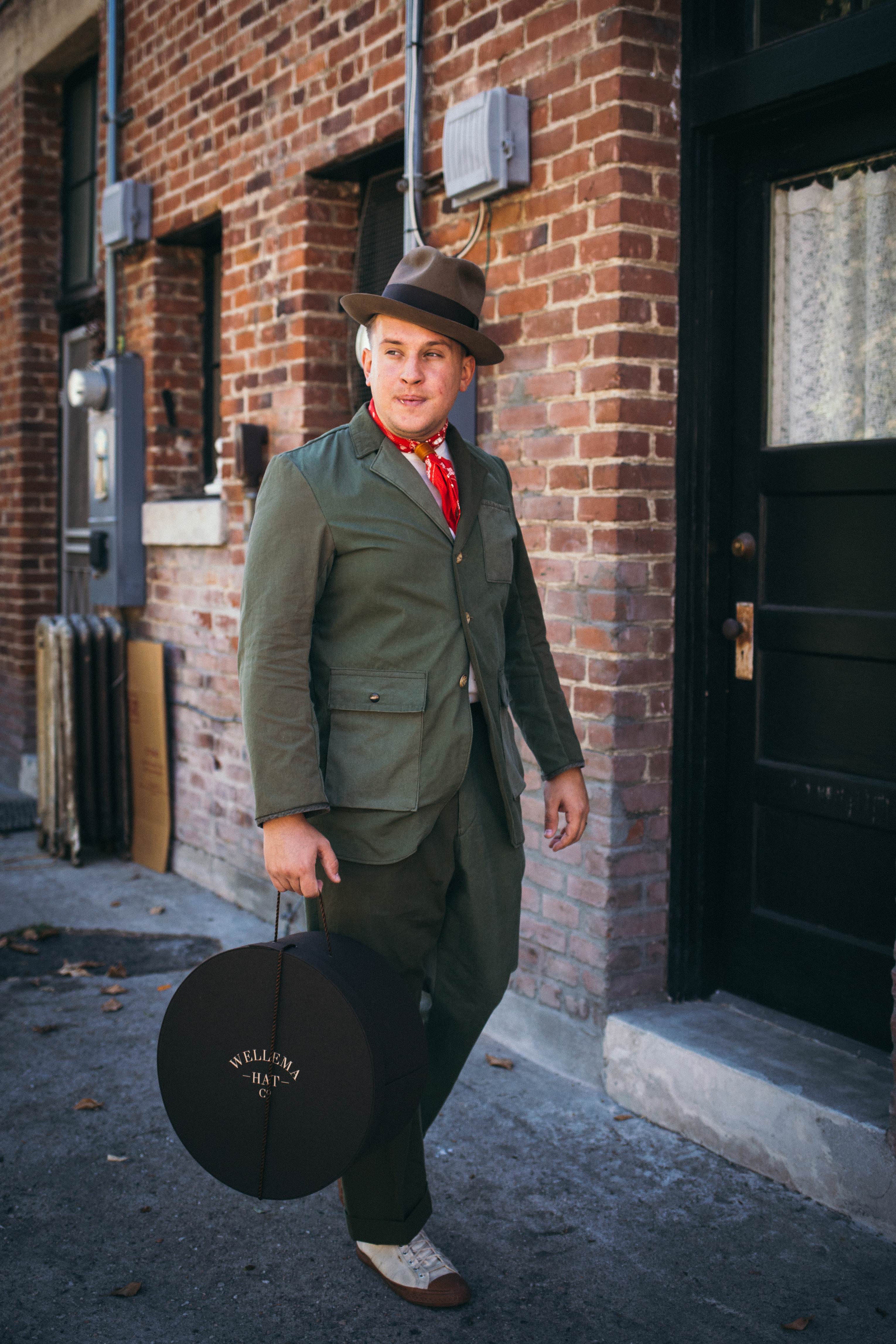 A canvas suit made by Clutch Golf. 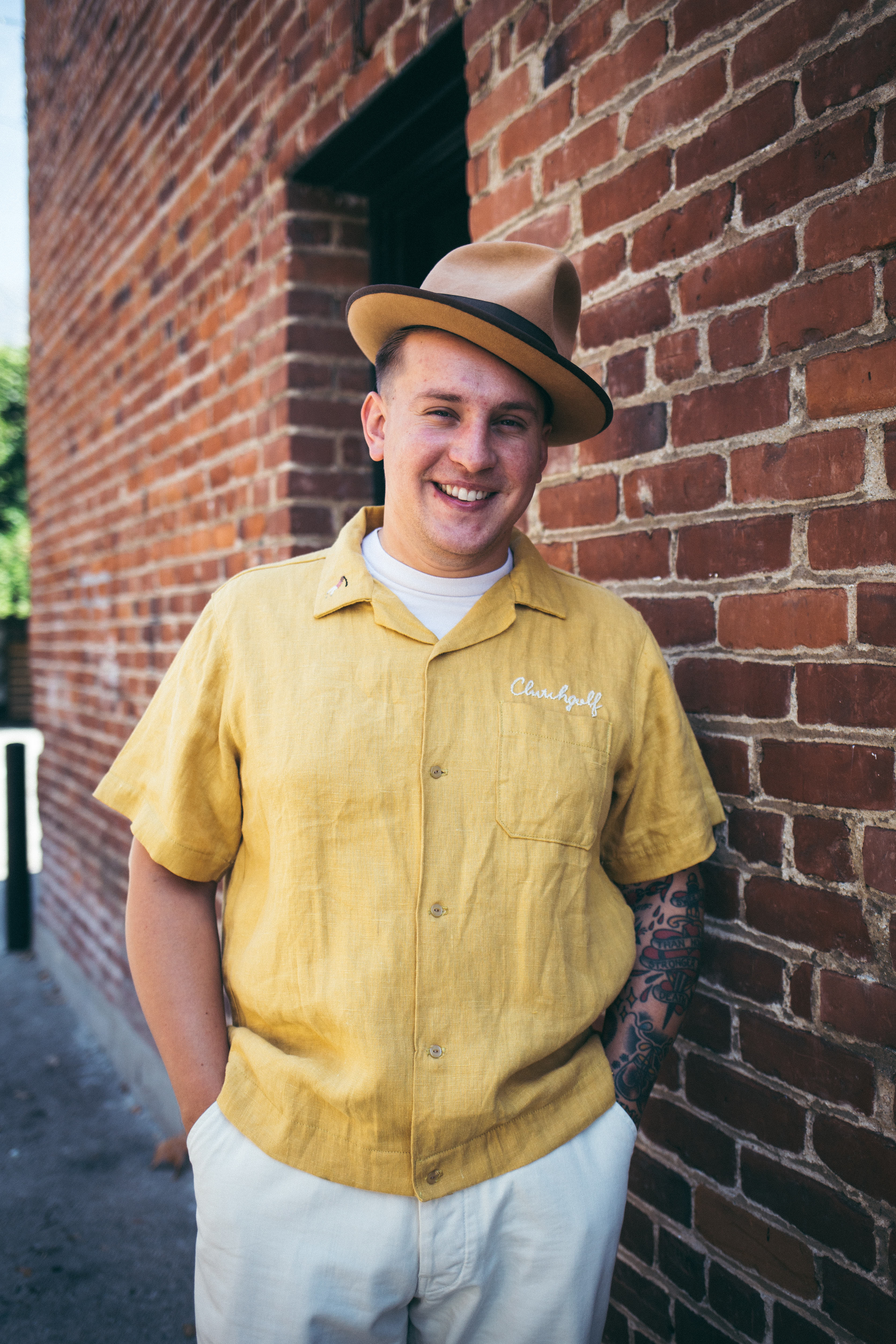 Cody is also a man with great style.  We talked about this on the podcast, but Cody started out much like Spencer and I; we were vintage purists.  As the brand developed, so did his style which came to a head when Cody realized that he wasn’t being true to himself.  He didn’t want to be carbon copy of the 1930s-1940s.   This, along with the fact that the vintage community didn’t really buy his hats (they preferred true vintage over newly made pieces), really pushed Cody to find out what his own style was.

If I could describe his style, I would say it’s a more Japanese-Americana workwear interpretation of my own.  One day he’ll be wearing a full vintage suit with a Brycelands x Ascot Chang OCBD and a vintage tie and the next he’ll be in a sportshirt, vintage chinos with 2120 loafers.  He no longer feels constricted to what “they wore back then”. Sure it might have some vintage roots and styling, but it’s done the way that he wants. 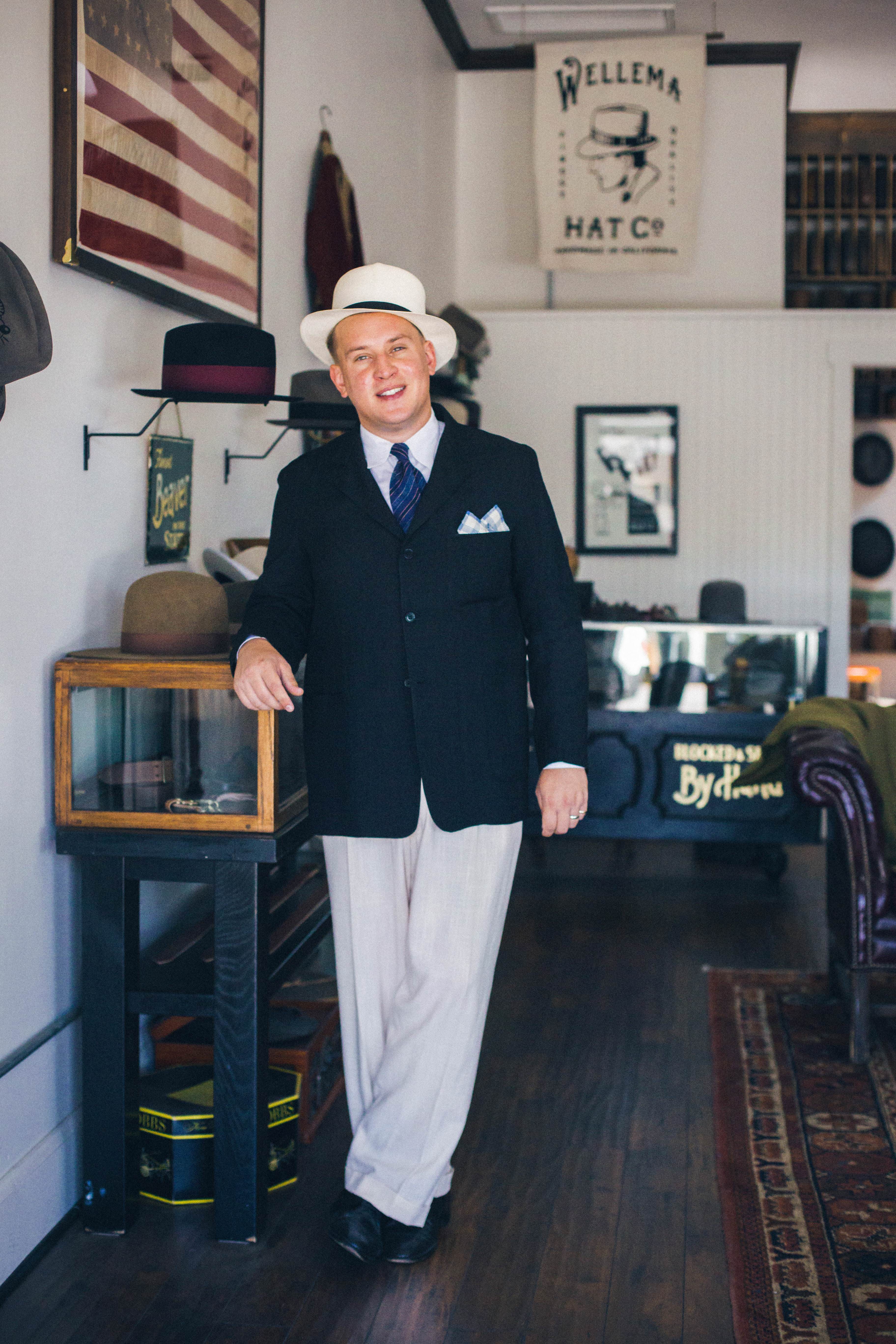 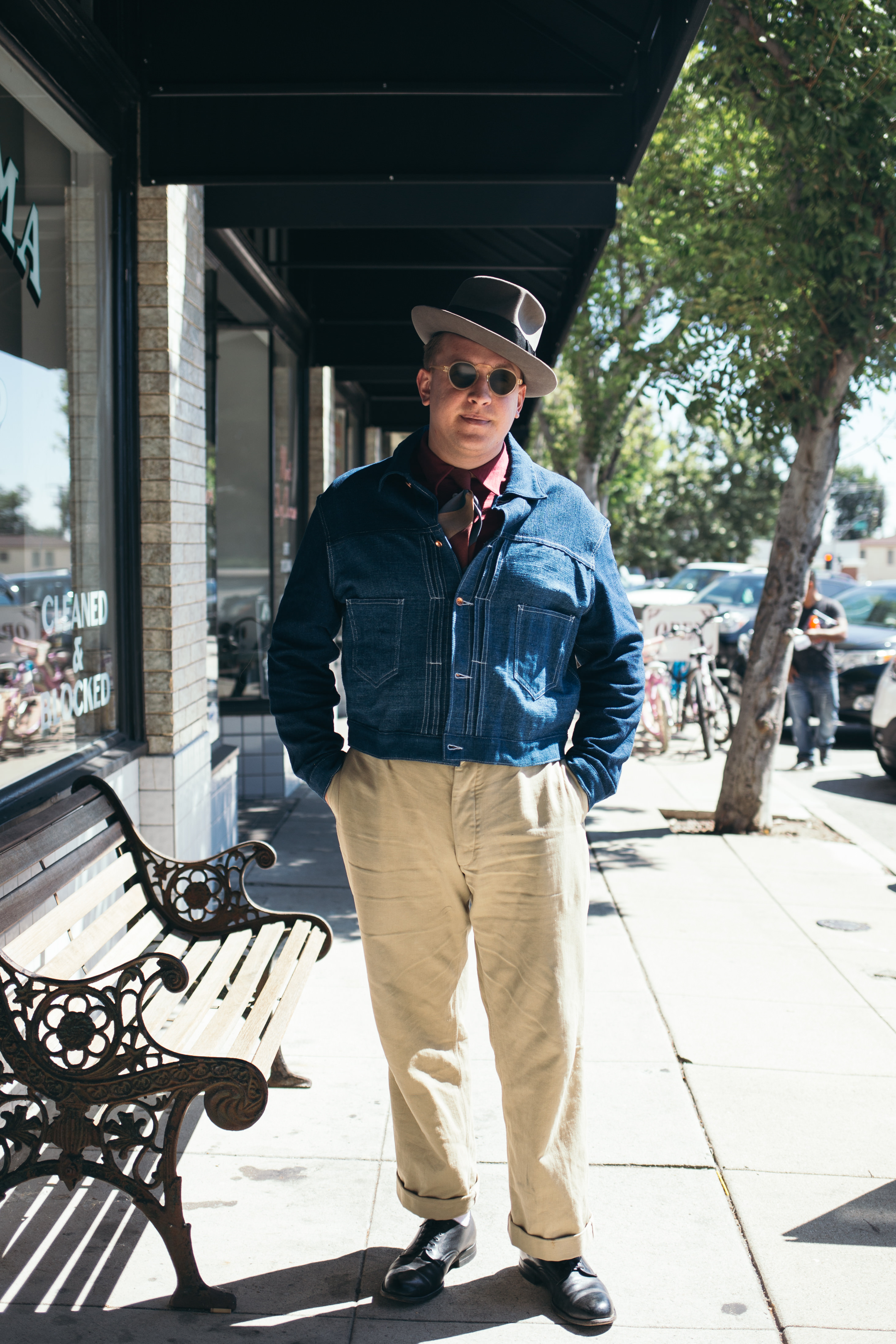 What a badass denim jacket. 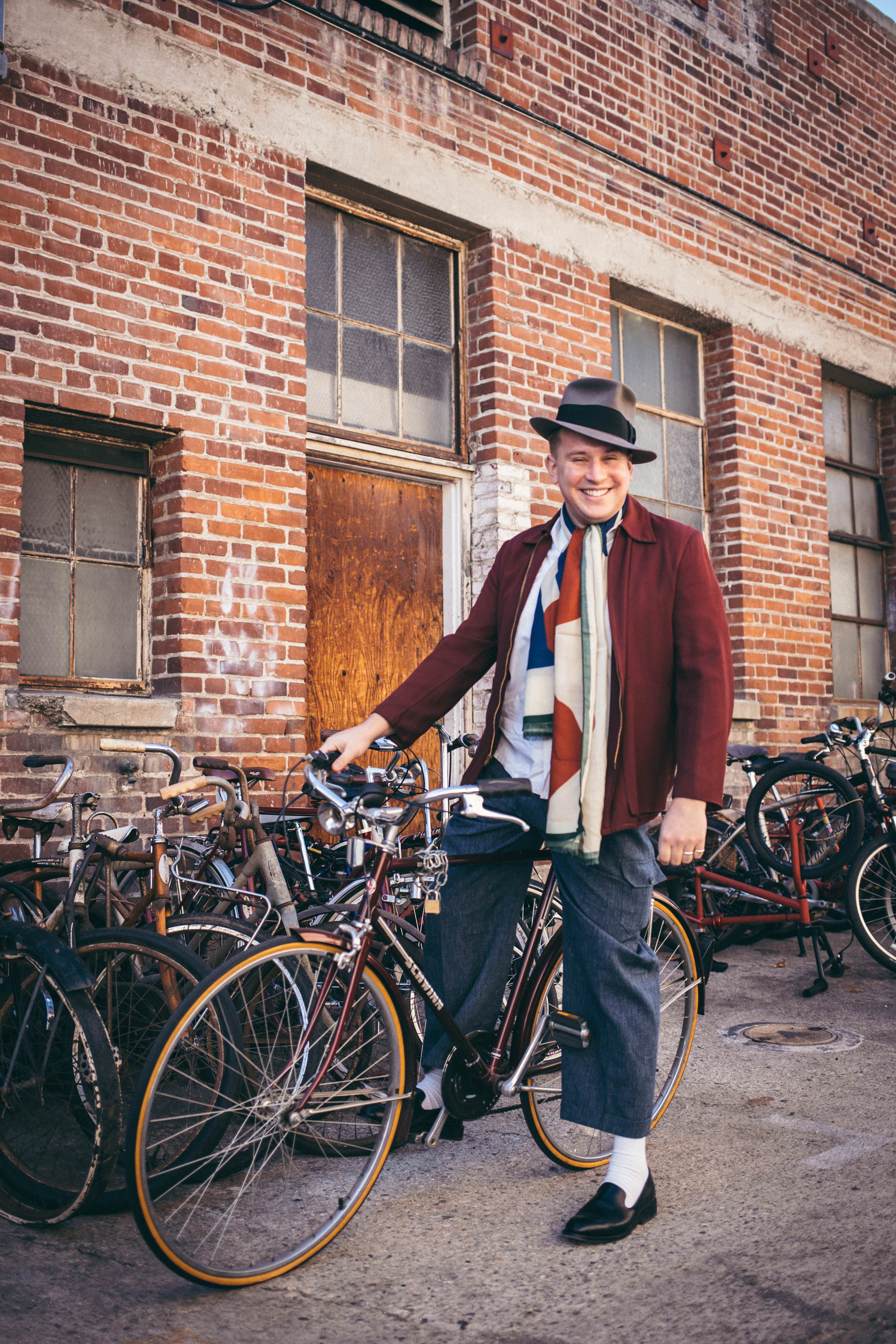 He actually wore this when we did the podcast! 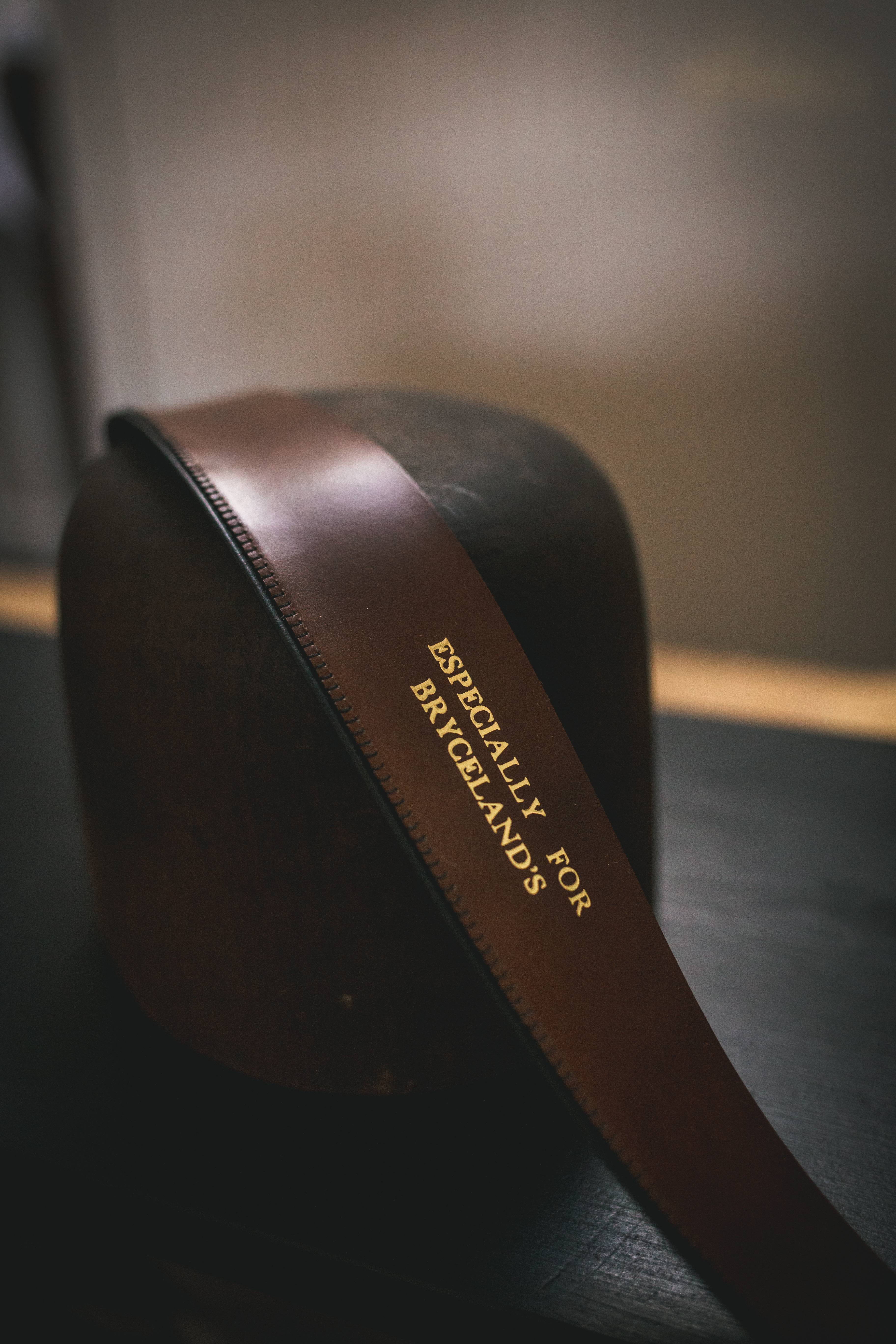 One of the most exciting things that Cody has been doing is a collaboration with Brycelands Co., the menswear shop founded by Kenji Cheung and Ethan Newton.  If you follow me closely, you’ll know that Brycelands really has replaced the Armoury as my current obsession.  Their suiting is contemporary, but they style it and pairt with vintage pieces that really appeals to both Cody and me.   Apparently Cody and Brycelands have been following each other for awhile and they eventually struck a deal to do some limited sizes of hats for their newly opened Hong Kong location.   The first model is a western Silverbelly hat, made to evoke the vintage stetsons of the 1940’s. The second is called the Bogart, aptly named for fedora worn by Bogey in the Maltese Falcon. 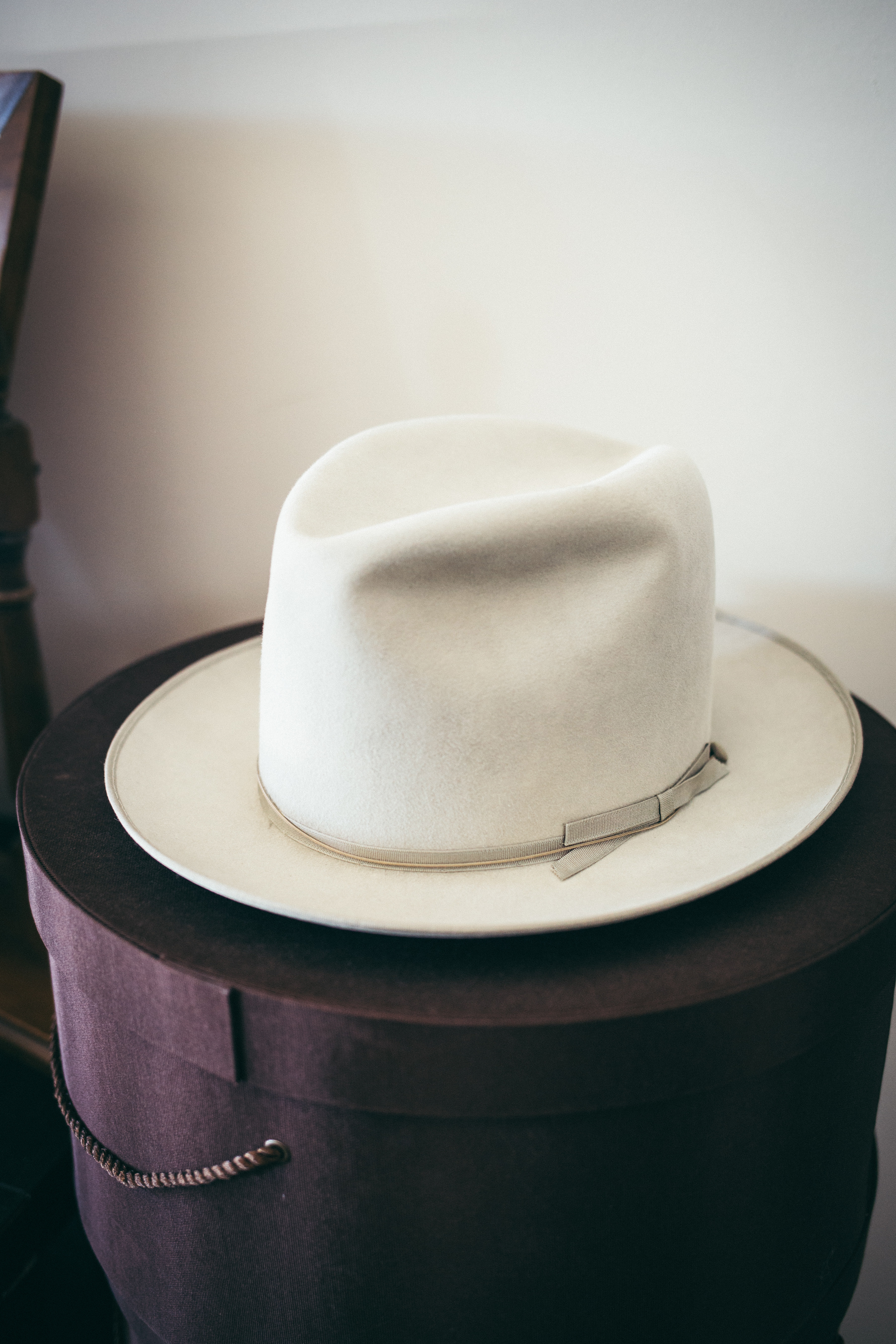 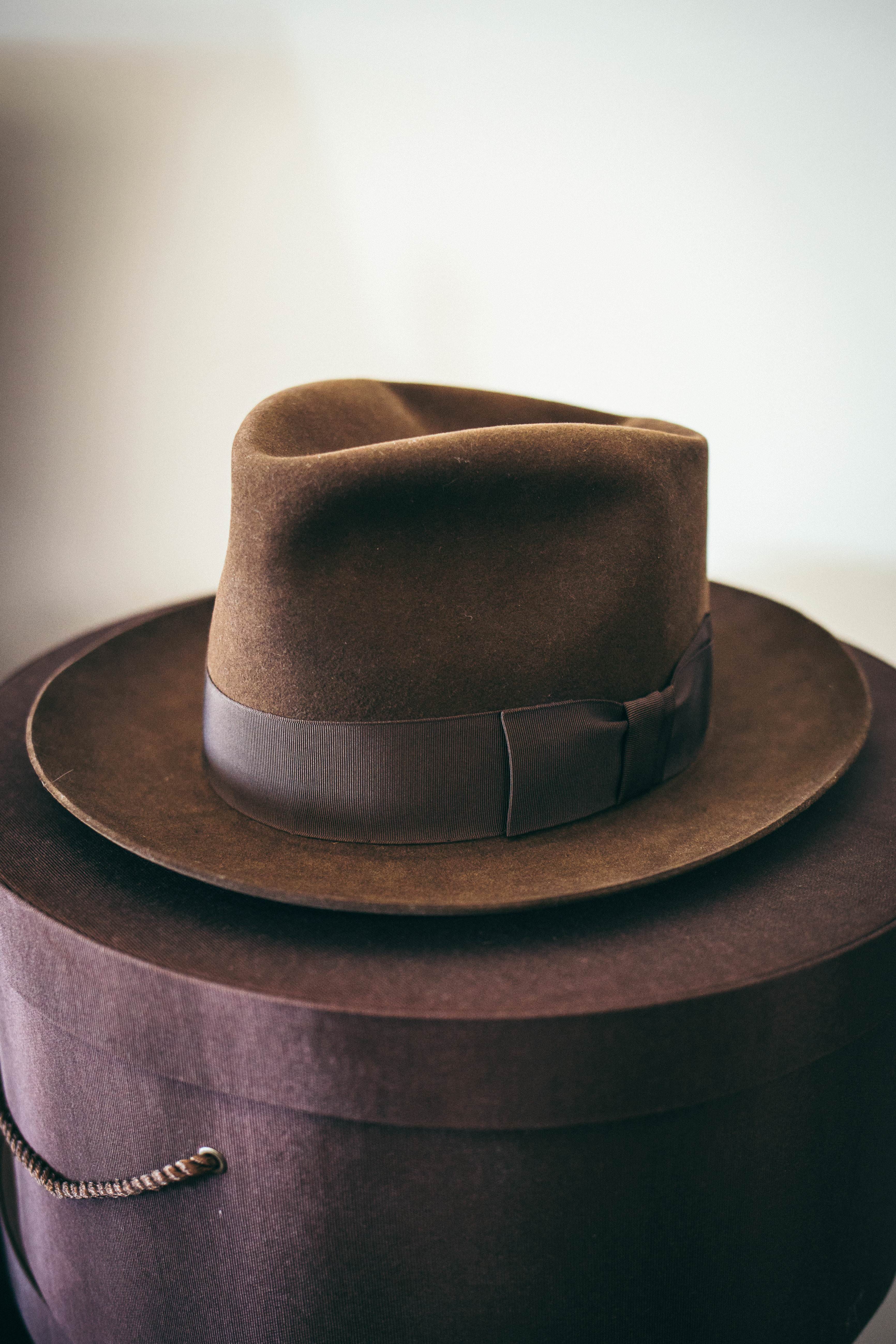 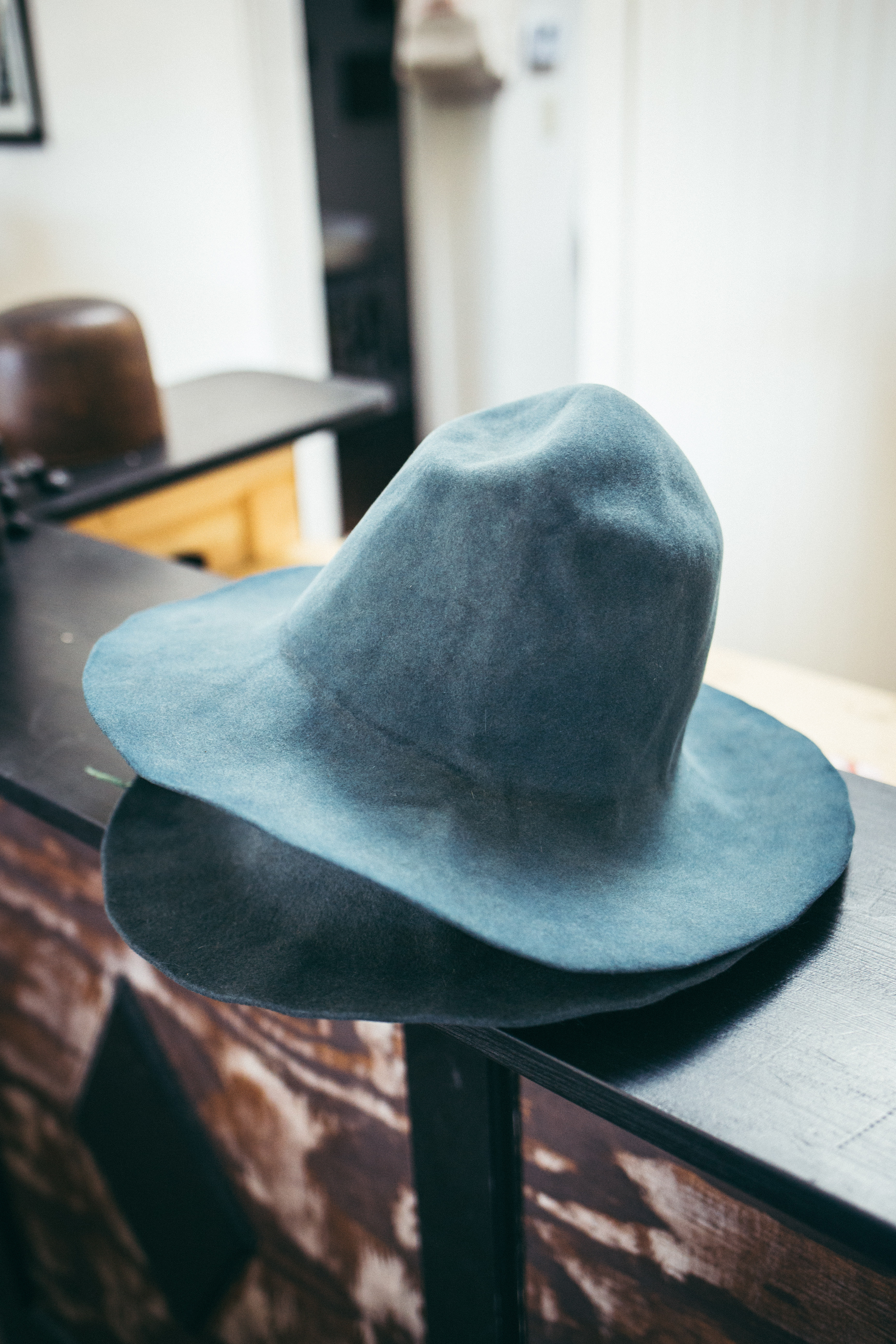 Cody is always looking to improve and grow his business.  Apart from doing wholesale with Brycelands (which isn’t technically a true wholesale), his latest project is do develop indigo dyed fedoras and ribbons.  Not only is indigo a big thing among workwear enthusiasts, I just think it’s a cool element to bring to the fedora, which already has a stuffy (and nerdy) connotation.  We’ll see how it turns out, but I’m sure the final product will be amazing; of course the ultimate design will be up to the customer who chooses that material.  Perhaps I’ll grab one! 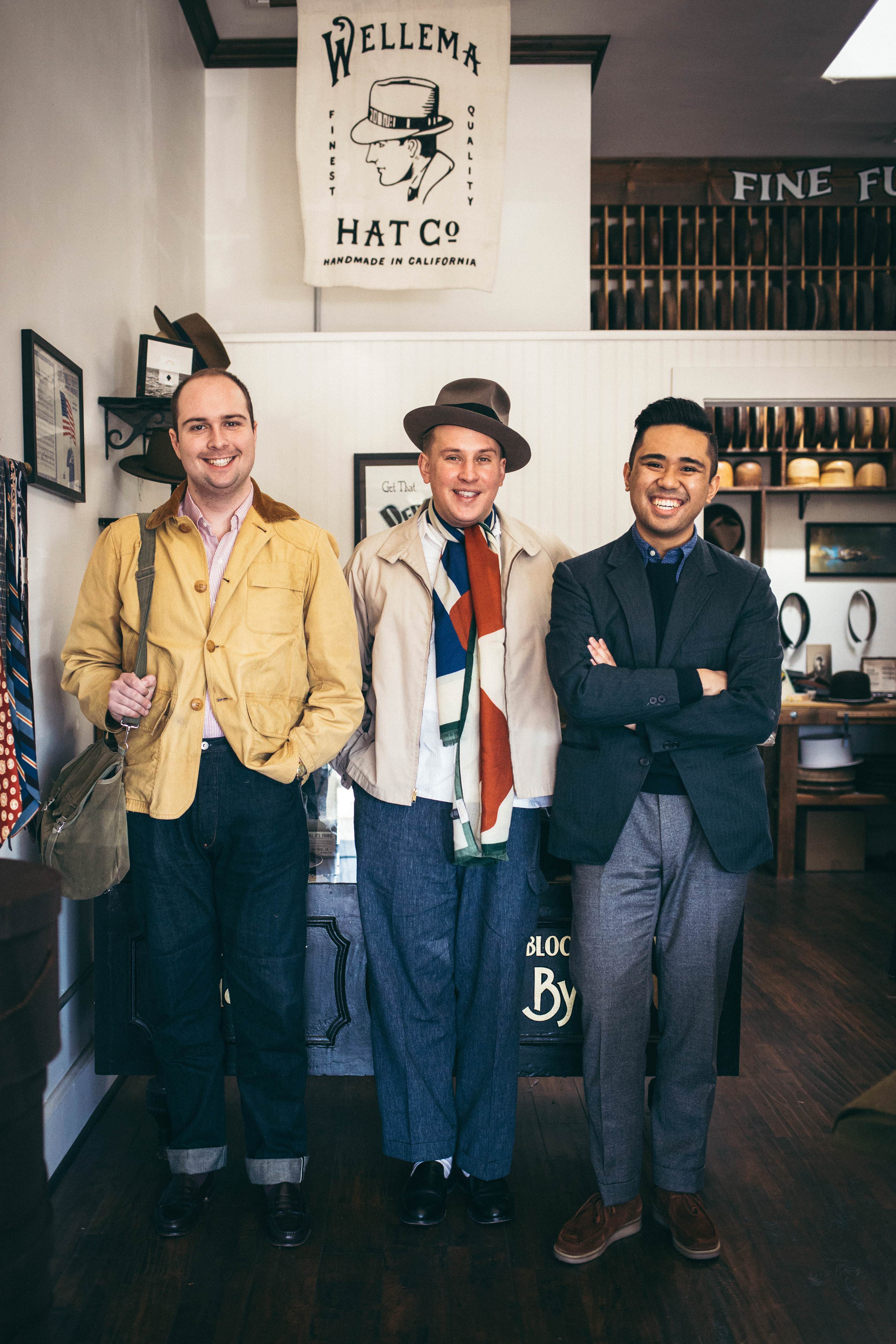 As a guy who started out looking at pictures on tumblr, I never thought that I would be friends with a guy who makes beautiful hats, let alone interview him! Becoming friends with Cody really marked a transformation in my own life, as it was right around the time I started working for Ascot Chang.   Now I was friends with a guy who was also trying to make his name in menswear, both in our own special way.

Cody really is an inspiration to me.  Even though he’s a true artisan, he isn’t afraid to be dorky and fun like the rest of us.  He’s constantly trying new things with his product and style that reflect my own journey both in my clothing and this blog.  I’m proud to be his friend and I’m really happy that I was able to finally do a proper feature on him.

Plus I just needed an excuse to finally share the hundreds of pictures I’ve taken.

You can follow Cody on instagram or check out his website.  Be sure to listen to our full, unedited conversation with him (which has way more details that this article) on our podcast Style & Direction.