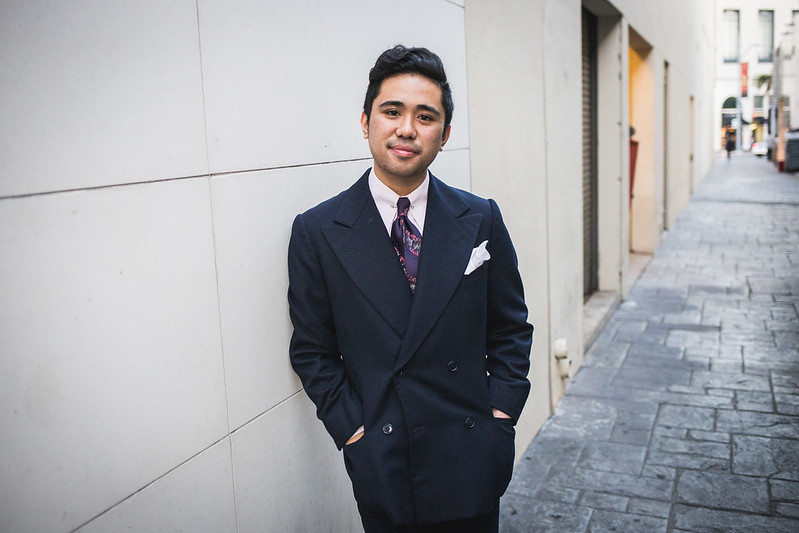 An elegant DB is a must for any classic or vintage menswear enthusiast.  But do I taper the legs to make it more “timeless”?

Something that I always confess to people when shooting the shit on tailoring is the fact that I really lack a lot of the basics.  For example, it wasn’t until fairly recently that I got my first worsted navy sportcoat!  Almost all my suits have some sort of pattern or texture; you’d be hard pressed to find the plain colors.   In fact, my only true navy suit is the DB one from my popular Indochino post, which is okay but nothing too special.  Even though it is a worsted (most of my full suits are tweed or flannel), it’s made of their premium superfine fabric, which makes it a little too delicate for me to wear often.

That changed when I came across a blue DB suit at Paper Moon Vintage, one of my favorite haunts which has the honor of being the first vintage store I ever went to.  It was a gorgeous dark navy (which unfortunately was medium weight flannel) with wide peak lapels and a 4×2 closure.  There was a lot of waist suppression in the jacket, so I knew that some alterations had to be done; the trousers were also long and tight in the waist.  For only $180, walking out with the suit was an absolute certainty.  But there was another thought lingering in my head: should I get the trousers tapered?

Now if you have seen my instagram livestreams or have just asked me, I typically don’t do any crazy alterations to things made pre 1950.  I believe in preserving the cut and history of the garment, as tapering the legs can sometimes require the removal of the excess fabric.  Also, as I noted in this StyleForum article most vintage jackets (from 1920s-1940s) look straight up awful with slim trousers. It’s the main reason why most of my regular wear comes from ivy stuff 1960s-1970s as I think they’re pretty versatile.

The suit itself came from the archives of Western Costume, one of the oldest production wardrobe companies in America.  It has stamps and labels of the production house in the jacket and trousers, but no union labels or tailoring dates.  It looked pretty 40s-50s in the cut, but it wasn’t too bold even though the button stance was slightly lower that what I prefer.  Blue rayon lining was found in its full form within the jacket.  The shoulders were padded, but not in the crazy vintage way; they were roped that is quite reminiscent of what you’d see on Saville Row  or at B&Tailor today.   Upon inspecting the trousers, there were reverse pleats but no back pockets; the leg opening wasn’t even too wide.  The fabric definitely felt old, but there wasn’t any damage or issues that you’d normally find on a suit of the same age.  Perhaps I just don’t have much experience with contemporary fabrics to make a knowledgeable decision.

The conclusion I came to was this: this was either an extremely well preserved suit from the 1940s-50s or a fantastic costume reproduction.  I’m normally not a fan of super-wide pants for “regular wear”, as I like to separate my true Golden Era Vintage looks from my day-to-day stuff.   I felt that tapering the trousers slightly would help it be more versatile, but my mind drifted to Arnold Wong of Attire House, who frequently uses high rise, wide leg trousers (in a true 30s-40s fashion) in his contemporary bespoke commissions. His vintage-meets-modern style is something I strive for. 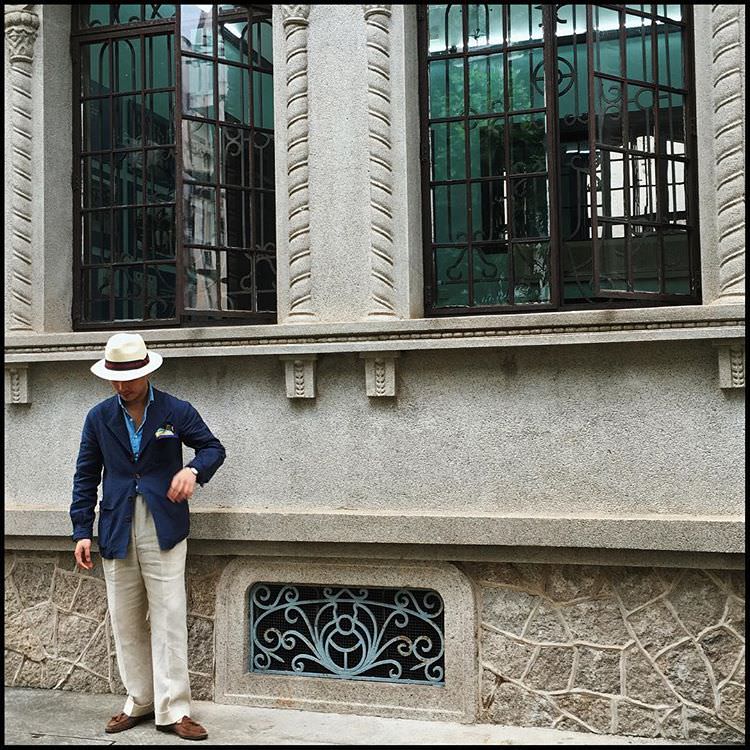 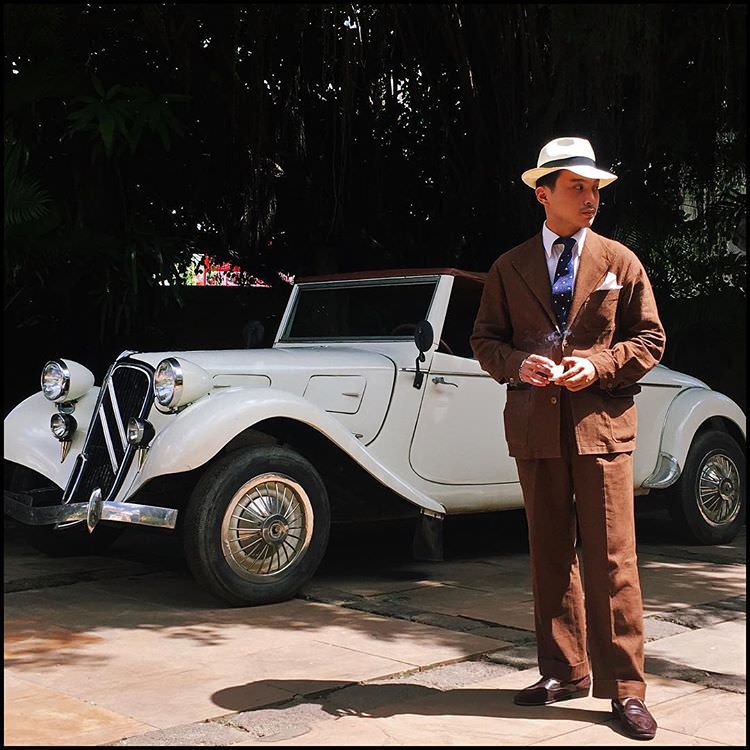 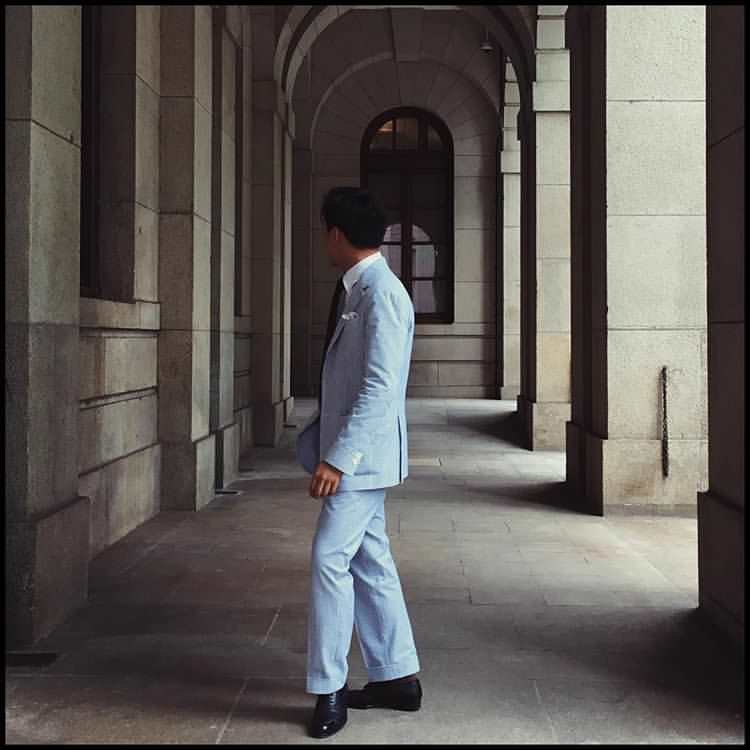 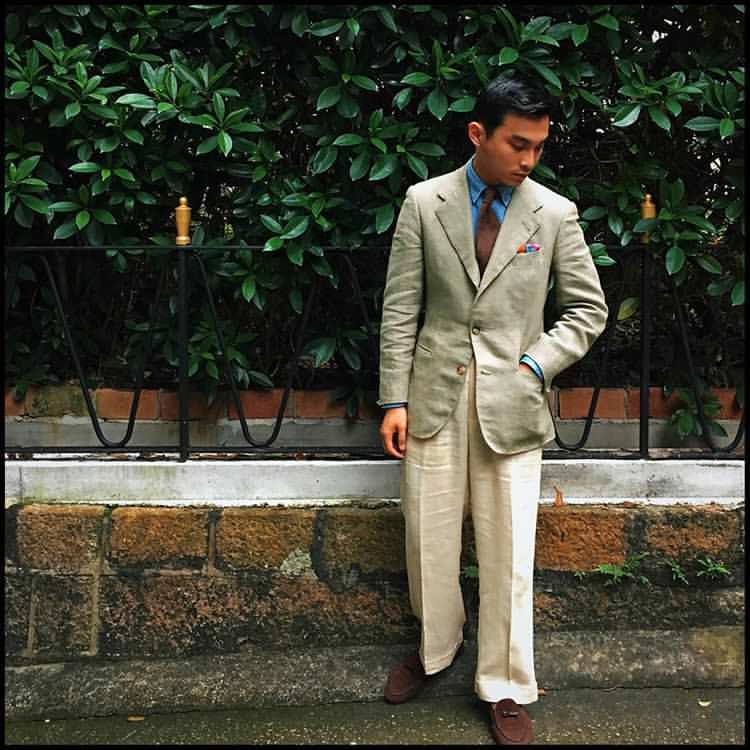 Intrigued, I decided to keep the trouser opening the way they were.  I only got the jacket let out an the trouser leg taken up (for a minimal break). Saving the money on the taper (which is less than $20) was a welcome choice, I’ll be honest.  This DB suit is now by far one of my most favorite pieces. 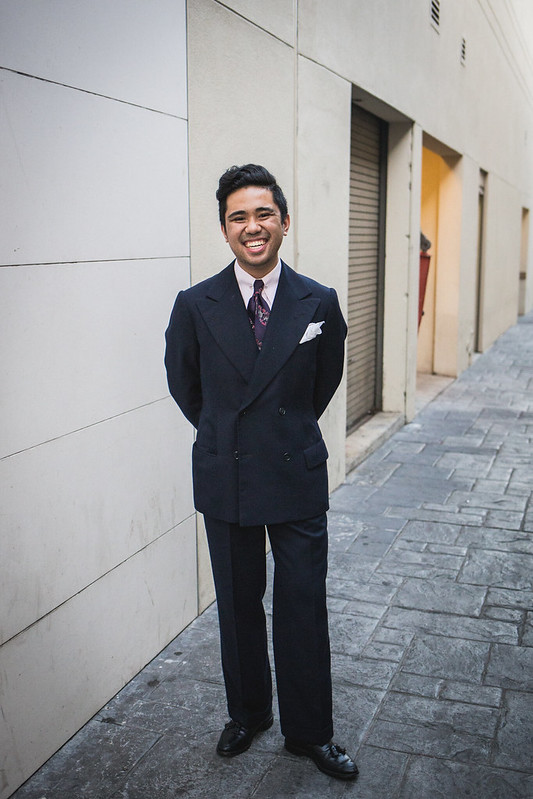 Here is the suit in all its glory.  As you can see, it s a very conservative dark navy, which is a contrast to most of my other “solid” vintage suits, which often feature some sort of subtle stripe or weave.  The worsted flannel drapes well and was slightly uncomfortable for the unseasonably warm January day, but it wasn’t too bad.  Taking after this look by Arnold, I went with a pinned stripe spearpoint collar and a beautiful french silk tie where the stripes contain some abstract brocade design.  I’m telling you guys, vintage ties are the way to go.  The tie choice makes for an interesting outfit, but it isn’t too vintage, at least in my eyes.

Looking at it now, after the alterations, I am really digging the aesthetic of the wider trousers.  It definitely adds some more vintage to the outfit, but it’s not entirely swing dancer-esque.  Personally, I feel like it wouldn’t turn too many heads in public if I picked a more “regular” tie. 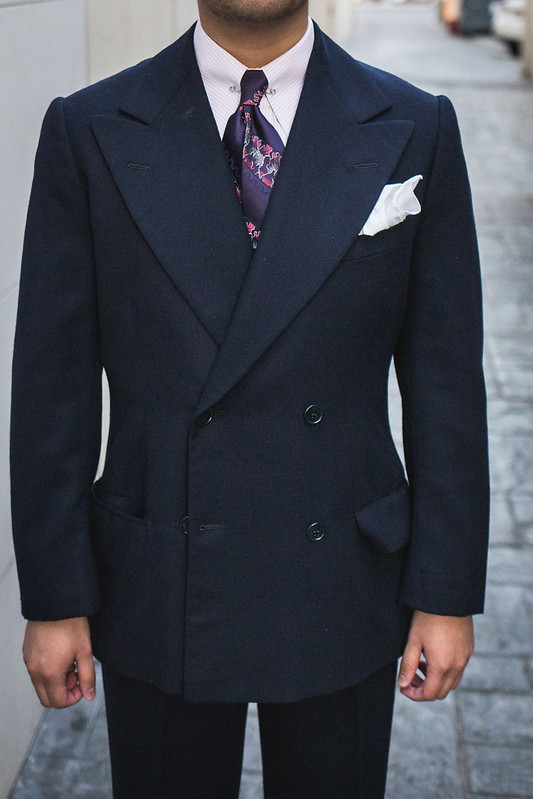 Jacket aesthetics and silhouette are one of the main reasons behind 90% of my purchases.  This one was no exception.  You can see the beautiful roped, extended shoulders, which look 1930’s and contemporary bespoke simultaneously.  The wide lazy peaks are a detail you seldom see, and I was in love immediately.  Even though the jacket was let out to be more comfortable, you just gotta love that suppressed waist.  That’s what you get from the vintage drape cut (which is now mainly seen on Saville Row suits).  You can’t find that at the mall!

Unlike most 1940’s jackets, the piece was fully lined. The presence of a single vent does point to the late 1940s or early 1950s (vents were reserved for equestrians and sporting jackets, but I am not sure if the jacket even is that old, considering the great condition.  There is only one interior pocket, which is also a vintage detail.  Two interior pockets usually point to a later-than-40s garment. 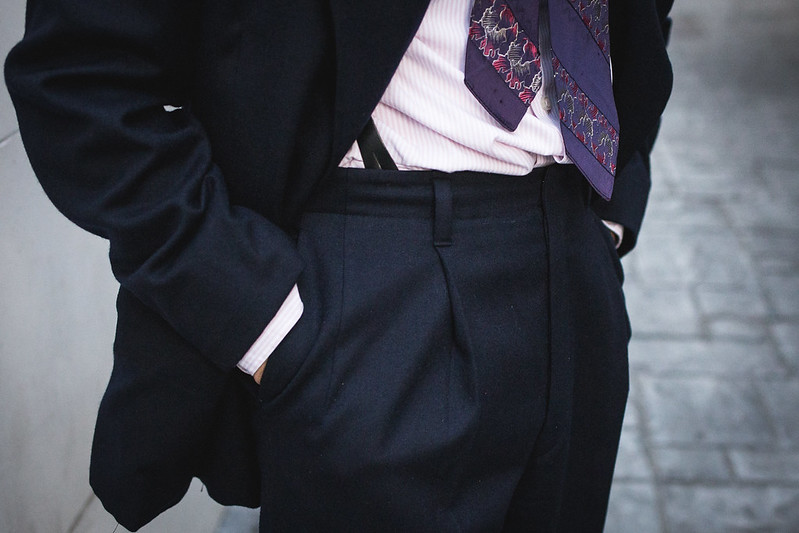 Trousers were fairly standard, as I stated before. They didn’t have any drop loops, but it does have a high rise and  reverse pleats.  As I stated before, there wasn’t any back pockets, which leads me to again believe that this is a costume piece. 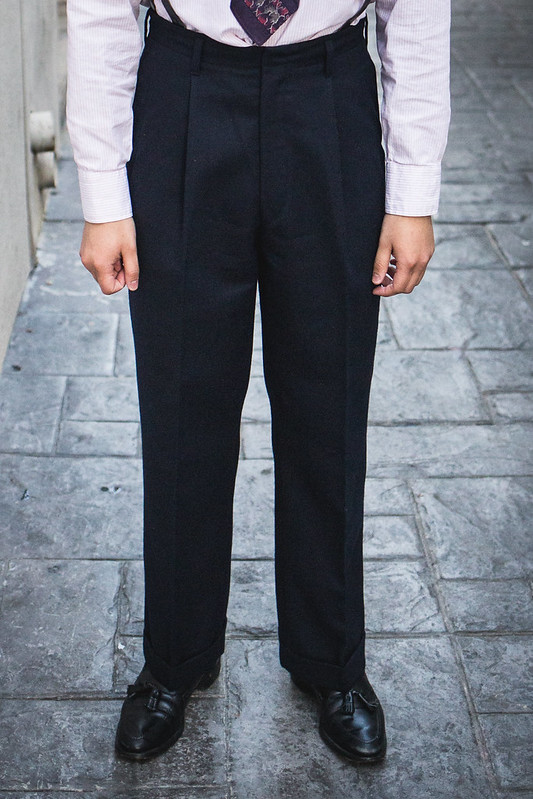 Here’s the final kicker, the silhouette of the legs.  I kept the full wide leg opening of the trousers, which I think looks perfectly alright here.  I’m not a fan of overly tapered legs (no matter what my two year old blog posts sa) and prefer a straight leg that has a semi- slim look without being too wide.

I don’t think that these trousers look too wide at all! Sure, they may be different than what you’d see at Banana Republic or J. Crew, but I think the width is a personal choice that still fits in today, especially with the proper hem.  To emphasize the contemporary nature of the outfit, I went with black tassel loafers.  Guys back in the 1940s wouldn’t wear loafers with suits, but they’re practically common place today.  I think it works fine and achieves the vintage-meets-modern look that I was going for. 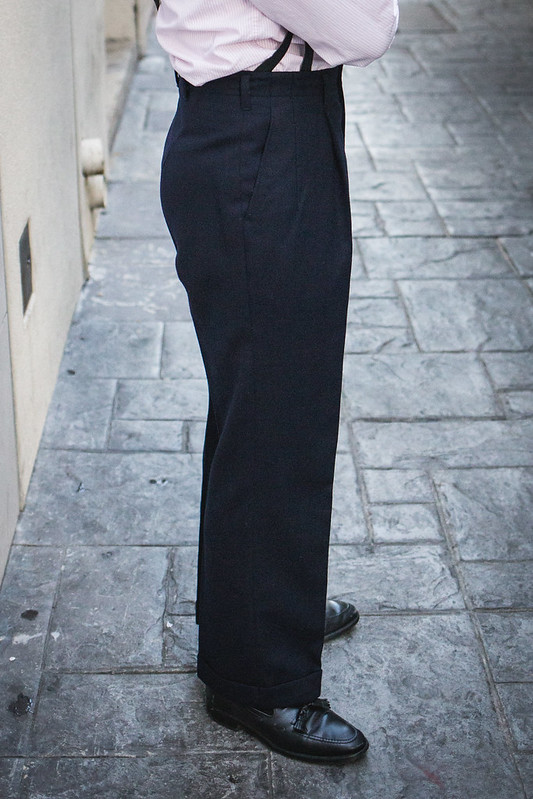 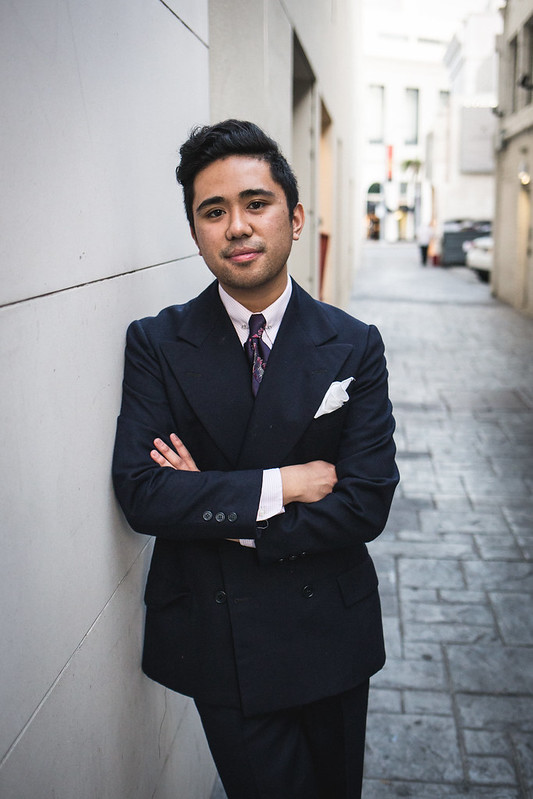 When you compare this “1940’s suit” to the Indochino one, there is no contest.  Not only is the design superior (just look at those lapels and shoulders), but the fabric much better.  The dark navy allows me to wear this in typical “Ethan style” but provides some wiggle room to make a formal outfit.  While I wish I had a single breasted  navy suit (since that would be more versatile), I’m not complaining about this one.  It was a good purchase and I know it will get plenty of wear.

Again, I am not sure on the age of the garment. It’s either a true vintage 1940’s piece in great condition or one of the best repros that I’ve ever seen.  The attention to detail is spot on, and while there is a low button stance and pocket placement, I don’t think it detracts from the versatility of the suit.  Since I couldn’t tell when it was made, I did originally think of tapering the trousers to make the piece a firmly contemporary suit but ultimately decided against it.  Spending less money on alterations was a benefit, but I really was up to the challenge of bringing a suit with wide leg trousers into contemporary-classic menswear.I think I’ve succeeded at that.

While it does catch attention, it soon fades into being just a classic suit.  Most of the time, its hard for me to enjoy drape cut suit as it is either way too vintage or too  elegant for everyday wear.  However, everything on this suit is done tastefully, without many extremes.  I can make it ultra vintage or make it contemporary; all that matters are my choice of shirt, tie, and footwear.  I can finally say that I have an ultra versatile navy DB suit that won’t be too odd for both contemporary and vintage events.