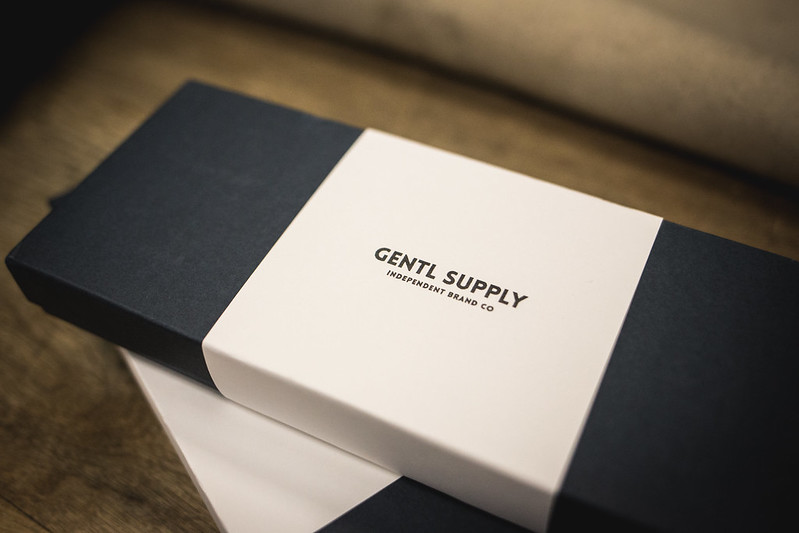 Disclaimer:  We received two complimentary ties and I decided to write about them.

Continuing our small coverage of affordable contemporary tie brands, I give you GENTL SUPPLY.  They actually had to slide in my DMs since I literally shop for ties by searching “1930’s tie” on eBay. Go figure!

The reason why I don’t do sponsored posts are because I am brand-illiterate.  Other than Drake’s or B&Tailor (the later of which is a tailor), I really don’t keep up with what people wear, especially since vintage is the name of my game.  This doesn’t mean I dislike contemporary stuff, it just means I’m not nearly as exposed to it.

Last time we looked at the cool Irish-Poplin repp ties from Mr. Jenks.   Today we get a bit more lively with some prints from GENTL SUPPLY, based in Spain.  Like Mr. Jenks, this company is small and produces accessories for men, rather than any RTW clothing.  In addition to ties (which is what they contacted me for), they also offer braces, pocket squares, and eyewear from the Bespoke Dudes.

According to their about page, they say that their accessories are manufactured in Spain and that they only make 12 pieces of each item.  It allows them to keep inventory exclusive and prevents unnecessary build up, which I think is smart.  When an item goes out of stock they begin a process of selecting new material/designing that only adds to the “get it while you can” theme of their products.

Going over their ties, it’s apparent that they really covered their bases.  While the GENTL SUPPLY  untipped grenadines are slick as hell, what I really like are their prints.  It’s honestly hard for me to get behind contemporary printed ties, since they’re either too weird or too boring (for my taste).  Not a lot of brands have that “oomph” that I get from vintage ties; only Drake’s and Sevenfold really take the cake, with the latter being a bit more fun, in terms of prints.  However, I can’t really afford stuff from Drake’s at this point in my life, which is why GENTL Supply really stood out to me.

They had DM’d me a few times on instagram and invited me to check out their printed ties, as they felt that some of them were vintage (and therefore I’d like them).  Usually I’m pretty wary of brands that tout that kind of thing, as they usually aren’t too vintage.  However, I was pleasantly surprised!

They weren’t exactly super 1930s-40s, but they certainly had the vibes down.  With prints that range from the standards you’d see at Berg & Berg to the oversized medallions/paisleys from Drake’s, I was very on board.  I’m pretty spoiled by my thrifting and eBay prices, but 50€ for a new tie is pretty affordable.  It’s certainly more doable than Drake’s, especially if you want to get that Drake’s vibe!

Instead of going with a classic menswear tie, I wanted to get a tie that felt more like “Ethan”. So I told them that I was interested in the LANX and the DZIBAN, with the latter being the typical Ethan Print (it’s even the wallpaper for the blog).   I expected to only get one, but they actually sent both to me, even calling them “Ethan ties”.  It only took a few days to get to my place, though I had to wait an extra day since a signature was required (as they were coming from Spain). 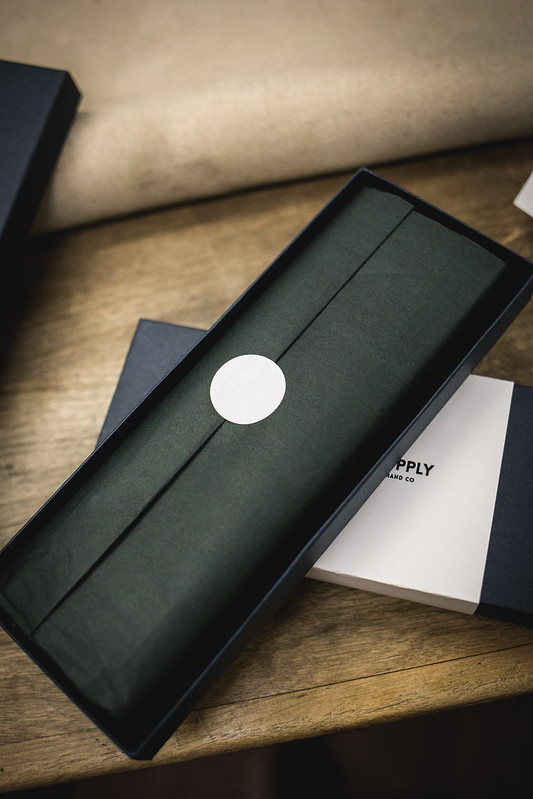 The packaging was really nice; matte box with a slip tag.  It’s all pretty minimalistic, which is great! 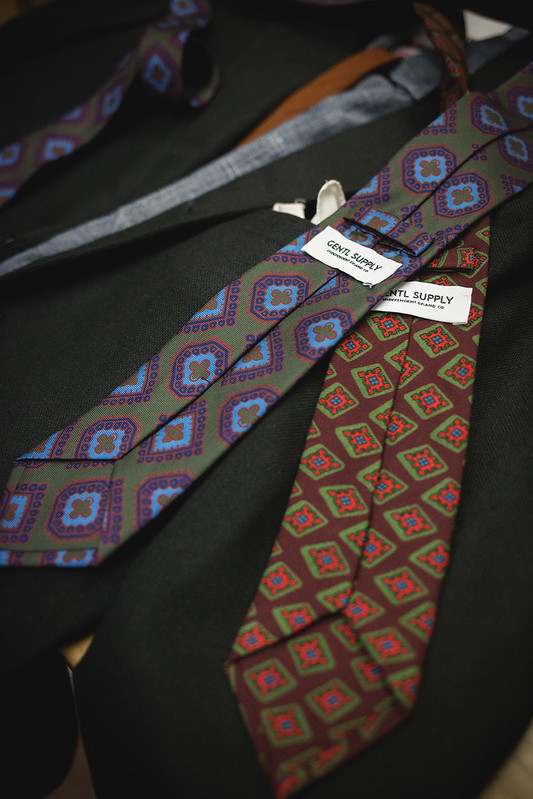 I don’t think I’m ever going to get over handling new ties (or anything new) since I’m so used to buying things that have aged.  While each tie has a different material (LANX is silk while DZIBAN is wool), they both have the same dimensions.  Like most contemporary ties, the width is slimmer than what I’m used to, with a very minimal taper through the body; the overall length is something I can’t get behind.  Additionally, these ties have thicker interlining than my 30s-40s ties (which have barely any interlining), which results in a thicker knot.  My main problem is that both of these issues (length and interlining) lead to some work arounds: either I get a slim knot and have a long length or I tie the knot closer to the front (to get a proper length) and have a huge knot, as the tie is wider in that section.

Honestly, these issues aren’t a big deal and a big part of sprezzatura is to not give a fuck.  They are great ties and I couldn’t wait to wear them! 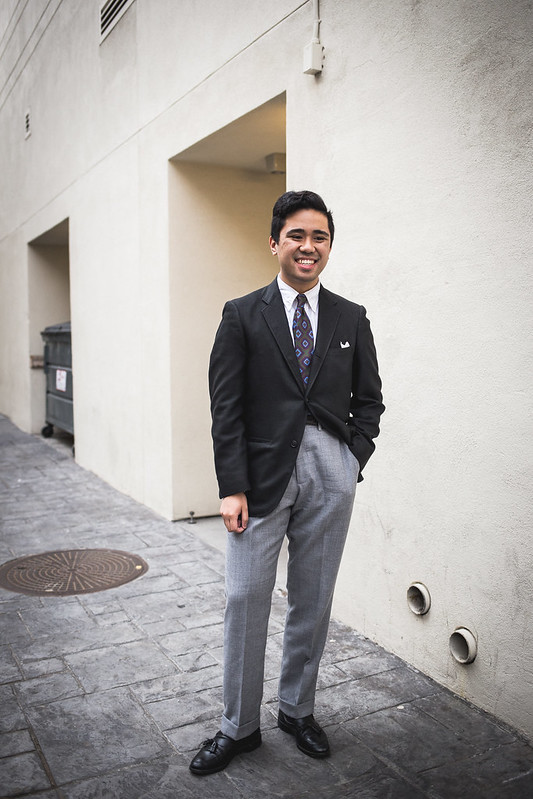 With the DZIBAN, I went with an outfit that was half Drake’s inspired and half 1960’s minimal.  As you know, Drake’s is a big fan of oversized patterns, worn with soft OCBDs; it’s not exactly vintage, but it definitely has the old school vibes.  The minimalism comes in the form of two gray pieces: a hopsack charcoal sack jacket and some high rise light grey trousers.  I don’t normally do looks that are this “dark”, as I prefer the softer tones of blues and brown, but I gotta say that I liked looking sleek for once!

Obviously the green/blue motif of the tie can go with everything (one of the reasons why I selected it) but I think it really pops here with the muted outfit, even if the attention is subtle. Due to it’s medallion like print, it definitely has something in common with a few slim psychedelic 1960’s ties, which is another reason why I went with some minimal mid century vibes.  This tie achieves vintage vibes without being too vintage. 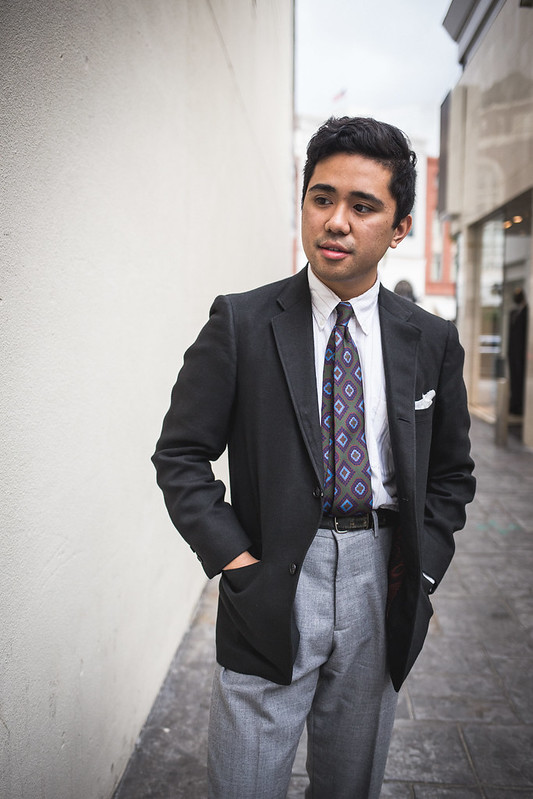 As I said before, these contemporary ties are much too long for my vintage proportions. In order to get a good knot for the tie, I had to deal with long blade lengths. It’s not a huge issue, as I followed the Drake’s lead and simply tucked it into the waistband of my trousers.   I know a lot of people have a problem with this, but I like it because it gives an “I don’t care attitude”. I mean what else am I going to do with a long tie?  I’m not going to be buying vintage ties every time. 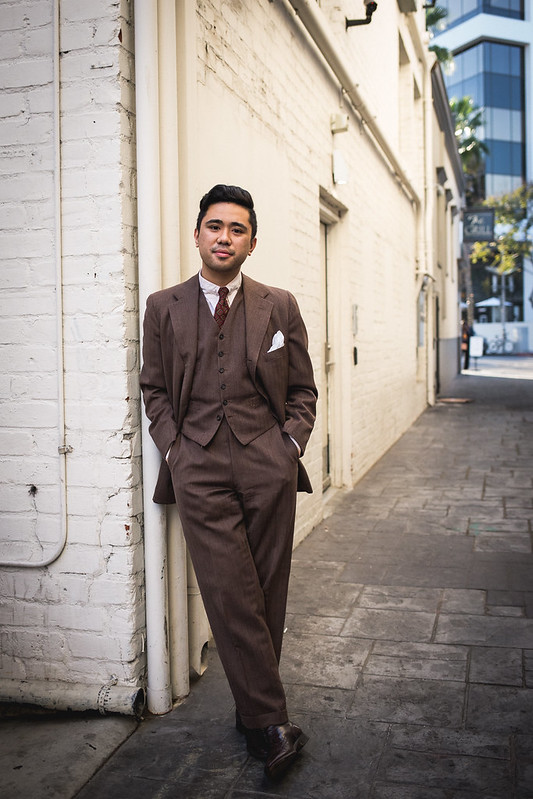 The LANX is a wool tie with an awesome print, that contains hues of green and blue.  In fact, it reminds me of my favorite pattern ever, worn by Jake Grantham at Pitti.  I’m telling ya, burgundy foulards are the shit.   If the print is bigger than what you normally see on classic menswear guys, it gives you just a little bit more personality.  In short, it’s pretty vintage looking, even if the tie was made yesterday.

Here, the LANX is worn with a pinned, brown striped spearpoint and my favorite suit, the 3PC Brooks Brothers sack suit from the late 1950s.  Can’t you just feel the vintage vibes already?  I’m telling you, you just need a striped shirt and a patterned tie. 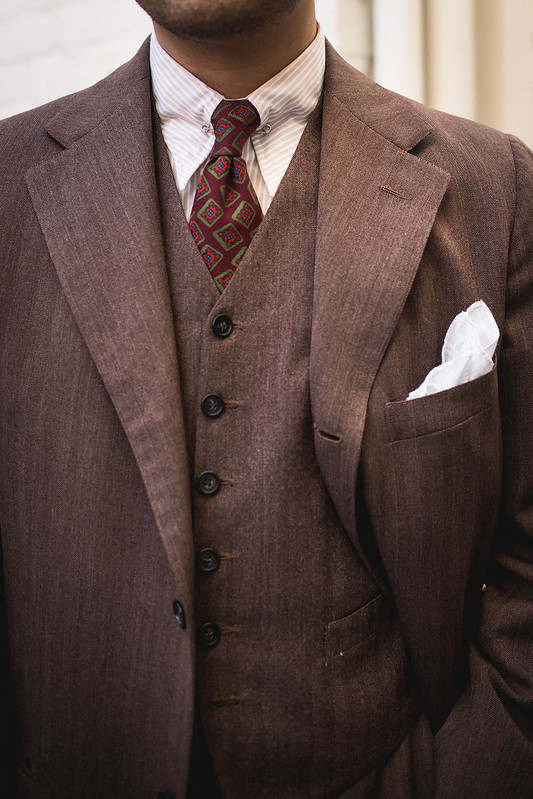 Like the tie before it, this one had to be tied long and extremely tight in order to achieve the narrow knot that I prefer.  If I wasn’t wearing the waistcoat, you would have definitely seen that both tie blades were tucked into the waistband of my trousers.  I will say that the tie looks really great in this outfit here, appearing like a true vintage 1930s-1940s tie.

GENTL SUPPLY is a pretty solid tie brand that’s completely affordable.  With prints that evoke the boldness of vintage ties, I think that it’s definitely worth a look.  Obviously they don’t compare to true vintage ties, but at the very least, you’re getting a very well made new tie.  Most of my vintage ties have some stains or wear spots and while I don’t mind, it would’ve been fantastic to get them in pristine condition.

Even if vintage isn’t your thing, these ties are still well designed enough to work with a classic menswear wardrobe.  A lot of the best dressed guys out there have been wearing bolder printed ties, not to be more vintage, but to just break the mold from solid or minimally printed pieces.  You can check out Drake’s and Sevenfold/Tie Your Tie for some inspiration on that one.

My main criticism of the ties is that it really isn’t entirely suitable for hard-core vintage enthusiasts.  The ties are long and have a much thicker interlining than any vintage piece, which results in a wide knot.  While it can look fine with a spread collar shirt (the collar of choice for most menswear guys), it can get crowded if you wear a spearpoint. Luckily, my solution is to just tie it as tight as you can and tuck the rest into the waistband of your trousers.  It’ll be okay if you don’t have a waistcoat to cover it up, especially if you like looking slouchy (which we definitely do).

Either way, the brand is a great way to experiment with some cool prints that are largely missing from most stores.  I can assure you that Banana Republic, J. Crew, or the Tie Bar doesn’t carry ties with these types of prints.  Most of the time, they get it flat wrong.  Opt for something like this that would go smashing with a brown sack jacket and grey flannels.  I mean Drake’s does it, just not all of us can afford it at the moment.   GENTL SUPPLY is a good place to start.