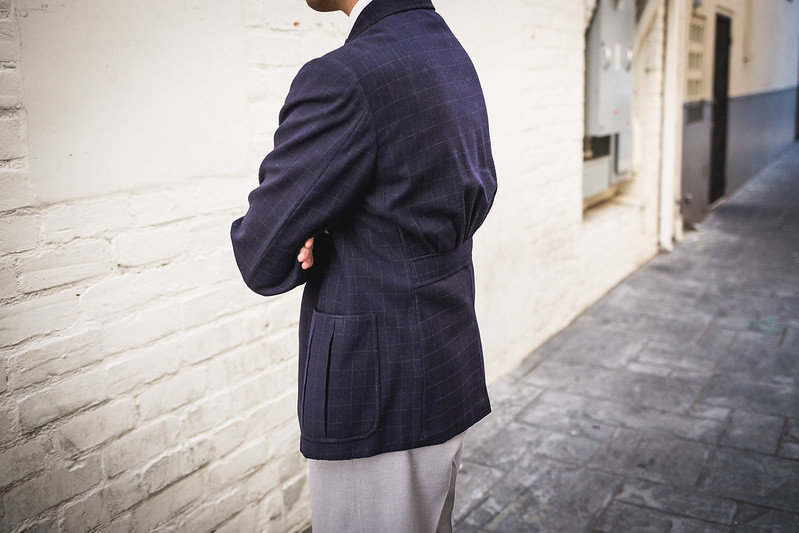 That title is a mouthful, but it’s exactly what this beast of a jacket is. They really don’t make jackets like this anymore!

We all should know by now how much I love belt backs.  I mean, menswear is all about the details, and a belt-back is one damn cool detail.  It’s a shame that brands don’t really do them anymore, but all things pass right?  There’s a small part of me that believes that I probably wouldn’t think they were interesting if these details were common place.

Like we said in that details article, belt backs were a functional way to add waist suppression.  Instead having a sack cut or opting for hidden darts, tailors would use a half-belt to tie down the extra fabric, resulting in either micropleats or something as crazy as a center reverse box pleat or a bi-swing back.  Not only did this come after the short-lived fad of fully-belted suits in the 1910s-20s but it was a tailored detail that separated “sports wear” (casual tailoring) from formal wear.

EDIT:  Now it’s important to remember that the waist suppression isn’t the draw of the belt back; it’s what the belt back allowed for.  Overall, a belt back gave more room for the wearer to move his arms.  This is because there was excess fabric in the upper body, which was tied down with the half-belt.  The resultant pleats would then open up as you moved.  Pleat types would vary from tailor to tailor, but the concept was the same.

Today, most tailors simply rely on high armholes for movement, but the jacket is still cut close to the body.  1930s-1940s belt backs not only have high armholes, but the belt back (or action back) gives you the excess fabric for enhanced movement without a bad fit.  Just look at how fitted the repro SJC suit is through the body.  You could even play golf in that suit without ripping the back of your jacket! Great belt back action on a reproduction 1930’s suit from SJC.

I know for a fact that a lot of contemporary guys abhor the belt back because it makes the back look a little stuffy.  Personally, I like that aspect.   I mean I always like mixing striped shirts and patterned ties, so go figure.  Anyway, since the belt back is so rare, it’s usually used as my threshold for buying clothes, since they often fetch high prices.  In all honesty, I wouldn’t touch bespoke unless I could have a belt back (among other things) because #1, I’m pretty much a normal 38S OTR and #2, good condition vintage is way cheaper.

Now if you know me even better, you’ll know that I also prefer patch pockets (for fisting) and droopy lapels, with the former being even more rare than the belt back.  The sad part is that suits and jackets with these details tend to be belt backs which results in the price being high.  It definitely makes sense as crazy pockets, fun fabrics, and belt backs are all sporty aspects of menswear; they are more commonly found together than separate.   So that’s why I don’t have many belt backs or more “fun” 1930s-1940s clothing; with all those details, prices go sky high. 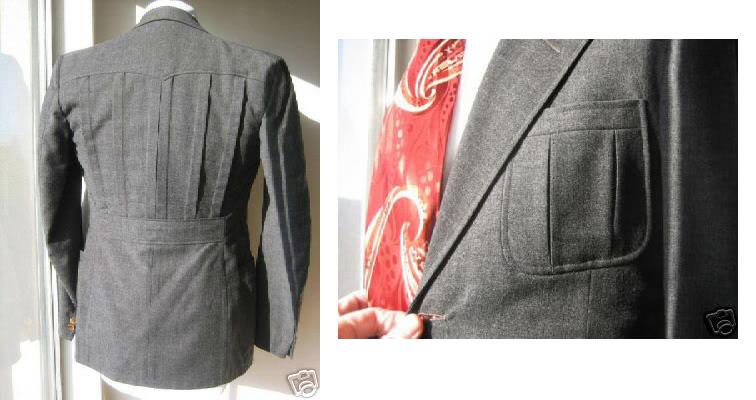 A jacket with great details all around.

The only way you can typically score a belt back is by having friends who sell vintage.  Luckily, though my years of collecting, I’ve made a few friends who are adept pickers.  Sure, they may keep some belt backs for themselves or post on eBay to rake up a huge profit, but sometimes they keep them in their store for others try on and buy in person.   For example, two of my belt backs were from Benny Reese. This new one however, was purchased  from Lulu, of Roxy’s Vintage Deluxe.  She was the same one who supplied my Brooks Brothers sack suit! 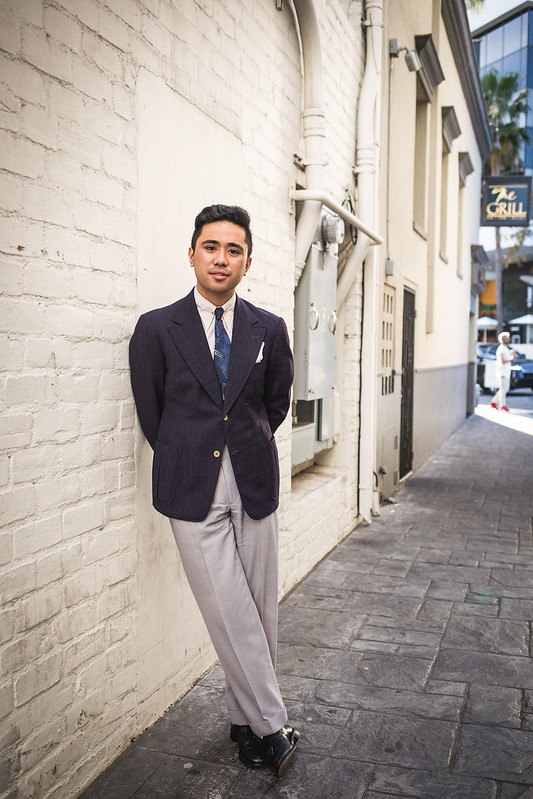 This early belt back is a mother-fuckin beast.  Navy blue with a light check, it’s a great “formal-ish” odd jacket.  I was semi-surprised that Lulu had it, as I had gone to her vast warehouse a few times during the summer and thought that I had seen everything.  Then I remembered that she rents out to film costumers and that her stock is always changing; there’s a big chance that she just got this one back.

I got to try it on during Inspiration LA a few weeks ago and was immediately in love.  It’s a bit loose in the chest, but it’s hardly noticable thanks to the agressively nipped waist.  You’ll also notice that the jacket is a bit short in the length.   While it may be for someone shorter than me,  short jacket length and heavy waist suppression was en vogue during the early 1930’s.   I’ve leaned away from the short jacket trend, but I’ll make an exception for this one.  At least it doesn’t have skimpy lapels and made of polyester, right? 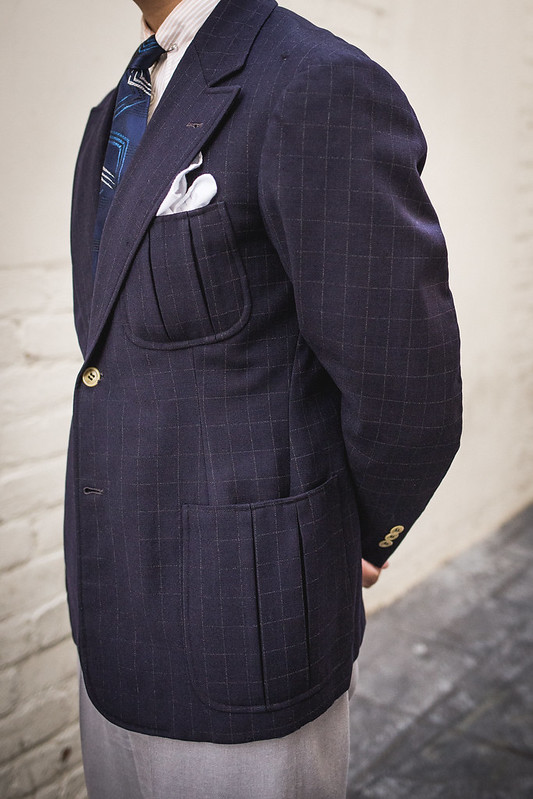 Patch pockets are rare on peak lapel jackets (especially triple ones), but double pleated patch pockets are even more rare.  I don’t think I’ve actually seen them in person before! Obviously these pleats are useful since they allow your pocket to “expand”, which allows you put whatever crap you want in them.  But who are we kidding; having two just puts it into straight fashion territory.

Apart from the double pleats, I do like that the pockets are a bit larger than what you normally find on a similar jacket.  Additionally, they have a swelled edge (continuous stitching about a few mm from the edge) and are cut with a slight curve.   Today, we would call this a barchetta pocket, which is popular in Italian tailoring. 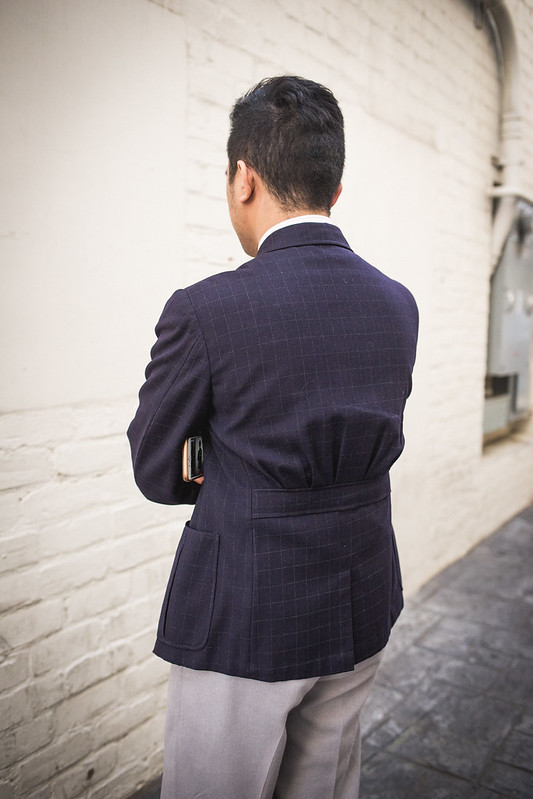 Here is the sexy back.  The belt is right at the buttoning point, which means emphasizes the nipped waist of the garment.  It’s not as crazy as some of the other belt backs I’ve posted on the blog, but it’s still a nice one.  When you pull your arms forward, you can see that the micro pleats open up.

Another fun thing to note is the fact that the jacket has a vent.  Vents in general weren’t widespread until the late 1940’s (as the lack of a vent made the jacket hug your hips to add to the slim figure) but they still were around. They were commonly seen on hunting attire, but I do recall seeing them on “jockey suits” for horse riders.  While the details can point to a jockey being the former owner (short length, belt back, vent), it was probably just a custom job for a wealthy, menswear enthusiast back in the day.  Unfortunately, they are no labels to draw any information from.

Overall I don’t think the jacket looks too dated.  While the shoudlers are structured (I prefer a natural, soft shoulder), it isn’t as severe as a garment from Saville Row.  Additionally, the drape is pretty darn great and the fabric isn’t too out there to be crazy vintage.  Sure the details are rakish, but I’ve seen other crazy stuff done in the world of bespoke that are definitely more dandy and bold than my jacket.  I think it makes a fine addition to my vintage-meets-modern wardrobe. 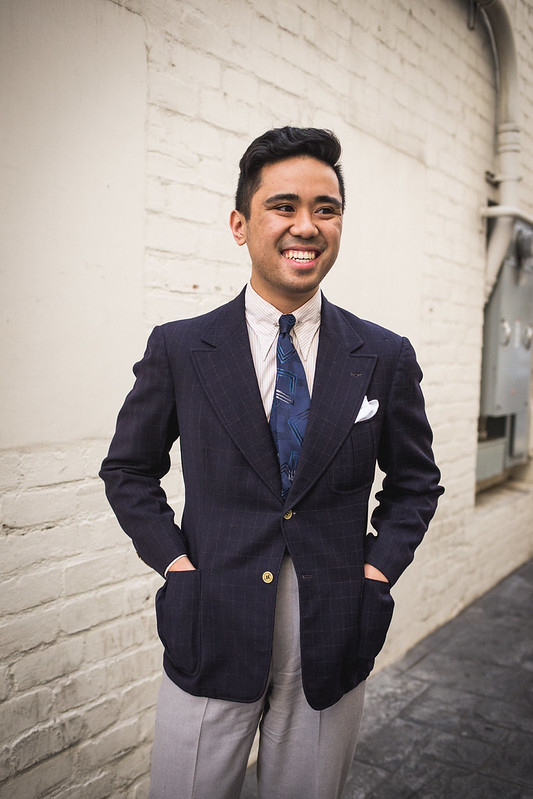 While it’s not that hard to wear a navy jacket, this one did cause me to take some thought.  While it is technically blue with patch pockets, the peak lapels and nipped waist make me feel like it’s a bit of a formal item.  Denim and chinos are definitely out of the picture (for now) so grey flannels were the natural choice.  Even though I’ve been trying to opt for a more “classic” look, I couldn’t resist paring the jacket with a square-motif brocade tie. It’s incredibly elegant and it really brings out the blue.

For trousers, I went with the cinch-back flannels.  They are a purple-brownish grey, but the contrast works well! 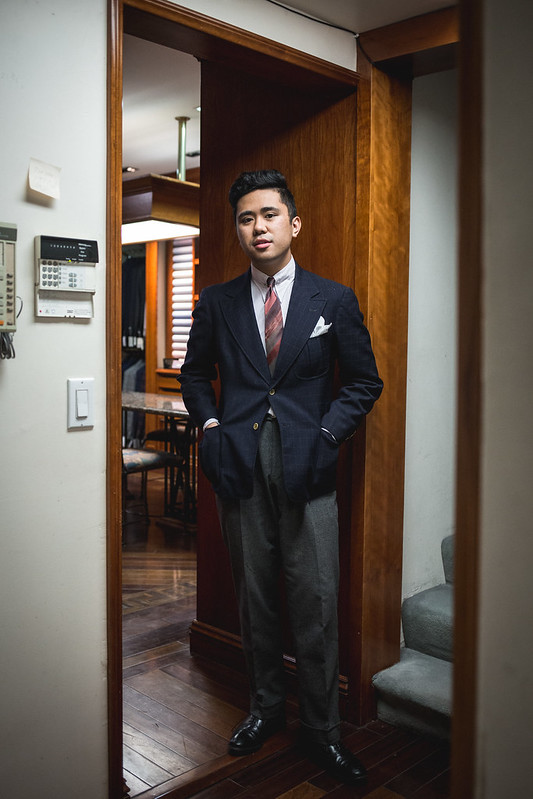 Here the jacket is worn with something a bit more “Ethan”. The light flannels were swapped to a more conservative dark color, while the blue tie was replaced with an elegant red piece.  This is probably how I’d wear it going to work or an event, but I’m open to other ideas.

Vintage details are cool, ok?  They just don’t make em like this anymore, unless you go bespoke.  Even then, a master tailor might not be comfortable altering his house style to do something new!  And (quite obviously), there’s the issue of sweet, sweet moolah.  Belt back jackets aren’t cheap, but they certainly don’t cost over a thousand dollars.

I’m pretty lucky  to have acquired this piece at a reasonable price. It might be just a jacket, but it’s great to have something elegant and interesting to wear, since my wardrobe has slowly become a mosh pit of slouchy, sack-jackets to wear with chinos and denim.  Plus, I also think its important that I own a few belt backs so that I can share them with you!   Belt backs (and other vintage details) are something that isn’t talked about in menswear anymore and hardly anyone gets to see or wear them. By obtaining them, I’m able to take some great pictures for the archive and provide a bit of history with my modest readership.

As of now, this might be the coolest, most detailed-filled jacket I own!  I’m honestly trying to lean away from super vintage garments, but belt backs will always have a place in my heart.  If the details are all there, the fit/silhouette is versatile, and the price is right, you bet your ass I’m going to buy it.