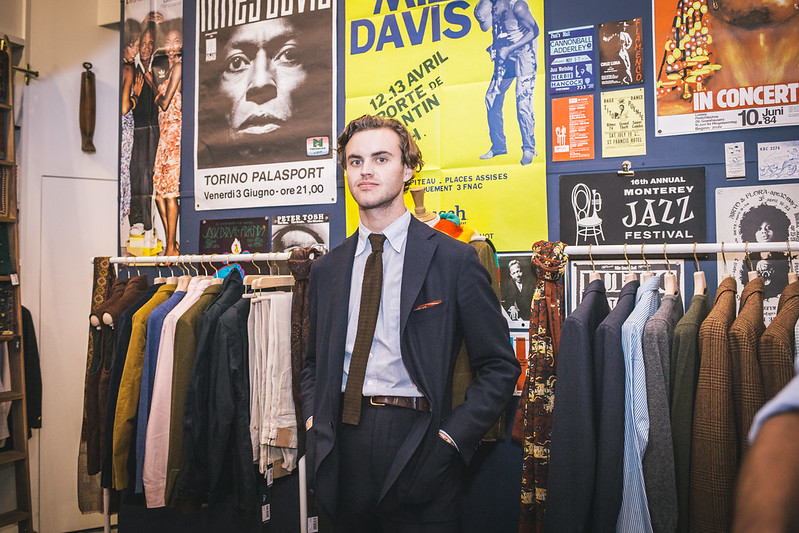 Drake’s came back to Pasadena and brought much more than than they did last time!

We all know how much I love Drake’s.   It’s pretty much a complete haberdashery that stocks everything from ties and pocket squares to tailoring and (now) shoes, all made for their private label.  They’ve come a long way since their days of only making neckwear (ties, pocket squares, and scarves) and that’s largely thank to the direction of Michael Hill.    We’ll explore more about him on a future post, but the brand has largely become a neo-ivy aesthetic (especially with the Fall 2018 lookbook), born from Hill’s own aesthetics.   With English meets Italian tailoring (i.e, classic but soft) and fun ties that aren’t boring or dandy, there are loads of reasons why they are one of my inspirations.

While there are only a handful of Drake’s shops around the world, USA only has one (in NYC), which means that the only way to experience Drake’s is to be lucky enough to be near a stockist or to attend a trunk show.  Obviously this piece of classic menswear is niche, with mainstream men today preferring to shop for name brands. Think more mall brands than artisanal.  Luckily for us, The Bloke carries Drake’s and was a stop of one of their trunk shows.  Chris and Kingsley came to Pasadena in the spring and offered seasonal ties, and their MTO service for neckwear, shirts, and shirt-jackets.

They promised Drake’s would come back in the fall (for new products and the Bloke’ One Year Party and they certainly delivered! 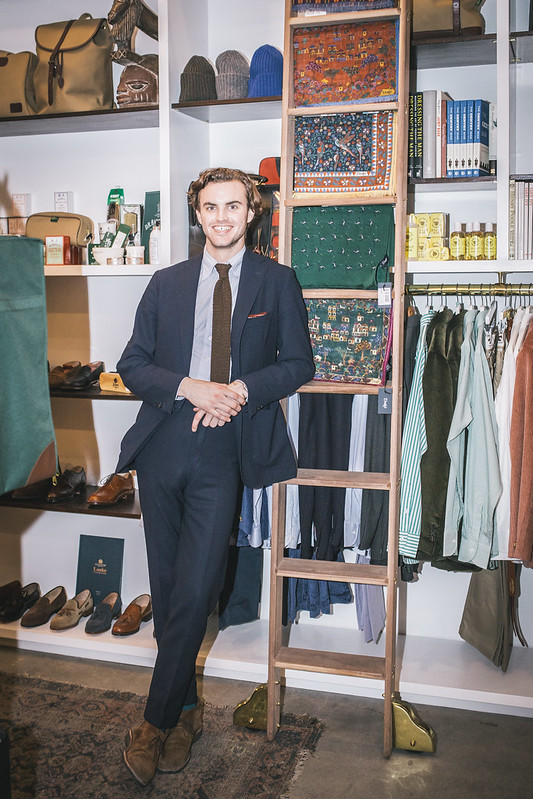 Matt in a MTM suit.

NYC Manager Matt Woodruff was the pointman for the West Coast leg of their fall trunk shows.  It’s a pretty interesting move to me since most of the time, the wholesale team has been doing the trunkshows. Now, it’s the store teams who are doing it (at least from what I’ve seen).  I think that’s pretty cool, almost acting like influencers in their own right, as many of them are quite recognizable thanks to the Drake’s instagram.

As I’ve said before on my coverage of my  solo and friend NYC trips, Matt was one of the first people that I reached out to in order to meet menswear colleagues and friends in the Big Apple.  He was incredibly friendly and was sure to organize a dinner on two occasions which included answering my many questions about the brand.  Matt was also one of the first people in the USA who worked for Drake’s, being in charge of their popup and was later named manager for the permanent location on Crosby.  He knows the everything about Drake’s and is in general, a great hang to hang with.

I was very happy when he said that he was going to be heading up the trunk show this time, though I was going to miss Chris and Kingsley!   Even though it was a late October day, Pasadena was absolutely blistering with a high of 90. That didn’t stop a few people coming in, which was a mix of Bloke clients, Drake’s clients, and a few Rando Calrissians.  It seemed like it was a bunch of fun, especially since it lead into the Bloke’s One Year party later on in the evening.

Let’s now take a look at the goodies that Matt brought with him! And don’t fret if you missed the show; most of the items will be permanently available at the Bloke! 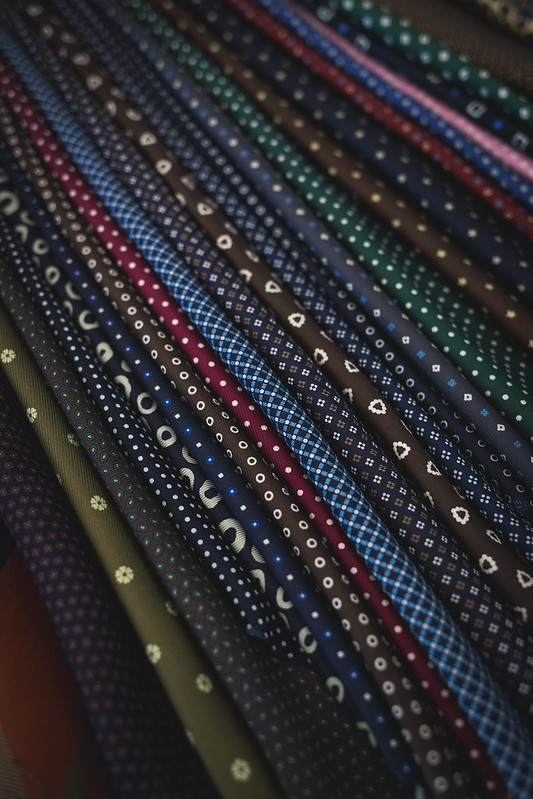 It wouldn’t be a Drake’s trunk show without their MTO tie selection.  Most of these are old fabrics that aren’t available as RTW anymore; as a result, these lengths are probably the last of the last.  Going MTO allows you to choose your desired tie length, interlining, and width. It’s a pretty cool process that we’ll explore in a future post (since I got a custom tie during my NYC trip), but it’s a rather attractive purchase especially if you are particular about your tie details.

I’m pretty sure they brought almost their entire NYC collection (each store has different fabrics to choose from), as I saw many that wasn’t there the last time.  They ranged from abstract prints and classic foulards to thick repps and textured wovens. 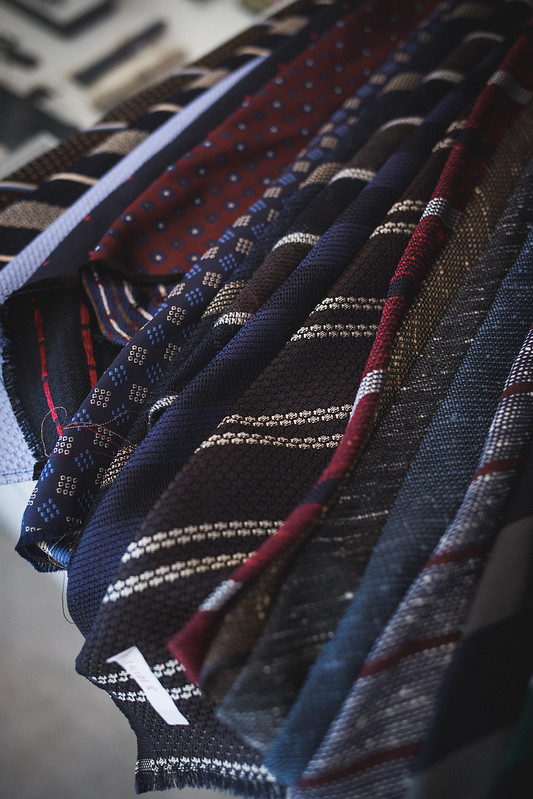 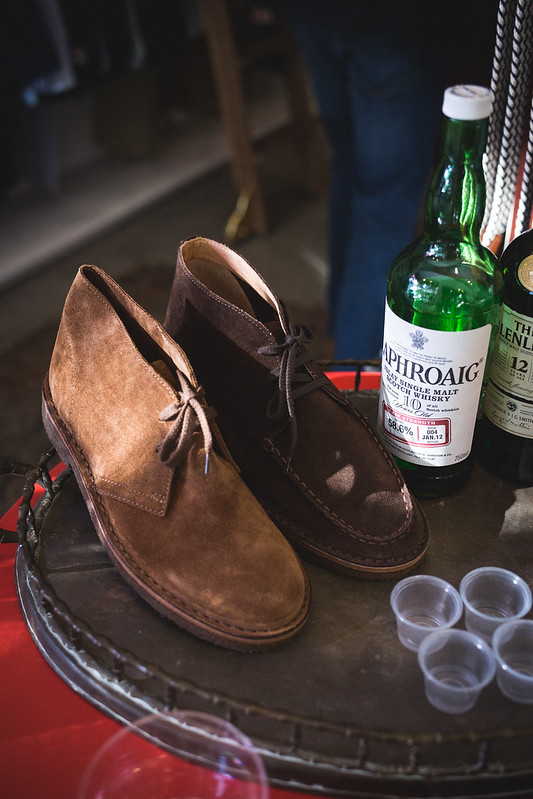 Drake’s has always stocked special models of Aldens (and later Paraboot) but they’ve finally moved onto launching their own line of footwear.  Chukkas and desert boots have been a favorite of Michael Hill and it makes sense that these two Italian made suede models are among the first that were launched.

The one on the left is the classic crepe sole desert boot. It’s streets ahead of anything coming out of Clarks. The shape is interesting to me, since its a more blunted last than the Alden unlined chukka that they love plugging (and inspired me to get my Loake’s).  This makes the Drake’s boot decidedly more casual, which fits in with their whole aesthetic.

The second boot is their upcoming moc toe models.  It reminds me a bit of a wallabee (due to the toe stitching) mixed with a desert boot, which  I’m sure is the whole idea.  They aren’t on the site just yet, but I’m sure we’re going to see something official soon! 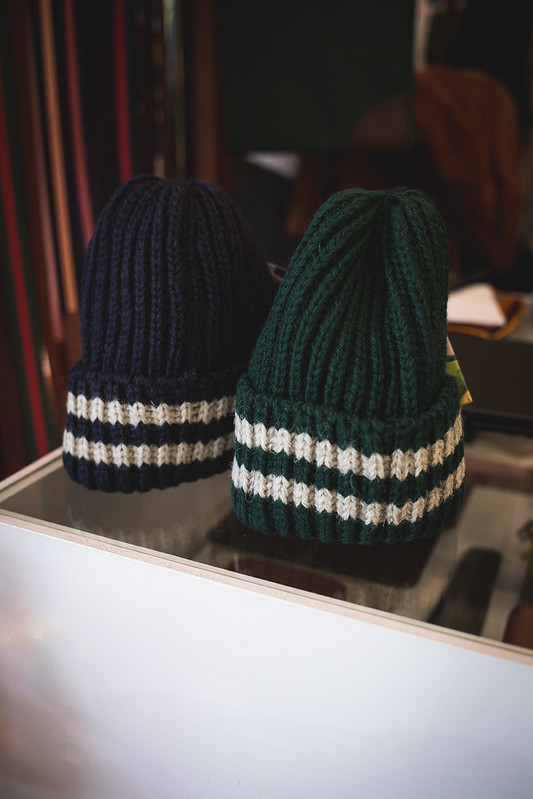 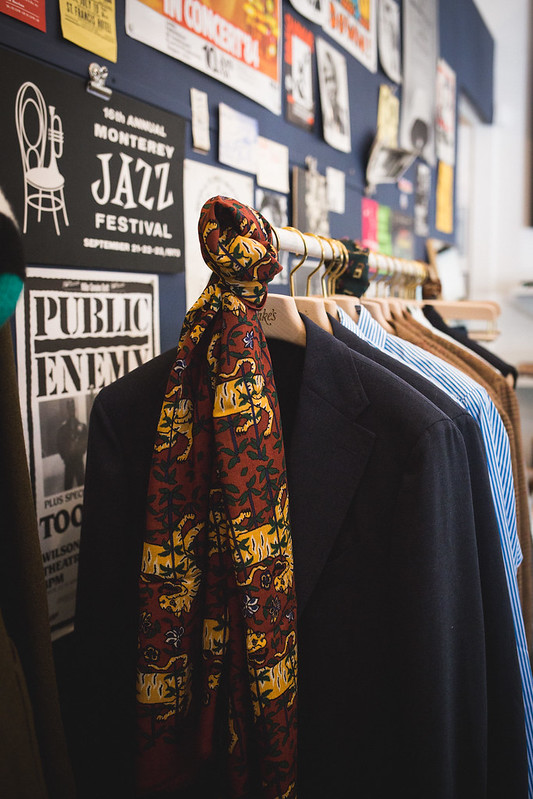 One thing that I haven’t made the leap for (but still love) are the “scene” printed scarves  It’s never cold enough for a scarf here in LA, but I still own a few.  Unlike the Drake’s ones which are extremely light and can be worn casually in a breezy evening, the ones I own are all thick wools which seldom see the light of day.  Obviously, the Drake’s ones are the way to go.  These tiger ones are really cool and are abstract enough to work with a tee shirt and chore coat or even under a checked sportcoat.  Solid and plaid scarves are much too boring, in my opinion.

Perhaps the reason I don’t wear scarves are because I simply don’t own any good one I honestly enjoy! 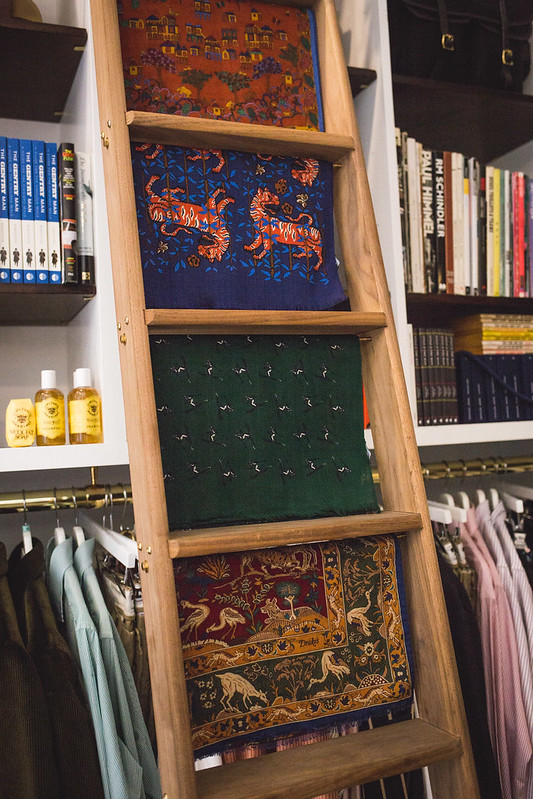 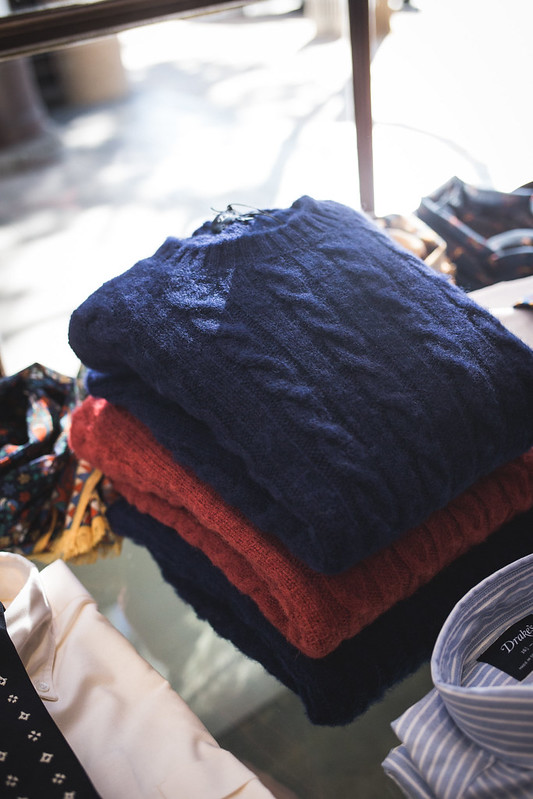 Shetland sweaters are always a favorite of the Drake’s team.  Last year they really went all out by offering colorful cable knit models and marketing the shit out of them on their lookbook.  They’re perfectly classic and begging to be worn with chinos and denim for casual ivy looks; the tied-over-the-shoulder decision is entirely up to you.

I can’t honestly give my endorsement on them, since I know it will never be necessary in LA.  Uniqlo offers some cotton cable knits in cool colors and might be more worth it for my fellow Angelinos.  With that said, I love the idea of a tough, vibrant shetland sweater. 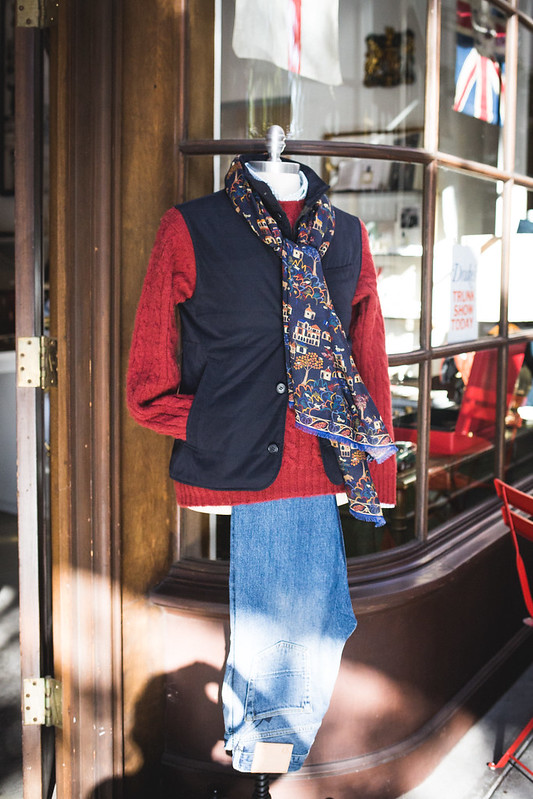 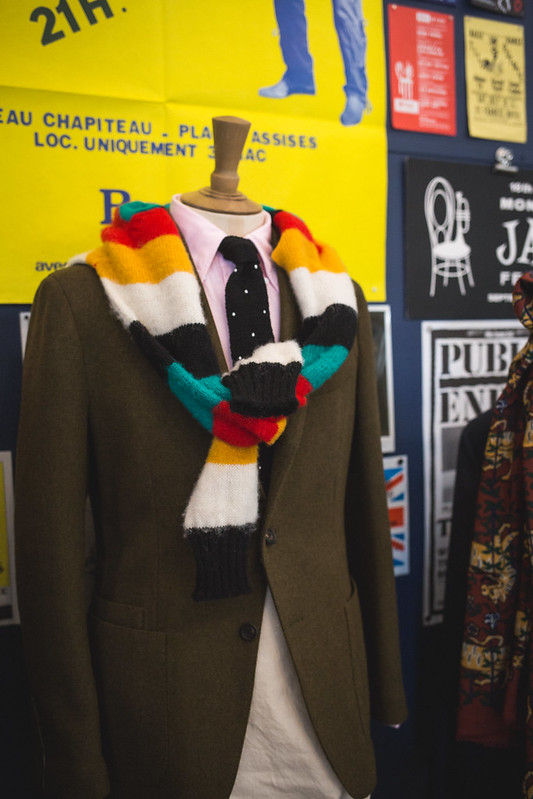 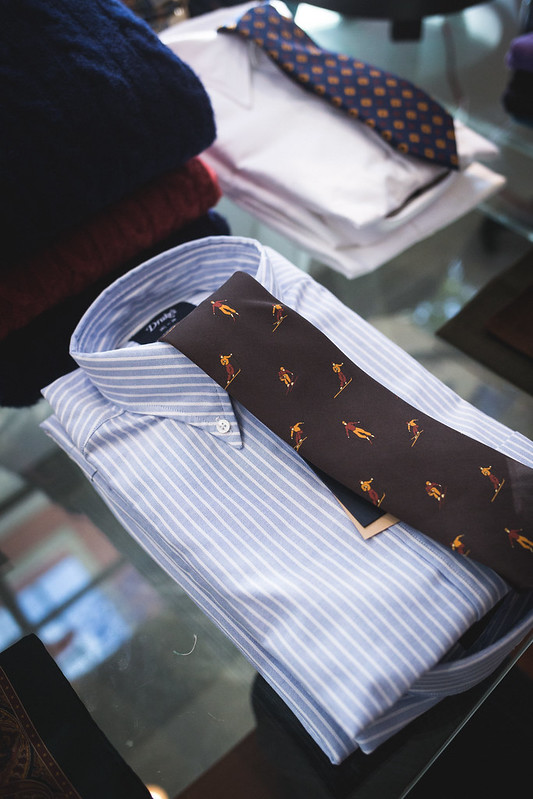 Oxfords and poplin shirts will always have their place and the Bloke has restocked in a few great models, paired with their seasonal ties.  While they have more types (especially as MTM models), the only two were button-down collars and their “long point collar” which is basically a spearpoint crossed with a semi-spread. I’m sticking with my more vintage-accurate models in bespoke from Ascot Chang, but these are a great way to get more of a contemporary look in RTW. 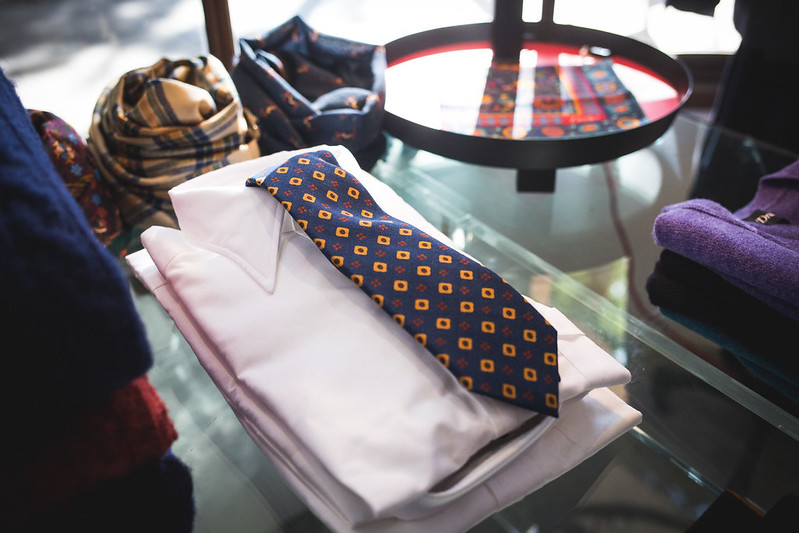 Can’t decide if I love or hate this tie. 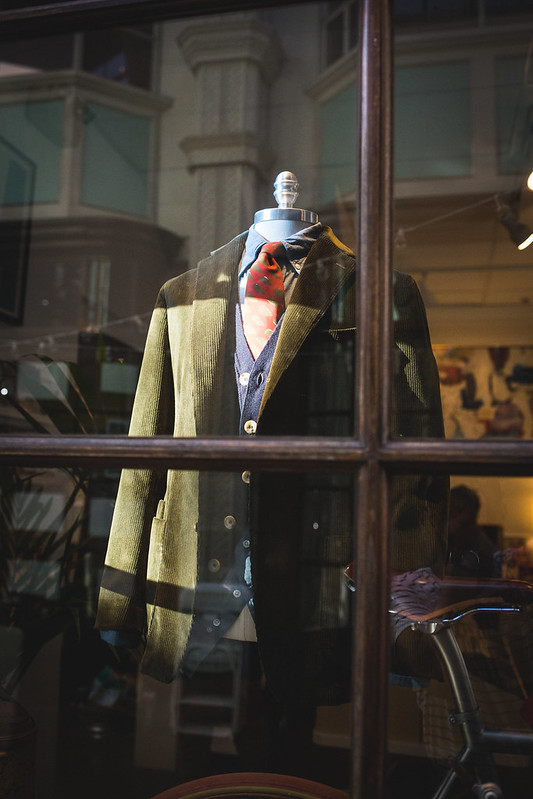 The Bloke now carries a variety of Drake’s tailoring. The house cut is fairly straight forward as it’s mainly a traditional sack-jacket combined with italian softness.  This means that a the jackets are incredibly light with a 3-roll-2 buttoning, a slightly trim body, and feature hip patch pockets.  They’ve done this up in a variety of different fabrics, from navy blue plain weaves for suiting to fall palette corduroy and hearty tweeds.  They are among the best RTW I’ve seen.

Matt and the Bloke offer the tailoring in the Easyday fit. 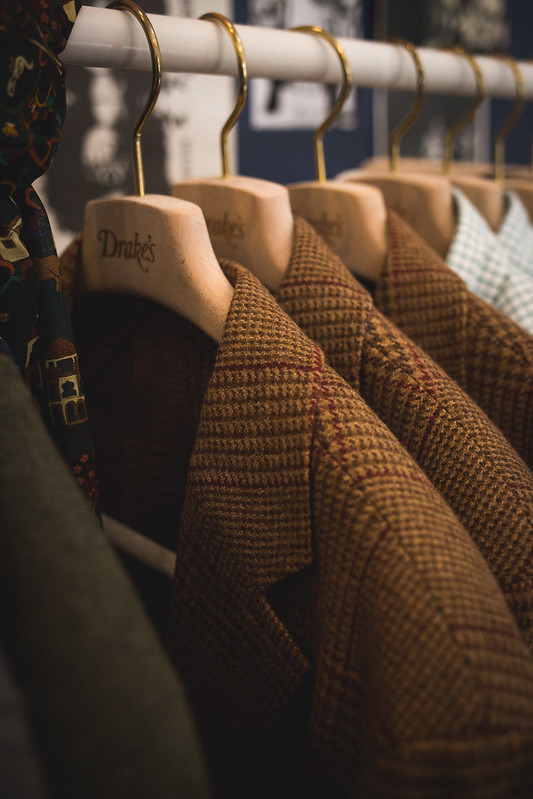 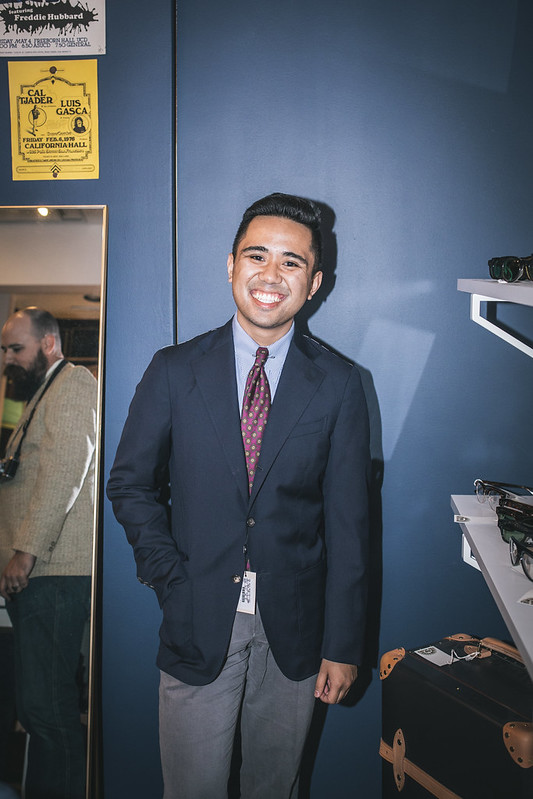 Here you can see the basics of the trouser fit (sorry I didn’t try on the trousers). It definitely has a lot in common with a later 1960s or early 1970s sack-jack, but updated with modern construction.  This navy jacket is actually apart of the mainline fit (a bit roomier and longer in my eyes, but the main difference is construction) and is half-canvassed.

I later learned that these suits are actually for their MTM service which is still in its early stages. Some guys have been wearing it, like the one you just saw on Matt and the amazing madras on Chase. Matt definitely recommends the MTM service, since you are allowed quite a few measurement changes.  He changed his rise, as a lower rise is pretty common on smaller sizes (and he wears a 28).  We gotta do what we can to get that #highrisegang.

As you can see a 36 is pretty spot on for me, I’d just need to take up the sleeves. 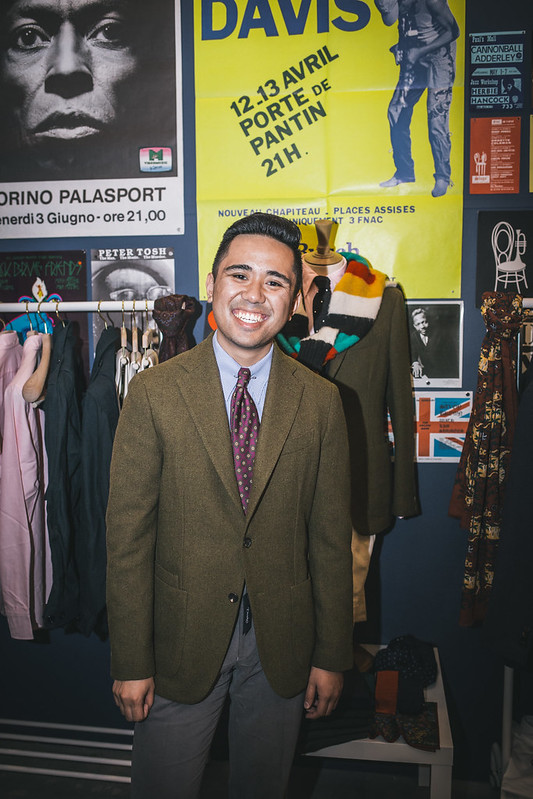 These next jackets are from the easy day collection. As you can see the fit is slightly different, specifically in the body.  The green tweed is pretty good, but the winner has to be the mustard corduroy suit. It just screams 1970’s ivy and I’m here for it! Luckily I found a true vintage one which you’ll see in the party recap. 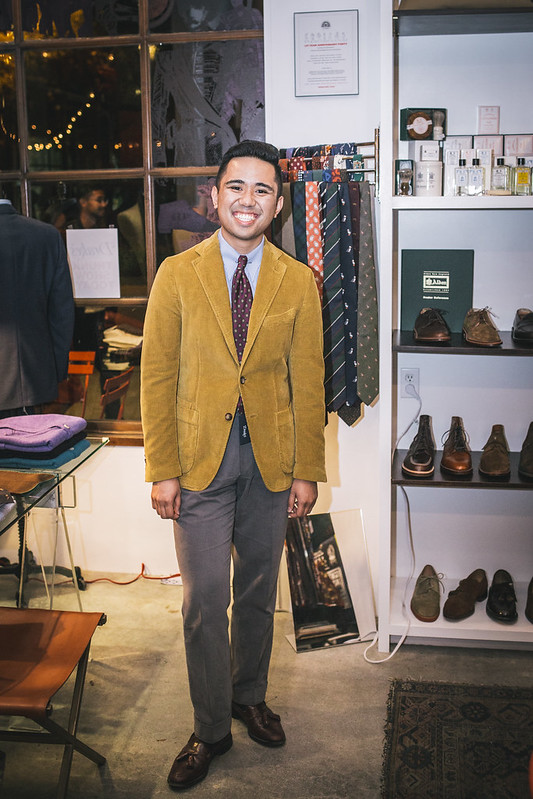 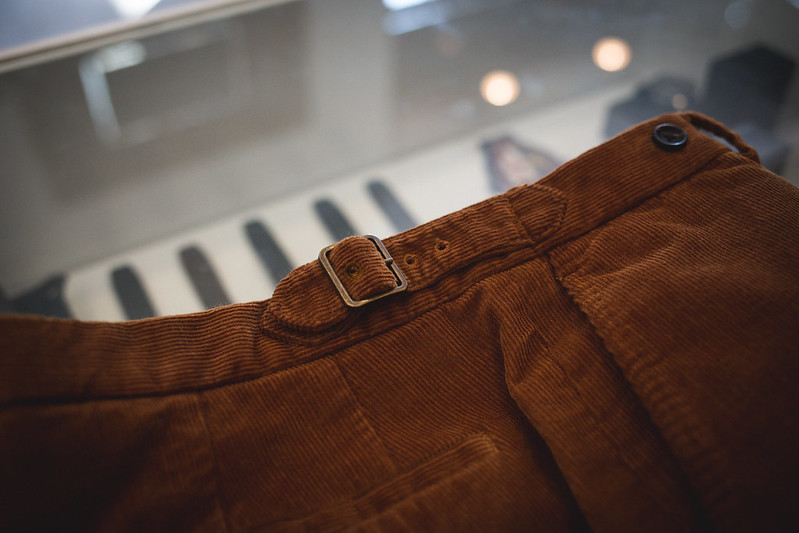 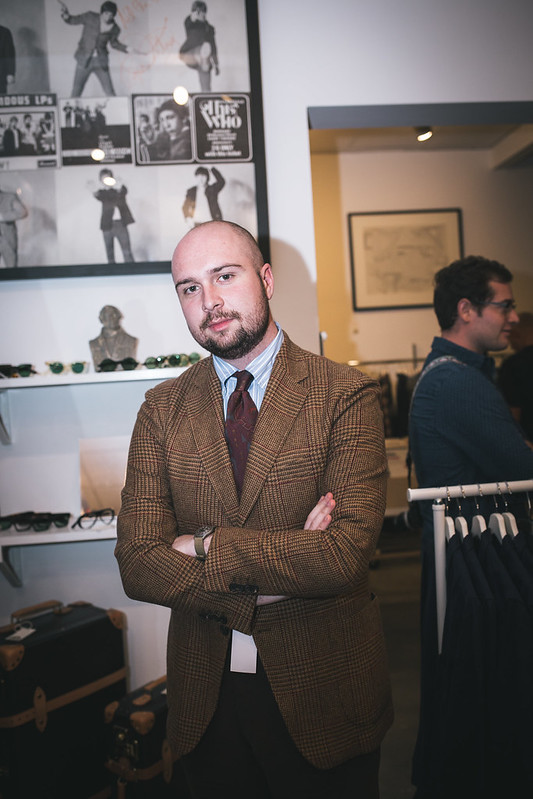 If we could have a perfect blog jacket, a brown plaid is it. 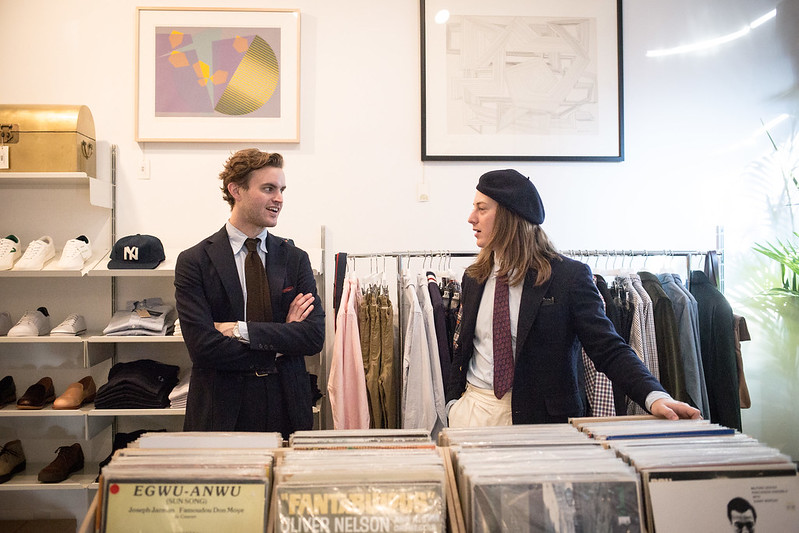 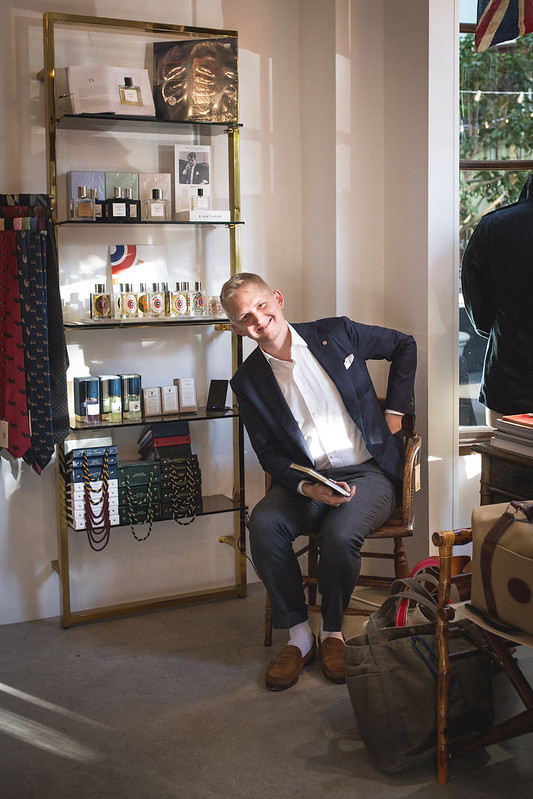 Ryan posing for my camera. 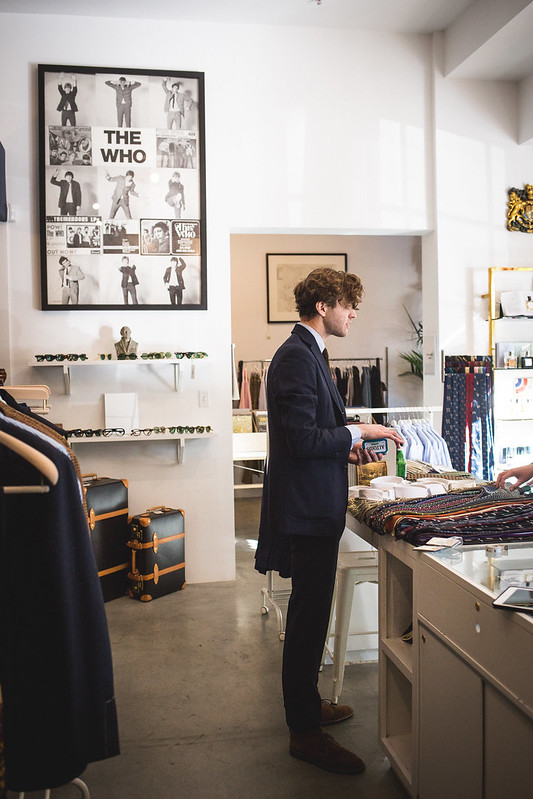 Overall, it was a very awesome trunk show.    I did come a bit late (3PM) so I might have missed the menswear crowd, but it was perfect since it allowed me to get to experience the products myself and talk to Matt about the details.  Again, he’s a great guy to hang with and is extremely knowledgeable for his brand.  Seeing him in action was a great throwback to my NYC trip.

While the MTO ties, shirts, and jackets are not available, the rest of the RTW will be available permanently at The Bloke. It’s a bit of a change of pace for them, but I’ve always thought that they could benefit for more tailoring.  Overall, it’s great news for SoCal and any other menswear enthusiast unable to get the Drake’s experience in NYC, London, Japan, or Korea.  Perhaps this small nudge by the rising menswear darling means that my efforts to create a menswear community in LA has been at least party successful!

BTW, If you missed this event and live in LA, you have no excuse since I always tell y’all about this shit on my instagram and facebook community group (which just passed 1k!). Shame on you.

Photography by me, who else