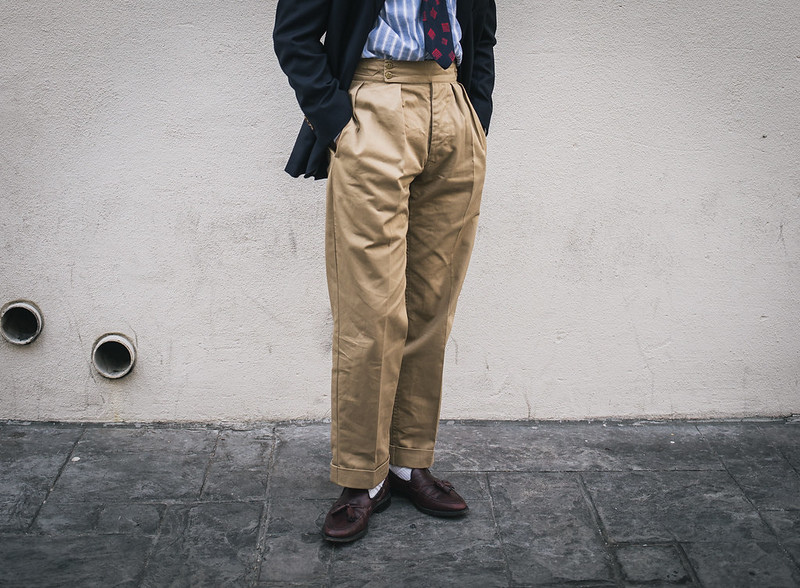 Decided to try some new chinos! They’ve got side adjusters, double forward pleats, and only  cost $60!

I did alter them though, in order to make them a bit more my speed.

For the past two years (or more?), gurkhas have been taking the menswear world by storm.  We talked about them as shorts, but the pieces have existed a trousers for a while (as chinos), still with the same extended, self belting closure.  Makers like Rubinacci have adopted the look and used them in creating more formal pants with the same details.

I think the biggest draw is how “minimal” it is. The lack of loops and a belt allow for a clean transition from trouser to shirt, making it a more versatile piece that can transition from formal to casual easily.  Personally, I like tucking in shirts without a belt for this very aesthetic.

I also think that the gurkha resurgence also lead to the rise in popularity for side tabs in general, since they’re a more accessible way to have a belt-less trouser.  It’s also easier to fasten than the gurkhas which feature a “criss cross” closure and a prong closure. 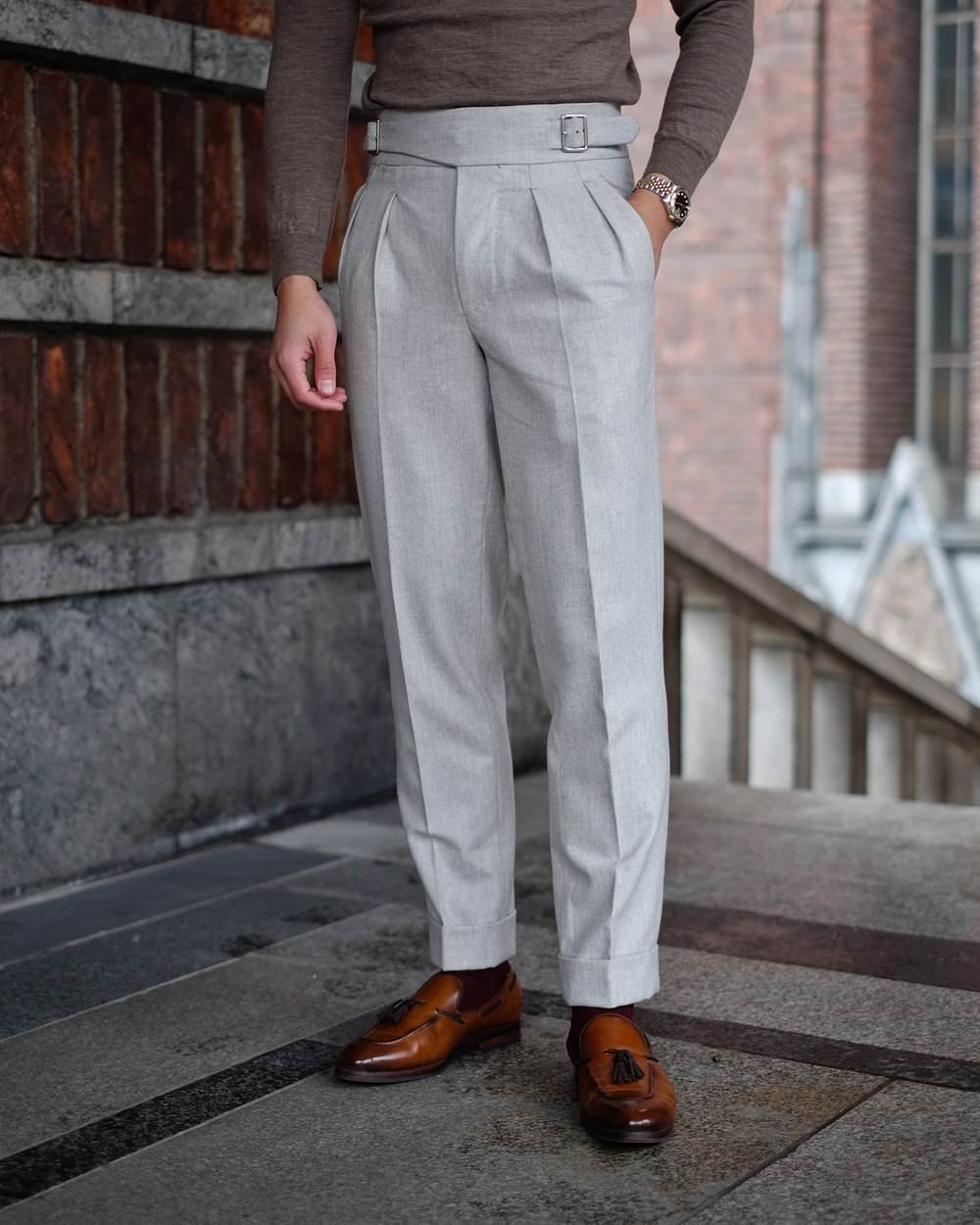 While gurkhas in worsted wools and linens are cool, I think I actually prefer them in the original khaki cotton. Doing them this way makes for a more rugged look, especially when combined with a wide leg.   Making it work with vintage casual or workwear looks is straightforward, but I think it’s interesting when put into a more sartorial context.  A slouchy jacket that has a bit of a nipped waist provides contrast to the wide leg silhouette that is much more interesting than the “norm”.

It’s an intriguing move for me, since I’m really just used to a slim-straight chino like my stoffas.  I never really owned any wide leg chinos and my shorts were the first real foray into that wide-legged, self closure style. Seeing  the Bryceland’s guys do it was also a turning point for me to try it for myself.

You’ll note that not all the chinos in this inspiration section have the Gurkha closure, but I think you’ll get the idea.  I really wanted wide leg ones ASAP, to wear for the remaining summer days and to get me through fall-winter.  The combinations are endless! 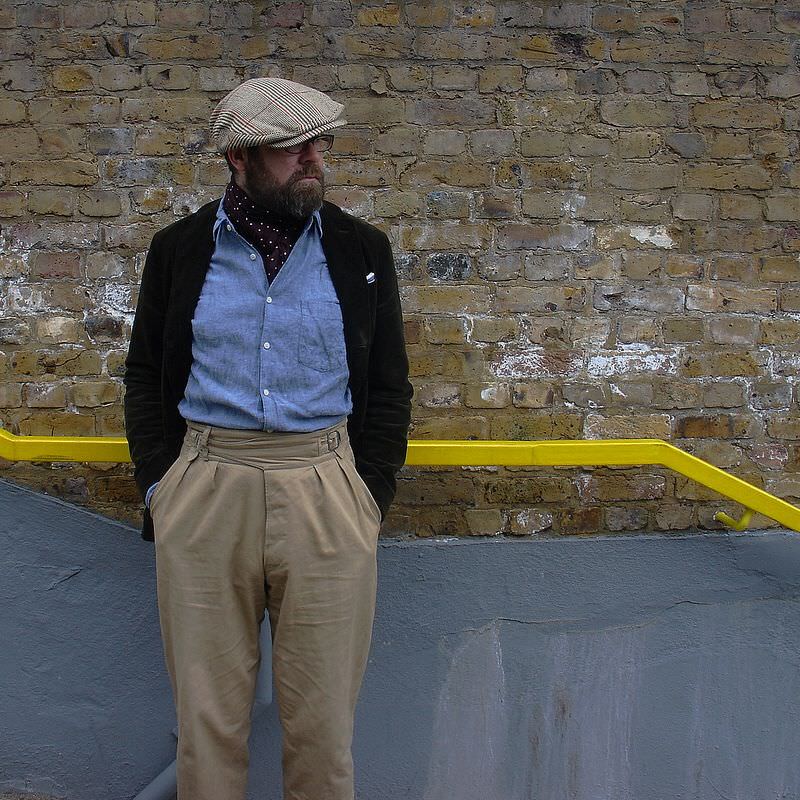 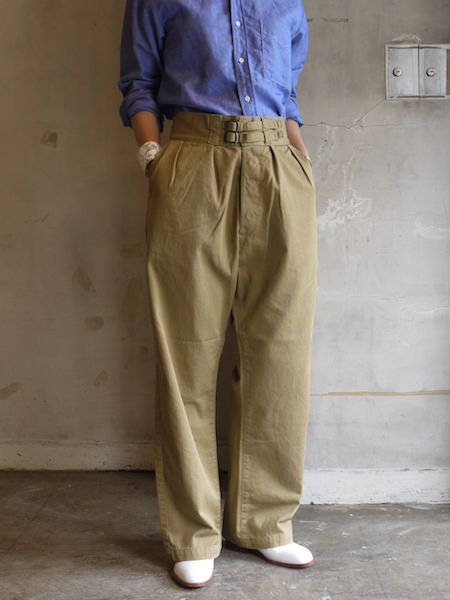 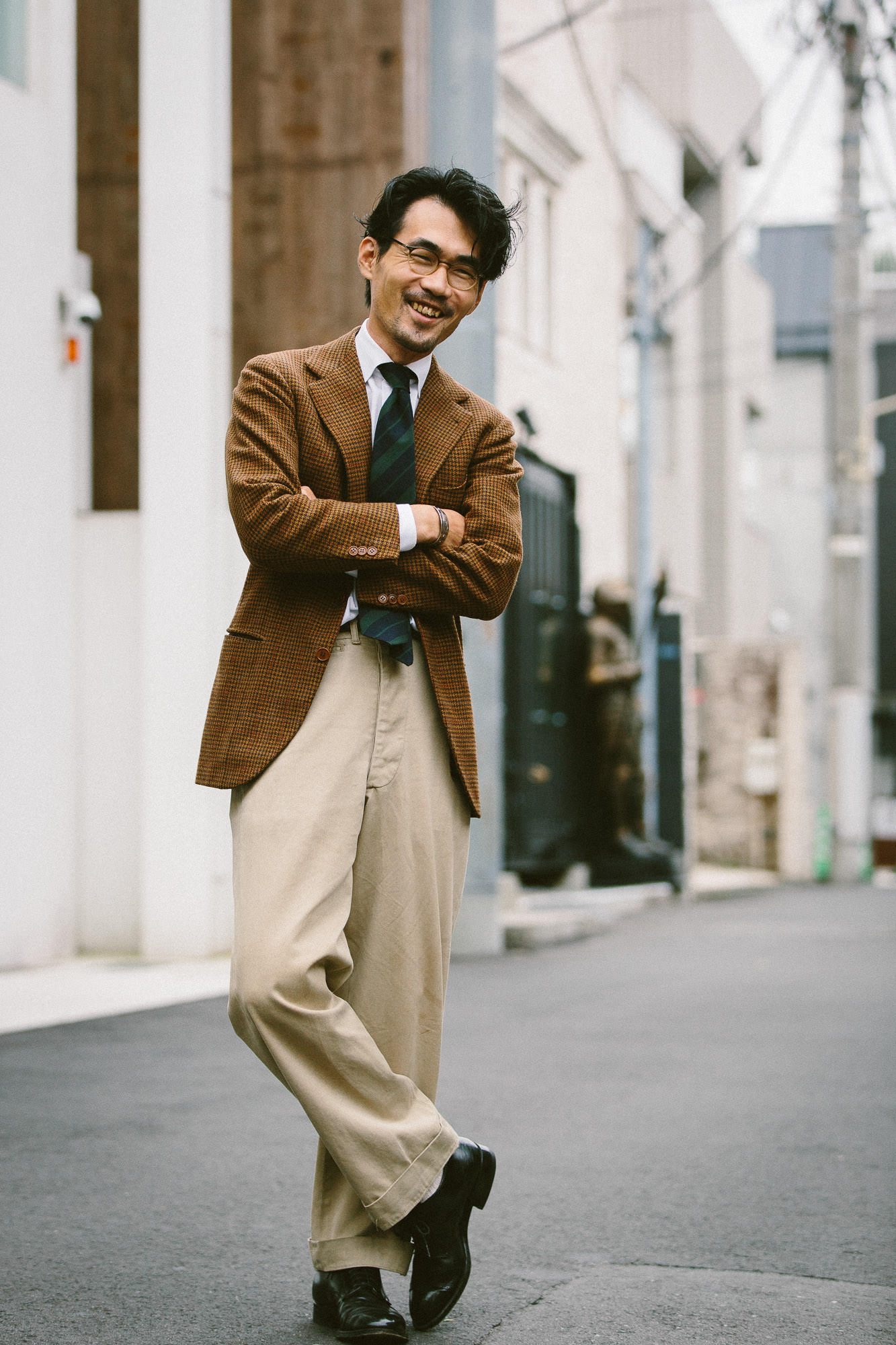 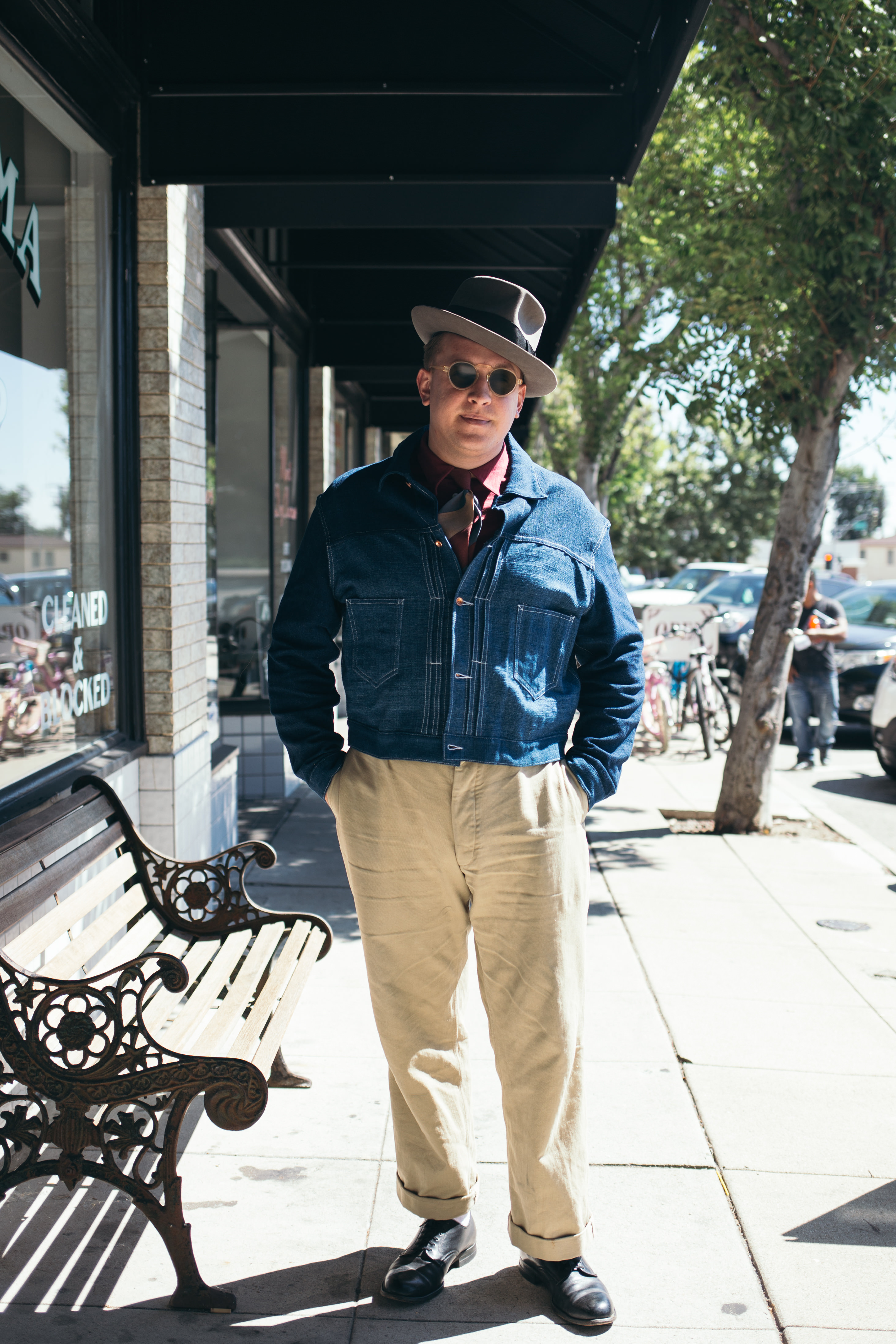 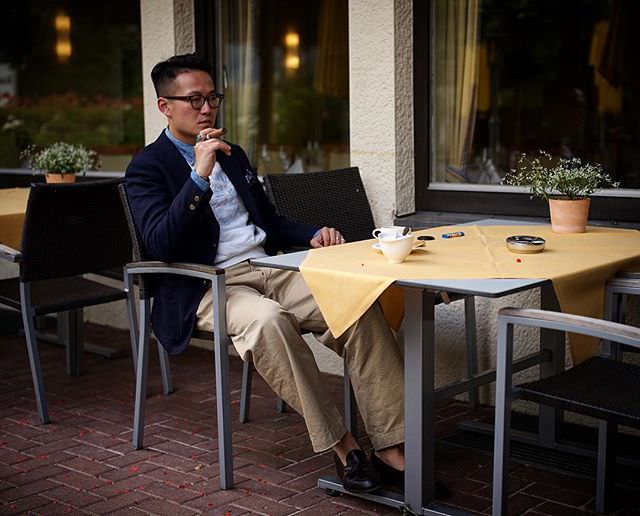 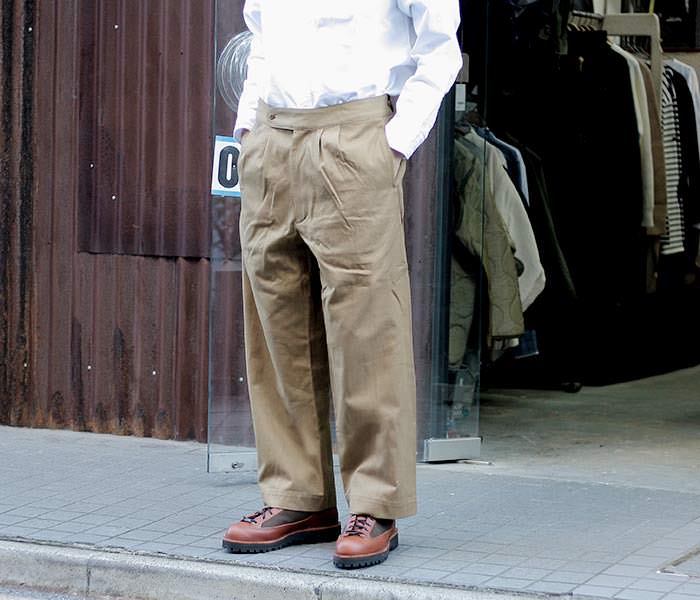 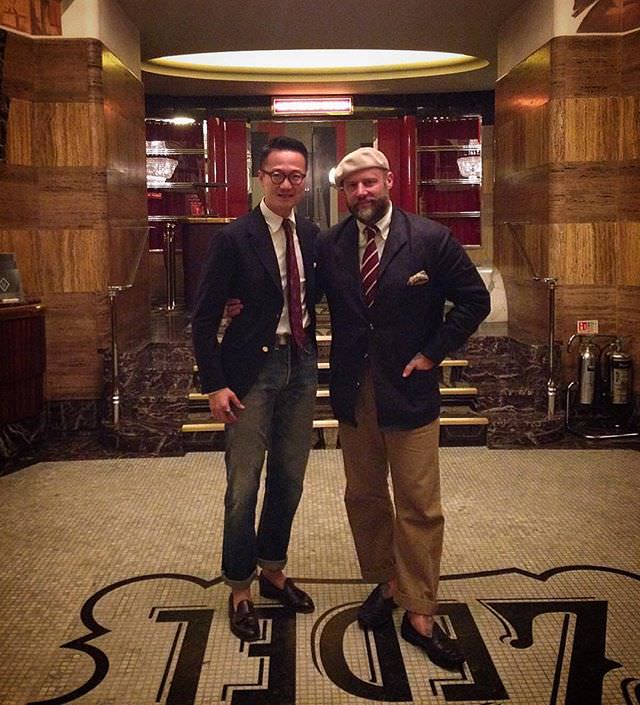 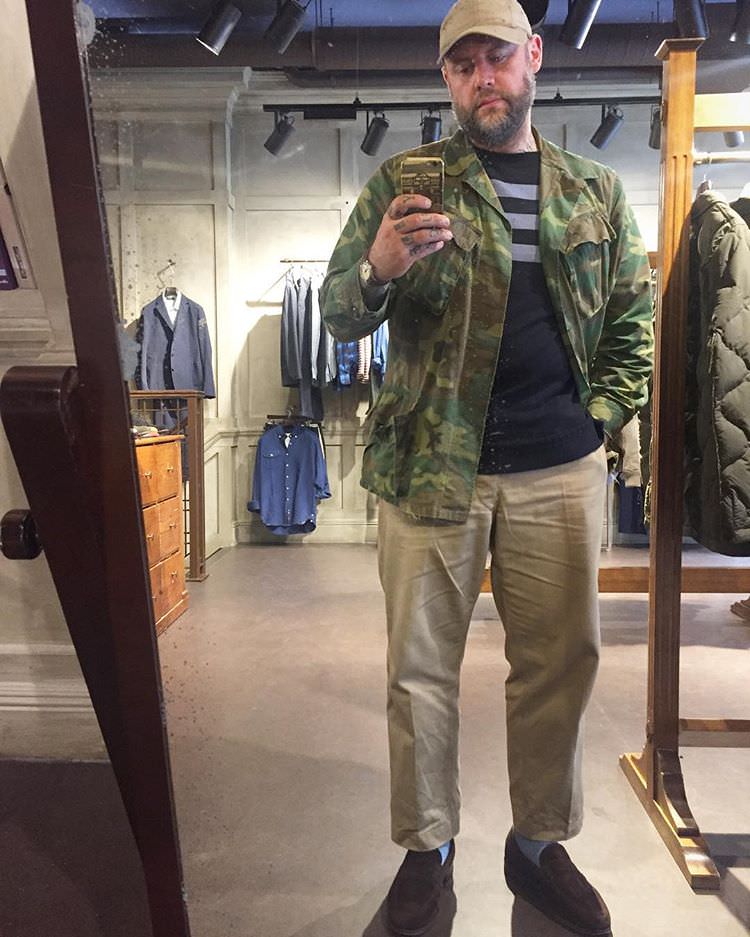 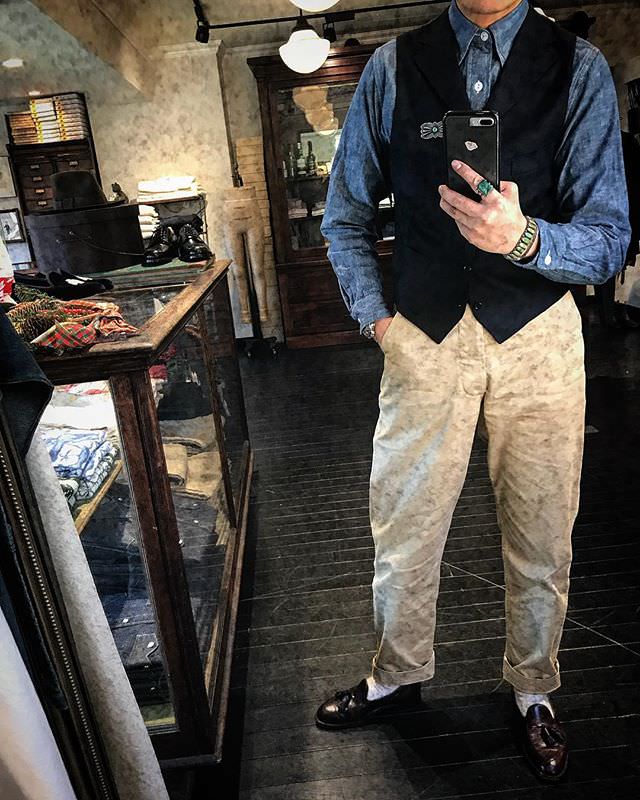 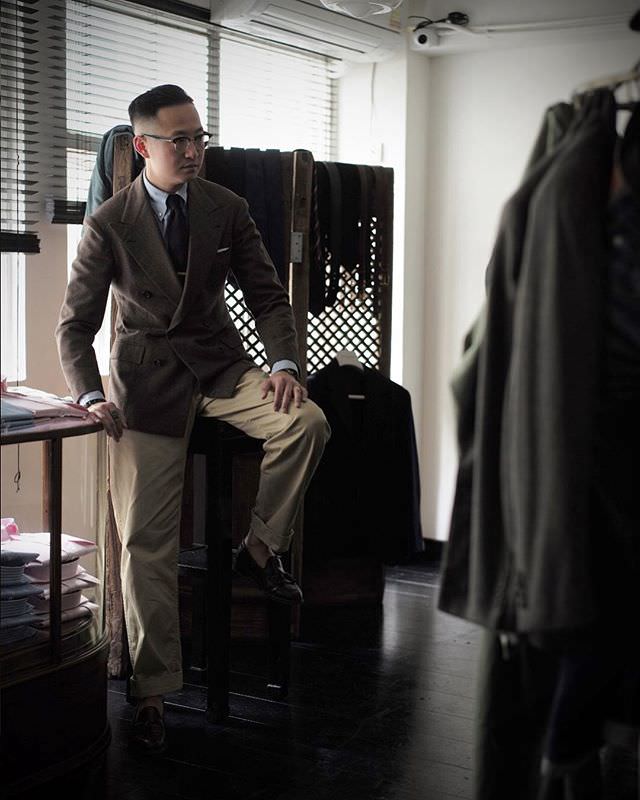 Wide legs and DB are a bold move

Now gurkha trousers are pretty hard to find. Originals go for hundreds and RTW options are usually only found by bigger fashion brands  or bespoke makers (which are also expensive).  You could try to get lucky on eBay/Etsy or try at some flea market, but in my experience, they tend to be pricey and not even available in my size.

So imagine my surprise when I saw Erik Mannby wearing a great pair of what I assumed were vintage chinos that were similar in vibe to what I was after. 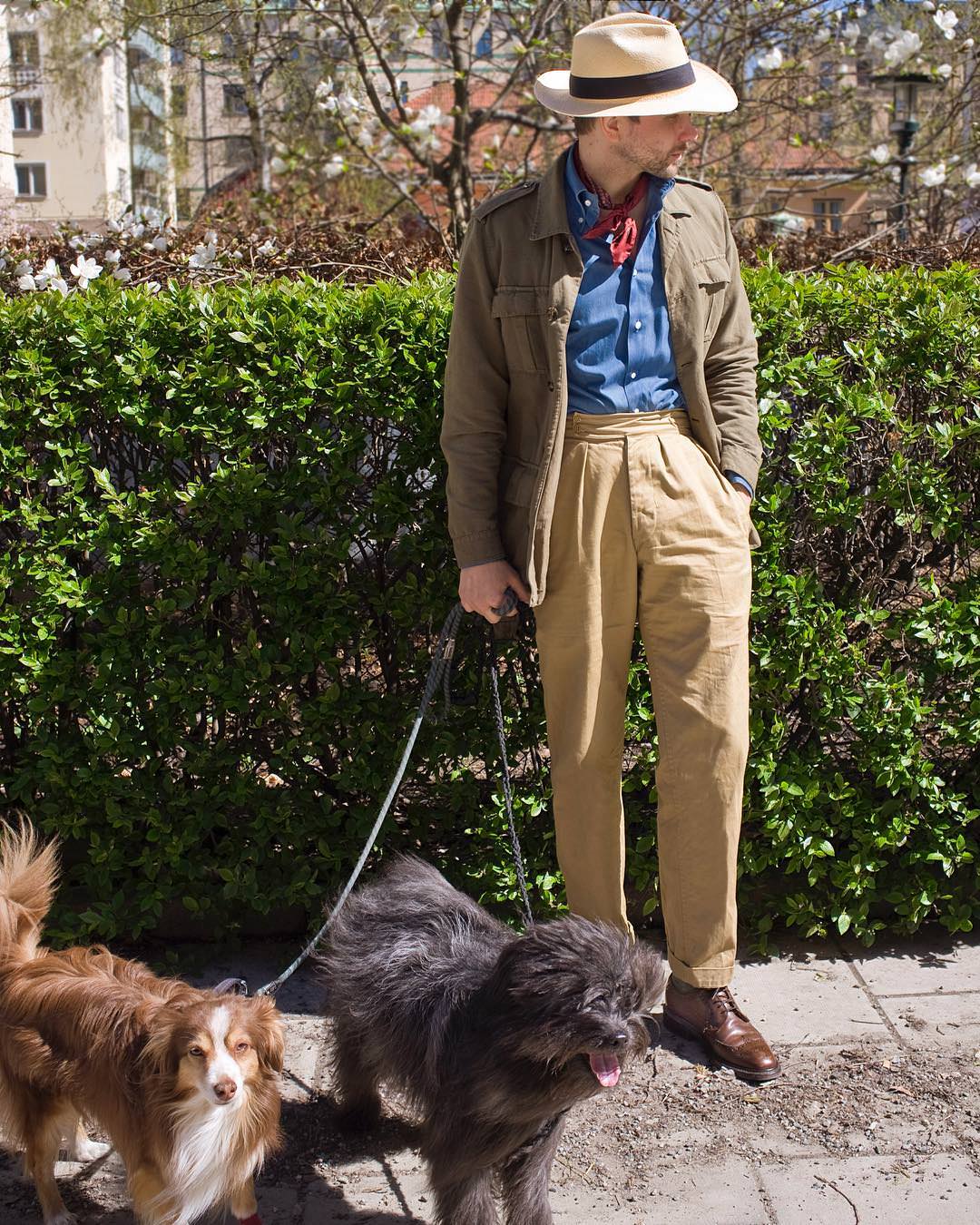 He told me that these were purchased from What Price Glory (also called onlinemilitaria.com) the military reproduction website that I got my gurkha shorts.   At first I was surprised since this is what came up when I looked up gurkha pants; they are decidedly not what I wanted.  Erik explained that these were the UK Officer Drill trousers. While they weren’t exactly gurkhas, they had a wide leg, generous pleating, and a wide waistband that featured a two-button closure and pronged side tabs.

Note that WPG is not a tailorshop nor are they a clothes maker.   They mainly do reproduction for reenactment!  As such the website is kinda wonky, with a few odd/bad product pictures.  However, both the shorts and trousers are made of 100% cotton! I ordered one pair of the UK officer trousers in a size 32 and got them in about a week.

The ONLY picture they had for the UK officer trouser. 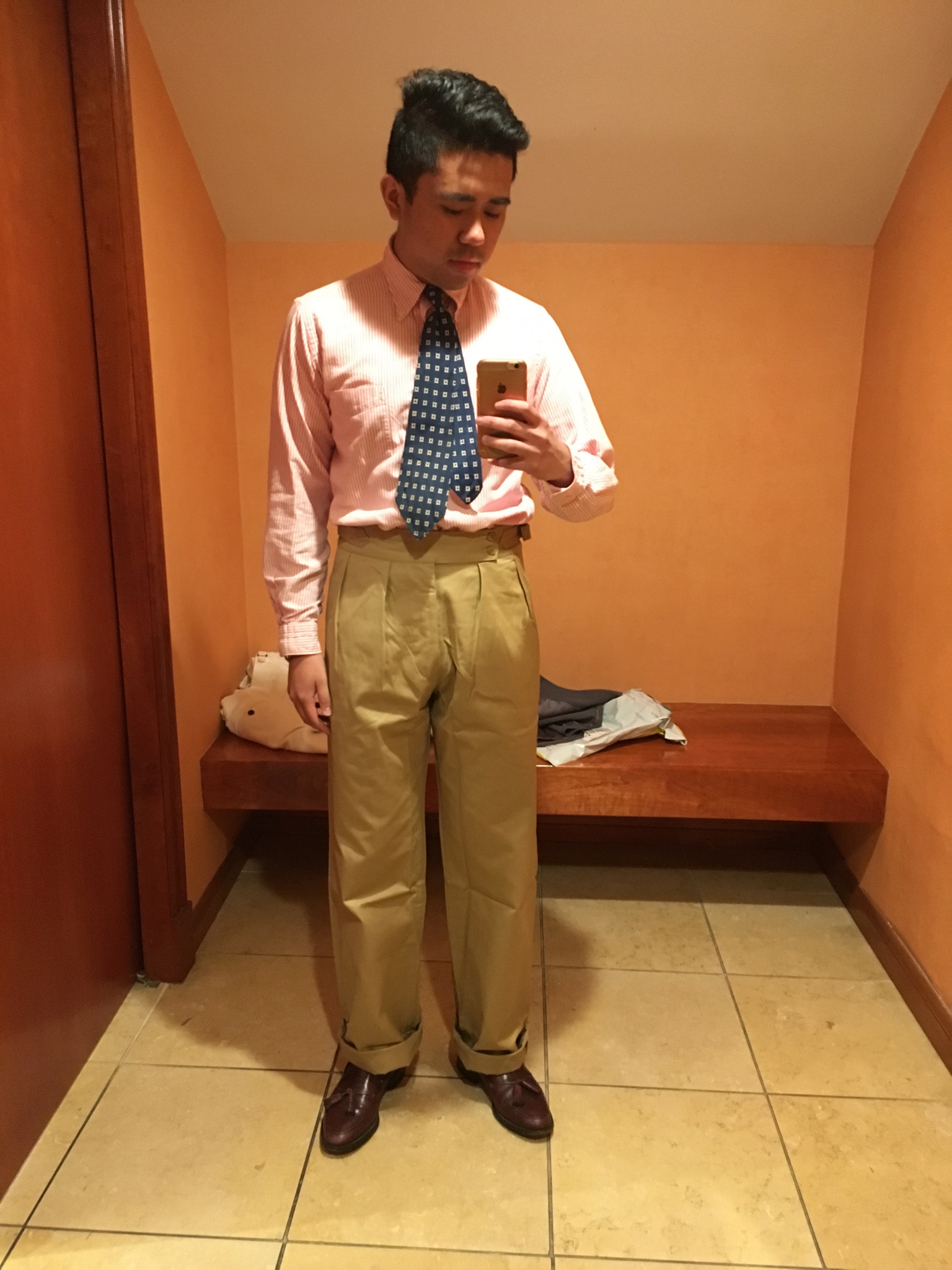 Since they only had one picture, the purchase was a bit of a gamble.  For around $60, I got what I expected: decent 100% cotton military trousers that had some cool details.   They felt pretty tough, made of a sturdy drill cotton that is definitely military. The details and the rise were good, but obviously length was an issue.  I initially wanted a pair of casual chinos that had rolled cuffs as most of mine are more on the formal side. In the end, I decided to hem them with a 2″ turn up.  I also tapered them to a 8.5″ down from their original 8.75″. Not too slim, but enough to give the trousers more of a figure.

One thing to note before moving on is that these trousers have a pronged side tab that is sharp in order to pierce the fabric.  This is in contrast to the gurkha shorts which have a prong and hole closure, most similar to a standard belt.  These sharp prongs actually do hurt and pose a potential danger to your clothes. Spencer also has these trousers and while nothing tore, they definitely snagged on his hopsack jacket during our NYC trip. 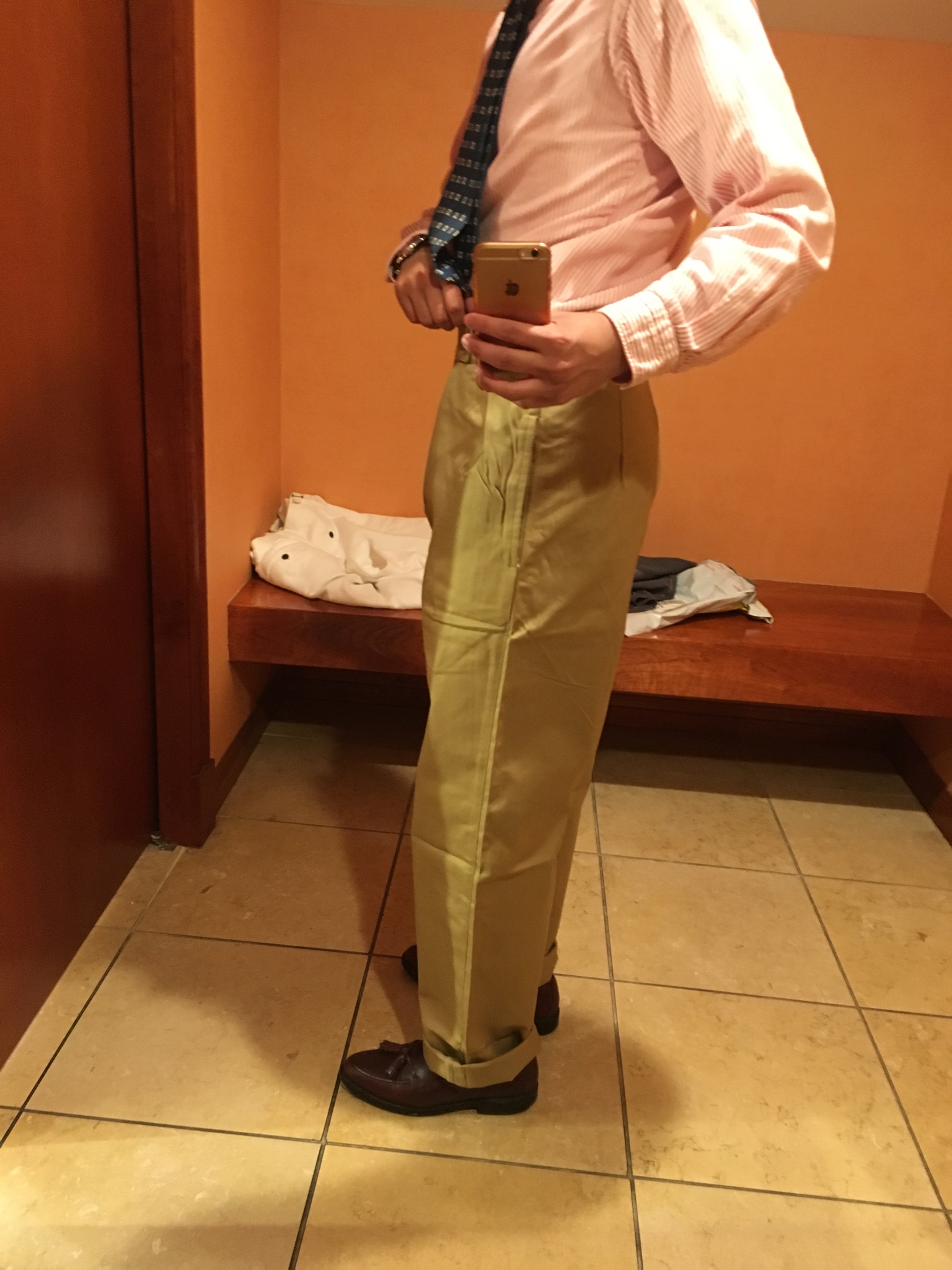 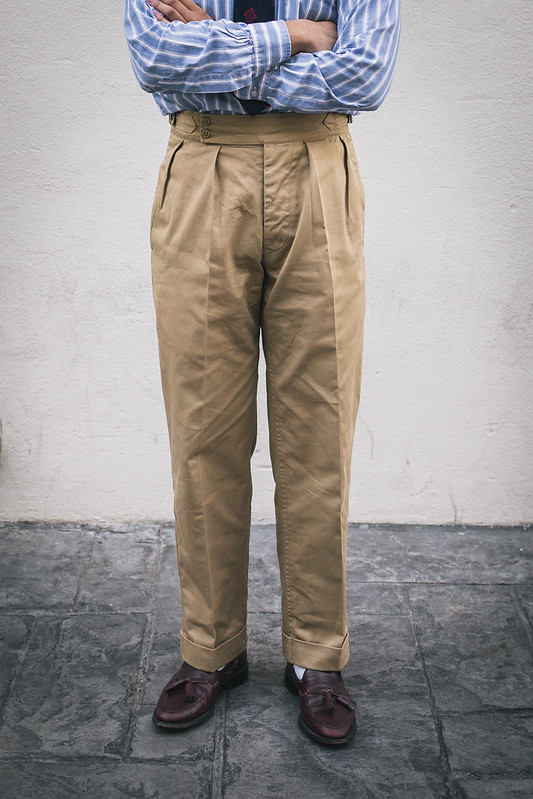 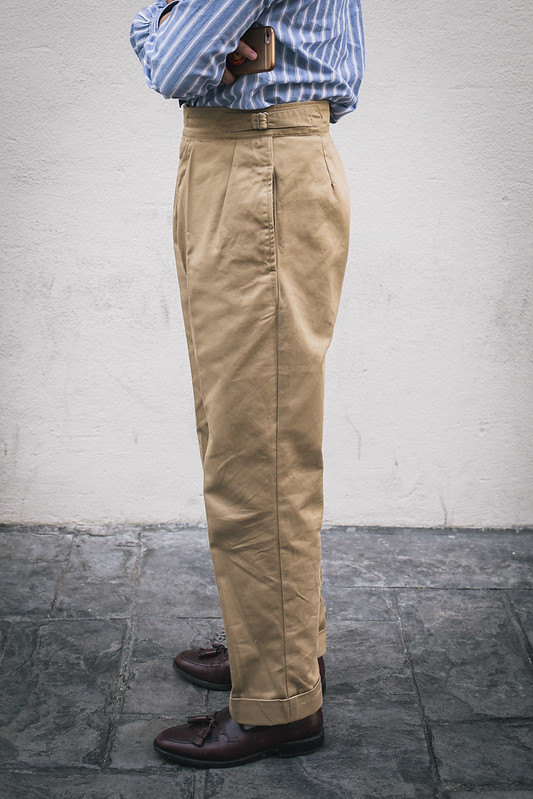 Post tailoring, I think they look really great.  The silhouette is spot on and is probably what I’d prefer for a dress trouser: wide but not super wide.  You’ll also see that I requested my tailor to remove the prong tabs and switch them for the ones you’d find on a suit.  They are more comfortable (and I can wear the trousers without piercing a jacket) but it’s harder to adjust them, as the cotton drill is thick and hard to pull through. As a result, the waist isn’t as snug as I’d like. I haven’t really had time to take them back to get adjusted, but for a casual pant, I don’t think it’s too bad. 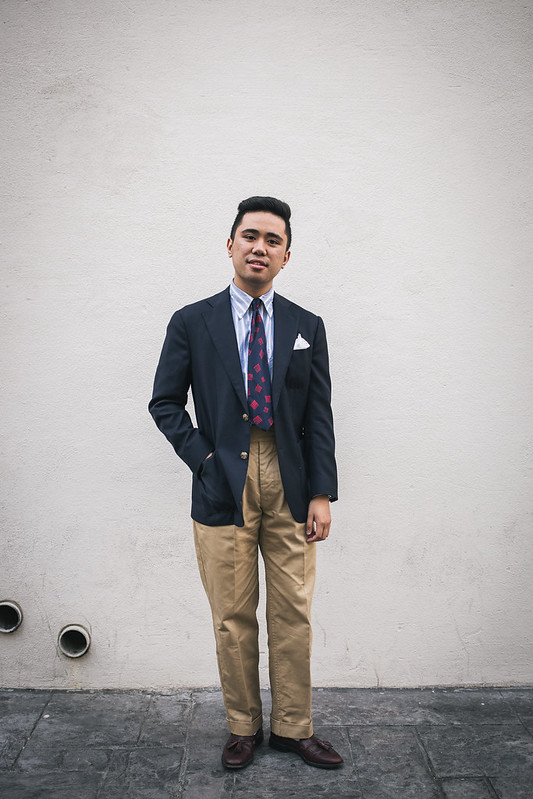 So far, they make a pretty good pair of chinos to wear with tailoring.  Due to the fabric and the fastening style, they are a bit more rugged, so they’re probably best worn with a navy sportcoat for more of that Japanese-Americana ivy vibe.  My soft shouldered hopsack works marvelously well with it, combined with a blue stripe shirt an a fun 1940’s tie.   It’s not super trad, but it’s still Ethan.

I could also see it worn with tweed as well, though nothing beats the blue blazer for me. 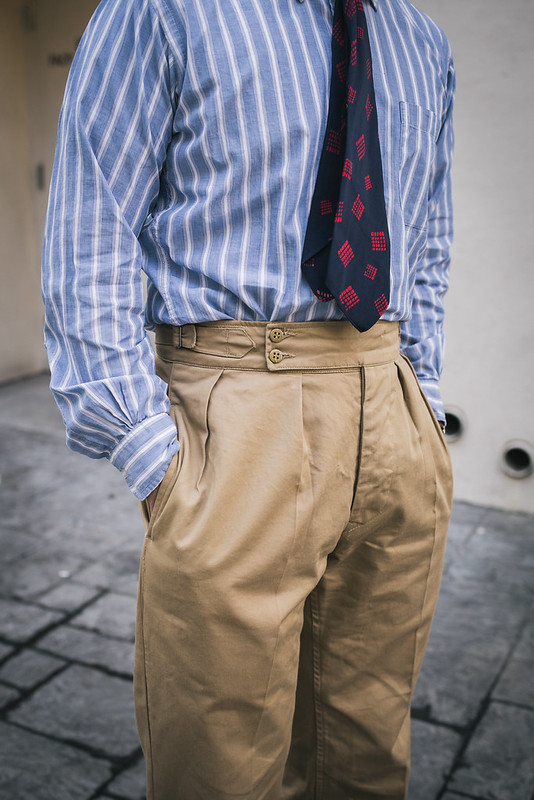 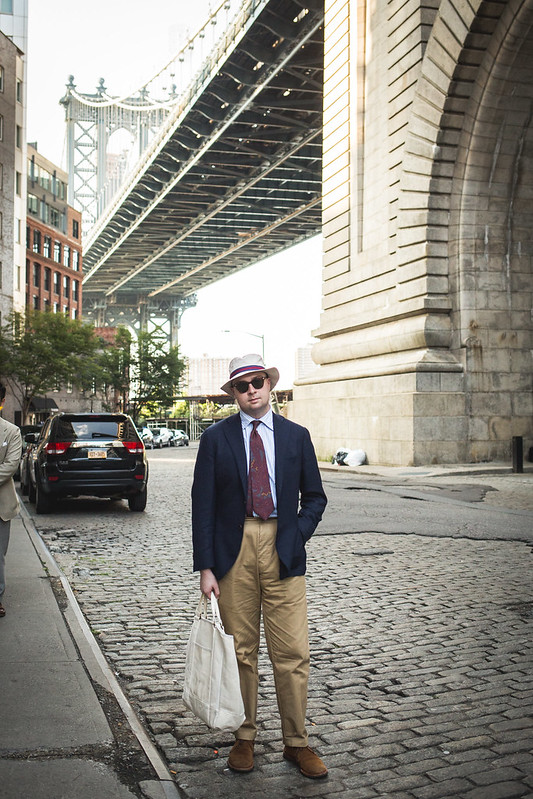 Spencer was actually the first person to get a pair and he wore them during the NYC trip! 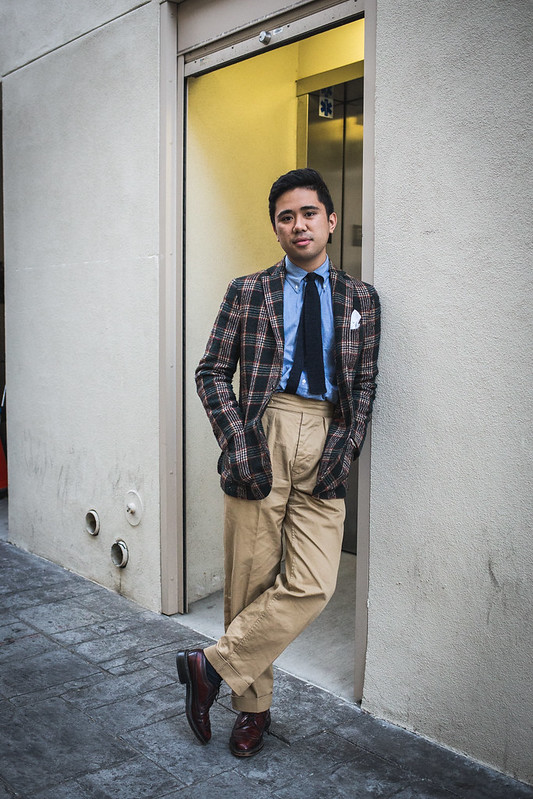 The chinos also pair nicely with more fall appropriate fabrics, like this exploded plaid on a casentino-esque fabric.  Inspiration comes more from Tony Sylvester and Brycelands, as I could definitely see them wear their wide leg army chinos with a similar plaid (but in tweed) and a USN chambray workshirt.  My interpretation obviously still leans more ivy or school boy, but that’s simply due to the limitations in my own wardrobe.  At least I kept the chambray shirt!

I think I actually prefer this outfit over the more straightforward school boy one since it’s a bit toned down (no striped shirts or patterned ties) and as a result, looks more contemporary. Derbies were used instead of loafers just to differentiate this outfit from the previous one. 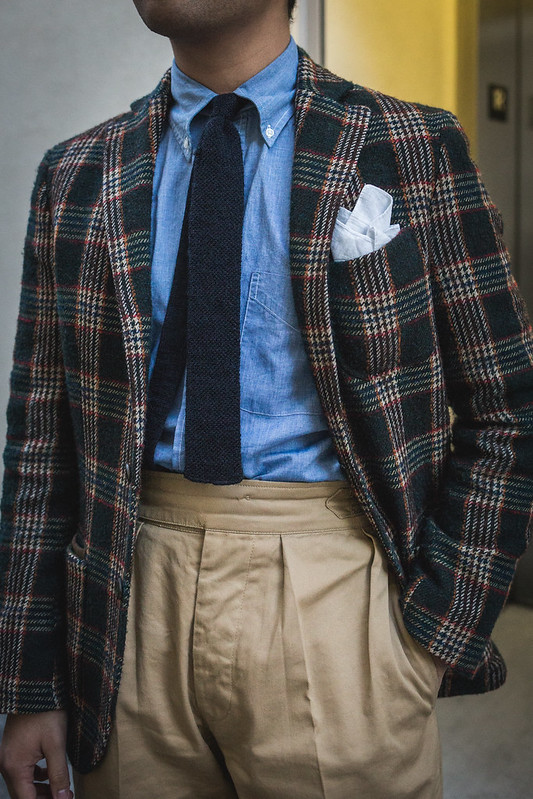 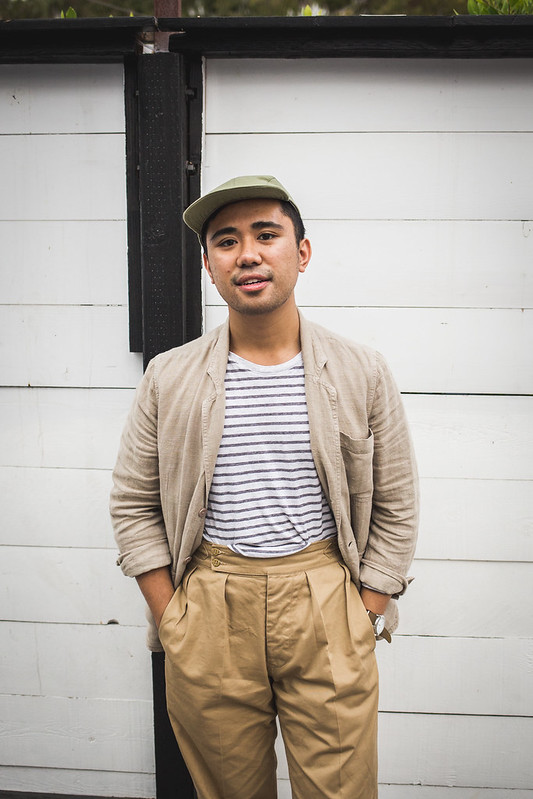 The main reason I got these trousers, as I alluded to earlier, was to have a pair of chinos that looked great casually.  I never liked wearing tee shirts with belted trousers, so these (and by extension the stoffas) were a no-brainer.  Plus it has more of that Japanese vibe that has defined my casual style this past year.

I knew it would look great with a blue chore coat but I liked the challenge of wearing it with my french linen chore blazer. The tan on khaki makes for a “mismatched suit” that I’ve done a few times already.  It’s slouchy and perfect for transitional weather.  Instead of a button up, I opted for a striped tee; the olive engineer cap was added for even more casual vibes as a way to lean into the Japanese style. 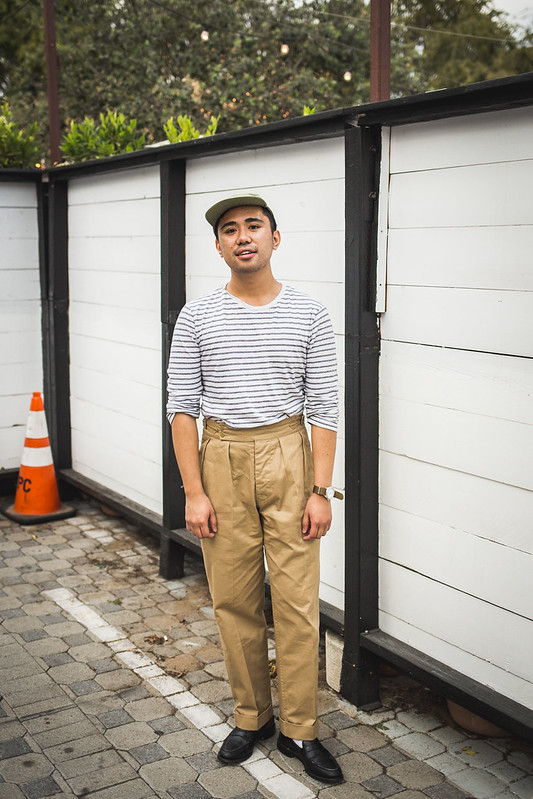 I think it looks great!  White sneakers or brown loafers would have been a better choice than the black pennys though. I was trying do that khaki + black combo that is popular among the Japanese guys. Kosuke of Clutch Golf does it well here (though his tan is light). 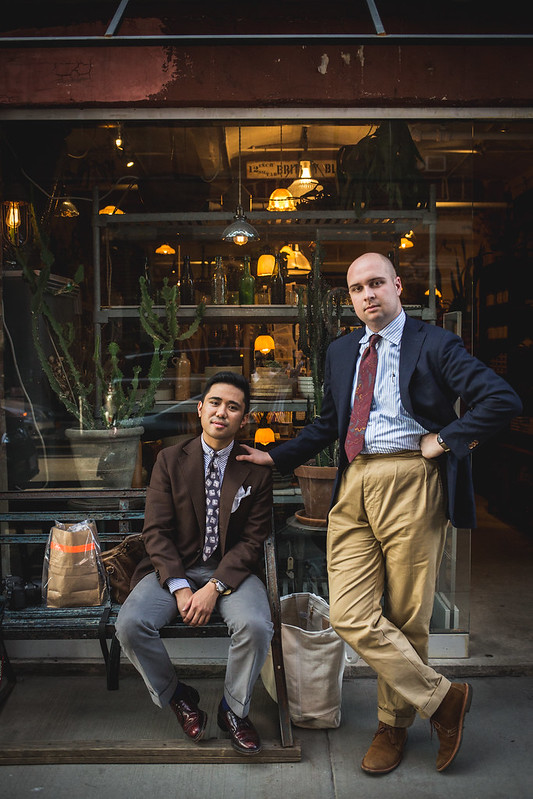 For the price point, I think they’re pretty decent pants despite the alterations.  I mean where else are you going to find side tab khakis with an extended closure for $60?  The closest I could think of is custom from Luxire (I believe chinos are under $100) but I’m really hesitant about doing custom clothing without talking it through a sales rep or measurement specialist first.   In any case, I’m happy with the ones I got.

Obviously they’re a little bit different than the regular chinos you might see, but that’s the point. The wider leg, high rise, and generous forward pleats allow it to have a more rugged, military vibe that works well with both Ivy and straight forward Japanese-Americana styles.   The side tabs are the winner for me, since they allow me to wear tucked in tees with ease.  This feature makes them a versatile pant, ready for any semblance of “smart casual” and “straight casual” wear.  Plus getting them in a wider cut makes for more interesting combinations instead of the traditional straight leg chino.  The guys in the inspiration section really do it well.

GIve these UK Officer Trousers a try if you’ve been wanting to experiment with more gurkha esque trousers.  I do like that they are more rugged compared to a worsted pant, which make these repros from WPG perfect for experimentation.  Just remember to get rid of those prongs!