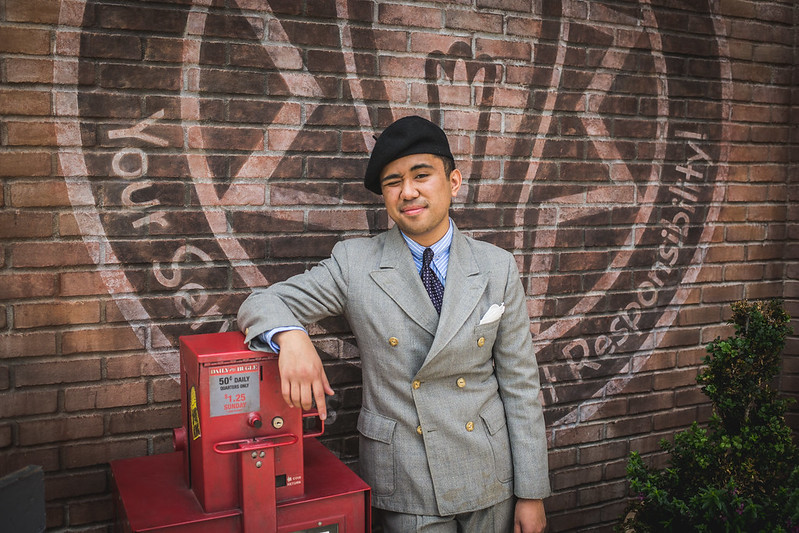 Yes, you heard that intro correctly; this was basically our last Dapper Day at Disneyland event.  Let me explain.

So for a long time, Dapper Day was the only menswear (or fashion) event that LA had that was accessible for everyone.  I mean there are probably Supreme parties, tiny trunk shows, LAFW, and trade shows, but they were always populated by a select few.  This meant you’d have to be a celebrity, work in the industry, or be an influencer.  Then there were vintage events, but they were mainly lifestyle and most of the guys I knew were mainly about the menswear rather than the swing dancing, jazz, and barbecues.  Then Dapper Day came in.

Justin Jorgensen, the founder of Dapper Day, took something innocent like Disneyland and made it special, simply by encouraging people to dress up.  There weren’t really any rules to it: you could be vintage, you could be modern, you could be couture.  The tag line simply said to “step out into the parks in style”.  And that’s what we did!  Obviously I went in vintage inspired for my first Dapper Day and as I grew to expand my style, I dabbled in true vintage.  While other vintage people began to be turned off by the amount of “modern dressers” (some even bemoaning the inclusion of more abstract/contemporary styles), I was energized.  It was just nice to be around people who liked style, even if it was for a bi-annual event.

Spencer and I were noted for our style, since we opted for full vintage suits instead of simply wearing a bowtie and suspenders.  During this time, Disneybounding (dressing like a Disney character with normal clothing) hadn’t fully caught on, so most people had more personal style.  However, we noticed that the tides were slowly changing, as cosplayers and bounders had slowly taken over the feed of the event, despite insistence by the founders that this was about style, not costume.  This later lead to the creation of the Dapper Day Museum Events at LACMA and NHMLA, which we really love since it separates Disneyland from the ideals of dressing up.   Again, before The Bloke and Wellema, these Dapper Day events were the only places that celebrated style among LA residents.

While personal style (in normal clothes, not inspired by a character) has been dwindling, it’s  no the reason why we have decided to stop going.  The answer is in our dwindling group.  When I first attended, I had a giant group from my college. Sure it probably helped that most of us had Annual Passes to offset the cost.  Later it became more vintage focused, meeting up with people in the vintage community; then it was mainly about documenting general style and starting to get traction with readers of the blog.  Unfortunately, this past Dapper Day was just Spencer and me.

Now this doesn’t mean that we don’t have fashion friends (in fact, we’ve made so many more just in this past year), but it probably means that our priorities are changing. Almost all of us are finishing up college and getting jobs; I myself work a full time job.  Our friends and I don’t really want to spend $120 to spend an entire day walking around in hot clothes and to wait hours in line for rides (that are still fun).  Plus, it seems almost repetitive, since we simply ride our favorite rides, take a few pictures, and go home. Without a fun group like in years past, it’s not as exciting.

So perhaps it’s time to move on.  I already mentioned this in the last Dapper Day post, but I thought it was best to revisit it in this one especially since we’ve decided that this past Fall 2018 was going to be our last one.  But that didn’t mean that we were going to skimp out on our outfits! 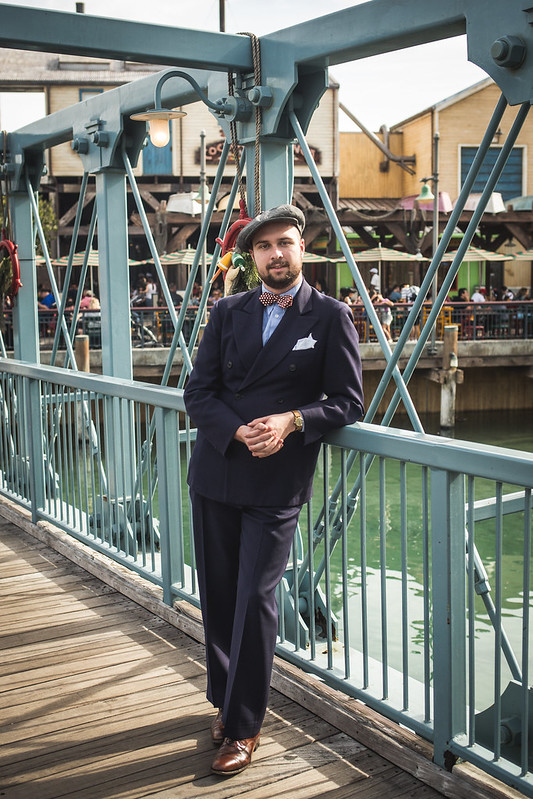 Spencer wears his 1940’s blue micro stripe DB suit. It’s definitely a classic and a piece that is definitely more subdued compared to previous Dapper Days, like the time he wore the tan Palm Beach suit or his summer separates from this past spring.  The dark, solid suit represents a bit of a shift with our personal style, as we tend to prefer separates and rugged ivy (see Drake’s) for daily wear and something a bit more conservative (see The Armoury) for suiting.  Gone are the dandy days! 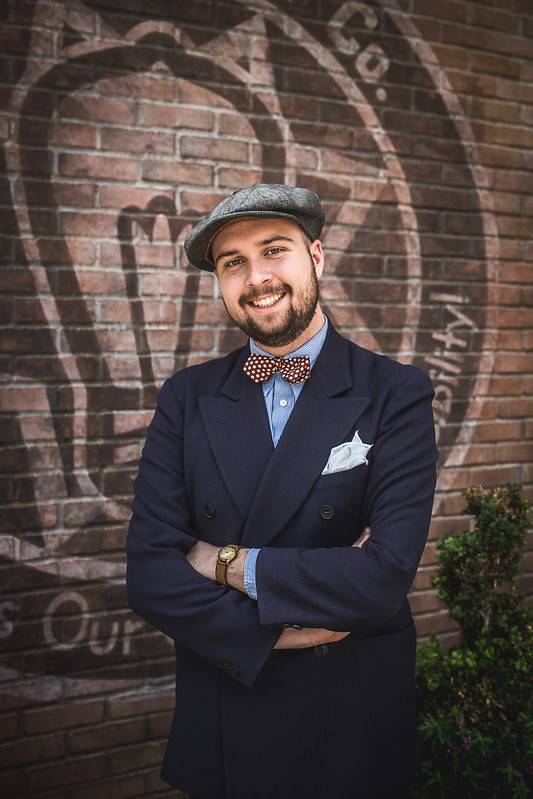 While a navy suit and a blue stripe spearpoint is not a huge surprise, Spencer did make the unexpected move by going with a bowtie.  Like I’ve noted in the hyperlink article, bowties are eccentric and help make a vintage look in a more obvious way than just a striped shirt and a patterned tie.  Spencer’s look echoes Ethan Newton and Winston Churchill, though instead of a 3-piece, he echoes the “high closure” (needed for bowties) with a DB.

Lastly, he adds in a chambray cap from Monsivais Co. for good measure. 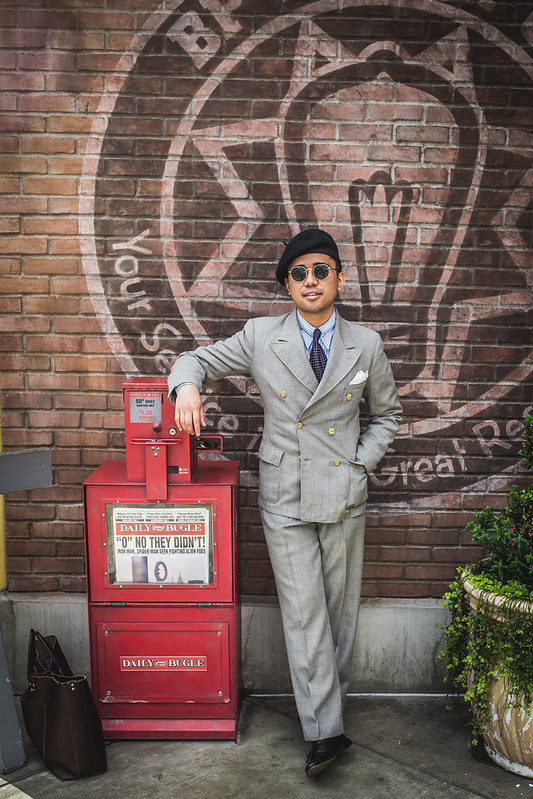 Like Spencer, I also wore a (mainly) solid DB.  To emphasize the “end of an era”, I decided that this was going to be the last outing of this 1930’s DB belt back suit.  Famous for its inclusion in my Articles of Style interview, it was one of my first vintage suits, purchased on eBay for around $40; the seller either had no idea what they had or people thought it was smaller than it actually was.

It appears to fit rather well, but I find it a bit too slim for my taste. For one, the armholes are really high and the sleeves are trim (I should stop working out!).  I already had the buttons moved over a bit for more room in the body and the trousers were already let out and let down to the max.  The staining does bother me a bit, but overall, I think it’s time to let someone else enjoy this suit!  It’s very elegant (not many people wear light grey suits) and serves as a great example of mid 1930’s tailoring: narrow shoulders, horizontal peaks, high buttoning, short jacket length, and wide/semi-flared legs.

Adding the beret ads some European flair that I’ve obviously been digging this year.  It’s different than the flat caps and fedoras you normally see! 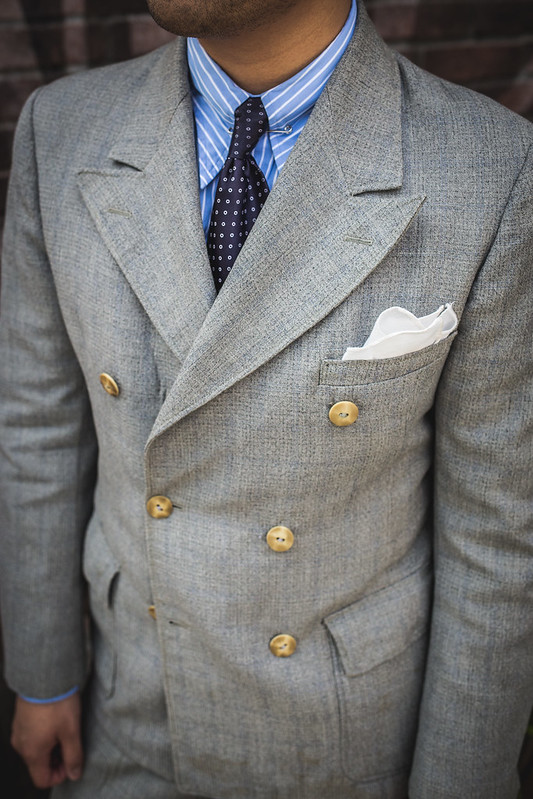 My outfit is also toned down in comparison to previous years (remember my wild brocade) but it’s definitely the classic Ethan we’ve come to know, especially thanks to the pinned blue stripe spearpoint and the navy silk dotted tie.  The amount of blue also brings out the extremely subtle blue windowpane in the suit!

I’m particularly proud of this spearpoint, since it’s something I’ve developed at Ascot Chang. It’s basically the same shape as the ones from Natty Shirts (a cheap custom service) but with a few adjustments like a higher collar band.  I’ll probably write about these in the future, but it’s awesome that I now have a fully bespoke “Ethan shirt”.  You can technically get these as a customization when you place a bespoke order at Ascot Chang.

I don’t have any street style pics or a lot of silly stuff because it was literally just Spencer and me. So enjoy the few dumb pictures that we actually got to take! 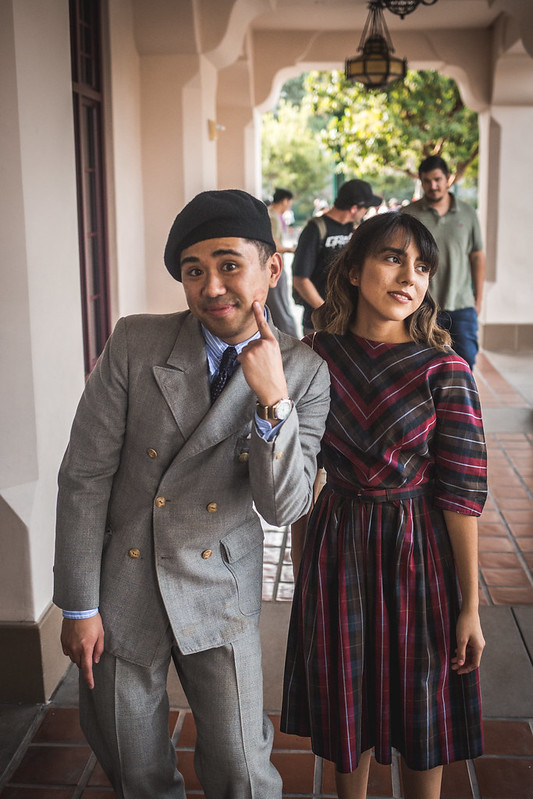 My girlfriend puts up with me. 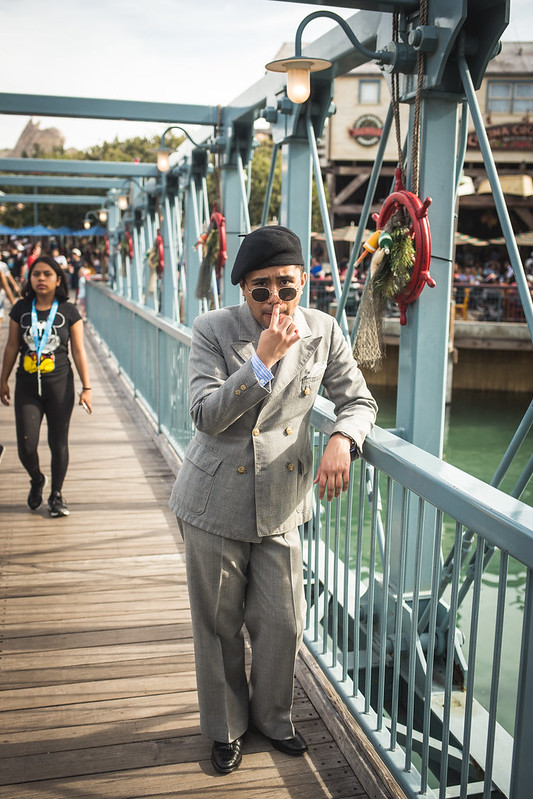 The girl’s face says it all. 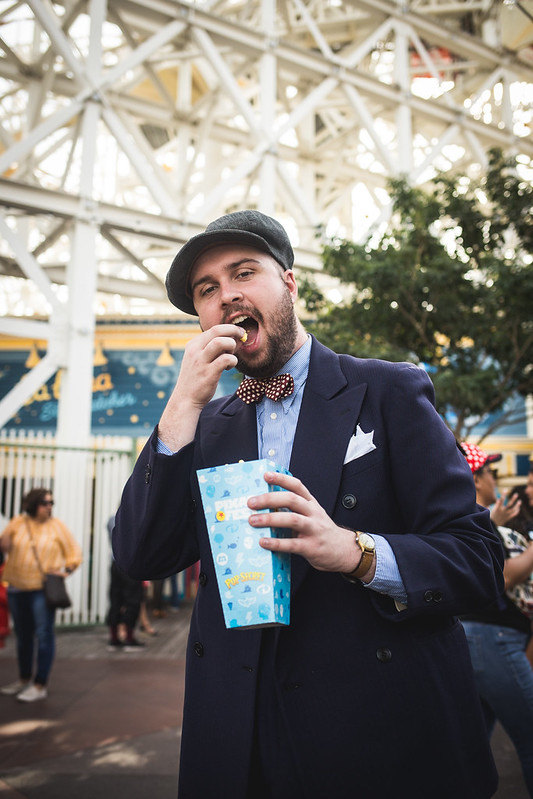 Did you guys know that popcorn is Spencer’s favorite snack? 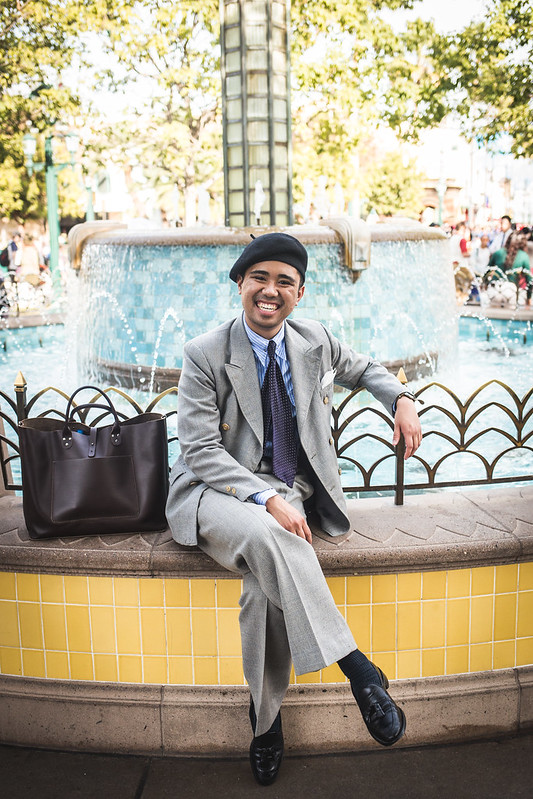 The “Ethan Tote” from Clark and Barba will launch soon…. 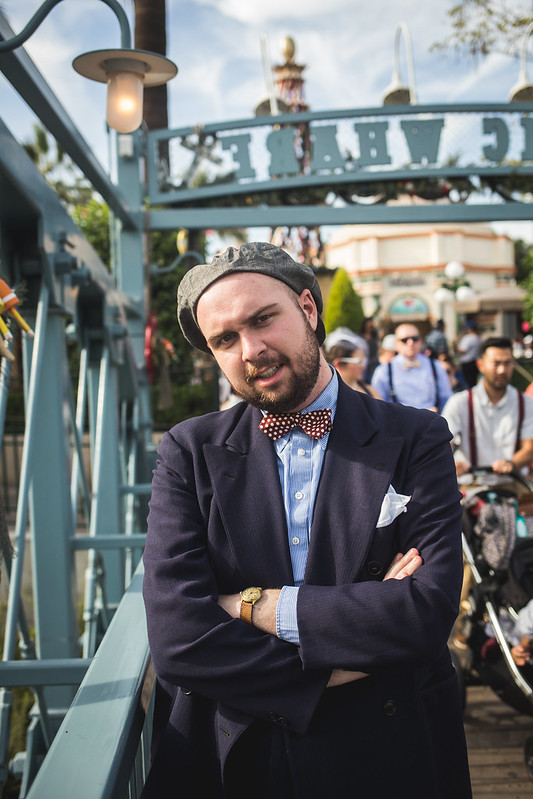 Don’t get me wrong; Spencer and I still love Disneyland.  It’s a fun place that celebrates some of our favorite movies and characters!  We’d just rather go on a regular, less crowded day wearing more comfortable, casual clothing (I don’t think I’ve been to Disneyland in shorts since I was a child).  We also still love Dapper Day. I think it’s great that people have a chance to dress up at a fairly “normal” place and have fun with style!  Until we get a big group of people willing to get the Sunday off and spend the money on a park-hopper, this will be Spencer and my last Dapper Day for a while.

Thankfully, like I said earlier, Dapper Day has expanded to just doing an outing at Disneyland! There’s stuff at LACMA and NHMLA thats definitely for the local LA crowd.  Plus, the Dapper Day Expo has gotten bigger each year with it’s own entertainment and seminars! In fact, that’s probably where you’re going to see Spencer and I from now on since it’s more accessible to people ($10 for the weekend). Most of our friends just go to that!

Even if Dapper Day at Disneyland isn’t for you, there are even more non-Dapper Day menswear events that you can go to!  For example, The Bloke just had a great party and is starting to organize trunk shows that inevitably turn into a great hang. It seems that Dapper Day has started this trend and has acted as a great stepping stone to foster the menswear community in Southern California.

We’re not completely saying goodbye to Dapper Day (as we will be at the Expo and the museum events), just to the Disneyland ones.  Even though it’s fun, it can get pretty draining and lonely, when it’s just Spencer and me.  Perhaps in the future, we’ll be able to get a big group together and make a grand return to the Magic Kingdom.  For now, we’ll rest our blistered feet and simply watch the ride POVs to get our fix.