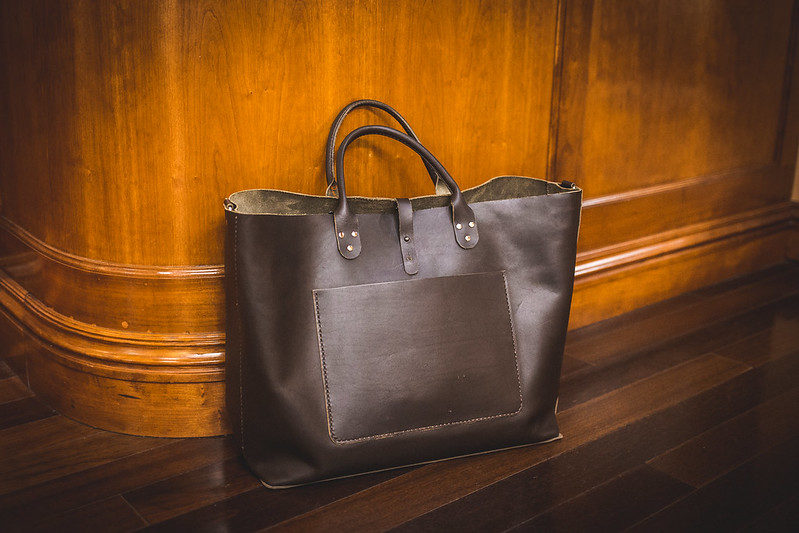 So I partnered with an LA leather maker and designed a leather tote so I wouldn’t have to bring my damn canvas bag everywhere.

Long story short, I love the bag and you can get one too! 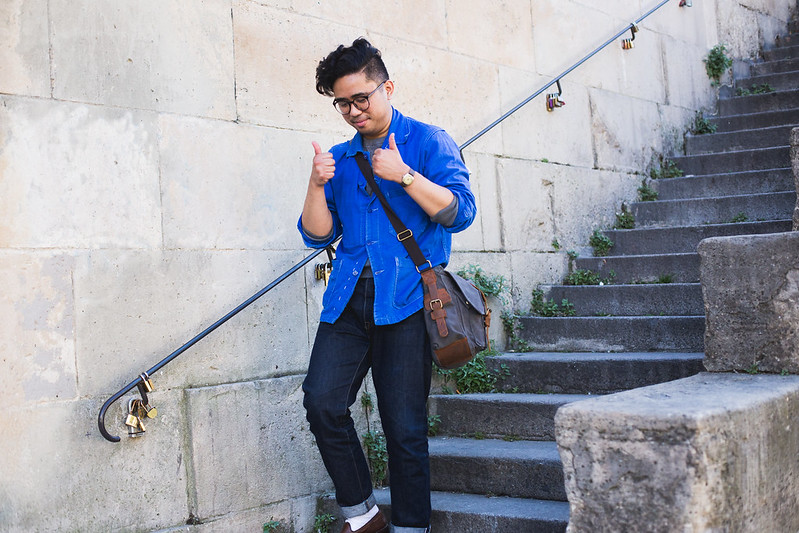 Walking along the Seine.

As a photographer and writer (with a small addiction to social media), I always have a bag with me.  It’s something I carried over from my college days, as I found myself either writing or editing pictures wherever I went.  Waiting for my friends at the boba shop? Better break out the laptop.  Meeting up with Spencer for thrifting? Might as well bring the camera and take pics.

I’m also the kind of guy who likes to be over prepared, though it’s probably due to my own hubris.  I always bring an extra pair of contacts/glasses in case the ones I’m wearing dry out or fall out.  Extra camera batteries and cards, just in case I forget to charge or import pictures.  I bring a baggie of Advil for potential headaches.  A book in case I feel inclined to read. And a power bank, USB, and laptop charger because my phone and laptop batteries are so old (but I don’t to upgrade them).  Combine all this with the aforementioned camera and macbook and you’ll see why I need a bag. 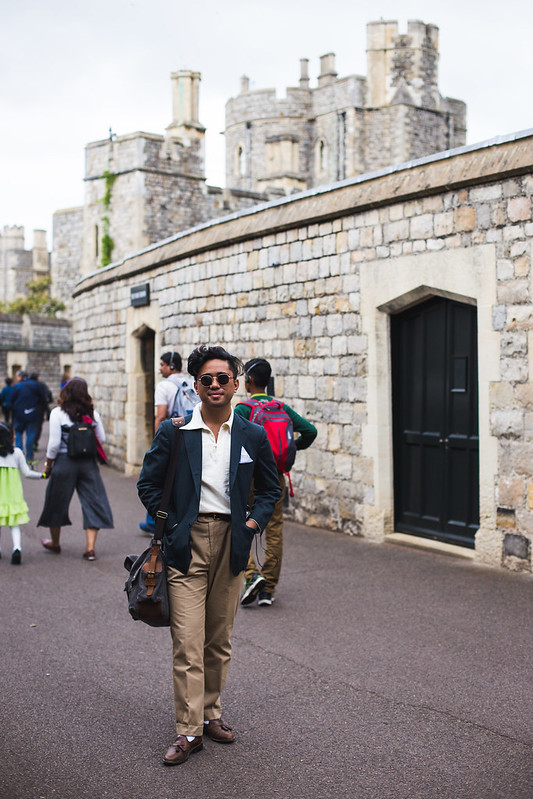 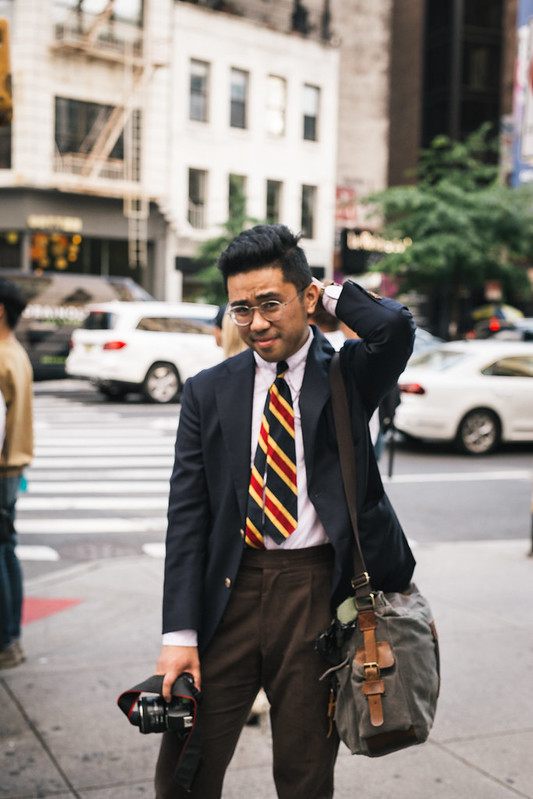 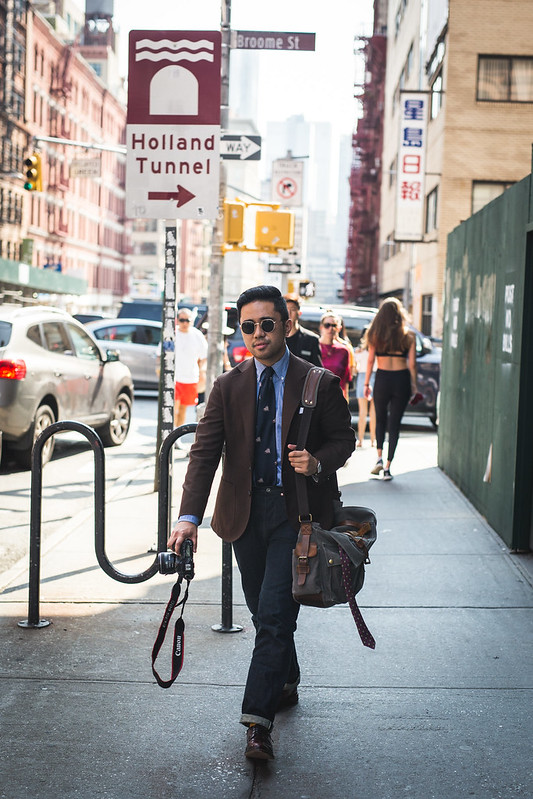 Naturally, my bag of choice was a canvas messenger bag. In high school/college it was an olive green one, inspired by Indiana Jones (or the Hangover?).  In college, it was a fake leather one from Call It Spring.  And for grad school and now, it was an Amazon Kattee bag.  But while a messenger bag can carry what I needed, it wasn’t “smart enough”. I’m probably being a bit shallow, but I never liked the idea of having a canvas messenger bag worn with tailoring.  Sure it was fine for working at the office but not so much for walking around NYC or being brought to a party.

It was clear that I wanted a tote bag. 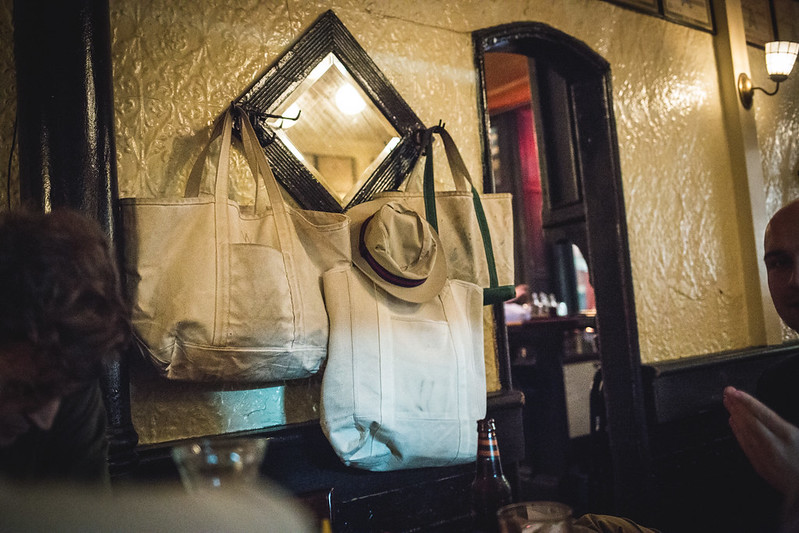 So tote bags have are an interesting subject in menswear. Firstly, they are further into the “purse” real than any other bag; even guys who prefer messenger bags/satchels over backpacks aren’t immune to this phenomenon.  I don’t want to say that I was too self conscious, but it did turn me off for a while.  That and the fact that tote bags don’t really have “protection” for valuables; the charm is that you kinda just throw your stuff in, and I didn’t want that for my laptop and camera. 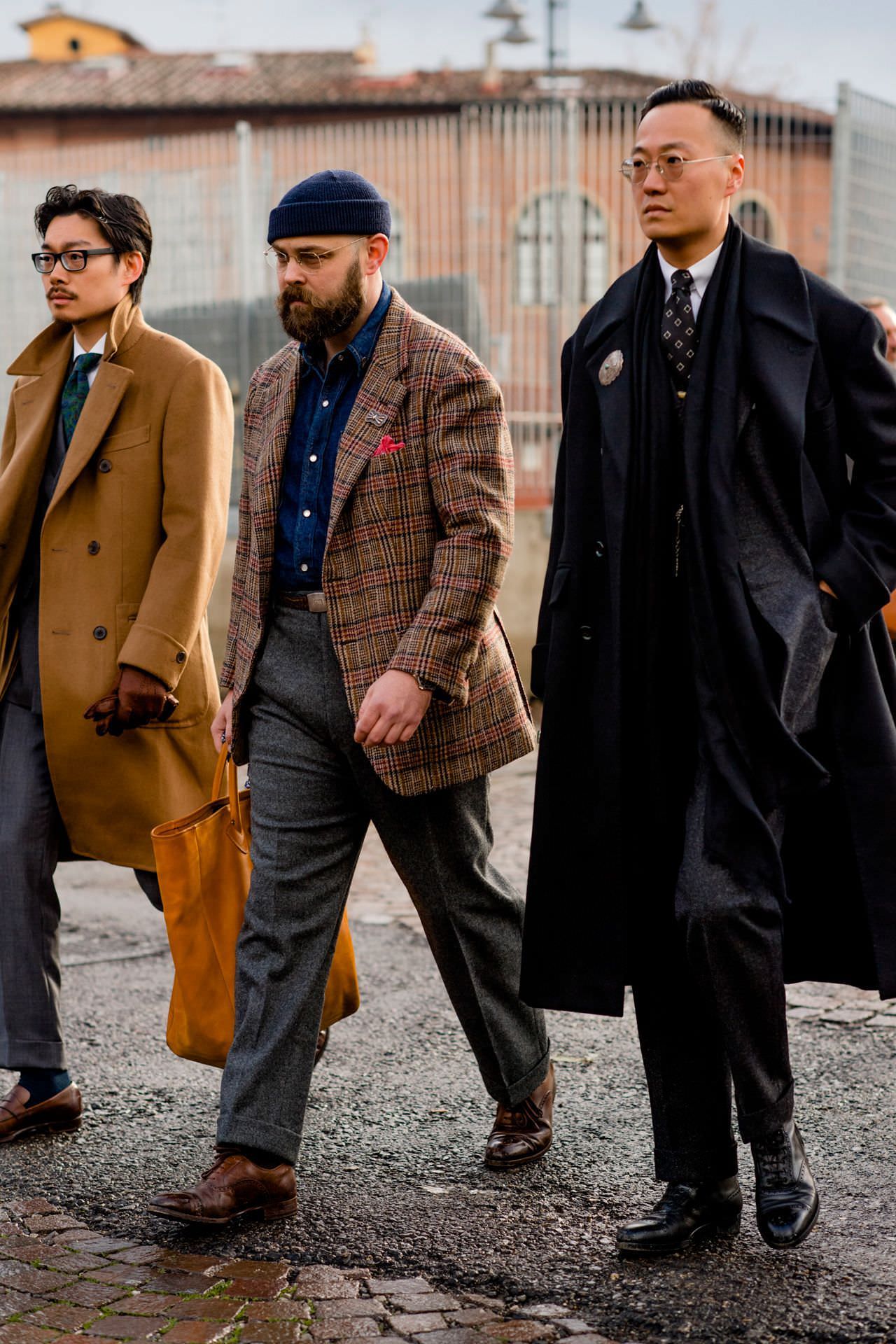 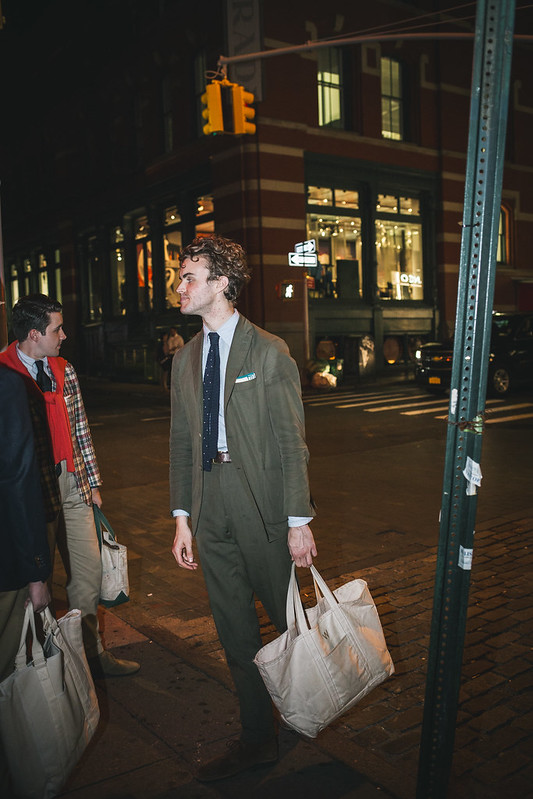 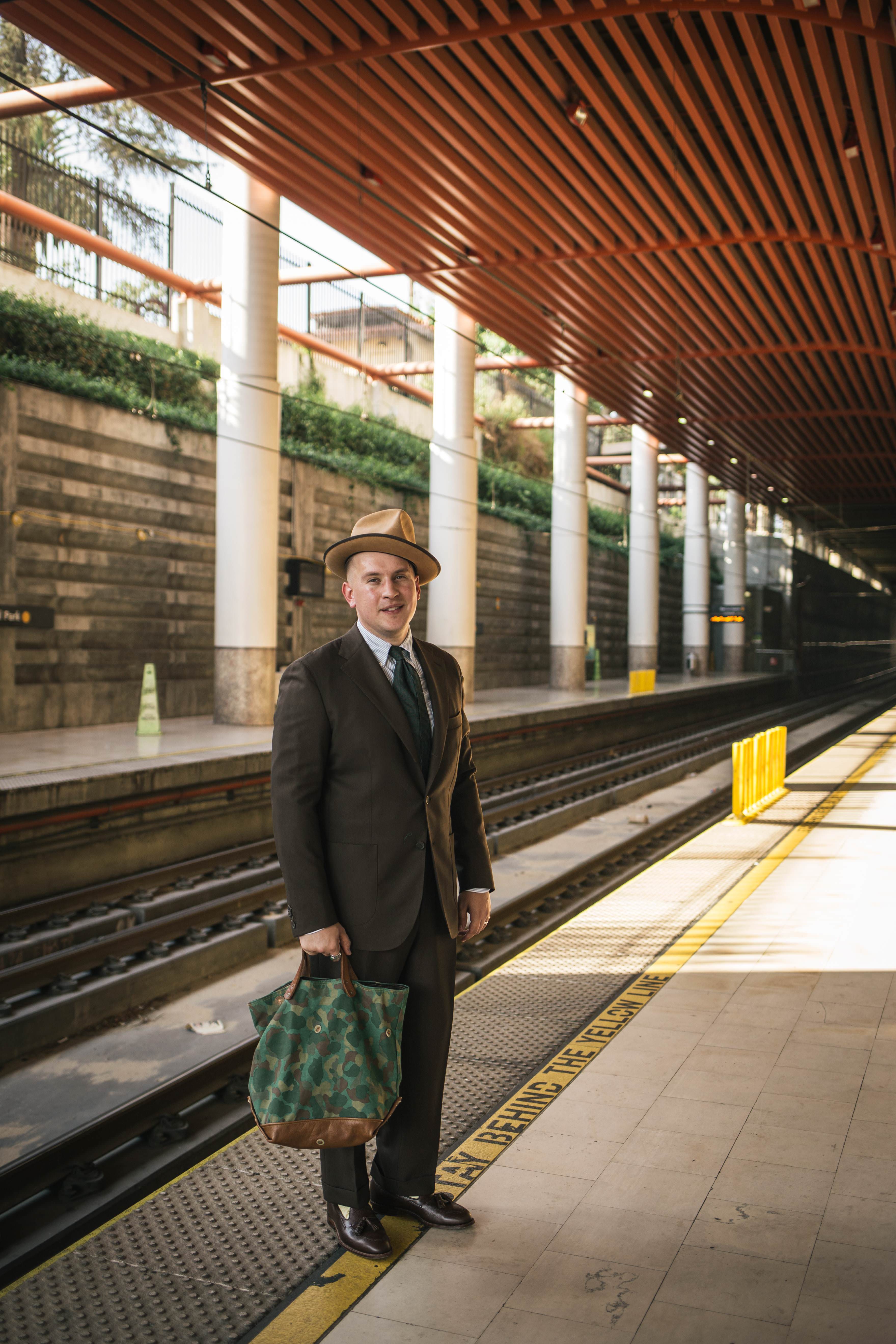 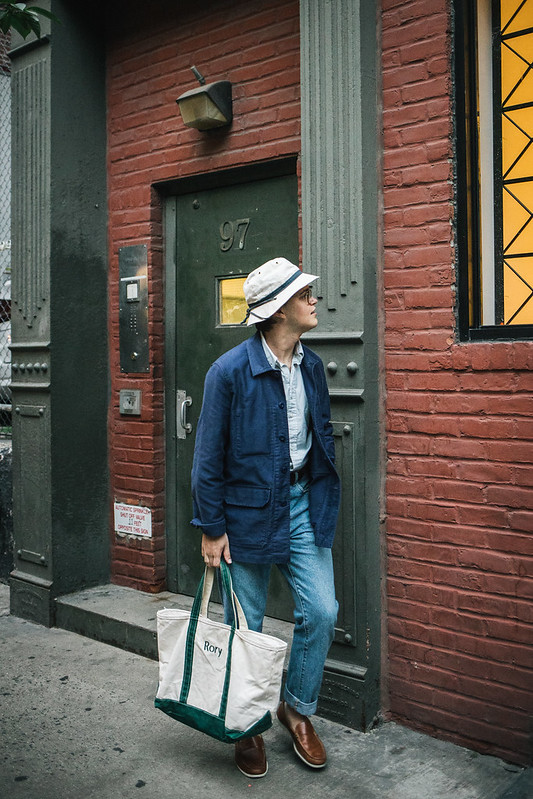 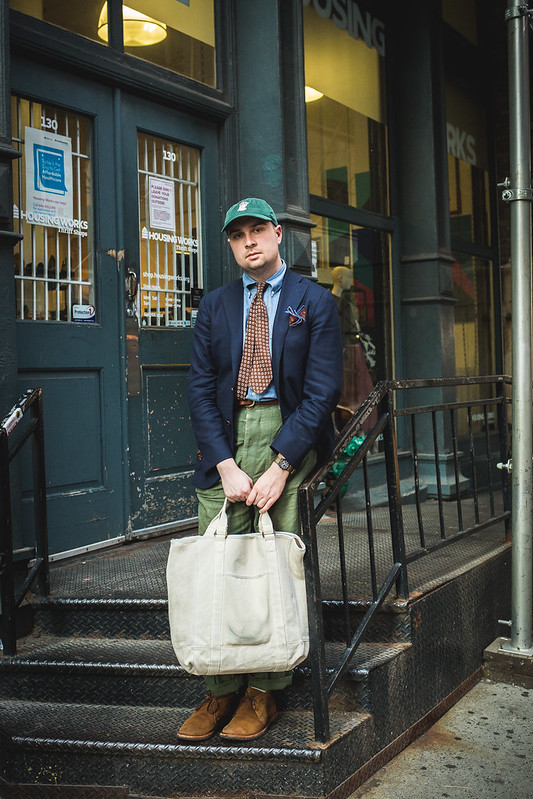 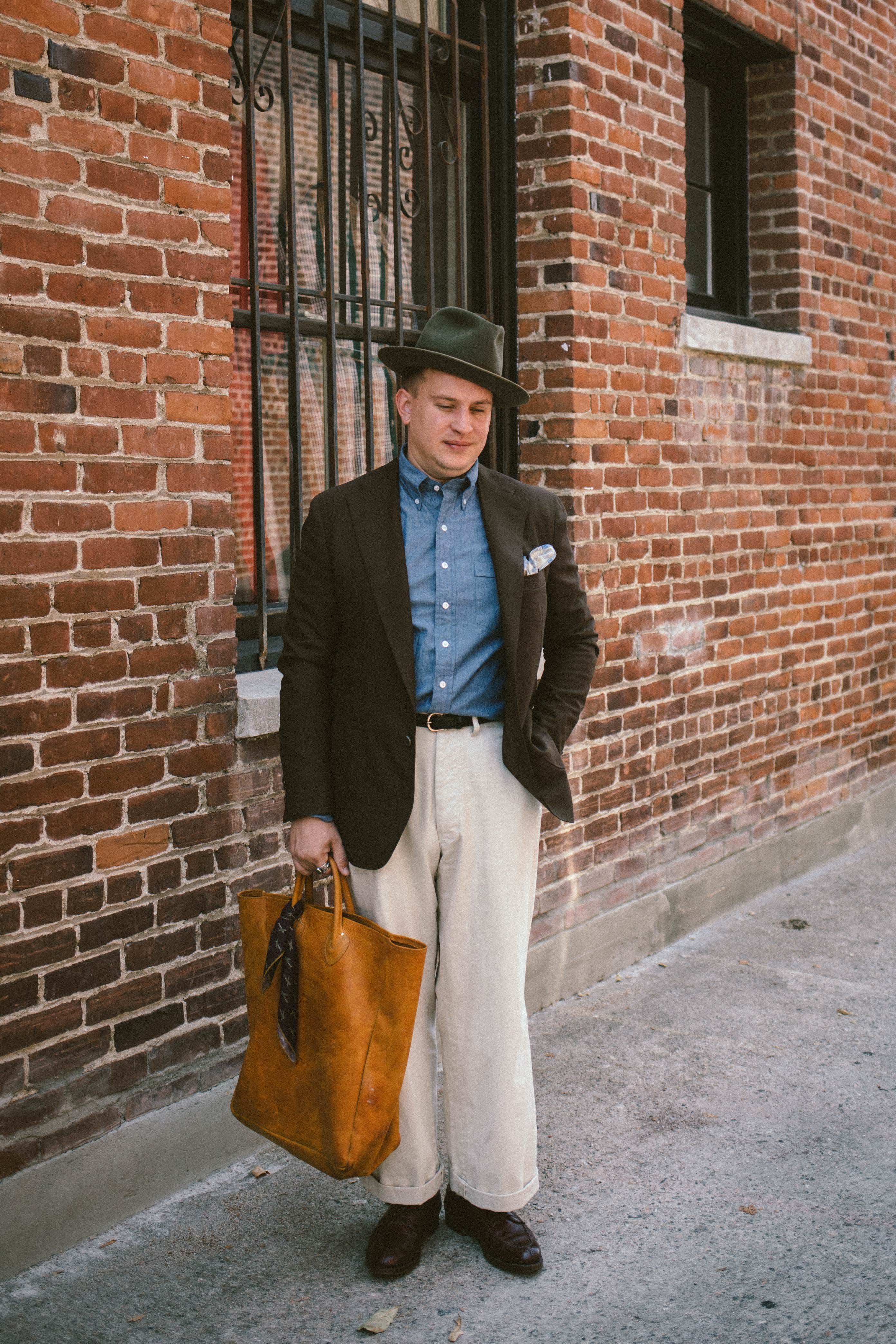 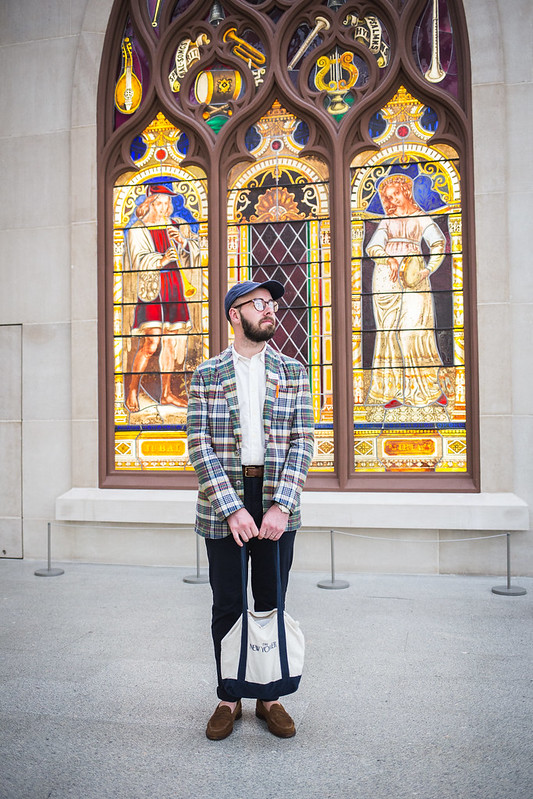 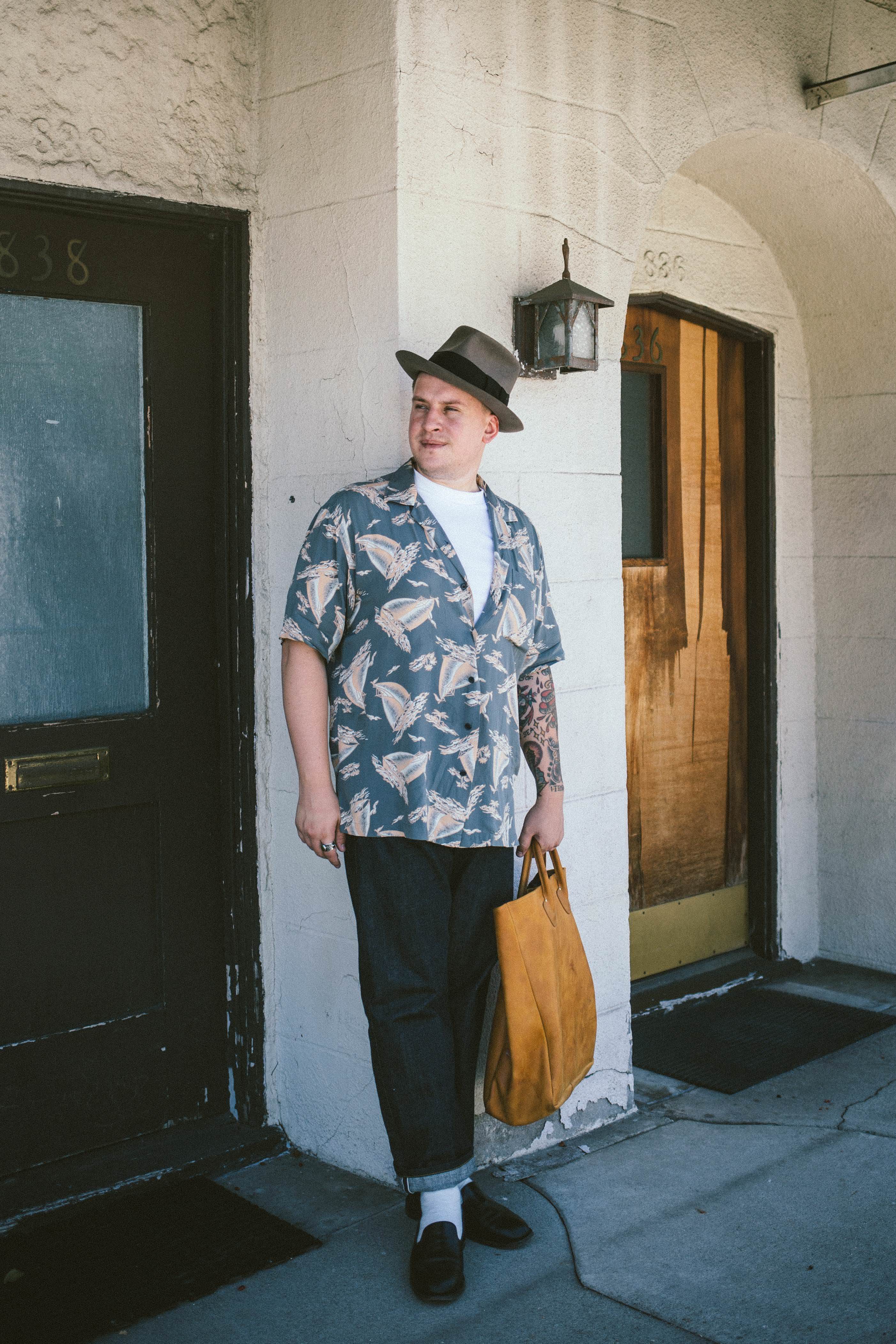 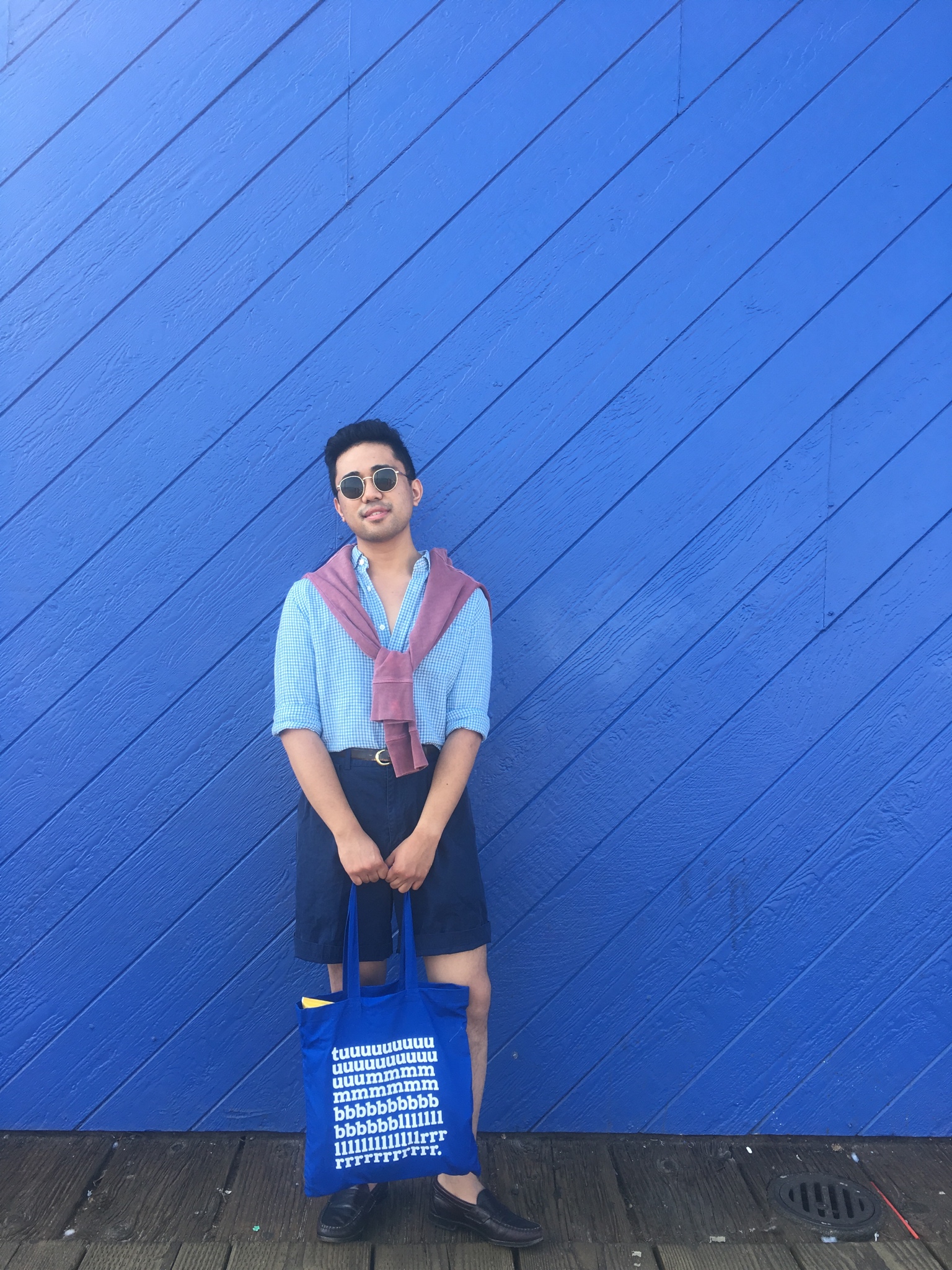 I don’t know if it was the Mandela effect at work, but I eventually started seeing a lot of tote bags making their way around the menswear world.  Specifically, this was among the young guys, whether it was the vintage totes of the Drake’s crew or the Bryceland’s leather ones rocked by the Anthology.  When I was in New York, I got to see this much more in person as most of our friends and colleagues used tote bags to carry extra shoes, books, food, and sweaters.  In a sense, it was utilitarian; they weren’t wearing fashion backpacks as propelled by the Menswear Youtube crowd. It probably has its roots in the neo-prep/L.L Bean scene, but I could also saw it rocked by my fellow Angelino hipsters when grocery shopping or perusing a flea market.   It seems that the tote was something that worked with both sartorial outfits and casual outfits. 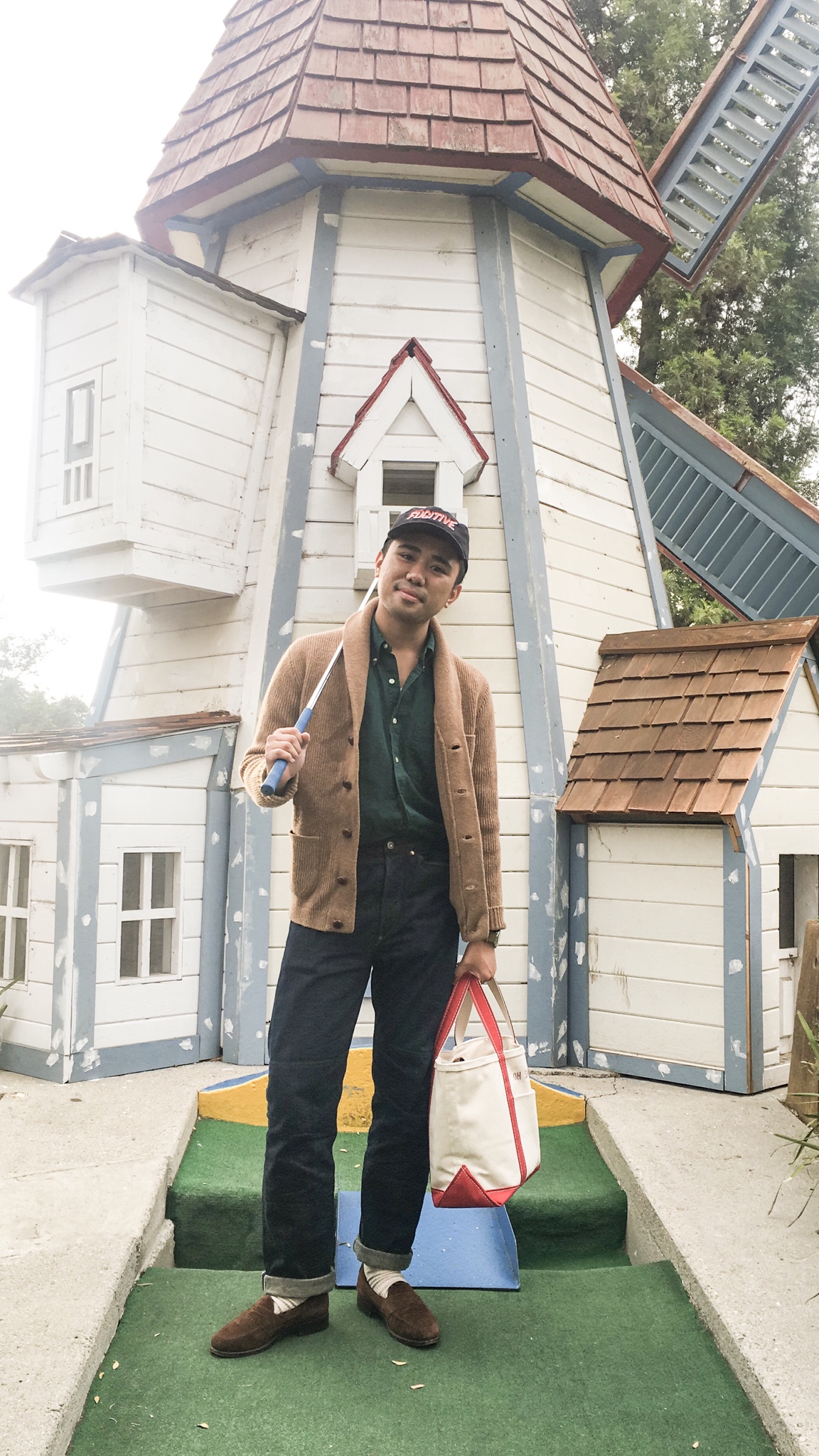 Wanting a “going out bag” that was more fun and utilitarian, I actually got a custom canvas tote bag from L.L Bean.  I did it in the classic red/white with a zip top and side pocket to hold everything I normally bring with me.  Upon receiving it two weeks later, I was in love!  I immediately put it to use, feeling more comfortable bringing my shit with me rather than debating whether it was worth it to bring my messenger bag. I could’ve bought a vintage one on eBay or Etsy, but I liked the opportunity to make this one my own, future stains, tears, and all. 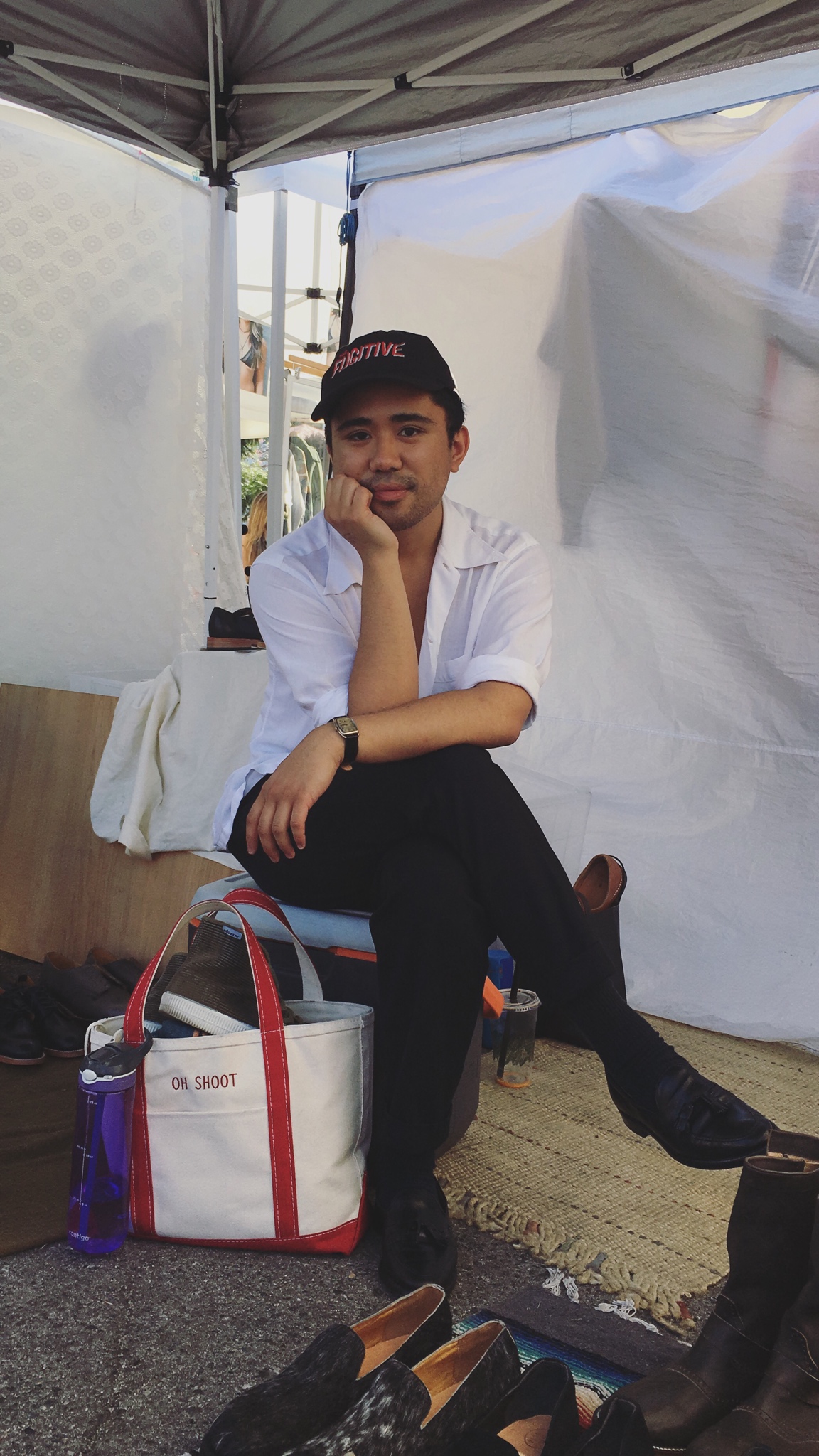 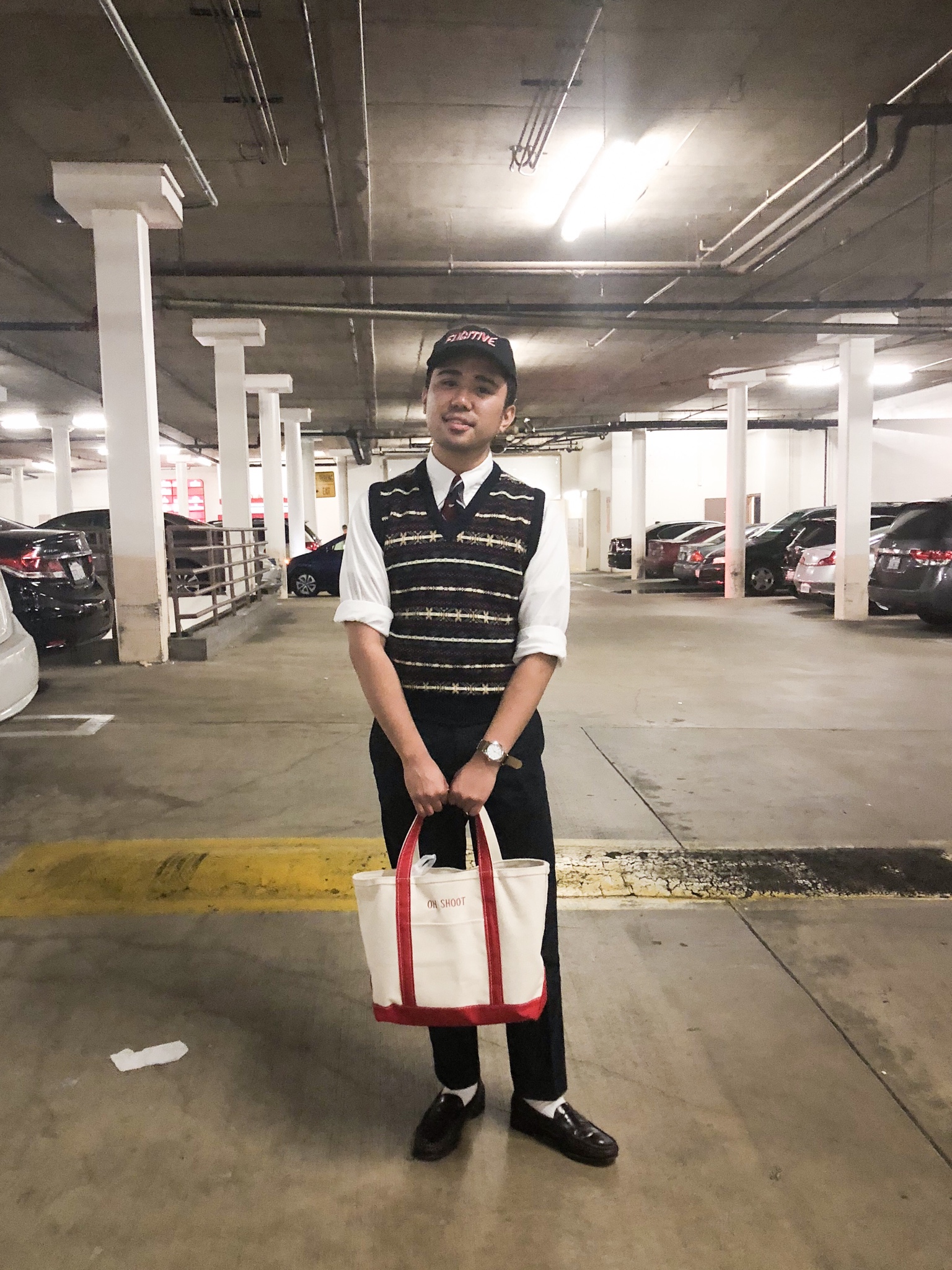 The Clarke and Barba Leather Tote

After a week or so of bringing my canvas tote everywhere I was contacted by Silvano and Melissa, the husband and wife team behind Clarke and Barba.  As LA artisans, they are dedicated to making minimal leather products that are functional and stylish.  They were also readers of the blog/fans of classic menswear and was interested in potentially making an “Ethan” tote bag.   I was intrigued since this was going to be the first product that I would review and have a say in designing! 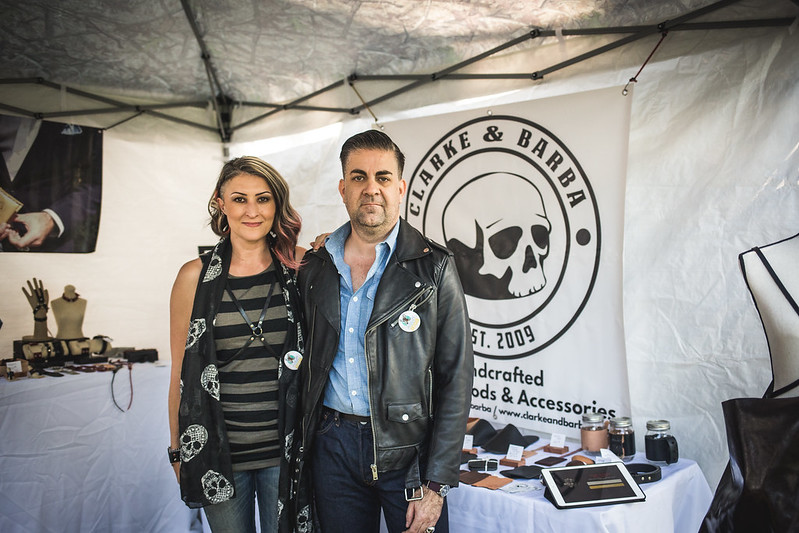 Melissa and Silvano of Clarke & Barba.

Now leather totes are different than canvas ones. Sure, L.L Bean has done both, but leather feels something more heritage and workwear-y.  Think less Drake’s, more Bryceland’s.  This was something that would wrinkle and age more gracefully than canvas (in my opinion) and is a better match for suited tailoring rather than separates.  Though on second thought, it would mesh well with denim workwear looks too.

Suddenly I was wondering what this bag would look like! Would it be tall with a small handle like Bryceland’s? Would it simply be the L.L Bean but in leather? How do we make sure that it’s still a collaboration and that the C & B brand also shines through?  Spencer and I were pretty nervous about it, but after meeting with Silvano and Melissa (the company takes after their last names) we were put at ease. This husband and wife team have a great vision and product that would make this collaboration easy. 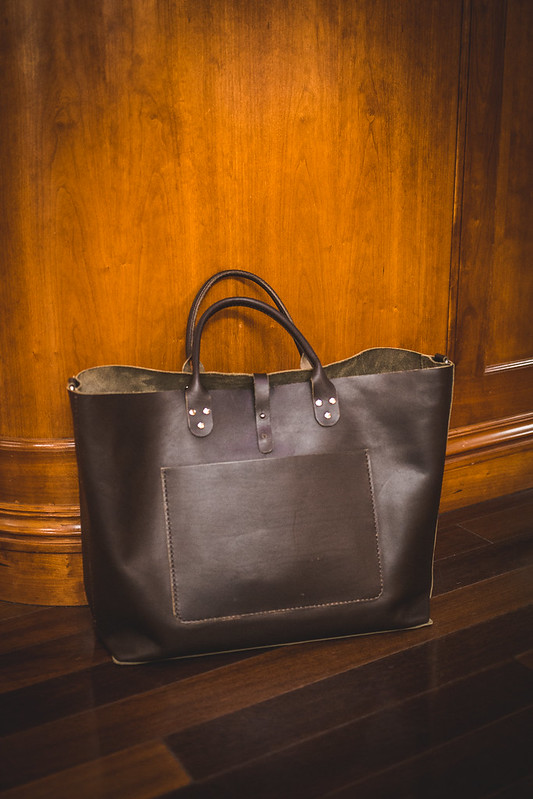 In the end, we went with a simple but utilitarian design that I was proud to have. Firstly, the bag features two types of closure: normal handles and a removable shoulder strap.  We did this so you could have the option of how you want to carry it, which could depend on what you’re transporting at the time.  Instead of a zip top, we went with a simple clasp so that the bag doesn’t flop open when you’re walking around. 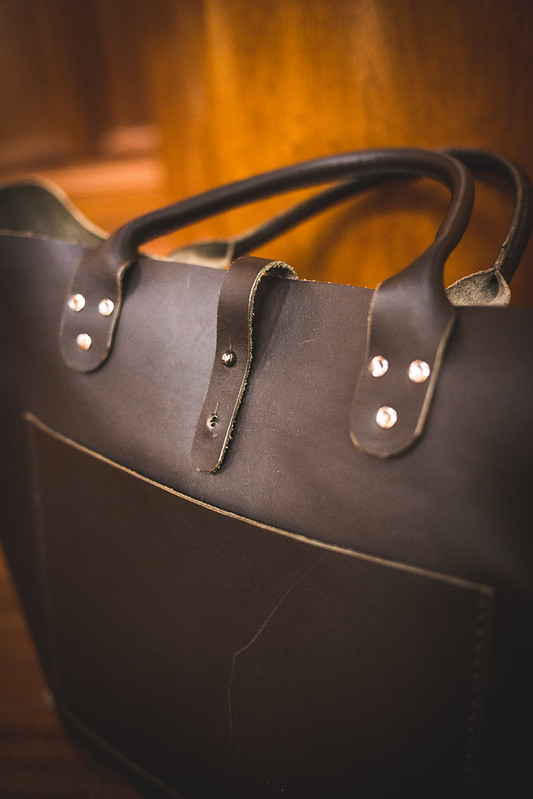 I requested that these have pockets both inside and out, because I’m always bringing extra shit with me everywhere I go.  The outside pocket is simply a patch, sewn on the exterior of the bag while the inside one is more like a pouch that has a clasp closure. I’d put pens on the outside one and my keys/wallet/contacts on the inside one. 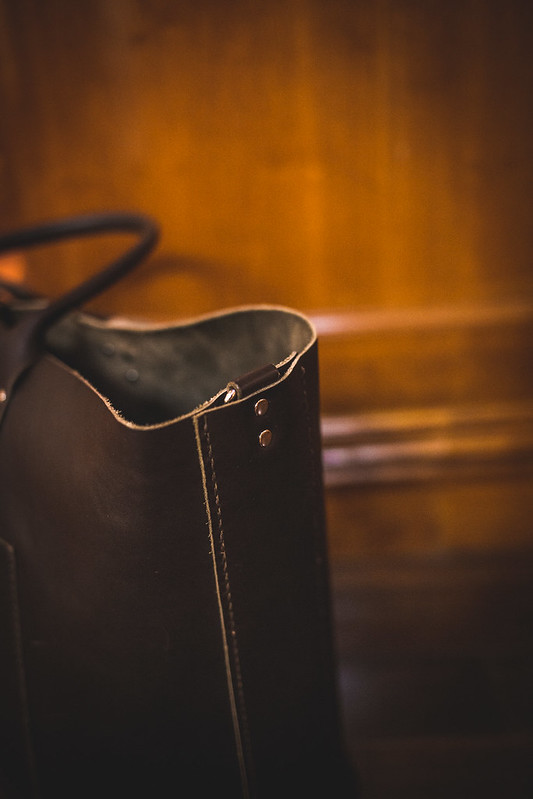 The ring (folded down) that is used to attach the removable shoulder strap.

Now we made two models: the Spencer and the Ethan.  The main difference is the width, which in turn affects the silhouette.  The Spencer is larger bag and is more suited as a weekender bag, being Length – 23″ x Width – 5.5″ x Height – 13.5″.  As a result, this larger bag is more rectangular with a slight widening at the top.  Spencer already brings it around with him, even if its just for a water bottle and his latest history book.

While we originally started with the Spencer size, I actually requested that mine (the Ethan) be made smaller. Clearly thinking of my L.L Bean tote, what I really wanted was a slightly bigger, more elegant variation.  Silvano heard me loud and clear and adjusted the dimensions of the “Ethan” model: Length – 18″ x Width – 5.5″ x Height – 13.5″.  Because of the shorter length, the widening to the top is more apparent, giving it an almost Frank Clegg silhouette.  I think this one is perfect for me, able to hold my laptop, camera, and all the chargers without giving them too much room that they’re jostled. 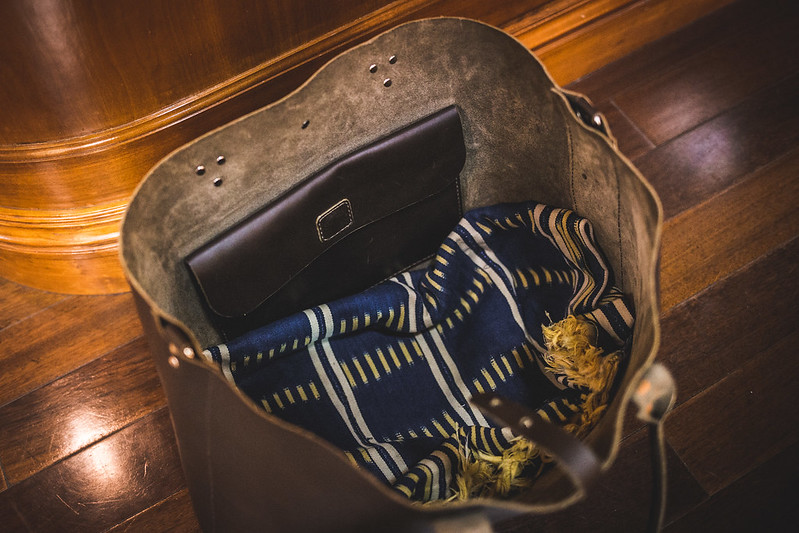 It’s just a personal touch, but I put an indigo blanket as a bottom layer as to provide cushion for my electronics or if I have some impromptu picnic date.

You Can Actually Buy These Bags! 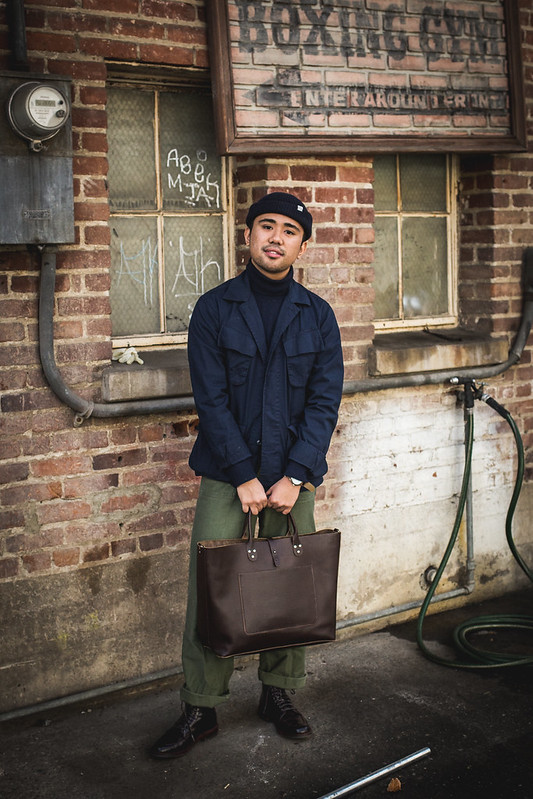 The Ethan and Spencer bags are now available as MTO on the Clarke & Barba website, selling for $250 and $280 respectively.  Making them affordable was a big deal for us, since we still like to be thrifters at heart!

If you follow me on social media or you’re a friend of mine IRL, you’ll know that Spencer and I have been using these bags ever since we got them.  It’s been great to not have just a messenger bag at all times.  And now based on how much we like them, we’re making them available to you!  You can get them in the same dark brown leather or black (for the Ethan model), but different color options can be inquired by contacting Clarke & Barba directly. 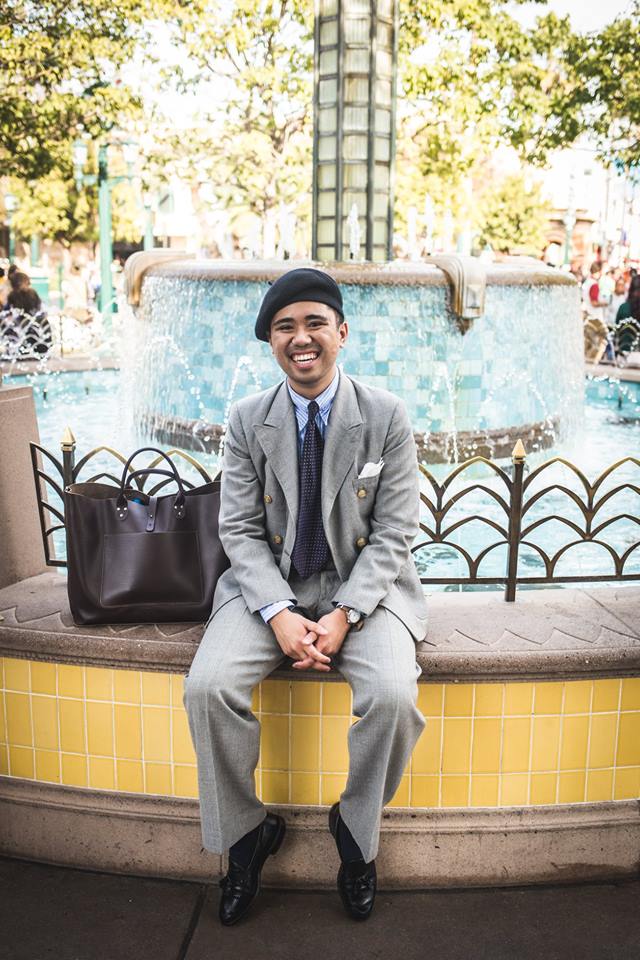 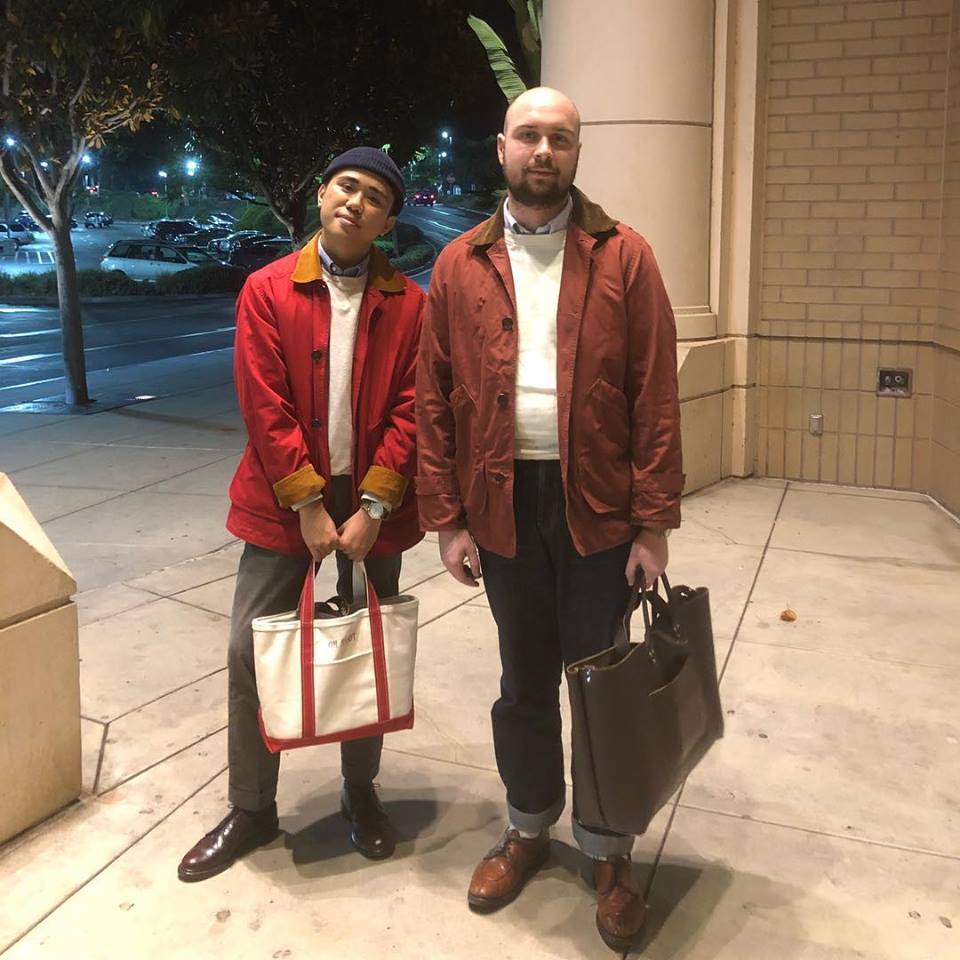 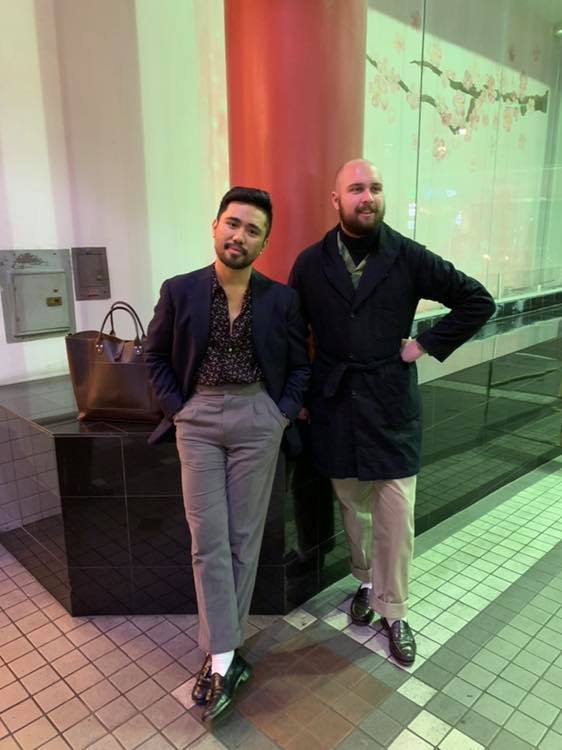 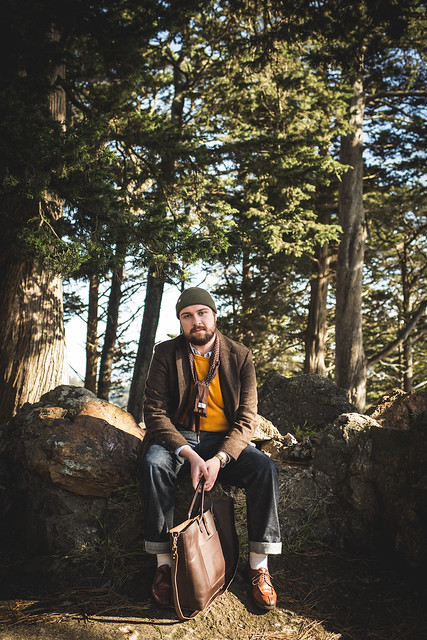 Since this is a true partnership, we want to disclose that Spencer and I do get a small percentage of the profits.  With that said, I want the focus to be on Clarke & Barba.  We need to support a good business that is making something original and great here in Los Angeles!  Their products are cut and handmade by the couple themselves, making it a true MTO business.  Each of the finished bags is also slightly different due to this quality and because the leather retains its original skin and can contain markings.   You definitely can see the great, final result in our own totes: they are perfectly minimal and utilitarian.

I just want to say that it’s crazy that Spencer and I even have a chance to do this.  When I first started, this was just a hobby I would do during my senior year and MBA classes, writing about vintage pieces and literally fanboying over guys at the Armoury. I’d like to think that things have gotten a bit more mature and editorial, culminating in a local magazine feature and the fact that I was able to actually partner with a local artisan, design a bag,  and offer it to my readers.

It’s been an unreal journey and I can’t wait to keep at it.