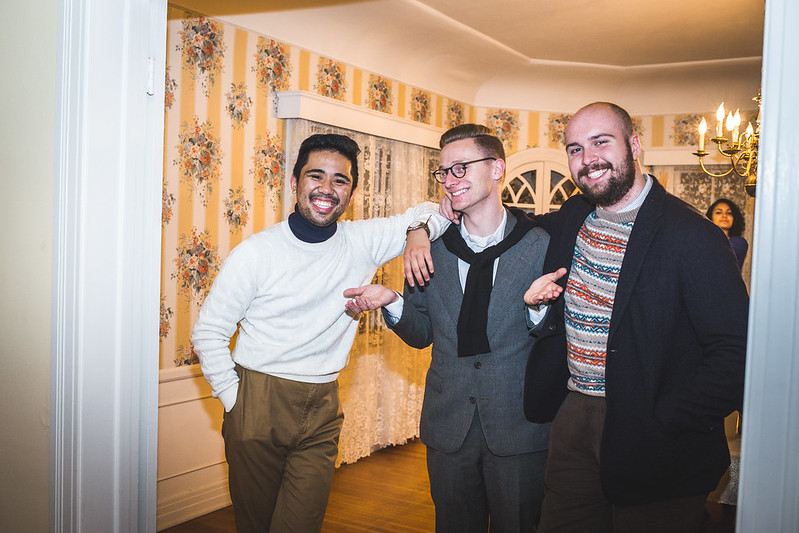 Time to eat turkey and get silly with your friends.

Ah Friendsgiving. That special event where you can kick your parents out of the house, invite your friends over, and totally not have a rager.  In all seriousness, that’s exactly what Spencer and his friends do the Saturday after Thanksgiving!  It’s really just a wholesome gathering.

Now like I said in the previous entry, I wasn’t a part of the original Friendsgiving crew.  At first I was simply “Spencer’s friend that was into suits”.  Now I’ve gone just about every year, helping the guys set up/tear down and take some pictures.  As you’ll soon see from the snapshots, the group has gotten bigger! Jay has his friends from college and I was able to bring along my girlfriend (and her delicious vegan mac and cheese).  Conversations abound, ranging from discussing the Solo Bolo to an anecdote about how someone’s coworker called Taro boba “God’s cum” after tasting it for the first time.  It was really a fun night.

The dress code as always is “semi-formal” or smart casual, which usually just means “dress how you want, just not in a tee shirt”.  While we don’t discriminate the style (this is just a low-key get together after all), Spencer, Jay, and I use the opportunity to dress up a bit and maybe try out some cool fall outfits that we haven’t done yet or want to experiment with. 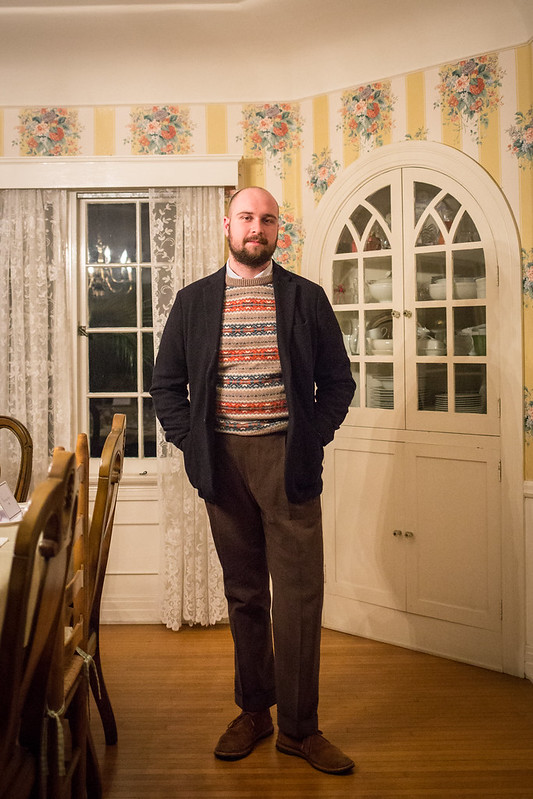 Spencer is just straight up Drake’s F/W Lookbook 2018. It literally has all the needed pieces: unstructured navy jacket, fair isle sweater, brown trousers, and chukka boots.  None of it is actually Drake’s, but it just goes to show you that you can always use what you own to approximate a look.  It’s perfectly fall-ready and I think you could wear this out with friends (as Spencer did) without looking too dressed up.  This probably because everything is softly tailored and goes well with a slouchy, #pocketfisting pose.  Neo-ivy is the best!

The trousers are Stoffa, which Spencer ordered a couple months ago after seeing how well mine turned out. The fair isle sweater, while not a sweater vest as I enjoy, is pretty good, utilizing a brown base with blues and oranges for good measure; he used his own J. Crew discount for that one (and was one of the things I actually liked).  The real star of the outfit is the unstructured Uniqlo jacket. It’s faux herringbone tweed, which is comprised of a wool-poly blend. It’s not natural and kinda fashion-y with a short length, but it’s a perfect beater jacket with no padding/structure and patch pockets.  I might get one for my own lazy days! 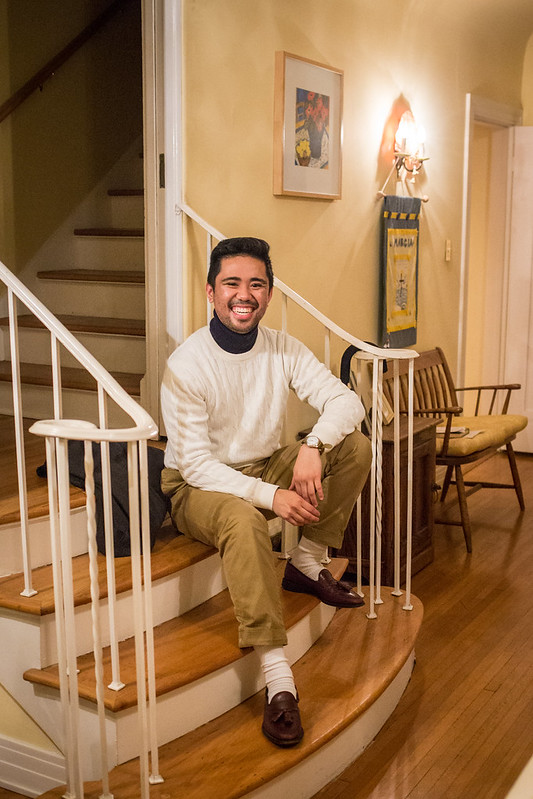 My outfit is inspired by some 70’s/80’s prep.  I’ve been fascinated with turtlenecks lately (reflecting an earlier blog post), but more so with the rugged, layering aspects rather than the minimal approach.  I know there are some ivy guys who wear turtlenecks under a oxford shirt, but I always felt that was off to me; my shirts are also cut very full, so I didn’t think the look was flattering.

Instead, I took a cue from an old Matt Woodruff pic and wore a turtleneck under a sweater.  Instead of Matt’s minimal take (I say that because it’s plain), I wanted to evoke the ivy vibes of a cable knit, which happen to be a favorite of the Drake’s crew; I think that the twisting weave provides some visual texture to make it interesting.  Even though it’s slightly unorthodox, I was plenty warm in the outfit.

Now enjoy some pictures from the night!  It makes me think that Spencer and I should make one for our menswear guys (or at least just make a reservation somewhere).  Do you think we could all pack into an Islands? 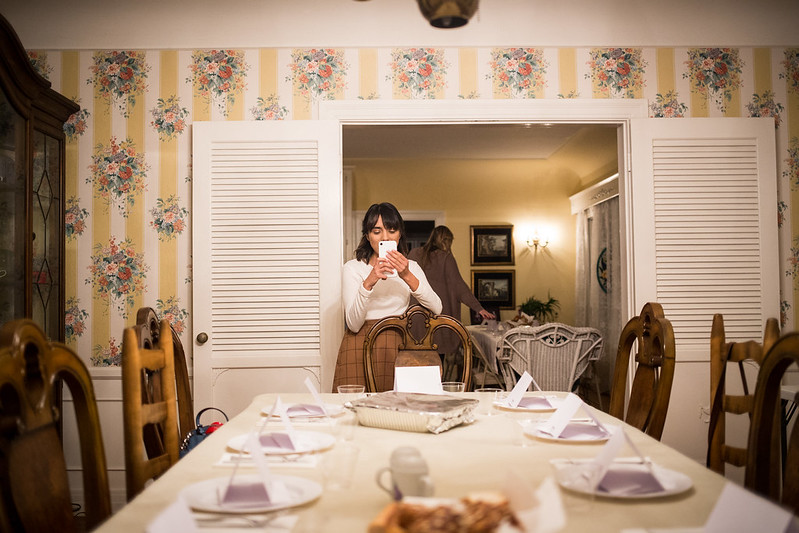 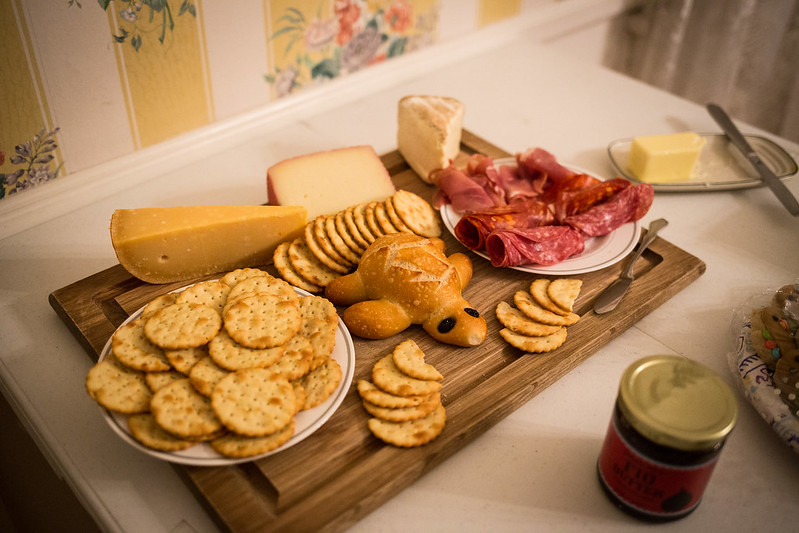 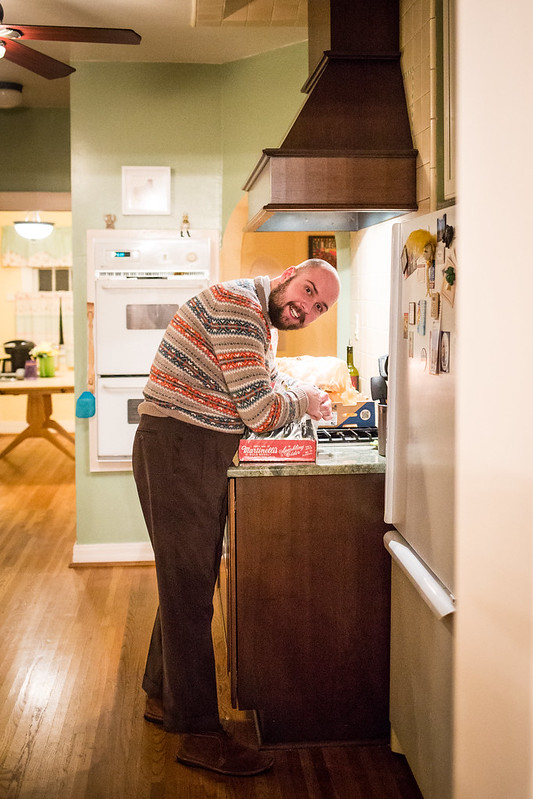 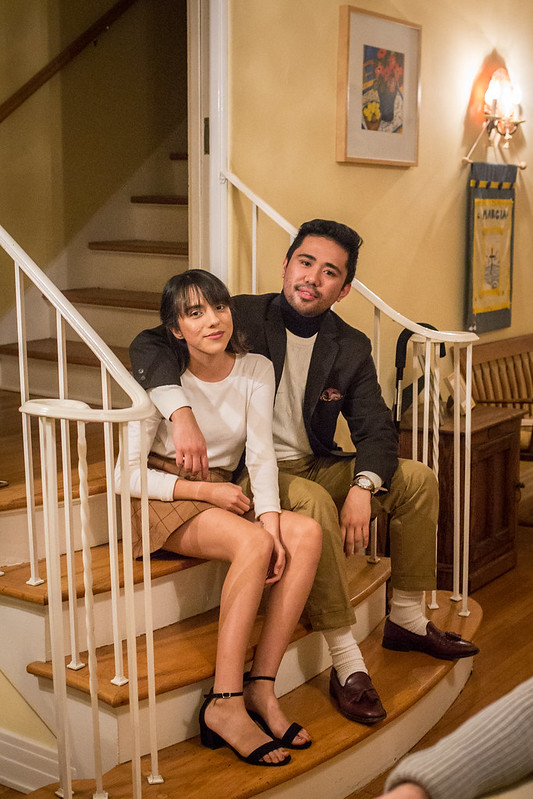 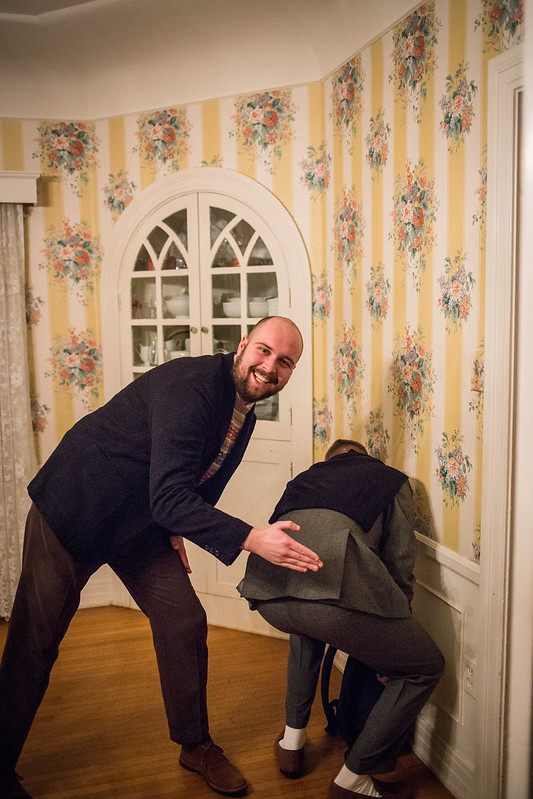 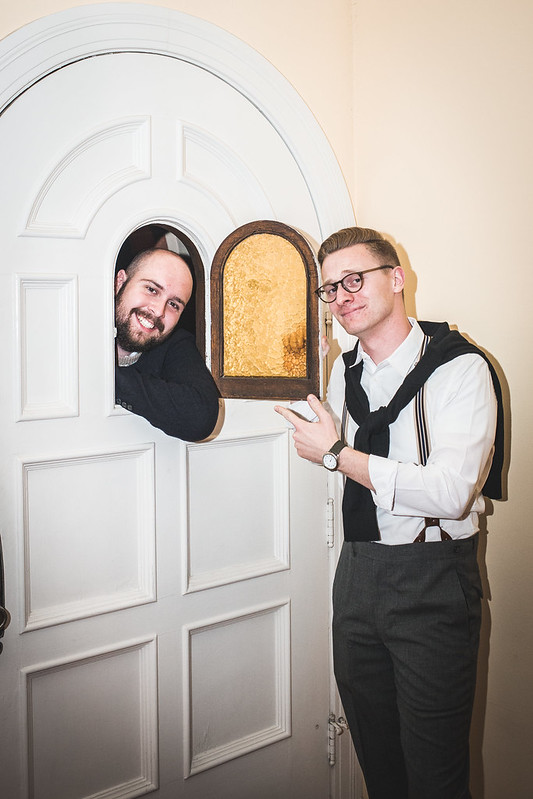 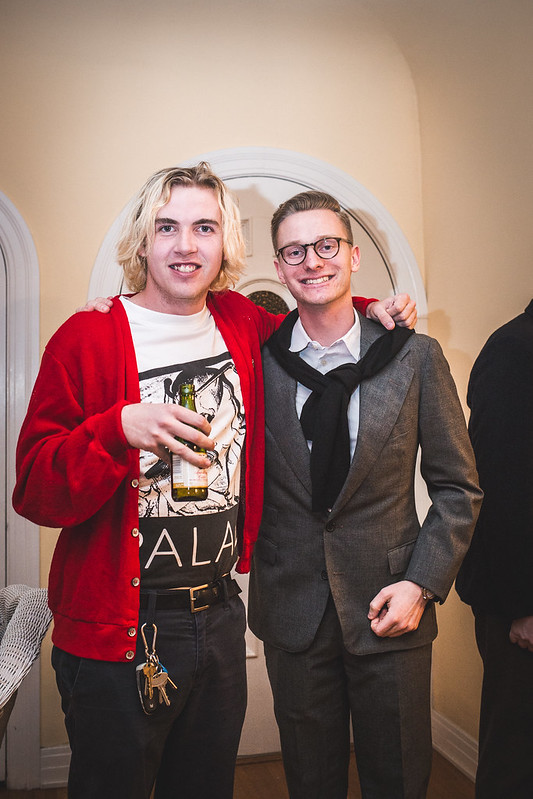 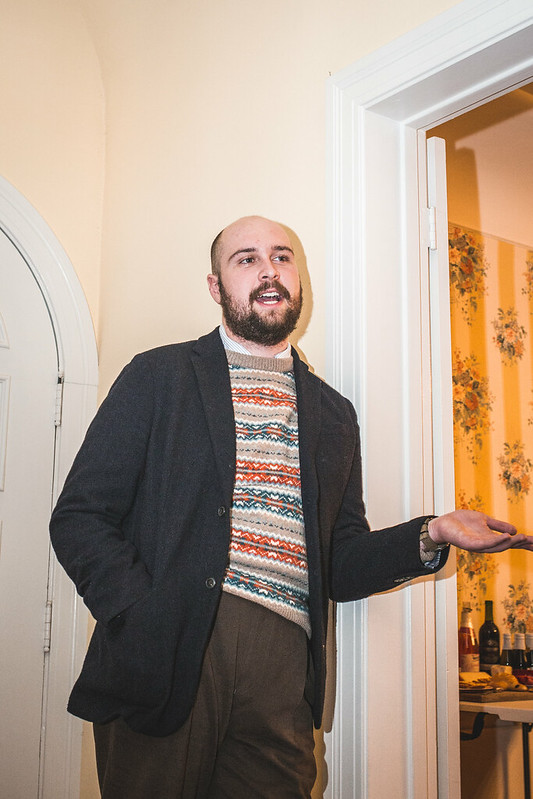 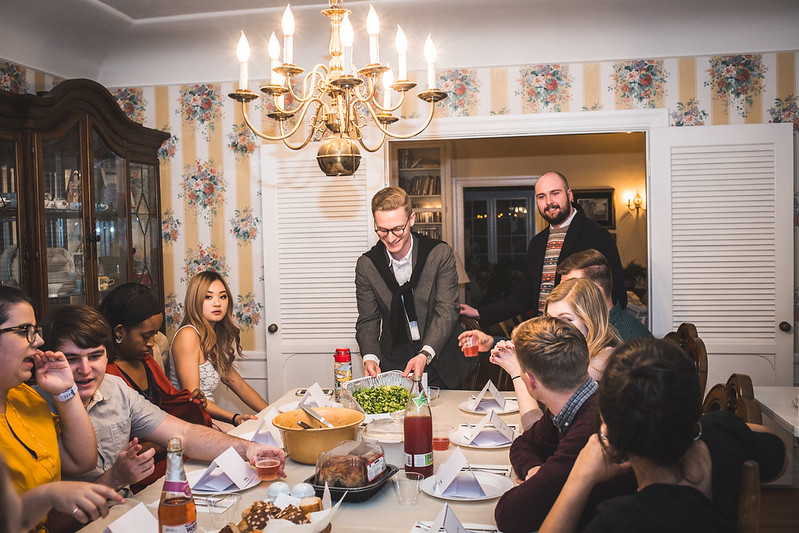 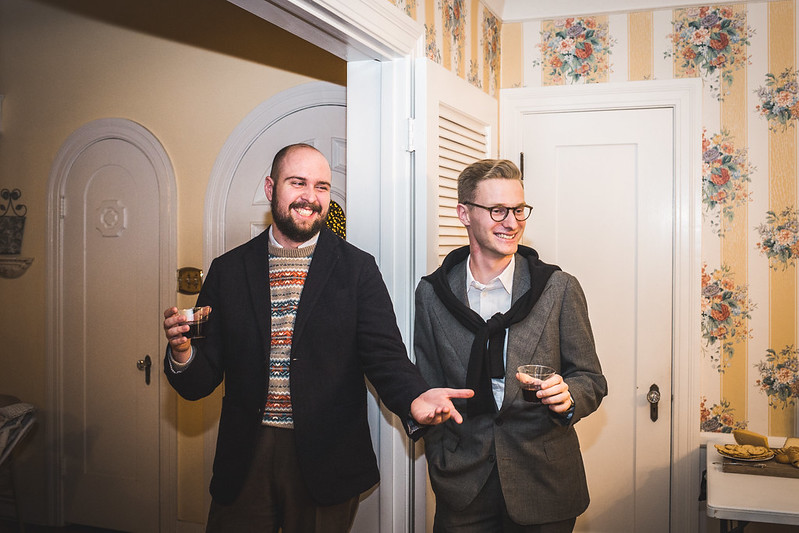 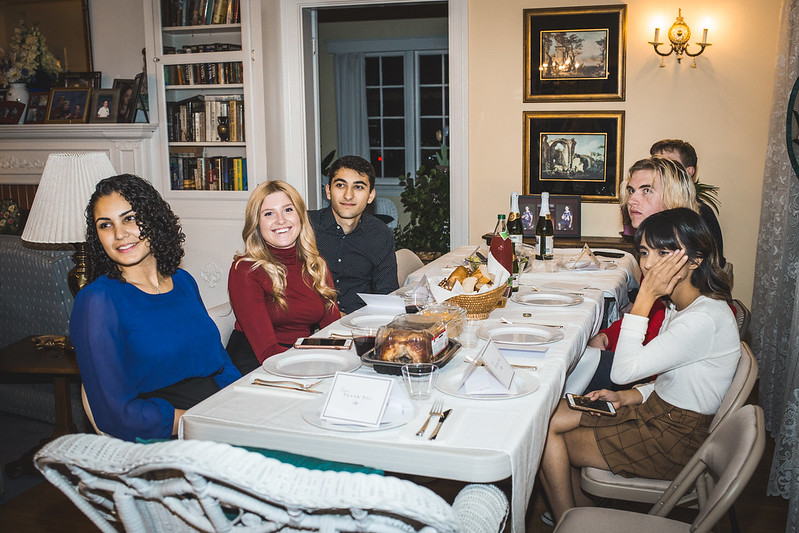 The cool table (because I sat there)! 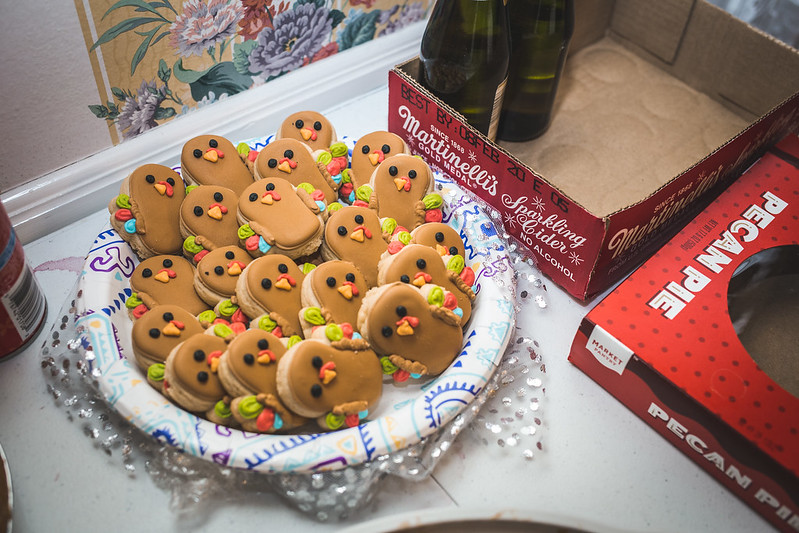 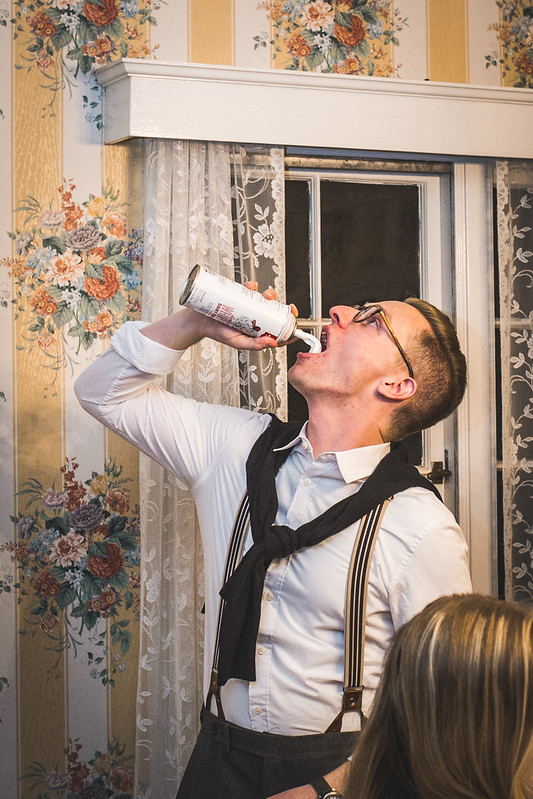 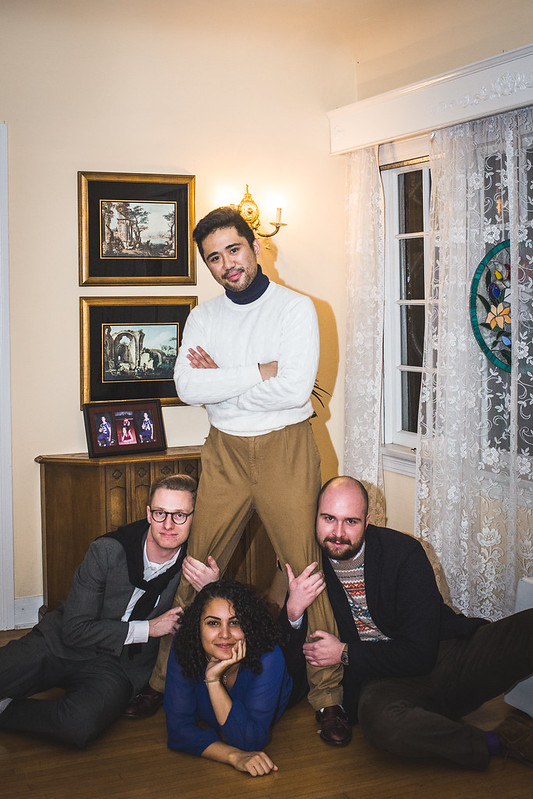 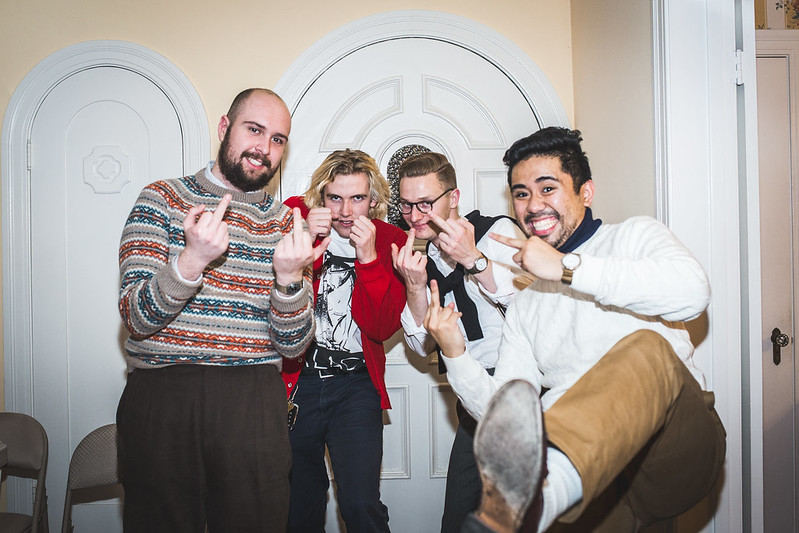 Our group chat was called the Milkshake boys because we got milkshakes once. 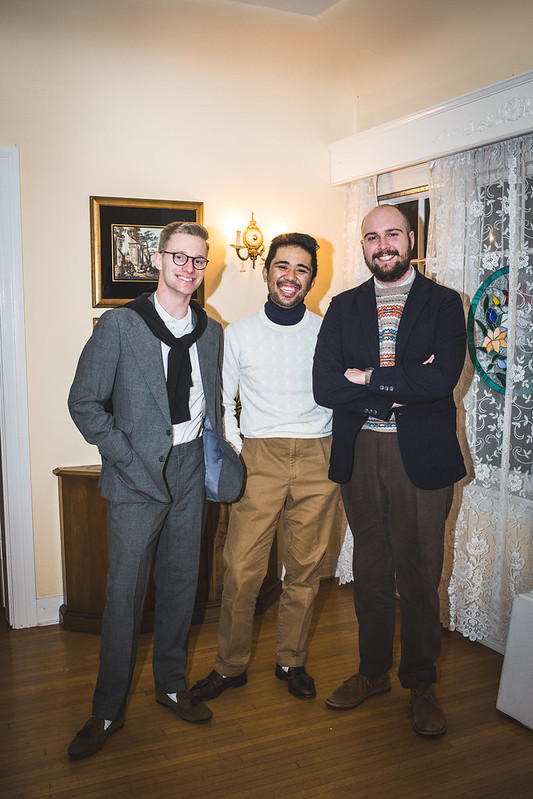 Thankful to have been such close friends with both of these guys.

I just want to close and say that I’m extremely thankful not only to be able to celebrate with these guys and their friends (mainly because my “main” friends have their own family Thanksgiving plans) but to virtually celebrate it with all of you! I say this a lot, but I’m always surprised to see how this community has grown and to have made close friends all over the world thanks to our interest in clothing.  It’s even lead to some amazing opportunities like a tote bag or a friend literally gifting me a tie.   Whenever I get to this point of the year, it’s so easy to reflect back on what has changed in 365 days; I’m happy to say that things have only gotten better.

I hope you all had a great thanksgiving with your friends and family!

Photography by me sucka