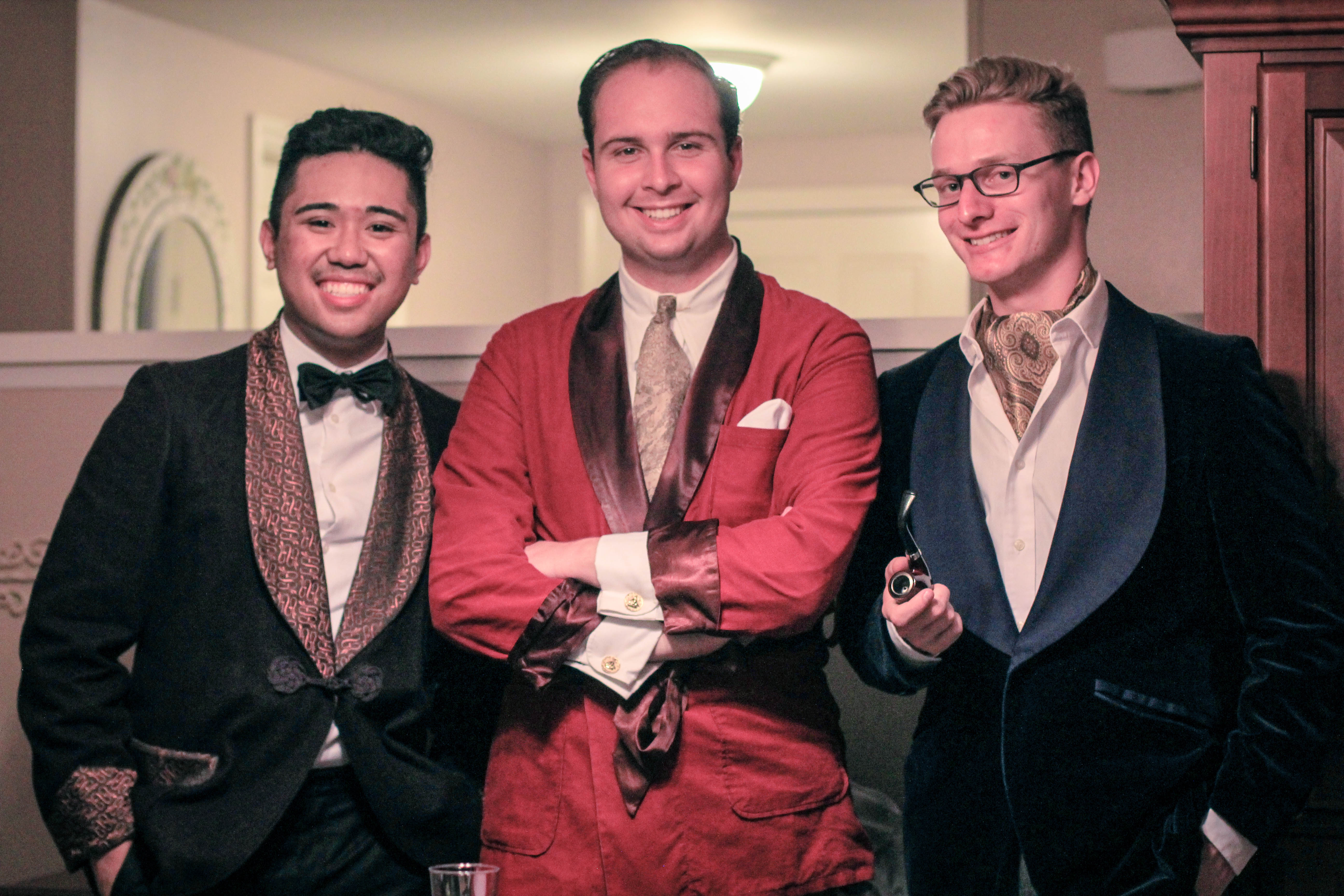 Recently I was invited to a dinner party hosted by my good friend Spencer.  Unlike most parties, this one came with a dress code:  wear a smoking jacket. So Jay, Spencer, and I crafted some unique and classy outfits to show to you guys today! All featuring the seldom worn smoking jacket.

What is a Smoking Jacket?

Just like the name implies, a smoking jacket was a jacket worn after dinner to smoke in.  According to Wikipedia, these garments to designed to “absorb the smoke…and protect [the wearer’s] clothes from ash.  Even though this was meant to be worn at home (after dinner), the dinner jacket was still made to look elegant.  A traditional dinner jacket is cut similarly to a tuxedo jacket (but is looser in terms of fit), made from silk or velvet, with a shawl collar, and can be fastened by button or a tied belt. Everyone has seen Hugh Hefner’s signature red smoking jacket, but there are varieties to be found, with different fabrics and details.  Other than buying from certain luxury designers (Ralph Lauren), you can get your own by checking eBay or vintage stores!

When to Wear It

As with many aspects of fashion, there are certain rules to smoking jackets.  Like I said before, these were typically worn at home so business wear would be traditionally worn underneath.  This would call for suit pants, a shirt, and a tie or bowtie (not black).  Even though tradition has its place in menswear, there is also room for rule-breaking.  I personally see the smoking jacket as a piece to be worn in place of a tuxedo (dinner) jacket.  In a world where most guys wear black, white, or navy blue tuxedos, a smoking jacket with some crazy details is definitely a conversation piece at a party.  Most guys will say “nay” against wearing your smoking jacket with tuxedo trousers, but putting your own ideas (within reason) into menswear is the whole point of personal style.  And Jay, Spencer, and I definitely put our own spin on the awesome smoking jacket.

“The Traditionalist” on Spencer 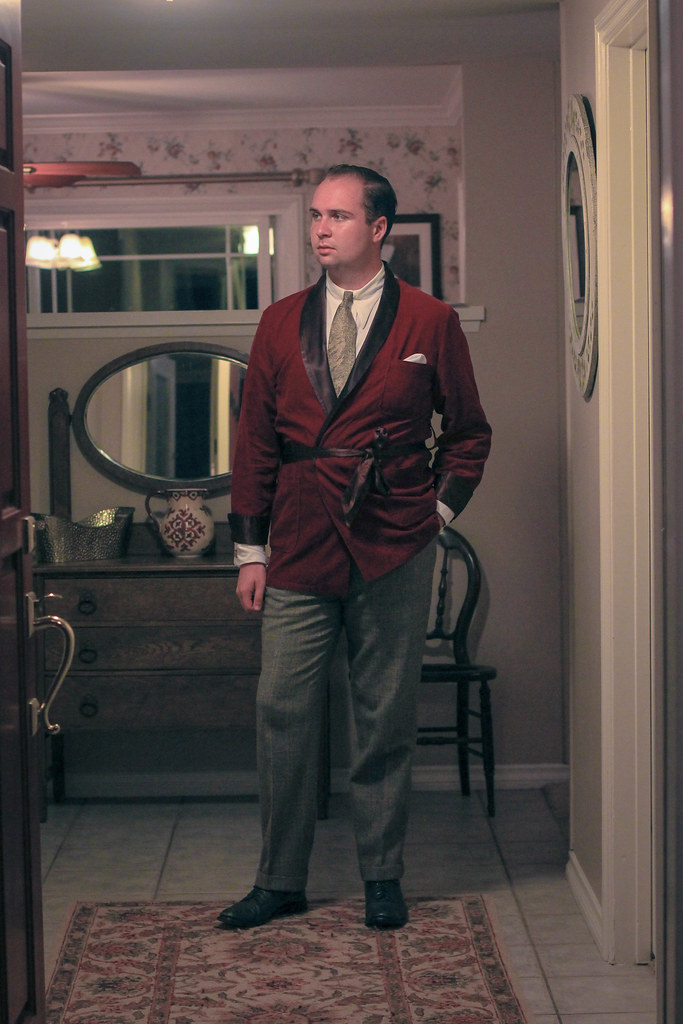 Spencer is wearing what the dinner jacket was meant for: something to pop on while taking a smoke at home.  However, even though he’s in a tie and trouser combo, his outfit gets much more interesting the closer you get. First, let’s look at his smoking jacket.  Spencer’s jacket is made of corduroy (with silk lapels and cuffs), but the wales (ribs) are closer together, making this fabric and the piece much more formal.  He’s also got the belt to tie his jacket, which makes it fit much more slim.  The color is a basic red which gives an old school feel to the outfit.  Most people think that smoking jackets are red, but you can definitely find them in other fabrics!  Interestingly, his jacket has patch pockets which are often thought of as the “casual” pocket. 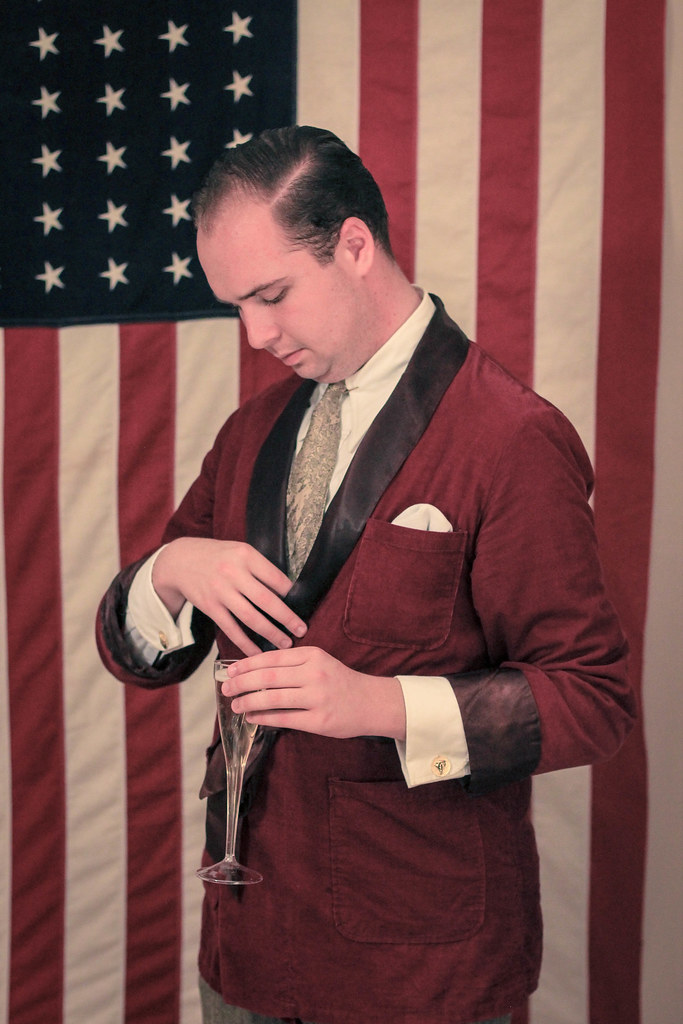 Now, let’s check out his other details.  Spencer’s tie is a yellowish-gold with some oriental florals going on!  It’s very regal and definitely a cool design; you don’t get ties like this anymore.  Ties with unique designs are a great reason to start going vintage. 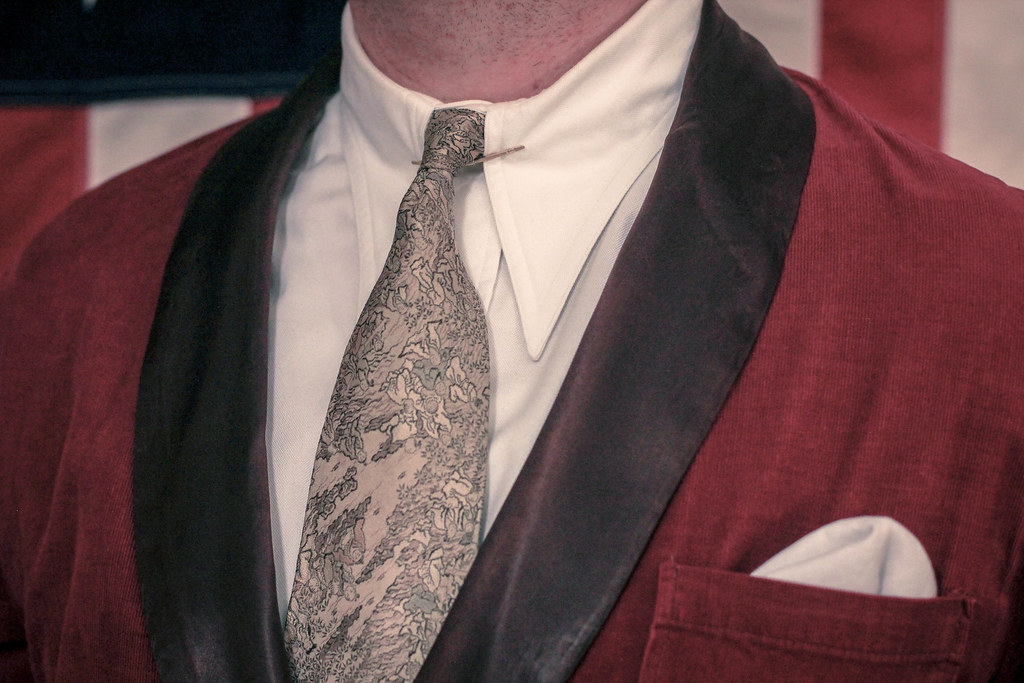 Spencer keeps his air of formality by wearing a french cuff shirt.  We’ve seen him frequent these before and this time, he uses some awesome gold cufflinks with a sailboat design.  Classically prep. 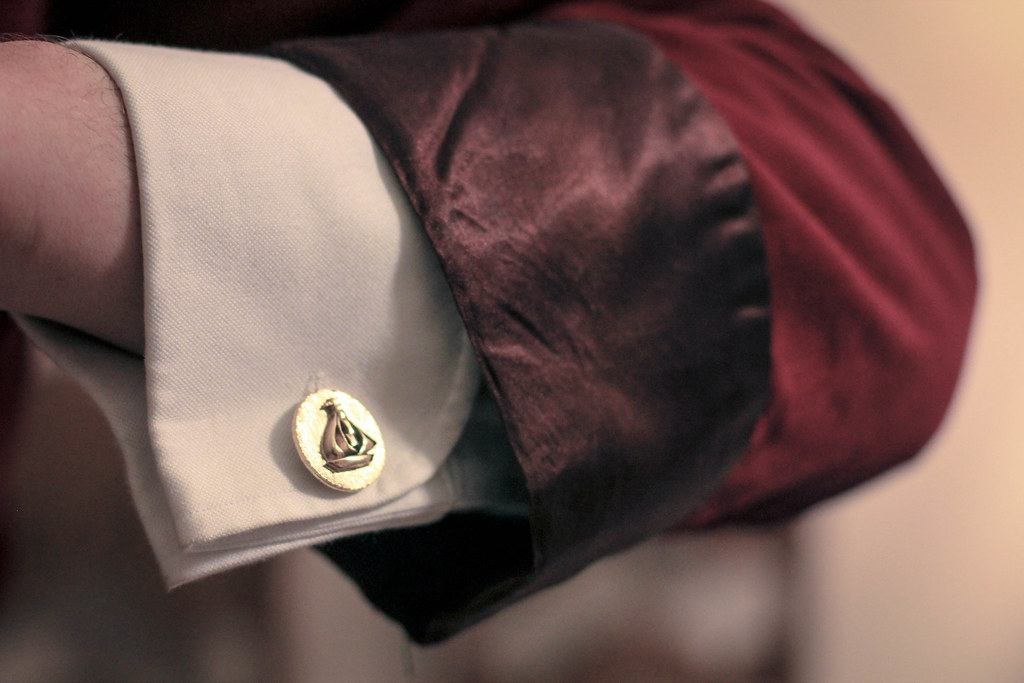 He finishes off his outfit with some awesome windowpane trousers (again, going with that “relax after work” aesthetic) with striped socks and dark green shoes. 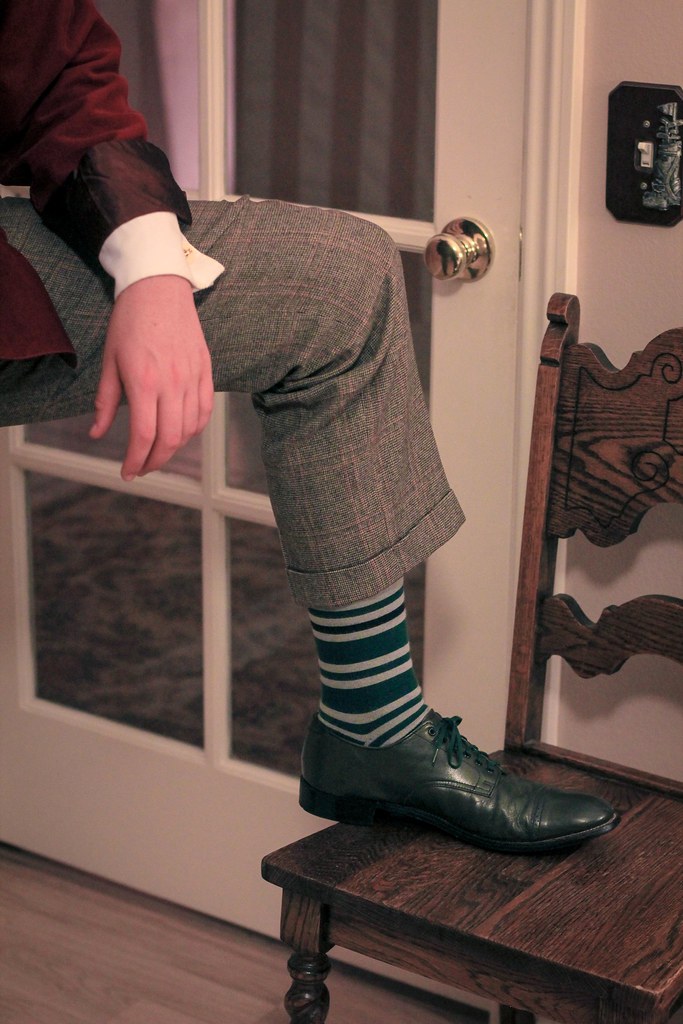 Spearpoint Collar Shirt from Luxire, All other items vintage

“The Lounger” on Jay 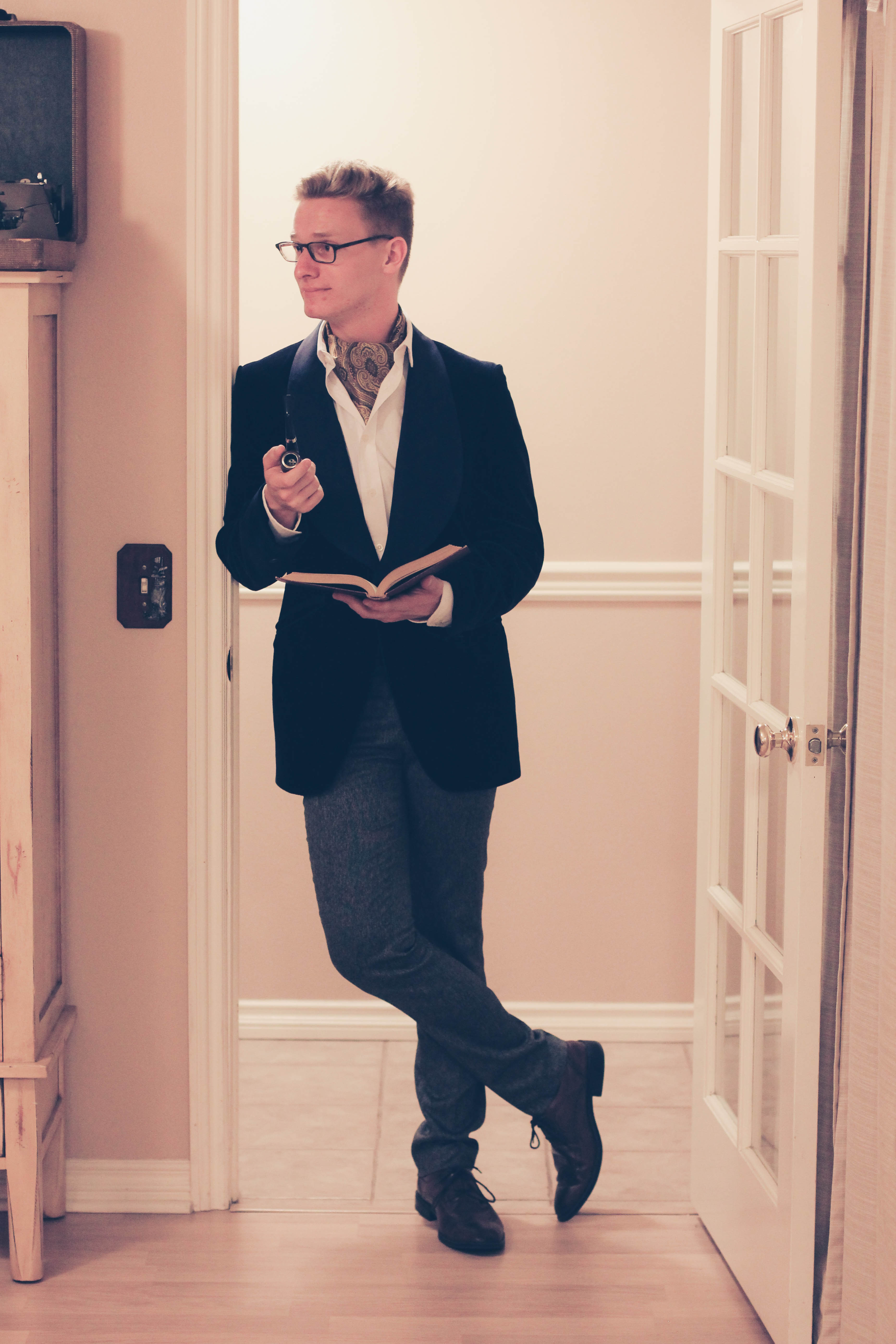 Jay is wearing the smoking jacket outfit that you’d usually see in the late 60s or 70s.  Even though he is still in business wear, Jay definitely has the “funner” outfit.   By keeping the rest of his outfit simple, Jay draws attention to the best features: his ascot and his smoking jacket. 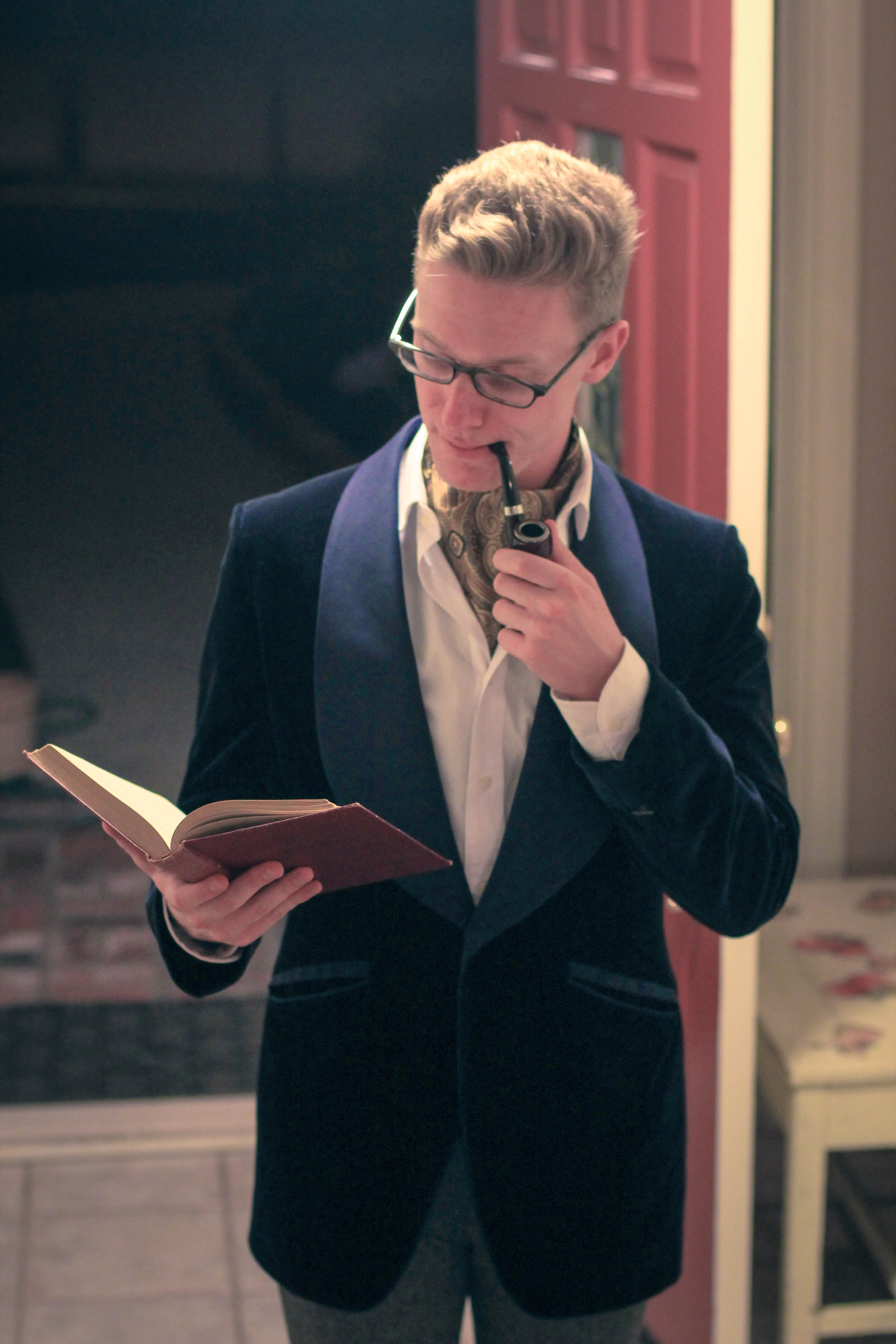 An ascot was the precursor to the necktie and was much wider that a traditional necktie.  They are usually made of silk and can be plain (think the red plain one on Clayton in Tarzan) but paisley can be commonly seen as well.  You don’t see them much anymore outside of dandies and “morning dress”, but Jay brings it back full force.  His paisley ascot is silk and bright, which contrasts well with the rest of his outfit. 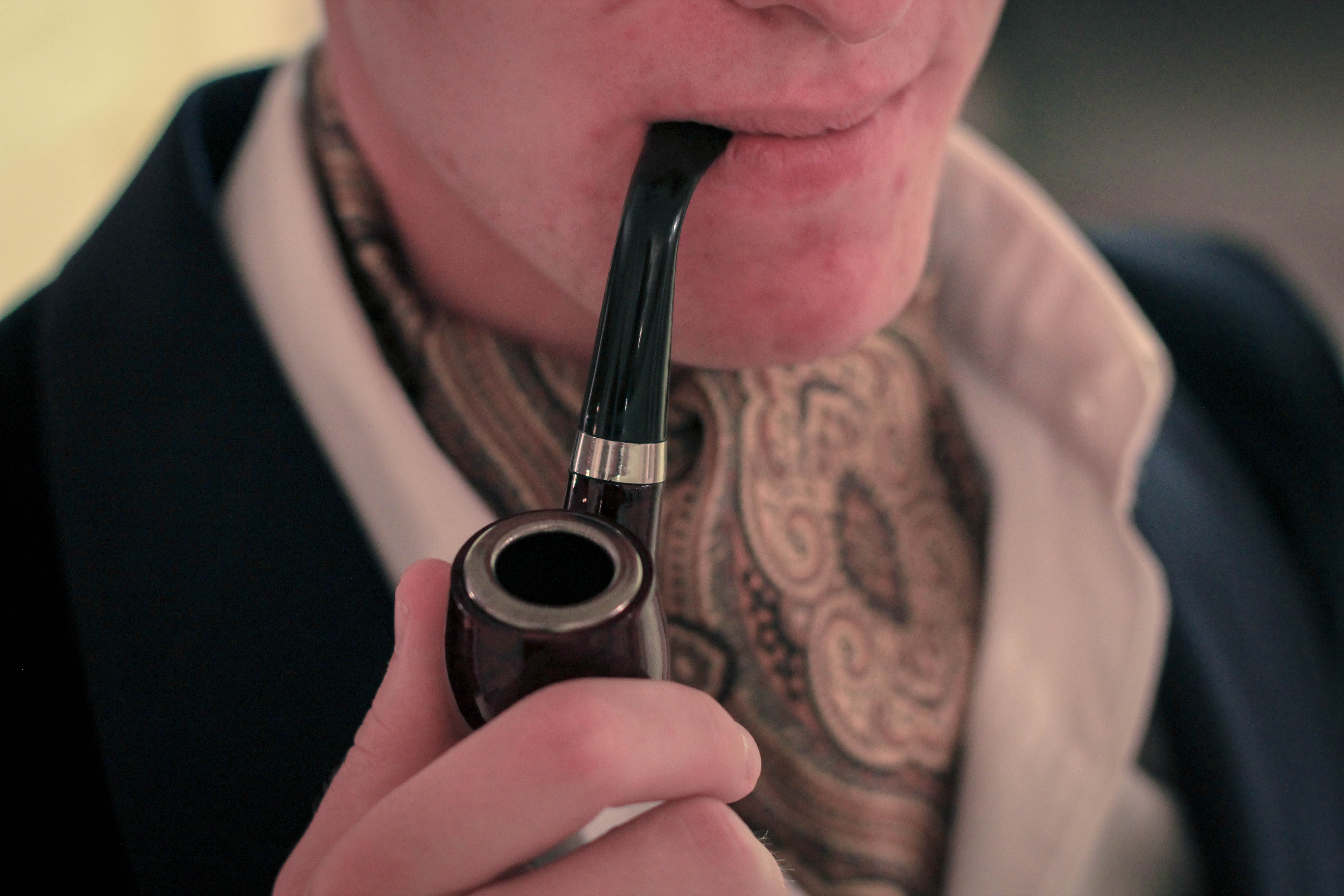 Personally, I like Jay’s smoking jacket the best.  It’s made out of velvet, structured like a blazer, has a wide shawl collar, and nice slanted pockets to create an angular look.  The large lapels and velvet fabric are all dead giveaways to the era of the jacket:  the 1970s.  Even though it’s vintage, it’s cut in such away that Jay can wear it with his modern clothes. 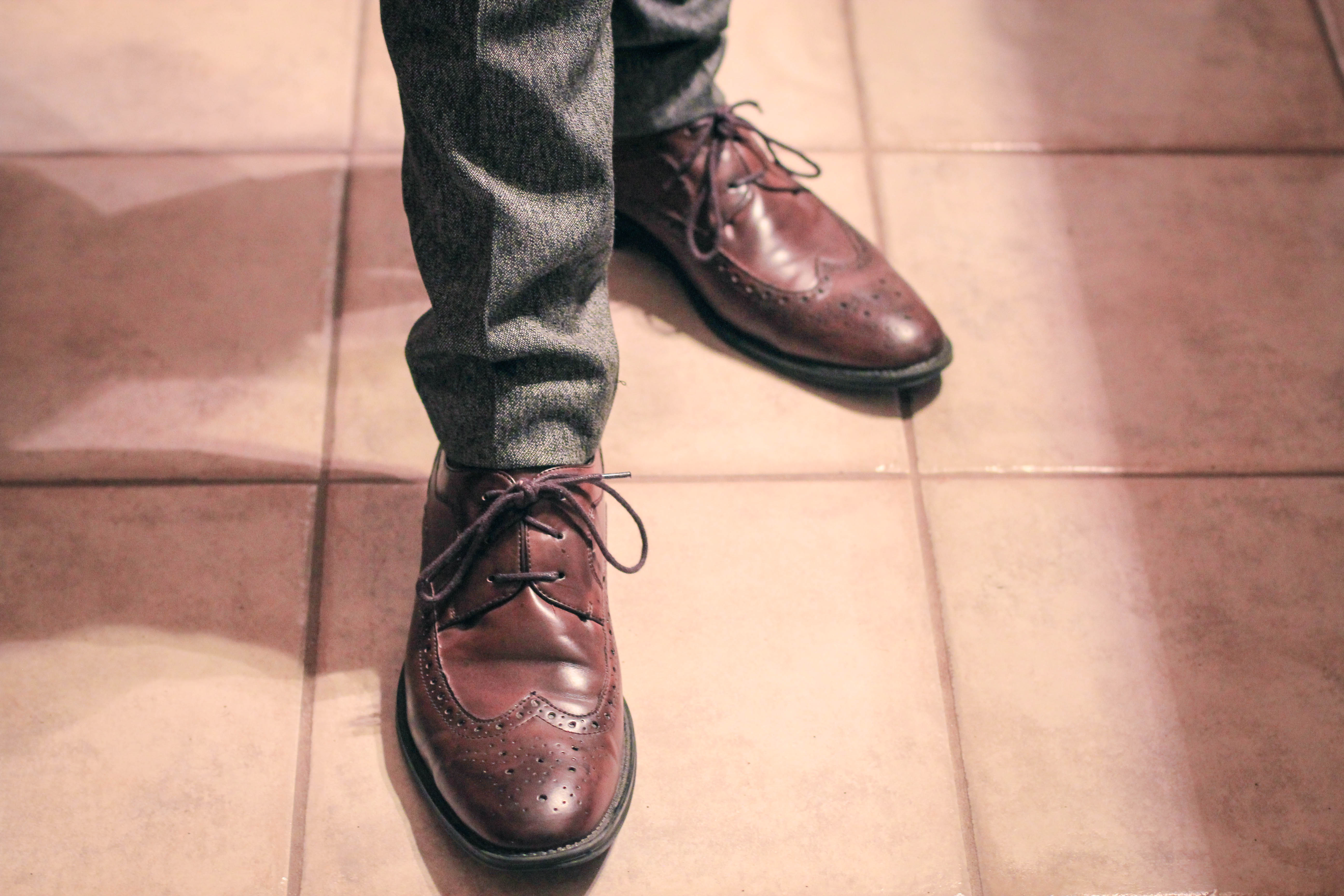 “The Dandy” on Ethan 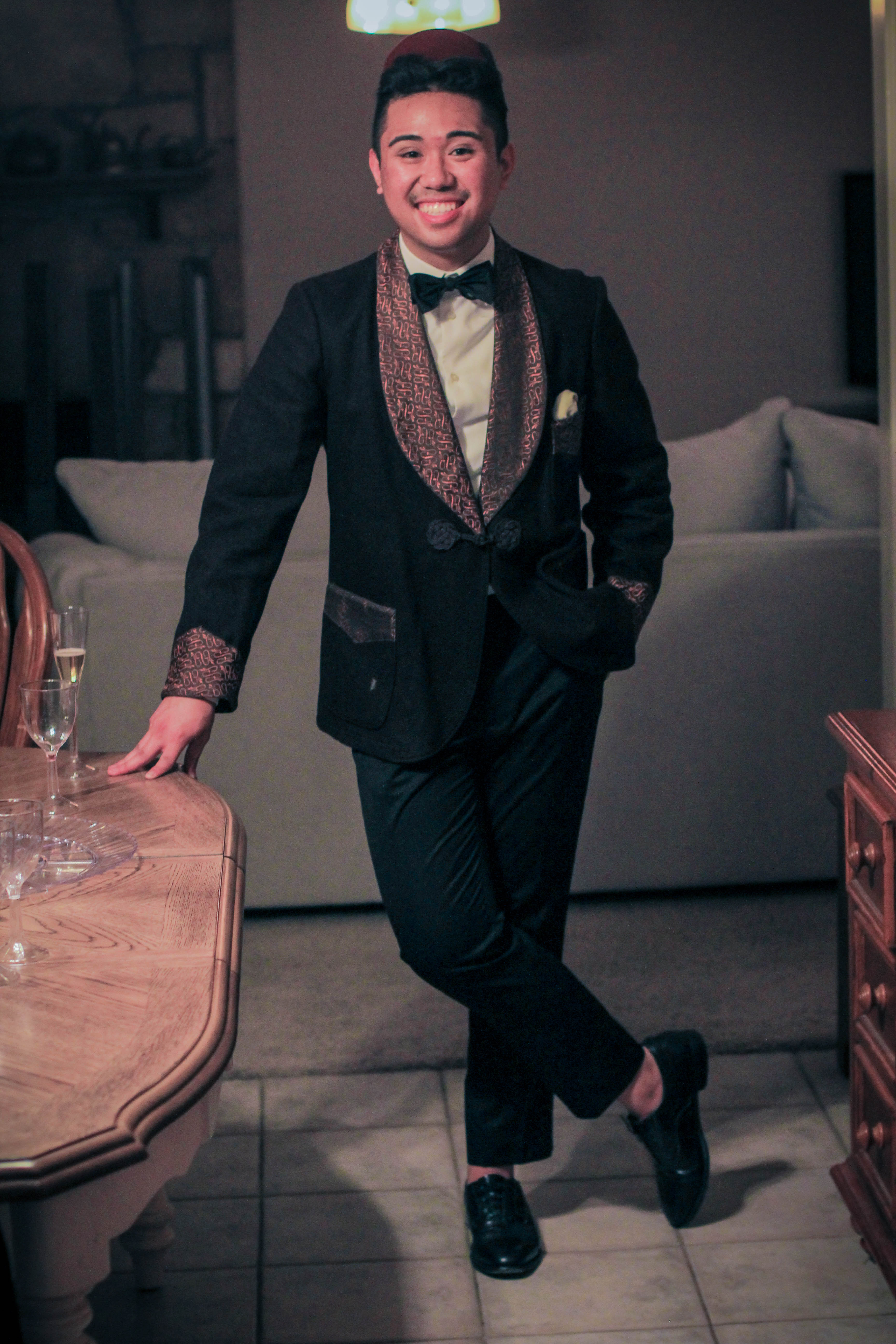 This jacket is one of the most elegant pieces I own.  My smoking jacket is from the 1930’s, cut sharply from a dark burgundy wool with silk lapels.  Even though traditional smoking jackets are soft and unlined (like Spencer’s), mine is soft, yet structured.  Like Spencer’s, my jacket has patch pockets which are adorned with the same silk pattern as the lapels.   Details like the lapel pattern or the frog button closure (a braided toggle) are what to look for in smoking jackets.  These pieces are definitely meant to stand out. 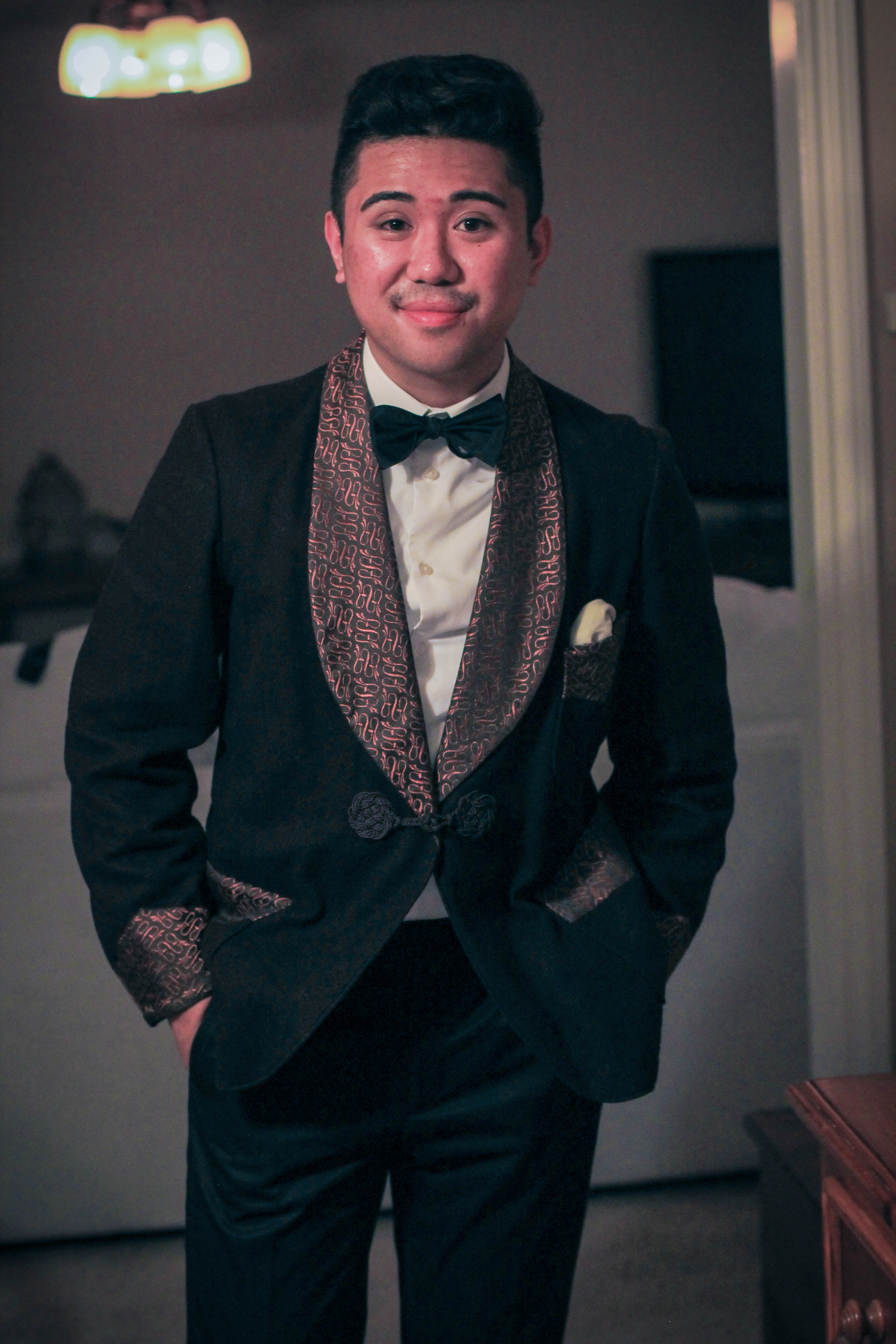 Even though smoking jackets are supposed to be worn with business wear, I opted to pair mine with evening trousers (tuxedo pants) and a black silk bow tie.  Basically, I wore a smoking jacket instead of a tuxedo jacket.  I believe the subtle burgundy of the jacket contrasts well with the rest of the monochromatic look. Yes, sockless is an odd look for such a formal attire, but I didn’t have any dress slippers.  I’d definitely suggest those instead of the cap-toes I wore; plain black shoes go best with formal evening wear. 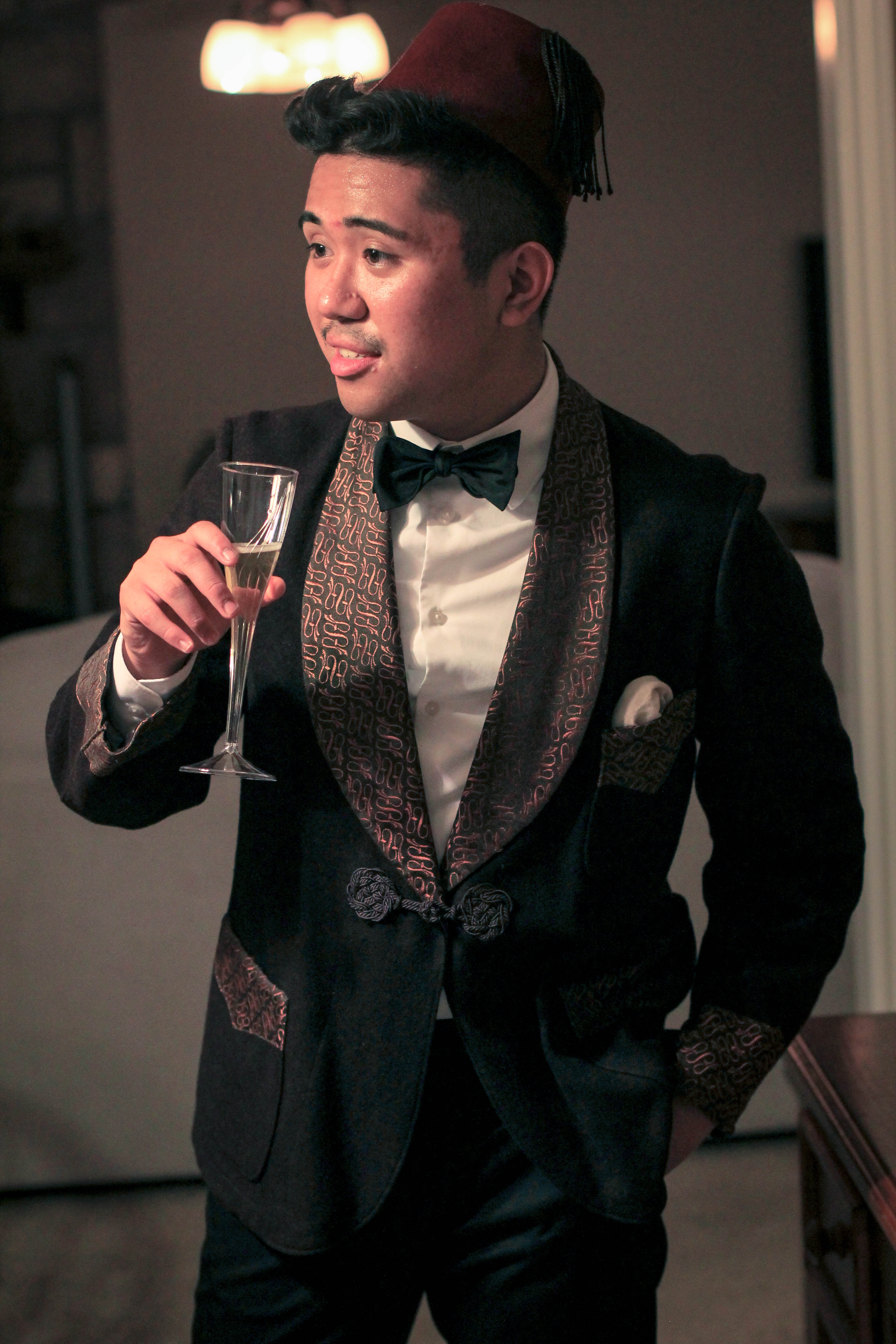 Each of us brought our own unique piece to our outfits (other than the smoking jacket.  Spencer had an epic tie, Jay had his pipe, and I have my fez.  According to my quick and elementary research, tarbouche is an Egyptian word for a hat resembling a fez.   That’s about all I know about this piece!  Even if it’s modern, it’s a cool item to own and great to wear at dinner parties. 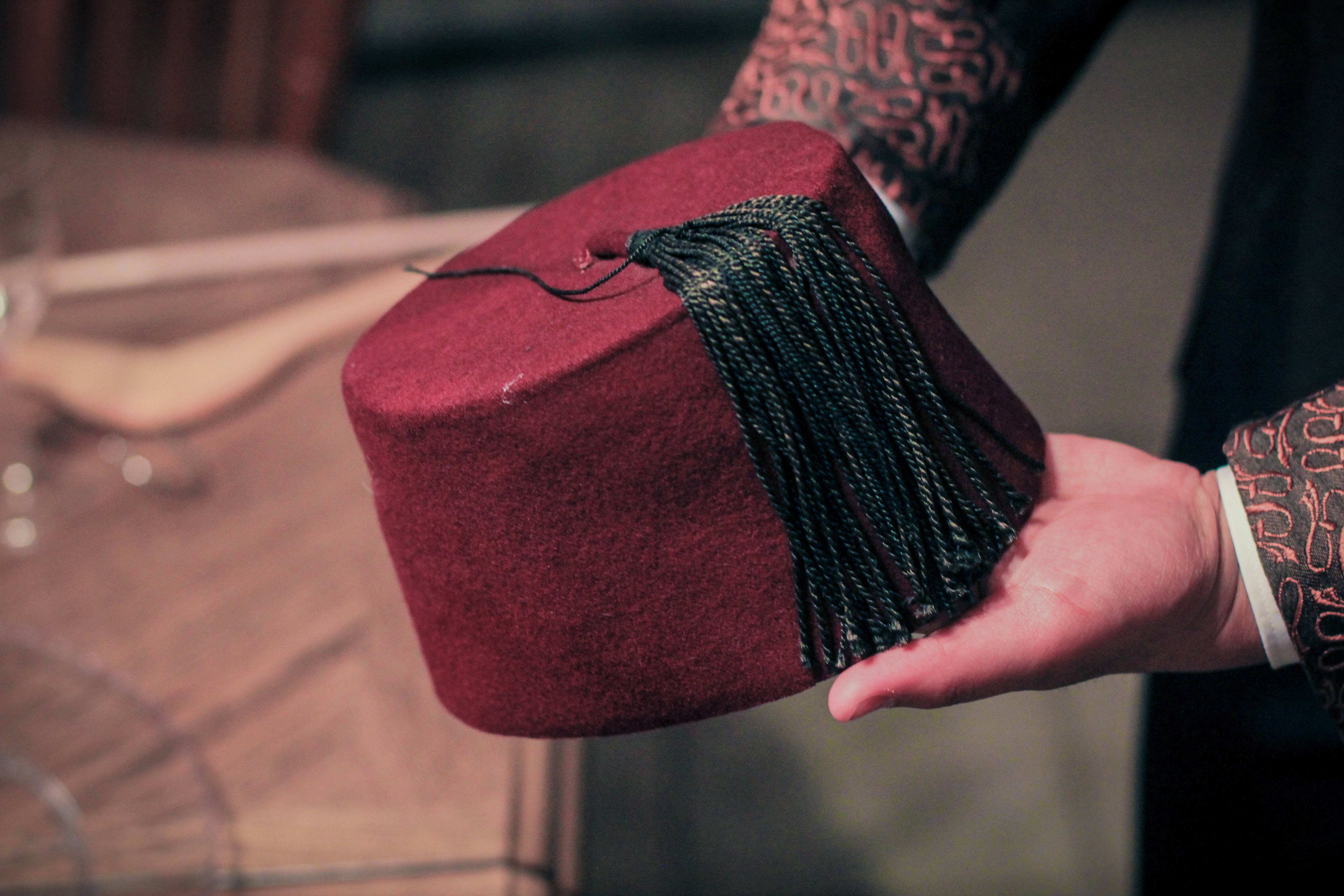 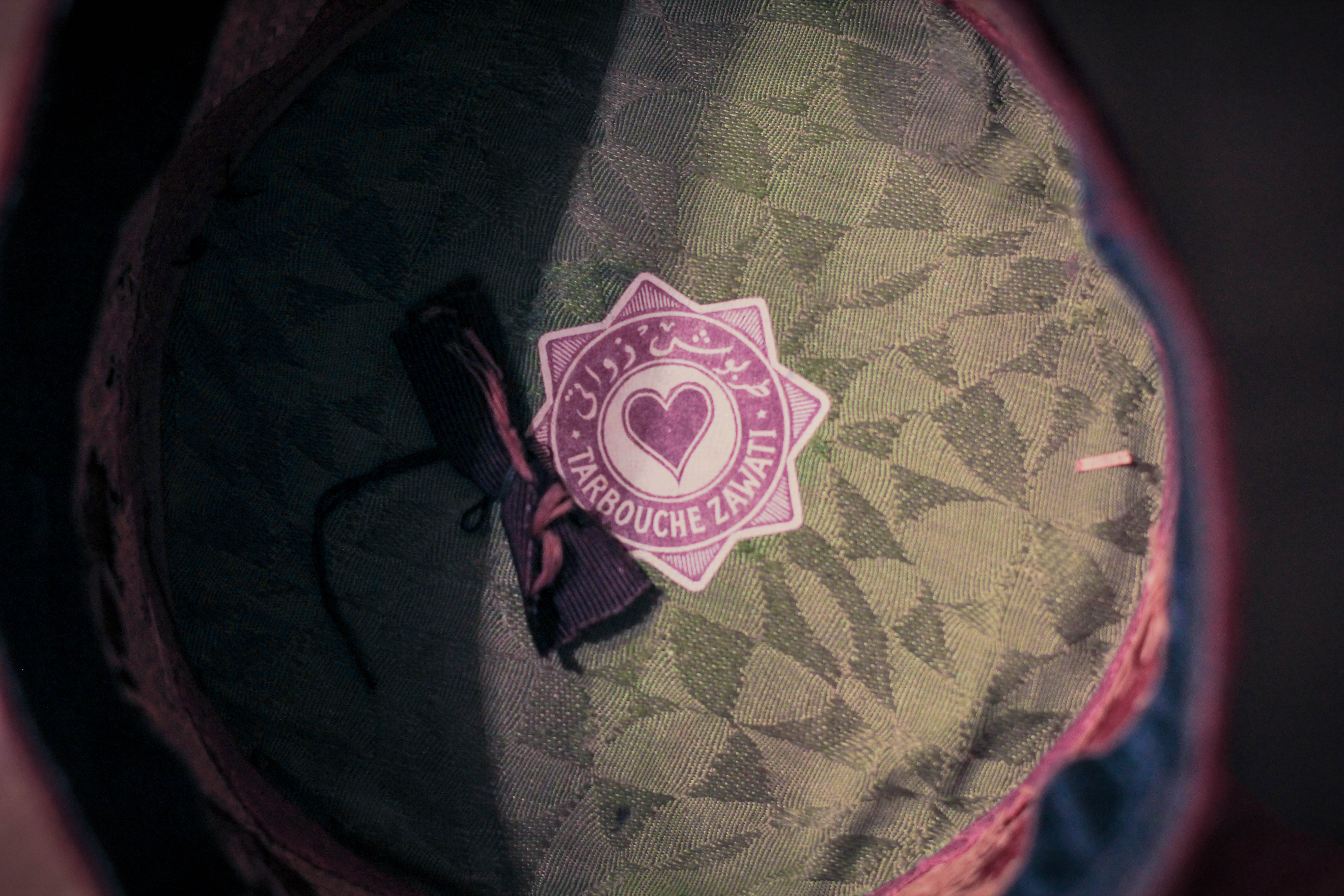 As you can see going to a formal party doesn’t have to be a typical dark suit/white shirt/black tie affair.  Dressing up should be fun! I could see this post being an alternative to those disgusting tuxedos you wear to prom or other banquets.  If you really want to stand out and look classy among st the sea of dark suits, invest in a vintage smoking jacket.  You’ll look hot. 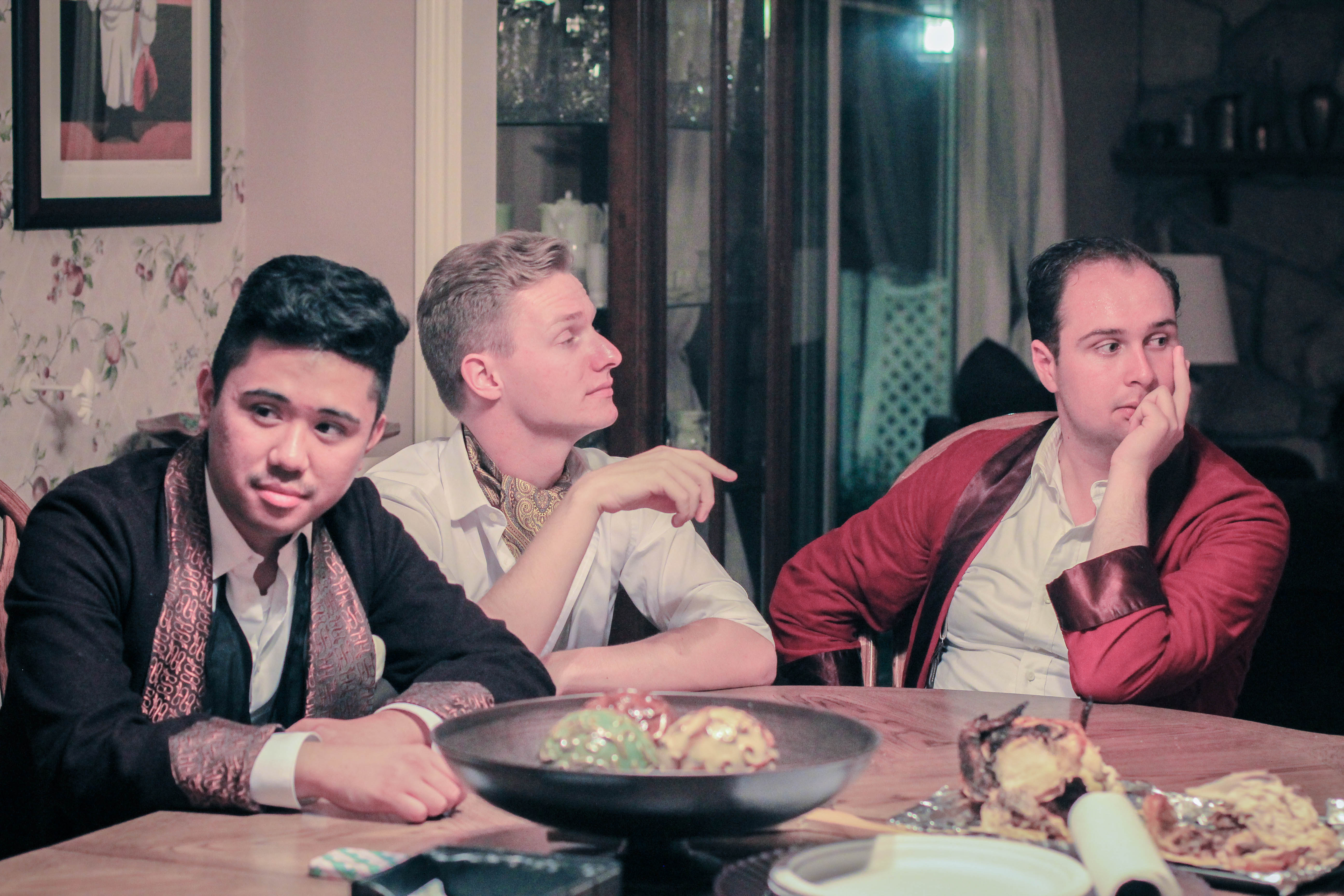