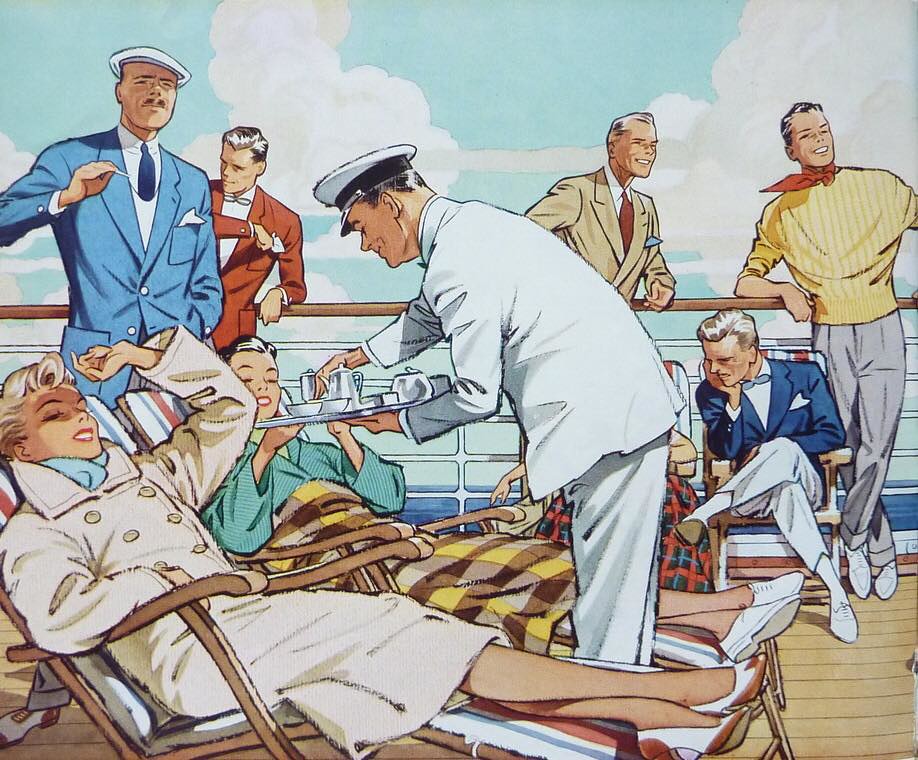 Before airplanes and road trips took over America, the cruise was the premier vacation.  You get to sail to exotic places while dining with the captain, play shuffleboard with your neighbors, or simply take a stroll on the deck to gaze upon the starlight reflected on the sea.  Back then, passengers didn’t wear oversized hawaiian shirts or lengthy board shorts.   In the 1930s, people wore their very best while on vacation.  They had casual jackets and pants that today would look too dressy, for even the office.  Keeping with tradition, Spencer and I wore our Sunday best for a little Art Deco cruise on the grand Queen Mary.

“The Prep on Vacation” 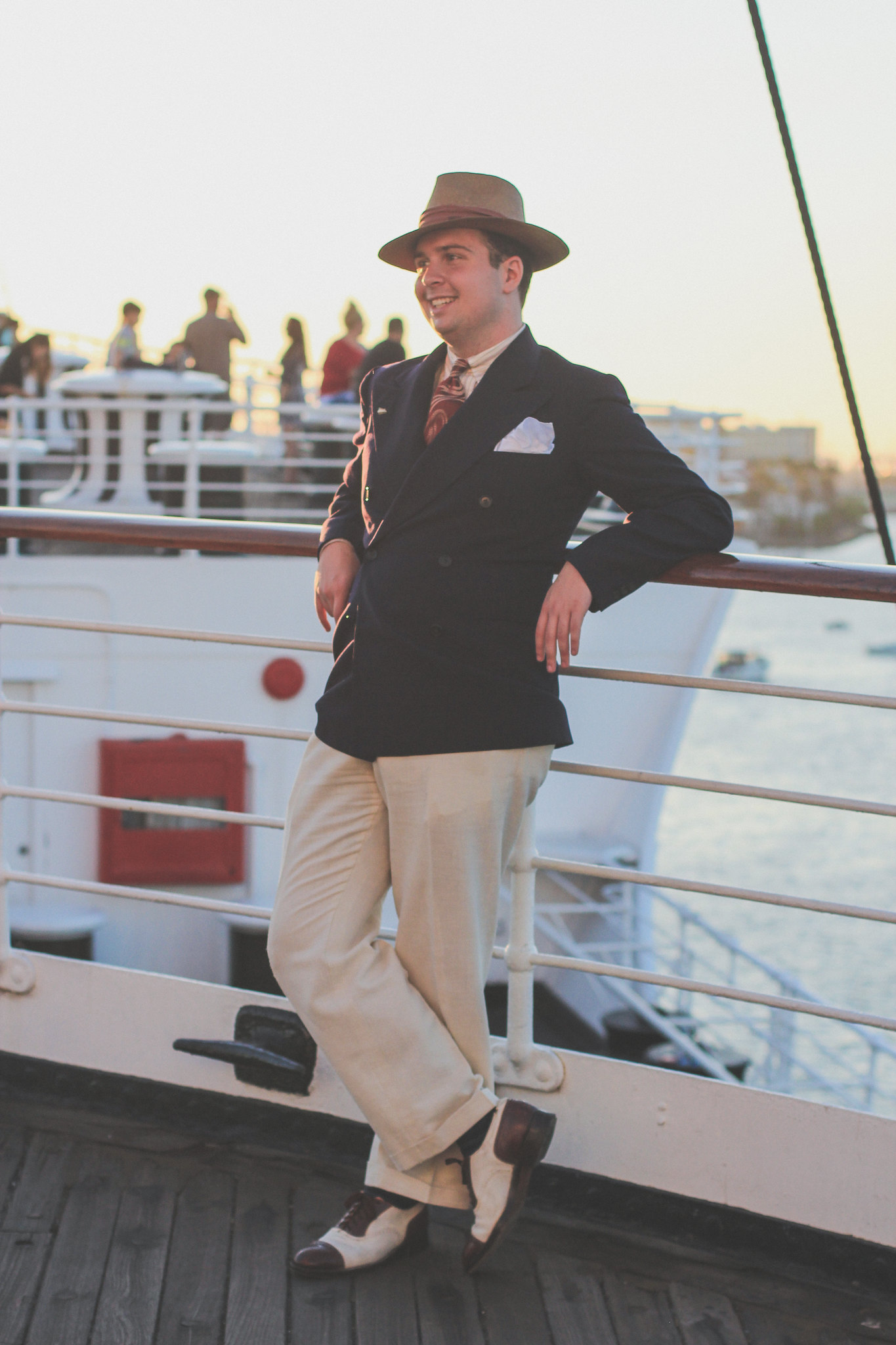 You can never go wrong with the classic American prep colours: red, white and blue.   The difference between looking like a Georgian frat boy and a dapper gent lies in the details.  By wearing white pants, a blue blazer, and a muted red tie, Spencer keeps a classic look without screaming “American”.  However, his outfit is more than just simple colours; it’s one of those things that just gets better the more you look at it. 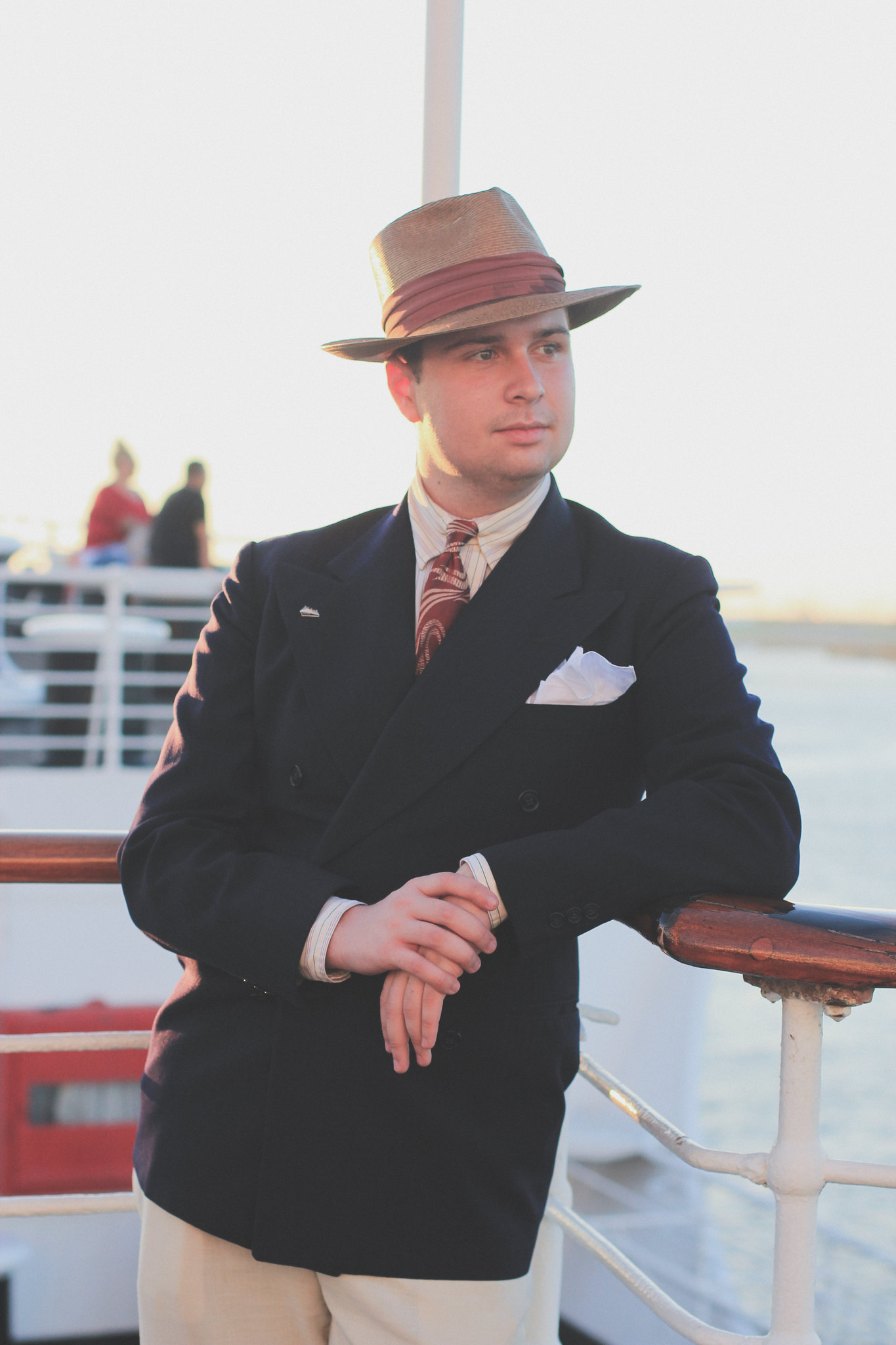 Besides his awesome Palm Beach pants that keep him cool on the hottest of days, Spencer’s outfit is filled with fabrics and patterns.   Nowadays you don’t really get cool brocade ties; everyone wears stripes, florals, or solids.  The true charm with vintage ties is that they’re unique!  It’s wearable artwork.  This particular brocade that Spencer has on has been a favourite in the vintage community. 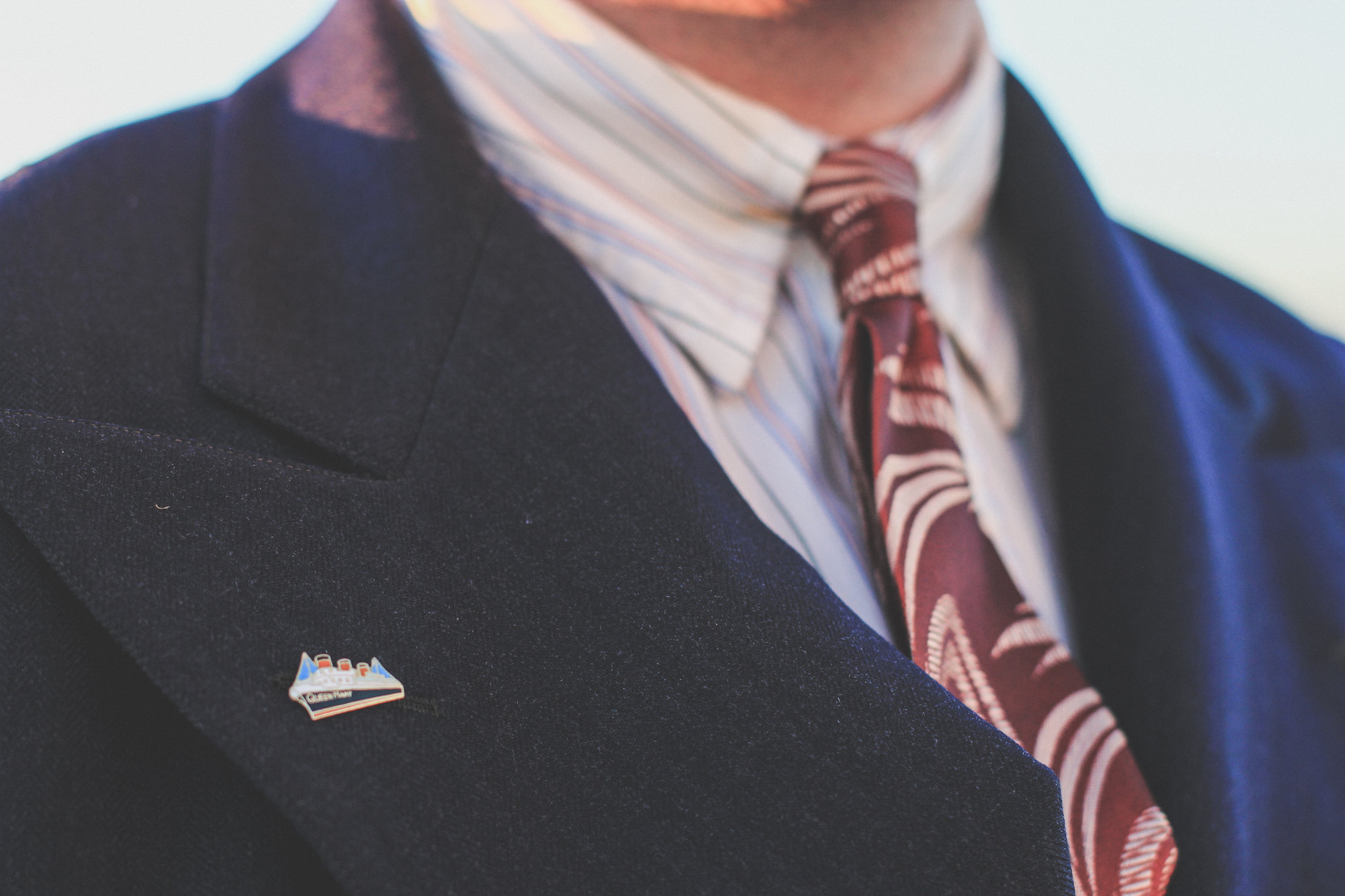 WIth the tie, Spencer wears a striped shirt.  Note that the stripes are small compared to the more medium size of the brocade pattern.  By scaling your patterns, you can definitely combine two or even three of them in one outfit.  His striped shirt is form the 70s, but the classic pattern is certainly wearable in any era. 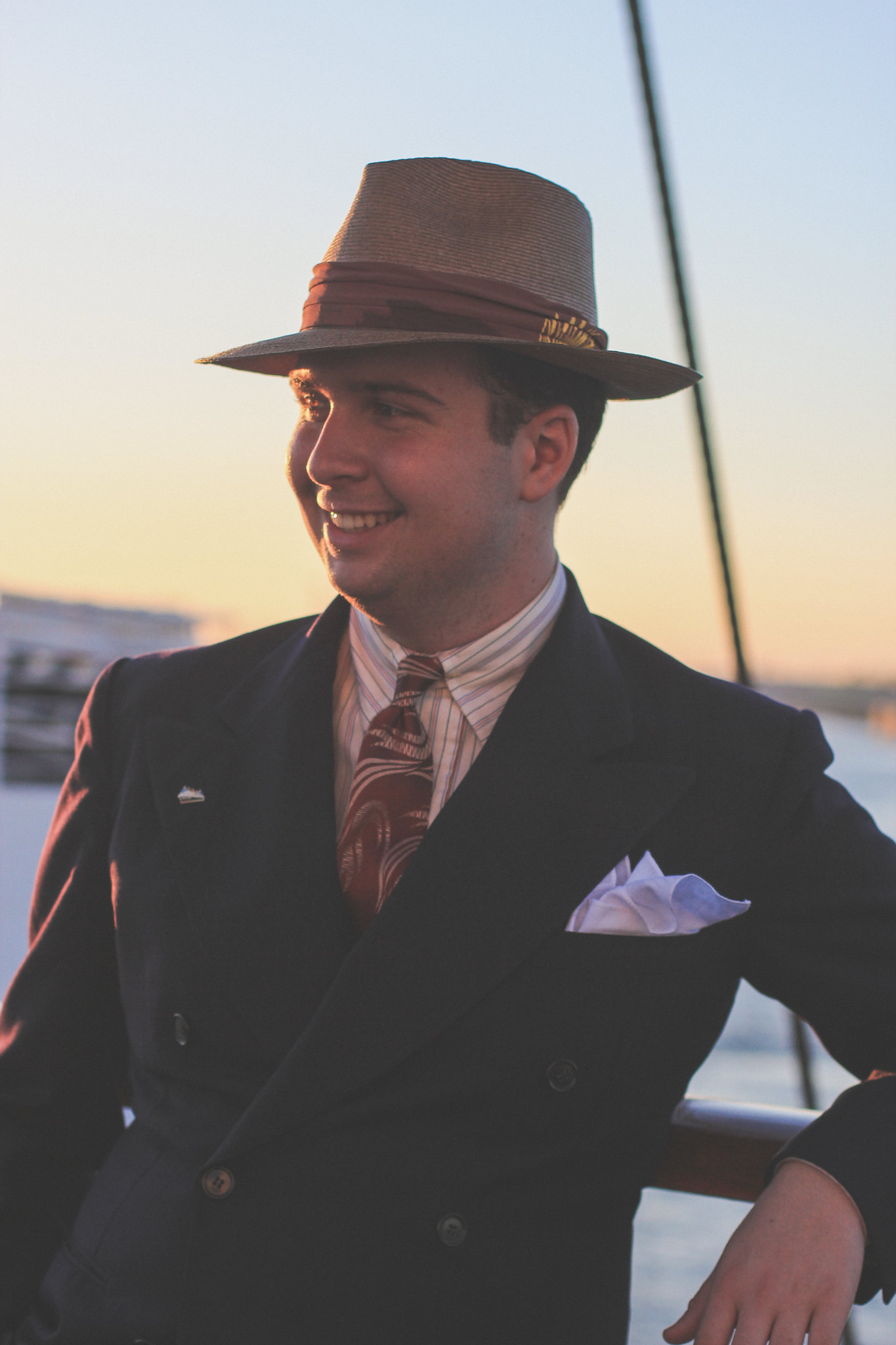 Spencer’s last details lay in his awesome 40’s Panama Hat and Spectator shoes.  You might notice that we wear our spectators a lot, but that’s because no shoe really compares to the awesomeness of the spectator. It instantly adds fun to any look! 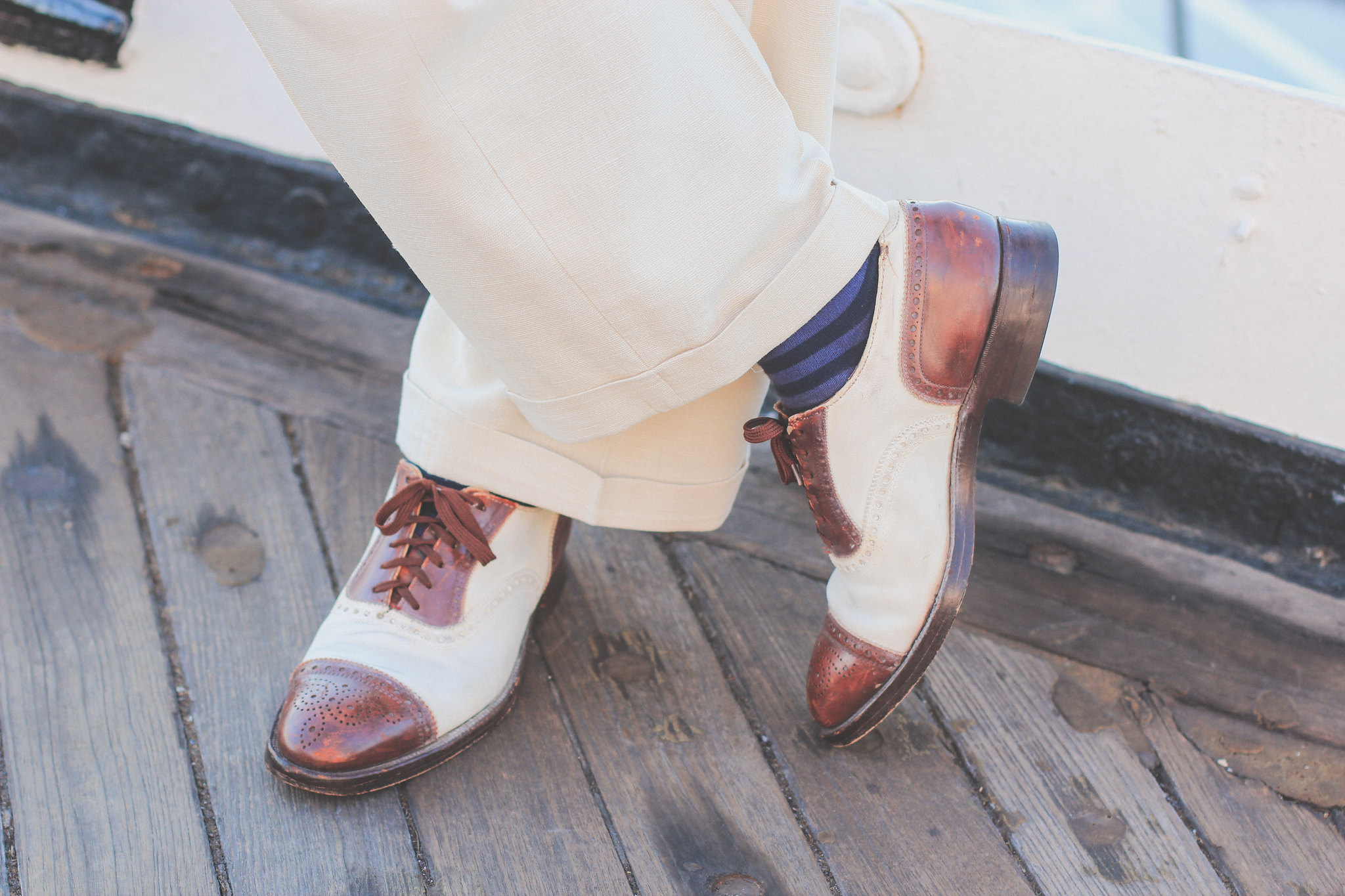 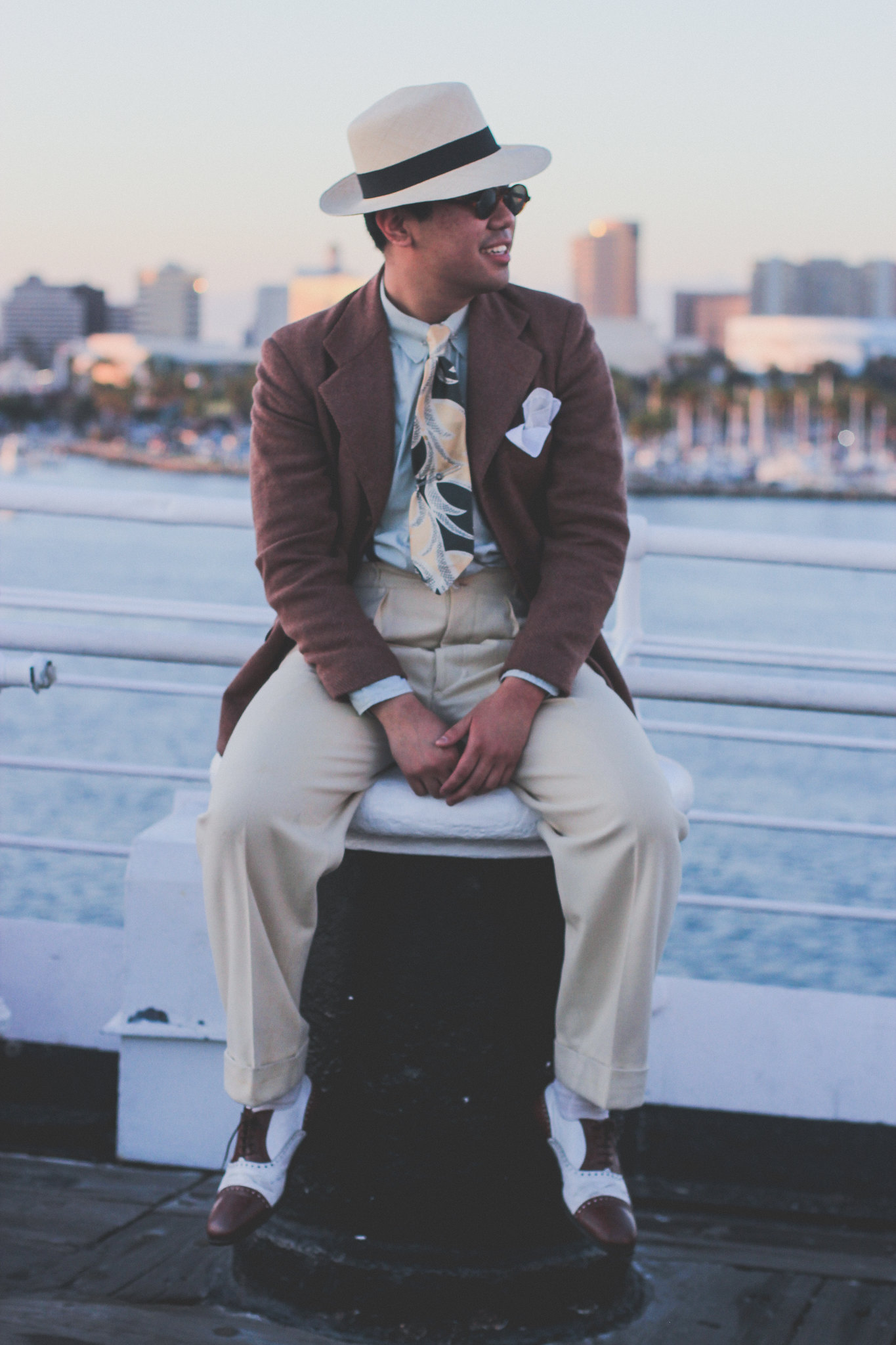 I always imagined taking a cruise to some tropical island where I could stroll around the beach and relax.  If you’re sailing somewhere exotic, why not show that in your clothes?  With that in mind, I decided to wear some brighter earth tones:  light brown and cream!  It’s like I’m wearing the beach. 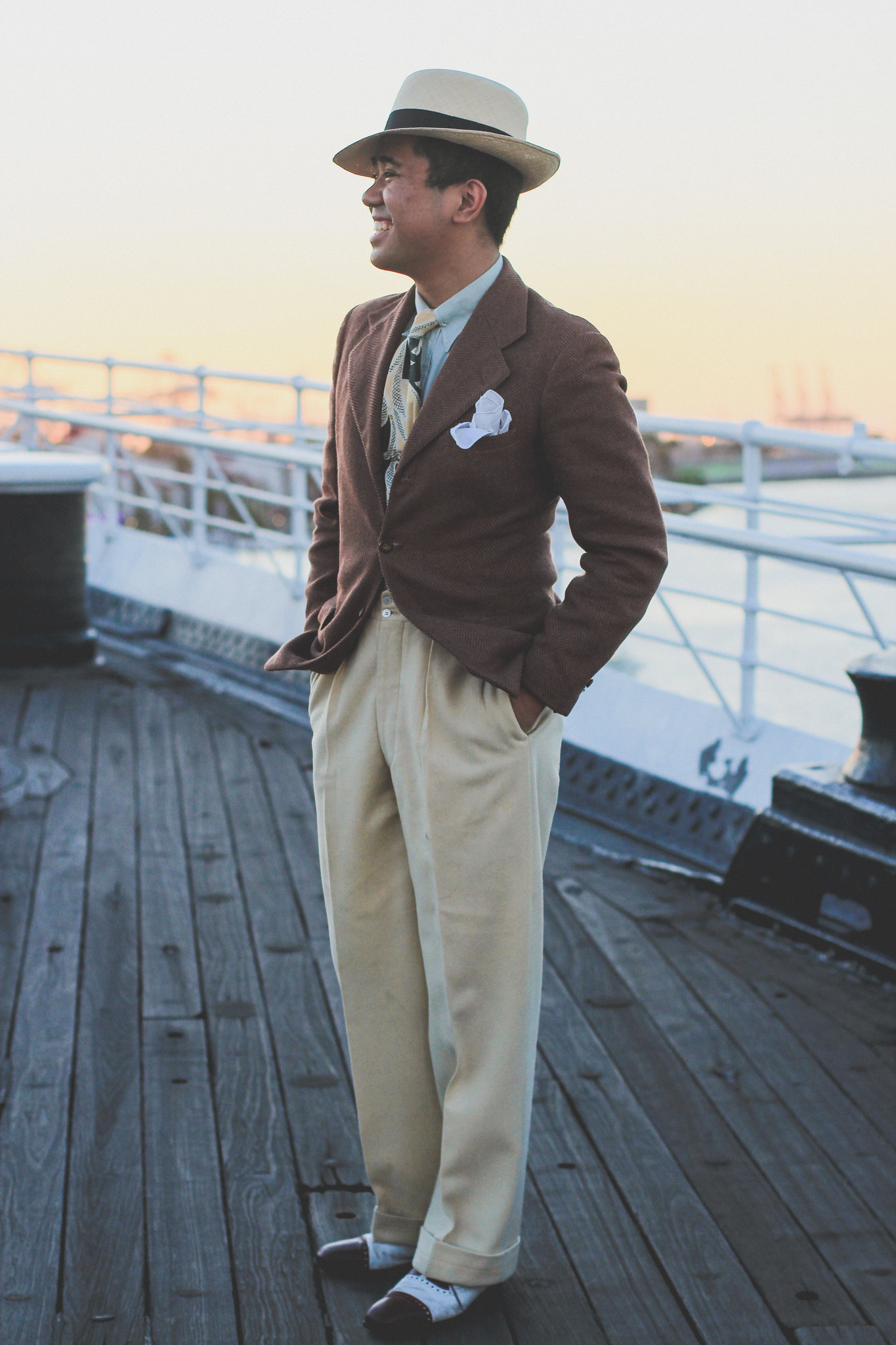 Just like Spencer, I too have a herringbone weave jacket.  In hindsight, a gaberdine jacket would have been much lighter for the hot day, but it didn’t become much of a problem once the sun set.  I’m not a big fan of plain jackets, so a majority of my clothing either has a pattern or an interesting texture. 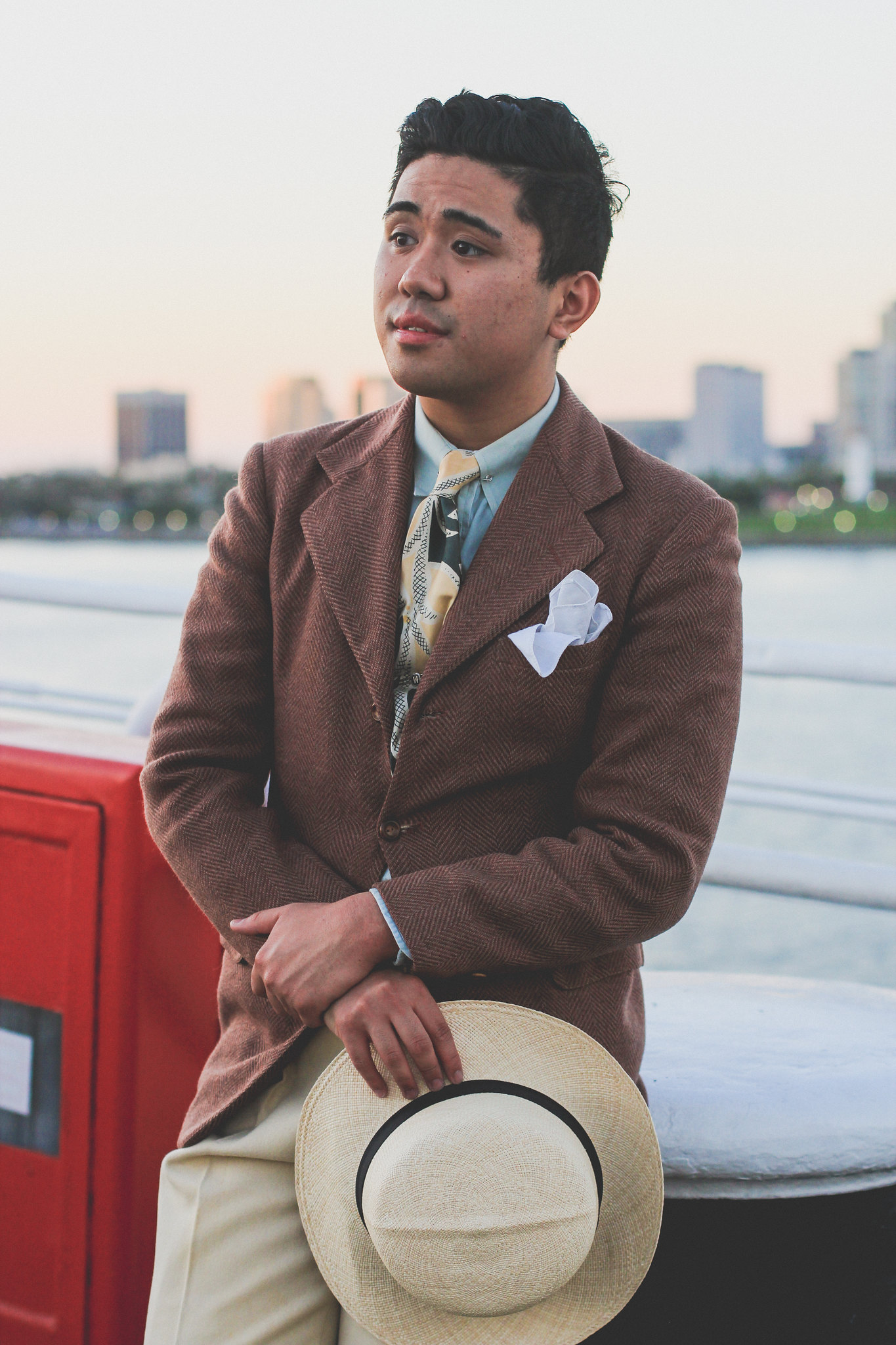 On the subject of cool ties, check mine out.  It’s not exactly floral but the colors exude the palm trees you’d see at a Hawaiian resort.  Combined with a light green spearpoint, the tie becomes the main focus of the outfit.   This practice of exuding the colors of your tie in another part of your outfit is great when you have a unique tie! However, I’d put other interesting patterns around it (like my herringbone jacket) since a boring blue suit and a matching shirt/tie combo can look a little high school. 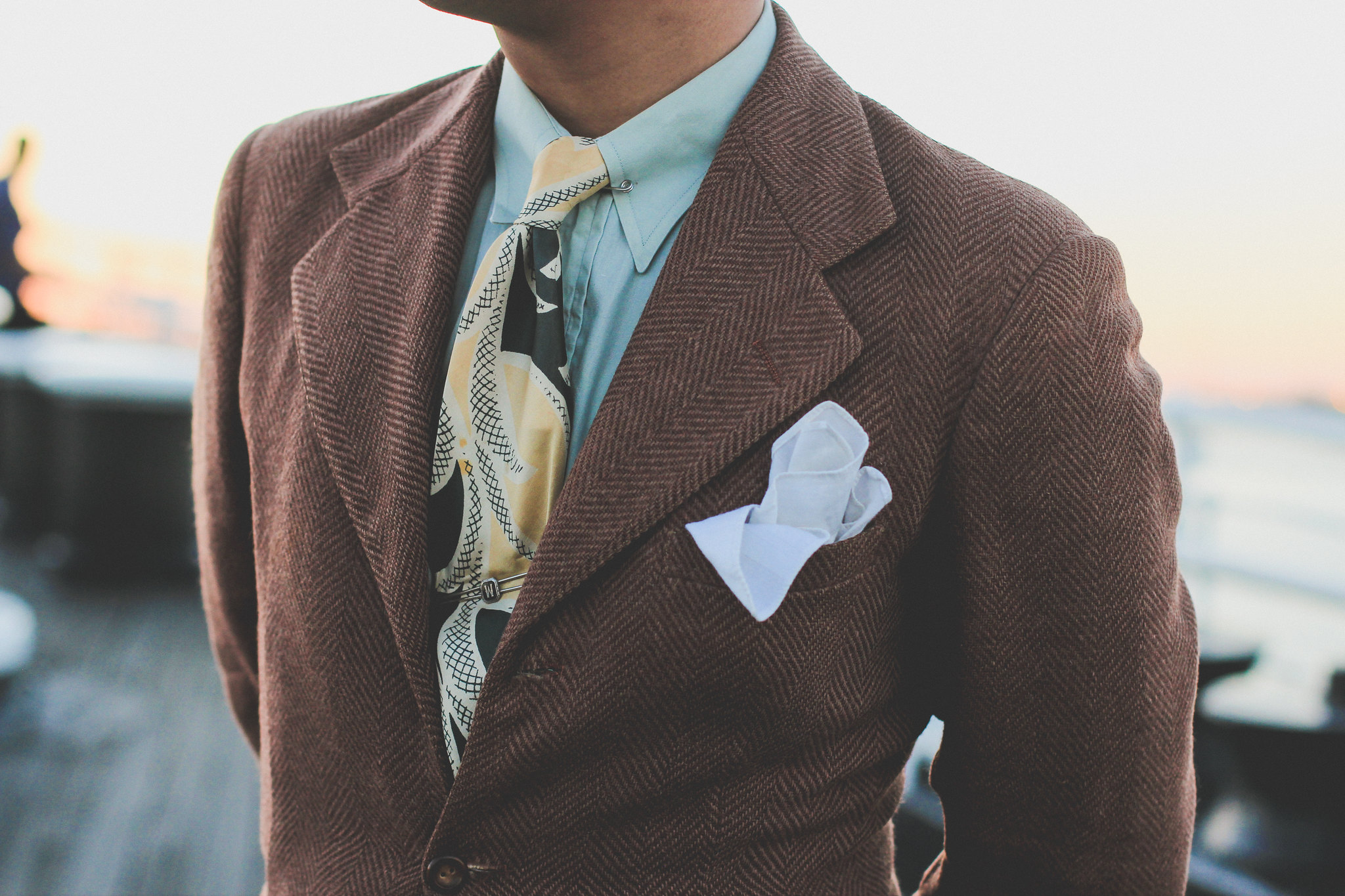 I too brought my panama hat, and this one in particular is called the Optimo.  As I’ve said in a previous post, this is the straw hat to wear when you’re going vintage.  It looks like a pith helmet and makes you look like you’re ready to go traveling in the 1930s. 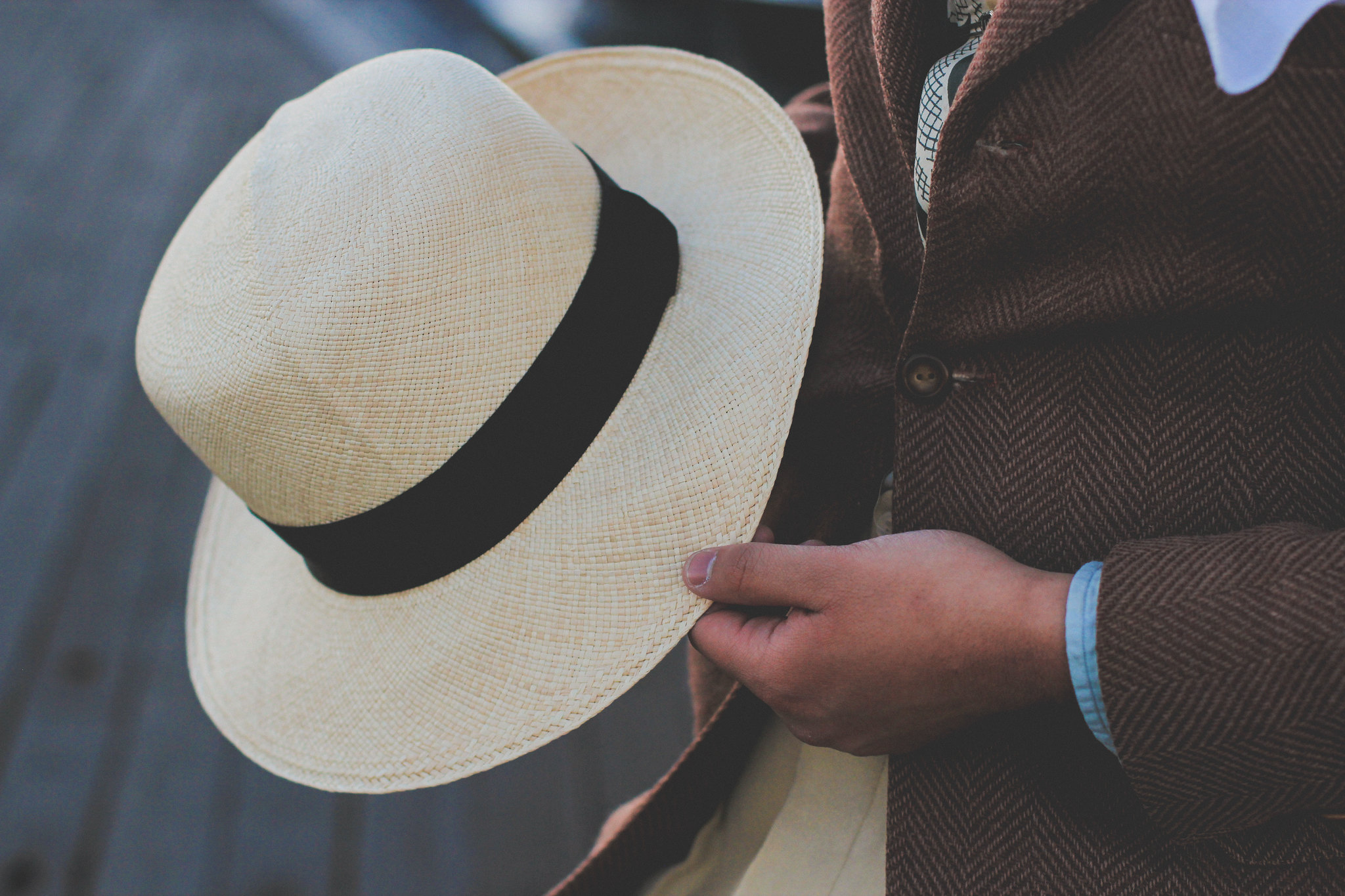 We had a lot of fun at the Art Deco festival, checking out the historical ship and catching up with our vintage friends!  On the ship there were a few vintage vendors selling everything from tuxedos and suits to genuine 1930s-40s fedoras and suspenders.  This event only comes once a year and I would highly suggest it to everyone!  Even if you’re not old enough to go drinking or don’t have the money to dine in the grand ball room and listen to Dean Mora and His Orchestra,  $20 bucks a ticket is cheap enough for an awesome walking date with your gal.  And Spencer.