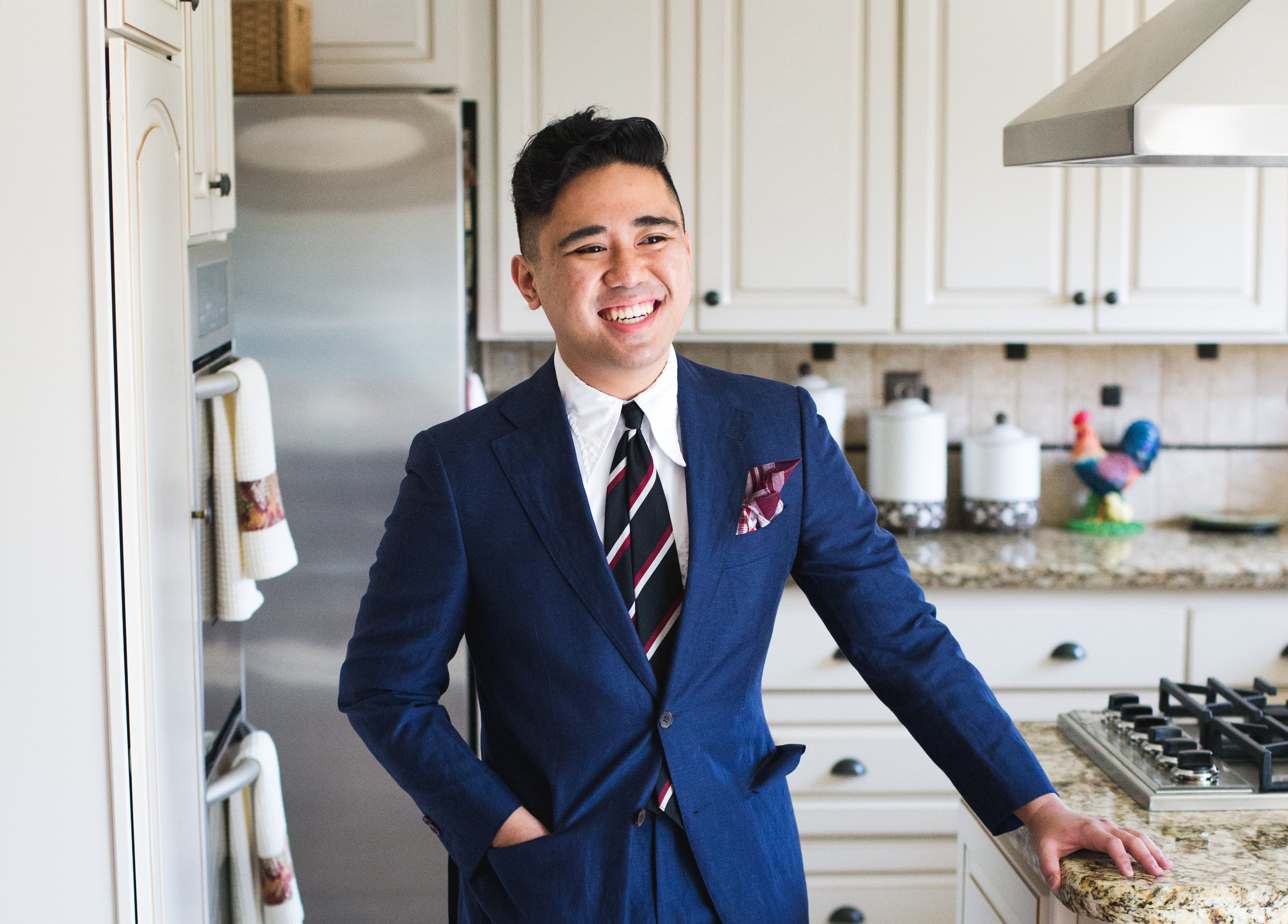 While the rest of the world may be cooling down for fall, my forecast says that it will be 90 degrees this weekend! In fact, it was 91F when I went to work at the time of this article.  So, I decided to go with a something summery without standing out too much.   Curtis Newkirk, from Beckett & Robb served as the inspiration for this outfit!

Beckett & Robb is one of the up and coming menswear places in the United States.  Like The Armoury (which I detailed here), Beckett & Robb was started by two guys who loved clothes: Jesse Yeats and Derek Bleazard.  They started in Utah and have spread to states like Colorado and Washington, with even a  California shop at San Francisco!  B&R offer more than just custom suits; they even offer ties, sweaters, outerwear, and even shoes! Countless times, you can see their staff IG accounts post an outfit which includes the caption “all B&R”.  They really aim to be the one stop shop for a man.

Curtis Newkirk, the focus of this article, is one of their shop managers.  Its actually due to following him on IG that I found The Armoury; he had posted about getting inspiration from them a few times.  Curtis has an impeccable style which stands out from his collegues.  He is constantly making measurement adjustments to nail his fit, he opts for tailored casual (with a sartorial polo), and he even rocks the high-waist as I do.  I love that he changes it up every so often to stay ahead of the game! He was also one of the first people I followed that adopted the sprezzy tie.

Enjoying a basic look, linen suit, with a silk grenadine tie. All @beckettrobb

This outfit was the inspiration for the article.  Curtis wears a blue linen suit, with a striped black (or dark navy?) tie, and suede loafers.  What I love about this is that it’s a very conservative summer outfit!  Instead of loud patterns and white pants (which is perfectly appropriate),  Curtis opts for a simpler ensemble.  You could say that this outfit is a great transitional fall piece! Fall is more about mature patterns and muted colors, while summer tends to be dominated by being bold and saturated.  The darker tie mixes well with the blue suit and white shirt.  It’s classic yet not boring in the slightest.  This is one of the qualities that separates the #menswear/dapperbro crowed from the gentlemen who actually know what they’re doing.  Mastery of both styles is key! 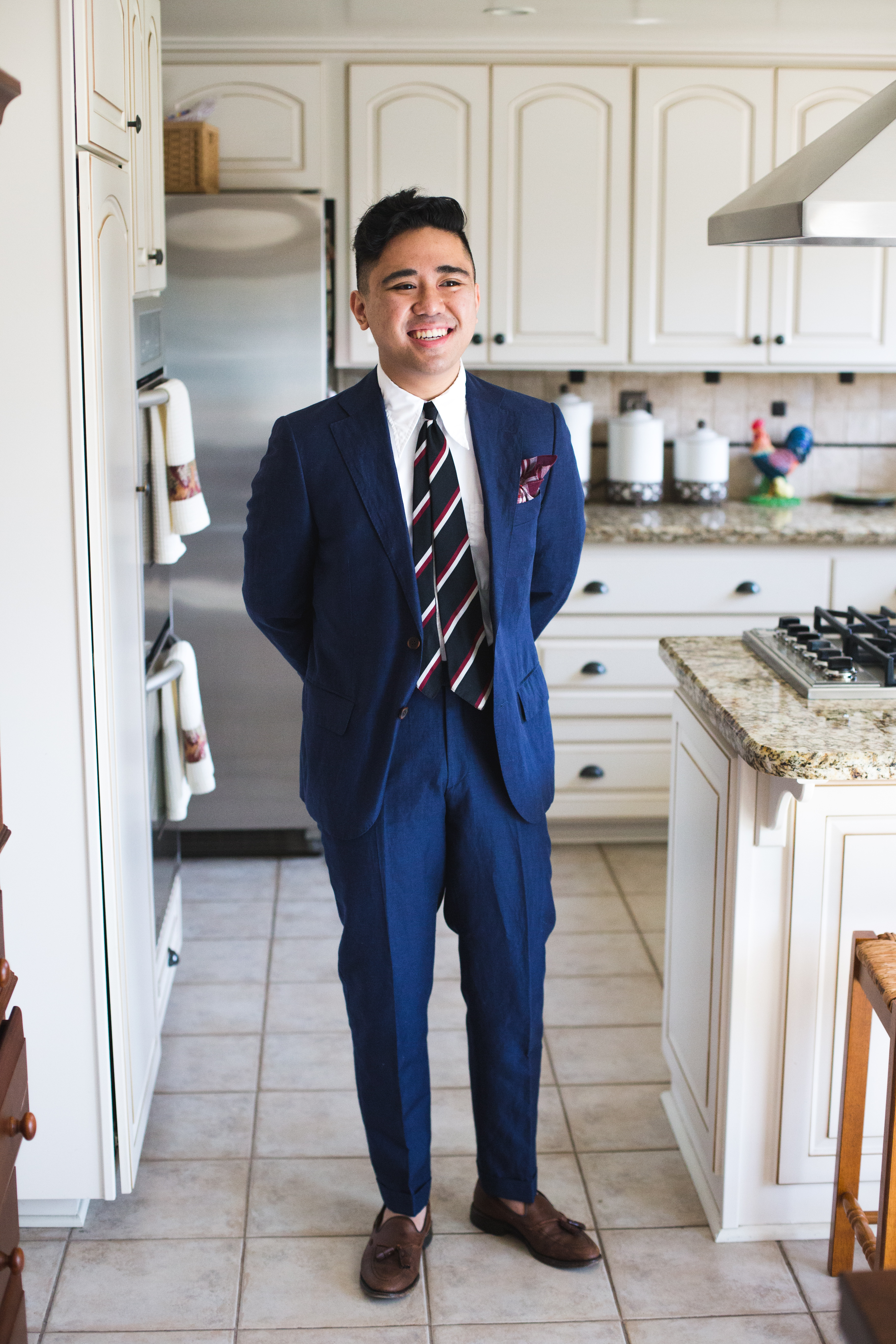 This is the suit that I wore in my previous article where I highlighted Ivy-Trad Armoury member Dick Carroll.  It’s a linen-wool number from Suit Supply that I bought last year!  Thanks to the wool, it has more structure than a pure linen suit and resists wrinkles much better!  It’s more saturated than Curtis’ suit, but this just means that we can play a bit more with color. 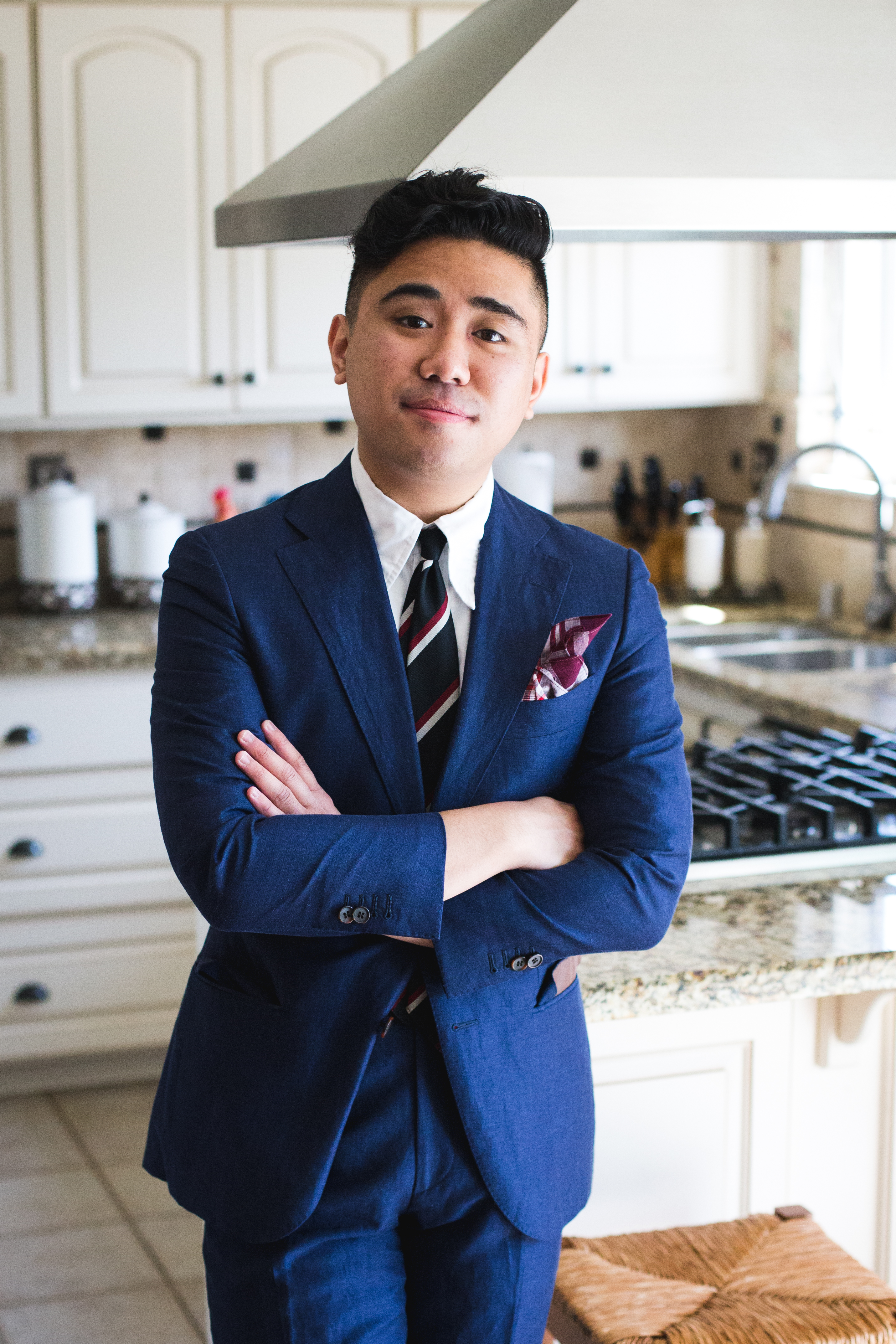 Instead of a two-tone striped tie (that Curtis wears), I opted for a tie with a bit more color.  Mine is a vintage black repp tie, which has silver and red stripes.  It’s a bit more playful, and the addition of the burgundy plaid pocket square (puffing out as they did in the 1940s) accents the red in the tie well without being too matchy-matchy.  Including colors allows you to have fun, even though your suit and shirt are solid!

This ensemble is perfect for you business or conservative dress guys who tend to stay away from patterned shirts and suits. 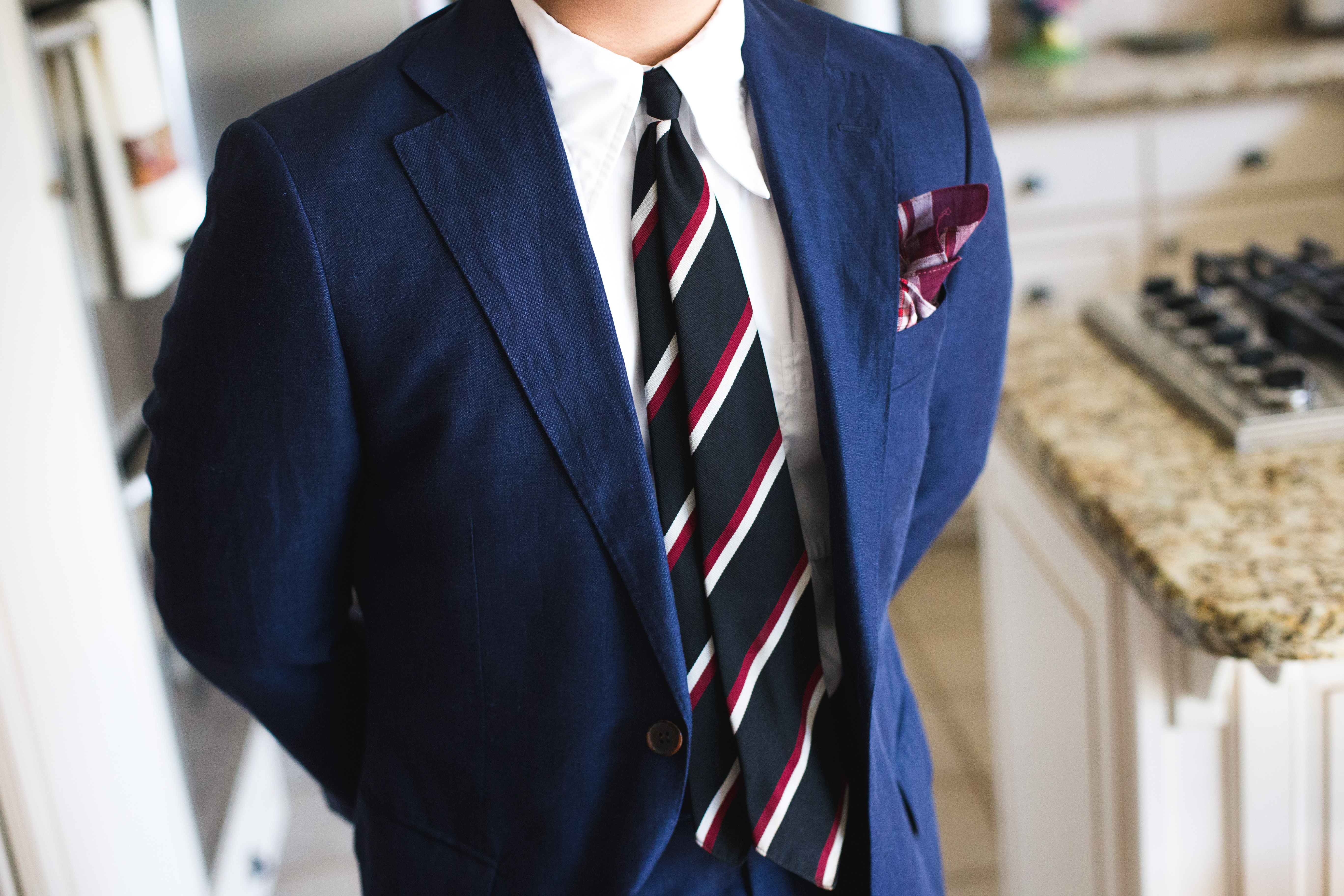 Note that I use stripes for color instead of a stupid floral, “hipster” tie.

Repp stripe ties have been around for a long time and are a definite menswear staple. They aren’t usually flashy and can be found on preppy, ivy, and traditional outfits! In fact, that’s why they have so much appeal: they’re a classic way to inject color into your outfit.  It may be trendy to wear horizontal stripe ties or florals florals, but nothing beats the classics. 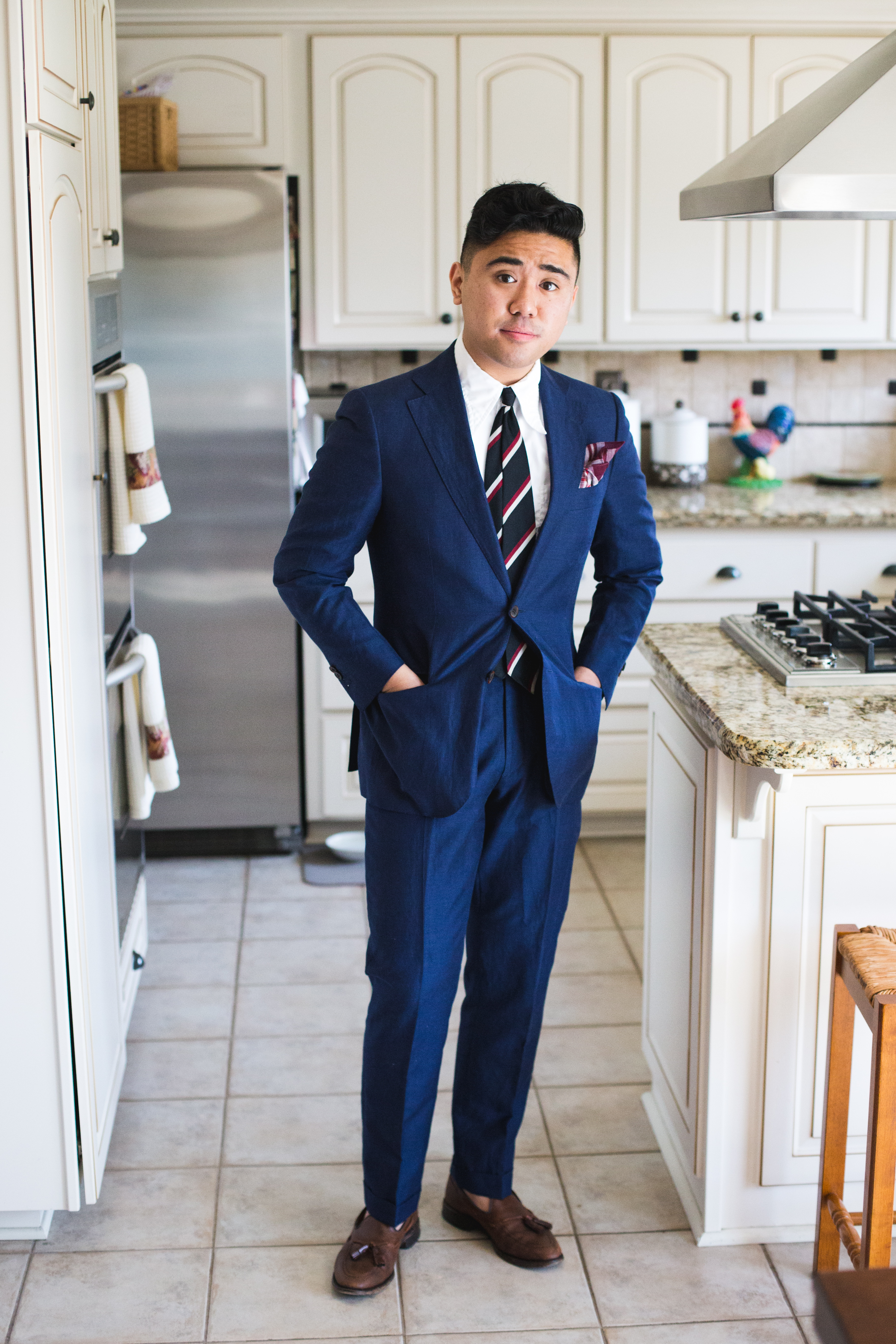 Going sockless with loafers lets people know that this suit isn’t for business, it’s for pleasure.

While these aren’t the most crazy summer outfits, I think that there is beauty within the simple and subtle. Instead of going with a patterned shirt or suit, why not just go with a patterned tie? And for that matter, try a classic repp striped tie instead of what most guys wear.  A solid suit and tie really allow the tie to pop; it’s a great way to dress for business or other formal settings if you don’t have too many patterned clothes.  If you prefer to stay classic and solid, allow yourself to have fun with ties and pocket squares! Stripes are definitely the way to go.

It’s also important to note that this outfit has ideas that can be utilized later in the year! The suit featured in this article is linen (a summer fabric) but the theme of using a blue suit, white shirt, and striped tie can be used with flannel, worsted wool, or even tweed! No matter the fabric, the repp tie will be an excellent match. If you get one in a nice silk (not too much texture like a knit or madras tie), you’ll be able to wear it year round, with your linens and your wools.