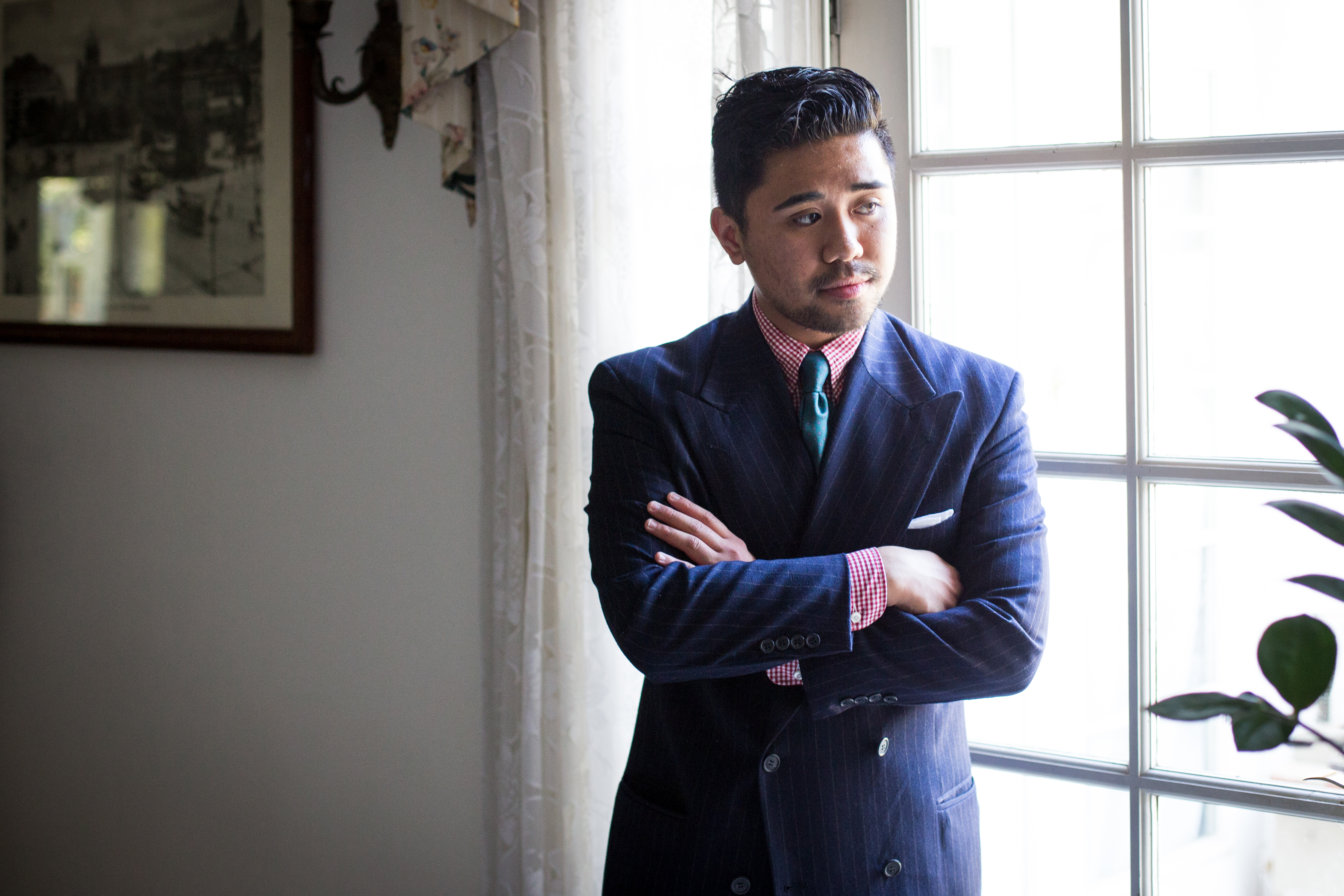 It’s not everyday that you find something cool at a thrift store.  And its definitely not an easy task to make it wearable.

eBay is the main place where I get my suits.  I’ve found true vintage 1960’s suits and “pretty alright” 1990’s suits that I’ve all gotten tailored and had amazing results with. It helps that eBay is designed to be curated and organized, allowing me to sift through thousands of listings by era and size.  If you want to get a suit from the 1930s, you can either search for it by name or just go through the vintage clothing section and select “1930s” as the desired decade.  Listings found will usually have measurements posted, along with images that you can use to decide whether or not its a good purchase.  Goodwill is much different.

At Goodwill (and other thrift stores) you are allowed to actually try on the garments in order to determine if its a good fit.  However, the selection at most Goodwills are terrible.  It’s just a bunch of clothes donated by members in the surrounding community.  This means that certain stores are better than others, based on the neighboorhood.  It is this fact that its difficult to find something great at Goodwill.  You might get lucky once or twice, whether its a vintage garment or a modern one, but its not always ideal to depend on for great pieces. However, when you do get lucky it’s important to grab it right away since it might not always be there! Since its not curated, you can definitely find a great piece for dirt cheap.

At one of my local Goodwills, I found a $20 pinstripe double breasted suit made of an extremely soft and luxurious flannel.   The jacket was definitely large, with a baggy chest, wide shoulders, and a low button stance; the jacket was also super long, extending past my fingers.  The pants were another story as the waist was pretty snug (sitting high on my waist) while the cuffed ends hovered at my ankle.  Additional details include a lack of a jacket vent, double pleats, and suspender buttons; the name on the inside say Bill Blass. These details are the hallmarks of a 1940’s suit, but the label definitely makes it from the 1980s-90s.  Perhaps Mr. Blass was inspired by the golden era!

It’s not bad for a vintage look, but definitely too roomy for a modern suit.

Taking in the jacket is definitely needed.  Pinched the back to see what it would look like tailored!

Pants look great, just needing a taper and a slight hem up.

This was a monster to tailor.  Here’s what I had done:

Shorten Jacket (but not too much)

Shortening and taking in the jacket was the biggest priorities. Like I said in my previous post, shortening a jacket should be done with extreme caution as it messes with the proportions of the jacket.  I did shorten this jacket a bit, but I couldn’t get away with too much as the button stance was already pretty low!

Taking in the jacket seemed like a simple job, but there is a definite lack of waist suppression.  This is due to the original boxy shape of the jacket.  It was going to cost an extra $50 to fix this issue (by opening up the sides and darts and taking in the jacket), but I opted against it.   Let me know if you think I should make more adjustments!

The Suit After Tailoring 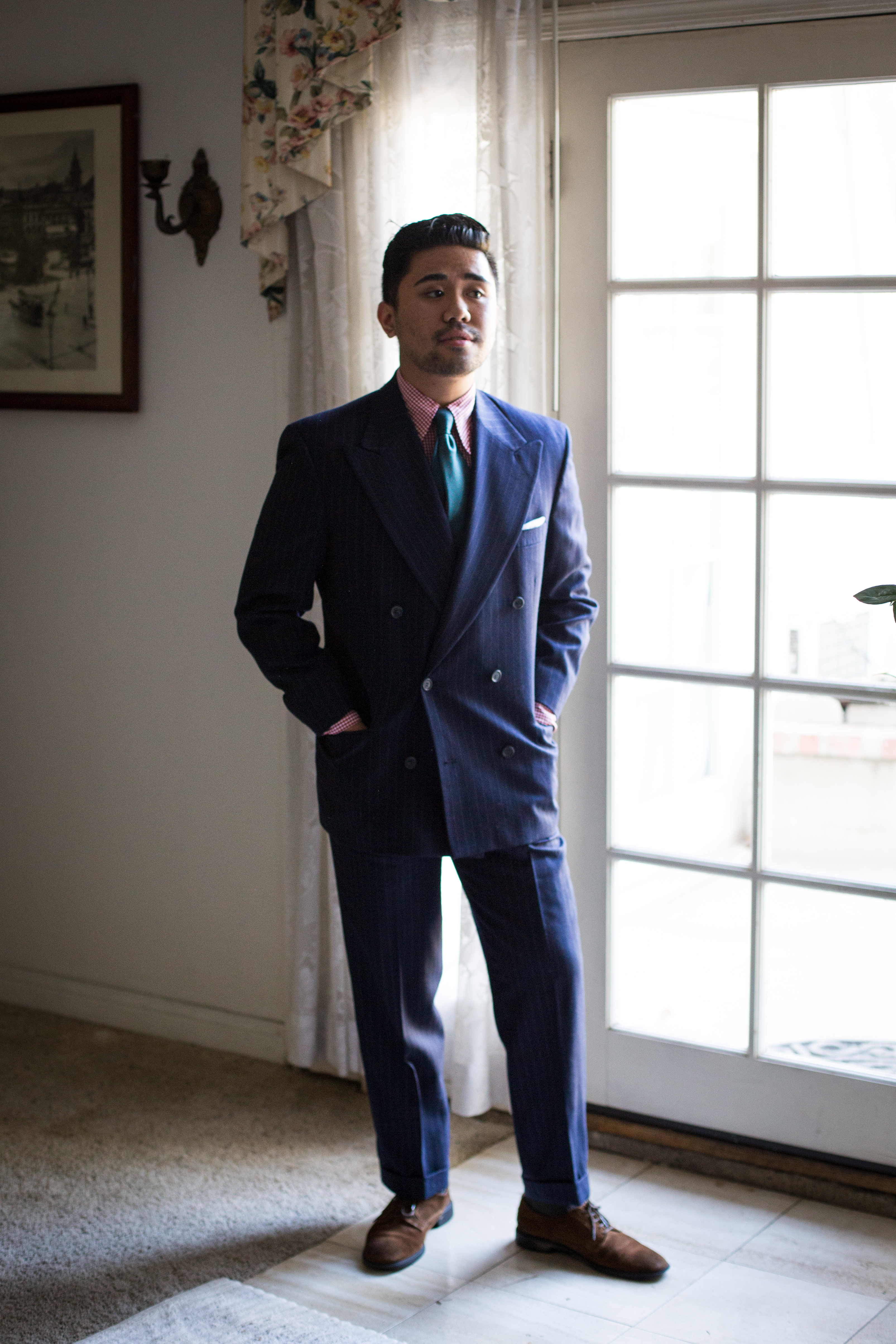 Here it is!  The jacket has been slimmed down, sleeves tapered, and pants definitely made better.  It still has its 80s/90s roots, but it made into a modern interpretation.  It retains the large shoulders, but everything else is made more proportional and no longer looks too much like a zoot suit.  Overall, I will say that it is reminiscent of the bold look of the late 1940s and early 1950s, where suits had slim yet exaggerated features. 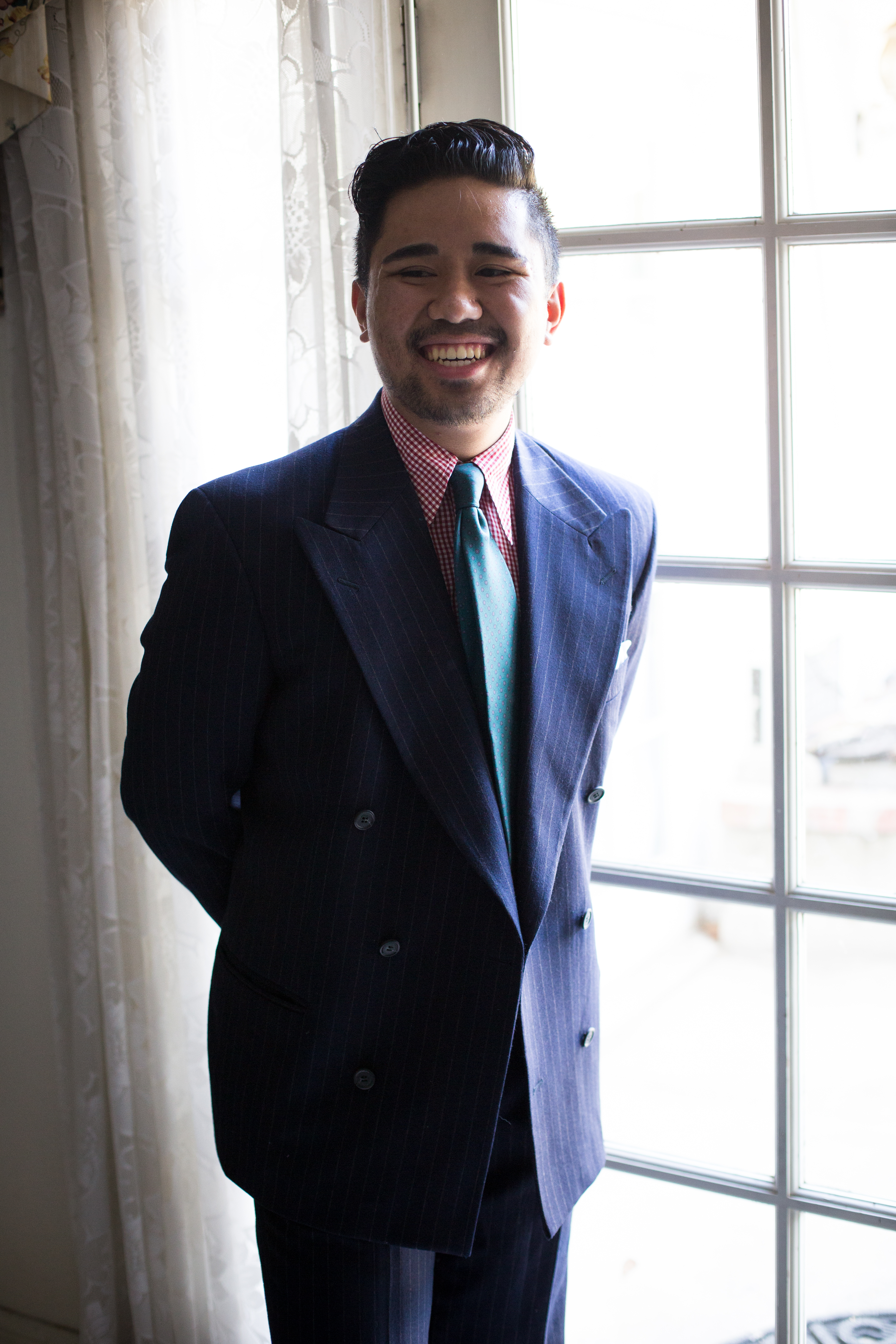 The jacket looks very good unbuttoned and drapes nicely.  Even though the lapels are quite large (which  I like), it definitely has a particularly low button stance, which does mess with the proportions of the body.  That is the main reason why I couldn’t shorten the jacket too much.  Note that you can always check this just by looking at where the last button lies on the jacket.  If its below the pocket line, you can bet that the jacket will button very low on the body.  However I will say that while the buttoning is low, the lapels “meet” high on the chest which prevents the suit from looking like this, which shows way too much shirt akin to a deep vee neck shirt.  It’s very 1940s bold era influenced, but I think it’s still a well designed suit. 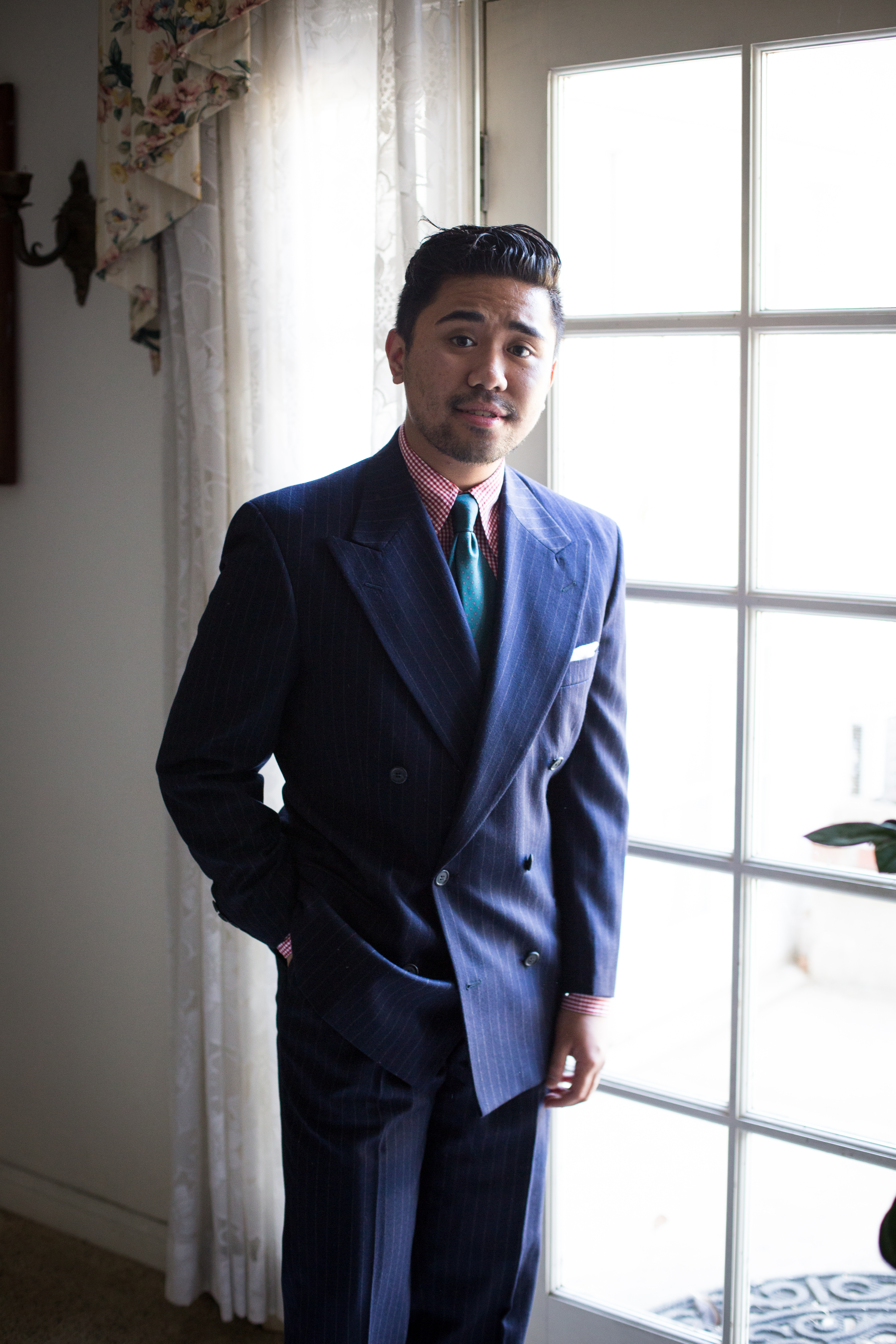 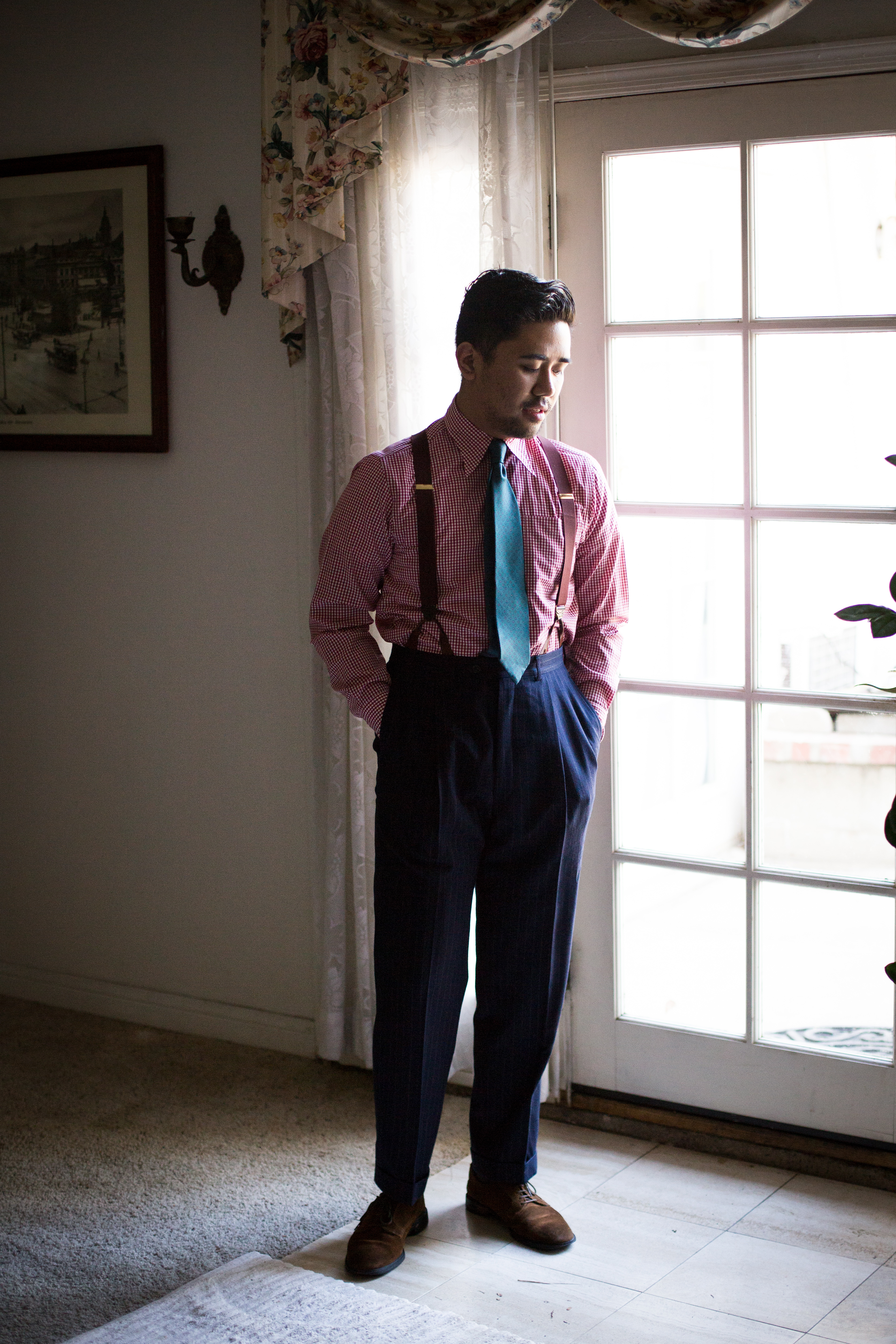 I am particularly proud of the pants as my tailor did a fantastic job.  Even though the pants are double pleated, he was able to slim the thighs and taper the legs down to my preferred opening of 7.75″.   The drape is great and the legs end right where they should: barely kissing the top of the shoe.  While this wasn’t the same tailor who did my previous pair of pleated pants, I already knew that the alterations could be done!  I’m starting to really dig pleats (and double pleats) and now that I know both of my tailors can do the job with great results, nothing is stopping me from raiding thrift stores and getting any pair of trousers that I want! 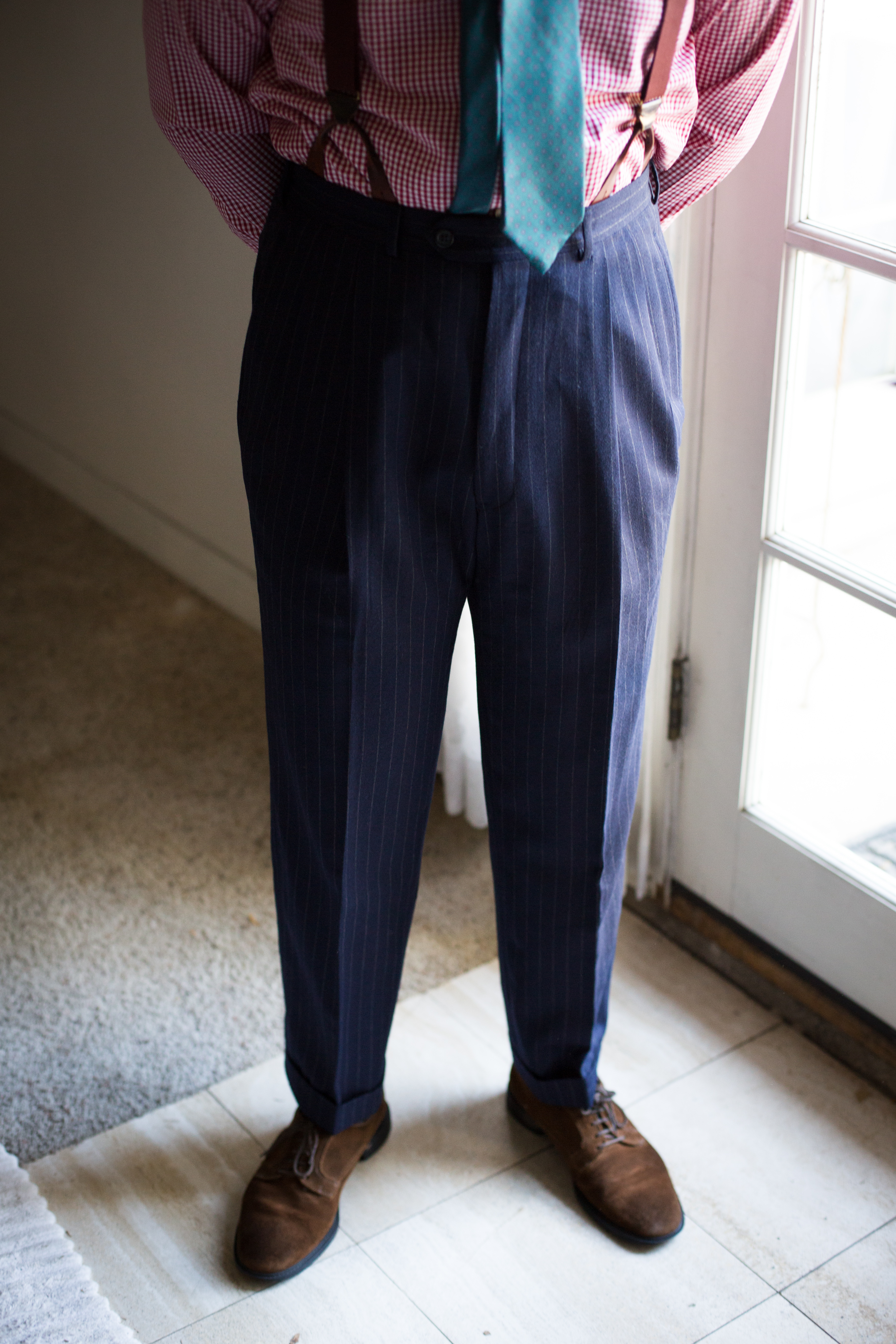 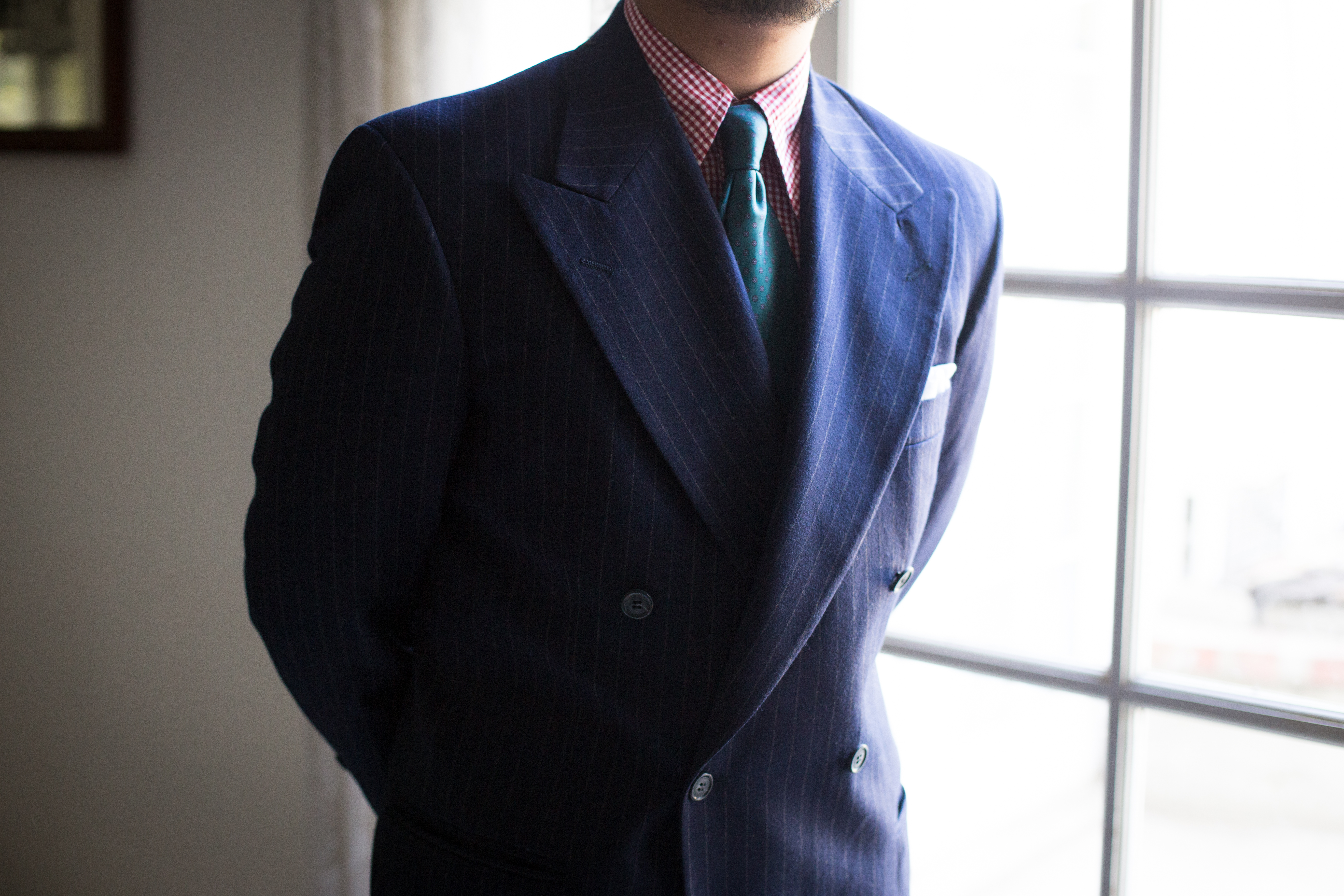 Talkin’ stying again!  As I’ve said before, people think that pinstripes are a super formal pattern; the same mindset is used for double breasted suits.  I like  to think of them as just normal garments, under the same rules as anything else.  That’s why I decided to mix patterns as I like to do (and as was done in the 1930s). The suit has a blue base, which already works well with other colors.  It was a bit of unintentional Christmas inspiration, but I went with a  red gingham shirt and  green foulard tie.  The red contrasts the blue while the green in the tie pairs with the blue in the suit; the foulard print also contains some red, which corresponds to the shirt.  If my example isn’t good enough, check out this 1930’s illustration which does my look almost exactly.

As was the case in the previous article, scaling your patterns is the key to pulling it off.  Thats why the bold pinstripes are offset by the vibrant microcheck of the gingham and the medium-spaced print of the foulard.  There’s nothing wrong with plain shirts and ties, but I just think that patterns are fun, since it reqires a bit more effort and playfulness to execute well! 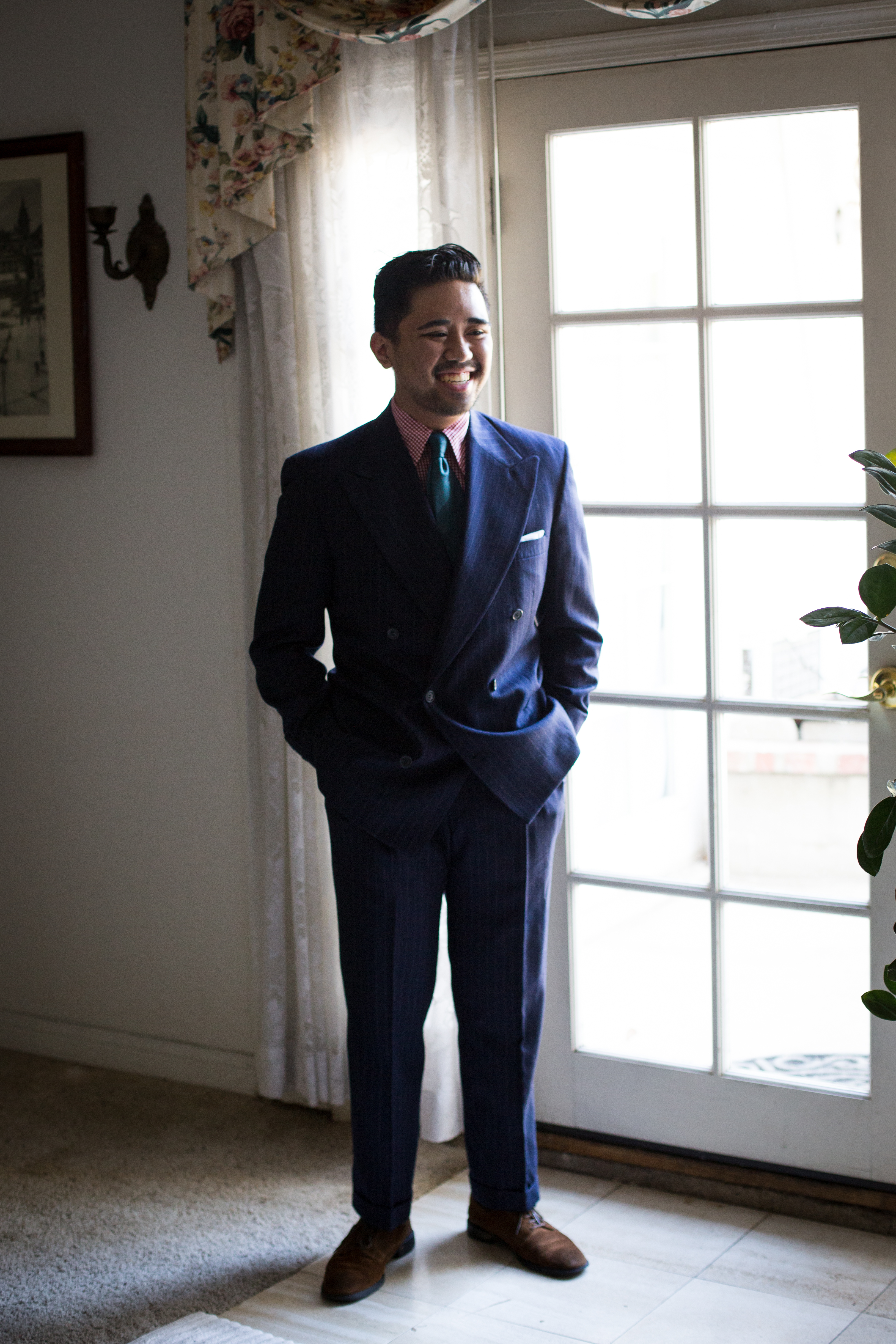 For a price ($150!!!) less than any H&M suit or even Combatant Gentleman (the latest cheap suit craze), I now have a fantastically tailored double breasted flannel suit!  I did have one before, but it was made of linen which isn’t always wearable as it wrinkles fairly easily.   Plus, this one has larger lapels and high rise pleated pants which are details which are closer to classic menswear then something super trendy.

While there are still some issues(lack of true waist suppression and large, padded shoulders), I think that Ruben did the best he could!  This article should show you that there are definitely diamonds to be found at Goodwill and other thrift stores.  It’s not always easy to find compared to eBay, but you at least get to try the garment on before you buy it!  You can better visualize how the tailoring is going to work and judge if it is worth the monetary investment to have the alterations done on the garment.  Additionally, some Goodwills and thrift stores have a return policy, so you can definitely go back if you decide not to have it tailored. I haven’t done that myself yet since almost all of my tailoring experiments have been a success!

So please go check out your thrift stores and local Goodwills for suits.  It will take multiple visits, but if you keep looking you will definitely find something great! All it needs is a bit of tailoring and you’ll end up with a great fitting suit like me! I don’t have a lot of money, but this is how I get over 80% of wardrobe.   Don’t spend money on glued, cheap suits at the mall; shop with vigilance on eBay or thrifting and use that money on tailoring.  You can thank me later.