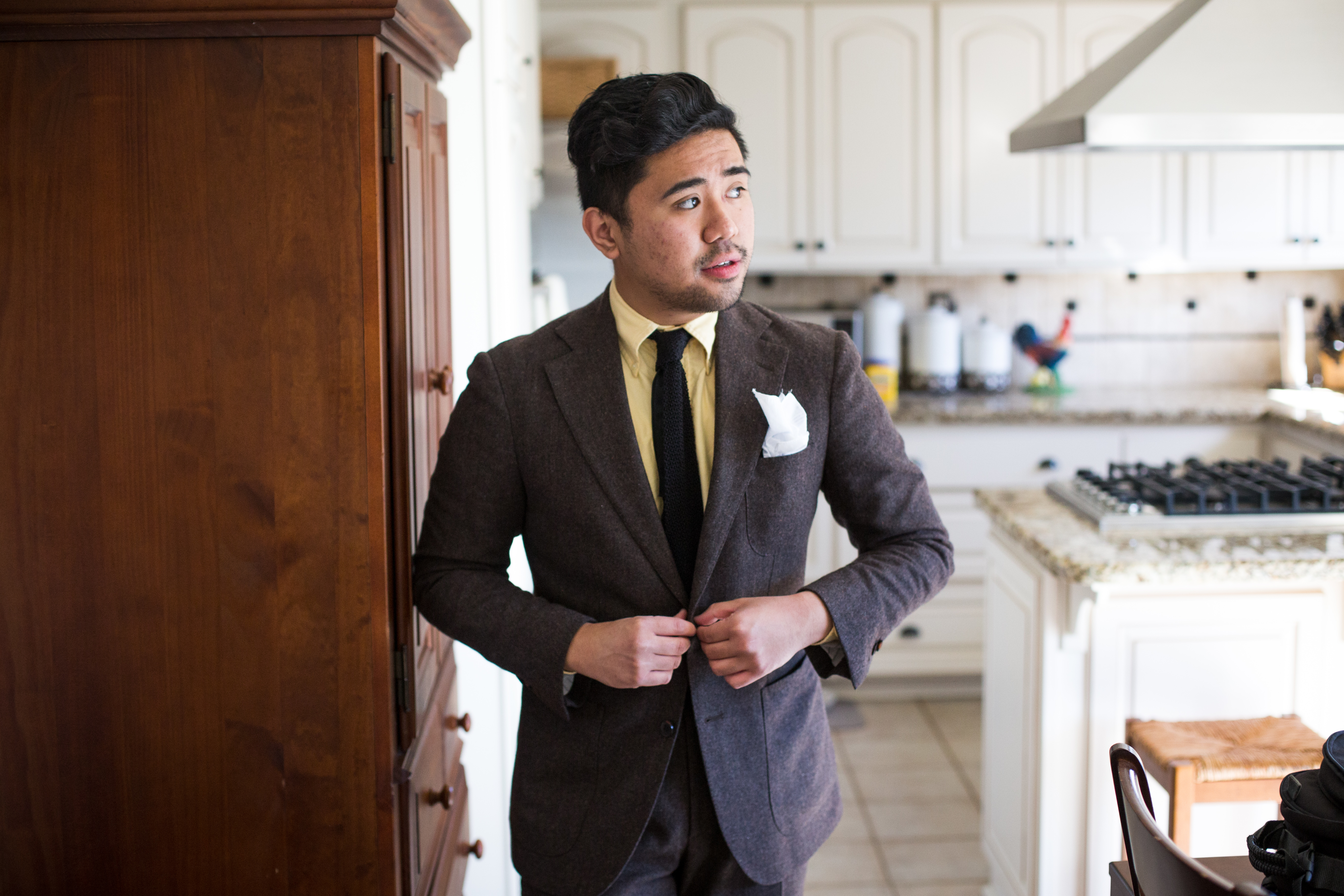 One of the cardinal rules of menswear is never to to mix black and brown, since the biggest mistake guys make is wearing a brown shoes with a black suit.  But is that always the case?

Yes. You don’t wear brown shoes and a black suit.

Black is inherently formal and a demanding color.   Anything worn with it instantly pops and not always in a good way. Red, blue, every color just jumps out.  To visualize it, just imagine what guys wear to prom or a wedding. The addition of brown shoes with a brown suit is also gross, for the same reason.  There’s just something that seems off about it.  Don’t get me wrong, you can wear brown shoes (boots more like) with black jeans, but not a full suit.  I even threw some shade at Ian doing this two years ago.  Shame, shame.

As a result, I’ve stepped away from brown and black.  Sure, I’ll wear my black shoes with a grey or blue suit, but never with brown! The stigma against the combination stuck with me until I saw this:

Jake's American grandfather that I just happened to find a photo of.

It’s a picture of Jake Grantham wearing a brown ivy jacket with a black knit tie.  I used to think that the same rules of skipping “black and brown” applied to neckwear as well as footwear.  Black neckties remind me of black bowties which are only worn with a tuxedo; as a result, I only wore my black knit tie with formal ensembles.  The combination with brown, like brown shoes on a black suit, seems like an odd mix of formal and casual. Like you went for a formal look but decided “meh, whatever” once you got to the shoes.

However, Jake’s look got me thinking: what if the opposite worked? What if you wore black shoes with a brown suit?   The idea didn’t seem that bad.  Usually black shoes are meant to make a suit or outfit much more formal.  Black loafers outrank brown ones.  Black wingtips beat out even brown captoes.  And black captoes rule all.   So in theory, perhaps black shoes could make a brown flannel suit (a sporting fabric) a bit more dressed up.

Additionally, the use of a black knit tie is much more versatile than a normal silk one.  Put This On has an article on that very subject.  I prefer them, since it adds just a bit of texture and playfulness to the normally formal tie.  I even styled Adam with it for our New Years post! 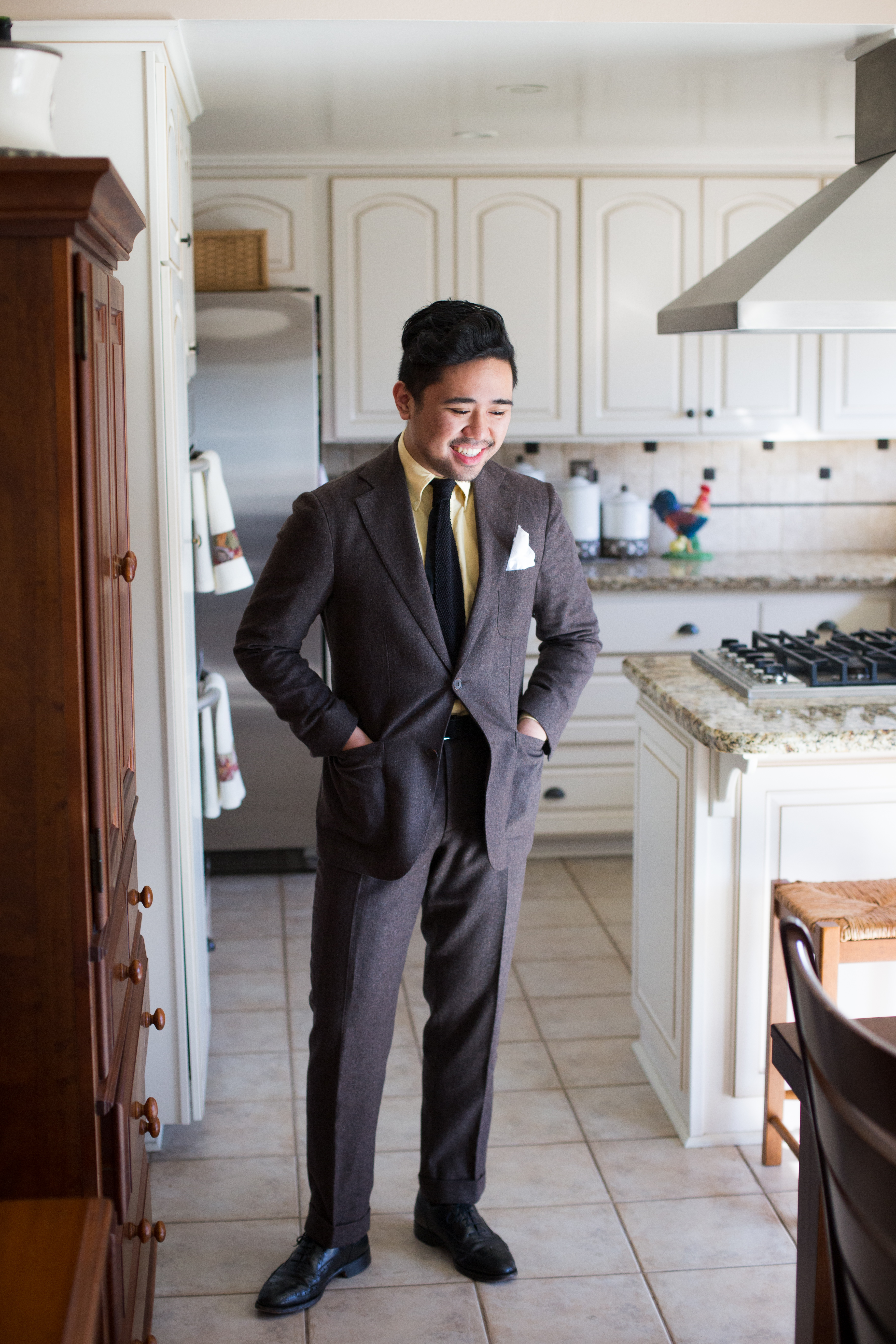 So here’s my take on combining black and brown in a way that’s more acceptable than the dreaded “black suit, brown shoes” combo.  In fact, I don’t even own a black suit as I think a tuxedo will work for all formal occasions where most guys say to wear a black suit; even if its a funeral, i’d wear a dark suit but not a black one.

Instead of a white OCBD like Jake, I decided to wear a yellowone (thrifted) just to add a bit more color into the outfit! It still works out fine, with the black shoes and tie actually anchoring the outfit down.  An overall simple outfit, compared to the pattern mixing that I usually prefer to do! 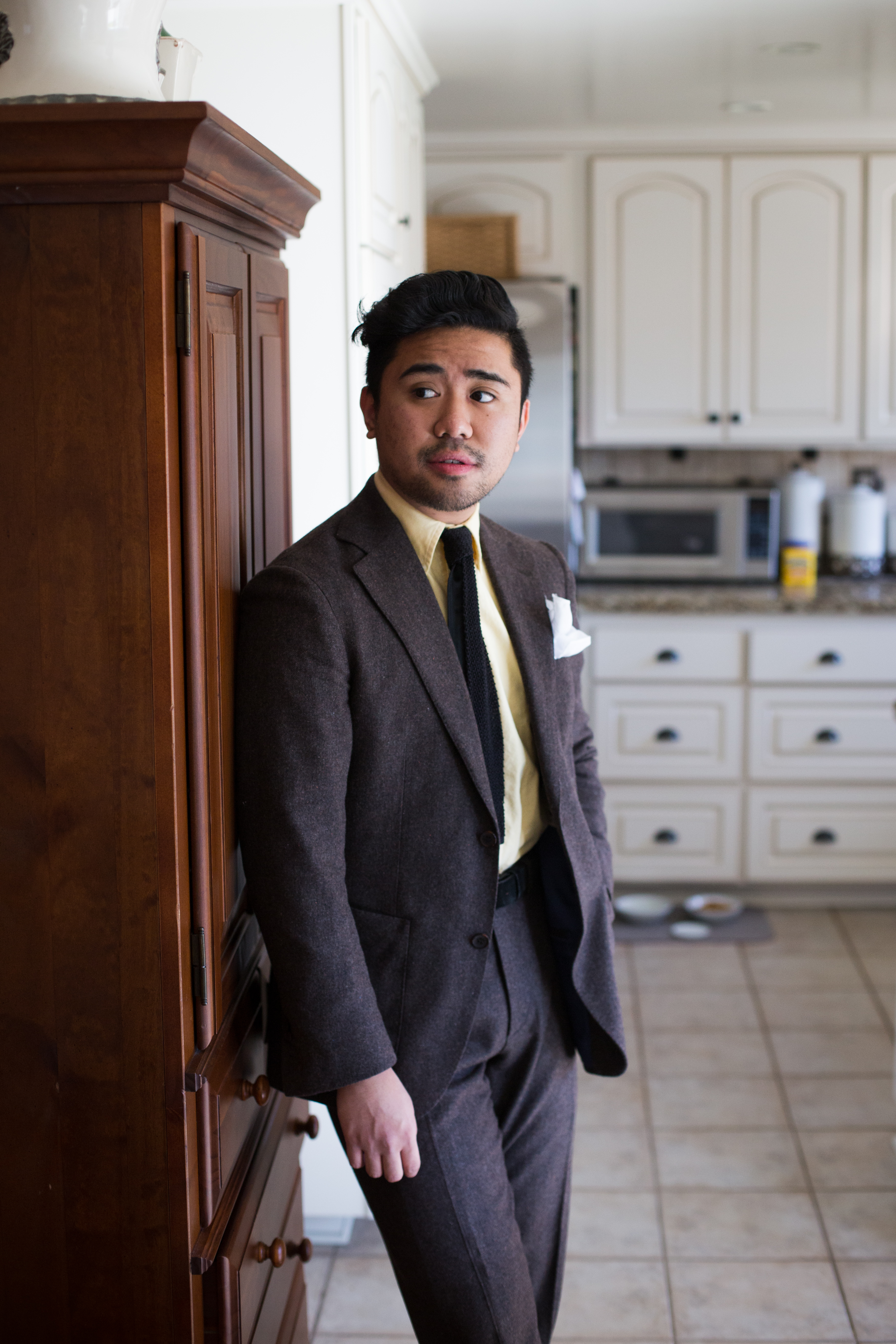 As you can see the black isn’t that big of a deal.  It works well within the outfit and gives it a clean, polished vibe.  Perhaps the key is that the brown surrounds the black, which makes it pair nicely.  In the previous cases, the brown shoes (and belt) are often in a bright, cognac color which jumps out as a sartorial eyesore when worn with black. 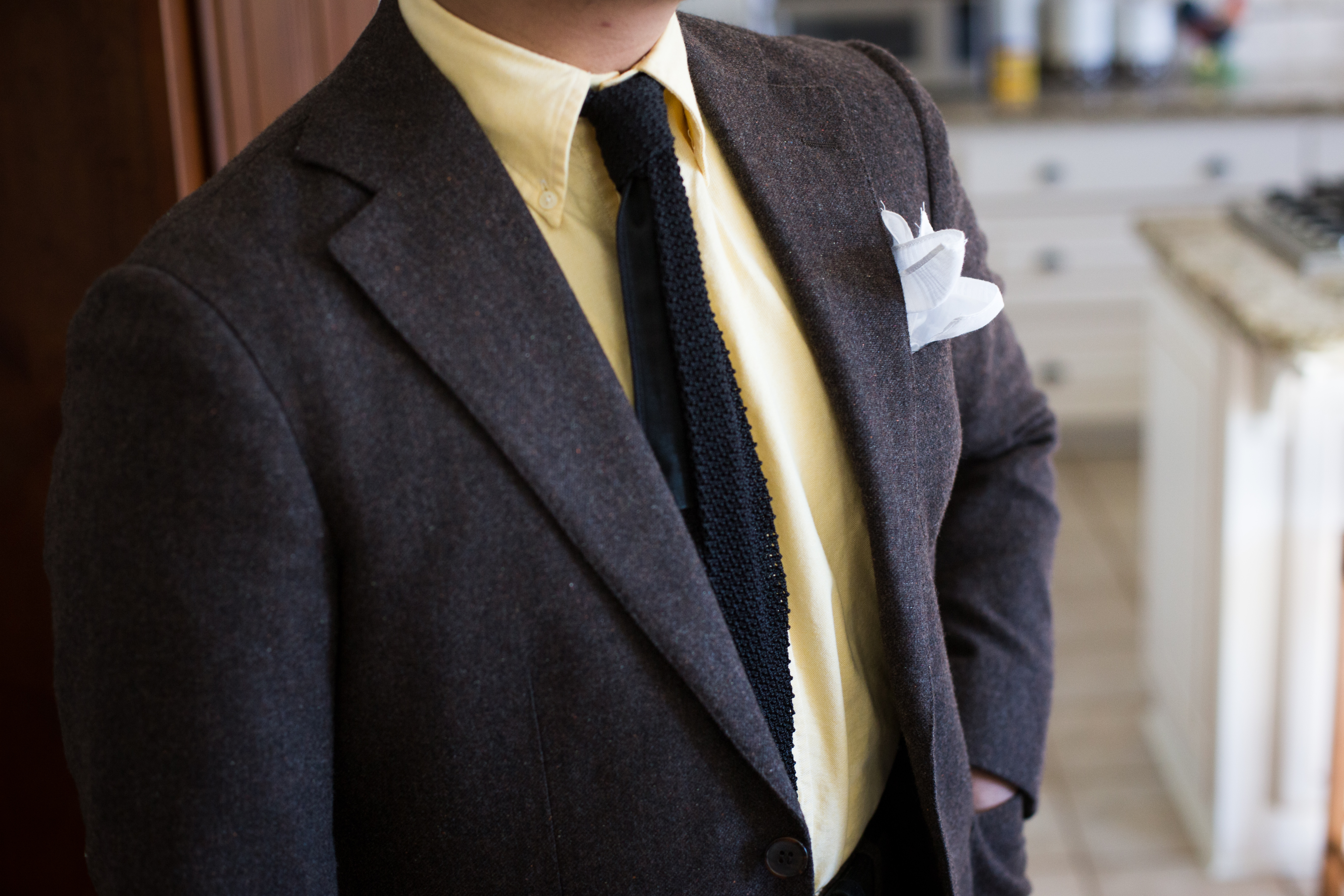 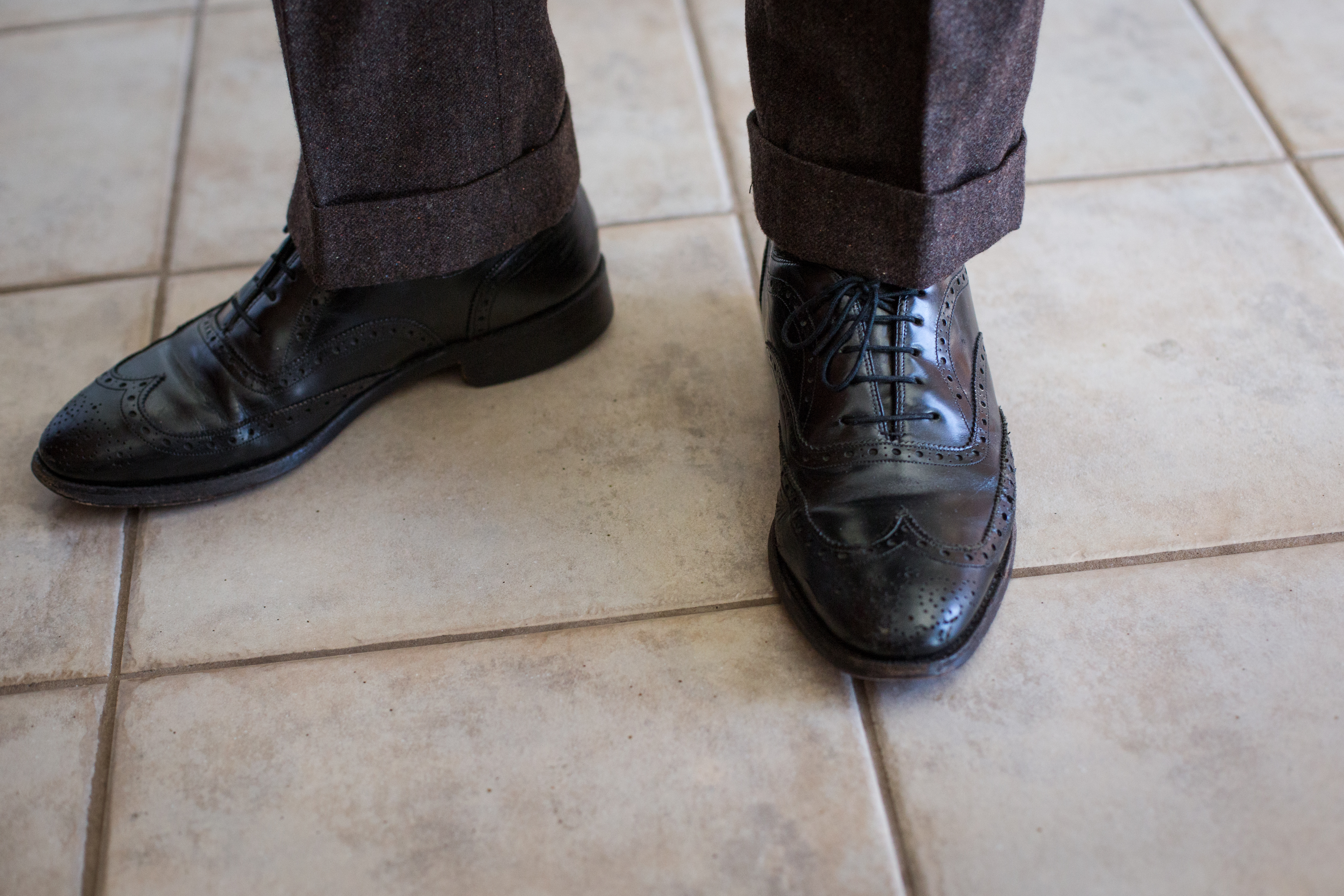 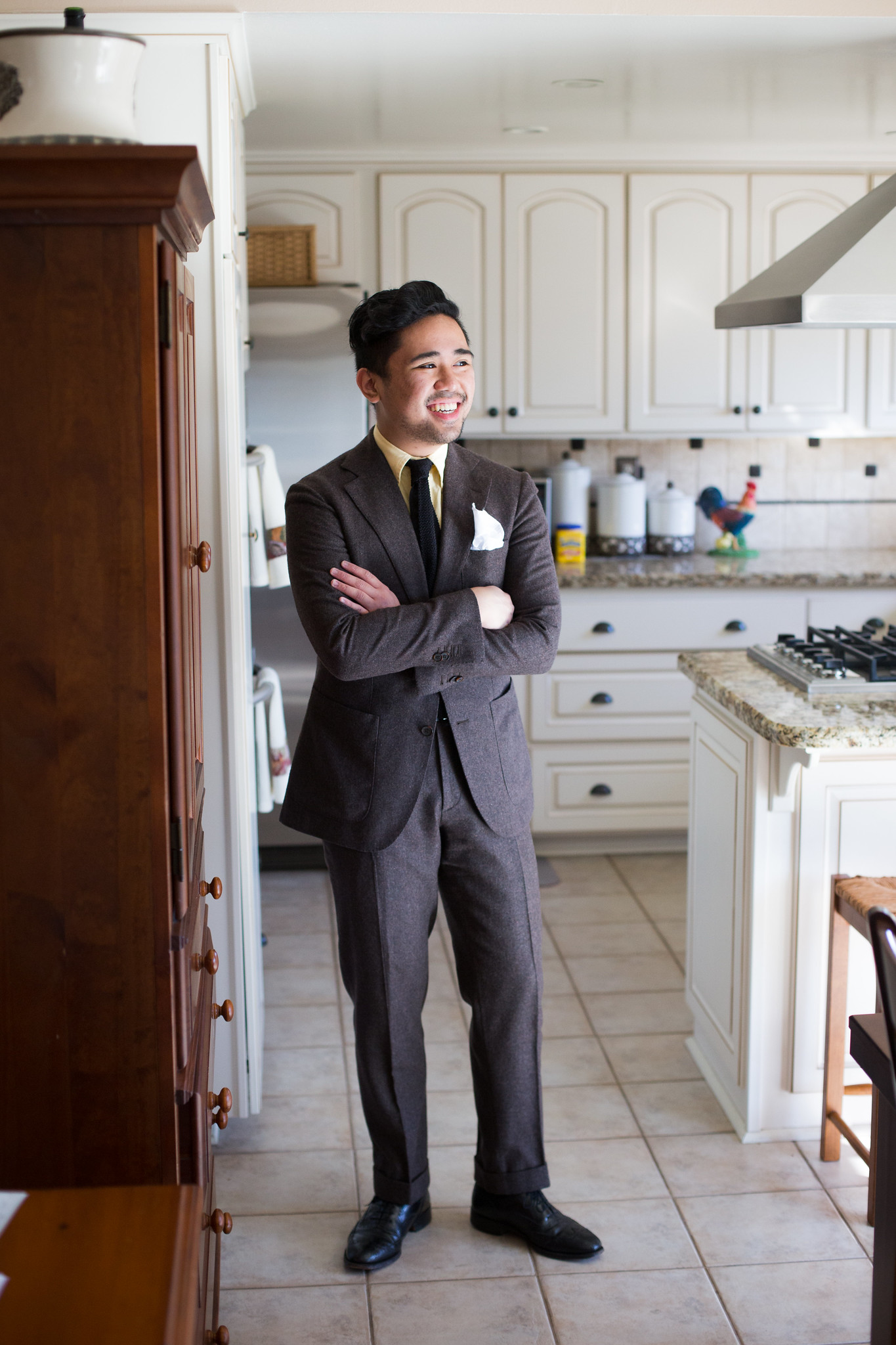 So as you can see, the rule of never combining brown and black doesn’t always apply.  I will never recommend wearing a brown shoes with a black suit, but you can definitely wear black shoes with a brown suit! Why? It’s all due to the amount of “pop”.

The reason why my way works is because the black acts as a grounding point for the outfit, as most shoes do.  Here, the black grounds the soft and casual suit into something more “formal”; the black tie also helps hone that in.  Sure, brown wingtips could also work, but I thought that the black wingtip was a much more interesting choice!  The reverse (black suit, brown shoes) doesn’t work because the shoes become the focal point of the outfit instead of the grounding device.  My black wingtips don’t “pop”; they just anchor the outfit.

I hope you enjoyed this brief article! Just know that you can definitely wear brown and black, whether its with jeans or with a suit! Just make sure that you never wear brown shoes with a black suit.  The opposite is perfectly fine!