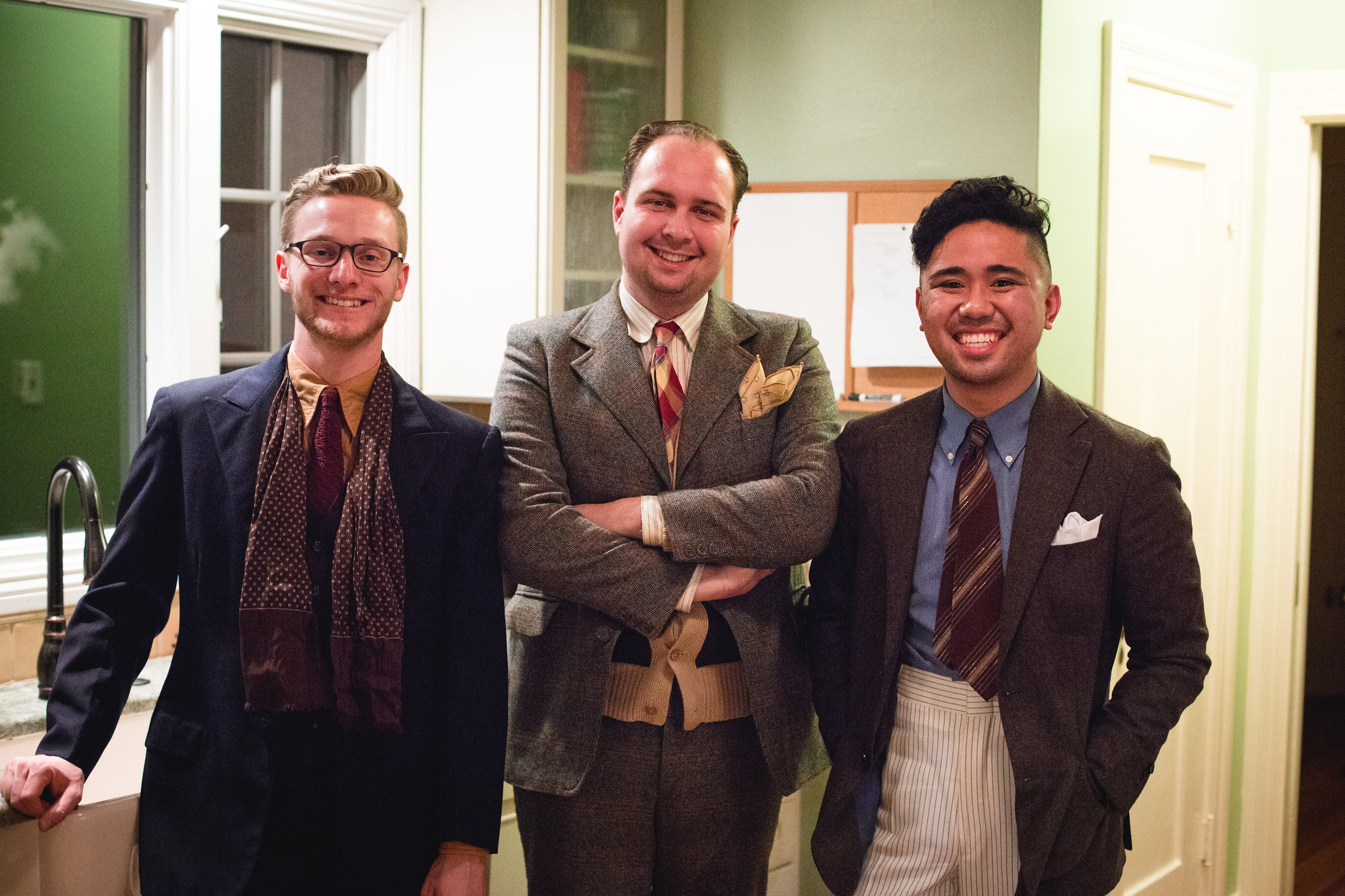 Friendgiving is a great tradition.  While I did enjoy Thanksgiving with my family, I also appreciate the time to hang out and have dinner with just friends.  Like with any event, it was an opportunity for Spencer, Jay, and I to break out some cool fall sartorial style for the dinner!  Unlike last time, none of us wore tweed; however we still brought our A-game. 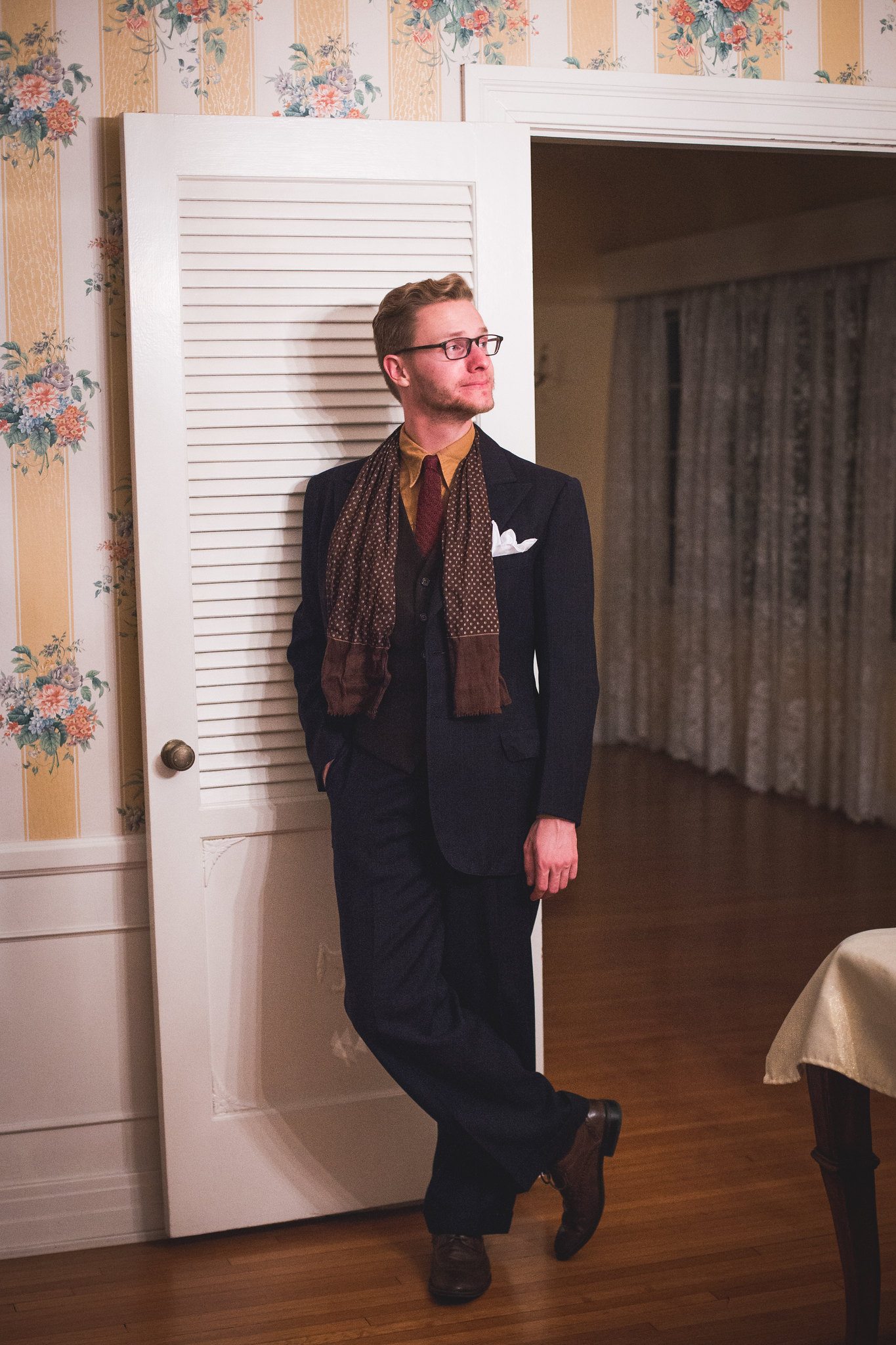 Last year, Jay went with a herringbone tweed suit with a blue shirt and herringbone wool tie.  This year, he ups the formality with a kick-ass peak lapeled pinstripe suit from 1940’s. Just look at those sharp and accentuated shoulders. Even though the suit is “formal” by #menswear standards, he puts a fall spin on it with an orange spearpoint shirt and burgundy knit tie; he even adds a brown waistcoat to break up the suit. Unconventional by sartorial purists, but perfectly fine for me!  After all, putting a new spin (whether its vintage or eclectic) on suiting is what this blog is all about! 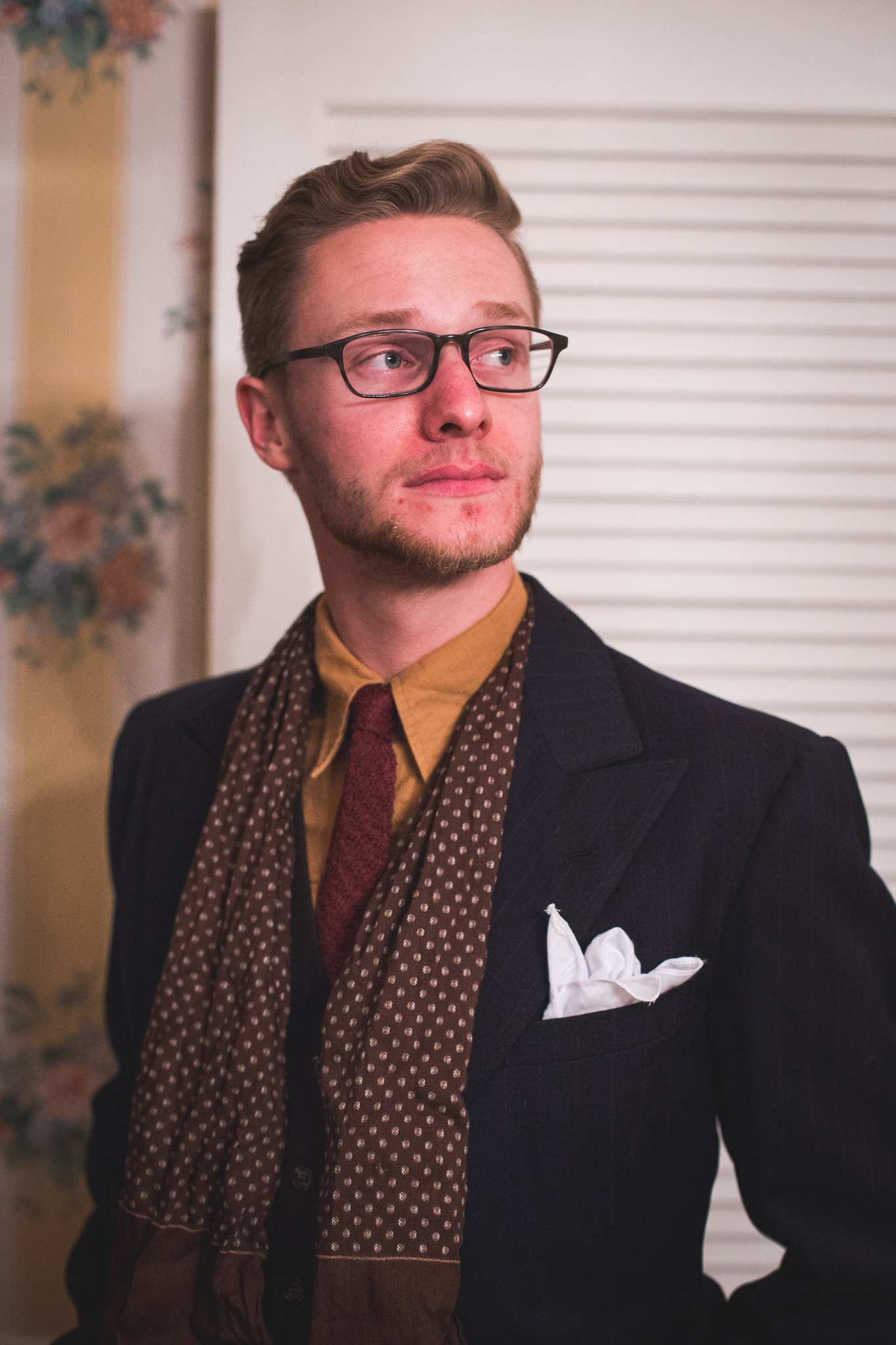 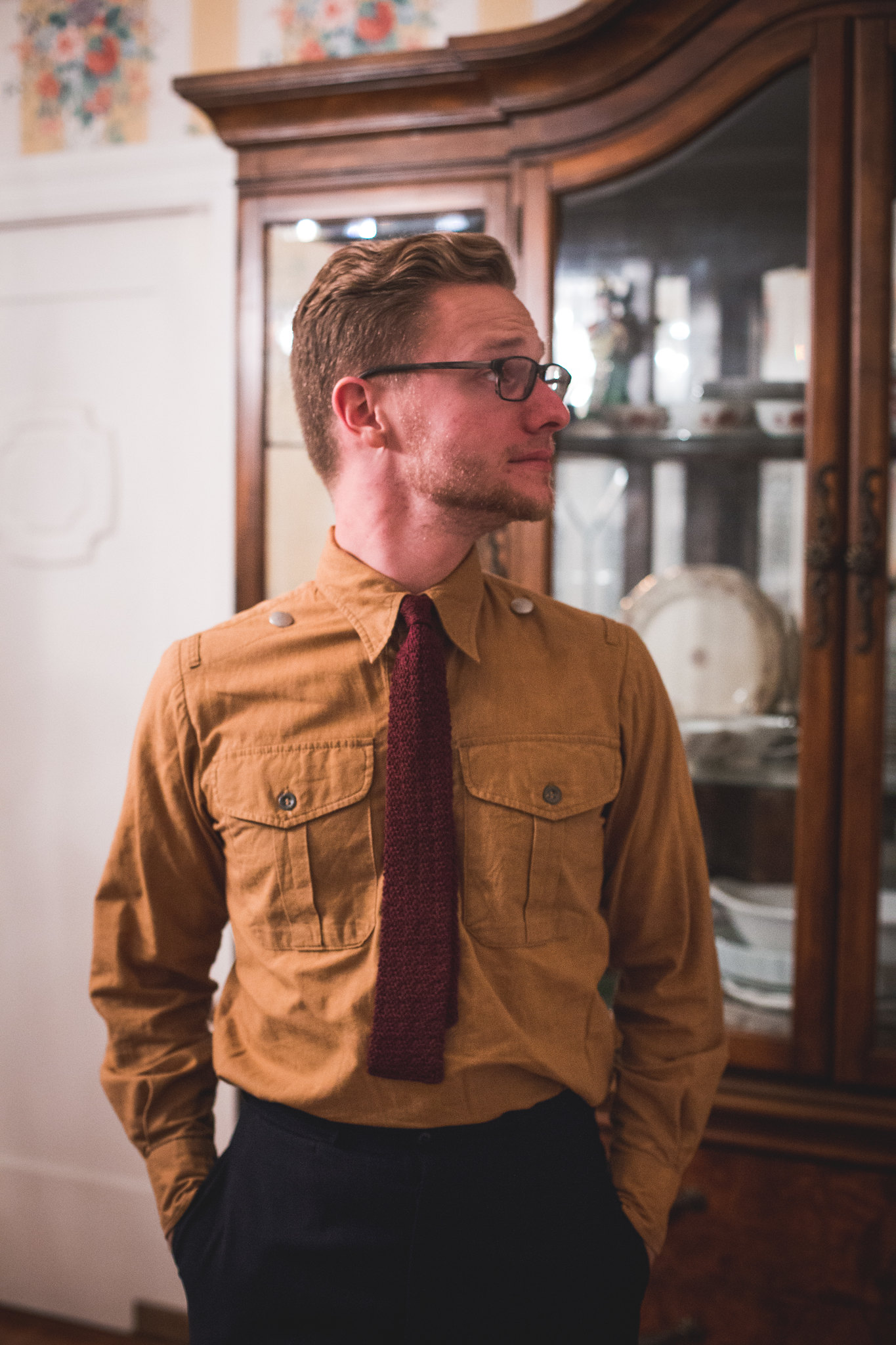 Now I’ve worn custom shirts before. In fact, almost all of the spearpoints that you see on this blog are made by Natty Shirts! Jay hasn’t tried them yet, but he got a tailor in China to reproduce this 1940’s army shirt for him.  You might think that it’s too “GQ” to wear a tie and a shirt with front pockets but people did it back then! Gents in the 1930s-1940s wore ties with anything, even polos.  Go figure. 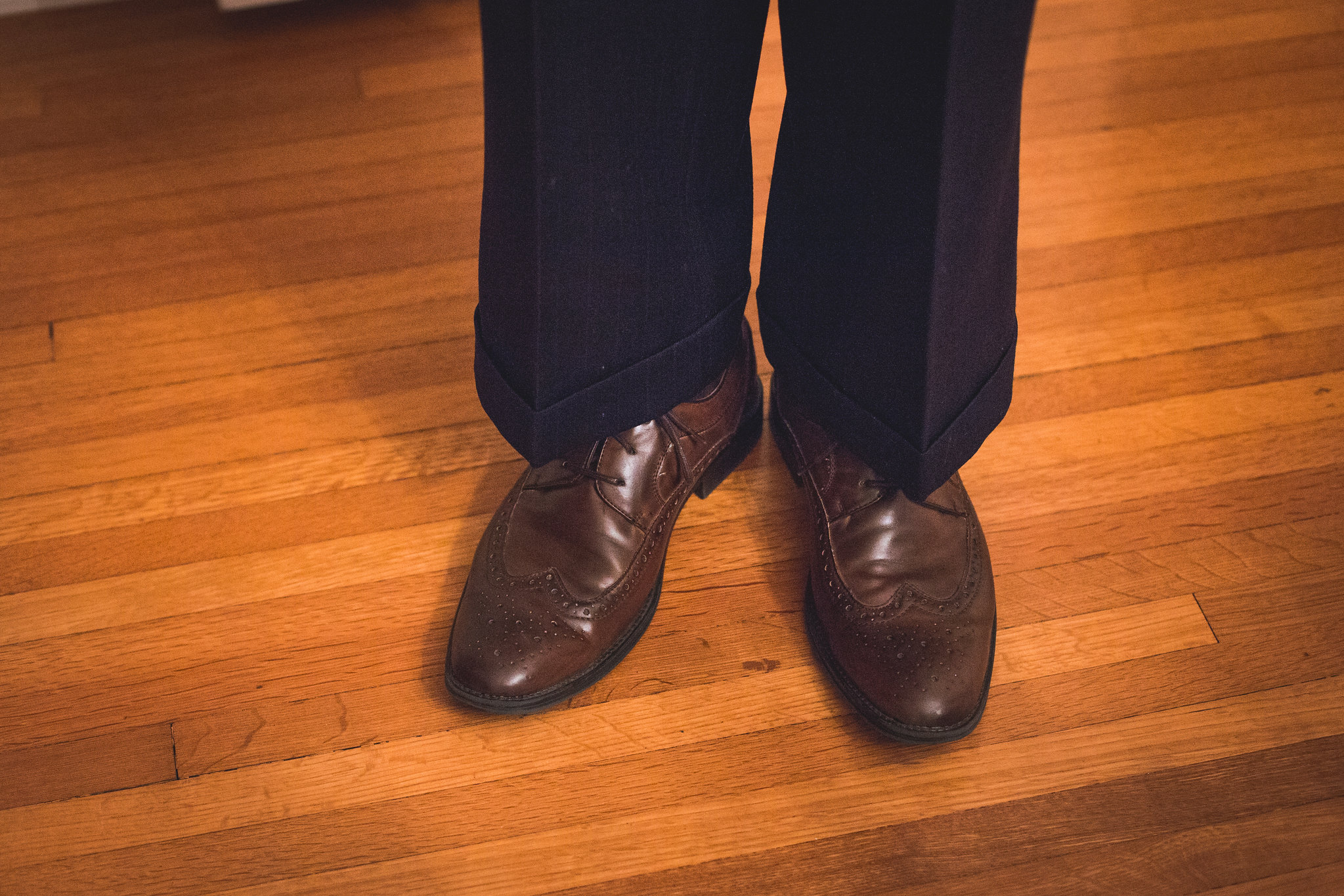 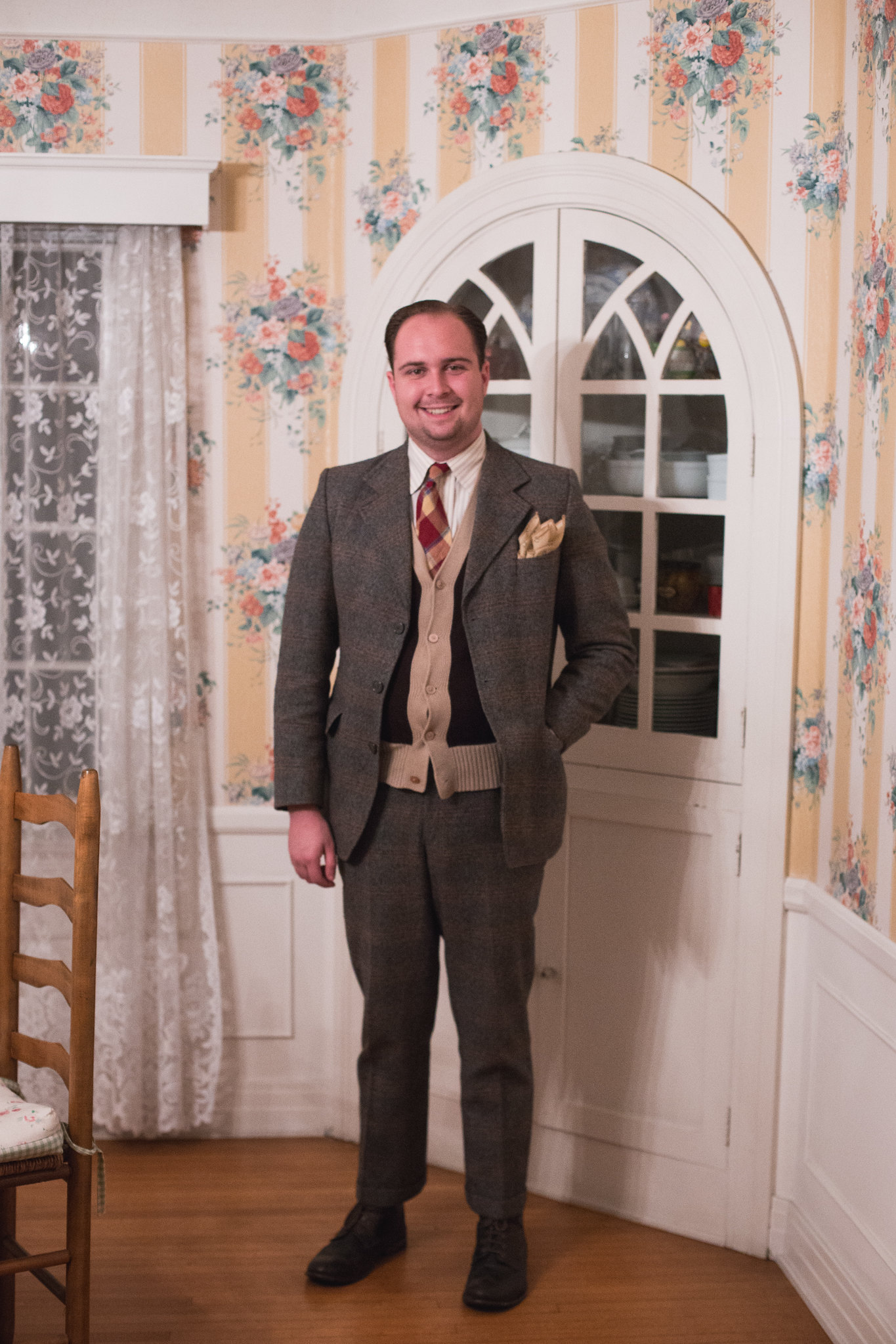 Spencer is usually a man who wears true vintage. Last year he wore 1940’s pants with a 1940’s jacket.  While he prefers “golden era” vintage, that doesn’t stop him from buying something cool when he sees it! This past summer he spent a month in London, and while he was there he saw this epic vintage Gieves and Hawkes suit (a preeminient Saville Row tailor) from the 1970’s. It lacks the huge pocket flaps and exaggerated lapels so it works perfectly with his classic wardrobe! The fabric is just gorgeous; grey with a subtle red plaid! 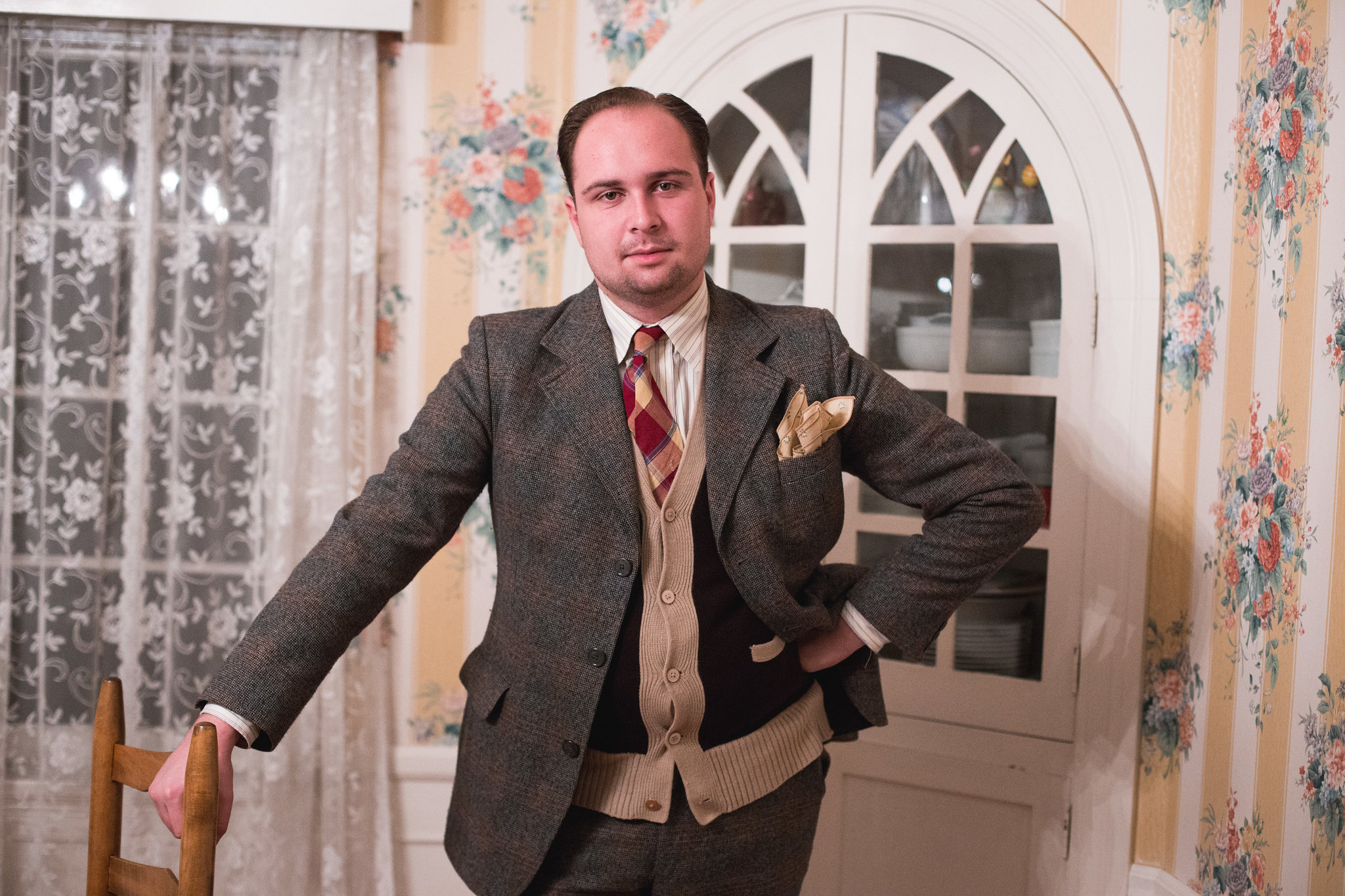 True classic style is all about pattern mixing and Spencer does it daily.  Most guys are afraid to pattern mix, but that’s usually because they don’t know how to do it.  My advice is to pay attention to scale and subtlety.  While his suit is plaid, its not jumping out of the fabric.  This allows Spencer to play with patterns, like wearing a striped shirt and a bold plaid tie.  Note that the scalign is all different, with the plaid in the tie being the “biggest”, offset by the medium scale of the shirt. He also decides to wear a two-toned cardigan, which he grounds by wearing a similar color in his pocket square. 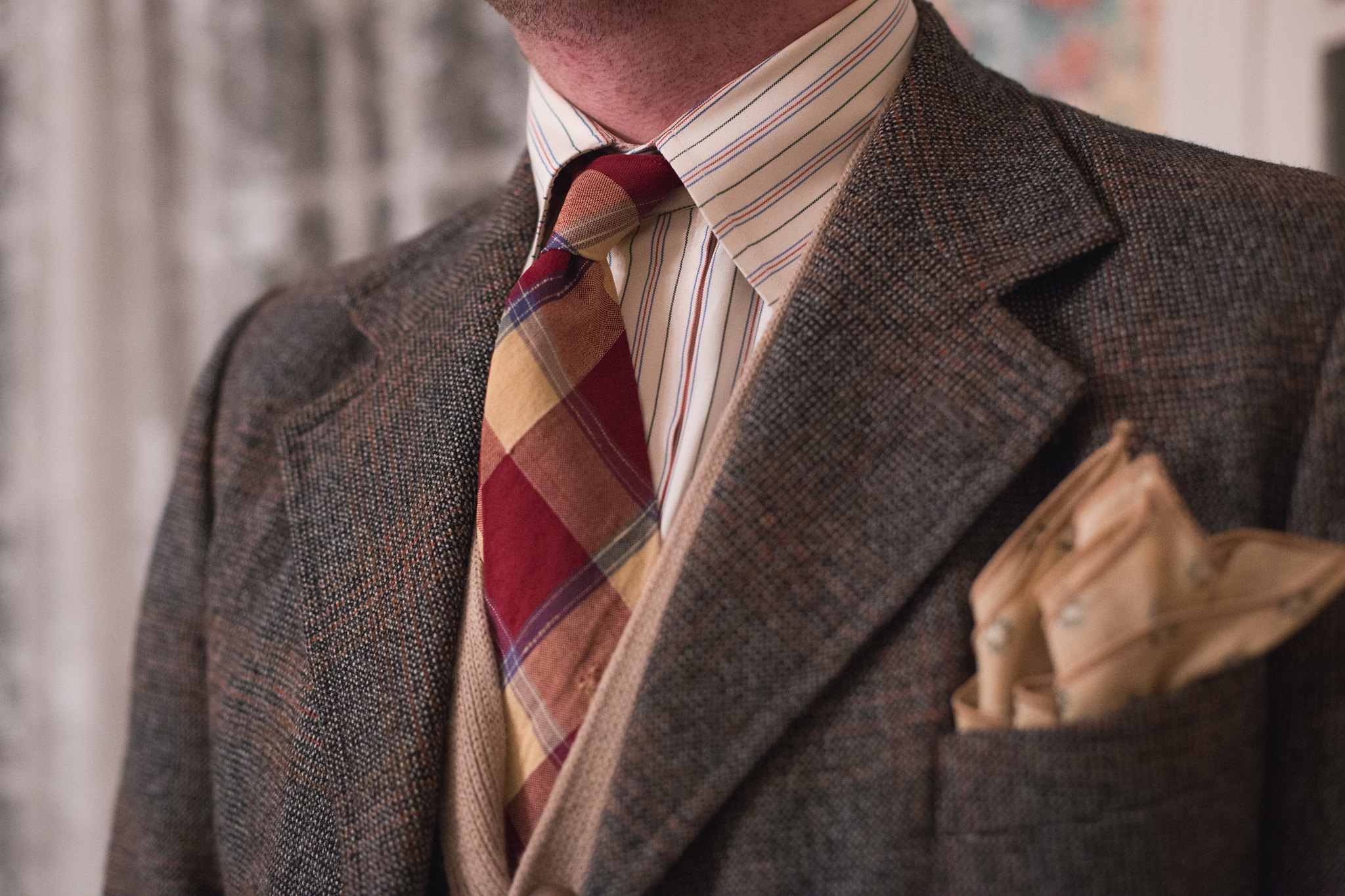 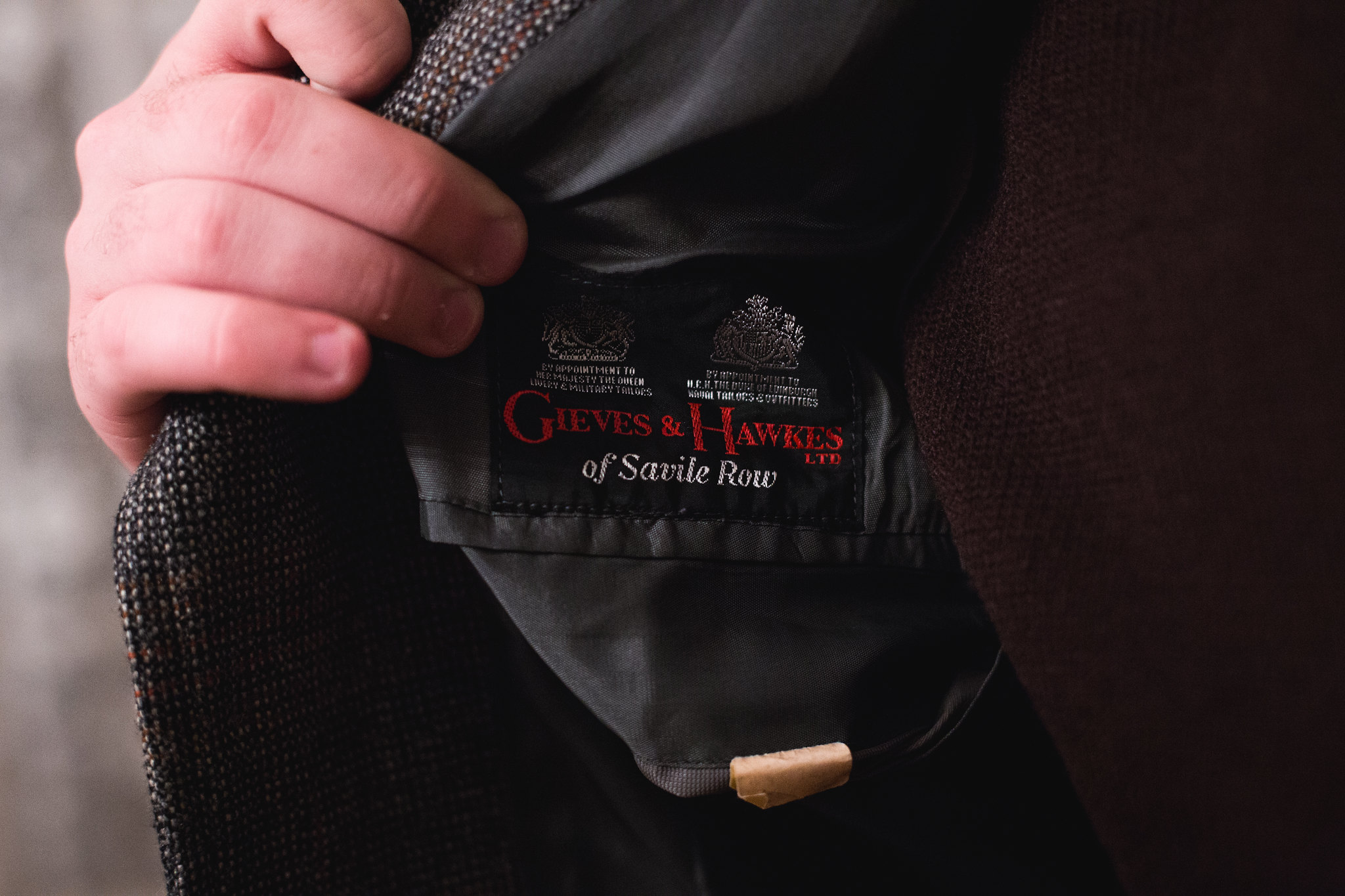 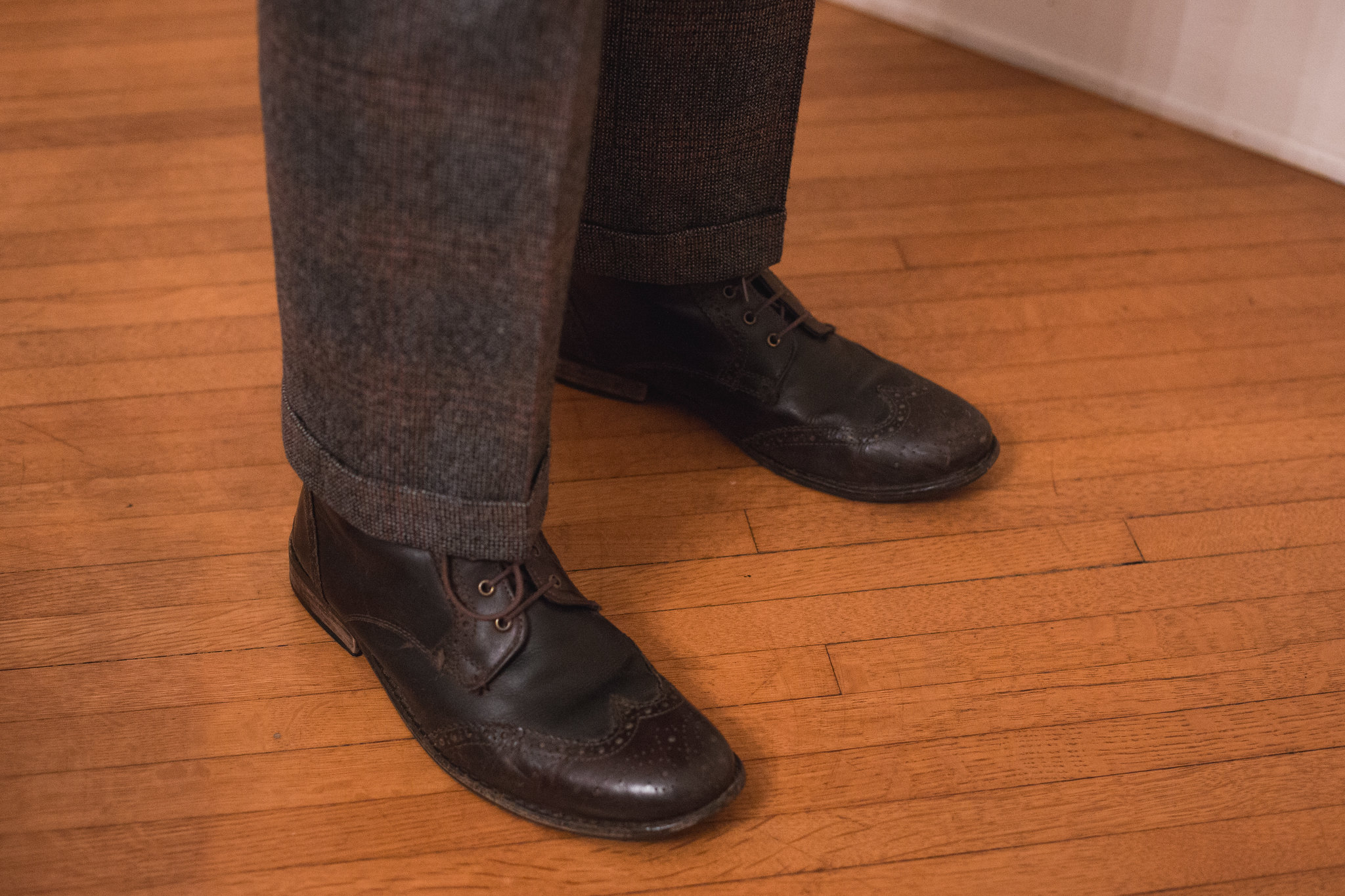 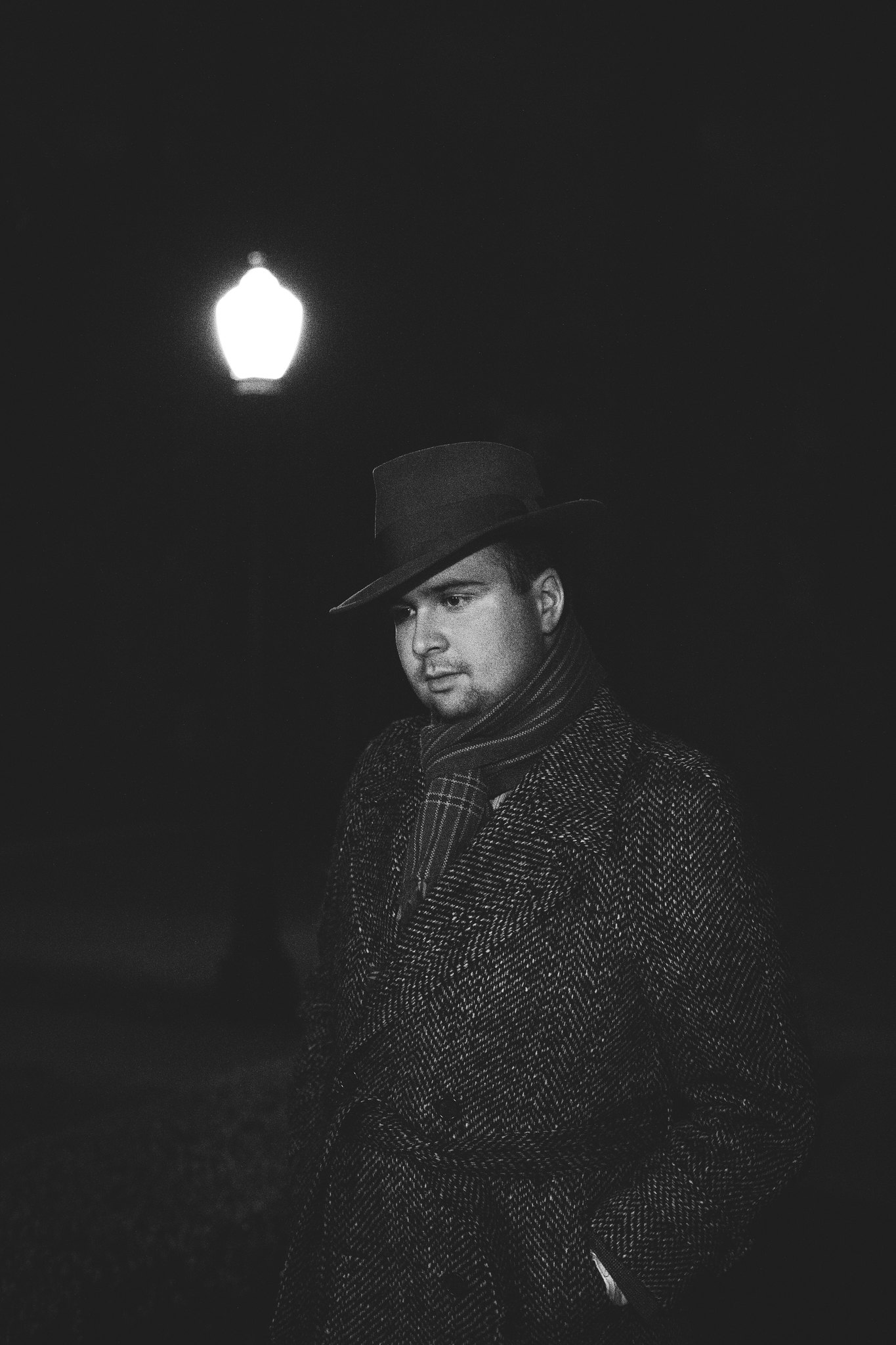 Spencer’s outfit for a walk in the neighborhood after dinner, featuring a 1970’s herringbone belted overcoat. 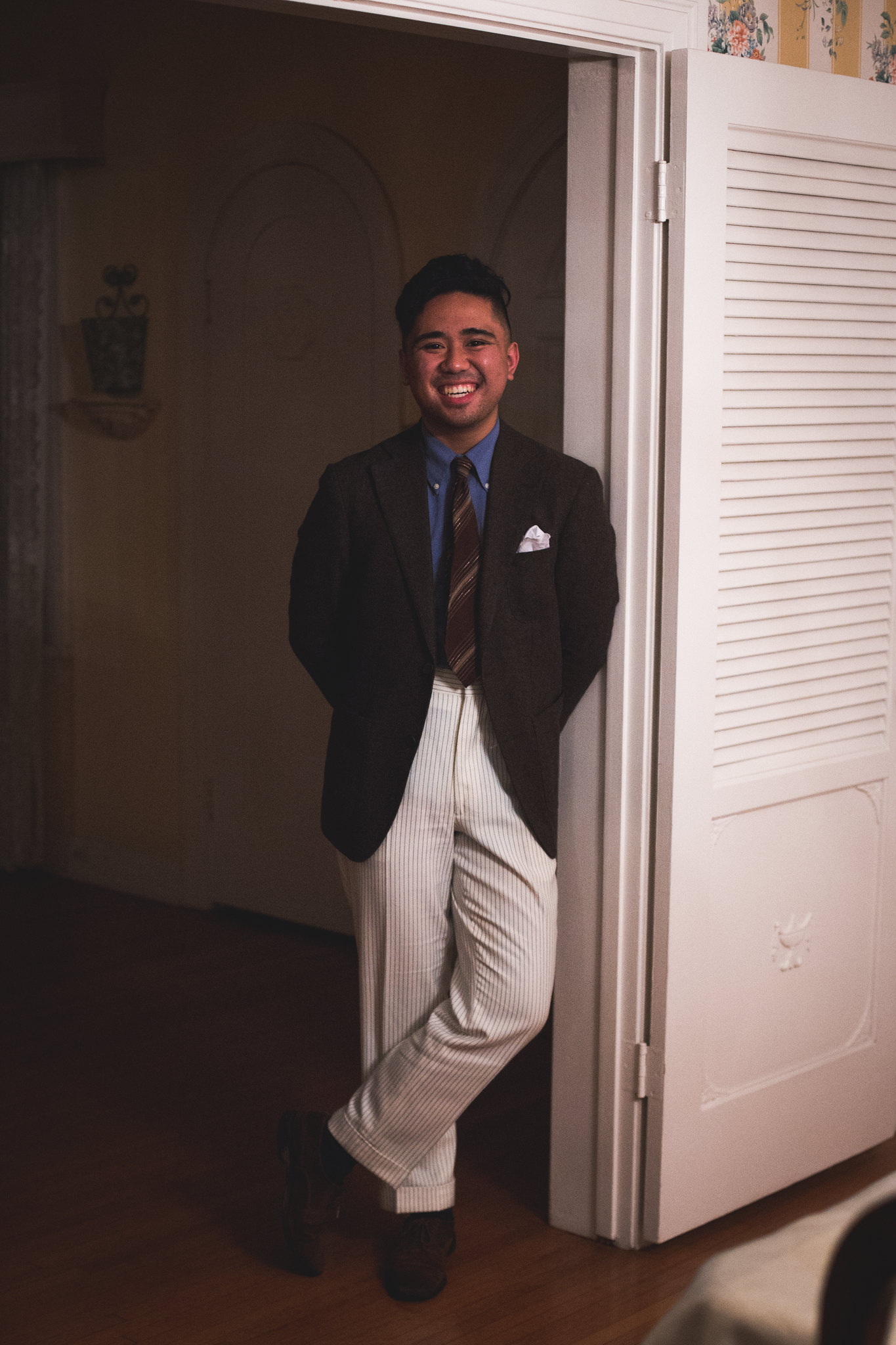 My outfit is a bit incongruous with the others because it almost looks like something you’d see at the Spring-Summer Pitti Uomo in Florence. However, its the fabrics that make this outfit decidedly fall appropriate.  I did get inspiration from a 1930’s summer picture but I decided to put my own spin on it.  I wear a flannel brown jacket (with triple patch pockets) with a blue OCBD, textured 1930’s tie, and striped cream flannel trousers. At first glance you might have thought that these pants were linen (as most would be) but they’re flannel and 100% comfortable.  It felt like I was wearing pajamas! 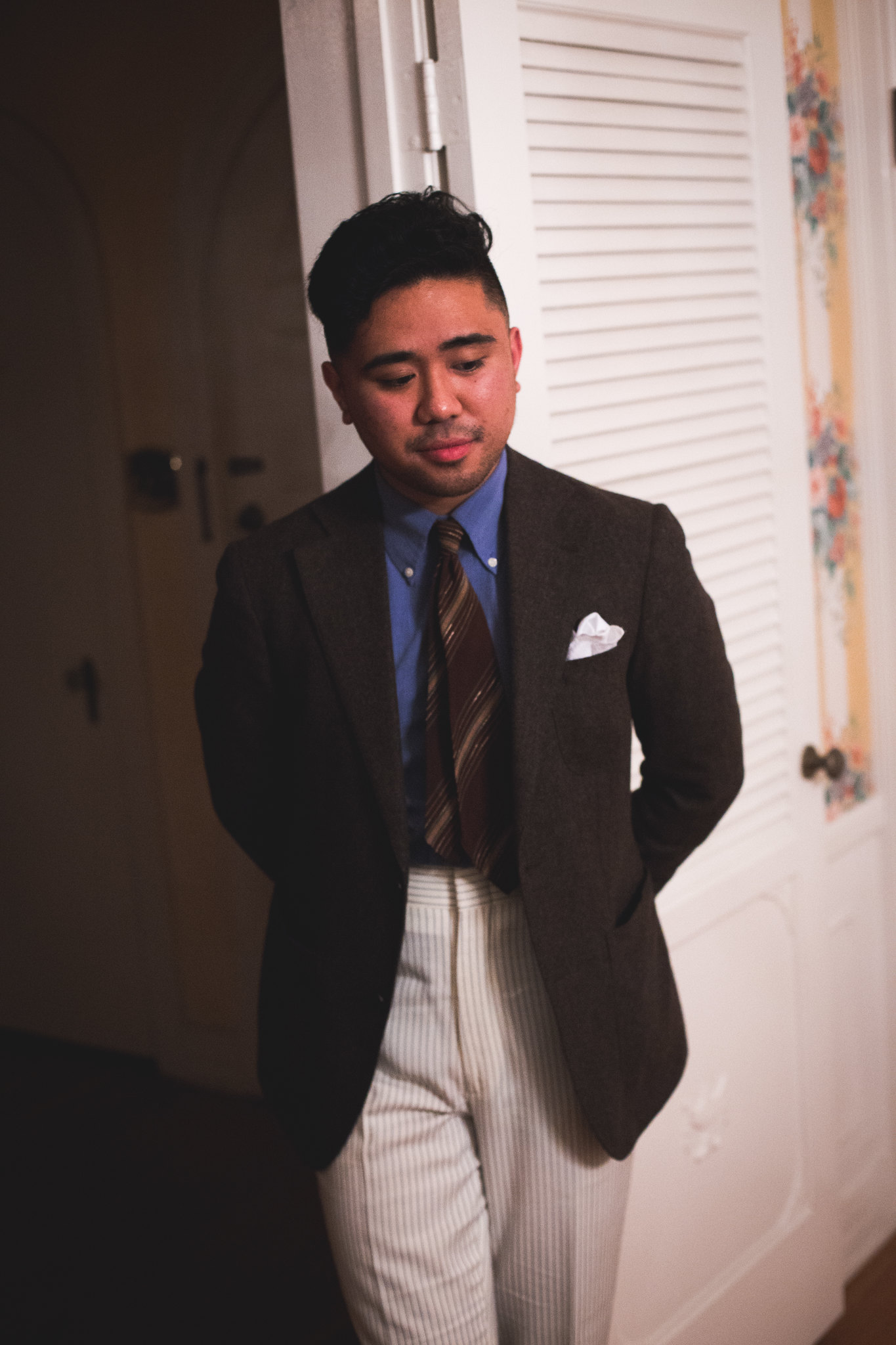 The jacket (like the trousers) is completely unstructured and is also completely comfortable.  The raised sleeveheads give it a bit of pseudo-formality, calling to mind the house style of Sciamat, but it really doesn’t mean anything. The natural shoulder gives the jacket a sense of ease, making it my favorite garment to wear! It goes with everything, from cream flannels, to grey chinos, to jeans! 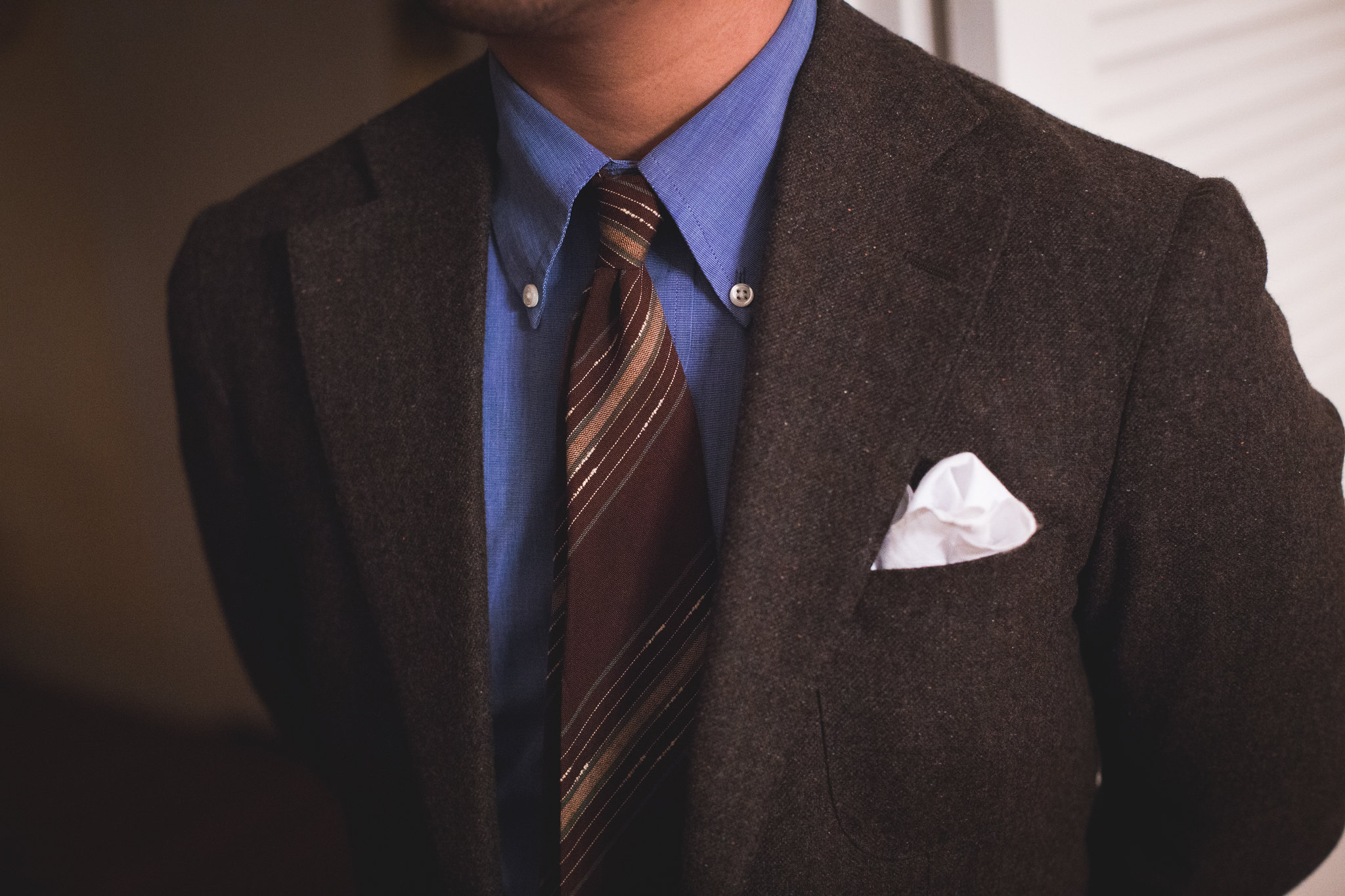 No stripes on stripes this time! 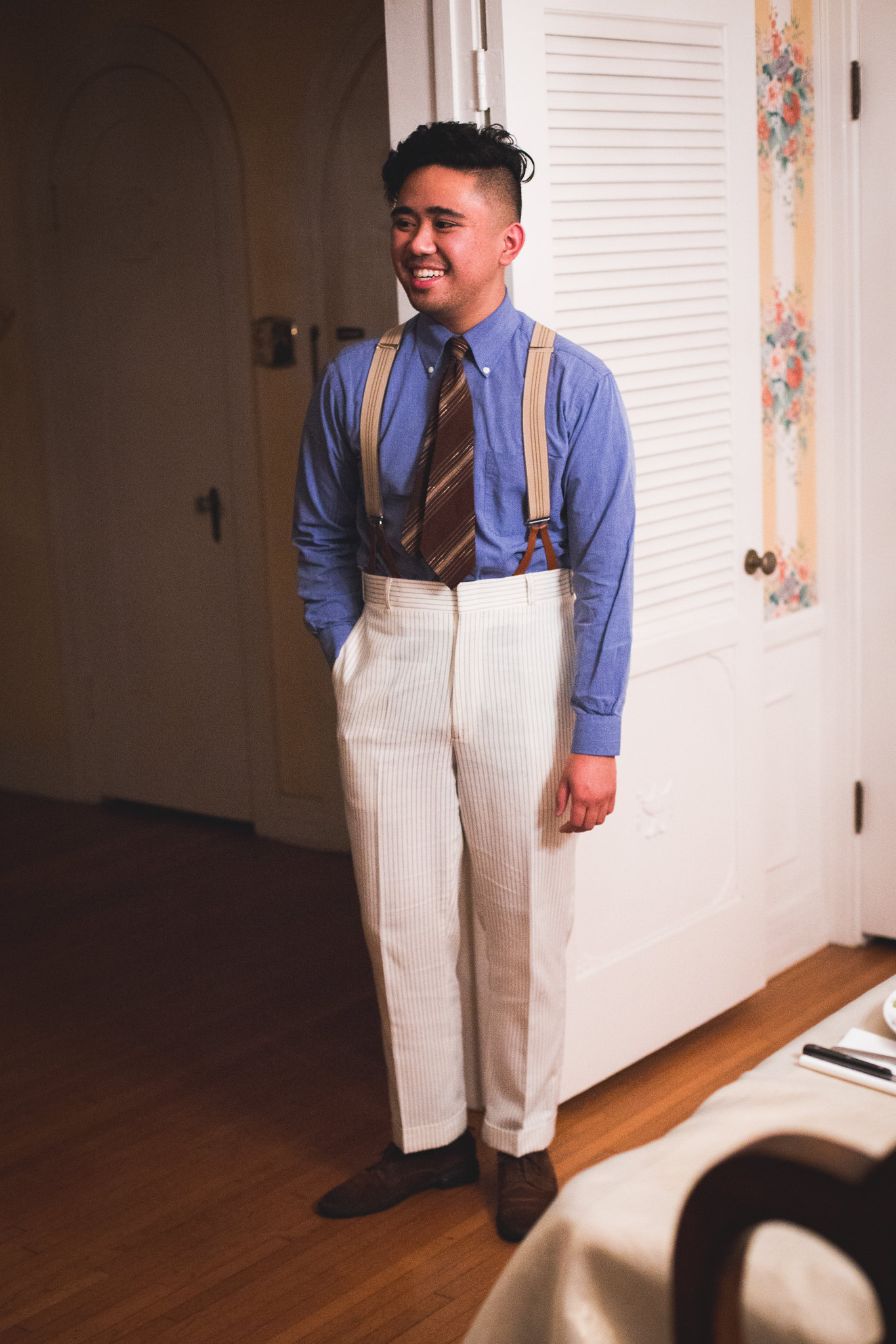 Here’s more living proof that high-rise is amazing.  They make my legs look longer and slimmer! Also note that the pants are hemmed to the correct length; no billowing or breaking here. Note that these pants are from the 1960’s, which is still pretty available in most thrift stores. If you want to go high-rise, you don’t have to buy “golden era” vintage; just look around!  I’ll probably be writing a post on the topic in the future.  Or a video?  Let me know by commenting below!

I hope that you enjoyed this latest edition of what wore on Friendsgiving! Last year was great, but I really think we stepped up our game this year! I gotta say that these guys are some of my best friends and I’m glad that style brought us together.

So whose outfit was the best? What did you think of the 1940’s Suit? Did you like the cream trousers in fall?  Let me know by commenting below!

I hope you all had a blessed Thanksgiving weekend! 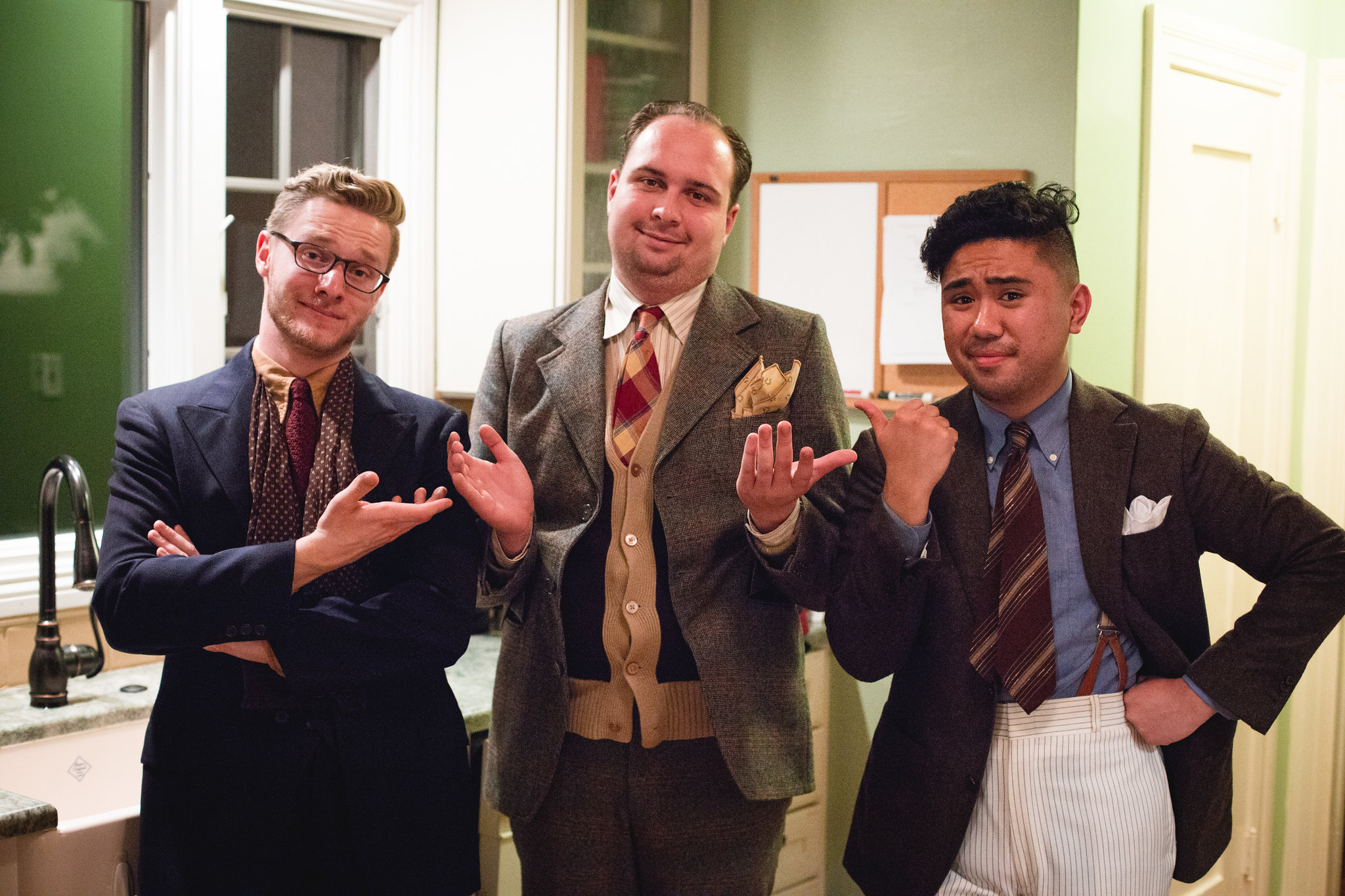