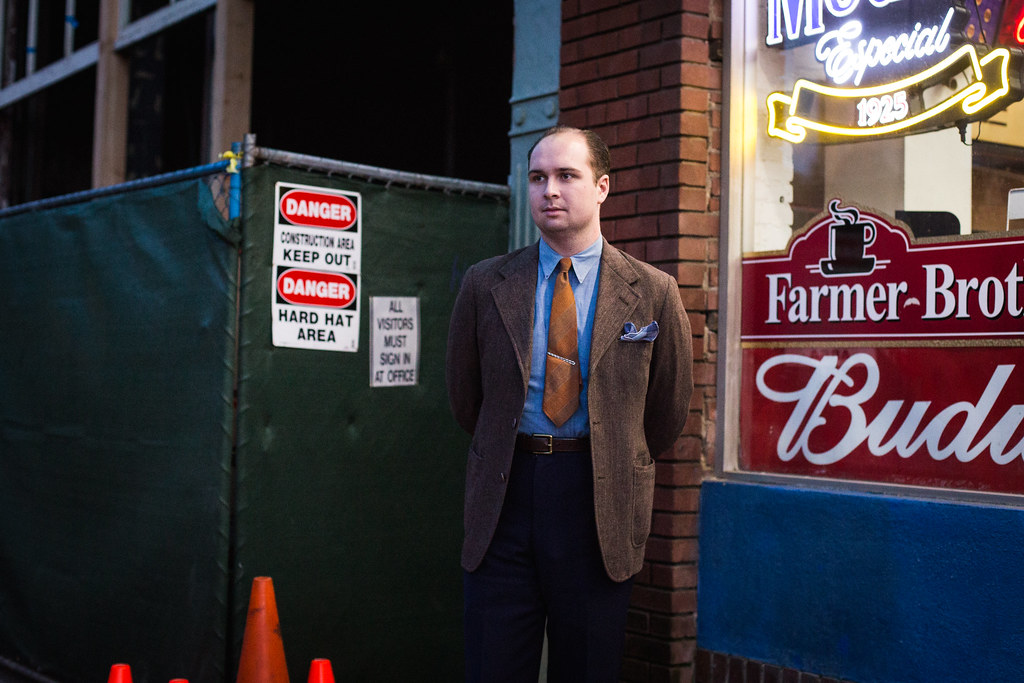 I love grey trousers. They’re extremely versatile and go with everything, whether you’re going vintage casual or when you want to wear them with separates like a sweater vest or a patch pocket sportcoat.  Now, navy trousers are the counterpart to grey as the pair of trousers everyone should own.  Normally I recommend grey since its very plain/unsaturated, allowing you to ground an otherwise loud or colorful outfit.  But when it comes to wearing navy trousers, I almost always pair it with brown; the harmony between these two earth tones is nothing short of amazing that really gives you an old school look.  Brown and blue are my favorite colors and it’s what we wore this week on Street x Sprezza!

I honestly think it sad that this combination isn’t really en vogue in #menswear, especially since its such a great combination!  It’s usually overshadowed by the tried and true blue jacket, grey trouser combo which is more traditional and safe.  Blue trousers are certainly cool, but they’re most often paired with a grey jacket.  In a short conversation I had with a fellow “sartorial enthusiast” (suit lover, I should say), we both agreed that brown is an old school color that is seldom worn; it might be a self fulfilling prophecy in that sense.  I mean even with a modern fit, my $3 brown chalkstripe suit looks pretty “vintage”.  It’s probably associated with “country” or “hipster look”, due to the old adage of “no brown in town”.

I maintain that brown is an excellent color that definitely has its place in menswear.  It pairs perfectly with blue trousers (rather than grey) since it does give off earth tones.  Due to this fact, it’s still an easy combo that allows you to have fun within other facets of your outfit.  Wearing this combo definitely stands out among the more “corporate attire” and instead places you as a person who enjoys suits and sportcoats!  Here’s some great combinations that the guys and I came up with to hammer in these points.  Note how none of these outfits are formal business wear.  It’s something slightly more casual, thanks to the color scheme and accessory choice, as well as something that has a bit more mastery over coordination.  That’s the way Street x Sprezza does it. 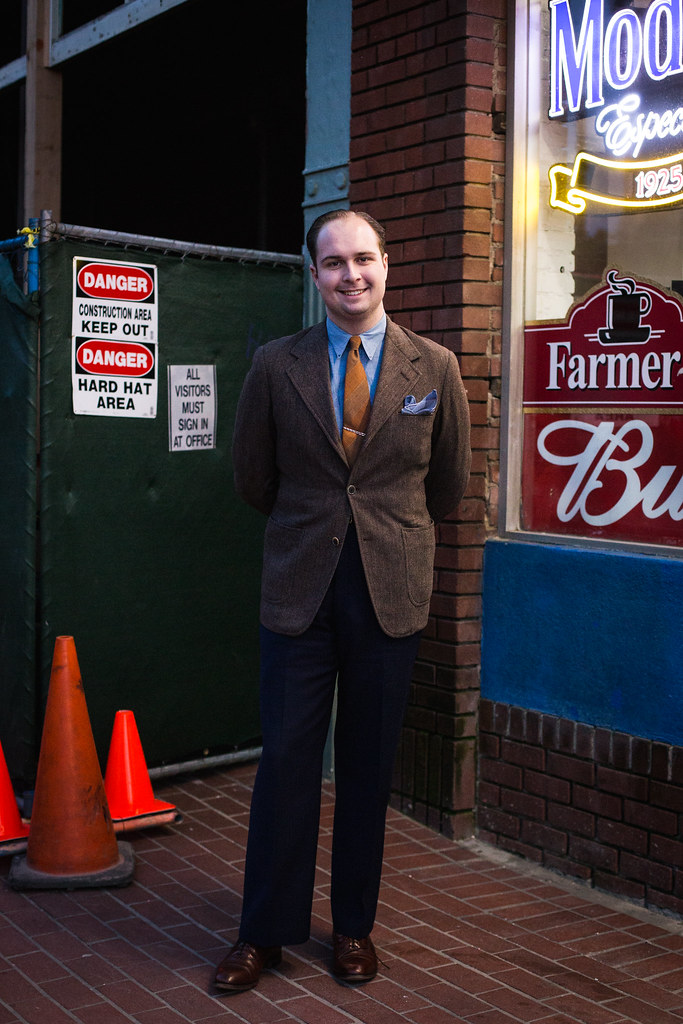 Spencer rocking a pretty simple ensemble, showing that you don’t have to go all out when it comes to have a Golden Era inspired ensemble.  He rocks a brown belted back jacket (cut from a soft, flannel like wool) with navy suit trousers.  The play on textures allows him to experiment a bit with other fabrics, like his signature denim workshirt (worn as a dress shirt) a gorgeous striped Palm Beach tie.  As I’ve explained in this article, Palm Beach is an rare fabric  comprised of mohair, wool, and linen/cotton in unknown percentages.  It doesn’t exist anymore (other than surviving suits and ties), so it’s definitely a cool detail in both fabric and the colors of the tie (brown ties are also old school). 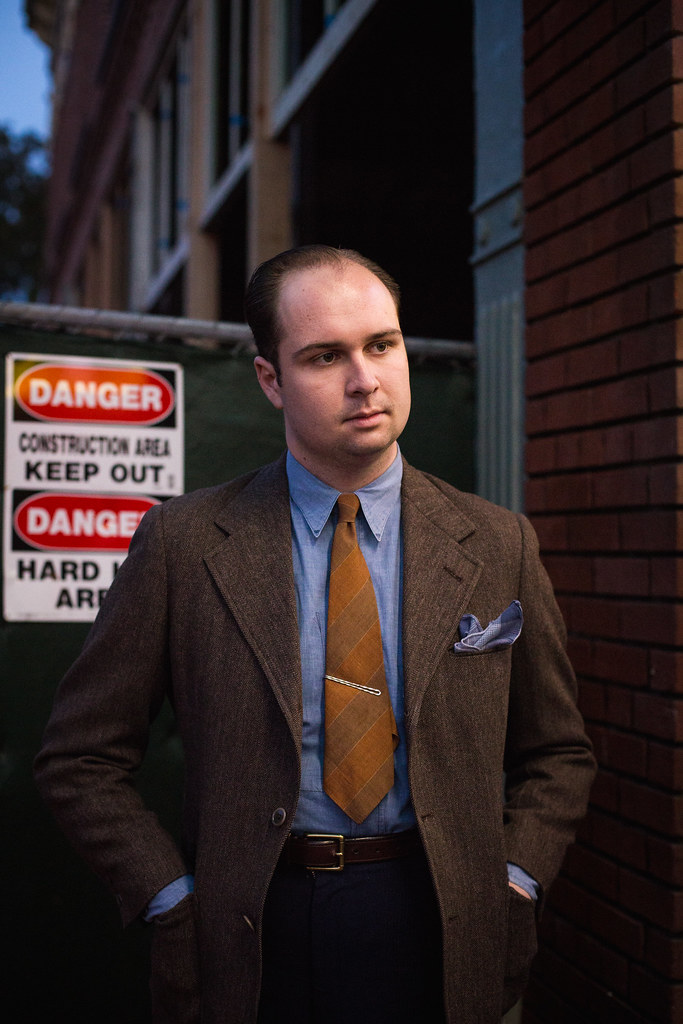 As I’ve stated before, patch pockets are an excellent detail to have on a jacket.  You  get to stuff your hands (or anything you carry) in there for a completely utilitarian purpose.  It’s a common theme that we tend to do; its not just to take a cool picture.

Note that Spencer’s look is actually really simple, as the tie is the only visual pop in the outfit.  His pocket square is blue (with different shades) which helps pull in the light colored blue of the shirt and the dark blue of the trousers. Well done!

I’d also like to point out that Spencer isn’t actually wearing a 1930’s jacket, but a 1970’s one!  It’s not as crazy as you would think but that’s because the buttons are properly spaced (the bottom button is on the same line as the pocket, so it isn’t a low button stance) and it’s in the classic ivy 3-roll-2 configuration! The wide lapels help make it a classic garment. 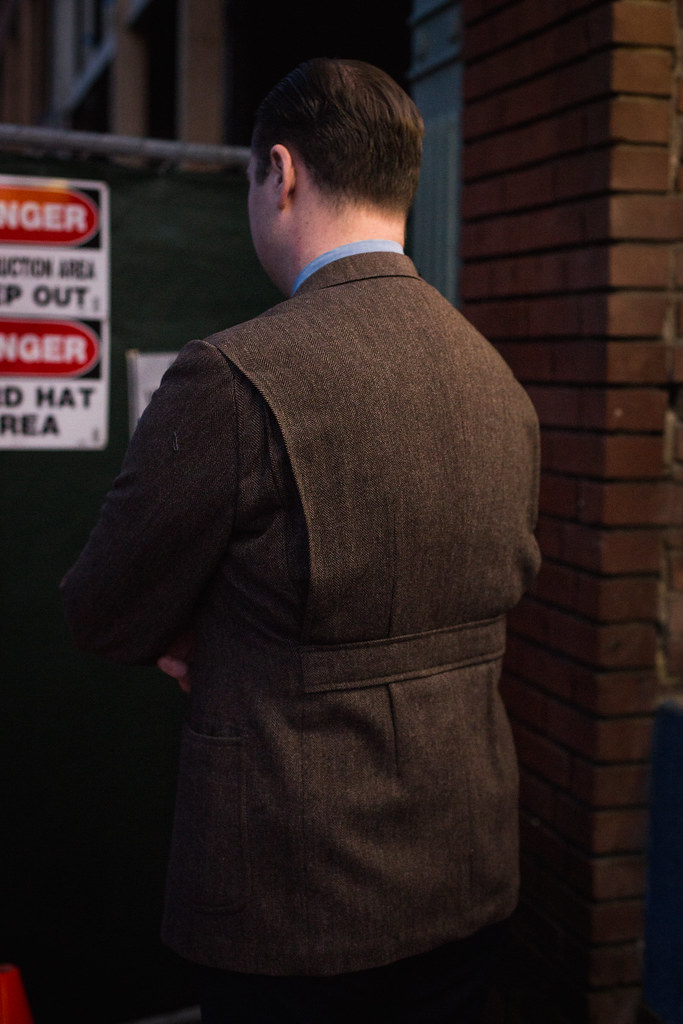 Here’s the money shot you’ve been waiting for.  Just look at that belted back! The arm pleats allow for more movement (like my 1930’s linen one) while the half belt in the center pulls in the excess fabric and greats some great waist supression and figure.  Action backs and belt backs haven’t been made in widespread use since the 1970’s (they were huge in the 1930’s) and it’s something I wish more guys would have today due to its largely utilitarian  (arm movement!) and flattering purpose. 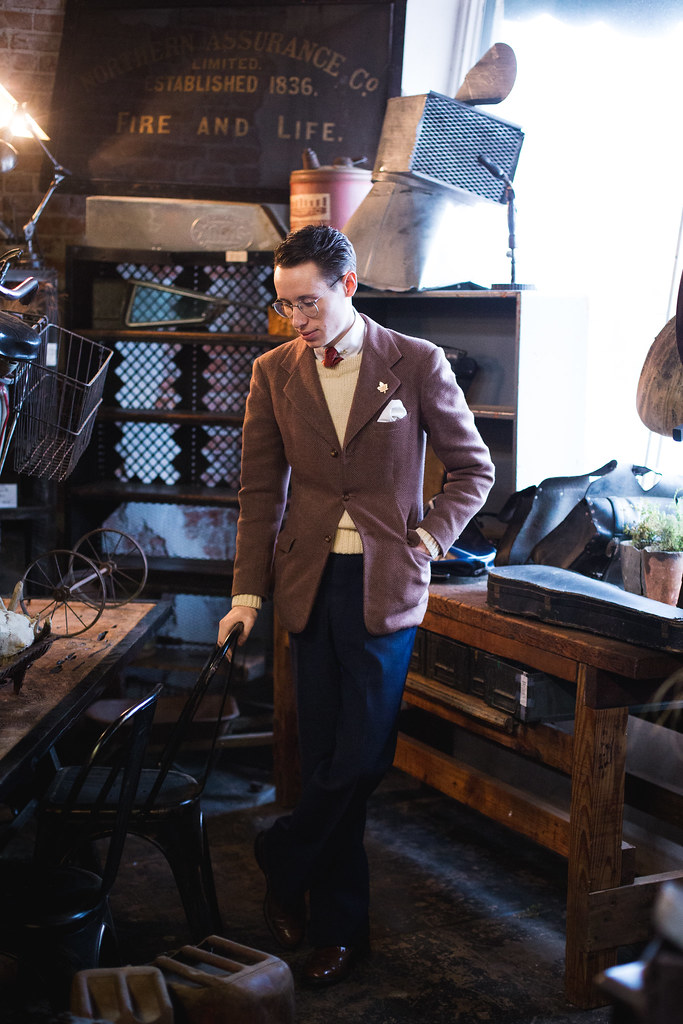 Blake decides to take it up a few notches with some more splashes of color in his ensemble. Right off the bat, you’ll notice that his jacket is a brighter shade of brown (compared to Spencer’s) but it still pairs nicely with his navy trousers.  Since it was a slightly cold day (and Blake has hardly any body fat), he wears a chunky knit boat collar sweater. It’s similar in weight to my Cowichan! Like Spencer in the Laurence Fellows post, he adds just a slight touch of red that is slightly bold, but is grounded by the earth tones of the rest of the outfit.  If you look closely, the tie is pretty shiny and vibrant. 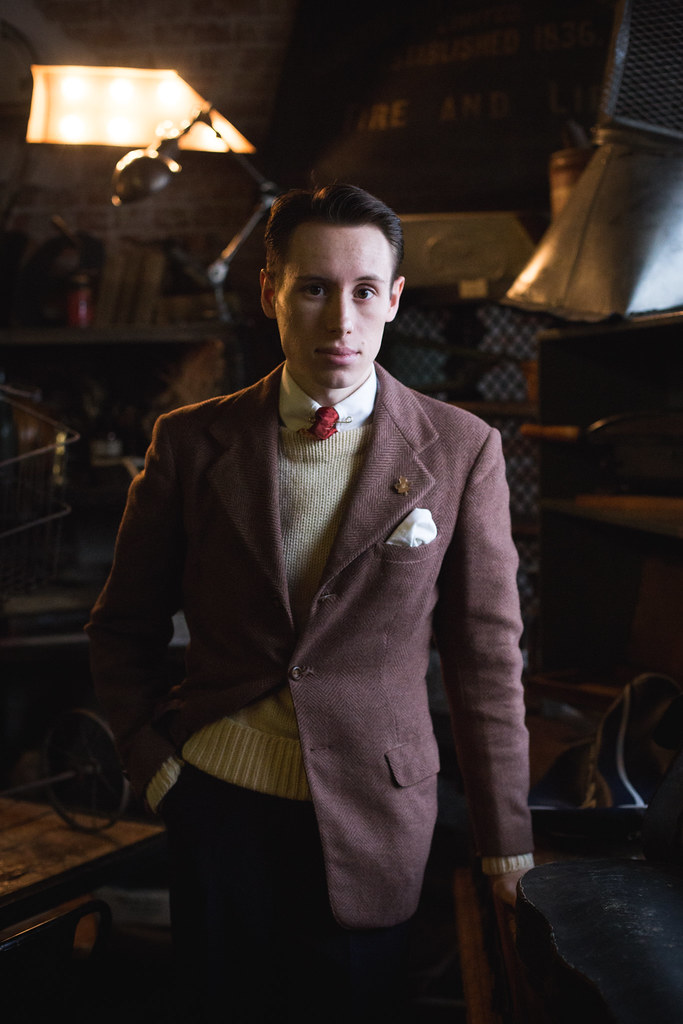 Here’s a great example of why navy trousers work.  Blake has a pretty “top heavy” outfit, mixing textures and slightly saturated colors, but the dark nature of the navy blue helps anchor it in.  Grey trousers could work but going with grey sacrifices the deep saturation of navy.  It’s the effect of wearing black without wearing black (which is a hard color to wear)!

Also want to point out the differences between Spencer’s jacket and Blake’s.  They both are 3 button, brown jackets but they are obviously from different eras.  Blake’s 1930’s herringbone jacket is much more padded in the shoulder (as was the intended figure for the 1930’s) and has a slightly different lapel.   His lapel rolls to the top button only (can be worn with the top buttons fastened) and the jacket has some aggressive darting for waist suppression, but see how Blake’s lapels feature rounded edges. This is a huge contrast when compared to the sharp edged lapels of Spencer’s jacket. This is one of the key differences between 1930’s-1940’s lapels and the ones of the 60s and 70s. 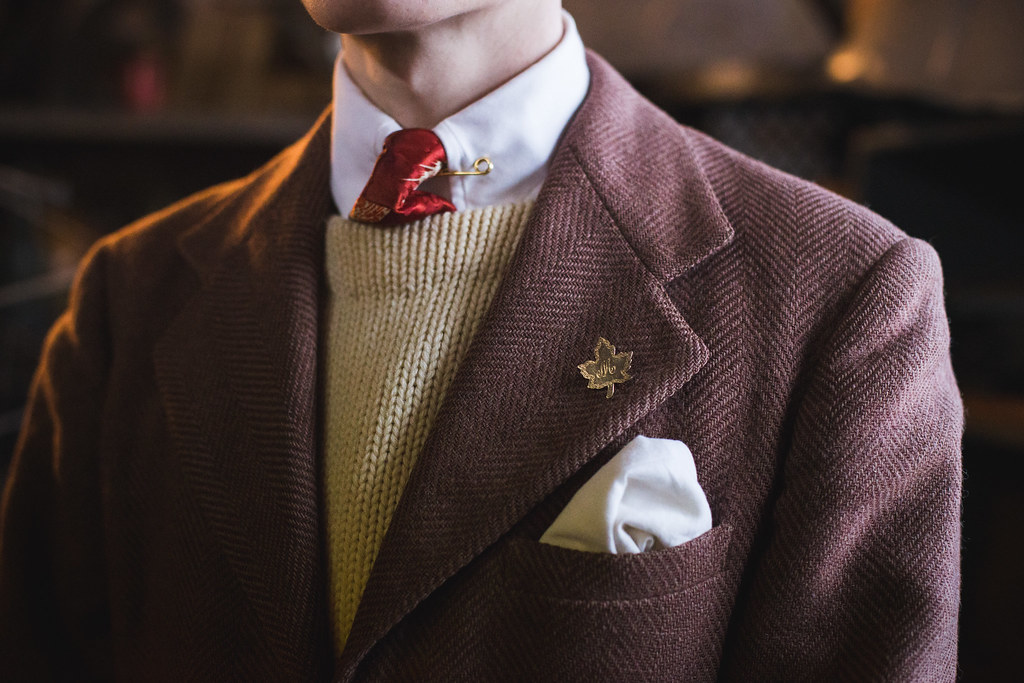 Extra points to Blake for matching his metals!  He wears a gold collar bar (for some 1930’s style pointers) which corresponds to his leaf “M” pin, given to him by his girlfriend Mila!  Everything is great except for the pocket square; I much prefer the exploding pocket square instead of the puff! 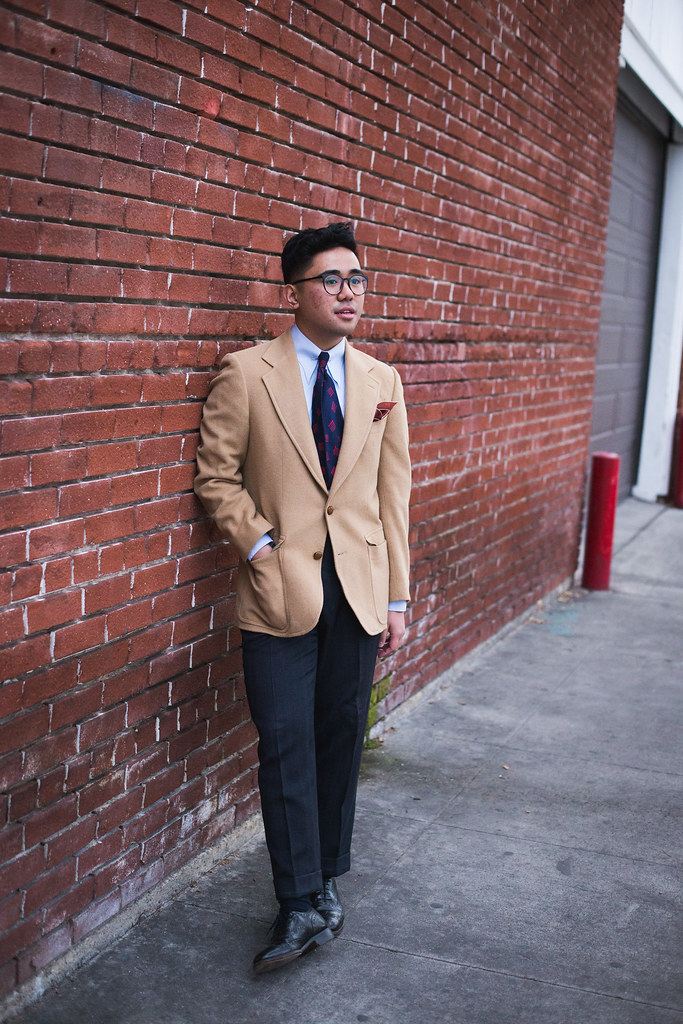 I went for a much more “modern” approach with my ensemble, choosing to wear a camelhair sportcoat (with patch pockets) instead of my usual dark brown flannel one.  I will admit that I got inspiration for this look from the Armoury, which has their own awesome Ring Jacket (which also has patch pockets) cut from a luxurious baby camel hair. Just like Blake, I think that my navy trousers help anchor the outfit down especially since I’ve got a pretty saturated top half.  I don’t think grey would have worked as well as the grey, since you do sacrifice the power of deep color. 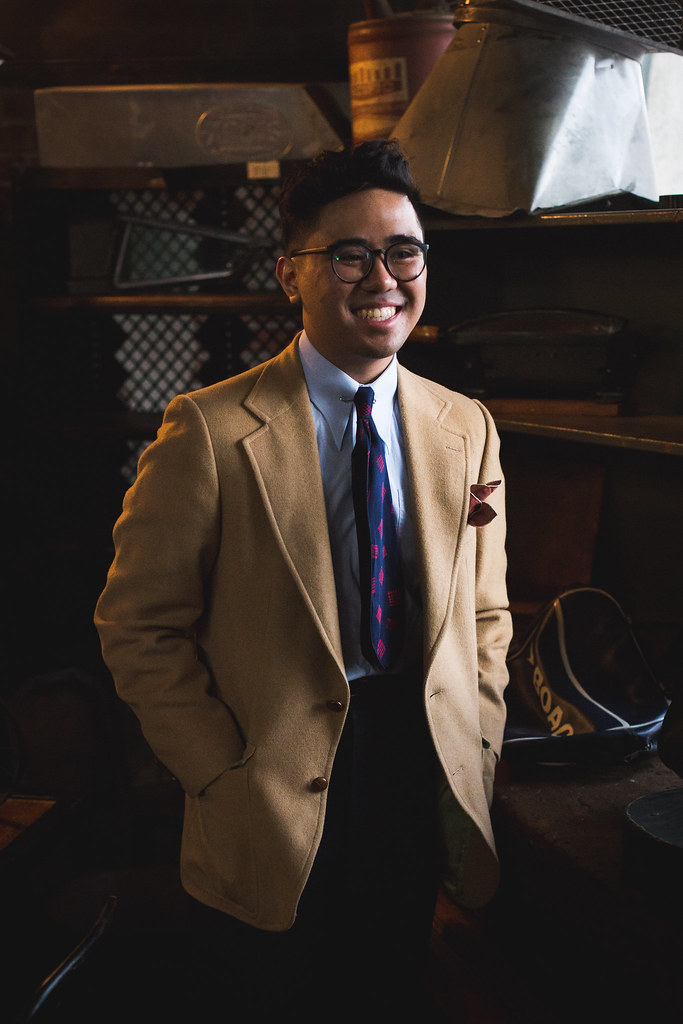 Camel really is an underrated color when it comes to sport coats, though it has been taken over by streetwear in the form of the topcoat.  I can’t really find an example from the 1930’s but its definitely an ivy sort of jacket.  Either way, it’s a fantastic color that is much different than the normal sport coats that people wear.  When it’s cut from 100% camel hair and in this light “honey” shade, it’s a great fall/winter piece to use instead of the typical khaki chino jacket. Same color, just different texture!

By the way, I thrifted this jacket for $6 from Goodwill!  It’s half-lined and features some gorgeously medium-wide lapels. The button stance is a bit low, but I had the lapels rolled slightly higher to  ensure that it has a classic look.  The lower button stance and the sharp edged lapels (which also has a high notch/gorge) means that this jacket is from the 1970’s.  In terms of actual alterations, I shortened the jacket as much as possible since the length was so long. 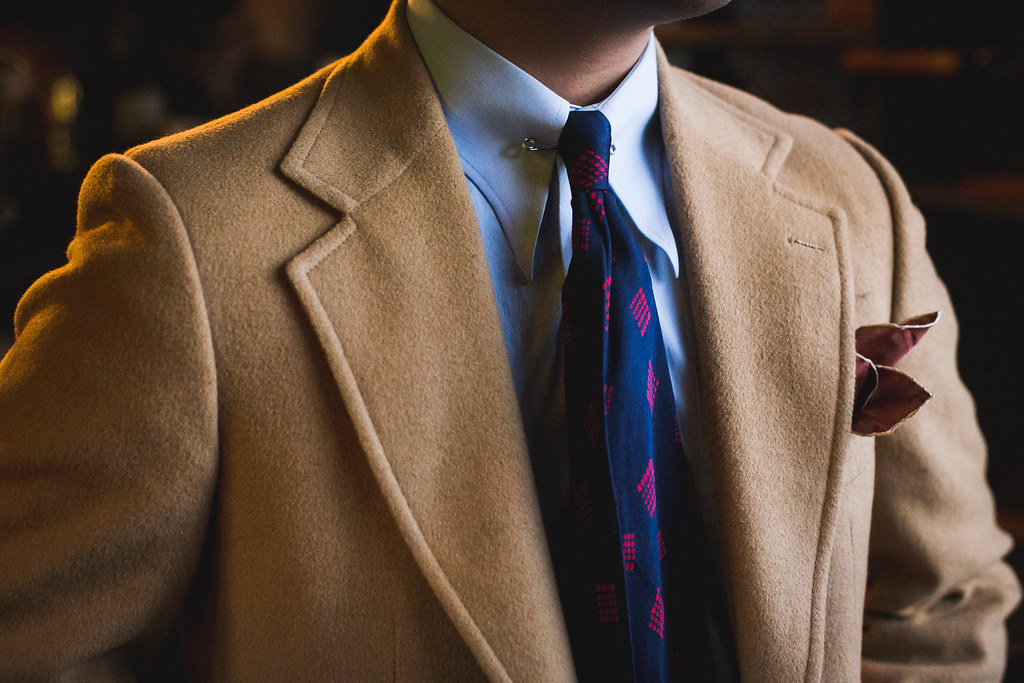 I maintain my love of long spearpoint collars, collar bars, vintage print ties, and exploding pocket squares, but I decided to take a break from my typical stripe shirts and went with a plain blue one!  Sure it’s a less interesting outfit, but sometimes you need to go for some solids!  Like Spencer, the color contrasts nicely with both the brown of the jacket and the dark navy of the trousers.

If you didn’t get it beaten into your head, here it is one more time: wear more brown jackets with navy trousers! The combo is much more interesting than the typical navy and grey, which in my opinion is more corporate.  Brown is seen as more “casual” in most fashion circles, but since it is seldom worn it gives off an old school vibe!   I say you capitalize on that and use it to tie together earth tones in a great fit.  Sure grey trousers could work, but I think that navy provides you with some needed deep saturation that still allows you freedom in your other pieces!

You don’t even need to buy blue trousers as separates if you don’t need to!  If you already own a navy blue suit, why not get the most out of your suit and wear the trousers as separates?  We may have a lot more clothes than the normal guy but we know where to maximize versatility when we can.  All of us are wearing the pants from our navy suits!

Just try to get a brown jacket in something textured, as we all wore in this post. Go with flannel or heavy herringbone; if you’re feeling more adventurous, take the leap with some camel hair! You’ll get bonus points if you go vintage with some wide lapels and patch pockets.  Whatever you choose, you’ll make a smart ensemble just as long as you pair it with navy trousers!