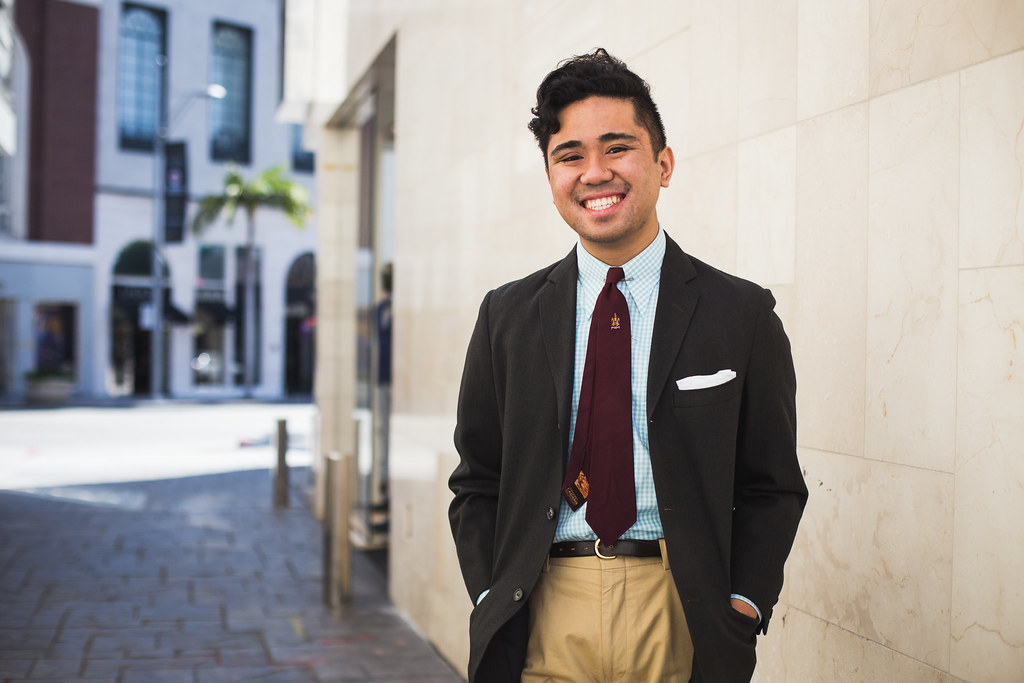 We’ve been talking about eBay a lot lately, thanks to the 3 for $75 deal and the recent vintage Brooks Brothers sack suit.  Even though eBay is highly curated (which makes it easy to find cool vintage pieces), nothing beats the thrill of hunting for cool stuff at thrift stores like Goodwill or Savers.  My latest pick up was this amazing, almost-deadstock olive green sack jacket!

Don’t fret you guys; I still love the 1930s and 40’s.  However, I’ve been really getting into ivy style of the 1960s! Pieces from the ivy era are still made with great care and feature a lot of the details that you just can’t find today.  As a result, I try and save any vintage garments that I come across during my thrifting runs! It just so happens that most of what I find tends to fit me.

I found this jacket at a local Goodwill within the racks of polyester suits and hideous lowbuttoning 80s and 90s jackets.  Based solely on running my hands through the clothes, I knew that I found something cool! A quick looksy at the details (lapels, label, lining) confirmed that it was a vintage garment.   Soft wool, microherringbone pattern, and 3-roll-2 configuration.  Thanks to the lights in the store, I thought it was a dark charcoal grey, but close inspection showed that it was actually a dark olive/forest green.  Pretty interesting!

Since it was the same Goodwill that I found the 1970’s brown flannel chalkstripe suit, I checked everywhere to see if this jacket was actually an orphaned suit jacket.  Unfortunately, no pants were found.  I was still enamored with the jacket, so I bought it anyway! 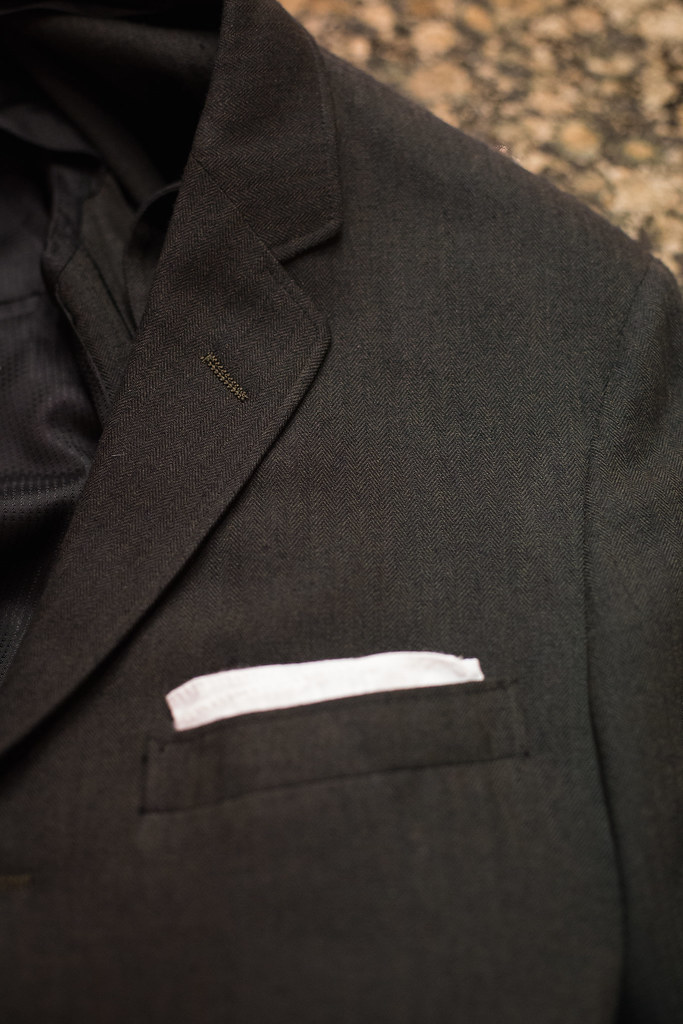 Unlike the ivy suit from Brooks Brothers, this suit was more “true ivy” thanks to its narrow lapels. The notch is placed higher on the lapel, which really gives an interesting silohuette.  The ivy look was about appearing slim and “straight”, which contrasted the bold look of the 1950’s where the masculine inverted triangle (broad shoulders, nipped waist) reigned supreme.  If you can’t tell, lapels really tell you a lot about the era. 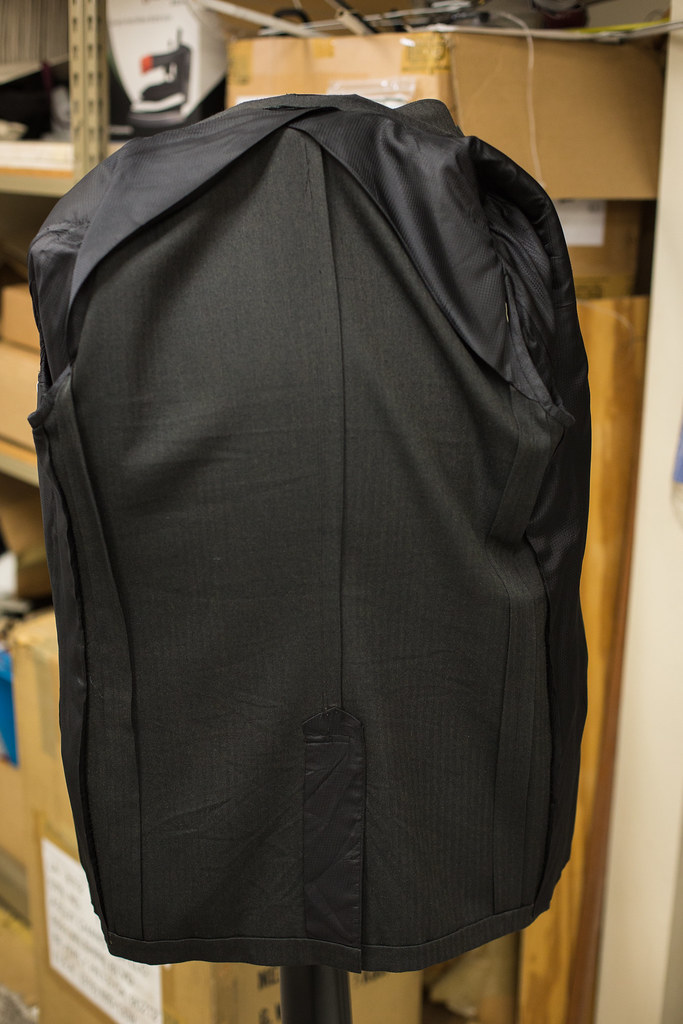 Like it’s vintage brothers and cousins in my closet, this jacket is half lined!  I’m sure I sound like a broken record by now, but I just love half lining.  It’s just enough to make a smooth wear but leaves the jacket exposed enough to breathe and showcase finishing details.  Some places still do this, but you’d be hard pressed to find a half-lined jacket in a Macy’s or Banana Republic. 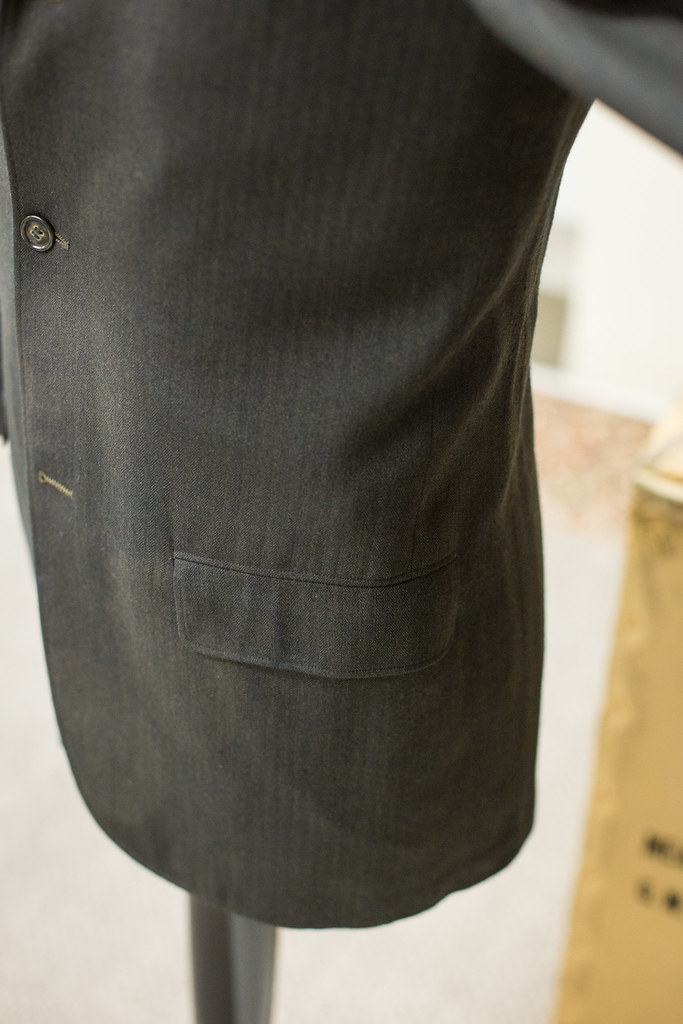 Lack of darts is the tell-tale sign of an ivy “sack” jacket.  It’s meant to have a straight fit without any waist suppression. 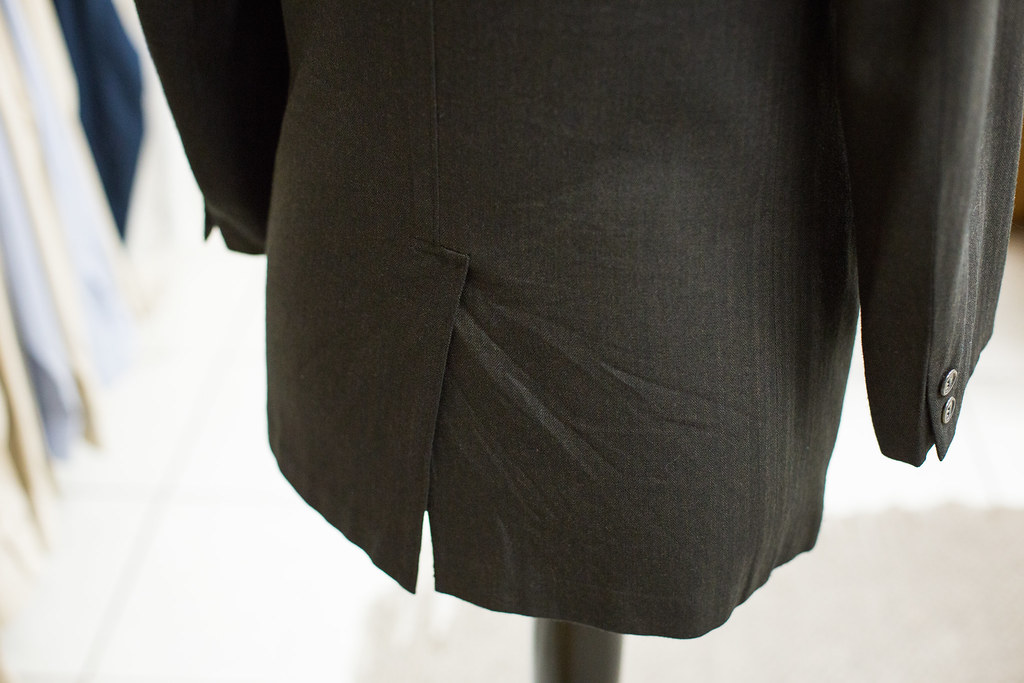 A “hook” vent: a small but important ivy detail. 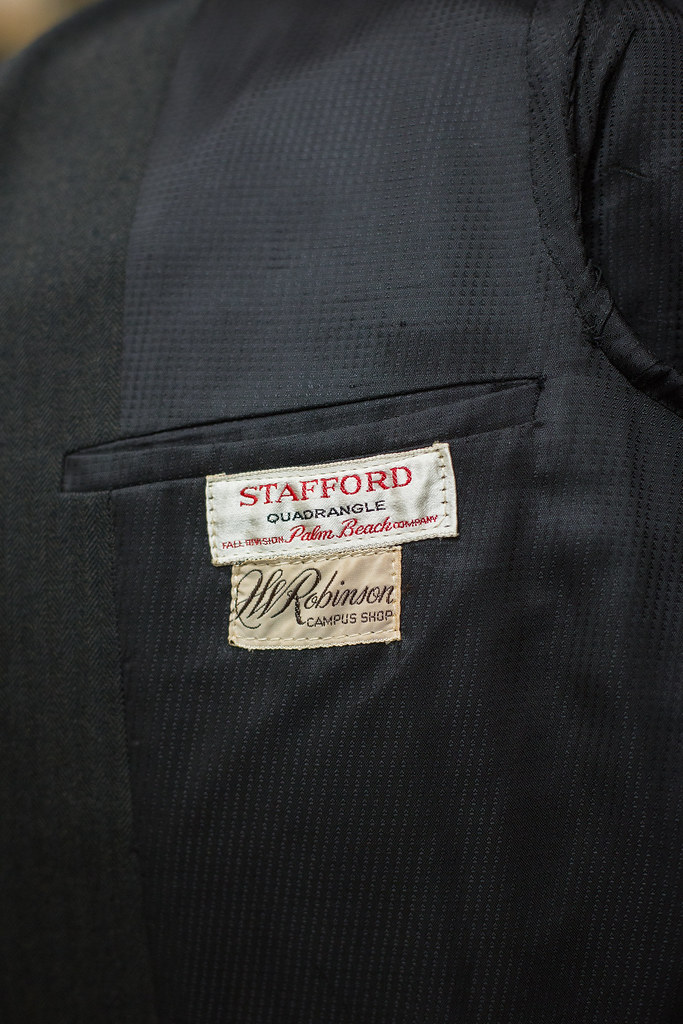 The suit was practically deadstock.  In addition to a lack of mothholes, the lining was in superb condition and the label appeared to be like new.  Amazing stuff right?  I love the small pattern/texture of the lining (which is rayon, not polyester). 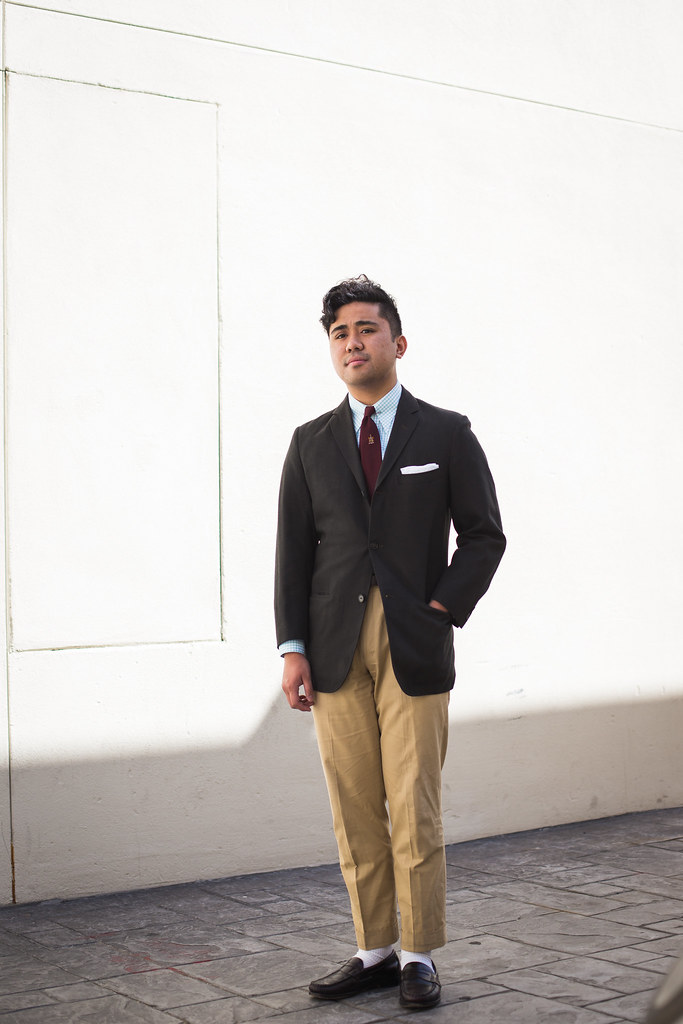 Because it’s such a dark jacket, you really need some contrast to bring out the color.  Everyone knows I love grey trousers, but I felt it was appropriate to wear chinos!  Not only is it for spring time, but these were the go-to trousers for young guys back in the 1960s.  To add more accuracy for the look, I also added beefroll penny loafers (that I also thrifted a short while ago) and white socks.  Almost a perfect representation of ivy university style! 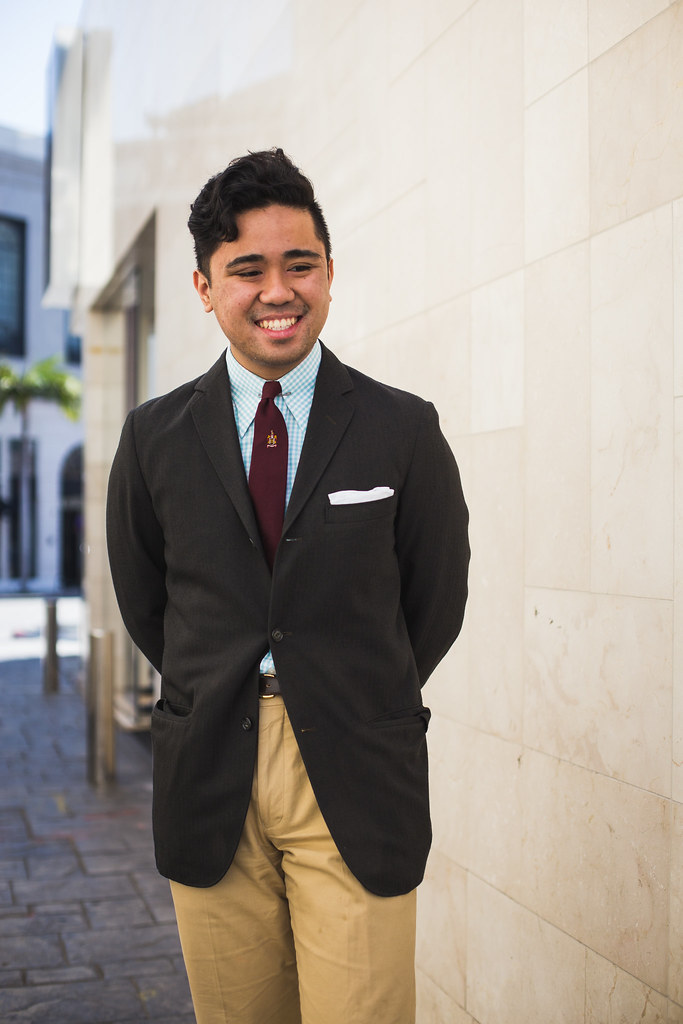 Slim lapels aren’t my preferred style (I like wide, droopy notch lapels a la 1932), but I can definitely appreciate them especially if they’re used to portray a certain aesthetic.  You can always do ivy style looks with suits form any era, but if you want to do it accurately, you gotta get the details down!  A regular 3-button suit isn’t going to be cut like this vintage one.  Even though the lapels are slim, it’s still a great jacket that I can definitely be seen with a variety of different outfits, whether or not you want to do ivy! 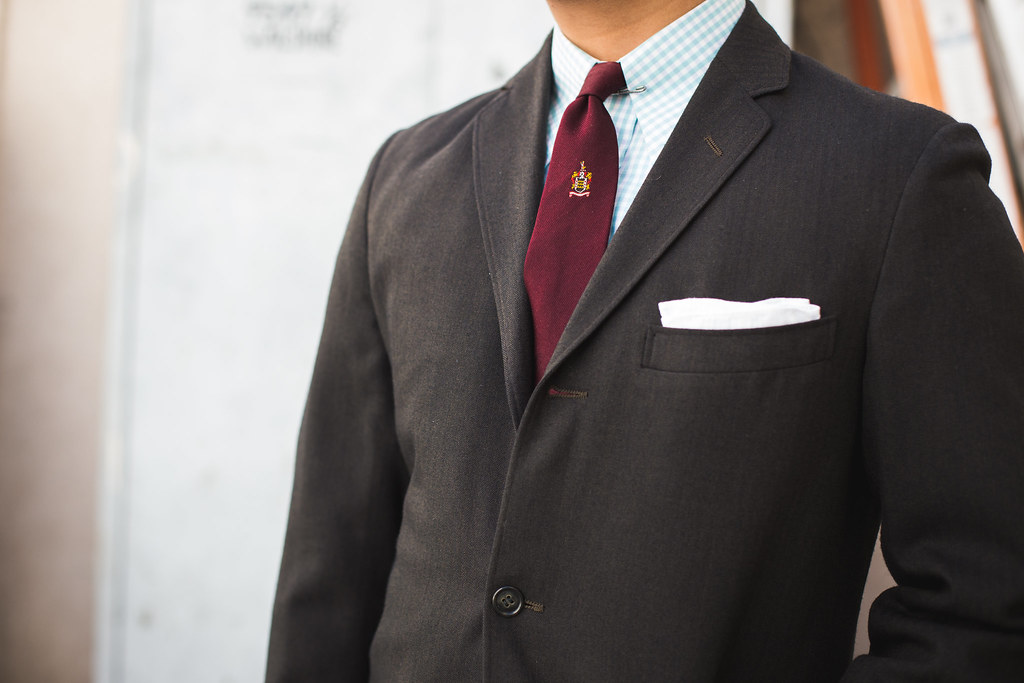 Okay, I’m full of shit.  Even though the overall styling is pretty typical for 1962 (especially the slim tie with the minimal monogram), I cheated and wore a green gingham spearpoint collar shirt and collar bar.  It’s not a big deal, but a point collar, club collar, or button down collar would have been a more accurate for the vintage ivy look.  The spearpoint adds just a bit of “classic Ethan” to the look and still looks great, I think! Also note the straight TV fold pocket square.  The exploding pocket square isn’t something that looks good with slim lapels.

I don’t talk about color theory much (mainly because I don’t get how to explain it) but I really like how everything works together! Obviously the honey-khaki chinos/white socks provide great contrast with the darker top half of the outfit. However, the olive green is also offset by the light gingham of the shirt while the dark is tied back in with the deep red tie.  There’s a bunch of color in the outfit, but I didn’t go overboard.  I think that’s due to the use of muted colors instead of bold saturation.

*I also want to say that the monogram definitely reminds me of the ties that Ryan Gosling wore in La La Land! 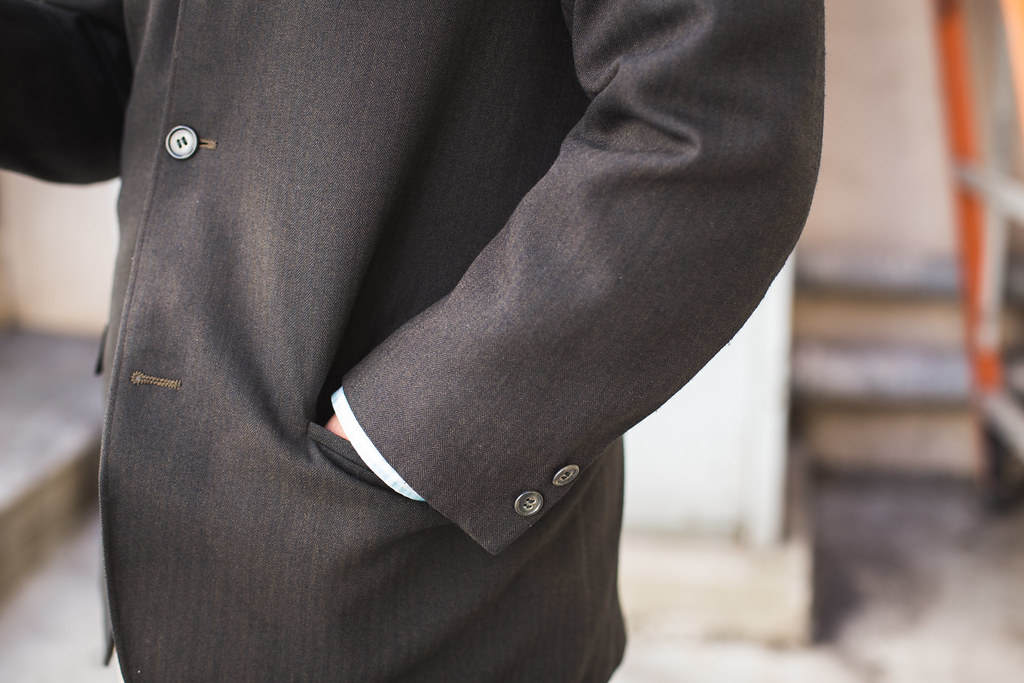 We talked about buttons once before, but here’s the fact again for you!  Kissing buttons and multiple buttons on a jacket sleeve is a relatively modern phenomenon, as vintage jacket opted for only 2-3 buttons that were spaced out.  The fact that this detail is present on the jacket only adds to the myriad of vintage specifics that it offers! 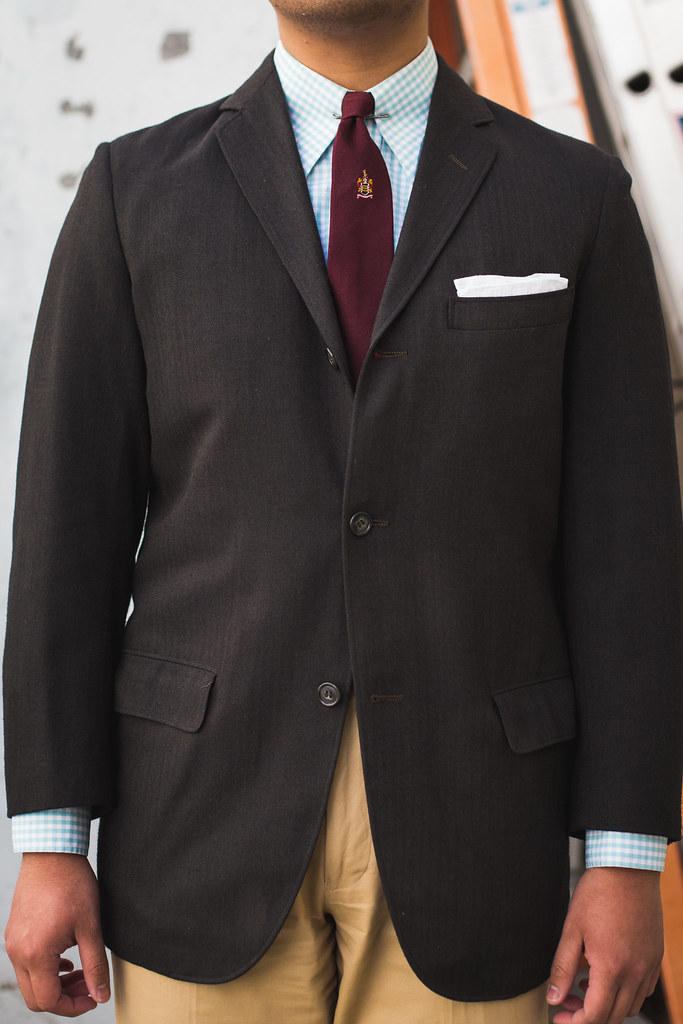 Here’s the overall fit of the jacket. As you can see it fits pretty close to the body without having to use darts or waist suppression to create a figure.  There’s no pulling on the center button, which means it fits quite well!  The sleeves are the only problem, since they are much too short.   I don’t remember if there’s that much extra fabric to let out, but it’s not that big of a deal for me.  If I have time and extra cash in the future, I’ll fix it!

I hope you enjoyed this latest thrift store find! It may not be as cool as a $3 3PC chalkstripe suit, but this olive green 1960’s sack sportcoat is still a fantastic find! I encourage all of you guys to check your local thrift stores regularly and rigorously.  You never know what you’re going to find!