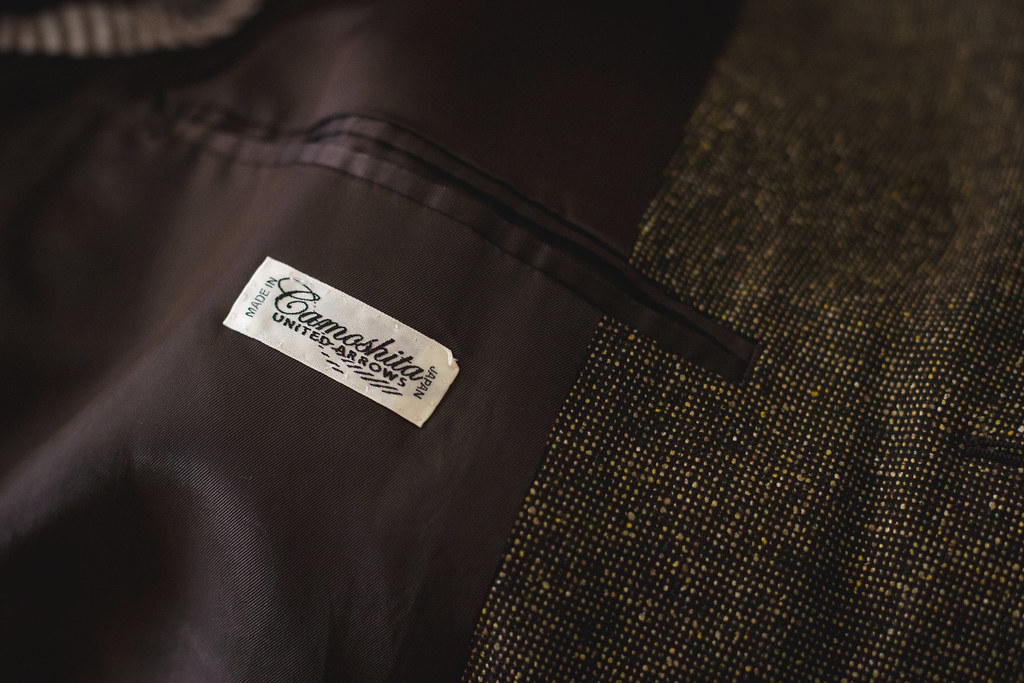 Deals are always great, especially when you’re a menswear enthusiast who doesn’t make make very much money.  I honestly think that this is on par with my $3 chalkstripe suit, just by comparing cost to value.  It’s probably because this is an amazing modern piece that retails for over $1k.

Camoshita is a label in 2007 by Mr. Yasuto Kamoshita of United Arrows.  Apparently, “K” was Japanese looking (which it is), so they went with the “C” spelling of his surname to make it more Italian.  Now if you haven’t heard of Mr. Kamoshita and his label before, you’ve probably seen him.  He’s probably one of the most jovial, photogenic menswear guys I’ve ever seen! His style is everything.  It’s a little bit modern, a little bit Ivy (love that 3-roll-2 in the first picture), a little vintage (note the wide lapels and pattern mixture) with a bunch of sprezzatura thrown in.  Mr. Kamoshita wears his clothes however the hell he wants, and I love it.  He’s just so comfy in his garments!

His style is reflected in the products he designs.  His casual stuff is pretty standard, with breton-stripe tees and plain pocket tees; he’s even thrown in some cool band collar shirts for spring/summer.  The best part is his tailoring.  Even though his trousers aren’t  high rise, they’re still designed very well with extended tab closures and pleats.   The jackets are a mixture of ivy and Italian suiting,  featuring wide lapels, 3-roll-2 button configuration, and very unstructured/soft shoulders and body.  Comfort suiting is done this way, not with jersey knit fabrics or “performance wools”.

Even though this type of suiting (bar the pants) is what I love most, the price tag is pretty high for my taste.  The most I’ve ever spent on a suit personally was $500 from Suit Supply and my most expensive suit was $650 (also from Suit Supply) which was a gift from my mother.  Camoshita retails jackets for $800~ while the trousers are $400. This isn’t insane when compared to bespoke or MTM stuff, but it is pricey when you look at other RTW stuff like Suit Supply or Eidos.  Hell, it’s super-fucking-insane when most of your recent wardrobe was purchased for $25 per suit before tailoring.   I was pretty sure that I’d never be able to own a Camoshita suit.

If you haven’t been to the Dapper Day Expo yet, you should because it’s filled with great music and a few vintage sellers.  It is geared mainly toward women, but there are a few guys (who aren’t Benny Reese) that sell men’s stuff.  Fortunately for us, these vendors don’t know too much about what they were selling.  I found some great 30s and 40s pieces among racks of 70s-90s stuff.  It might take some sifting through the polyester, but you could get lucky like I did.

One of the vendors had a very modest menswear selection, with a few 70s shirts and suits.  I thought that her 70s poplin Brooks Brothers suit was pretty good (40L, way too big form e) but then I found something else tucked in between it all: a brown/yellow flecked suit.  It felt kinda weird, so I looked that the tag, which said “late 1950’s suit, $75”.  This wasn’t a 50’s suit or a 60’s suit, even though it looked pretty good. The jacket fit perfectly, with a 3-roll-2 button configuration, wide lapels, and a ticket pocket.  However it was much too soft to be vintage!  When I saw the Camoshita label on the inside, I was ecstatic. 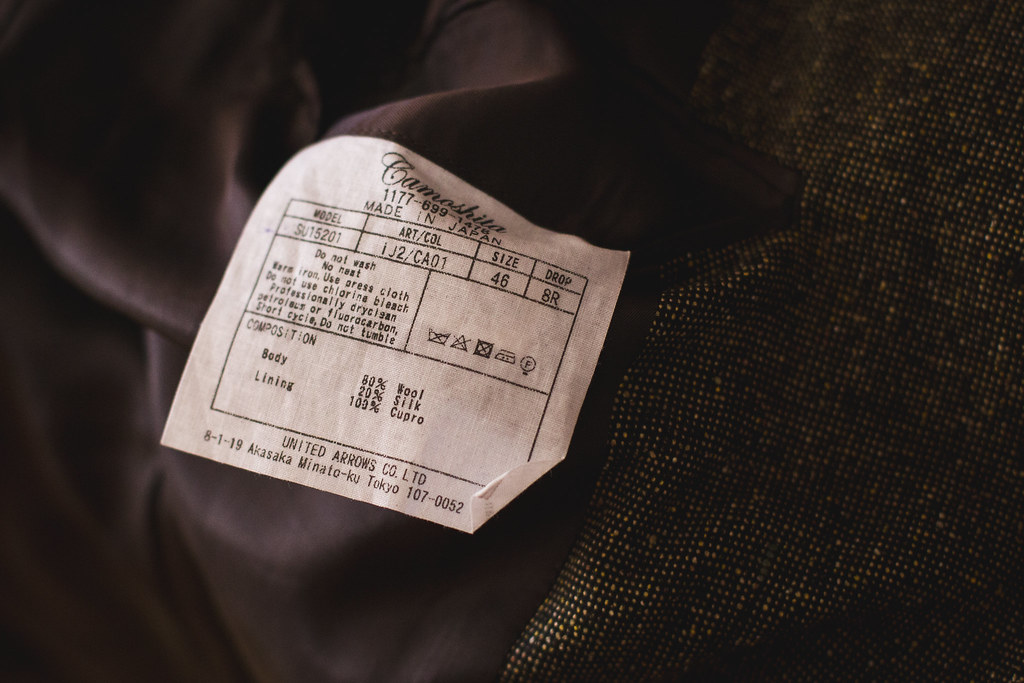 Wool and silk?  Unstructured and soft shoulders? Hell yes.  I needed this suit.

Unfortunately, I wasn’t able to try on the pants when I bought them but they sales associates had some measuring tape so I could see if it was worth it.  The waist was about a 33″ (with nothing to let out), the inseam was 32″, and the cuffs were 2″. The trousers should be able to fit (the jacket fit perfectly), so I gave the lady my $75 and went on merry way.  It wasn’t until a few days later after some Dapper Day recovery that I was able to finally take the suit to tailor and try it on.

As you can see, the pants were way too tight especially in the thigh area. They don’t look too bad, but they honestly look like a pair of nice jeans just cut in an extremely soft, drape-y flecked fabric.  I was also dissapointed with the rise, since these are pretty short, hitting a little over an inch below my belly button.  Here’s what I told Ruben to do.

– Let out the ass

– Let out the thighs as much as possible 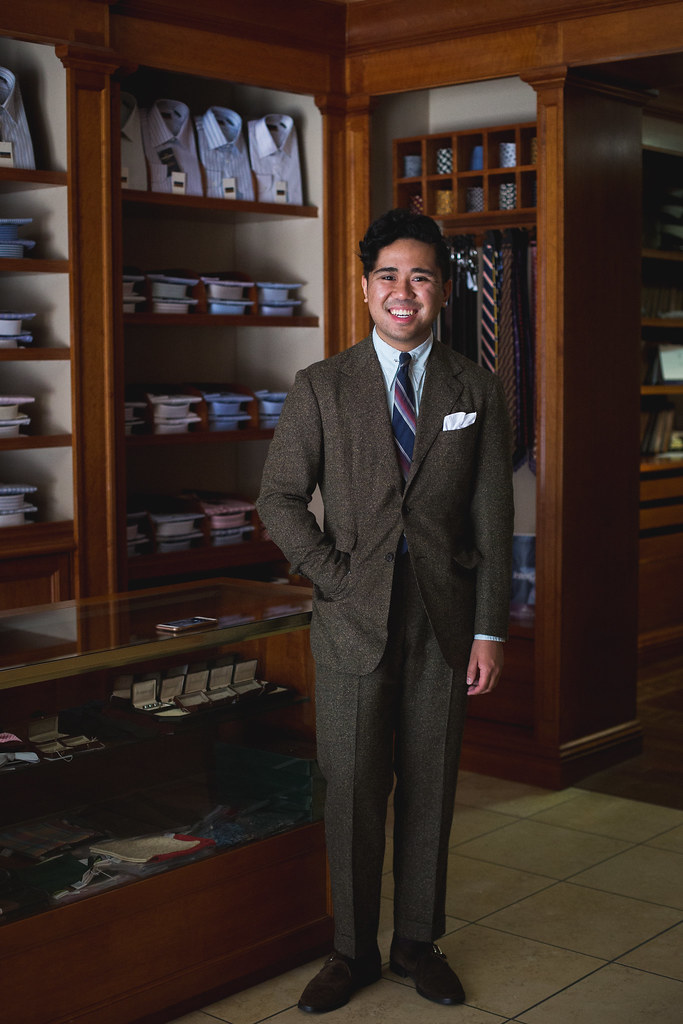 Here’s the entire suit, put together! You can really see how amazing the suit is, with so its classic (dare I say vintage?) design.  It’s definitely a 50s-60s inspired suit with modern Italian construction.  Thanks to its soft tailoring and classic look, it just might be my favorite suit.  It pretty much looks like a tweed suit but is actually much softer and comfortable.  Makes sense, since I live in Southern California! 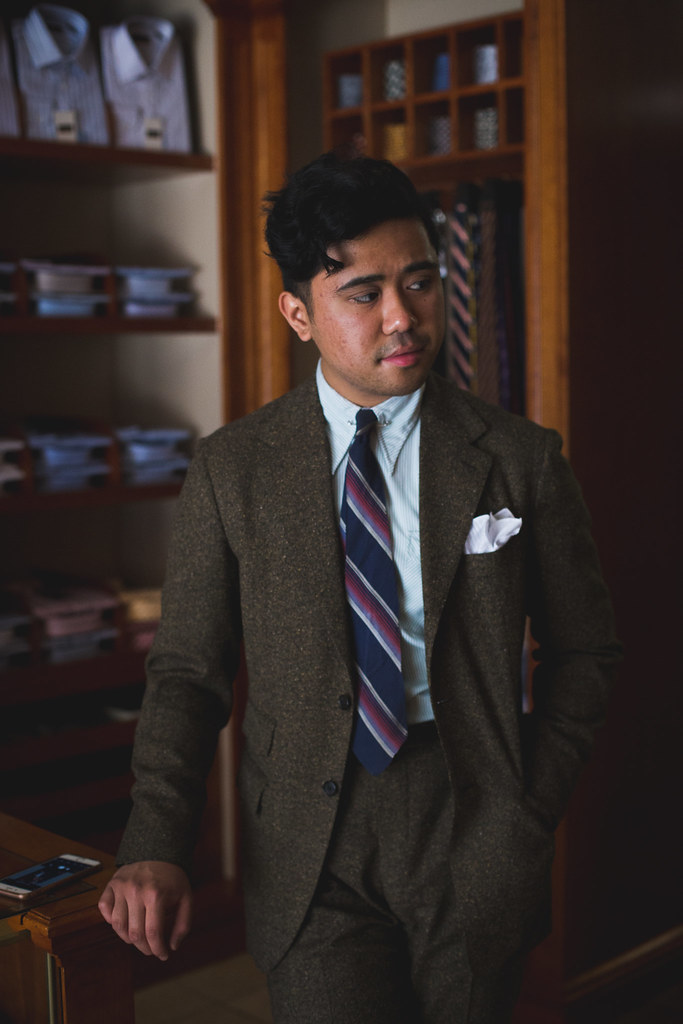 The color and pattern of the fabric seems  tricky to wear at first, since it’s a brown base with greenish-yellow flecks; not exactly the typical suit you’d find. Obviously plain shirts like white or blue would work, but I definitely like to have some 1930’s style by mixing  flecks, stripes, and checks.  I ended up going with my green stripe spearpoint shirt and a blue/red 30’s stripe tie.  The green of the shirt is different than the more “earthy” green hue of the suit, which allows the shirt to pop just a bit while the navy blue of tie anchors the outfit; the red adds just a dash of color without being too blatant.  Overall this is one of my favorite combos and is perhaps a more interesting take on the similar vibes of the Indochino suit. However this outfit has much more going on and  exudes more of the 1930’s styling that I love while still containing enough comfort and slouchyness that I like to have overall. 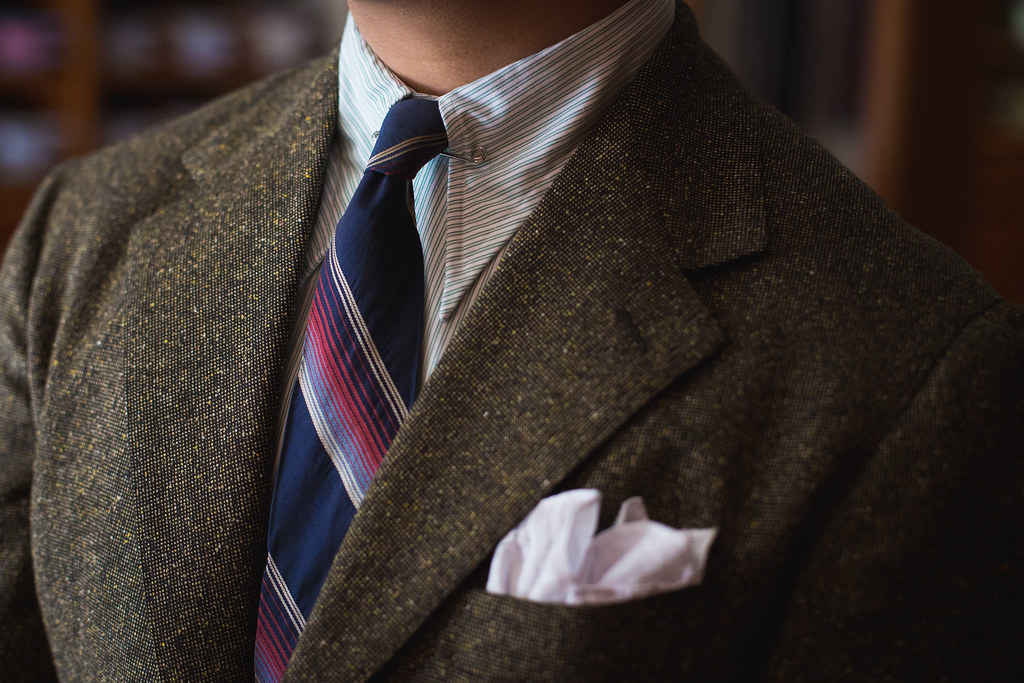 If you learn nothing from me except one thing, make it this: always wear stripes on stripes. I think it looks badass whether you do it with a plain suit or a flecked one like this.  I think its much superior to plain and polka dot ones that most men tend to wear. 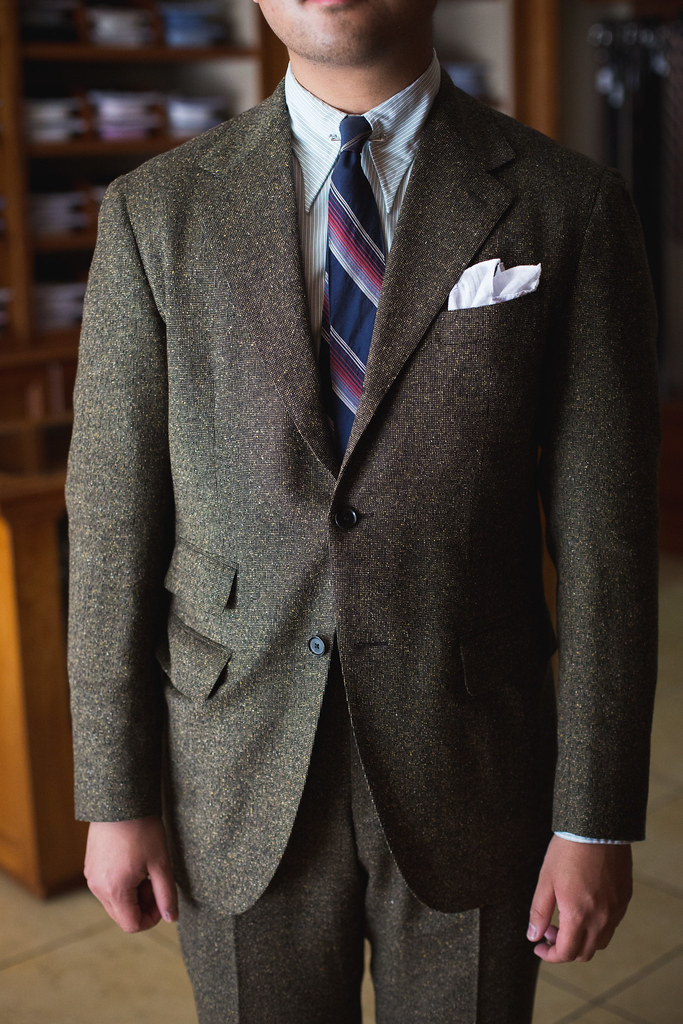 You can definitely see the softness of the shoulder here. It follows my natural sloping shoulder line and continues almost seamlessly into the sleevehead.  Most guys (like Blake) prefer some structure, but I definitely like to slouch and relax in my clothing, even while I’m standing!

Even though this is inspired by the ivy sack suits, it’s pretty different.  The lapels are noticably larger with a much wider notch that is placed a tad bit lower on the lapel.  The edges are slightly blunted which makes it comparable to suits of the 30s/40s. Also note that the last button is placed higher than the pocket line, which results in a higher buttoning stance.  Most 60s ivy suits have their bottom button in line with the pocket, but they also have much more space between the three buttons.

The jacket is also cut slightly full in the chest, but there is enough waist suppression to give you some figure.  Compare this to ivy suits, which had no darts and had much less figure present.  Either way, all of these details come to show that Mr. Kamoshita did a really fantastic job blending ivy and Italian tailoring together. 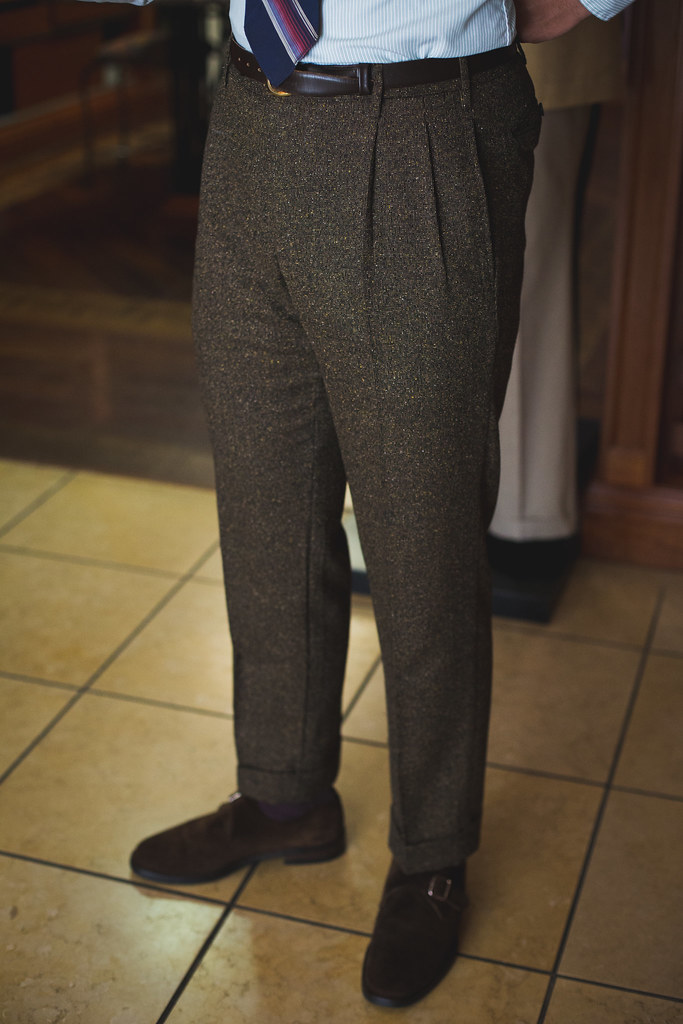 The trousers are double pleated, which is fantastic, but the rise was small.  I let out the ass-crack part of the trousers as much as I could so that the pants would be able to comfortably sit higher on the waist.  The entire leg was let out to fit me much better, but it made me misjudge how much we had to shorten the trousers by.  As a result, the trousers were shorted a little too much, so I’m going to have to take the pants back to be fixed; I may even try to let out thighs a bit more.  For now, I have an awesome sport coat that is pretty versatile.  Here it is in a more ivy-inspired look! 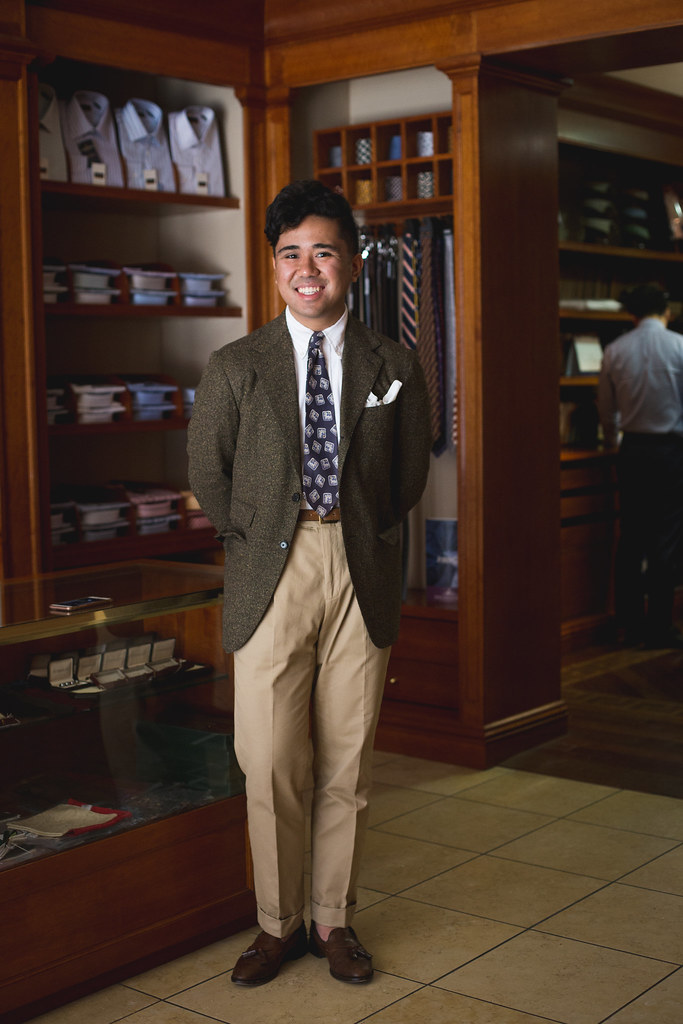 I’m pretty happy that I was able to get this suit, especially due to the price.  I usually advocate buying vintage in order to get quality pieces with detail you can’t find anywhere else, but sometimes there are new designers who still kick it out of the park! We may not always be as lucky as I am, but it goes to show that you should thrift/eBay as much as possible and educate yourself on brands and details since you never know what you’re going to find.  If this suit was on Luxeswap or eBay with the price still on it, it would have easily fetched $200+.  That still isn’t bad, but $75 is still a fantastic amount to spend on such a wonderful garment.

Another thing to takeaway here is the power of fabric and soft construction.  The latter allows me to wear this suit year-round and add layers if necessary!  It could wear the jacket with some white linen trousers or I could pair a tee-shirt with the suit pants for a casual look!  The pattern/texture adds some interest to the outfit while the fabric construction itself will ensure that you are comfortable all day long; most people forget that suits can be extremely comfortable even in hot weather.

Camoshita and its creator are excellent.  If you have the money, I’d definitely recommend getting at least a jacket from them and wearing it with your high-rise trousers (since they don’t really make that).  Also note that these trousers were pretty slim so get ready to get it tailored or buy a few sizes bigger to compensate.  If you can’t justify spending that money, then go vintage! Like I said earlier, Mr. Kamoshita takes inspiration from ivy style suits.  While vintage ivy suits may not be as soft as this one, they were still made with high quality construction, natural shoulders, and a slightly-full cut to be comfortable.  If there was a way to have the structured 30s look with 60s comfort, I’d do it; thankfully the modern answer we have is Camoshita.  Just don’t forget to style it accordingly!