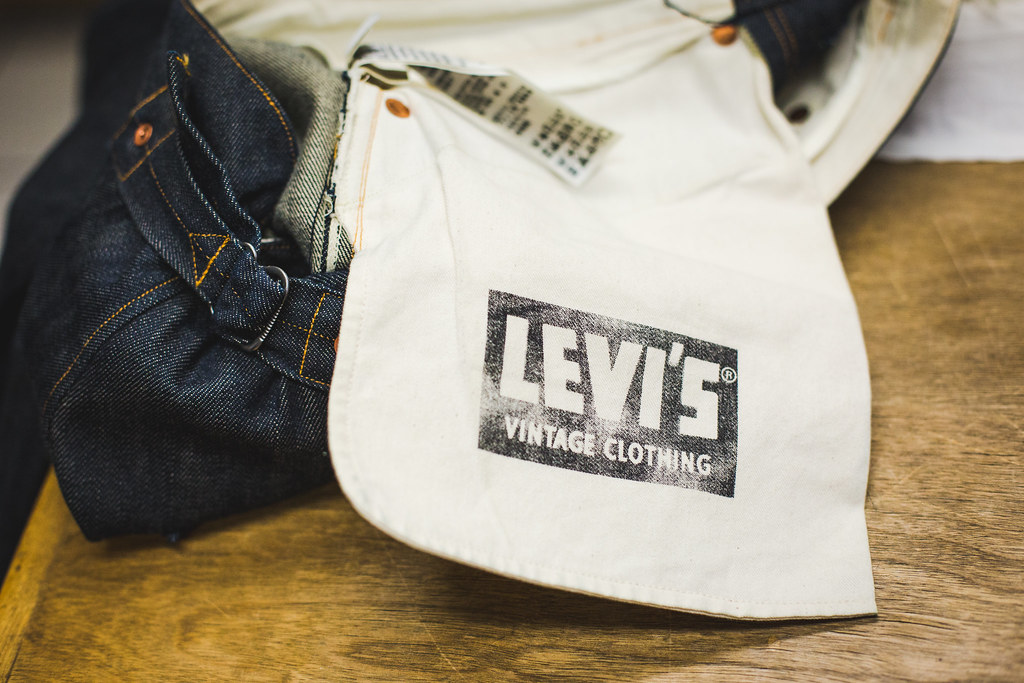 It doesn’t matter if you like Scandinavian minimalism, workwear, or something tailor-focused;you gotta have jeans.  I am no stranger to denim, but I never thought I’d get jeans from 1878.  These were such an oddity but they fit well, so I bought them.

Okay I lied.  They’re not really from 1878.  If they were, they’d probably cost thousands of dollars and would be in a dilapidated state.  These jeans (or denim pantaloons) are apart of the Levi’s Vintage Clothing collection where they reproduce old models.  By just browsing their website (and avoiding their odd Spring choices) you can see some of their coolest stuff, like the 1933 501 model with suspender buttons, cinch-back, and high rise or their more contemporary 1976 Mirrored.   Hard core readers of Street x Sprezza will note that I tried some of the LVCs when I took a mini-vacation to San Francisco last fall.

The LVCs are very expensive and very rare, depending on where you look.  The website lists a few models (almost all are cut from raw, selvedge denim) and they cost about $300~ each.  Pretty expensive for a pair of jeans, right?  What you pay for is the detailing that you can’t find anywhere else.  Based on some conversations I’ve had with Spencer and a few other vintage people, other reproduction companies charge near the same amount and typically only reproduce stuff  from the 1940s-1960s.  If you want to get super old school, you gotta go with LVC.  Even then, stock is always limited with LVC and not many stores carry them. 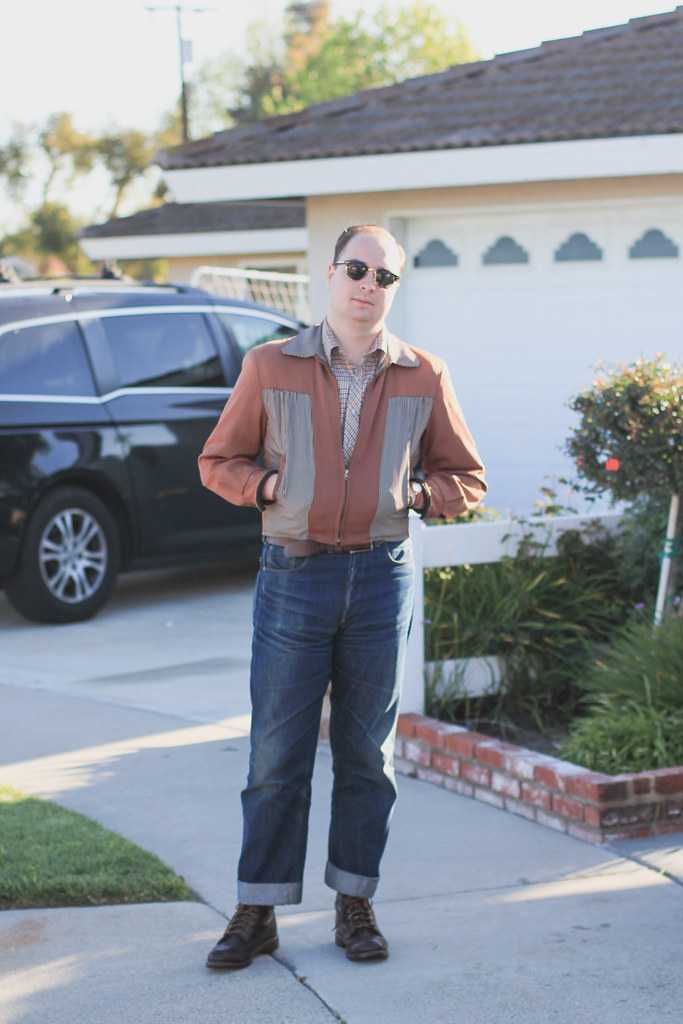 All of these qualities, especially the price, are reasons why I didn’t go with LVC. While I am a stickler for vintage details, I’m not really a denim head.  I don’t care for soaking jeans or having pure selvedge.  However, I did end up buying selvedge Levi 501s in their custom tapered model when I decided that it was time for me to have some high-rise jeans in my life.  So far they’ve held up and done an excellent job whenever I use denim with my tailoring.   I didn’t think I would need another pair (especially since I’ve thrifted other jeans) until I walked into Joyride last weekend.

I intended to buy a some pocket squares, since I mainly use white ones, but I ended up looking at their denim table.  There were a few 60s Levis there and some RRL chinos, but a tough pair of selvedge caught my eye.  I noticed that they were a pair of LVCs in a size 30 x 34, based on a 1878 model.  With white line selvedge, a single back pocket, frogmouth pockets, cinch back, and no belt loops or suspenders, they were quite an oddity.  Intrigued, I put them on and was surprised to find out that they fit me well!  They were pretty slim in my thigh with straight lower leg, ending with a leg opening of 8″.  Pretty comparable to my Banana Republic chinos.   By talking with Rob, I learned that he got these jeans (as well as some RRL chinos) from a guy who used to work at RRL.  These jeans were probably never worn, but they did have some staining on the inside of the leg.  For $95 before tax, I bought them! 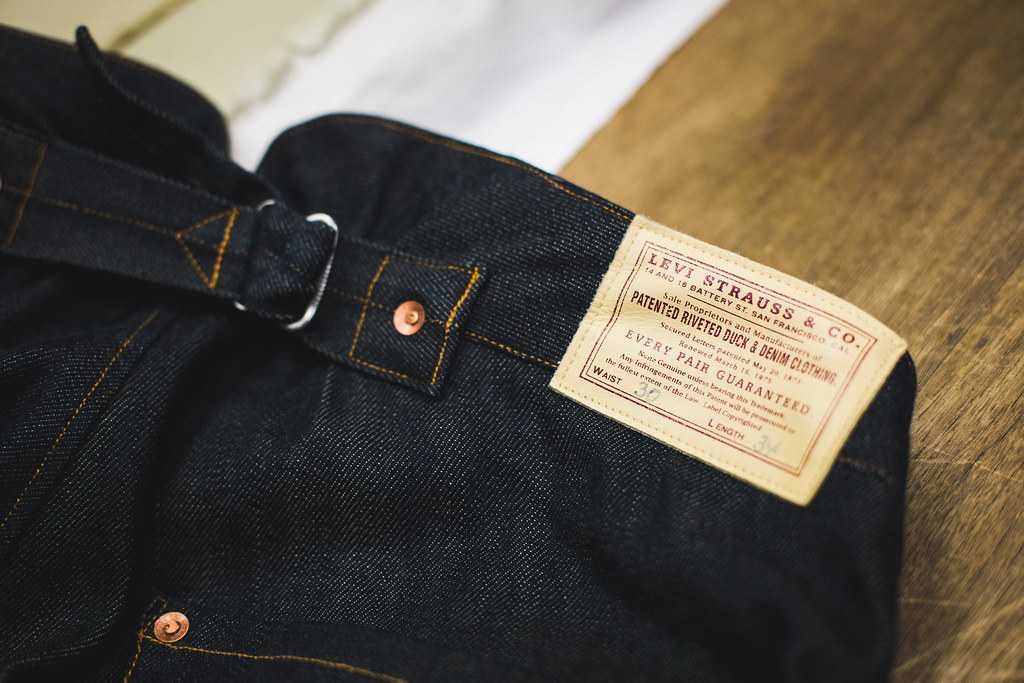 As I said earlier, I’m no denim head.  Hell I don’t know too much about fabrics or construction (my knowledge is mainly in styling and other details)! After talking with Rob and doing a little bit of research, I learned that these were the LVC 1878 “Pantaloons” (which refers to tight fitting trousers) which are no longer made.   If you want more info, Complex had a short paragraph about them but you can also look at UnionMade and Heddles.  It’s funny; all of these say straight fit but they were quite snug.  It might be due to my massive thighs. 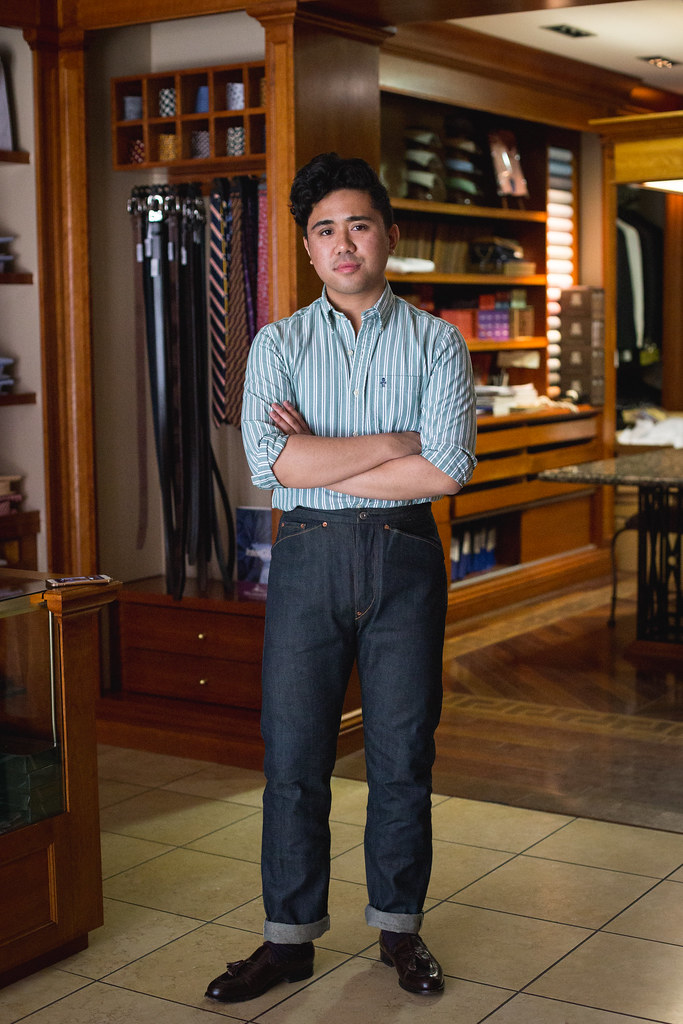 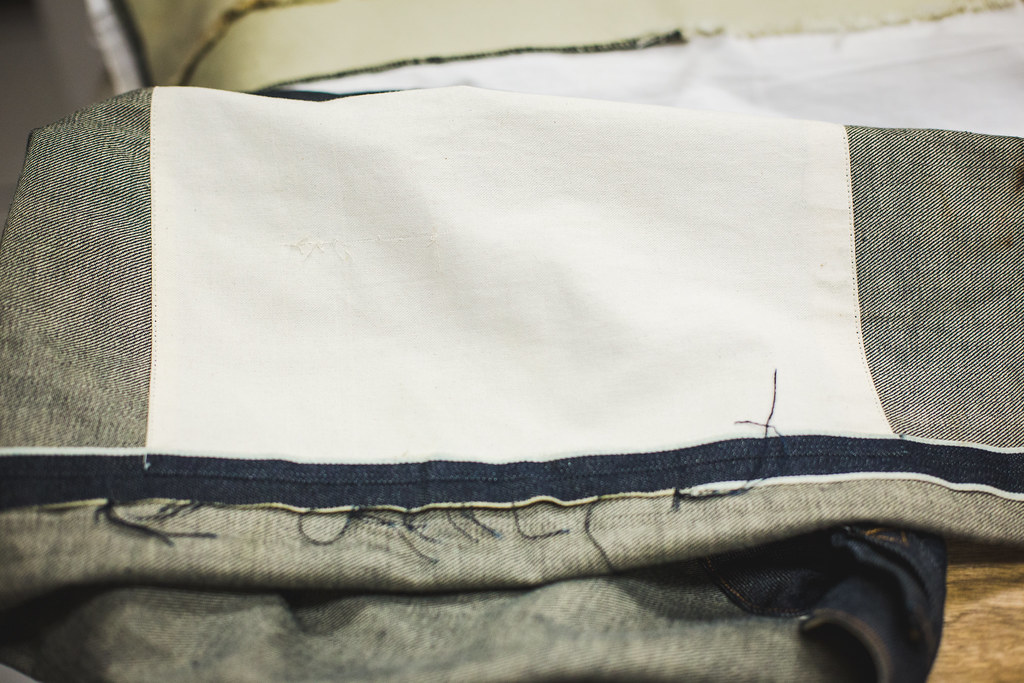 Frayed threads on the white-line selvedge and the reinforced knees.

I was pretty happy with this purchase, but some people said I overpaid since the quality of the LVC 1878 wasn’t good, according to other people on the internet.  On forums like Denim Bro, multiple owners say that the selvedge starts to fray which is made worse if you wash it.  The thread also state that the buckle is poor quality and will also be damaged in the washing machine.  There’s no label that says shrink-to-fit like the 501CT, but the websites that sell the 1878s do have a provision for how it will shrink (usually 1-1.5 sizes) if soaked; they also will gain weight, changing from 9oz-12oz (I think).   Out of sheer laziness, I’m probably not going to wash these jeans and will clean them using the “freezer” method.  They fit pretty well for now and I like the cuff it makes (especially if you go for the  wide workwear cuff).  I don’t want to mess it up! 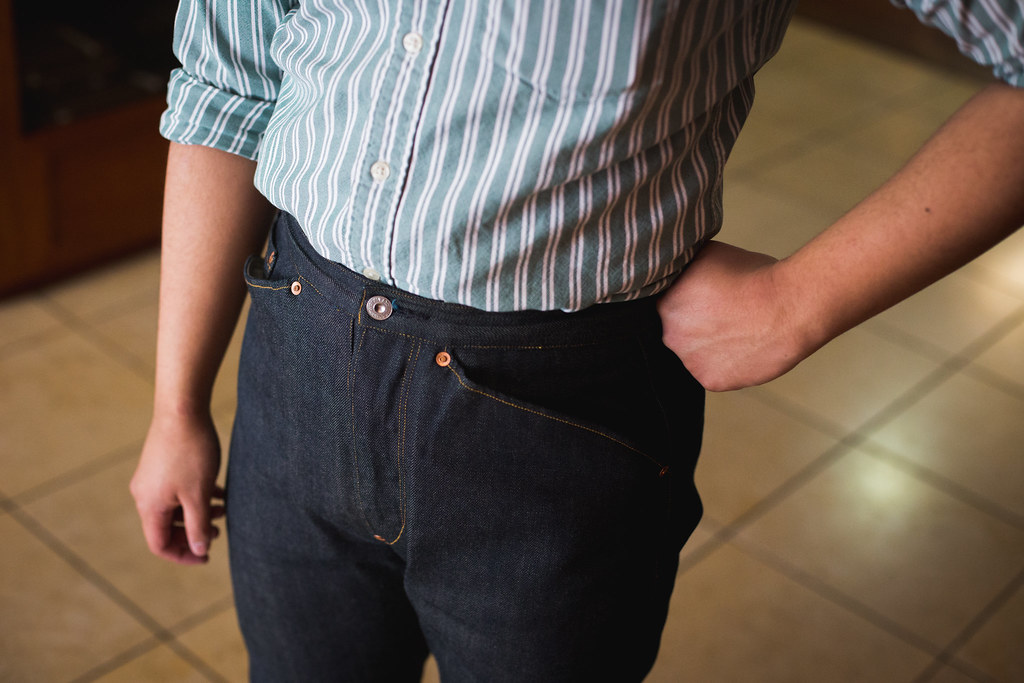 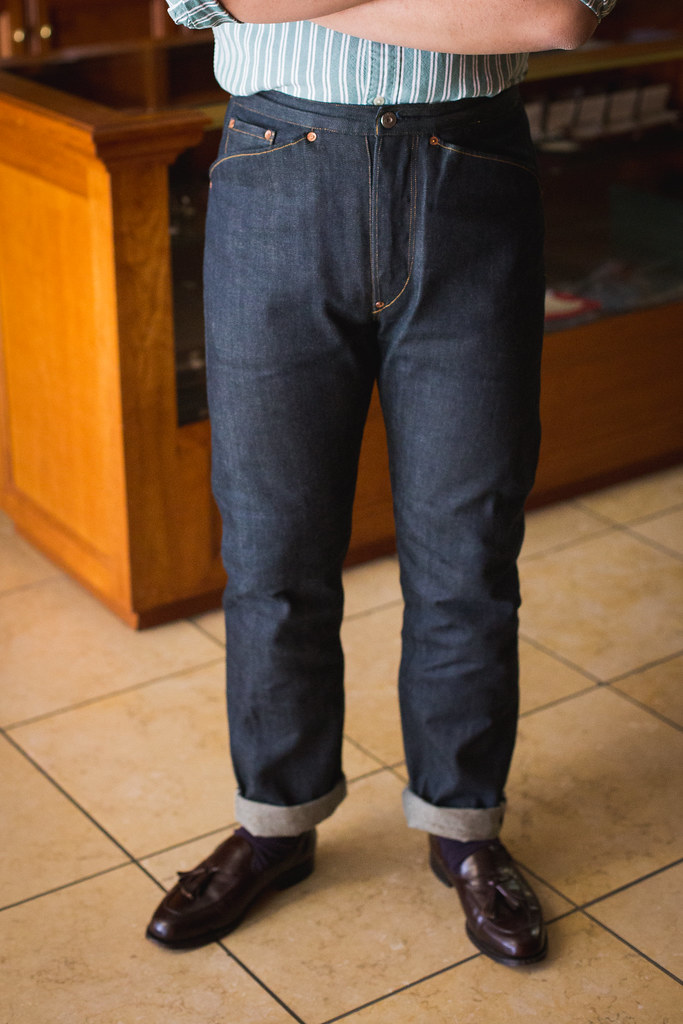 Pretty snug on the thighs, as I keep stating. 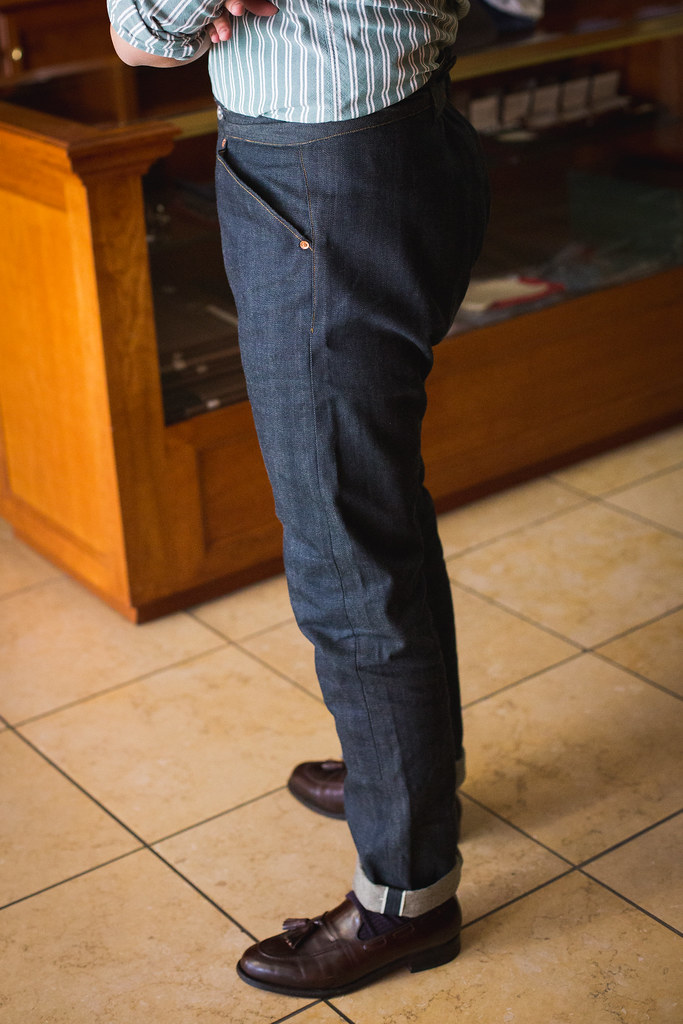 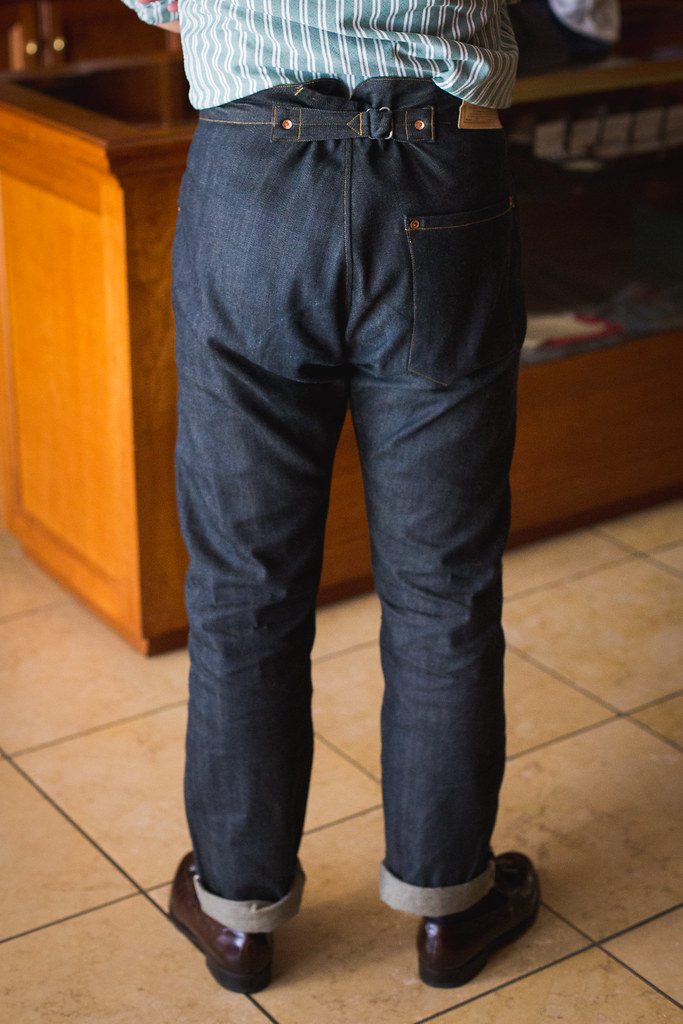 Tightened it all the way, just to make sure they don’t slide down.  Maybe th

While I do like the 501CTs, which have softened up over time and has pretty much conformed to my legs, these ones show promise.  The lack of belt loops make the jeans (or pantaloons) streamlined, which is perfect when paired with tailoring! The cinch-back reminds me of side tab adjusters and the rise (11″) isn’t bad but high enough to fit in with my other trousers. 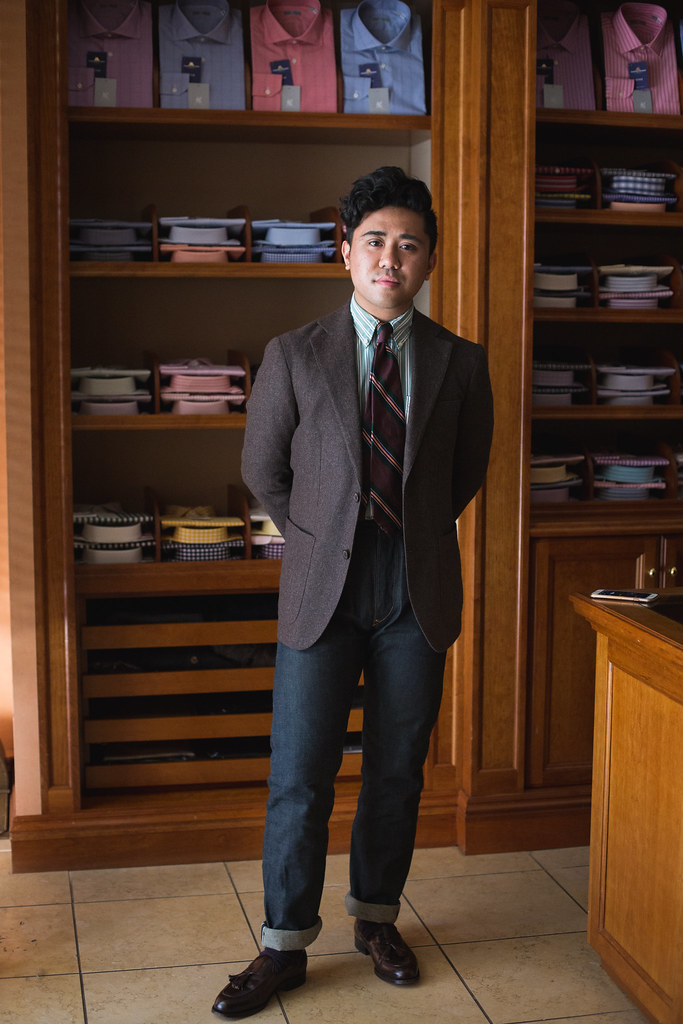 My first attempt with wearing the jeans really just echoes what Drake’s seems to prefer: slight ivy style utilizing earth tones, striped ties, oxford shirts, and denim. It’s nothing too crazy as it really is their uniform of sorts.  The entire palette might be a bit too “fall” for the month that this article was written (May), but it’s been less than 70F for as long as I can remember.  As a result, this combination of brown flannel jacket, oxford shirt, and sturdy denim definitely works for the gloomy weather that SoCal has been experiencing. 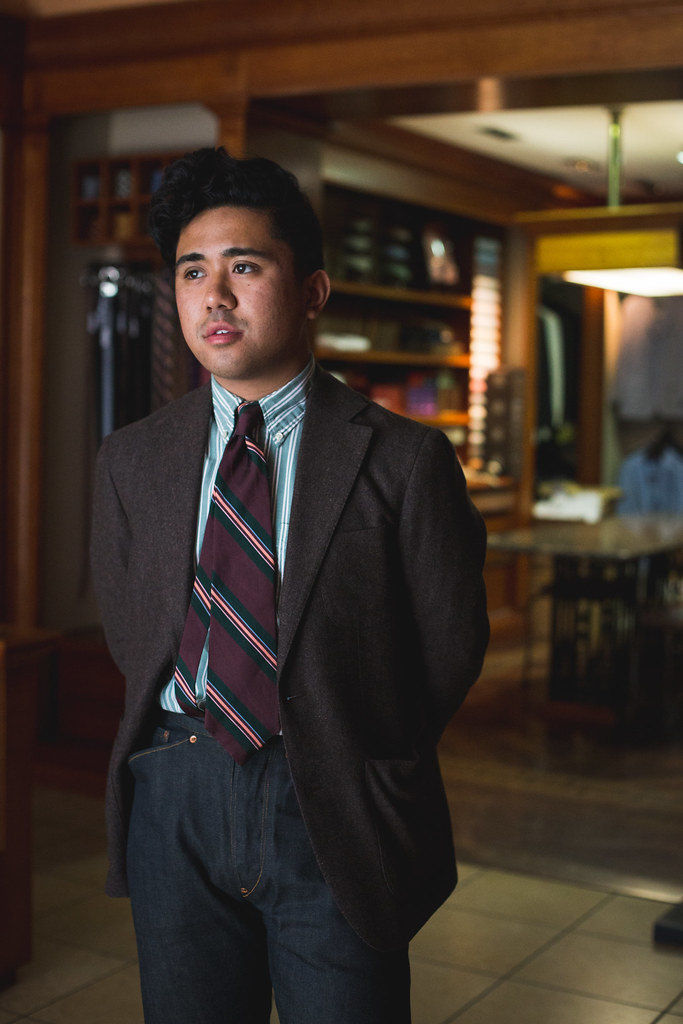 Since there aren’t any fussy belt loops, the jeans look very “clean” in this outfit.  It’s like a denim, non-pleated version of my Indochino or Vulture Suit trousers. You can see that the rise isn’t as high as my other trousers (or the 501Cts), but they’re still better than most jeans out there with this same slim fit!  Obviously, most wide cut jeans will have a high rise,  but I don’t think that those jeans tend to work with tailoring (unless it is also workwear focused). 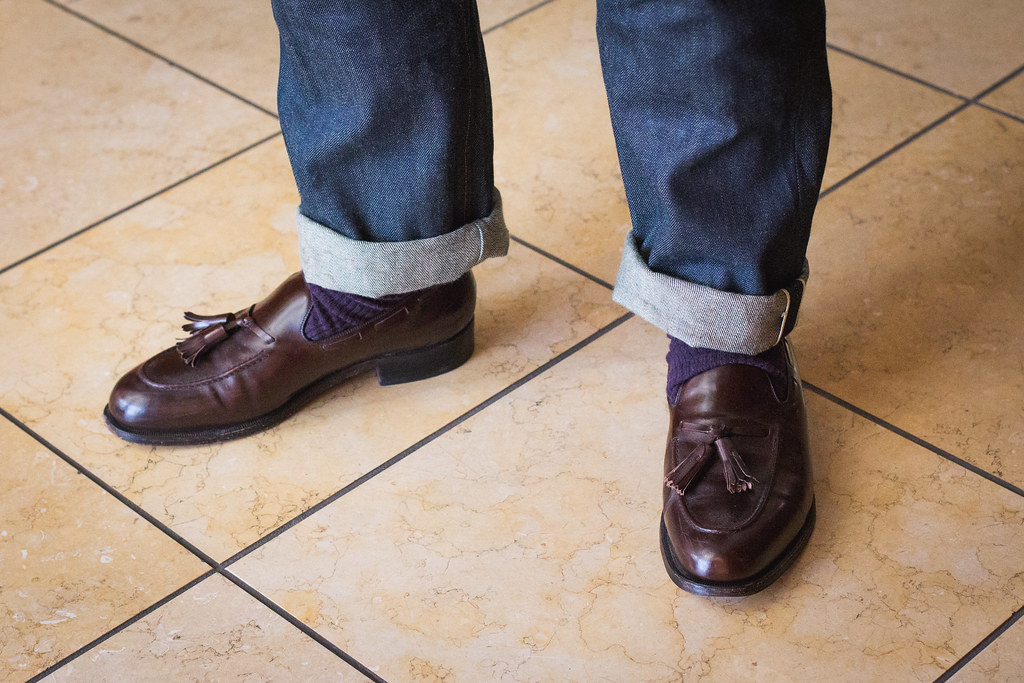 I will say that the length will take some getting used to.  Since these are a 34 length and I’m about a 29.5, I have to roll the cuff four times in order to get it to end correctly.  In the end, it makes the cuff a little too bulky.  However, I’m going to keep this length since I want to ability to make a wider cuff for workwear outfits and I might soak them in the future.

Also I stole the denim + purple socks + tassel loafers combo from Drake’s.  So sue me! 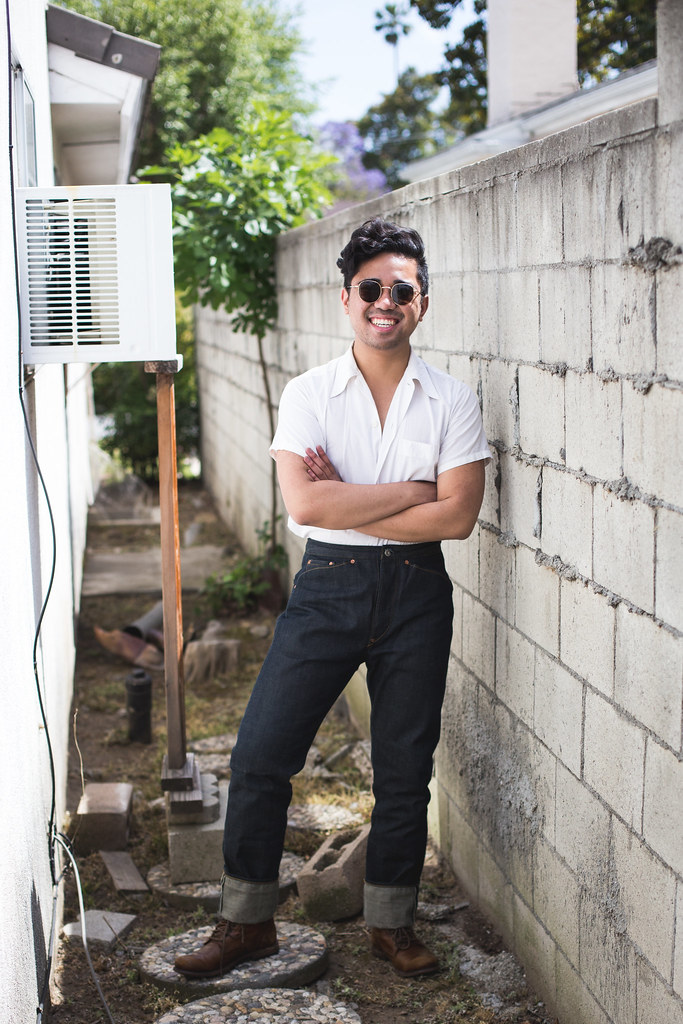 Next, I thought I’d try and bring the LVC 1878’s into their intended arena: workwear. I talked to a few people and they said that they would wear these types of jeans with a henley or tee, chore coat, and a ball cap.  Even though it’s a good look, I decided against something super workwear and instead went for a more 1940s-1950’s feel by donning a simple white loop collar (camp collar) shirt.  You can see the “streamlined” effect in action thanks to the lack of belt! I kept the cuff high and wore some boots to make the outfit more in-line with “vintage casual”.

I just want to take a moment and give some praise to the loop/camp collar shirt. It’s such a great detail to have since you can’t really find this type of shirt unless it’s an aloha shirt. You could theoretically get similar outfit vibes with regular casual shirts, band collars, or button-down collars, but the throwback style of the loop/camp collar reigns supreme for me.   The one here is from the 1940’s, due to the angle and width of the collar; ones from the 1950s’/1960’s are smaller and less curved.  Getting ones in white, light blue, or pale yellow is the best way to start and they’ll go perfectly with your high rise denim!   Perhaps later on, I’ll do a post on how to wear them with tailoring, but I’m pretty sure it’ll be the same as the “casually tailored” outfit from this post. 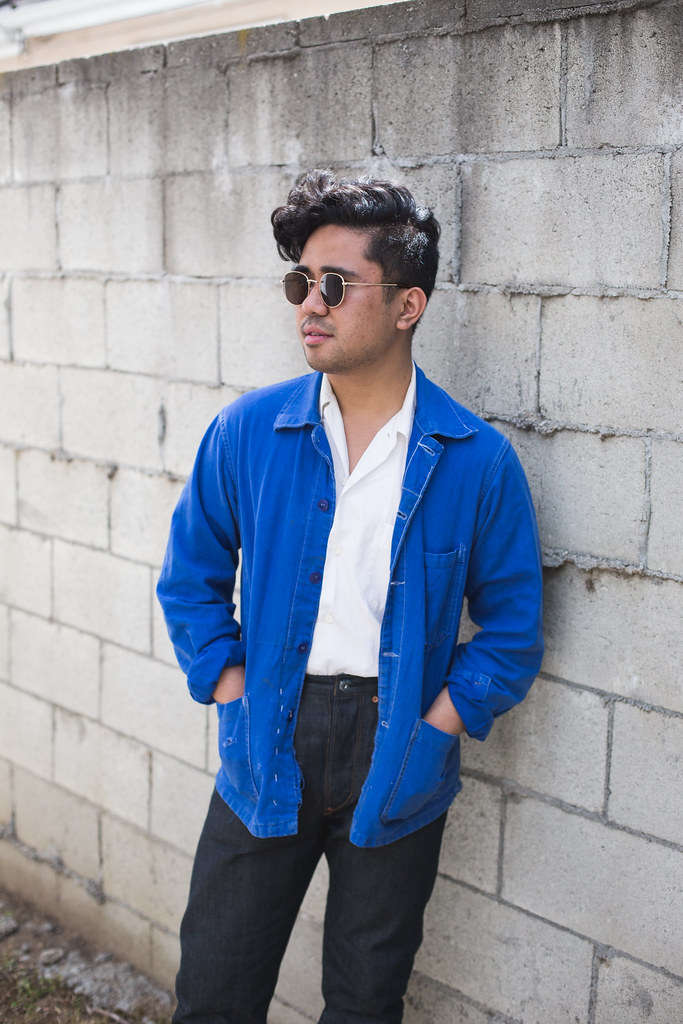 I needed a light layering piece and while I could have gone with the gab short jacket for a more 1940’s/50’s look, I decided to keep it going with my trusty chore coat.  The use of this workwear garment over the gab jacket, makes this a more “artistic” outfit rather than a youth one.  Funnily enough, I’m writing this article just after having come across Derek’s latest post, where the outfits are very similar! Great minds, right? 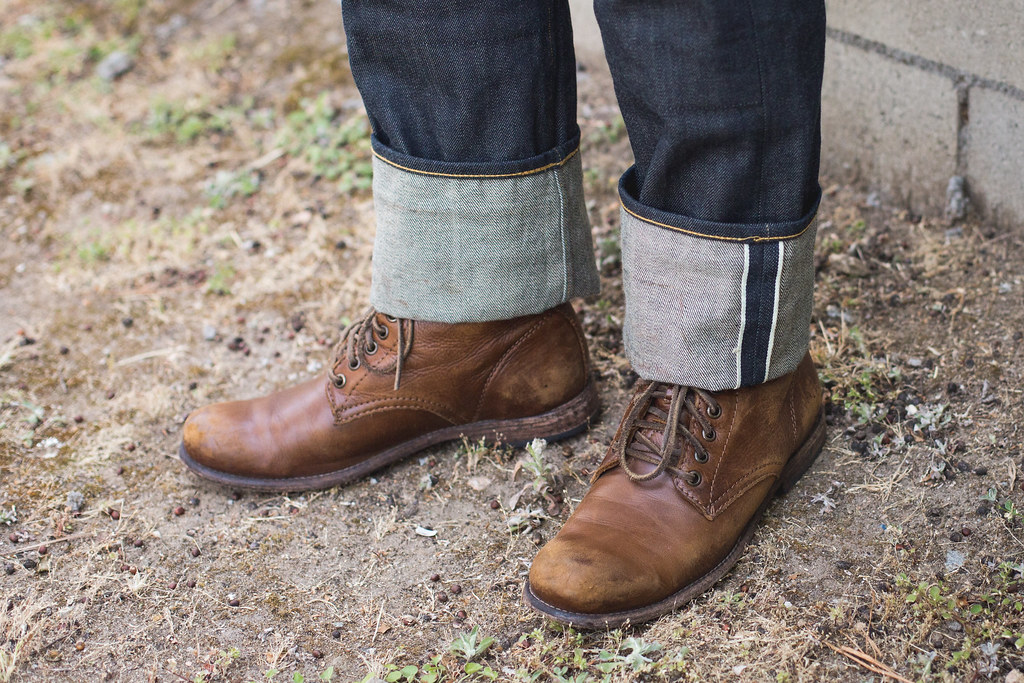 LVC is badass, especially if you want to have a pair of high-rise jeans.  Even though these 1878’s are the only pair I’ve owned myself, I’ve seen them in action (1933 on Spencer) and have tried some of them on before!  I’m not a denim head and I know next to nothing on denim brands, but these are incredibly cool and contain some great details (as well as being high rise) that you can’t find anywhere else.   If you do decide to get some, try not think of them as a one-trick pony; they are just as versatile is the other garments we’ve talked about on this blog.  The LVC 1878’s are no exception.

Obviously, I’m definitely going to keep wearing these LVC 1878’s and will definitely try to keep you guys updated as they break in and soften up.  As stated before, I probably won’t soak them since the thighs are incredibly snug the way they are.  Even though they’re vintage with some crazy vintage details, you can .  Sure, these jeans may be way different than what you’ve seen before (due to their a cinch-back and lack of belt loops), but they can still function like a great pair of jeans! The LVC 1878’s are slim fit and sit comfortably at a slightly high rise.  Their streamlined nature allows them to be worn with tailoring fairly easily, as long as you have some texture to work with the denim.  As you can see above, I wore mine with a flannel sportcoat.

They also work well with casual style, whether you want something “vintage casual” or workwear! I would definitely wear a tucked-in tee with these, but I decided to break-out the seldom seen loop/camp collar sportshirts that you see on teenagers in the 1940s/50s.

Just remember: even though things are vintage or have vintage details, you can always wear them in your own way to get the most out of each wear! I may have a lot of clothes, but many of the garments I own ( like the chore coat or the gab short jacket) are able to be worn with both sartorial and casual styles! Don’t feel boxed into having a completely sartorial or completely vintage wardrobe.  If you like both, you can definitely do both!  I’m here to help you do that.