It seems that most of the vintage posts on this blog seem to revolve around backyard sales and Dapper Day and I really aim to change that.  There’s an entire community that revolves around vintage and its pretty fun to be apart of! This article covers the style at Paper Moon Vintage (the first vintage store I ever went to) and their Tiki-Hawaiian party!

Each full moon, Paper Moon Vintage hosts a party to celebrate, usually with a theme!  I haven’t really gone to one in a while, but I know for sure that the previous event centered around westernwear. It’s really a great piece of the small vintage LA scene that highlights the niche community as well as the versatility of clothing and music that define this group.

Hawaii has long occupied a special place in the American mythos. It’s reputation as a exotic, carefree island paradise began before the turn of the century, and has since influenced mainstream American culture in countless ways. In the 1920s, ukuleles were featured in jazz bands everywhere, and decades later, musicians like Martin Denny and Arthur Lyman took cues from traditional Polynesian rhythms. “Hawaiian” cuisine (in reality, Chinese food) was brought to Hollywood with the opening of Don the Beachcomber in 1933- but the restaurant’s real contribution were the cocktails they served: drinks like the Zombie or the Mai Tai were an important part of Tiki Culture for decades and continue to be popular today.

After World War Two, James A. Michener published Tales of the South Pacific which soon became a best seller, and later was adapted into a musical by Rogers and Hammerstein. The Hawaiian tourism industry exploded, and even Americans who could not afford the flight held luaus in their backyards. And of course, there’s the island’s influence on fashion: since the 1940s, Hawaiian shirts  (and by extension Tiki themed shirts) became, and continue to be a staple of men’s casual wardrobes.

Hawaii was a popular vacation spot in the 1930s, for those rich enough to weather the Great Depression.

Worn tucked in or tucked out, they’re a great summer look.  Now we’ve obviously talked about the Aloha shirt before and how they work well with tailored trousers, but I really want to emphasize that they look great with full suits as well! It’s something extremely casual but I think it makes for a fun, interesting outfit that you can use your personal preference to change up as you wish. As you can see, light colored suits are best, but dark suits can give it a pseudo 90’s/SLP vibe as well. Putting these distinct inspirations together helped Spencer and I create our outfits for the event! 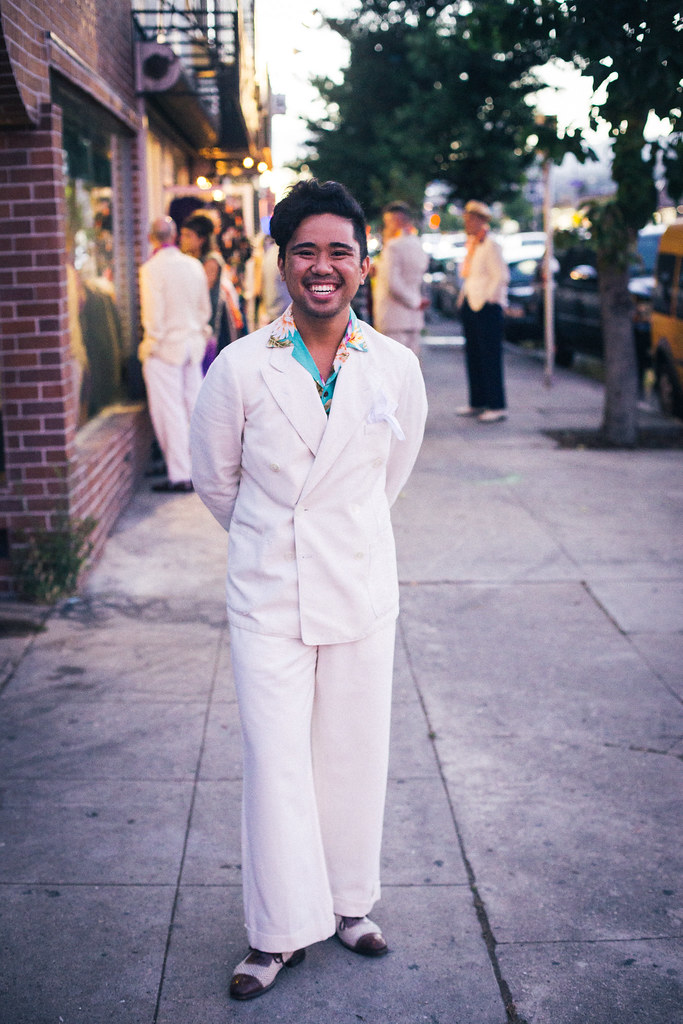 When you’re going for tropical 1930’s suiting, you’ve got to go with Palm Beach.  As I’ve said many times before , this suit is special to me for a few reasons.  Number one: it’s a dope white double breasted suit. Number two: the fabric doesn’t exist.  While it’s tightly woven like gaberdine , the fabric is a mix of linen, wool, and mohair that makes it perfect for warm climates; it also drapes amazingly.  All of these qualities make Palm Beach suits the choice for vintage summer suiting.  It also is a way for you to show off to the other vintage people, since it is pretty rare. 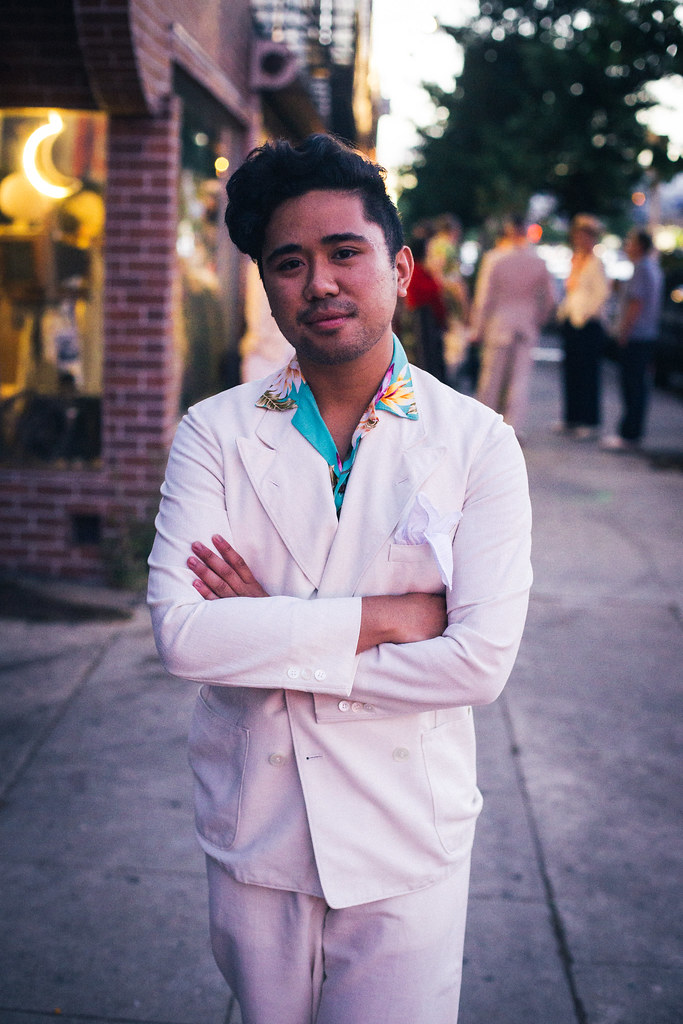 While I could have gone with a tropical motif by wearing a vintage floral tie, I decided to keep things “sartorial casual” by wearing my aloha shirt.  It’s not exactly out of place, since we’ve seen guys do it before (especially now) but it’s something a little different than what most guys would wear to a Hawaiian party. I will say that my shirt is from the contemporary company Two Palms and is  not a true vintage shirt despite the collar and fantastic design.  True vintage loop collars will be larger and a bit more curved (like a spearpoint) as you will see later on in this post.

Amazingly, Spencer was the only one who made Miami Vice reference. Either way I think this was a solid look! 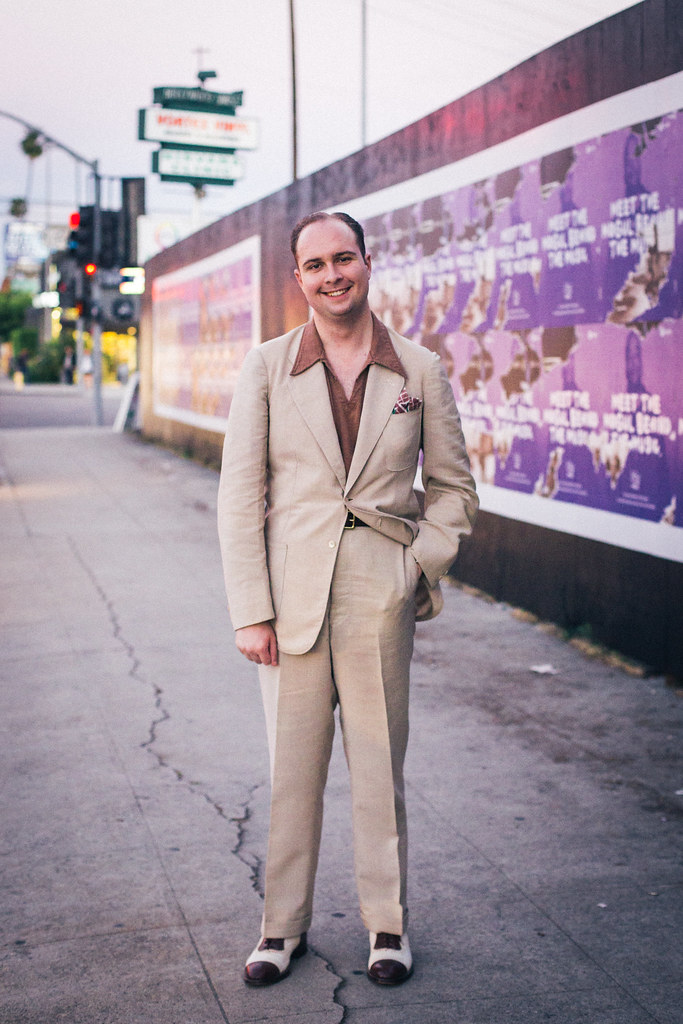 Spencer was a doofus; he didn’t even have a contemporary aloha shirt to wear! However, he still got in the spirit with a truer version of 1930’s sartorial casual by wearing his 1930’s polo (made by SJC) with this super rare early 1930’s Palm Beach suit. Just look at that beast of a suit; perfect lapels, button stance, and patch pockets. Like my suit, it’s completely unstructured, making it one of the best things to wear for the LA summer.  I like how he echoes the brown polo shirt with his pocket square and true vintage spectator shoes.  It’s what I imagine a 1930’s man vacationing in Cuba would wear! 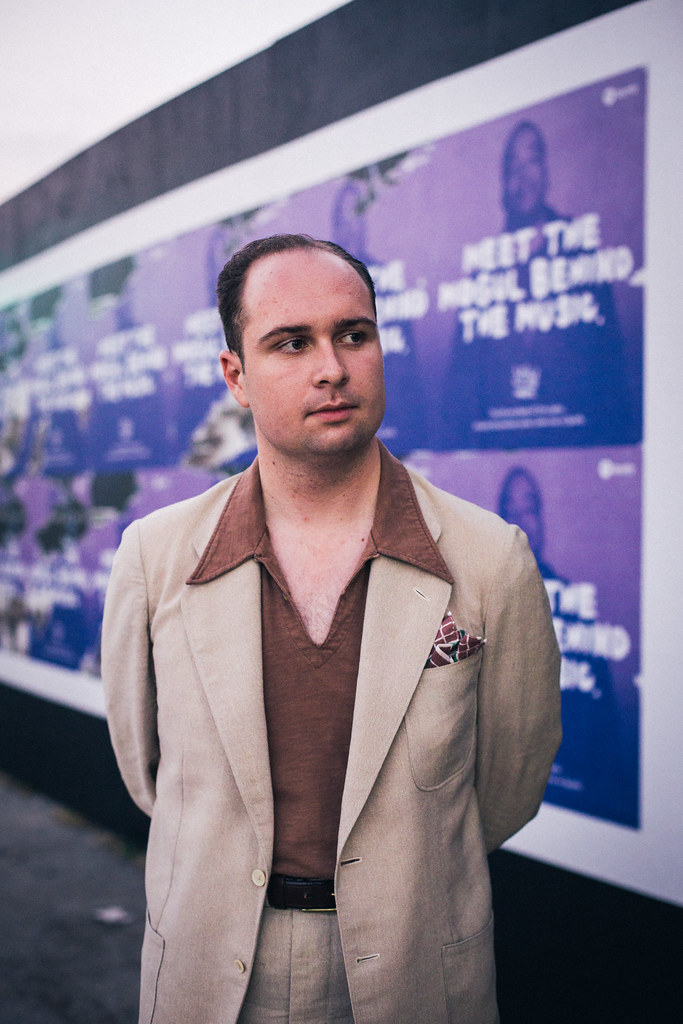 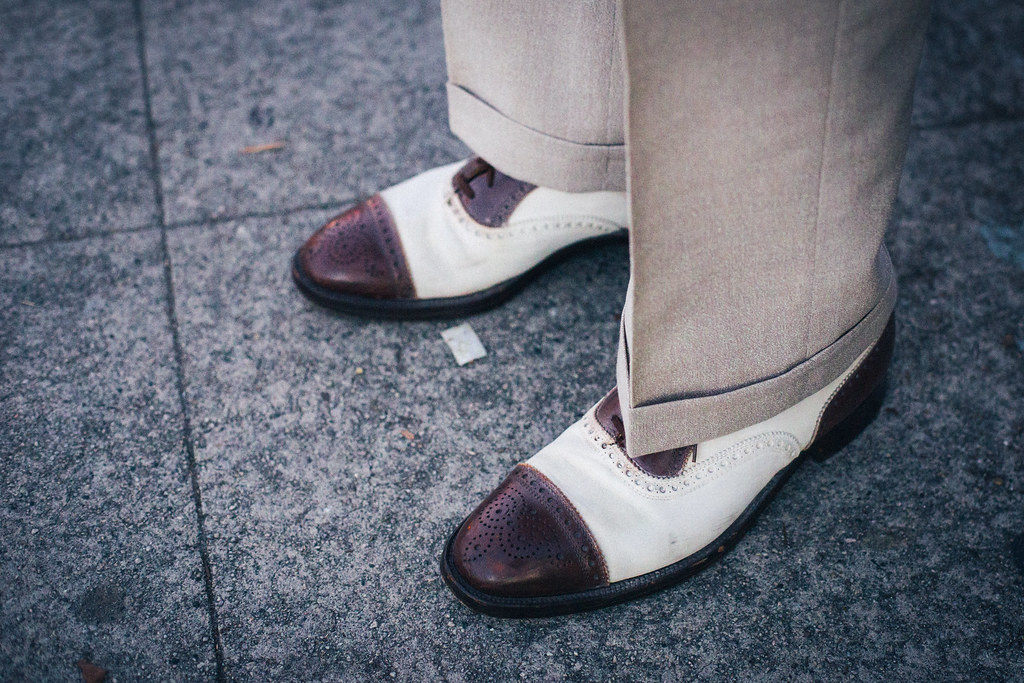 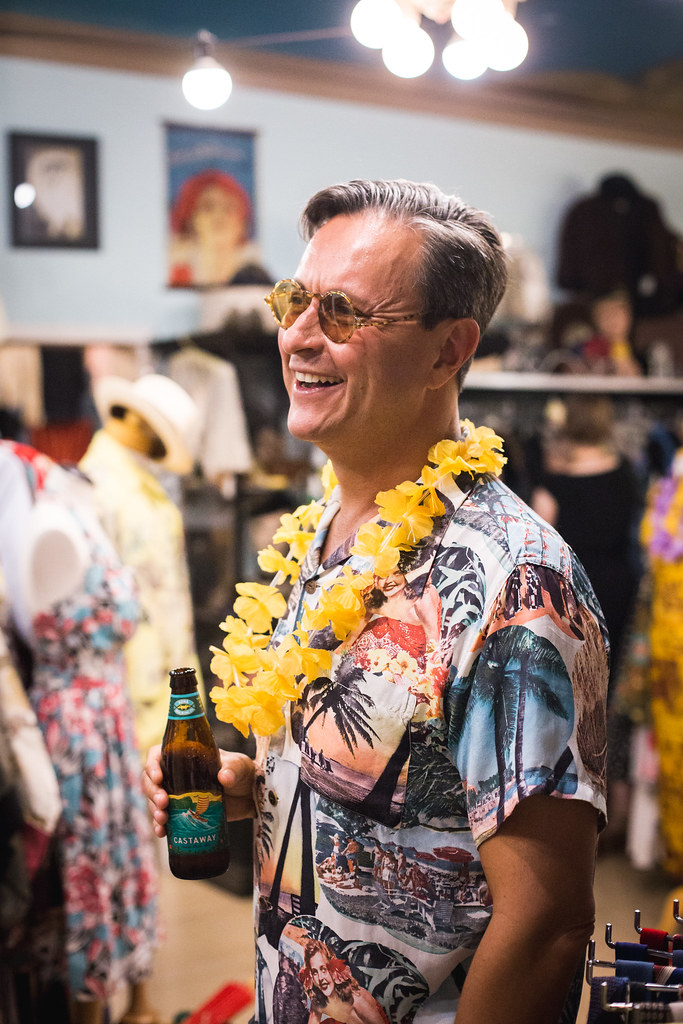 This is the first time Marc Chevalier has been featured on this blog, which is a travesty considering that he is one of the most knowledgeable men in the vintage scene.  Some of the detailed stuff we include come straight from Marc!  For the party, went for a typical ’40s/’50s look by pairing his vintage Aloha shirt with some brown gaberdine slacks.  Although he wore a relatively simple outfit, the devil is in the details. Today, most Hawaiian shirts with designs other than tropical flora tend to be cluttered and tacky. His early 40’s example here, manages to avoid those trappings while still remaining visually distinct and eye-catching. 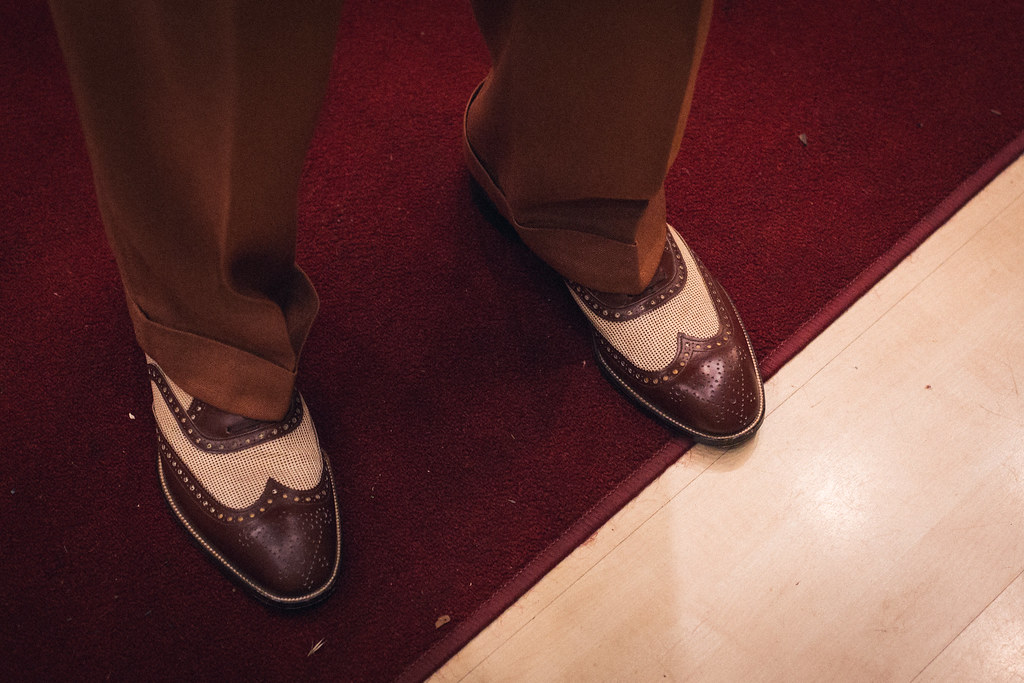 His late ’40s pants are a blend of linen and rayon, perfect for a summer night in Hollywood, or the tropical beaches of Oahu. He ties it all together with amazing calfskin perforated wingtip spectators, and a pair of early ’40s tortoiseshell sunglasses. Expect to see more of Marc here in the future! 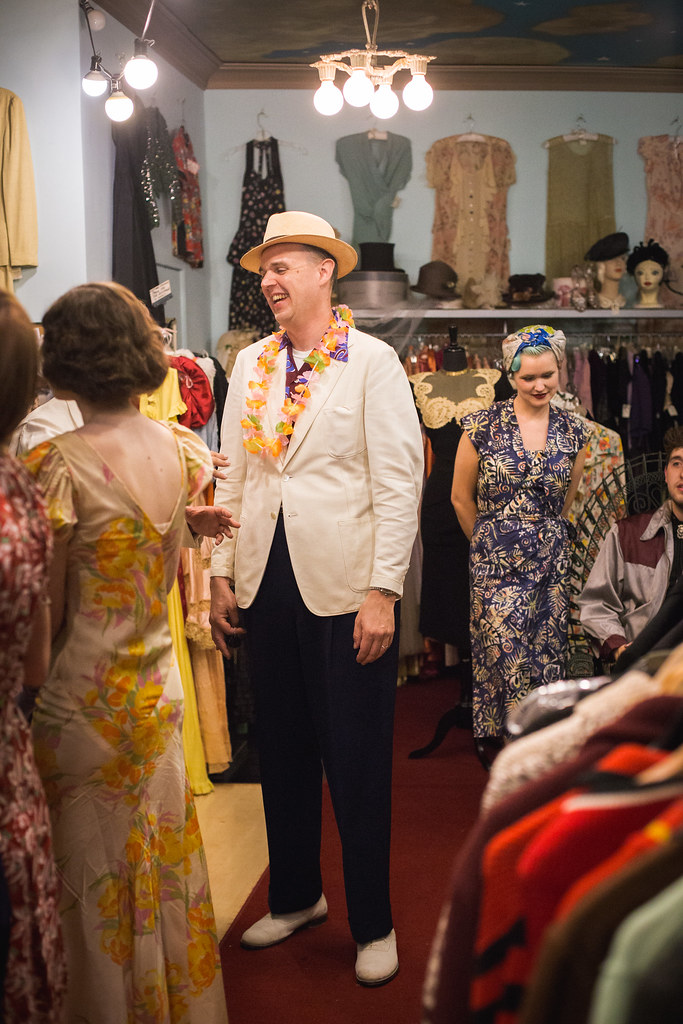 Having just returned from a Hawaiian vacation himself, this party must have seemed familiar! Rob brought his A-game by wearing a white Palm Beach patch pocket jacket with navy blue trousers; the tame, yet bright summer ensemble lets his red-blue Aloha shirt be the star of the outfit.  Bonus points for the optimo Panama Hat! 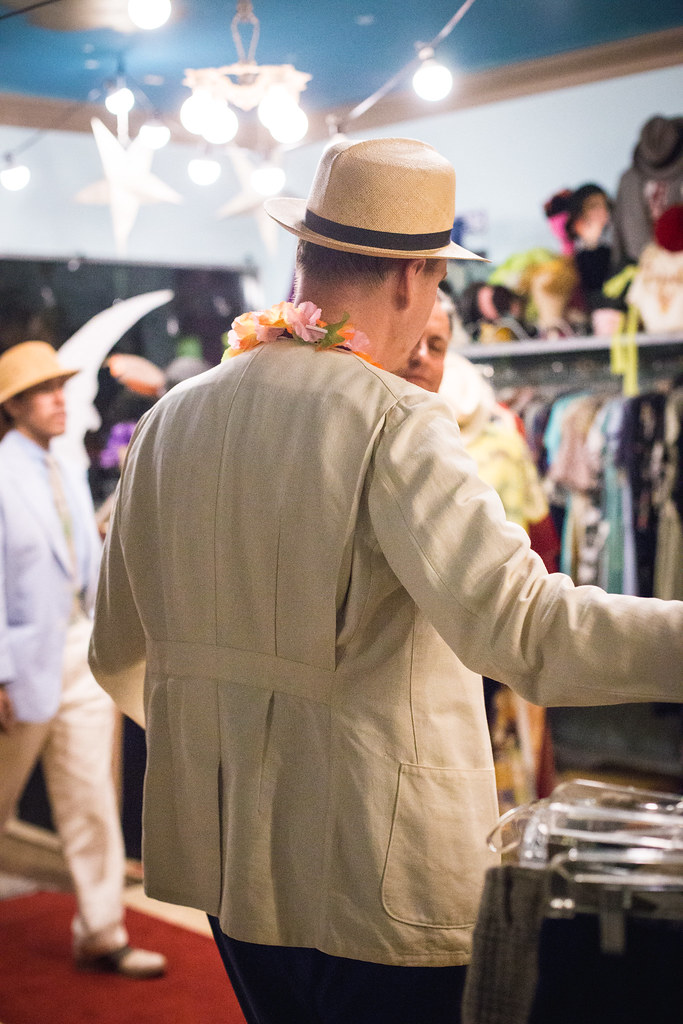 Belt backs are just super cool since no one makes them anymore (and if they do, it’s not like this).  While most belt backs add waist suppression, this particular jacket has a bi-swing (pleats in the back of the arm) and a center vent (most jackets lacked vents, unless they were for “sport”). 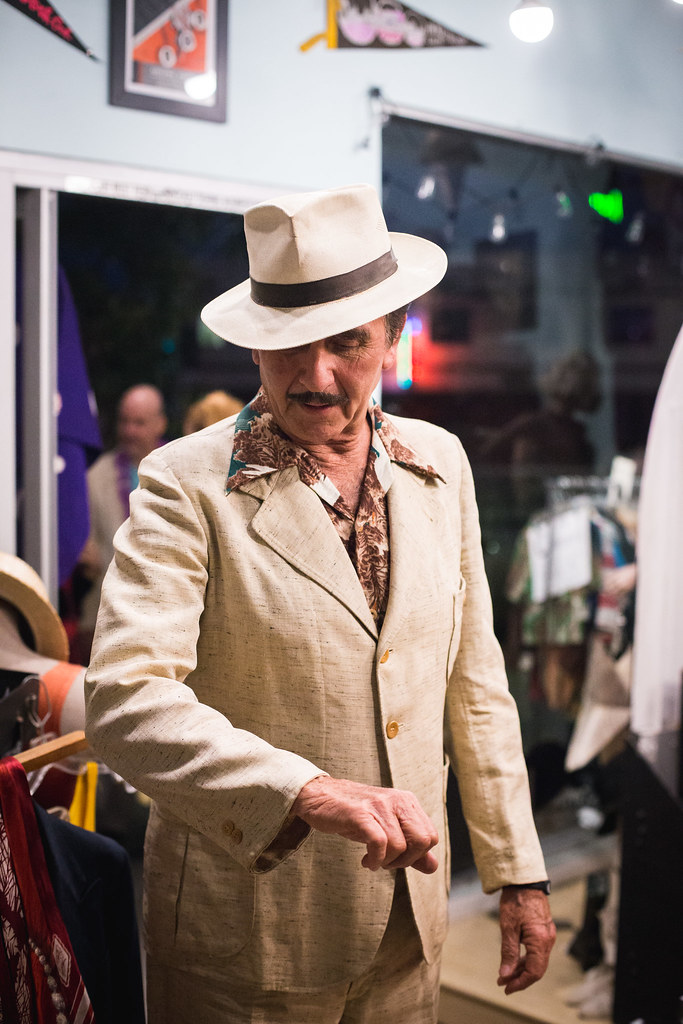 Steve echoes my look by wearing a vintage suit with a Hawaiian shirt!

Steve  showed everyone up in one of the most incredible vintage suits we had ever seen. A gorgeous example of 1930s German tailoring (yes, crazy we know), this suit had it all:  a completely unstructured jacket with a belt back and pleated buttoning patch pockets and trousers with side tab adjusters, extended tab closure, and pleats. The best part is that he got it all for only $250!  If it went on eBay today, you can bet that this could fetch almost $1k easy, due not only to the age and tailored details, but the awesomeness of the fabric alone: flecked cream linen.  This suit is one of the main reasons why I firmly believe that vintage clothing supersedes contemporary tailoring. No one does these details anymore! 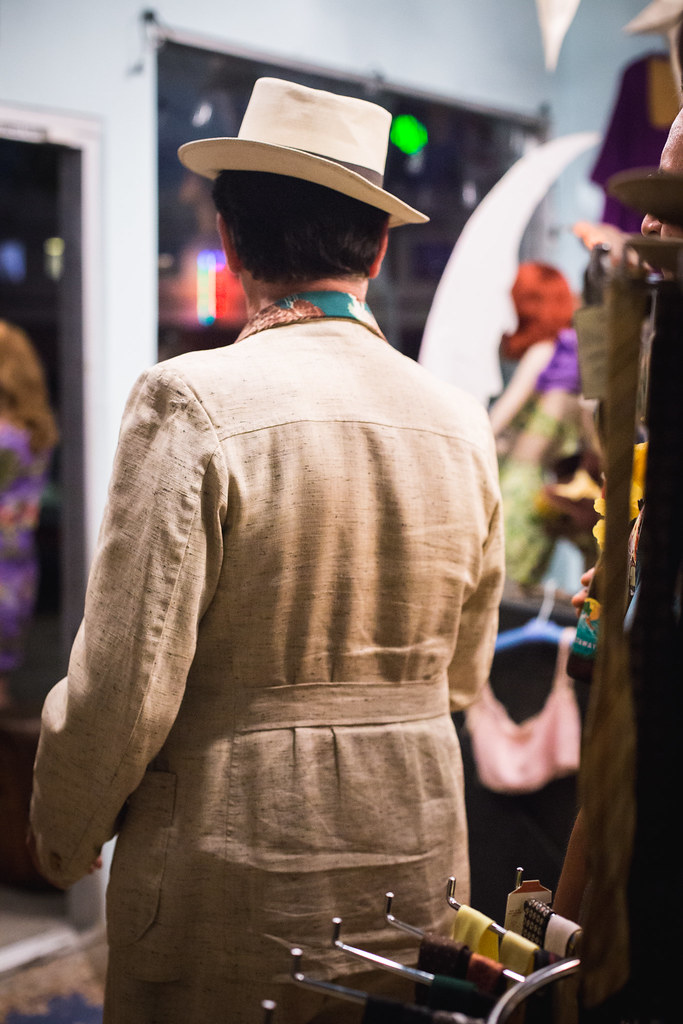 A half belt, to provide waist supresson. 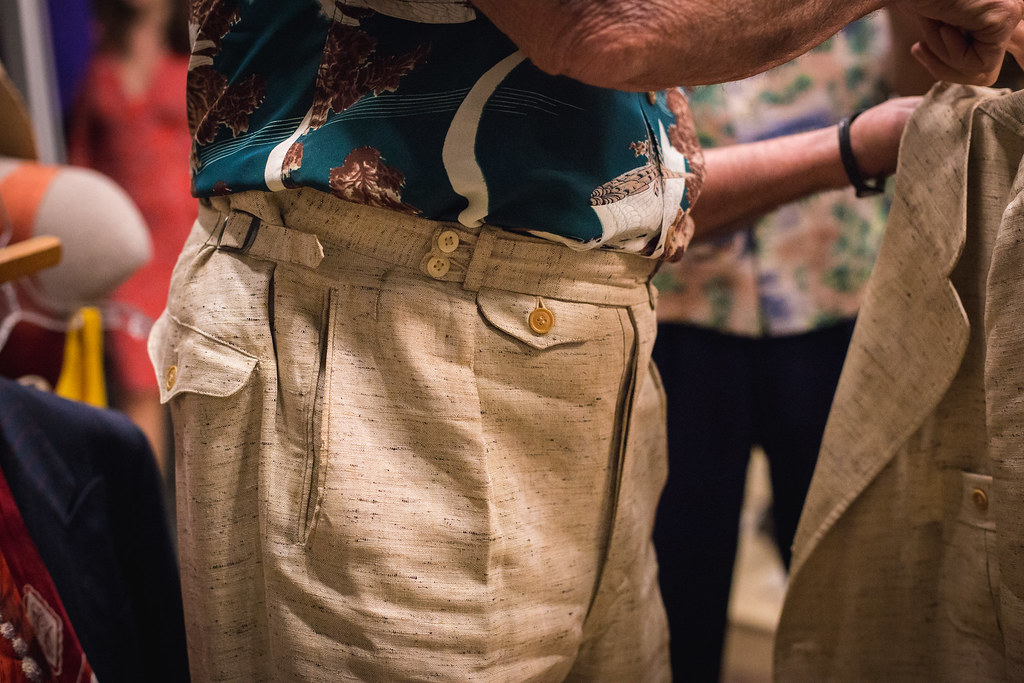 Trousers with all the details you can think of. 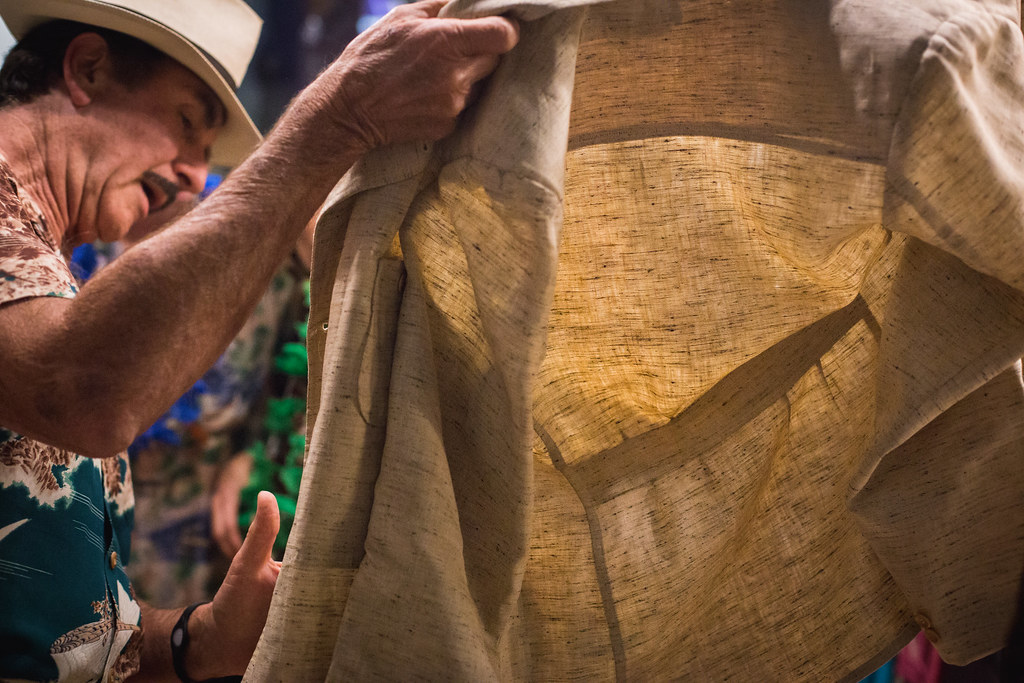 Unstructured and unlined, with an extremely lightweight fabric.  A Holy Grail if I ever saw one. 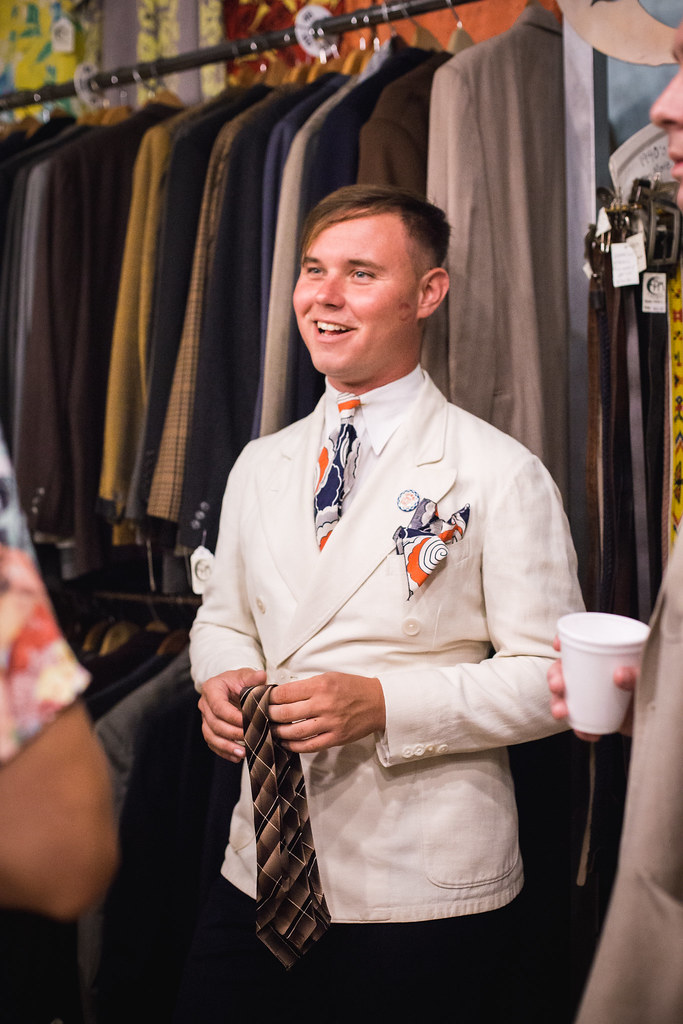 Kurt follows Rob’s lead by wearing another belt back Palm Beach jacket  (this time as a DB) with navy trousers. Instead of a wearing an aloha shirt, he goes in a sartorial direction, with a crazy bold 1940’s tie.  I can’t make out if it’s actually tropically themed, but it’s a fun tie that definitely fits in with the other bold outfits of the night! I’m always going to be enamored with the white jacket + blue pants + bold tie combo; I did it (sorta) when I got interviewed by Articles of Style! 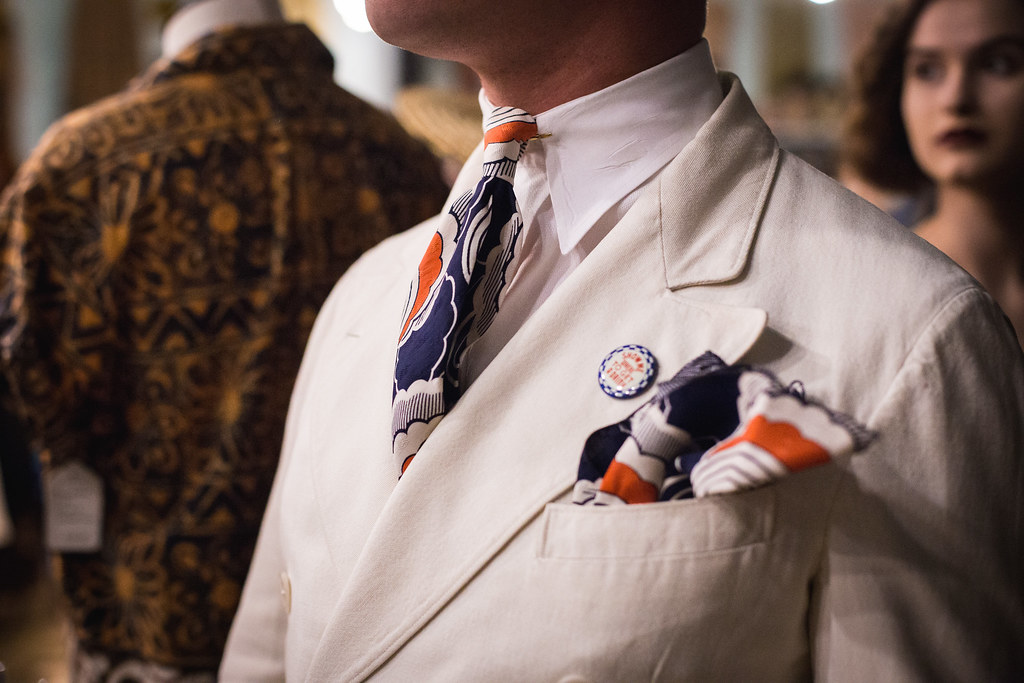 Normally, I’m completely against matching tie and pocket square combinations.  However, when it’s vintage, I think it works for this specific look.  I find it slightly charming on Kurt and it’s always cool to show off your rare pieces, as matching sets like this are incredibly hard to find.  Also, I’m not sure when you could ever wear that pocket square by its self! 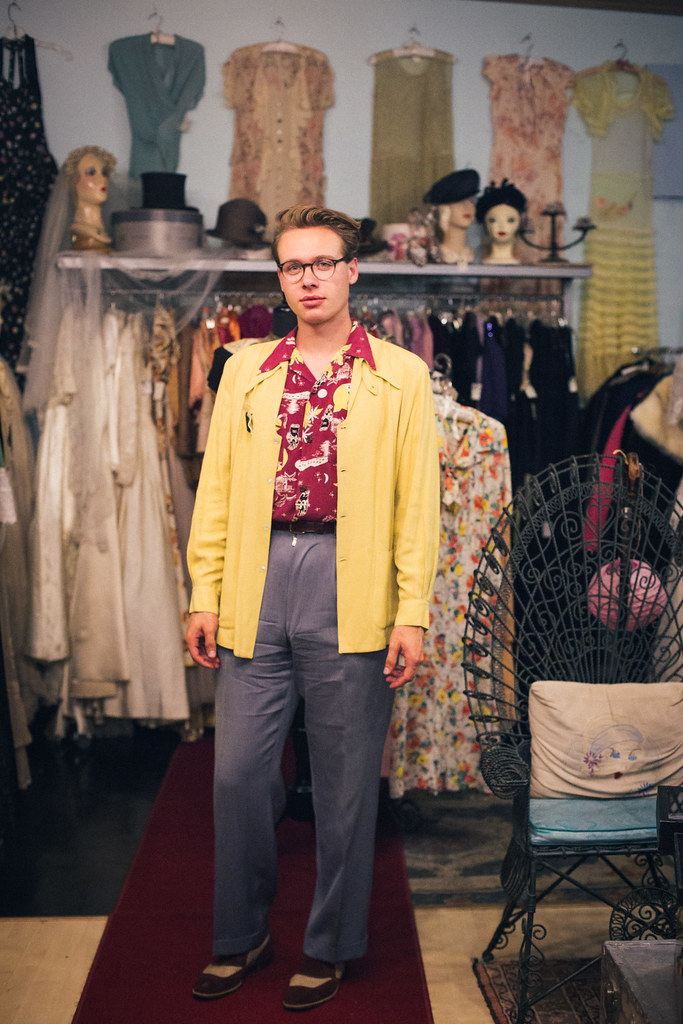 Christian also breaks out some rare-as-fuck pieces. At first glance it just looks like a red hawaiian shirt with grey trousers and a bold yellow jacket.  Actually, the red shirt has a very interesting print Hawaiian print (which always fetch hundreds on eBay) and the jacket is a 1940’s gab leisure piece, which is also exceedingly rare to find.  These jackets were all the rage amongst the youth of the 1940s and early 1950s, and have come to characterize a lot of the rockabilly scene today.  They definitely influenced the 1970’s leisure jackets that we’ve come to know, except the 1970’s versions were structured, heavily padded, and made of wool-poly blends.  Either way, the 1940’s leisure jacket is a cool item and Christian is proud to own one in such a rare, rakish color. His casual 1940’s look is certainly something different than what Spencer and I would wear.

Now please enjoy some shots I took of the party!  You’ll notice a variety of different styles present at the event especially since everyone got into the spirit.  Take note of the different varieties of collars.  1940’s ones will typically be much bigger and curved, echoing the spearpoint dress shirts, while 1950’s ones onward will be smaller, yet sharper and angular! 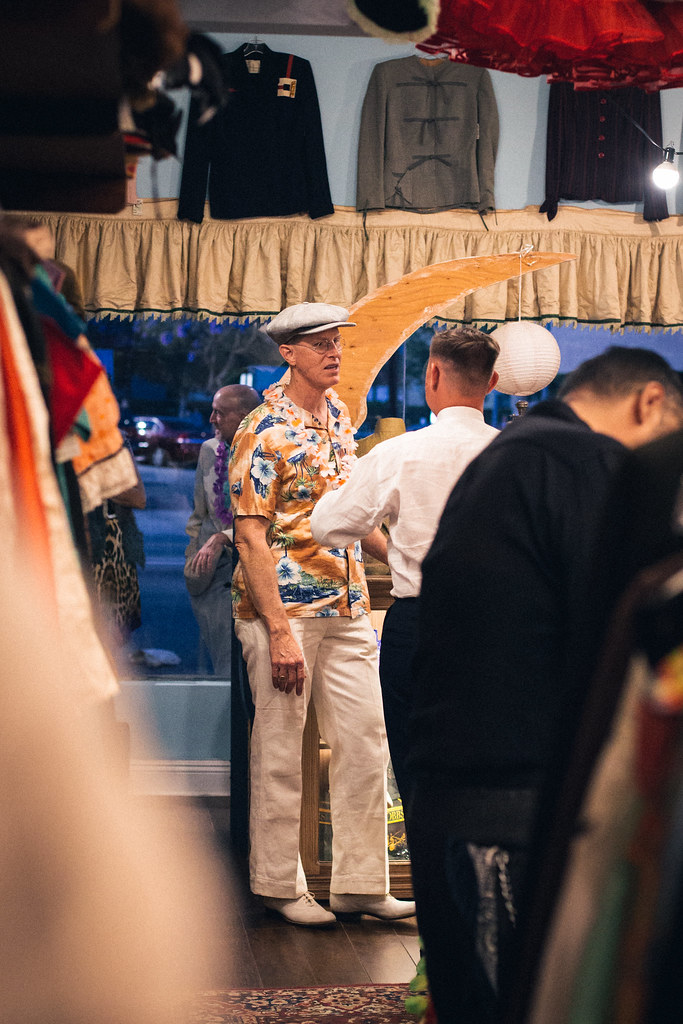 Cary in a smart look. Love the use of orange and white! 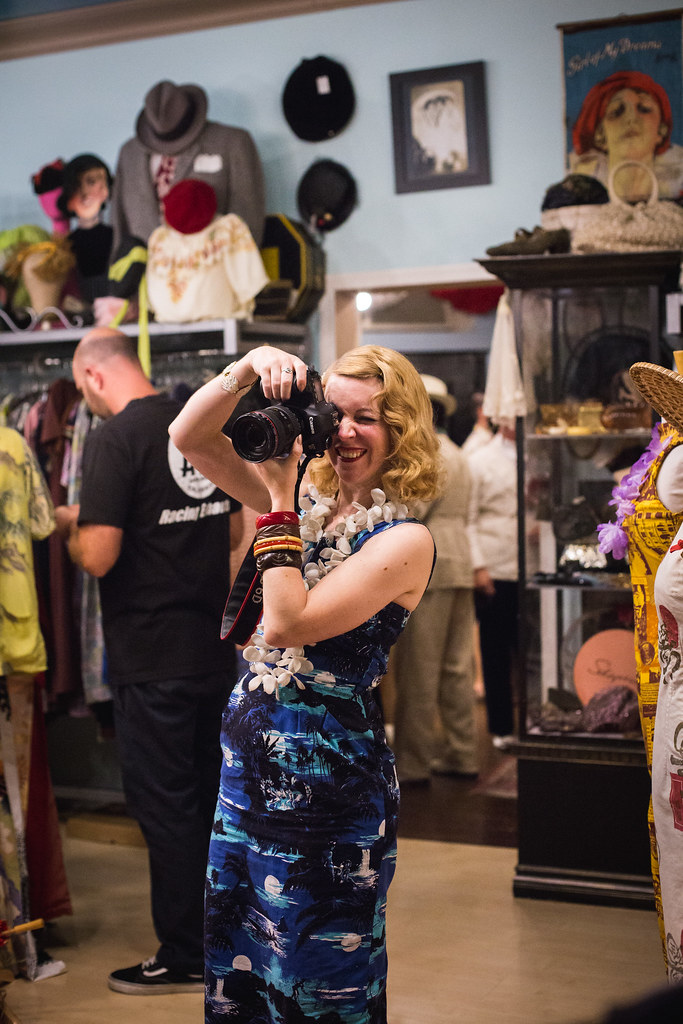 Shop owner Nicole, shooting some of her guests. 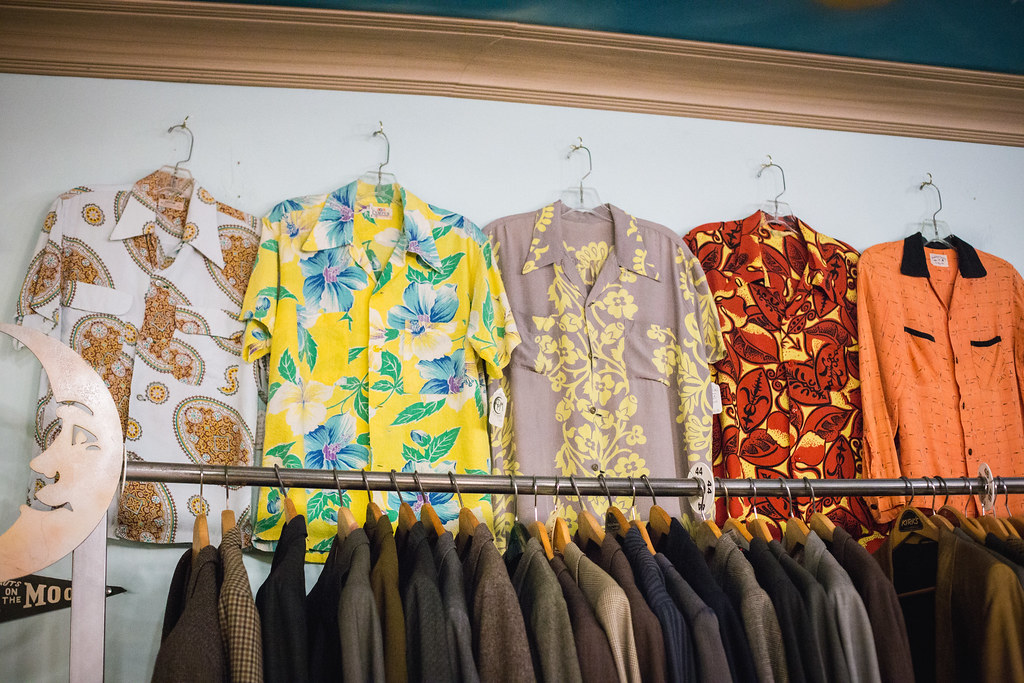 Awesome 1940s-1950s Aloha shirts! The yellow one is made of seersucker, making it (like many pieces in this post) a rarity.  Try and find something similar today. 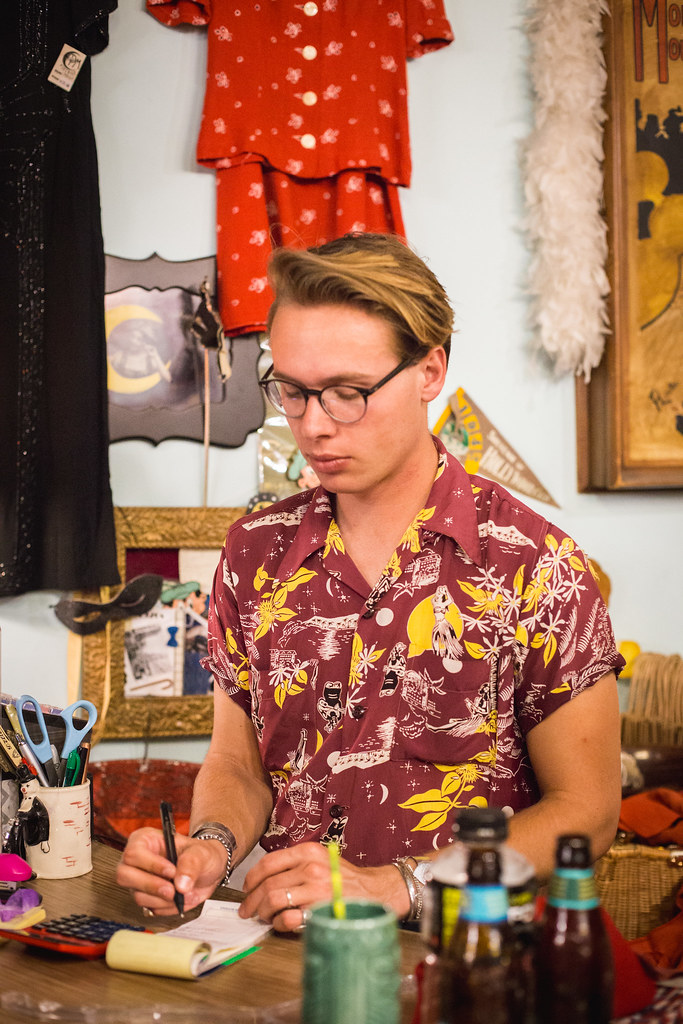 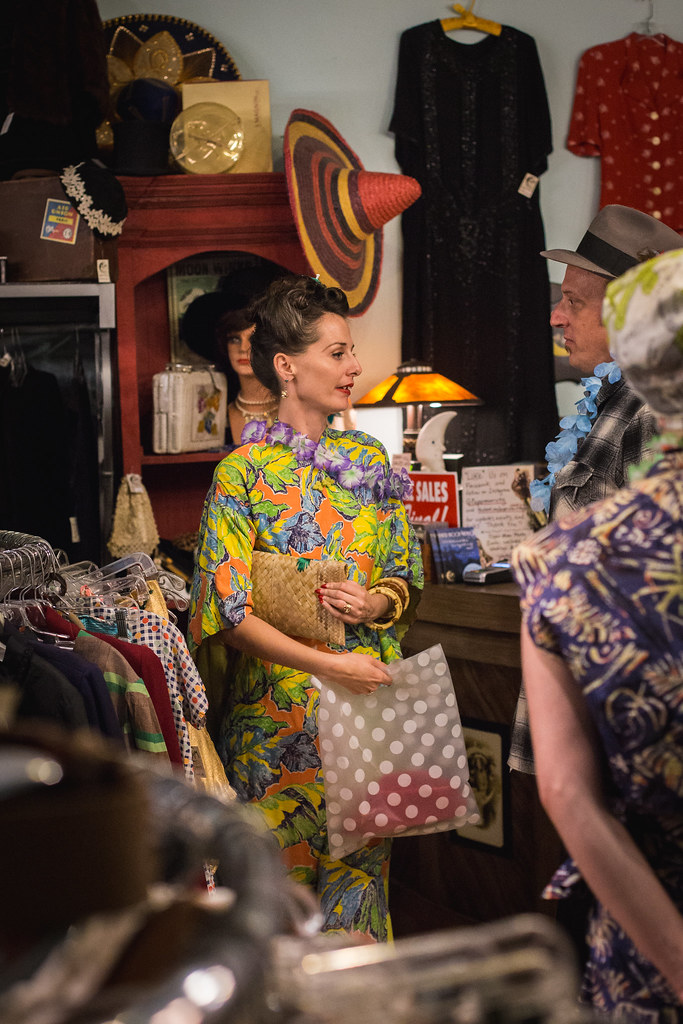 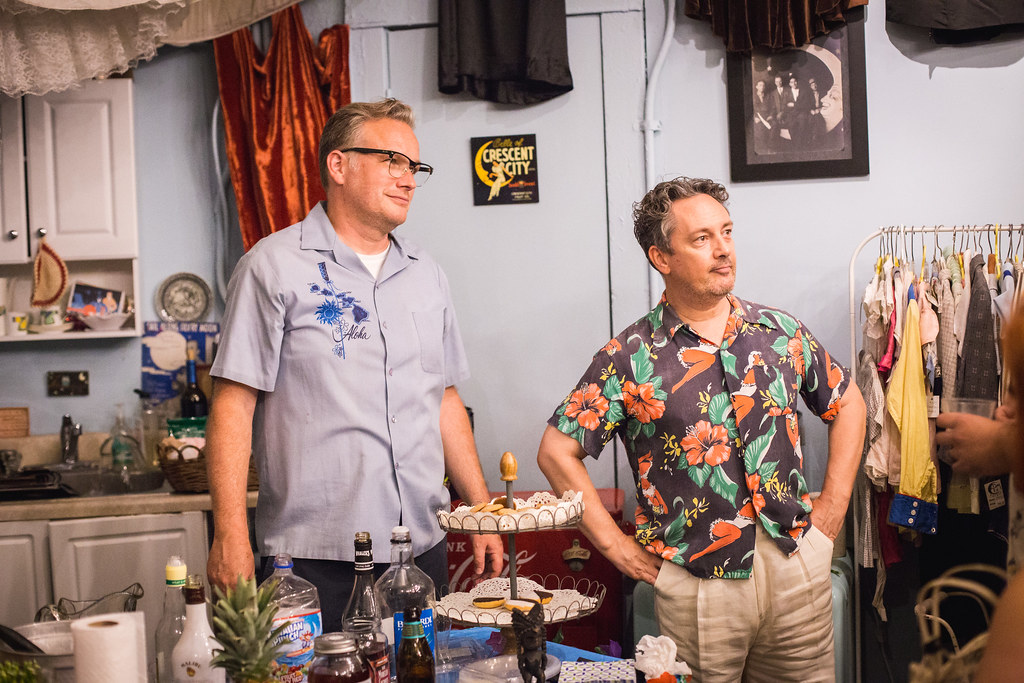 The bartenders, one subtle and the other bold. 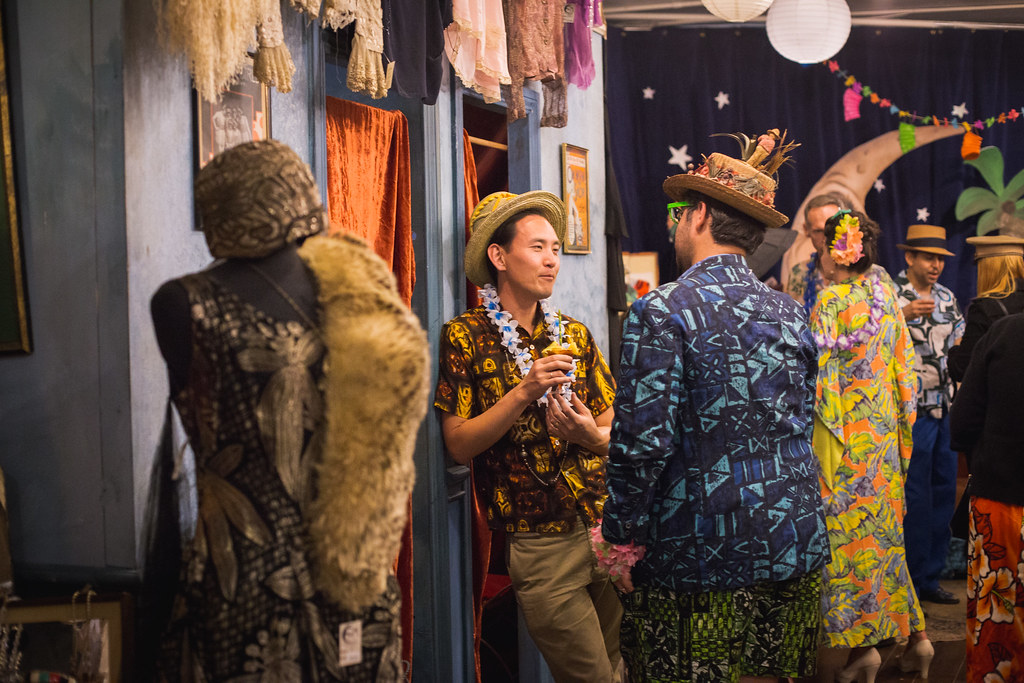 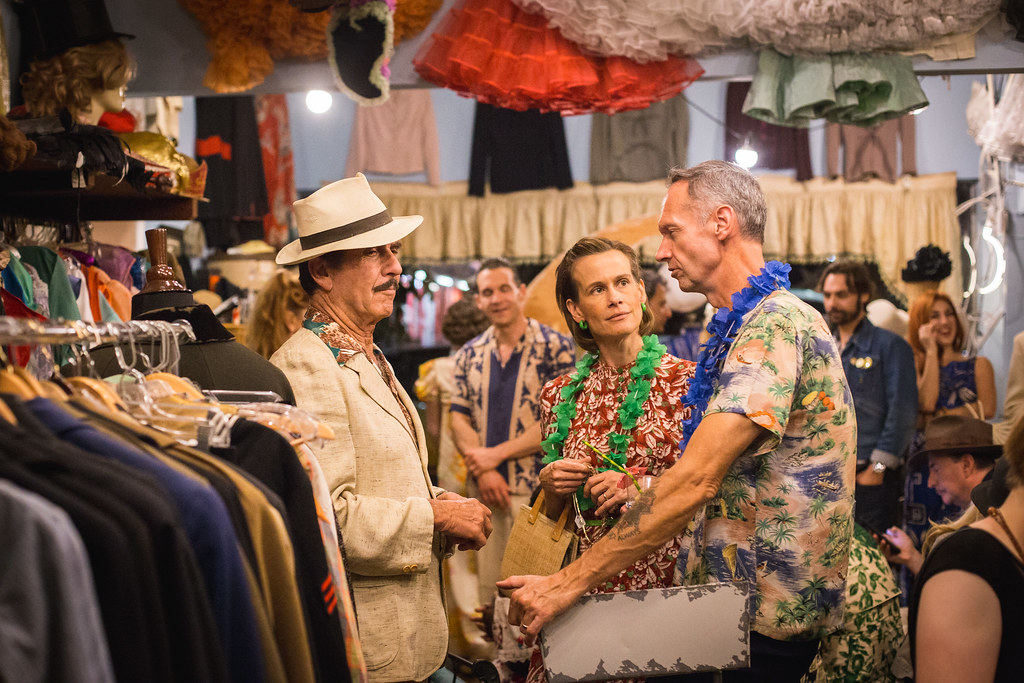 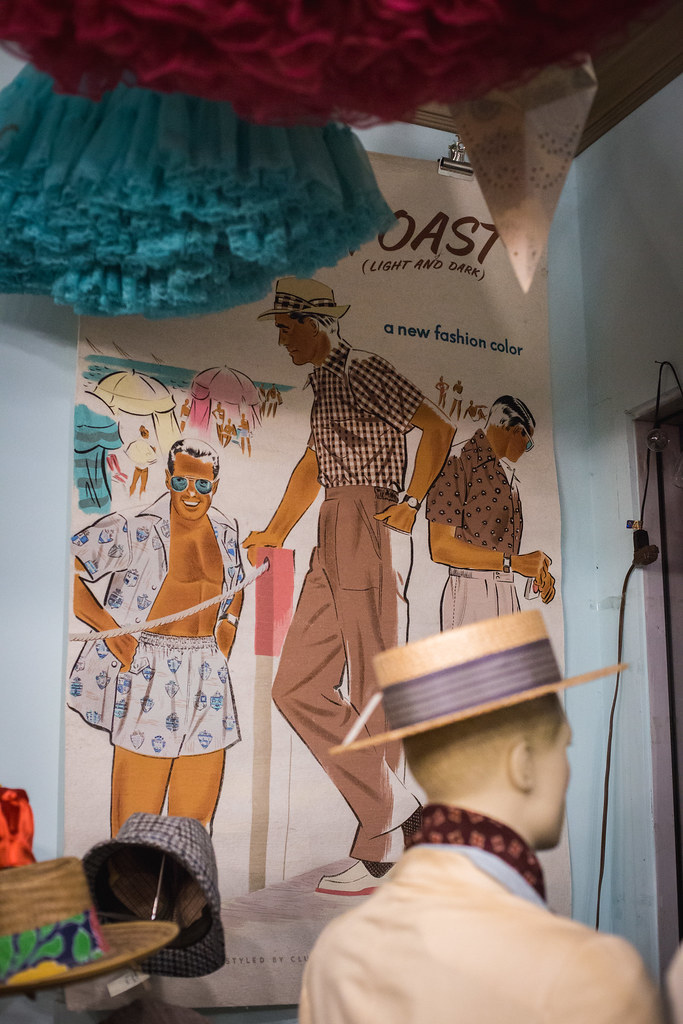 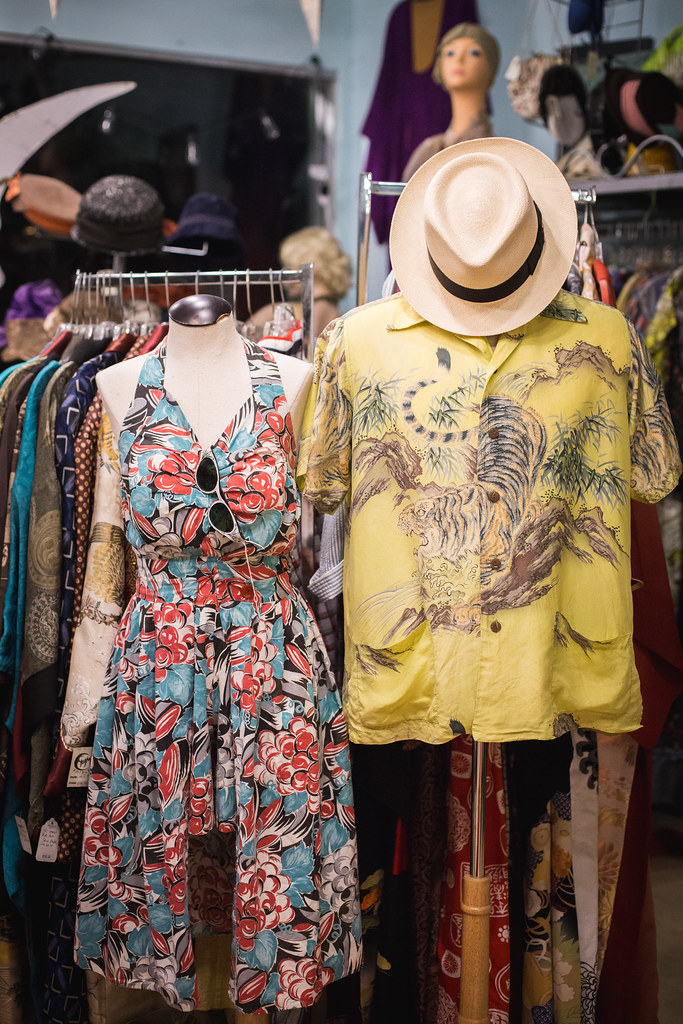 Some lovely pieces up for grabs at Paper Moon! I really love the shirt jacket on the right, though it’s more Asian than Hawaiian. 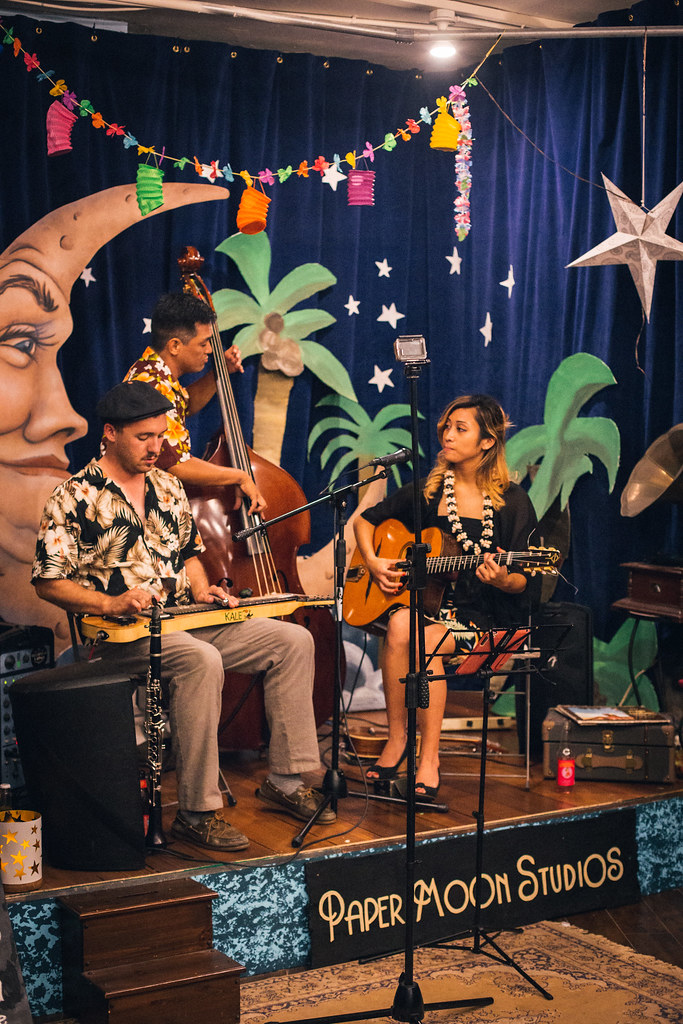 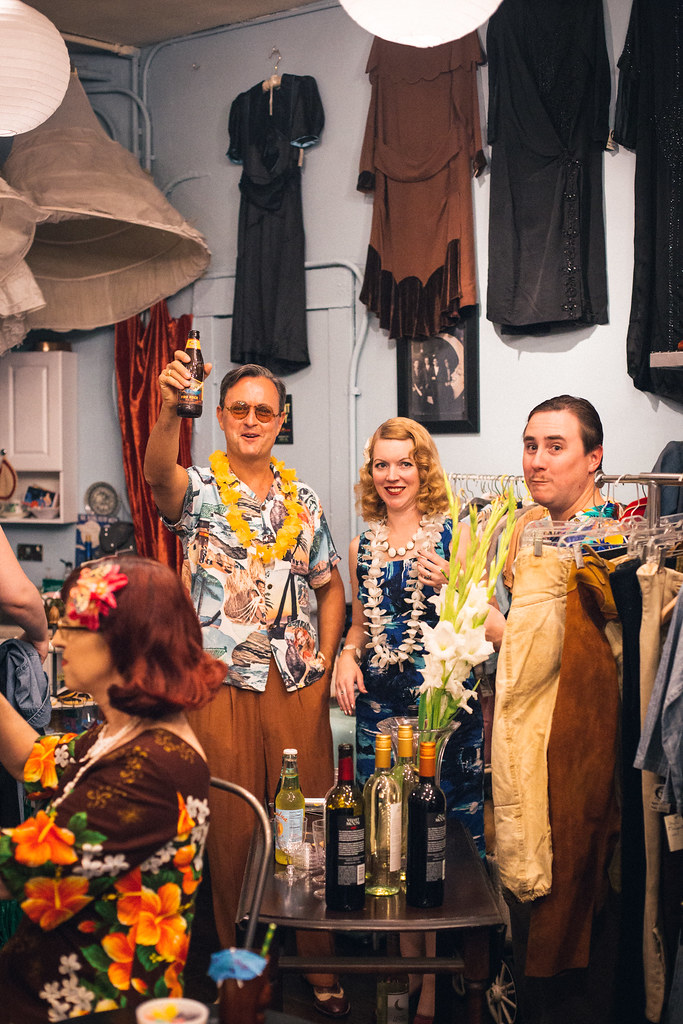 It was a swell evening filled with a great music, cool people, and magnificent clothing.  Paper Moon Vintage has certainly come a long way since first opening a few years ago!  When I first came to their store, they only had the main room with a tiny pop-up dressing room.  Now they’ve expanded their store to incorporate the space next door to house a stage, full restroom/sink, two dressing rooms, and a lot of great product!  Almost all of the main vintage people have shopped or sold pieces at Nicole’s store, so it’s one of the places I recommend most frequently. Additionally, the best way to learn more about vintage clothing and style is to feel the garments yourself.  There’s nothing like it!

Be sure to follow Paper Moon Vintage on instagram or like them on Facebook to stay in-the-know about upcoming events or “new” pieces that they get in store.  If the opportunity to make new vintage friends doesn’t get you excited, just know that they usually have a 25% off promotion during these parties!