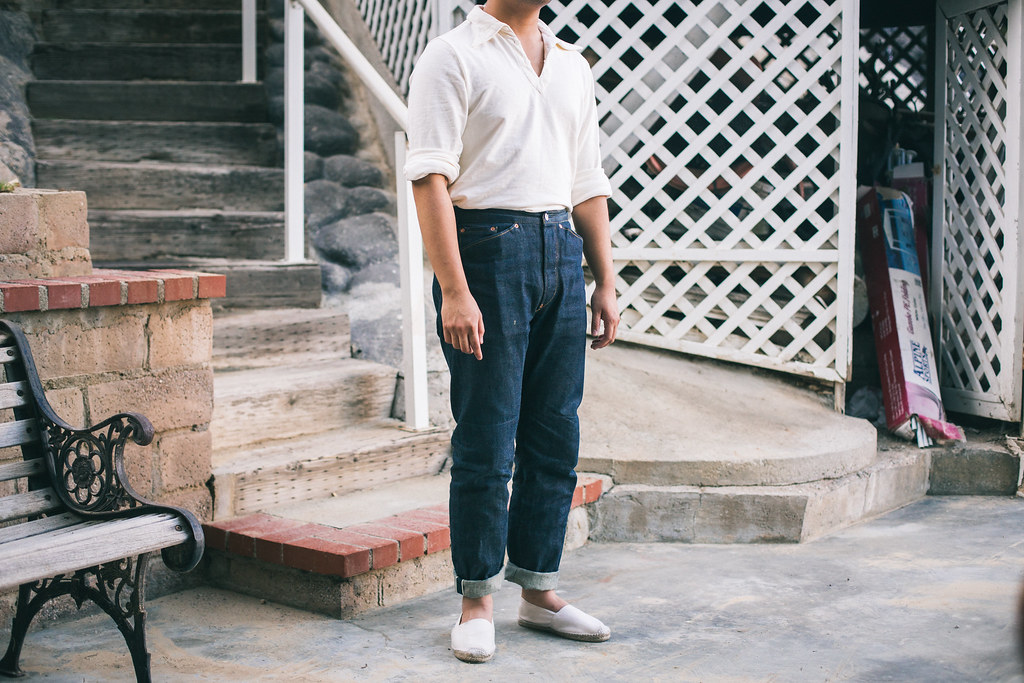 I’ve been fighting the good fight to make polo shirts “cool” again.  When the fit is right, the placket deep, and the collar wide, it can be a great substitute for a dress shirt and pairs naturally with a sportcoat and trousers.  But what about denim?

A polo jeans was a huge no-no in my book.  Usually it looks like this  while on a good day, it looks like this.  There’s something about it that doesn’t seem right to me.   Maybe it’s too stark of a difference in formality or it might just be the simple fact that it isn’t done right most of the time.   The outfit of polo + jeans (and usually sneakers or boat shoes) is adopted by high school/college guys who want to dress up but don’t require a dress shirt or lace-up. While we know that polo shirts can look good (see the Sartorial Polo and the 1930’s SJC polo) but seeing it paired with denim just leaves a bad taste in my mouth.

However, my mind began to change when I started to see it done well.  It still is a casual look (as a polo + jean combo should be) but it’s done in a more sartorial, mature way.  Just take a look at these inspiration pictures.

Are frayed jeans a thing now? I love it.

The best example of the look on Chad Park, with his Chad Prom jeans.

As you can see, it’s still a great replacement for a popover shirt.  Note the how the polo isn’t too fitted (you don’t want to be an Abercrombie model circa 2007) but is in a classic fit, resulting in a slouchy and easy going demeanor.  This makes it perfect for use in casually tailored combinations like with jackets with soft shoulders/little construction and a good pair of beat up loafers.

I’d also like to point out the fact that the denim isn’t exactly too dressy either.  We’re not talking about  the straight dark indigo selvedge that is mainly utilized when paring tailored pieces with jeans.  These are more of a regular blue “dad jean” that emphasizes the casual nature of the outfit and provides a much more subtle contrast between formalities.  However, I think the standard dark indigo denim will still work fine.

Overall, I think that’s the key to pulling off the look.  Firstly, you need to think of your jeans like denim trousers.  Slim-straight leg with a good cuff or hem that makes no break for a clean look. Any wash will do, as we can see, but I like light wash, dark wash (indigo), and plain blue.

Next you’ll need to follow my polo instructions and get one with a wide collar and a deep placket, to make it more like a pullover shirt than a normal polo.  It would be cool to provide some contrast  to the jeans, so either a dark polo (navy blue, white) or a subdued one (grey, tan) will be needed.  Again, this depends on the denim chosen.

Now a jacket isn’t needed, but if you do, a nice unstructured sportcoat in any color (browns, blues, and greys are best!) can put it all together. If you’re still unsure, perhaps using a dark brown loafer can ground the look down.  Hopefully this gives you guys more options besides chinos or linen trousers to pull off the Sartorial Polo outfit!

Now this look by ssun6154  has been on my mind for a couple of days now.  I wouldn’t necessarily call his top a polo (a shawl collar polo perhaps?), but it’s still a great look to get inspiration from.  It’s a little bit of workwear (high rise denim with large cuffs) with some modern flair (white sneakers?)!  Obviously, it’s not a strict sartorial outfit, but we don’t always have to be sartorial!

It appeals to me because it’s still decidedly casual, but it doesn’t come across in a childish way.  By that I mean, it’s definitely not the choices a high school or college student would make.  All of the pieces are intentional and work well together to make such an easy-going outfit with a subtle vintage edge. 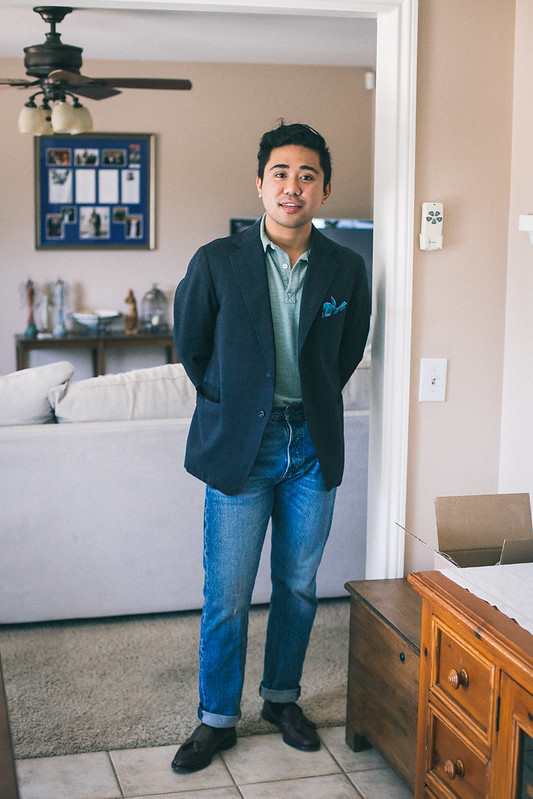 Here’s my first attempt at wearing a polo with jeans. As you can see, this one is taken directly from Chad Park and his faded, washed Chad Prom jeans. It’s pretty simple, consisting of the jade green SJC 1930’s polo , a blue sportcoat, and these Chad Prom-look-alikes that are actually a cheap pair of 501CTs that I got for $20 online.  These fit a bit slimmer than the selvedge 501CTs and the fades are pre-existing.

The result is an updated “dad look” that had a pretty neutral look and feels comfy.  It’s not too dressed up but it’s got enough sartorial pieces (that are tailored well) to make it pass for something “smart casual”.  I don’t think it would’ve looked good sans jacket, as that may have been way too dad like.  I will say that I wish I had a softer, unstructured flannel jacket to wear in this outfit in order to emphasize the slouchy-ness. 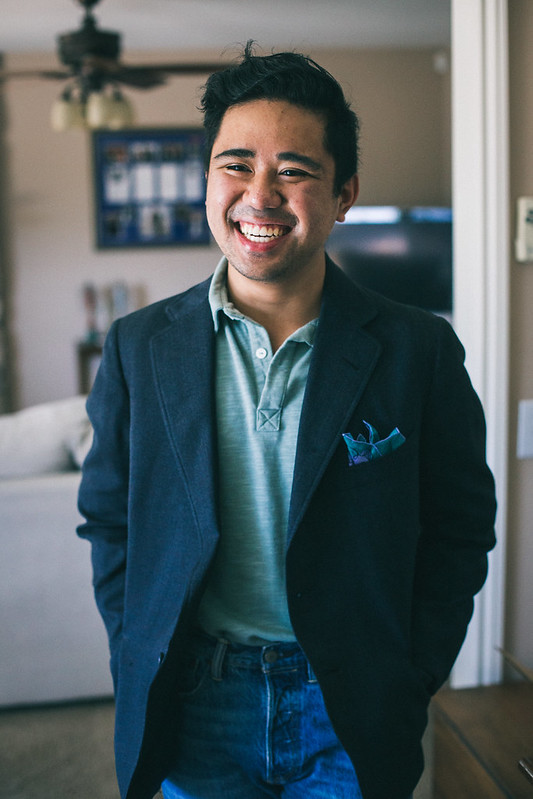 No runaway collar this time because that would’ve looked BAD with this outfit.

This was a nice experiment, but I think I’d probably stick with darker denim in order to ground the outfit better.  These lightwash jeans are in between normal blue and 90’s light wash , which honestly makes them difficult to pair with stuff as they don’t provide a lot of contrast.  The jacket definitely helps, but it’s too close in shade to the green polo.  Like I said, if I repeat this type of look (denim + jeans + sportcoat), it will probably with darker colors.

It wasn’t that bad of a look though, right? 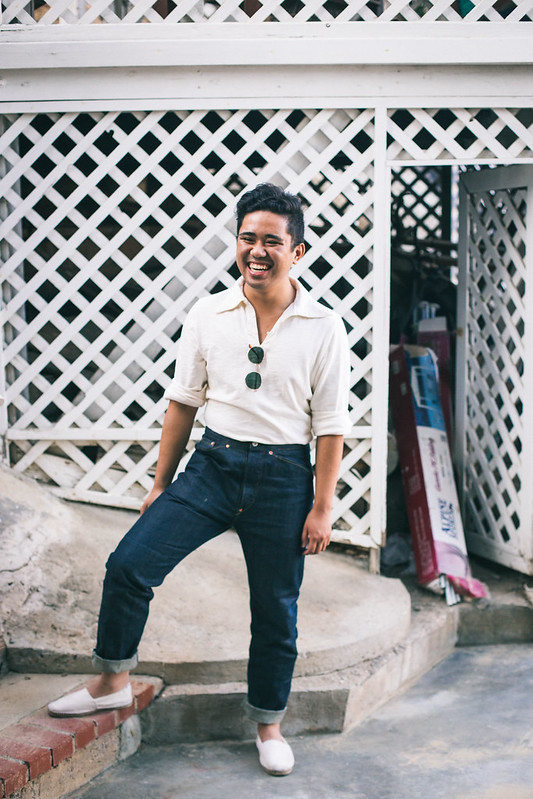 I think that this outfit is the best way to pair denim with a polo shirt that isn’t too dad like.  It’s follows the vintage/workwear inspired outfit that ssun6154 wore in the picture I included earlier in the article! Like him, I wear a vintage polo (the Oviatt SJC polo, with long sleeves, loop buttons, and wide spearpoint collar) with my LVC 1878 “pantaloons”; instead of white sneakers, I go even more summer-comfort with my espadrilles.

While chinos could definitely work in this outfit (some would say they were the better choice), I like the idea of using selvedge denim.   As I stated before, it’s has a bit of “vintage youth” and workwear vibes to it that the classic menswear community tends to ignore.  It probably helps that the LVC 1878’s lack belt loops and feature frog-mouth (read: western) pockets, which makes them a more interesting trouser instead of just regular jeans.  They also remind me of The Armoury’s latest collaboration with Ambrosi Napoli: western-style linen trousers. 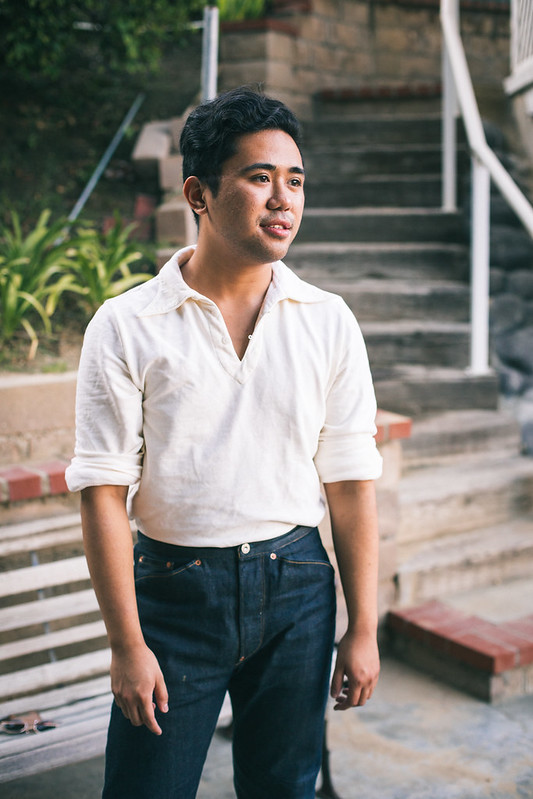 I really love this outfit.  You could swap the top for a simple pocket tee or even a vintage sport shirt (and it would still make a good look), but the use of the polo is much more interesting to me.  With its vintage details, it redefines what a polo is; no longer is it the uniform of business casual accountants but instead becomes a cool replacement for a button-up, that feels more like a soft pop-over.  I’m probably going to repeat this outfit much more in the future. 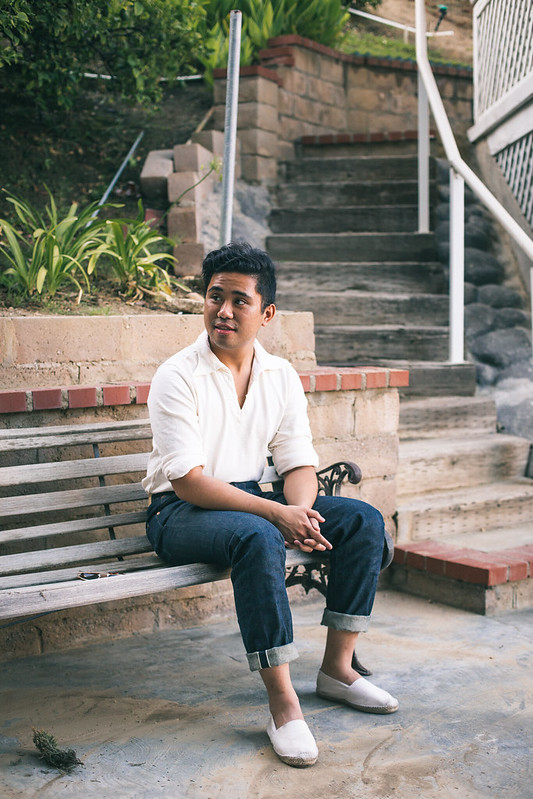 Yes, you can wear a polo shirt with jeans but not in the way you’re thinking of. Instead of doing what a high schooler or college student would do, why not think of the jeans like trousers?  Tuck in the polo (which should have a deeper placket and longer collar) and pair it with some loafers and a sportcoat to channel your inner Chad Park.  The jeans should have a high rise, your jacket should be soft, and your shoe choice can be either a loafer or nice derby.

Or you can do it in a more Street x Sprezza way and incorporate some vintage, slouchy style by trying it with raw selvedge denim and espadrilles!  It’s a great year round outfit (though I would suggest shorts if its too hot) that has enough character to stand out without being too bold.

While I like the last outfit more than the first one, the decision lies with you.  If  you take anything away from this article, just know that you definitely can wear your polo shirt with jeans. Hopefully you get some inspiration from this post.  If you try out the look, send it to me on Instagram; I’d love to see it!