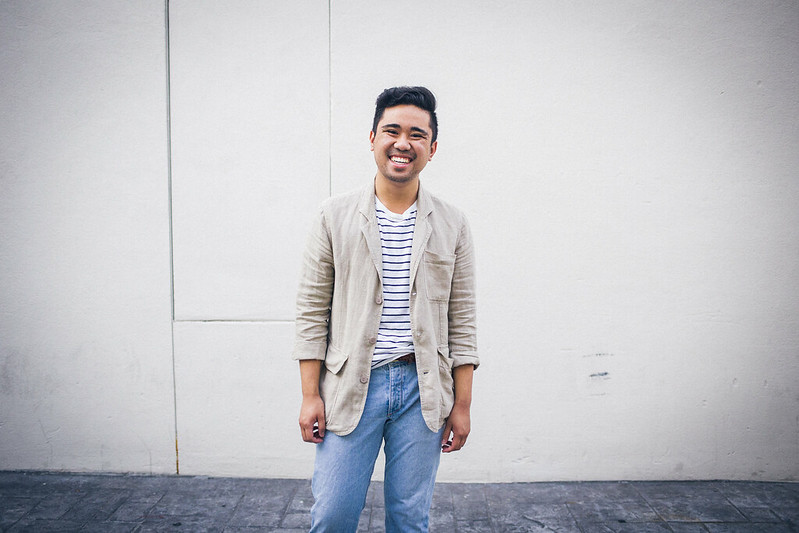 Time to be like a basic #menswear blogger and do that whole thing where we take one item and style it two different ways!

You guys may remember the cool linen chore coat I got from Aspasie & Mathieu during my trip to Paris. It’s 100% linen, completely unstructured, surgeon (functioning) cuffs and features three patch pockets.  Unlike the classic indigo chore coat , this one is cut a bit more like a sportcoat. It has 3 buttons and actual lapels, which makes it similar to Spencer’s chore coat. Overall, it’s a pretty cool jacket that definitely reminds me of vintage European tailoring.  Just compare the cut and design to the 1920s-1930’s jackets found by German vintage enthusaist Wilhelm, like this one or this one: relatively small droopy lapels, big patch pockets, 3 buttons, and a shorter body length.

Because it looks more like a legit sportcoat, I don’t wear it as much as my true blue (lol) chore coat. It also doesn’t help that the jacket has long sleeves, so they’re perpetually rolled up.  Don’t worry, I’ve worn it a few times: 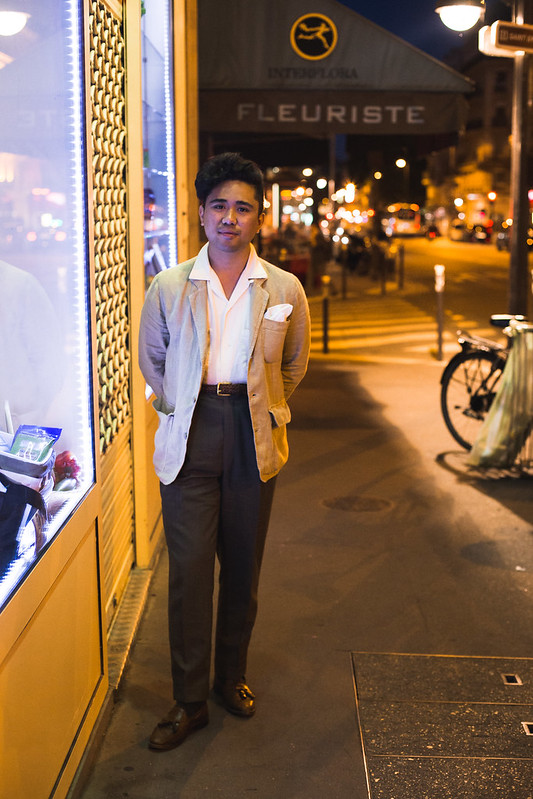 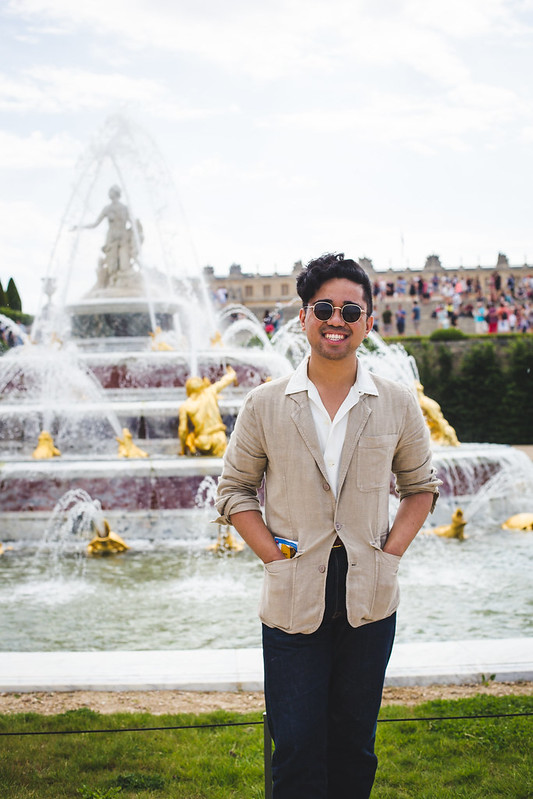 Both are kinda dressy-casual with the use of a vintage sport shirt while the first one uses trousers and he second one uses denim.  However, I still didn’t wear it much after my trip, other than the Her article.

Now here’s some insight into my daily life. Usually on Sunday nights, I plan my outfits for the week.  Doing so not only saves me time each day, but it actually helps me plan my Instagram/Blog posts by determine what to shoot and what to relax in. Usually I’m pretty picking original outfits without too much “inspiration” but this time I decided to look at Bryceland’s.

For those of you who don’t know, Bryceland’s is a menswear store in Tokyo that really exudes what this blog is about: mixing vintage and contemporary menswear. There’s a bunch of inspiration I could show you, but I was particularly intrigued by how they use chore coats with tailoring.

After keeping these images in my head, I decided to make an outfit for work with the chore coat. 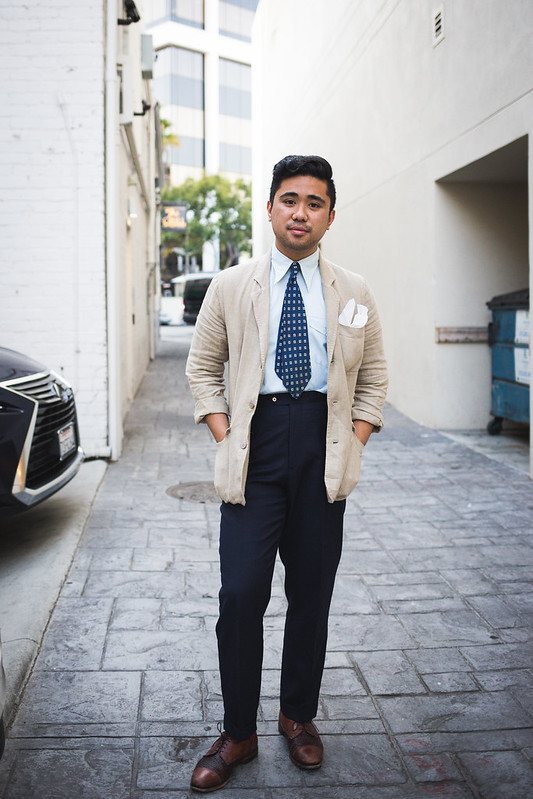 This was the outfit that I went with for work. As you can see, it’s still very clean (and very ethan) but it’s made interesting with the addition of the chorecoat. I posted it on the Street x Sprezza facebook group, but many people weren’t too keen on the combination of tailoring and something workwear/casual.  I’ll still maintain that it looks pretty cool and can recommend it to others.

It’s worn here with a Natty spearpoint collar, 1930’s tie, MTM flat-front trousers from Indochino, and woven spectators. I’ll give these derby spectators a shoutout since they’re perfect for summer (the weave allows the feet to breathe) and aren’t as flashy as a real two-tone pair. 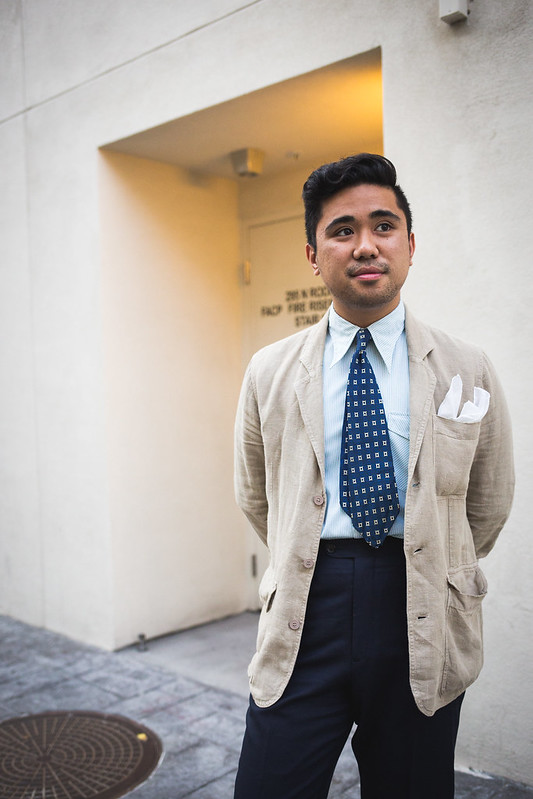 The main way that this outfit differs than the Bryceland’s ones is that my shirt isn’t as rugged as theirs.  I went with a regular striped spearpoint (without a collar bar) instead of a textured OCBD, which you could argue is the better choice.  However, my tie is a woven one instead of my usual brocades, which makes it a bit more casual in my eyes.

Overall, I see this jacket as sort of a reincarnation of the old smoking jacket.  When a man came home, he would take off his suit jacket and do a smoking jacket when lounging around the house (or more accurately, smoking in his study).  My linen jacket does the same thing: it’s a casual jacket that is mainly for comfort, yet still looks smart as it is worn over tailoring.  If you can’t tell by the wrinkles, I was perfectly at ease when I was at work. 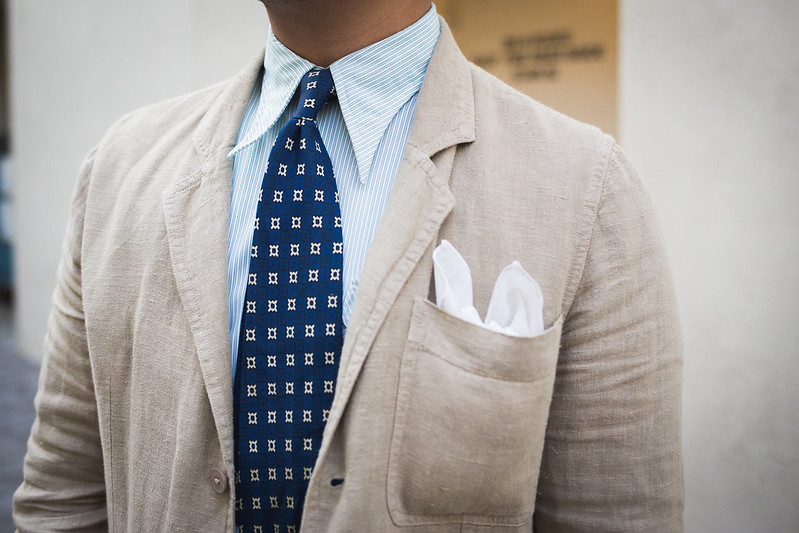 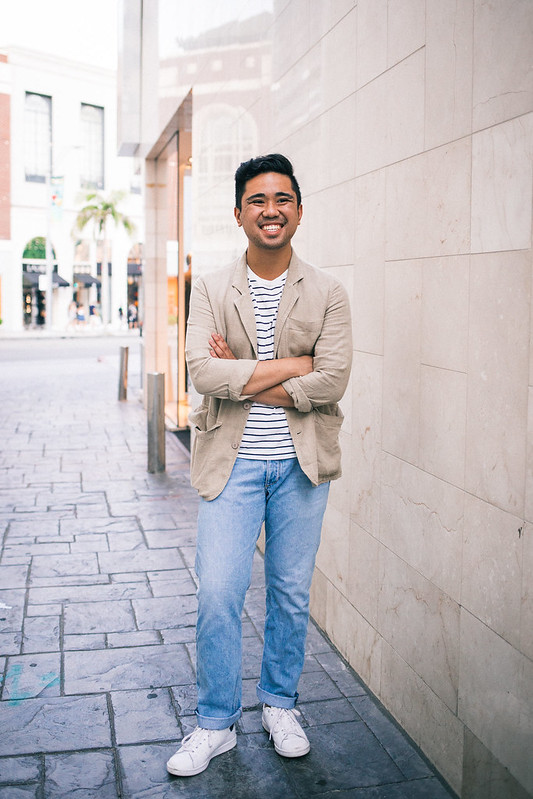 Oddly enough, this was actually the same day! In my last few minutes of work, I decided to change into some casual clothes so I could get boba with my friends.  Don’t get me wrong, I like to live in my tailored pieces but some days, I just want to lounge in jeans and a tee you feel me?

If you know me in real life, you’ll know that I have a thing for slightly minimal Japanese/Korean casual style.  That style definitely draws it roots from 90s and Palewave style, both of which emphasize light, understated colors and the use of white sneakers.  It’s been in my mind for a while, but this, this, and this were definite inspirations behind the outfit.  Very normal (normcore?) and easy. 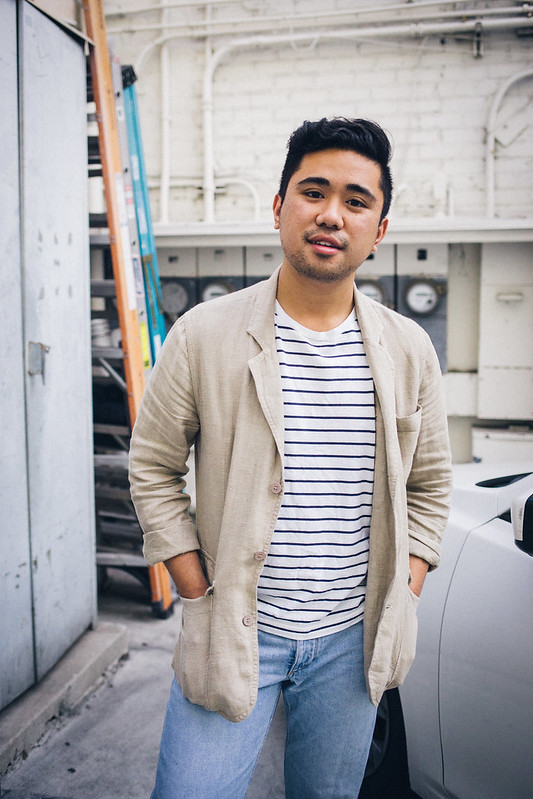 Anyway, I liked the striped tee with the jeans and sneakers, but I knew it was missing something.  I thought to myself, why not try wearing the linen chore coat with this outfit?  I’m very much against wearing a sportcoat with a tee shirt (no matter what past blog posts you may bring up), especially when there aren’t trousers or more formal shoes involved.  The thought occurred: if I was subverting the traditional sportcoat for a chorecoat, why can’t I do the same with this for a gab short jacket ?

Treating the chorecoat like a regular ‘ol jacket worked, I think.  It makes the outfit a little bit different than just a tee shirt and jeans, which was the intended effect of the previous outfit. Now that I think about it, it reminds me of the countless Engineered Garment Bedford’s that I’ve seen utilized across a bunch of different outfits on Reddit like this one or this one.  Looks great with everything. 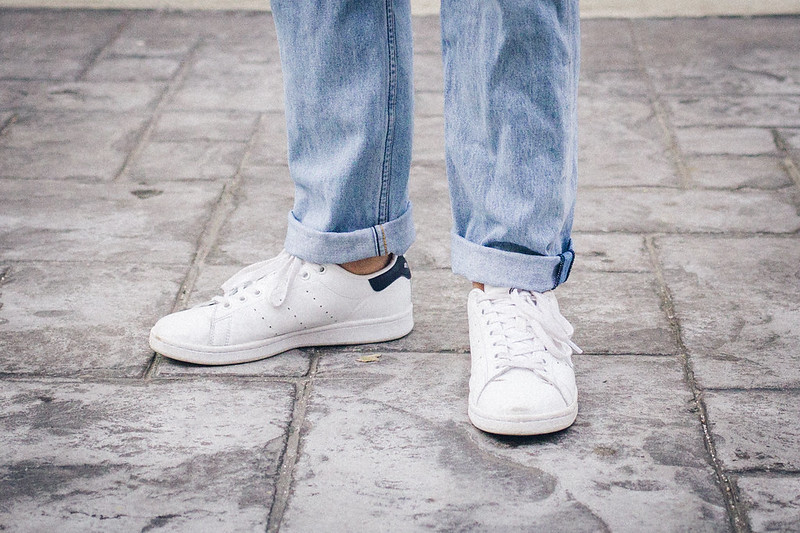 Haven’t written about these shoes (nor will I), but I think they’re cool!

As the climate continues to be a dry 100+F in  Southern California, I’m pretty sure I’m going to wear this chore coat pretty often.  I’m actually starting to prefer it over my indigo chore coat since this linen one is more understated, which allows me to wear both with light colors (for an entirely pale outfit) or effectively utilize dark ones for contrast; the latter comes into play more, since I wear pretty dark T-shirts.

I will admit that the last outfit has a bit of Asian mom vibe, but I dig that style. I’m a firm believer that you can get inspiration from almost anywhere; it just takes the right execution of those ideas.   Many times on the blog, I’ve mentioned that I own pretty versatile things in my wardrobe, but they tend to fall on the more tailored/workwear spectrum instead of straight, super casual.  It’s nice to have a garment that can literally work for anything I need it to be.  The only things I can think of that work for both extremes are espadrilles and jeans.

Hope you enjoyed this post! I’ll be sure to add more of “casual Ethan” on the blog, not only for you guys, but for my own record keeping as well!