Just saw the 1967 film The Graduate and I knew I had to do a post based on Benjamin (played by Dustin Hoffman) and his wonderful ivy style.

If you’ve talked to me on my instagram or in person at all, you’ll know that I’m not a huge movie guy.  I mean, I’ve seen MCU films, Star Wars, Indiana Jones, but I’ve never really seen a lot of classic films.  Contrary to popular belief, my love of vintage style didn’t come from watching movies from the 1920s-1960s; it just came from liking the aesthetic that I saw from pictures of regular people and vintage illustrations.  But I’m trying to get into it, especially thanks to Spencer (who is a bit of a cinephile).  North by Northwest is one of my favorite films, along with Rear Window.

Anyway, something that’s been on my list is the 1967 film, The Graduate.  I was first introduced to it by a small snippet of it that was shown in 500 Days of Summer, concerning the famous ending.  Later on, I saw the praise of Benjamin (played by Dustin offman) and his outfits on the Ivy Style Facebook group since he was absolutely ivy in his attire.  Since I had an empty Friday night (per the usual for my exciting 22-year old life), I decided to watch the film.

You can read about the film on Wikipedia (or TV Tropes, which is my preferred way to learn about films).  I don’t want to give a lot of it away, but it basically follows Benjamin, a new college graduate, who is apprehensive about his new life.  He eventually gets involved with the both women in the Robinson family.

As a young man in the 1960’s, Benjamin is at the height of ivy/mad men style.  In almost all of his scenes, Benjamin dons a 3-roll-2 jacket, OCBD, and slim tie.  He’s never really in a suit (since that’s more for professionals and business man) and instead opts for smart separates.  Even though its 1967 (which is probably already getting weird with late 60’s Austin Powers style), Benjamin keeps it pretty normal.  It’s nothing too flashy (no crazy pattern mixing) but not boring either.

I honestly think he was pretty overdressed for almost every occasion, which only helps his awkward demeanor.  Casual American style was in full force during the period, but Ben is almost always dressed up in scenes where he’s not in a bathing suit or underwear.  This lends an air of classicism to the film, emphasizes the inherent “good yet troubled” nature of Ben (I personally think he’s a creep), and makes him stand out.  I think he’s one of the best dressed characters in a film.

For his date outfits, Ben wears an awesome seersucker (or is it just a cream striped wool?) jacket with grey trousers, light blue shirt, and black knit tie.  It reminds me of this outfit by Arnold Wong of Attire House, just with a black knit tie (like he wore here).  He’s clearly a master dresser since most guys are at a loss on how to pair a striped odd jacket.  His outfit tells us that grey trousers really do go with everything; if you’re ever unsure how to ground an outfit, go with grey.

I wish we were able to see this outfit in full, but we can only see it hastily put on (and then removed again) during one of his visits with Mrs. Robinson.  I’m certain the trousers are grey, but I really like the use of a brown jacket and repp stripe tie.  The combo really seems like something I’d wear.

Imagine if more guys wore this on their dates! Though personally, I think it’s a little too much, especially today.  This isn’t a basic fashion blog, but if you guys want to know what to wear on a date, it’s pretty easy to go with a nice jacket (leather preferred), striped tee, and black jeans/boots.

I also wish we got to see more of this outfit, since it’s one of the earliest instances of wearing a sportcoat with jeans.  It’s a pretty bold (read, non ivy) outfit since it’s a yellow jacket with a black polo, and faded jeans.  Note that the jeans don’t appear to be raw denim or even dark indigo.  It almost looks like its something a guy would wear in 2015!  I never even knew guys in the 1960’s would wear a polo shirt with jeans.

I’m wondering what he chose for shoes with this.  Loafers?  Derbies?  I hope he’s wearing white socks with some weejuns.  That would be dope.

When I first wrote this blog, I remember Tim telling me that parkas were all the rage.  It seems that they were pretty popular in the 1960’s as well!  Parkas, anoraks, and field jackets were all pretty much surplus, which was attacked by college students who needed cheap, utilitarian clothing.  Thanks to this, having a nice parka with chinos is a pretty ivy look that is still applicable today!

Ben wears his parka for almost the entire third act, providing shelter from the rain.  The outfit kinda gives me palewave/monochrome vibes since the parka is tan and blends with his chinos.  It’s still a dope look and is a cool, young alternative to the more mature trench coat.  Plus I’m sure wearing a trench coat for a romance-drama would give the film a Casablanca vibe.

Here’s the outfit that really stuck out to me and it’s no surprise that it’s a classic sartorial look.  Ben wears this for the beginning of the film, for his welcome home party and his initial seduction by Mrs. Robinson.  As a college student, Ben wears a 3-roll-2 hopsack(?) charcoal grey jacket with a yellow ocbd (an underrated color) and grey trousers.  For some pop, he has a repp tie that features black, gold, and white; pretty bold colors, which could point to the impending style of the 1970’s.   While the tie is bold, the entire outfit is pretty understated, which could point to the fact that Ben isn’t dressing for peacocking-style (a la Gatsby), but rather as a sort of uniform. Note the lack of pocket square, which I’m sure is intentional.

It is this particular outfit that inspired this post but you could honestly get all sorts of inspo from his film attire! It’s not as bold as the 1930s or 1940s; you could wear all of outfits today, without changing any of details. The lapels are classic, the repp ties are dope, and the fit’s are perfect. 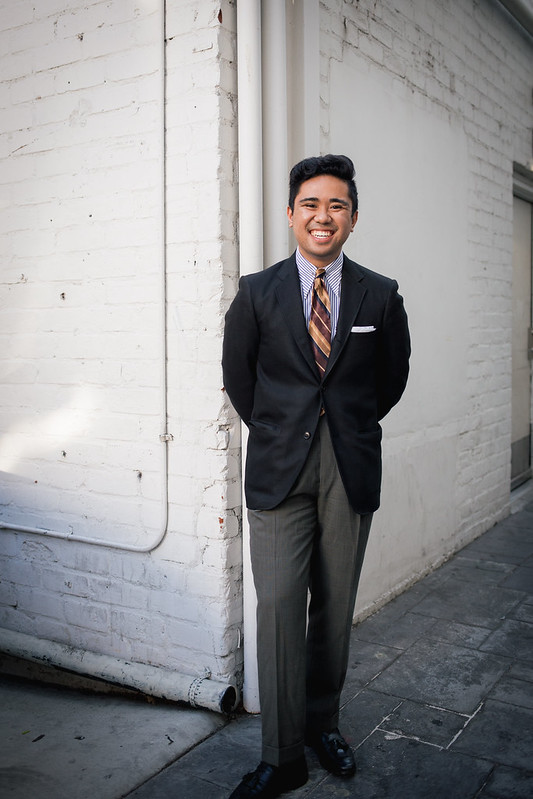 It’s important to remember that this is my version of Benjamin’s party outfit, not a straight recreation. I keep the relevant color palette: dark charcoal grey jacket, plain-ish shirt, brown/gold stripe tie, and grey trousers.  Like Ben, my tie takes the main stage as it shines through the other dark pieces.  I’ve gotta say that I’m starting to like darker, flat-colored pieces; I used to think they’re boring compared to blues and browns, but they really add maturity and stoicism to an outfit. 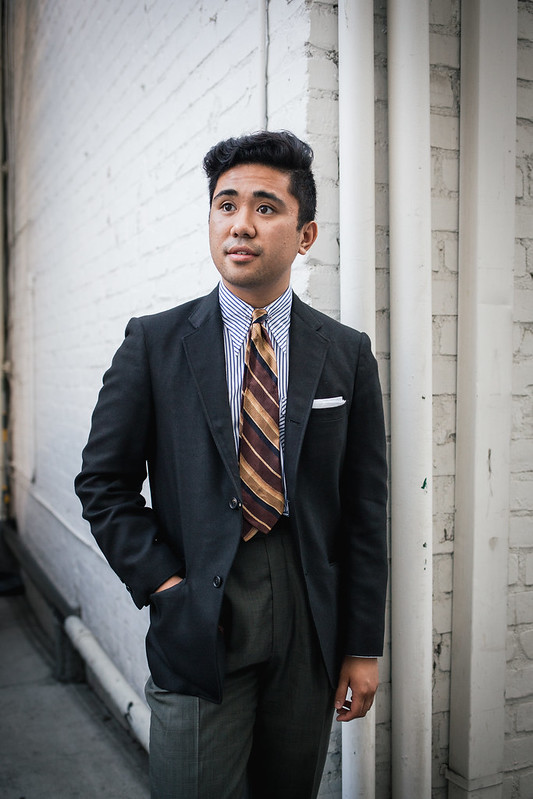 The jacket is almost the exactly the same one that Benjamin wears in the film.  It’s actually also made of hopsack in a 3-roll-2 configuration.  The slim lapels and buttoning stance point to the 1960’s, but the funky paisley half-lining in the jacket specifically point to a late 60’s jacket.  Unfortunately, there isn’t a date stamped inside for us to know for certain.  On a separate note, the manufacturer has “California” in the name, which is cool since The Graduate takes place here! 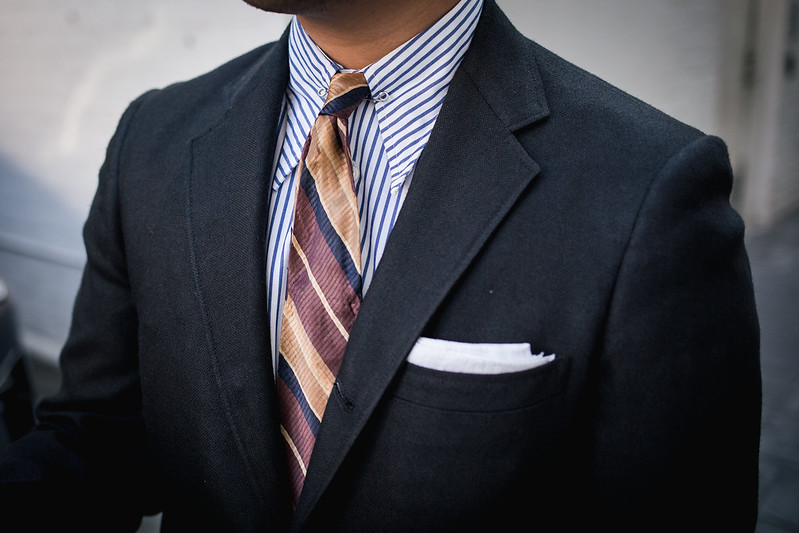 While the outfit is extremely inspired by Ben’s outfit, I definitely took some liberties to make it my own. Instead of a plain yellow OCBD, I opted for the Ethan favorite: a blue striped spearpoint collar and collar bar.  It adds some 1930’s flair that is intentionally fashionable; something that Ben wouldn’t do.  I also added a pocket square for some extra pizzaz, but note that it’s not the exploding one that I normally recommend when going for a vintage look.  The conservative, TV-fold is something more in-line with what you’d find in the 1960’s.

You can’t tell in the pictures, but I also opted for pleats on my grey trousers.  Pleats were definitely out of fashion by the late 1950’s, as men were going for a slim, flat-front look.  It might have been period appropriate, but I definitely prefer pleats over flat front since they are more comfortable (for my massive thighs) and are more visually interesting.  Plus as a track runner, Ben is a slim guy, which contrasts sharply with my more average body type.   Either way, I’m pretty happy with my own version of his outfit!

There is so much inspiration to be had from Ben (played by Dustin Hoffman) and his outfits.  Even though he’s an awkward creep who practically ruined a family, you can’t deny that he’s a sharp dresser.  He’s not super fashion forward for 1967, but he wears some classic ivy-trad staples that make him one of the best dressed characters in film.  What’s even more interesting is the fact that while his attire changes from scene to scene, the overall style is consistent and exudes his personality.  It actually makes him stand out in almost every scene, which is the effect of great costuming.

I hope you enjoyed my own interpretation of his party outfit! You’ll notice that while the general vibes and color palette is there (I even almost got his exact jacket), I was able to inject my own style into the outfit without making it completely different.  Its definitely an outfit I could see myself wearing again. Like I said earlier, it’s a bit darker than what I’d normally wear, but I love how clean it looks.

With this post and the Her post preceding it, I’m really enjoying these film style analyses and recreations! If I do them more, I’ll probably get to watch more of these great films (both new and old) that I’ve been missing out on.  The Graduate is definitely going down as one of my favorite films and especially as a great source of outfit inspiration.