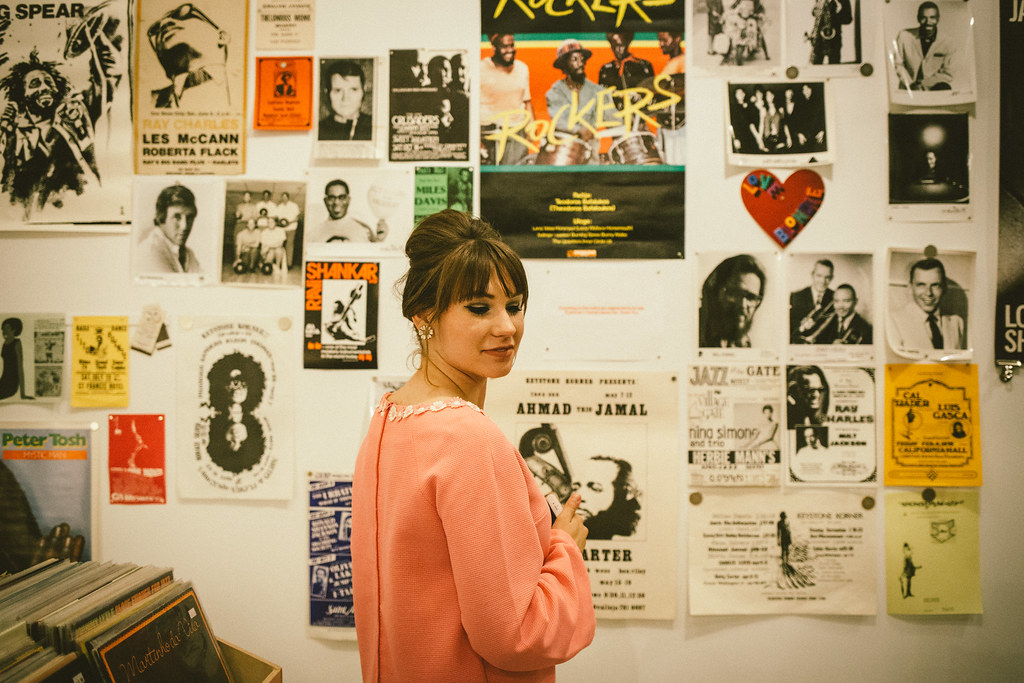 I know we’ve already posted  an article for the week, so here’s a little bonus content.  I was invited to go to the official launch of The Bloke, LA’s latest haberdashery, and it was a gas.  I never get to go to events like this!

For those of you who need a refresher, The Bloke is a new menswear store, located in Pasadena.  You can read all about it here, but it’s a store that stocks American-meets-Britain pieces like Tellason, Drake’s, and Hilditch & Key to name a few.   Presenting their wears in a very 1960’s/mod way, this store is a definitely refreshing as non-vintage, non-designer stores are rare in LA.  At least for menswear, that is.

As the Bloke has been open for almost a month, Jeffery Plankser (the owner) decided to have a big opening party.  There was a full band (with a vintage organ), free booze and food, and a bunch of people!  It was the first time I’ve been to something like this, as there aren’t many classic menswear stores in Los Angeles.  I can’t count how many times I’ve been extremely jealous of the different menswear events in other places like the debut of We Are Dandy at the Armoury NYC, a pocket square painting event at Ascot Chang in HK, and the soft open for Anglo Italian in London.  We really stuff happening here in LA, and I’m not sure Supreme drops count.

The guests in attendance varied, from Jeff’s colleagues from work (he is a commercial director) to his associates at DubLab (where he DJ’s occasionally); I’m sure the others were people in the local community! I did my best to take as many pictures as possible, but there really were a lot more people than I expected, which is a good thing!  Everyone enjoyed the music and the company and I’m sure you’ll be able to see it in the pictures.

By the way, I’ve been really enjoying the photography style of F.E Castleberry  and I’ve been watching the Netflix show Mindhunter, so you can see the subtle yellow-green film(ish) tint in the pictures this evening. 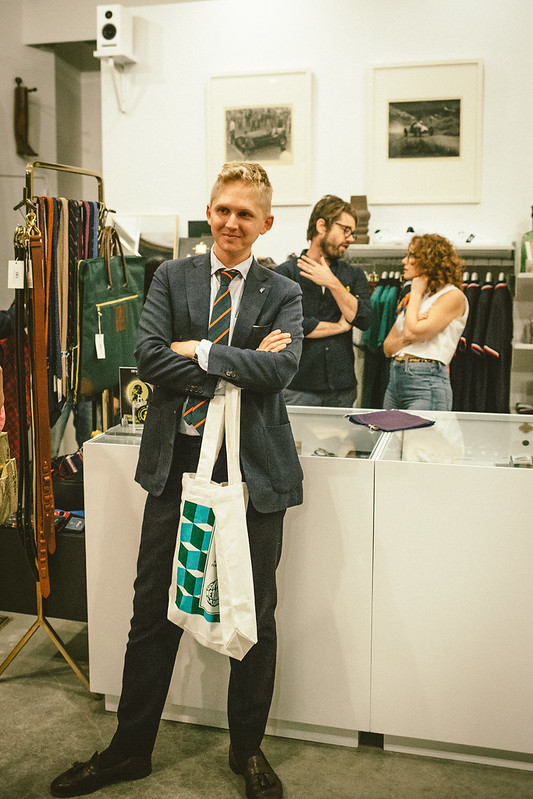 Ryan wore a fairly simple ensemble that really exemplifies ivy in an updated way. It’s fairly similar to the outfit he wore to the soft opening a few weeks ago, except with some new details.  He maintains his blue 3-roll-2 patch pocket jacket but ditched his green trous for a conservative pair of charcoal grey slacks.  For some festive pop (it is late October), he adds a green and orange repp stripe tie.  Straight ivy! 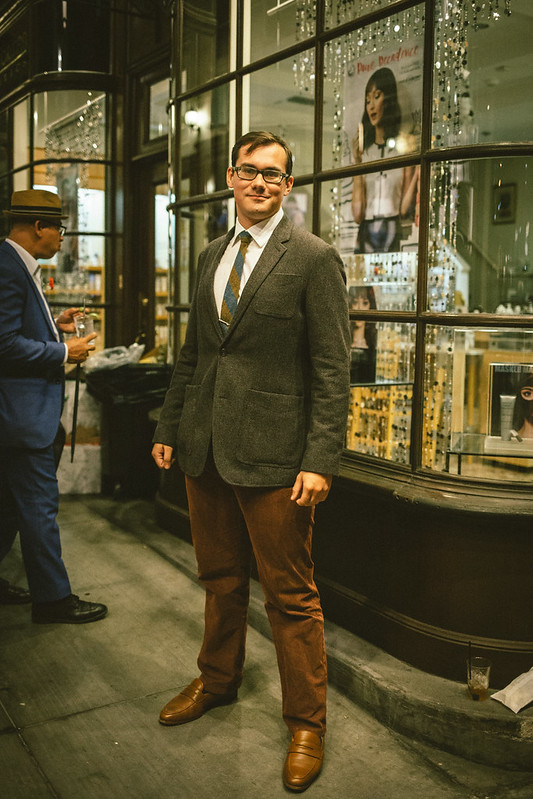 Paul was a fellow young gent that we met at the party.   I’ve gotta say, I was digging his outfit!  Patch pocket jacket? Yes. Brown cords? Hell yes.  Penny loafers? Fuck yeah.  It’s so simple (all he added was a white shirt and vintage brown stripe tie) but its extremely effective at creating a classic look that works just as well today as it would have back in 1962. 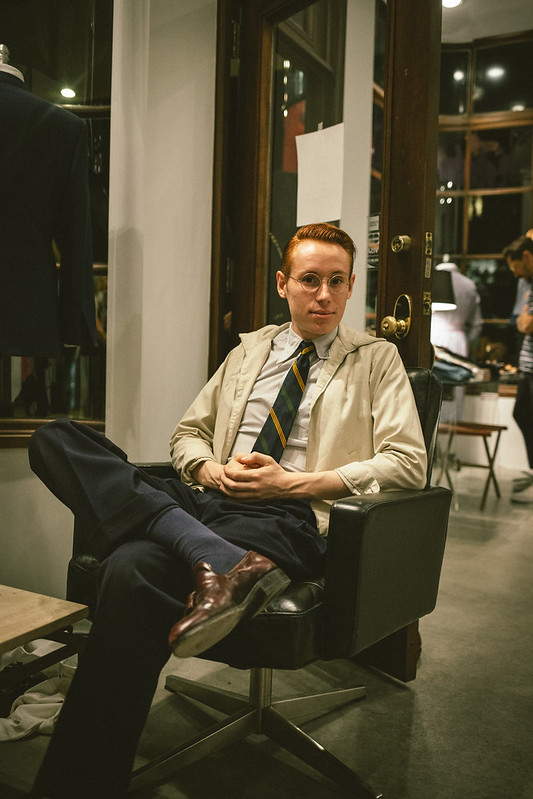 Blake decided to go for a casual 30’s outfit with a vintage gab short jacket , spearpoint shirt, and wide 40’s trousers (with an unphotographed self belt).  I guess my style has been rubbing off on him, since he wore a slick pair of burgundy tassel loafers, which really are my signature shoe.  Funny note, he actually bought that repp tie from The Bloke!  Jeffery found an entire tub of vintage 1950-1960s ties in an attic and decided to sell them at the store.  I picked one up myself! 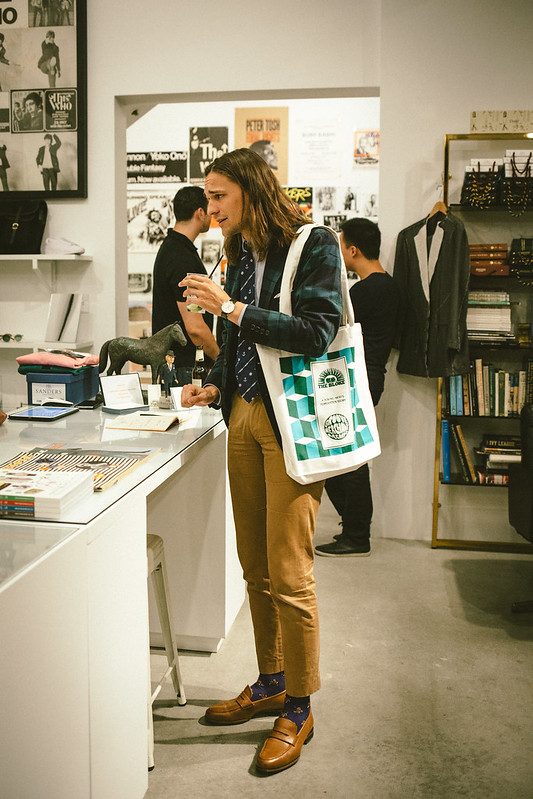 Ryan is a shoe designer who really loves the whole ivy/trad style and it certainly showed in this vibrant outfit.  An ivy blackwatch jacket from Gitman Vintage was the star of his outfit, but he certainly kept it going with a club tie and some fox print socks.  I’m not sure I could even do that myself! 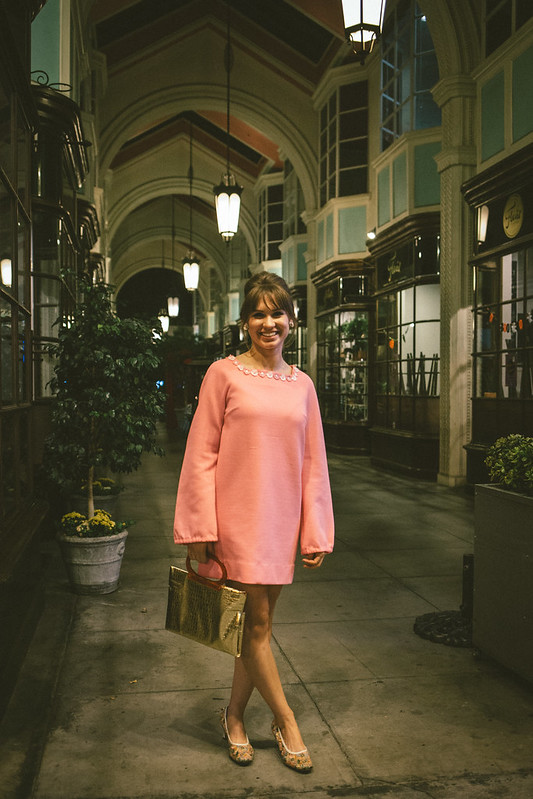 My friend Rachel decided to join us for the launch party and just killed it.  She’s a vintage enthusiast, but unlike most people I know, she actually loves the late 60’s! Rachel wore a true vintage pink dress that was simply incredible. With a gold purse (that converts into a tote) and some floral print shoes, she brought true mod style to The Bloke.

So here are some random snaps of the party!  There’s really not much to say except that it was a lot of fun.  I really don’t get to do stuff like this very often! 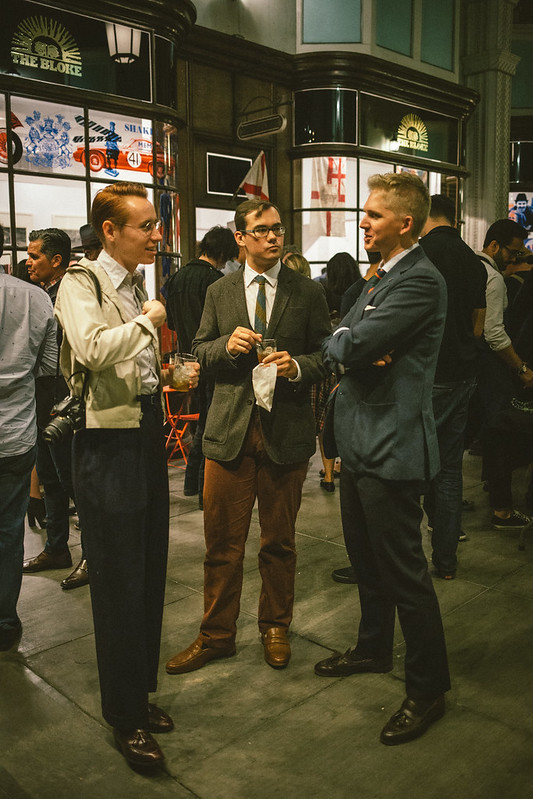 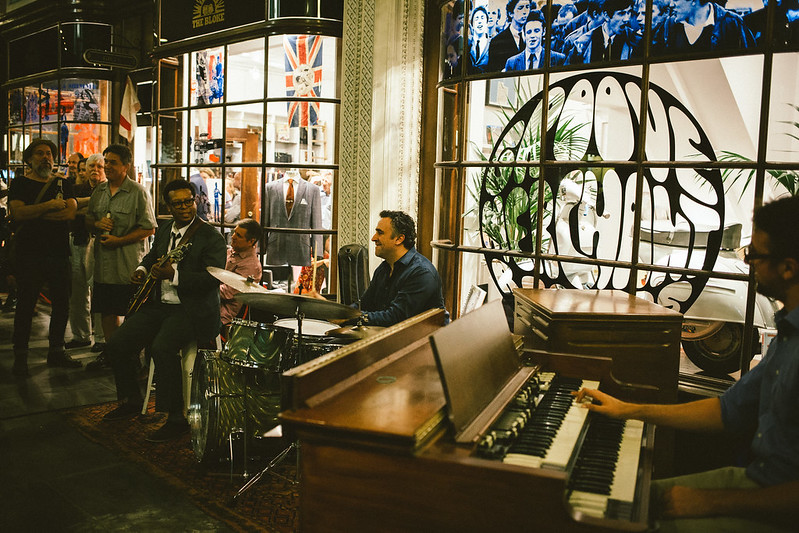 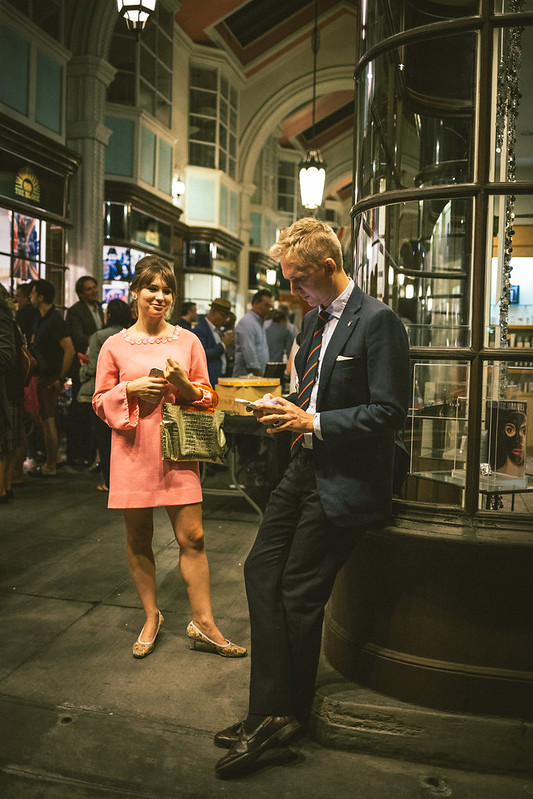 A candid shot with a knowing Rachel. 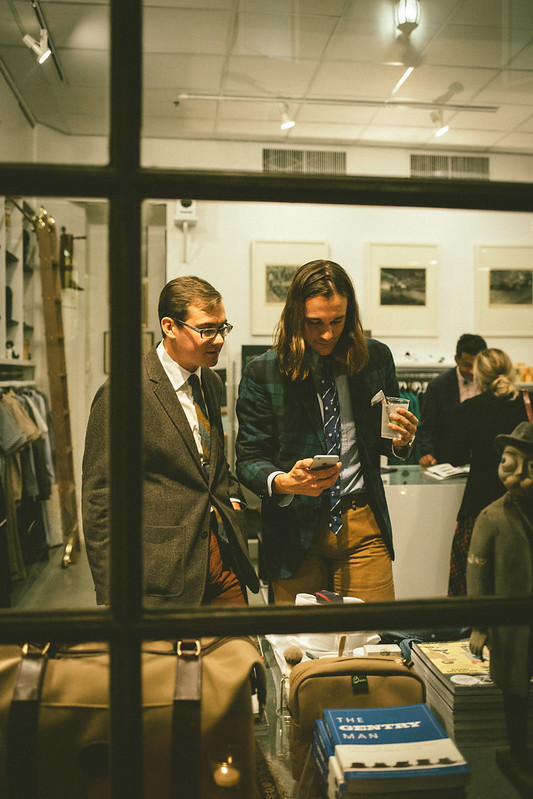 Through the looking glass: Paul and Ryan check out some Drake’s shirts on a table. 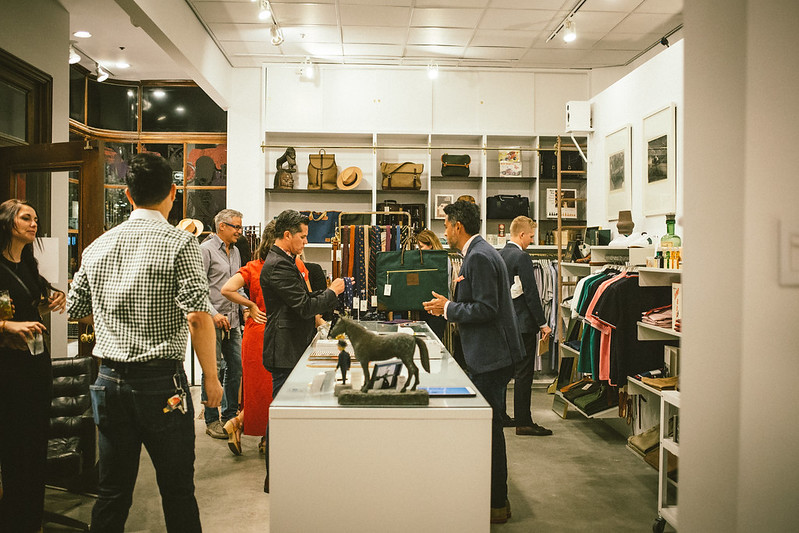 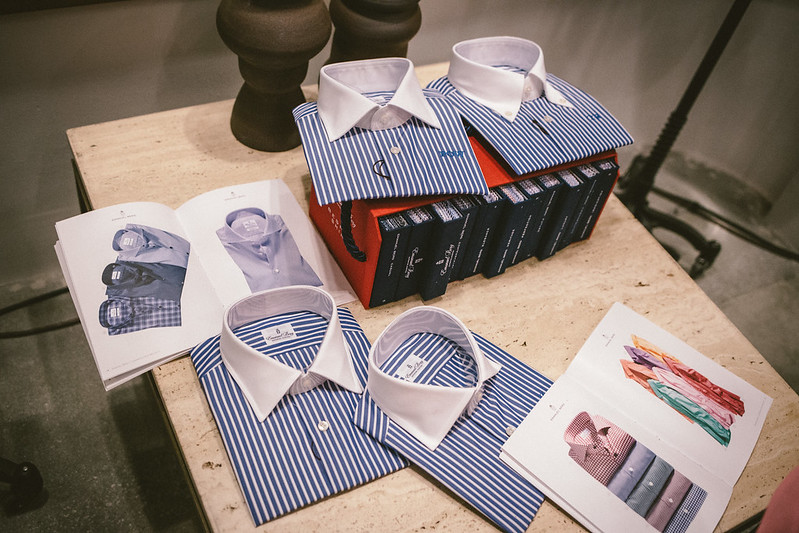 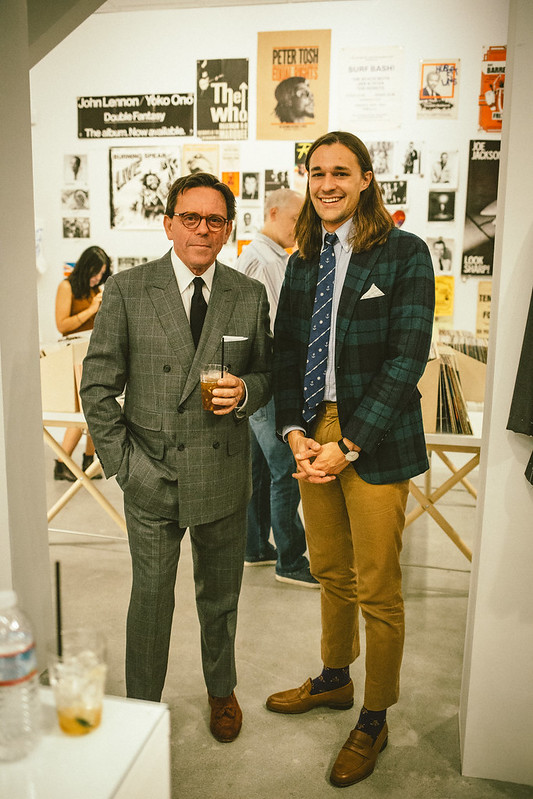 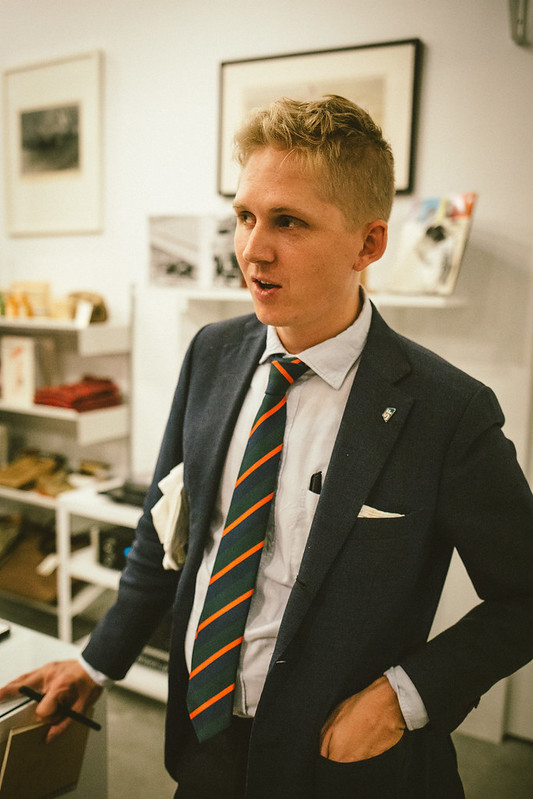 Ryan, speaking to us children. 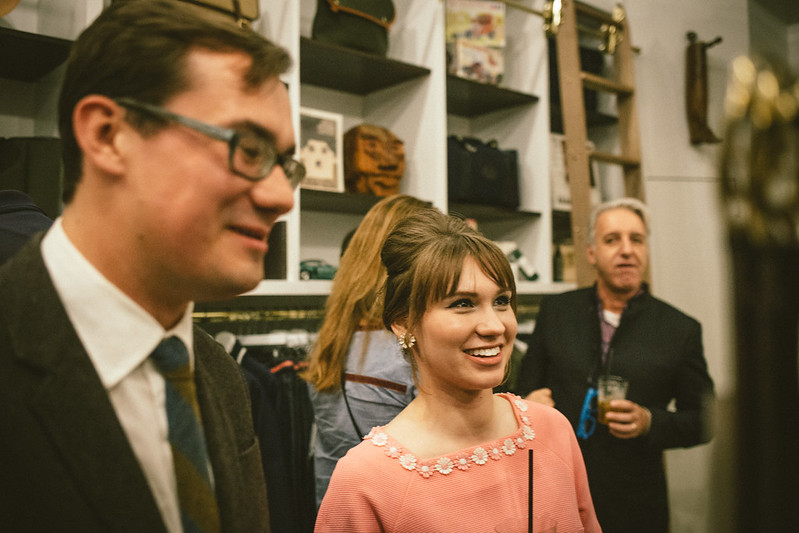 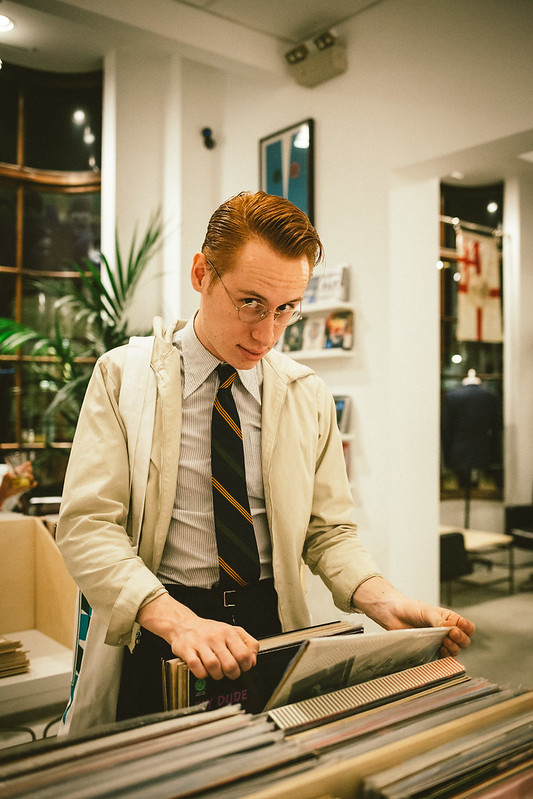 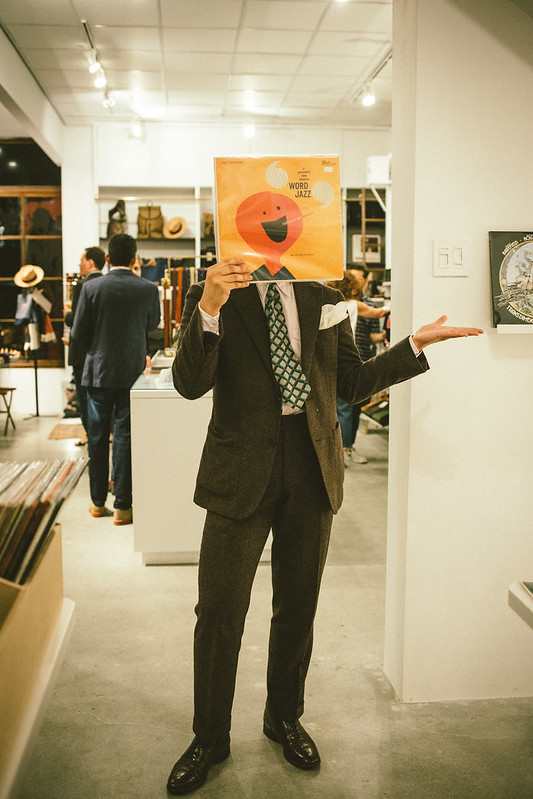 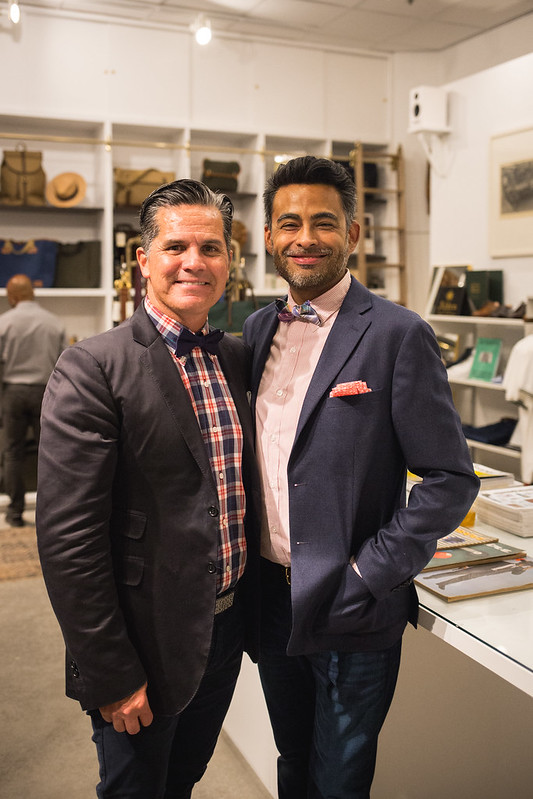 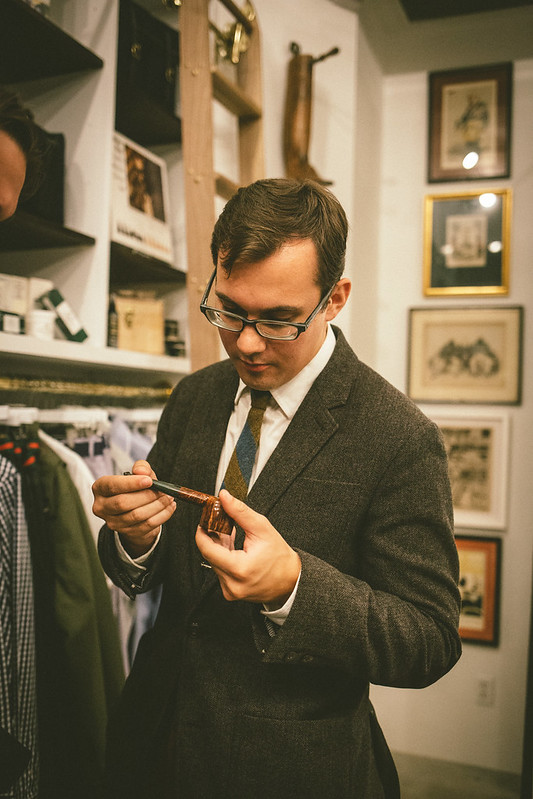 Paul inspecting one of the pipes sold by The Bloke. 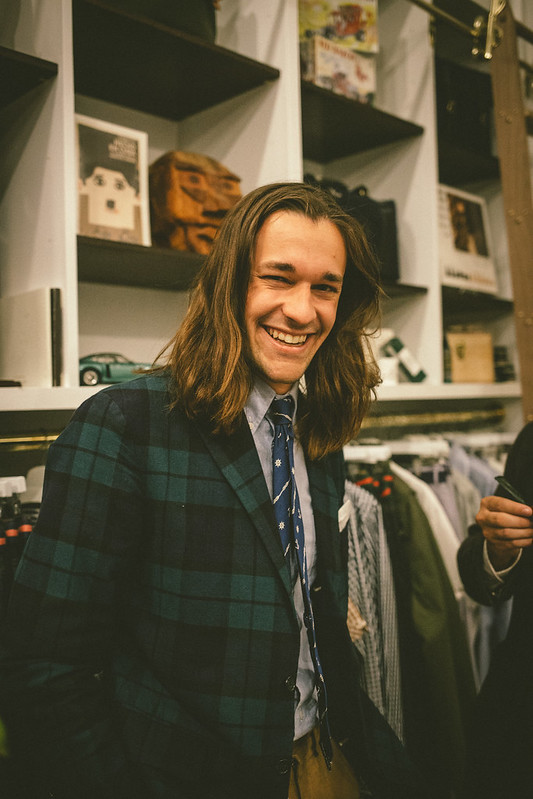 What a winning smile! 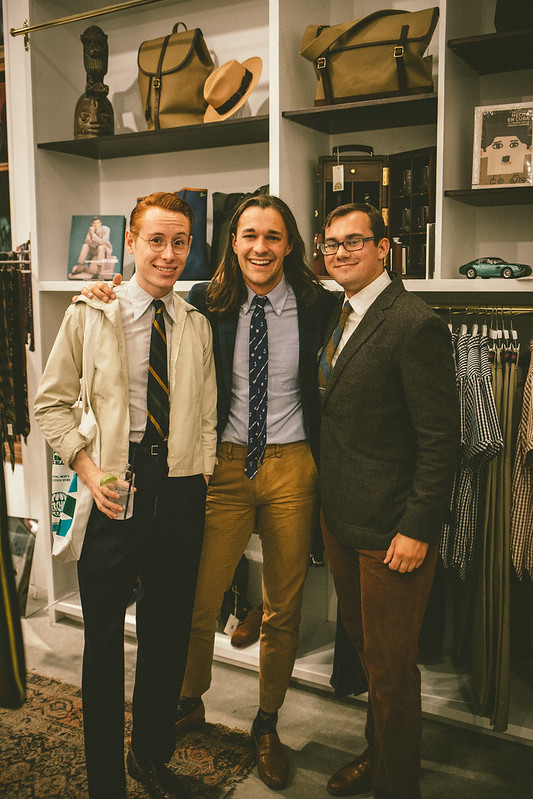 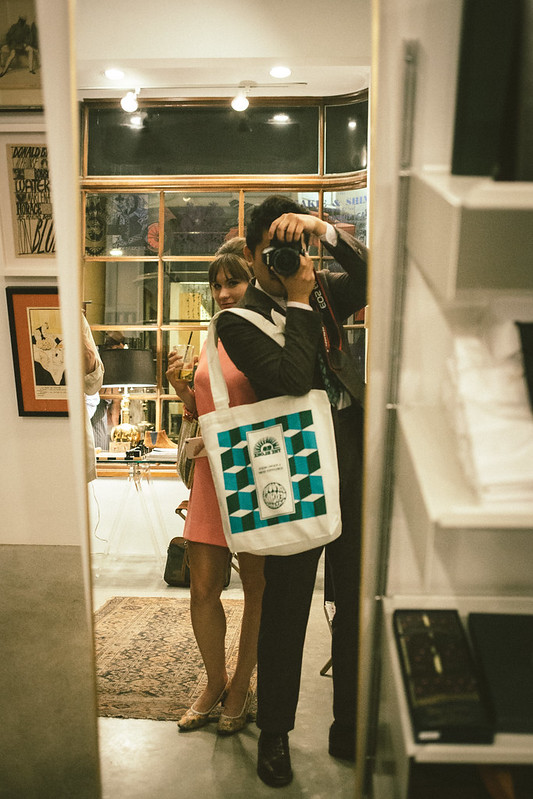 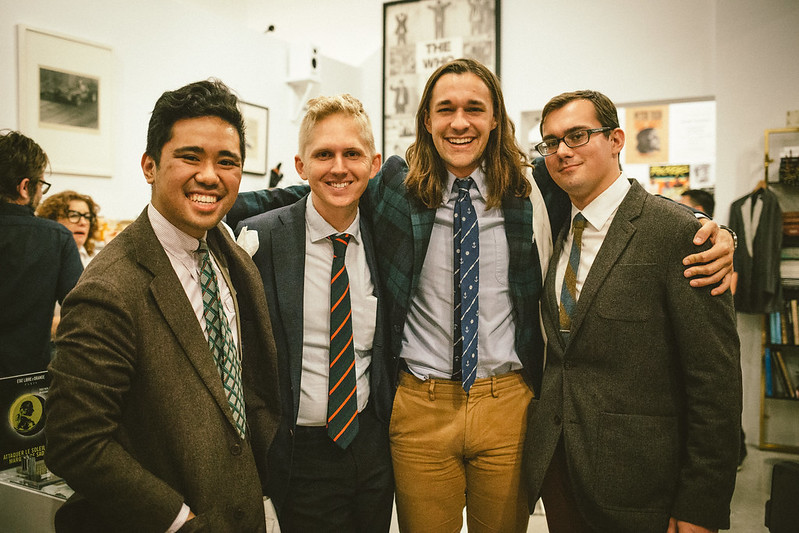 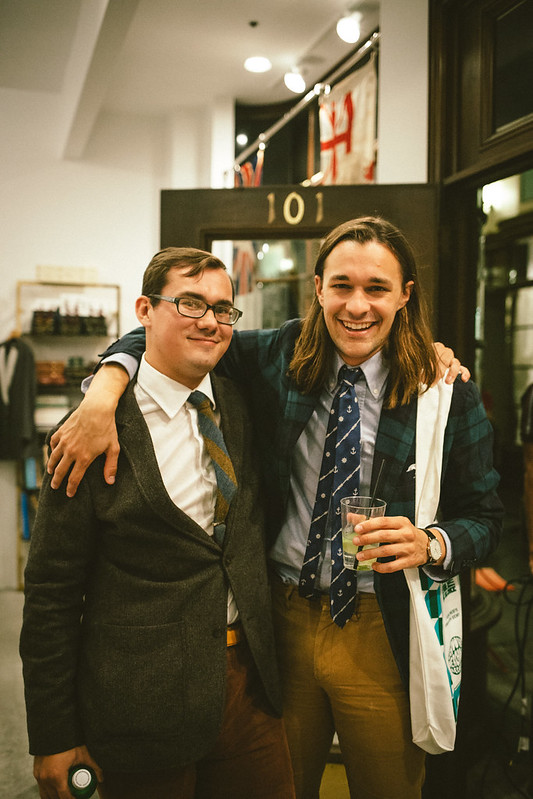 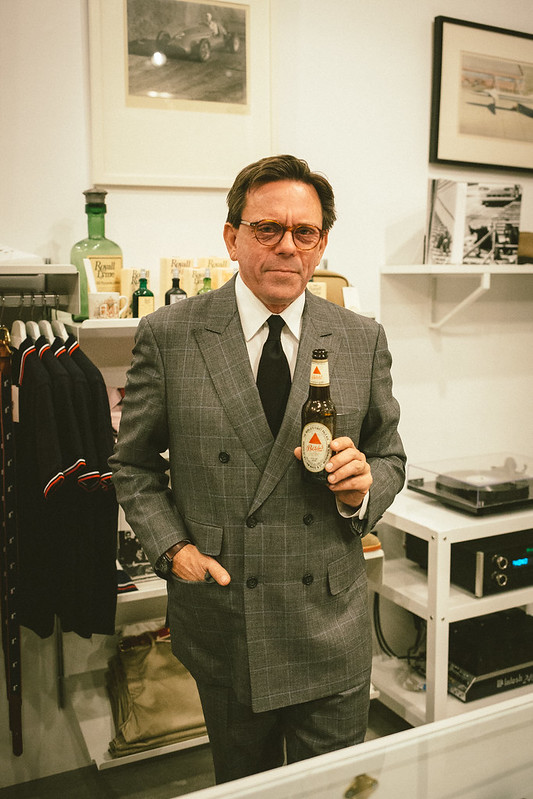 Jeff, taking a well deserved drink as the party ended. 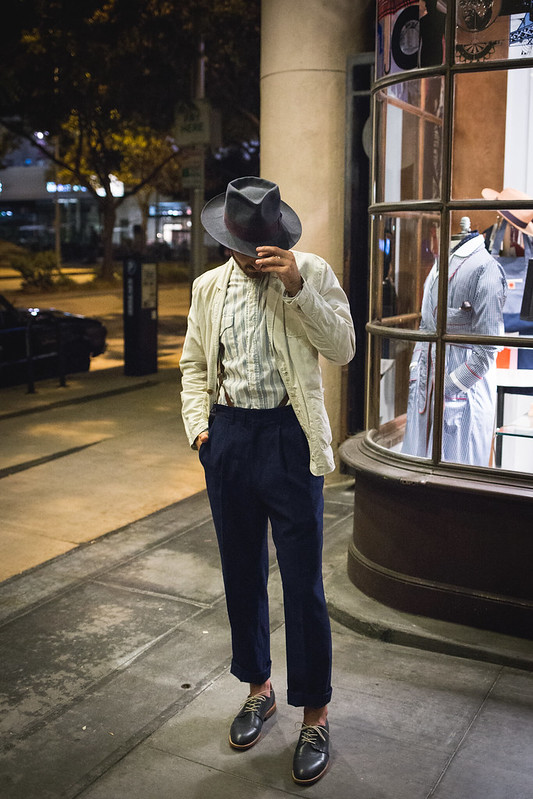 Gotta give my new friend Garret Gooch a shout out for having one of the coolest outfits I’ve seen in a while.  It’s definitely a mix of vintage and modern, with a thrifted cotton patch pocket jacket, a dope 20’s looking striped band collar shirt, and cropped 1940’s trousers with dropped loops.  It’s like something straight out of Inspiration LA!

It’s important to mention the shoes.  These derbies are from a budding shoe company called 2120 where Garrett actually serves as the brand director.  I actually met the team during one of my trips to the Rose Bowl Flea Market! It’s definitely a brand to watch. 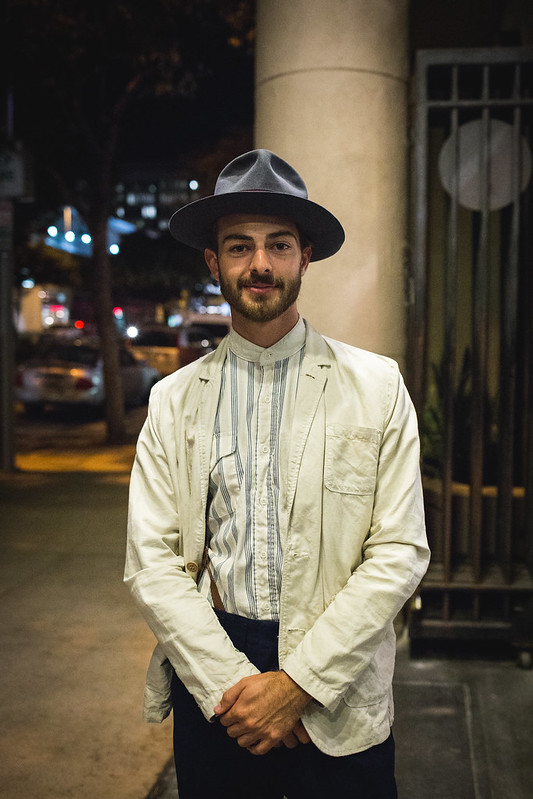 Also, his rare navy fedora was purchased from Benny Reese! 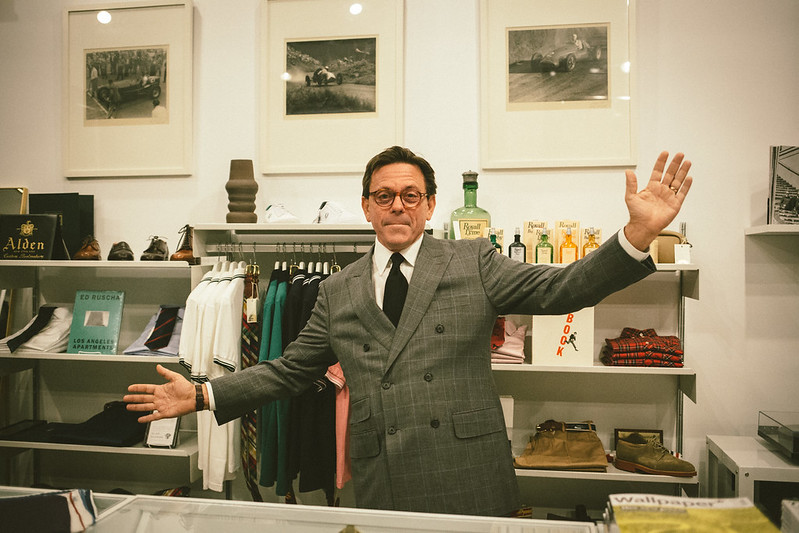 I’ve really gotta say congratulations to Jeffery Plansker.  Not only has he started such a promising new haberdashery in a city where classic menswear is non-existent, but he threw a really great party.  I can’t even remember the last time that I went to something even remotely close to something like this!  Hopefully this leads to an LA menswear renaissance where like minded (and dressed) guys can hang out.  Jeff even said that he was down to host recurring gatherings, so I’ll keep you guys updated on that! I would love to do something and meet some of my readers.

So if you’re interested in grabbing some vintage ties, snatching some records from Groove Merchant, or just leveling up your style (with great brands like Drake’s, Alden, Tellason) you’ve gotta visit The Bloke .   Even if you don’t buy anything, it’s worth it just to talk to Jeffery!

The Bloke is located at 380 S. Lake Ave., Pasadena, CA in the Saville Row-esque Burlington Arcade and is open Tuesday-Saturday 10AM-6PM and Sundays 12-5PM.