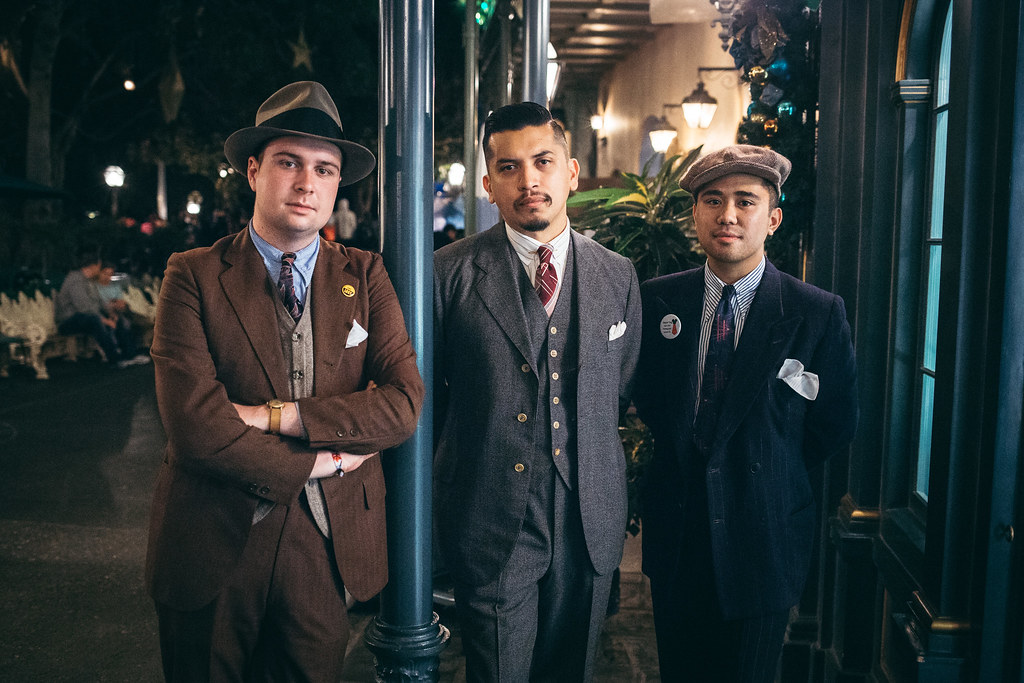 After the expo comes to the true Dapper Day event: stepping out in style at Disneyland.

Let’s get a little recap. Dapper Day creator Justin Jorgensen was inspired to start the event when he was looking at Disneyland concept art from the 1950’s.  While a ticket may have been cheaper than it is today, families and youths back in the day treated a Disney trip like a real event.   Men wore suits (or sportcoats) and women wore dresses; you can even see this in old pictures!

Now, you don’t have to dress vintage for Dapper Day.  In fact, I distinctly remember that they advocate dressing in modern, vintage, or chic.  However, I’ve felt that  the classic and vintage menswear representation has been declining, as most men opt for the “dapper day uniform”, which consists of clip on suspenders and a bowtie.  I’ll be honest and say that not the biggest fan of the look, especially since no one dressed like that back in the day.  I mean, the clear easy way to do a vintage look is to wear a striped shirt and patterned tie!  It also seems like the vintage community has abandoned the event, due to the proliferation of this look.  However, none of this stops Spencer and me from going to Dapper Day twice a year and having a great time with our friends.

But honestly, the “dapper day uniform” isn’t a big deal.  I mean, at the end of the day, you’re just going to Disneyland with your friends! If that’s what you want to wear and what you feel comfortable in, then all power to you!  I’d prefer everyone dress for fun rather than feel trapped by a dress code.  It may not be vintage or classic, but I can see how much fun people have on Dapper Day! Hell, my friends and I are probably the weird ones of Dapper Day now since we’re the only ones who are actually wearing full suits and ties.

So scroll down and see what your favorite menswear nerds wore to Disneyland.  It’s one of the best dressed ones so far. 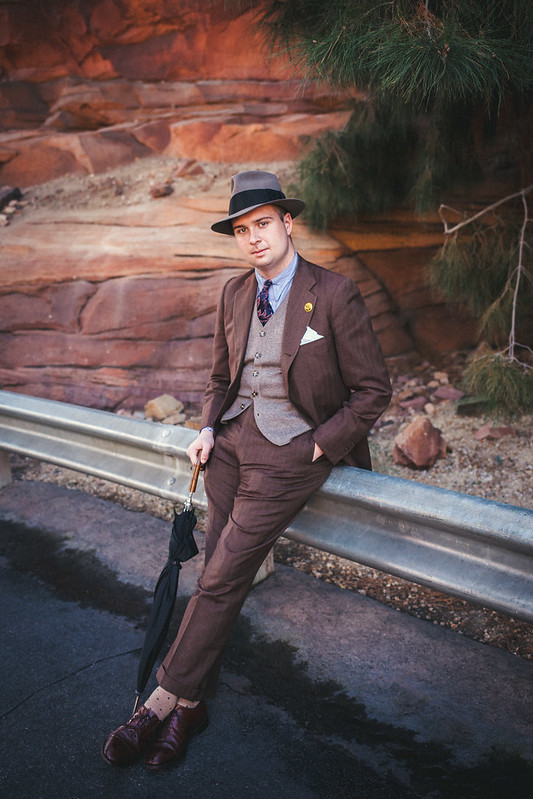 Spencer wanted to go for a 1930’s ivy inspired outfit, which is pretty much what I try and dress like everyday.  It actually contrasts sharply with his outfit from the Expo, where he wore a bold 1940’s plaid suit!  For a day of walking around Disneyland, he wears a brown sack suit with a light brown sweater vest.  You might recall that this suit is a 1960’s Brooks Brothers sack suit, but the design and cut is literally timeless.   Finding a BB sack suit made before  the 1970’s will allow you to do a multitude of looks. 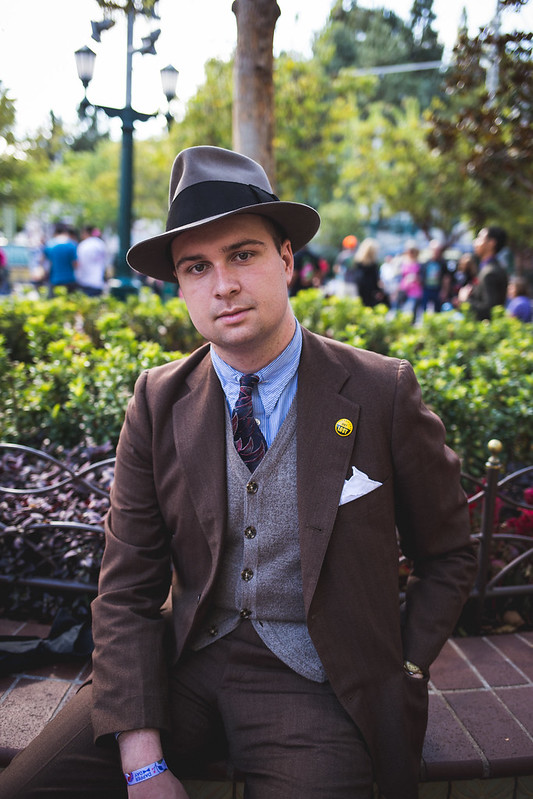 During our menswear presentation, we repeatedly said that details matter.  I mean, it’s literally the key to pulling off a vintage outfit! His pairing of a beautiful abstract  design 1930’s brocade tie with a pinned, blue spearpoint collar (our signature shirt) could be the poster child for this blog.  You can’t expect just to wear a suit (let alone a vintage) one and expect to look vintage right away!  Spencer’s styling turns his outfit into a dead ringer for something you’d see in the 1930’s. 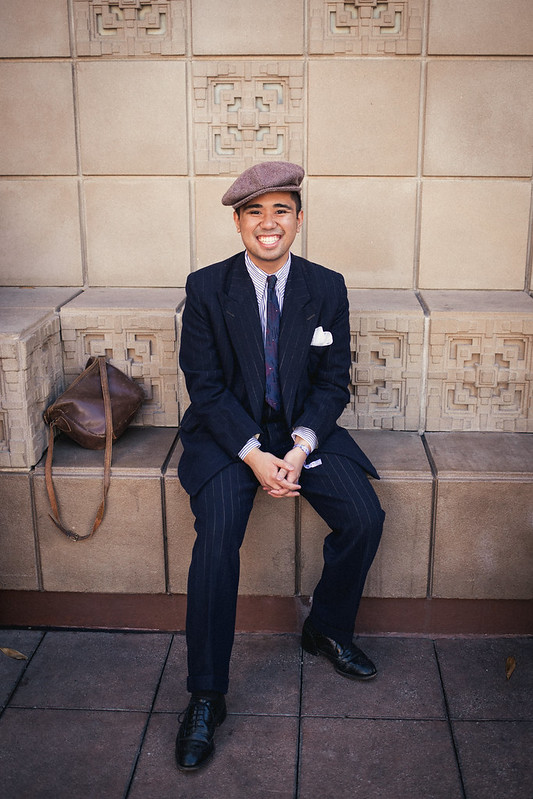 I’m pretty much the opposite of Spencer today.  I ditched my ivy look (which is pretty versatile and not too vintage) from the Expo and went with something that screams 1940’s: an English 1930’s 4×2 DB suit with a striped spearpoint collar and abstract brocade tie.  Yeah, it’s something pretty bold, but that’s typically what I do on Dapper Day.  I don’t get to go to Pitti, so I gotta get my peacocking in somewhere! 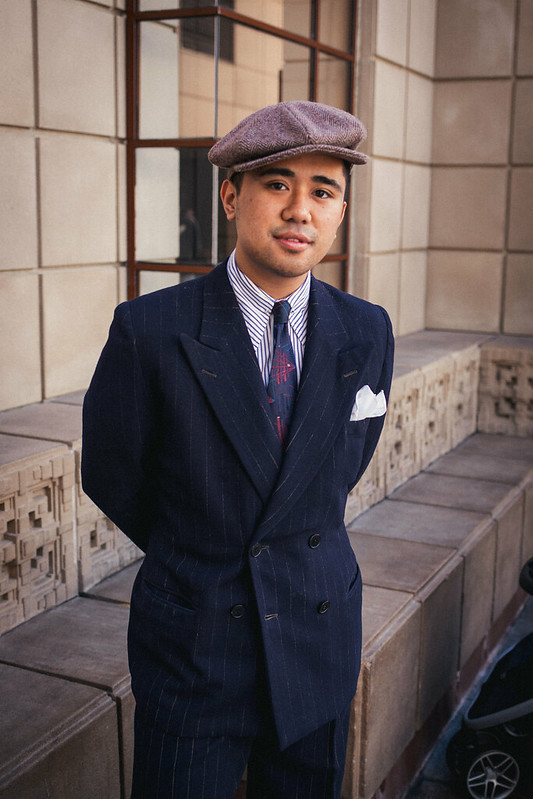 This suit is pretty awesome.  It’s got that quintessential drape cut with broad shoulders and some great hourglass figure.  Compared to other DB’s of the era, you’ll notice that the lapels are smaller and that the buttoning stance is pretty low (but doesn’t descend past the pocket line).  It also lacks the decorative “chest buttons”!  Big thanks to Benny Reese for selling it for cheap.

The cap is a brown tweed piece made up by Damian of Monsivais & Co.  It’s actually Spencers, as we swapped hats at a whim during the beginning of our day.  I originally was going to wear that grey fedora (made by Cody Wellema), but I felt that a fedora with a pinstripe double breasted suit would be a bit much.  Adding the cap turned it into a more “sporty” outfit, something that I never do!  It was Dapper Day, after all, so why not?

I also want to point out this dope 1930’s tie that I got from Spencer Stewart (the Vintage Haberdasher).  It’s got this weird, abstract design that reminds me of Star Wars; perhaps it’s the grid like lines that run through it?  Either way, it was worth the $30 or so that I paid for it.  Honestly, it’s a little higher than what I’d normally pay for a tie, but this wasn’t a simple repp stripe or a foulard.   It’s a little bold but perfect for Dapper Day. 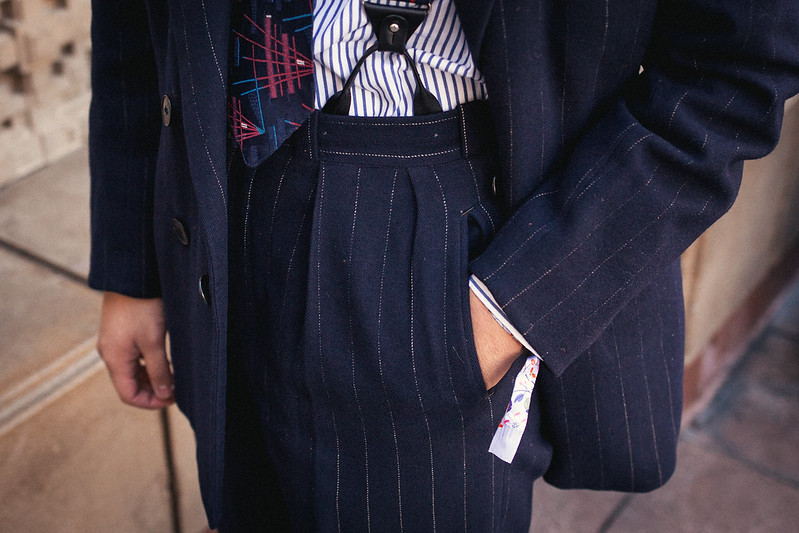 My last gush over this suit will be about the trousers.  It’s hard to see here, but the trousers feature an extended tab closure, double shallow forward pleats, and side tab adjusters.  If you scroll up to the first picture, you’ll also notice that the trousers aren’t too wide! I may just add the trousers to my ever growing list of bespoke recreations. 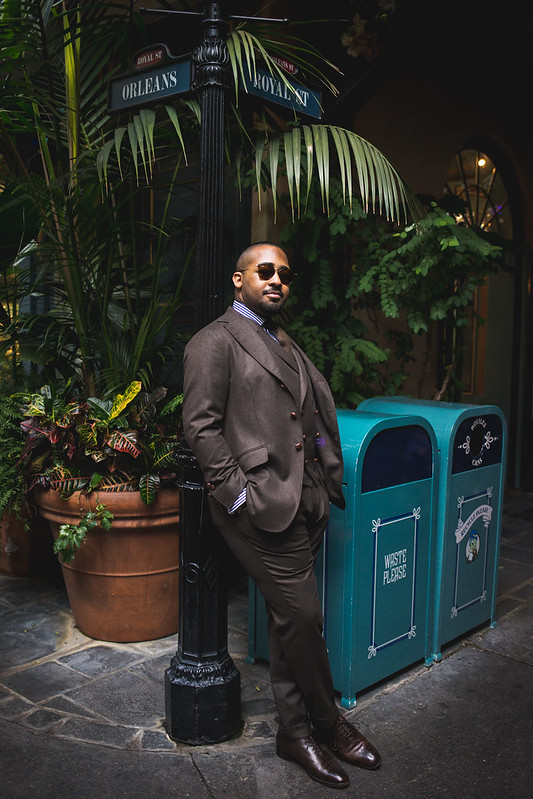 Juliano brought out the big guns for this Dapper Day.  He isn’t wearing anything vintage, but he didn’t have to in order to look good! Using his employee discount as a MTM specialist for Beckett & Robb to make this amazing three piece flannel suit.  The waistcoat is double breasted, the pants pleated, and the jacket is an unstructured 3-roll-2.  Could there be a more perfect “Ethan” suit?  Juliano told me that it feels like wearing a cardigan or a nice pair of pajamas as a suit. 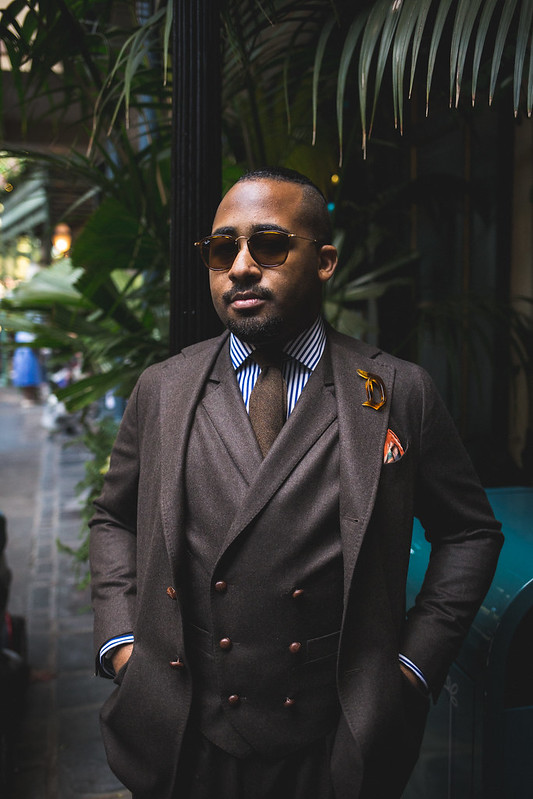 Great use of an orange pocket square.  Perfect fall accessorizing!

Leather buttons were an interesting touch, but certainly appropriate for his suit.  He actually told me that all the buttons were leather, including the trouser pockets.  I can’t imagine how it feels to sit!

While he hung out with Spencer and me, Juliano let us in on his upcoming commission for the next Dapper Day (which is due in Spring 2018): an unstructured brown prince of wales check linen suit.  I think it’s just amazing that a guy who enjoys classic menswear/tailoring as much as we do also makes a point to have fun on Dapper Day.  I literally can’t imagine any others from this niche group doing the same thing! 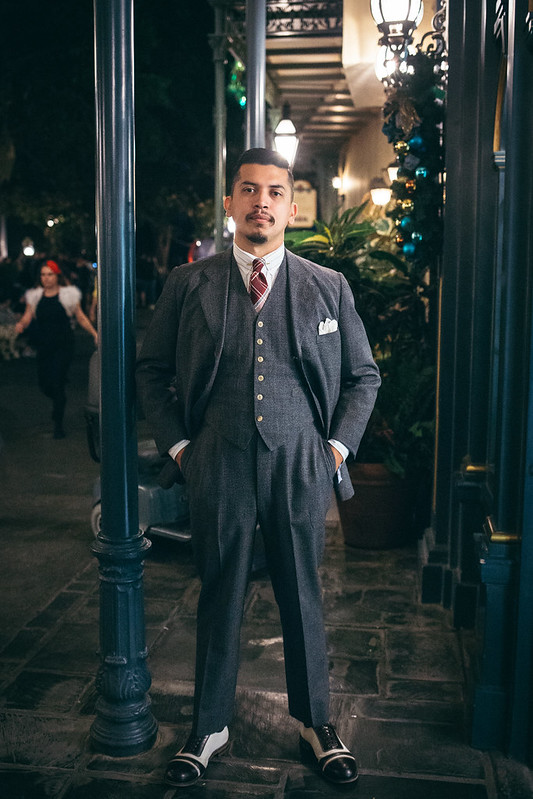 Man, I remember when I first took Adam’s picture. It was taken way back in Fall 2015 during my first ever Dapper Day article.  At the time, I didn’t know his name, but I did see that he was wearing a perfectly tailored green tweed norfolk suit.  Two years later,  he and I are friends who can talk vintage clothing and the latest Snoke theory.

He wears a dated 1937 three piece suit that he got from Roxy’s Vintage Deluxe, the costuming warehouse where I obtained my brown grail suit, my 1940’s summer sportcoat, and my countless sport shirts.  Adam said he got the suit for around $350, which is perfectly worth it considering the condition and the fact that it didn’t need any alterations. 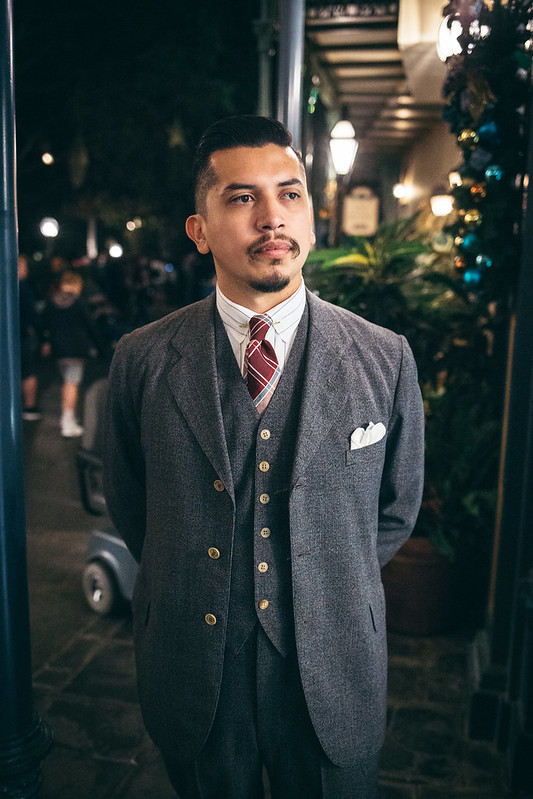 One thing I noticed right away is that his shoulder’s don’t seem to be padded!  There is some slight waisting in the jacket, but it isn’t as aggressive as other mid 30’s jackets.  It may just be an outlier or just proof that not all tailors and manufacturers followed the trends of each era!

Don’t forget to take note of those buttons.  The contrasting yellow-tan buttons go great with the blue-grey fabric of the suit.  You don’t really see buttons like this on suits made today! Most of the time you see dark buttons, unless it’s a bright summer piece.

Lastly, I want to point out that Adam isn’t wearing a spearpoint collar.  The good thing is that he doesn’t need it. Even with a  short, contemporary collar, the wide stripe and use of a collar bar makes it look vintage.  Adam even gets bonus points for pairing this striped shirt with a 1940’s boldly checked tie.  Are you finally seeing that a striped shirt and patterned tie can make a vintage look?

We finish off our coverage with random, fun shots that Spencer and I took while we walked around Disneyland and California Adventure.  There really isn’t much to recap as it literally was a normal day at Disneyland, just with Spencer and I dressed in vintage.  Some people did take pictures of and with us, but other than that, it was a pretty chill day! 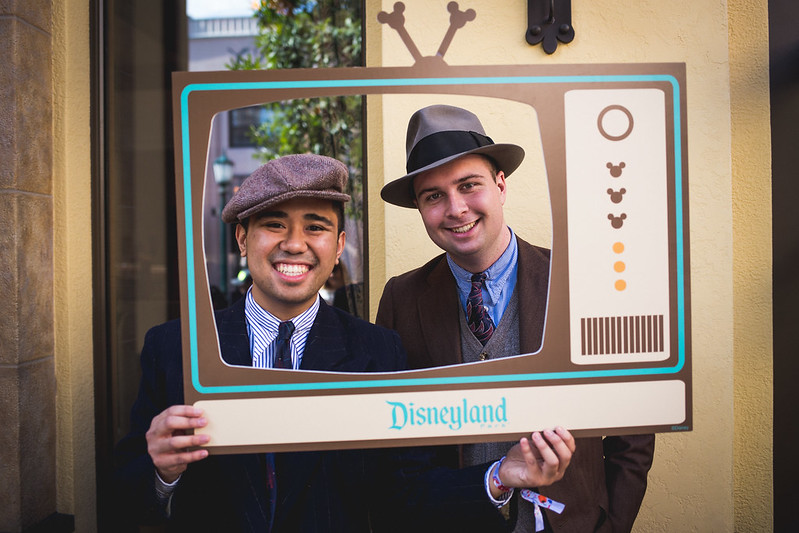 The #sadboys are on TV! 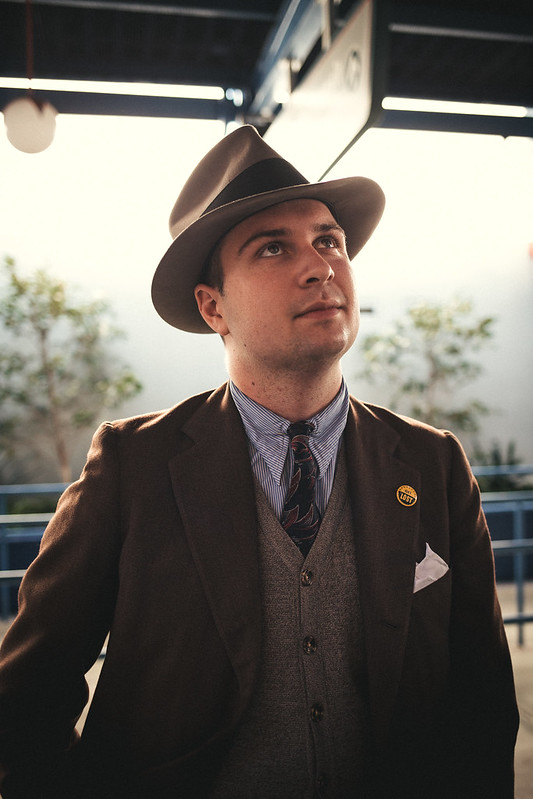 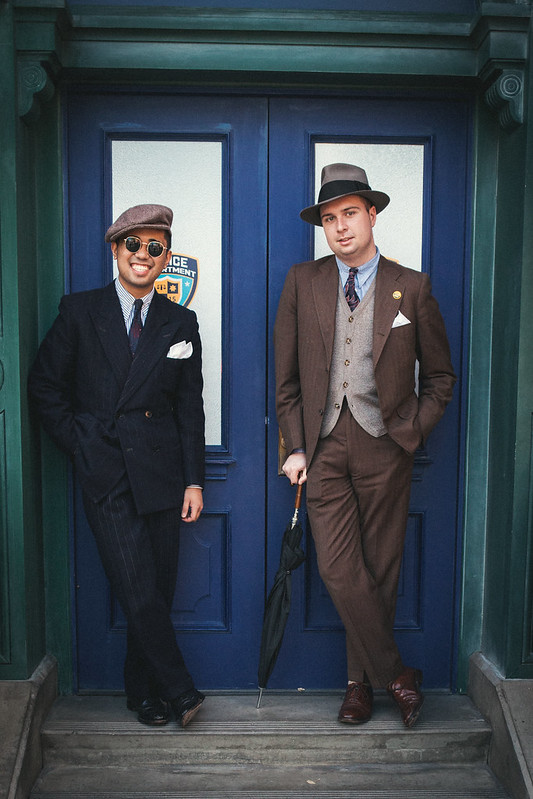 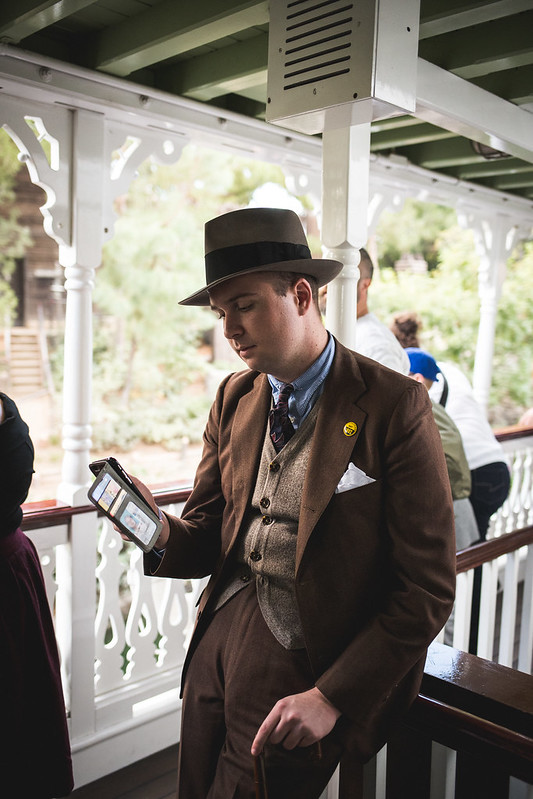 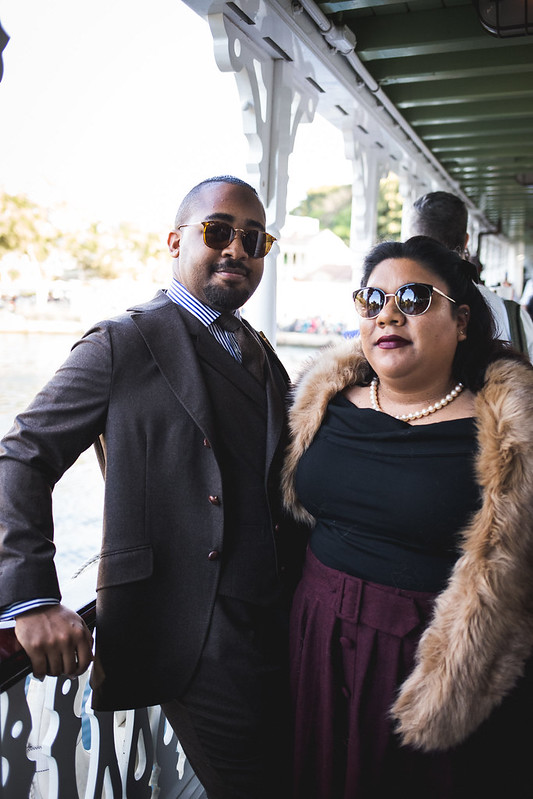 Juliano and his lovely wife Erika. 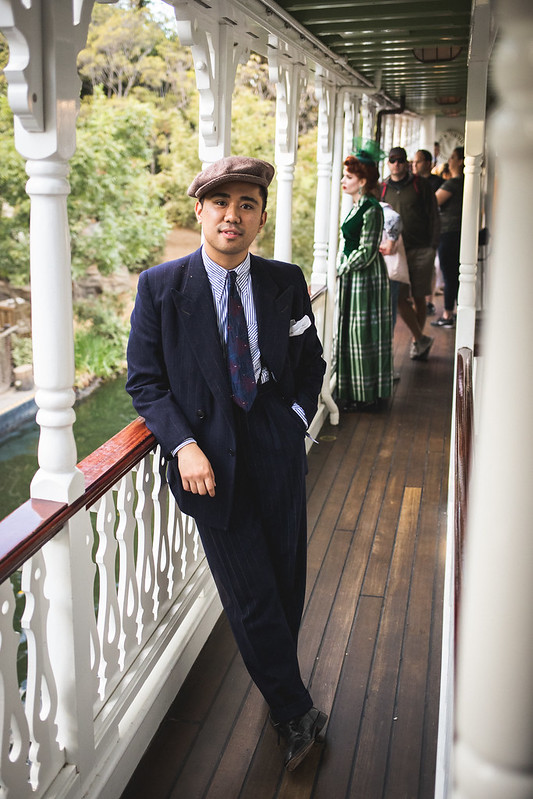 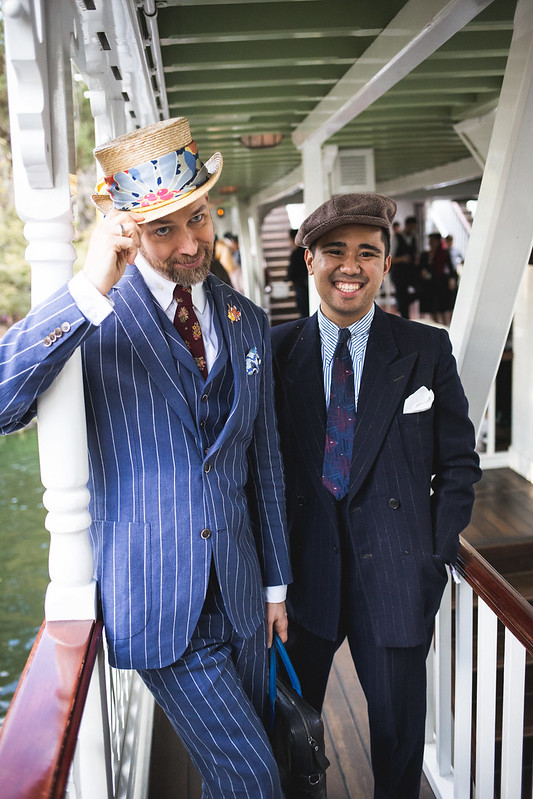 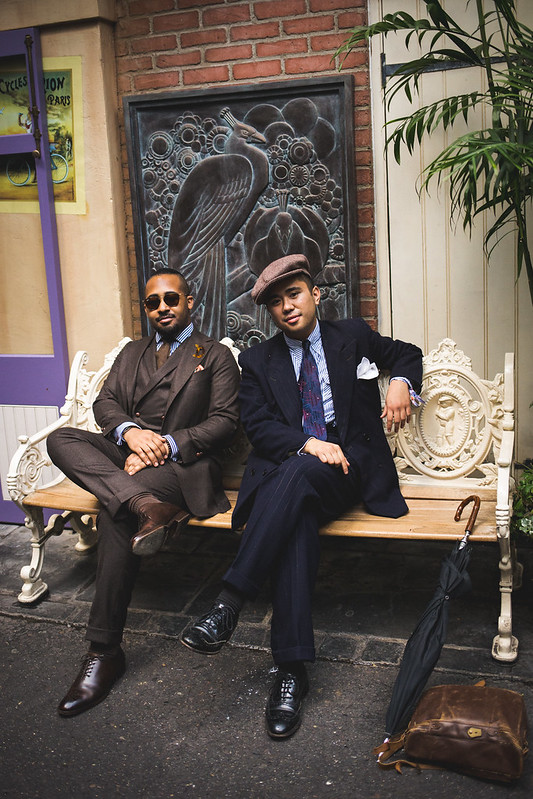 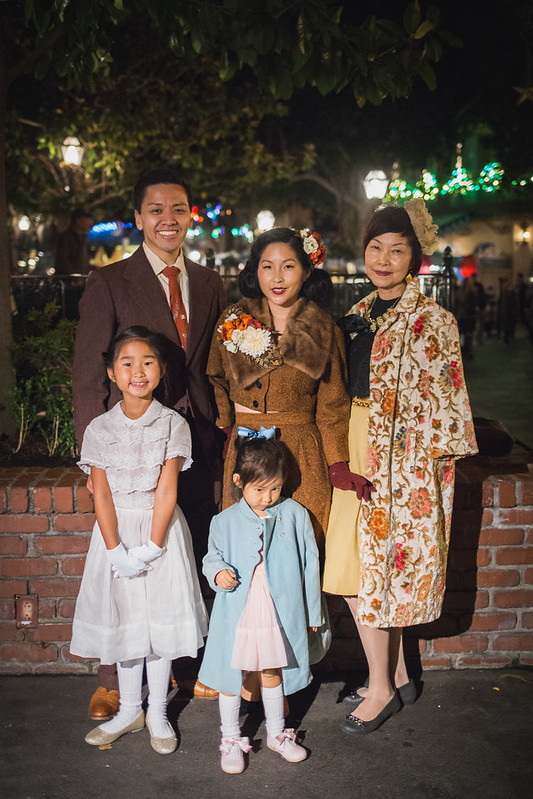 Linda and her lovely Dapper Family! 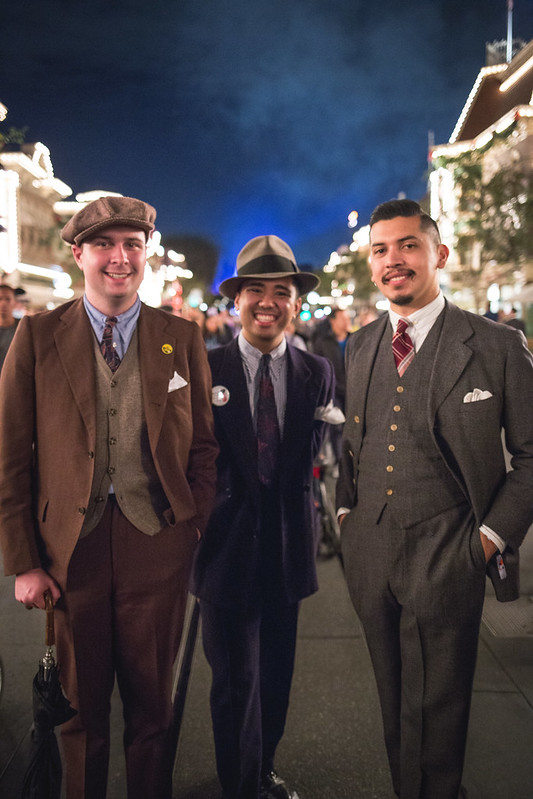 I’ve gotta say that I’m proud of all of our looks.  We may be the oddballs at each dapper day (and getting more and more obvious with it, as we lack a big group), but I think it’s worth it to attend the event in attire that we feel comfortable in.  I mean that’s what the other people do, right?  Plus you never know who might be curious or interested in your outfit.   If it wasn’t for a chance encounter with some vintage people during my first Dapper Day, I don’t think I’d be where I am today.  I can only hope that maybe we can do the same thing for another casual attendee for Dapper Day.

Now begins the wait period until the next Dapper Day, which is set to be sometime next spring.  If we have enough interest and planned accordingly, perhaps we would be able to bring our fun Expo squad into the actual Disney Parks! I think it would be a fun time (and would allow us to fully bring back classic menswear to Dapper Day), though it may be difficult since Disneyland Park Hopper tickets are getting more and more expensive.  I’ll leave that discussion up to you guys.

Be sure to join our Facebook group to join in the conversation and don’t forget to subscribe to our bi-monthly podcast! Our next episode will be a candid conversation about Dapper Day.