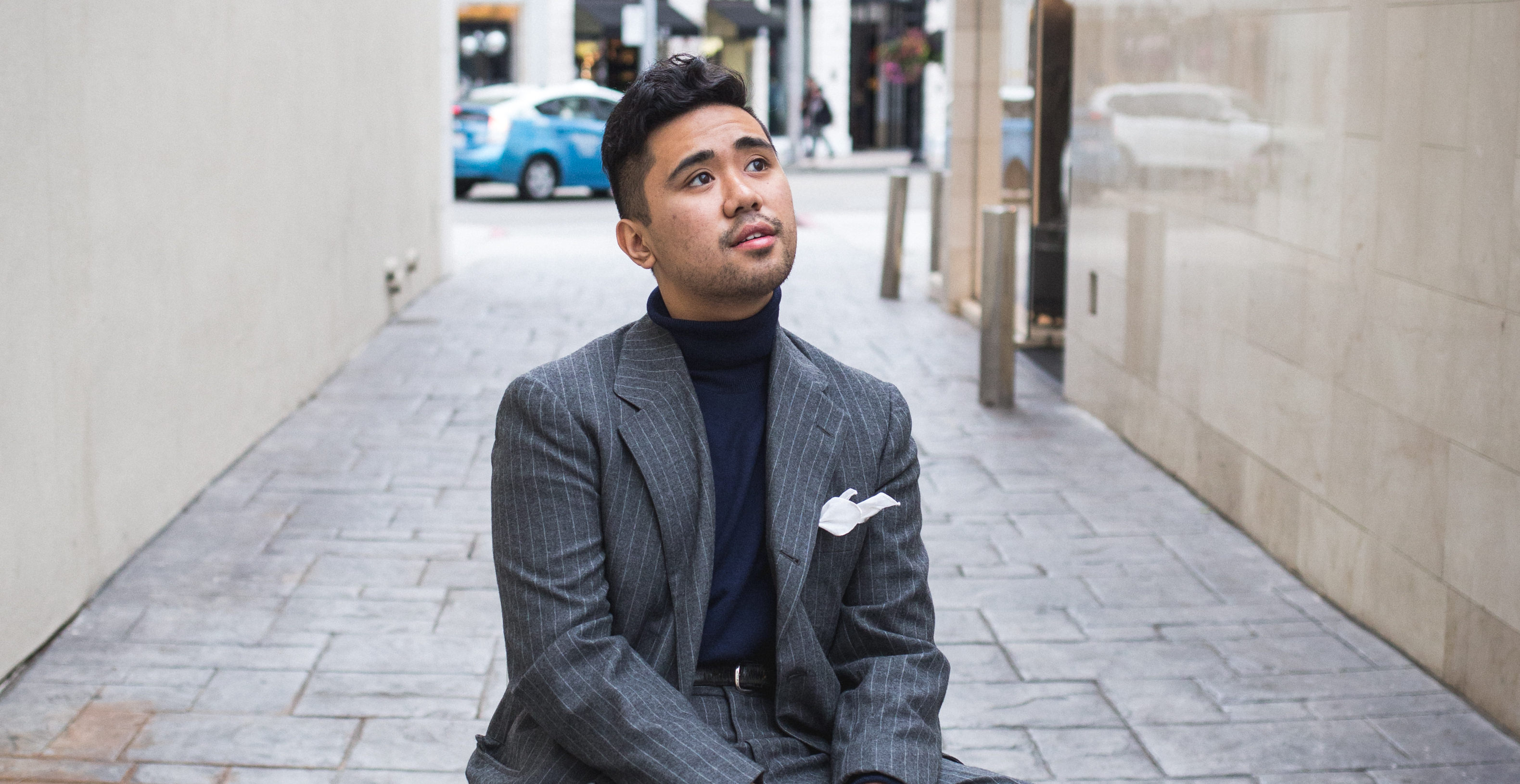 It’s taken 11 months for the LA weather to hit under 70F, so that means it’s time for actual fall/winter outfits.  And what better way to do it than to bring back the Rollneck sweater.

Rollneck (or turtleneck) sweaters are one of the most functional garments you can own.  Obviously, the neck portion (which is doubled in rollnecks, hence the roll) actually provides warmth.  It’s been around for a long time, as thick ones worn by nautical gentlemen or as thin fashion-y ones for movie stars, and it’s still incredibly classic and cool. We’ve written about them countless times before, but I thought it was time for a new article.

It’s been coming back in past 5 years (no doubt due to the menswear renaissance), but I mostly associate them with the 1960’s Mod Style and the stereotypical attire of psychologists.  And I love both of those looks.

Wearing a turtleneck is easy, akin to wearing a plain OCBD, since it’s one solid color and covers your entire torso.   It may be my personal opinion, but I think it’s slightly more formal than an open collar shirt,ob since it also covers your neck; the resultant look is “closed off” which is what I associate with a formal look.  There’s no need to wear a dress shirt underneath (though some people do that), so I’m usually more comfortable wearing a rollneck since it’s less layers than a shirt + sweater combo, especially if you count the undershirt.  Also, color plays a big role in creating an outfit with it.  You can either go with full saturation or pick something more understated.

I really do think that a rollneck can go with everything: a DB Suit, a sportcoat combo, or even with a leather jacket.  I definitely suggest going with a soft, lightweight merino wool or even a cotton, so it feels more like a heated tee shirt instead of a straight up sweater.  I’m pretty self conscious about my neck, so chunky rollnecks aren’t my thing.  A slightly thin fabric with a good fit (not too baggy but not skin tight) makes for a sharp look.  Here are some looks that I’ve had as inspiration! 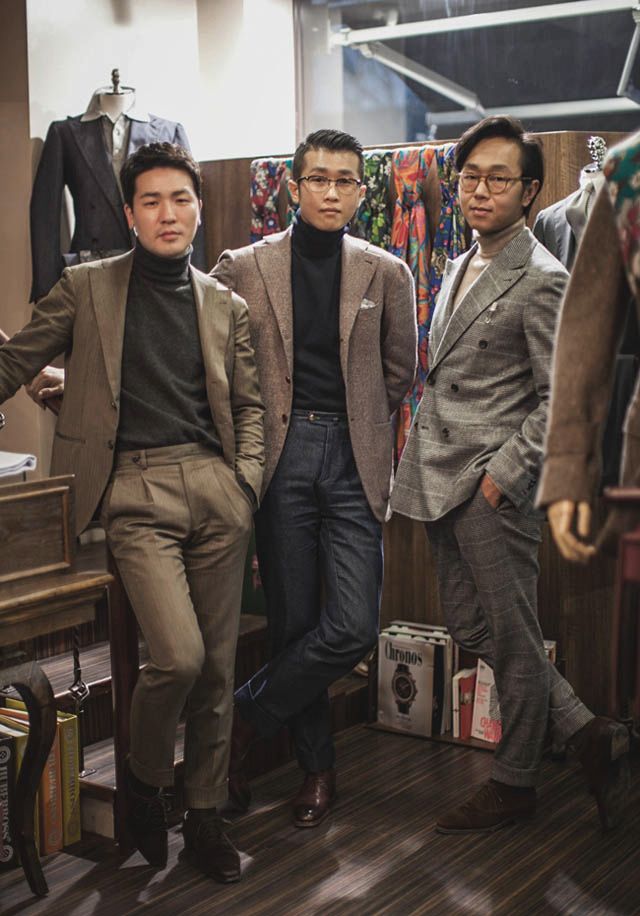 One of the first B&Tailor pics I ever saw!

Charcoal rollneck with grey and brown. Jake Grantham in a raglan coat, tweed jacket, and rollneck. 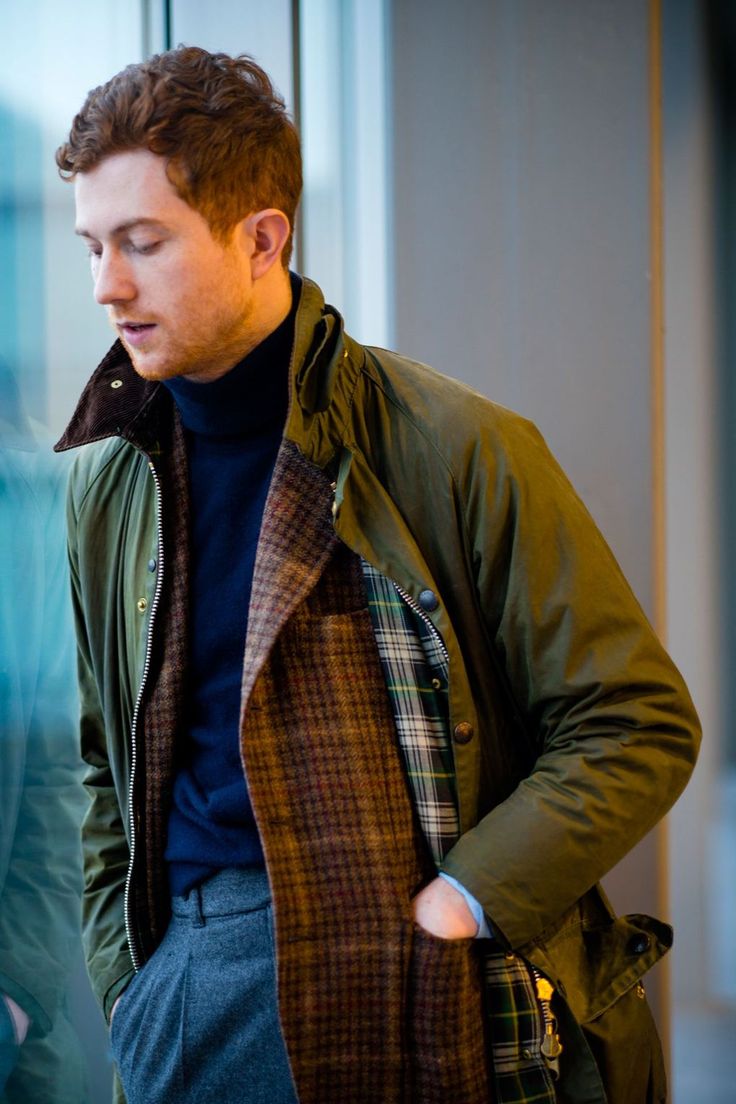 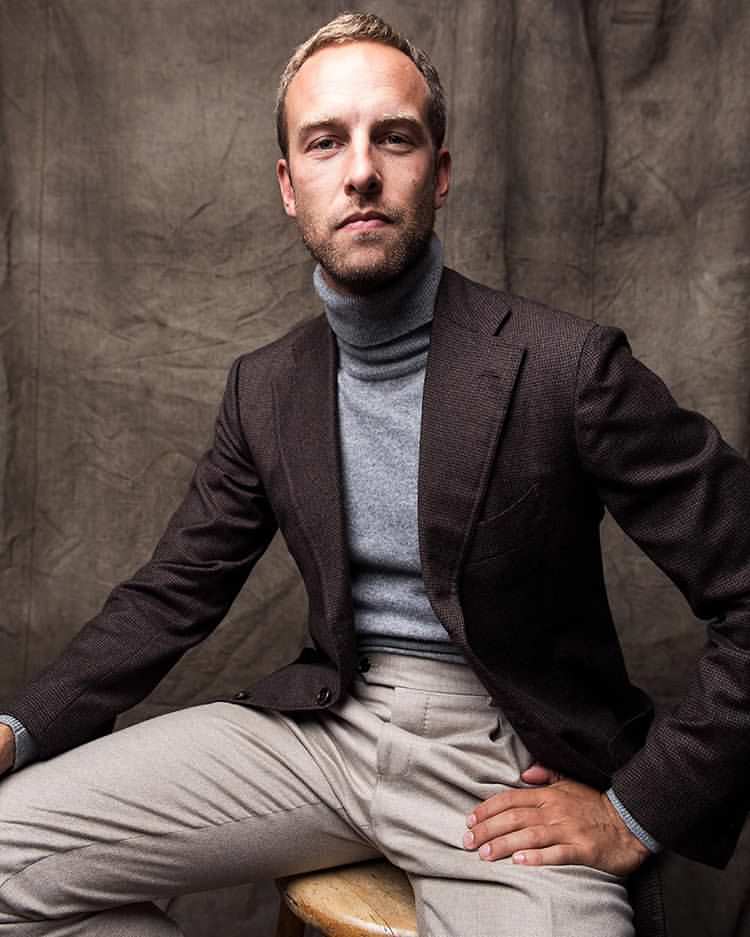 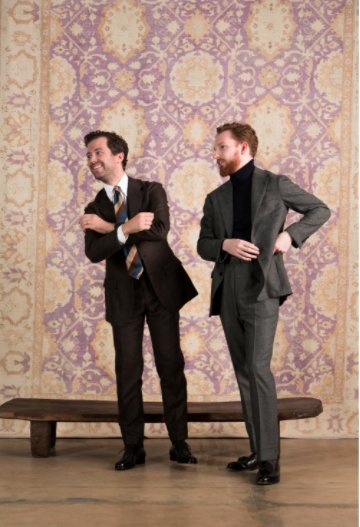 You can always go dark. 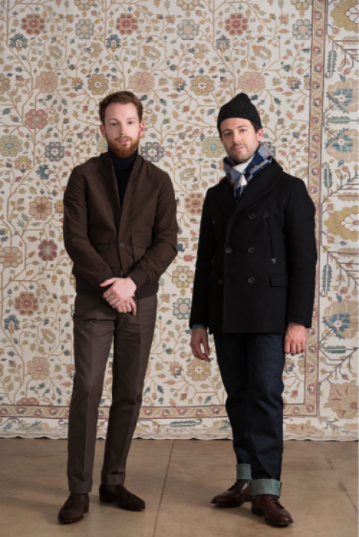 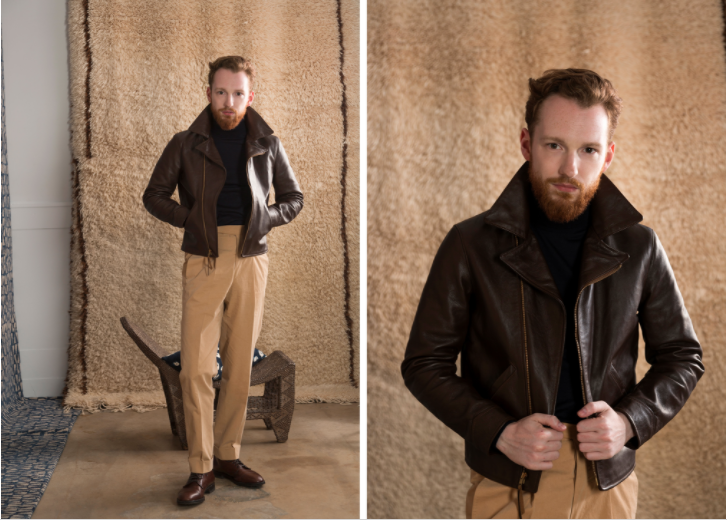 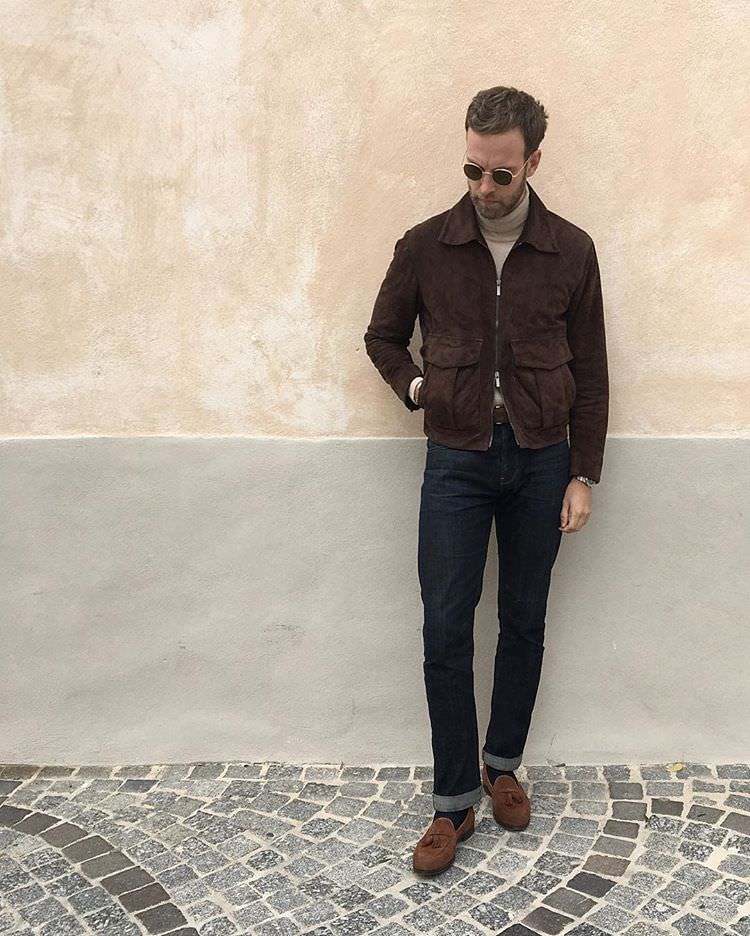 I’ll admit that I got the idea for this post when I was coming up with outfits for a “fit battle” on Male Fashion Advice.  I was going up against some stylish dudes and I felt that “normal Ethan” wouldn’t be good enough.  It was finally getting cold, so I felt that I could give myself an edge by wearing a turtleneck.  Using this piece actually resulted in two different outfits, which then led me to actually come up with more to photograph and talk about! 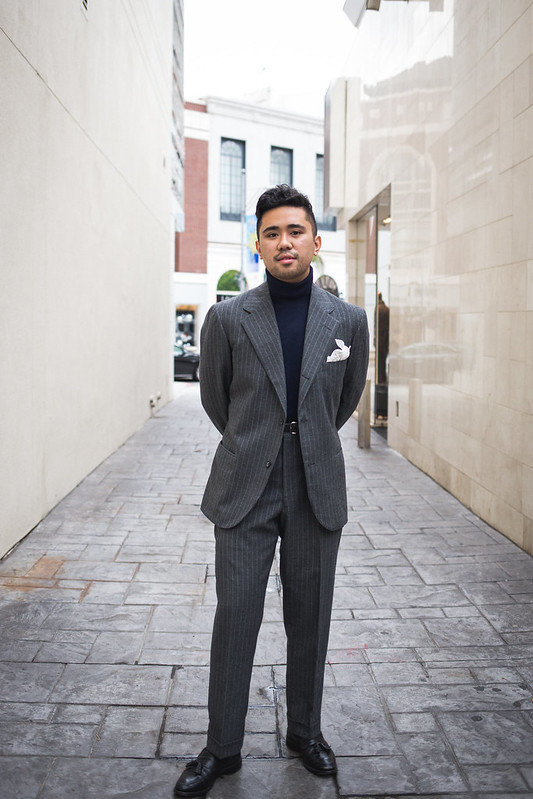 This was my outfit for the second round of that fit battle (which I actually won)  Taking cues from The Armoury and B & Tailor, I decided to pair a navy blue turtleneck with the grey pinstripe suit that I got on eBay for $25.  See what I mean about creating a sleek look that still looks formal?  The navy blue (I prefer this over black, since it’s more versatile) looks clean and contrasts well with the lighter shade of grey on the suit. The white pocket square emphasizes the pinstripes.  A dress shirt and tie combo would still be appropriate, but it doesn’t compare to the sleek minimalism of the rollneck.   Sometimes simple is the way to go.

Also look at that damn tailoring. The suit is from the 1970’s, but it’s pretty classic as it features medium-padded shoulders, a wide lapel, and a 3-roll-2 stance.  I got the jacket taken in and shortened slightly, while the trousers were tapered and hemmed to a slight break.  This particular combo doesn’t look 60’s as much as it doe’s F/W Pitti Uomo! 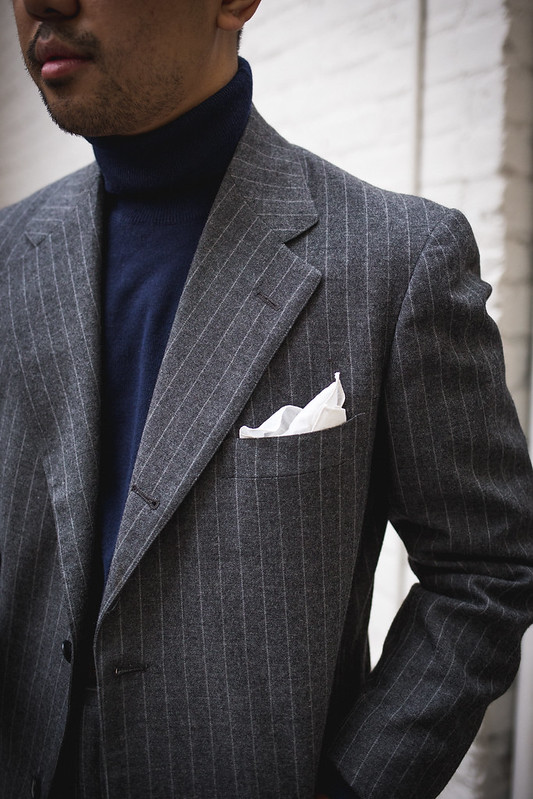 I’m going to go off on a tangent here and say that I love vintage fabrics.  In my presentation, I noted that they tend to be a lot different when compared to modern fabrics.  That’s because contemporary fabrics (at least the common ones) are spun as super 120+ wools, which are very fine.  Loom technology in the past wasn’t as advanced as it is now, so vintage ones are much weightier and have different texture.  I’ve come to prefer this as it allows you to play with garments on a much different level than simple patterns.  I even put that into action here by pairing the semi-smooth merino sweater with the rougher suit. 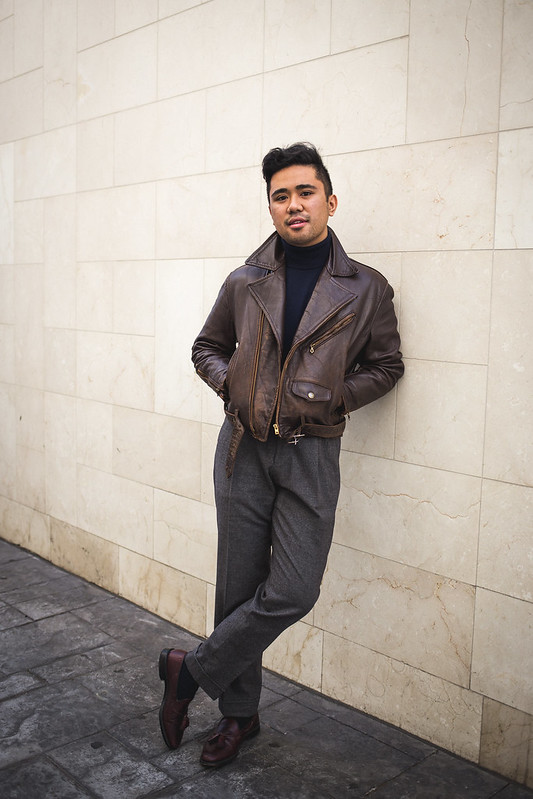 This next look is a slight departure from what you normally see, but I think it’s still perfectly “Ethan”.  I’ve kept the navy rollneck, donned some grey pleated flannel trousers, and finished it off with my 1930’s style biker jacket.  It definitely brings up some of those Jim Parker Armoury Lookbook shots that I posted above, but done in my own way.  Personally I’m not a huge fan of militaristic leather looks (mainly when it’s worn with a white tee and chinos) since I can’t pull it off, but I like how it looks when it’s worn with sartorial odd pieces.  The leather jacket adds a layer of ruggedness to a clean look, emphasized again by the solid, deep navy rollneck. 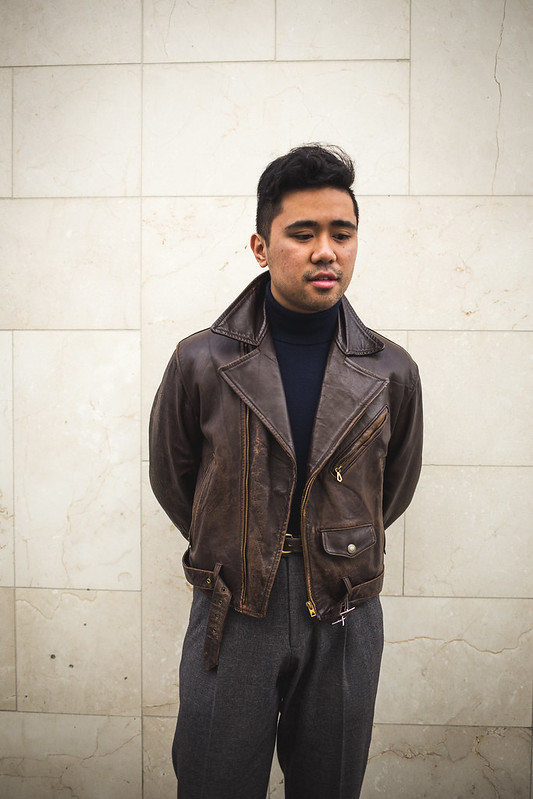 I really do need to write about this jacket.  I think it’s even the first time I’ve worn it in a few months, since it’s been really hot.  You guys may have noticed that I’ve worn linen chorecoats as my “rugged outerwear” this past summer, but I’m really excited to do more looks with this jacket. Instead of the slouchy, workwear look of the chorecoat, this biker jacket gives off amore badass vibe.  I can definitely see myself repeating this look.

Also note the cropped length of the leather jacket.  Jackets back in the day were meant to end right at the waist, which means that if you get your hands on a pre-1960’s jacket, you’ll need high rise trousers.

Sportcoats are a slightly different beast.  When you wear a rollneck with a suit, it creates a very sleek look since you only have two main colors: the rollneck and the suit itself.  For suit combos, you can decide whether to make the turtleneck stand out or do what I did and make it the grounded, minimal inner piece. In sportcoat combos, you have much more to consider.

A cream turtleneck is probably the best one to use as an odd combo, since it literally replaces the white OCBD that most guys would wear in a “casual sartorial” outfit. However, I don’t have one (I only have grey, burgundy, and navy blue) so I had to approach these outfits in a different way.  You guys know that I normally do 30’s inspired looks for my daily wear, but I decided to add three decades and go for a mod-1960’s look. 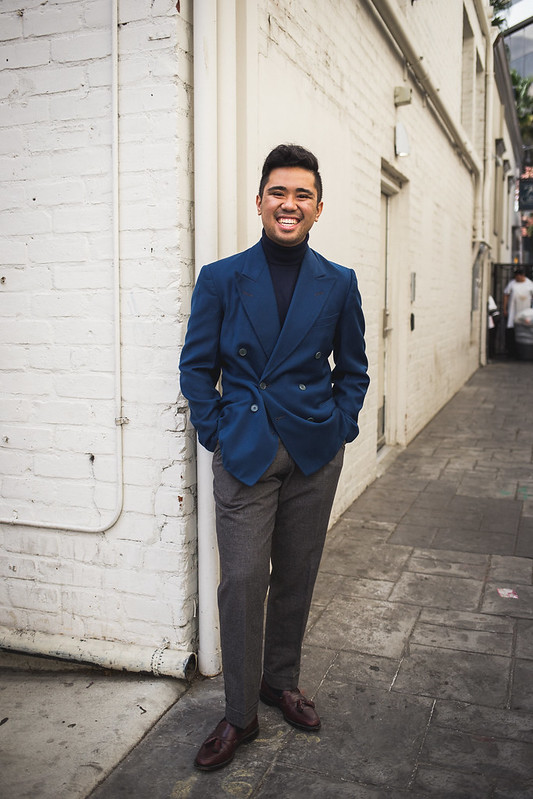 This look is one of my favorites, just based on how everything fits.  I’ll call it pseudo-mod vibes simply because that’s what I think of when I see a double breasted jacket worn with a turtleneck.   The jacket is a bright blue (bright colored suits remind me of the rat pack) and gets grounded by the navy sweater and the grey flannel trousers.   This piece is actually from the mid 1940’s, cut from a modest twill gabardine and features no vents and lightly padded shoulders.   I think that the cut doesn’t look dated at all and is way better than what you’d find RTW at most stores; hell it’s better designed than my indochino suit.  It’s probably just the wide set buttons and semi-horizontal lapels with a lazy peak-the details they don’t do anymore.

A traditional navy jacket would have been the “safe” choice (and probably more elegant), but like I said, I was intentionally going for that 60’s look.  It’s something a little bit different, but certainly at home with my vintage-inspired style.  You don’t always have to be 30’s if you don’t want to! 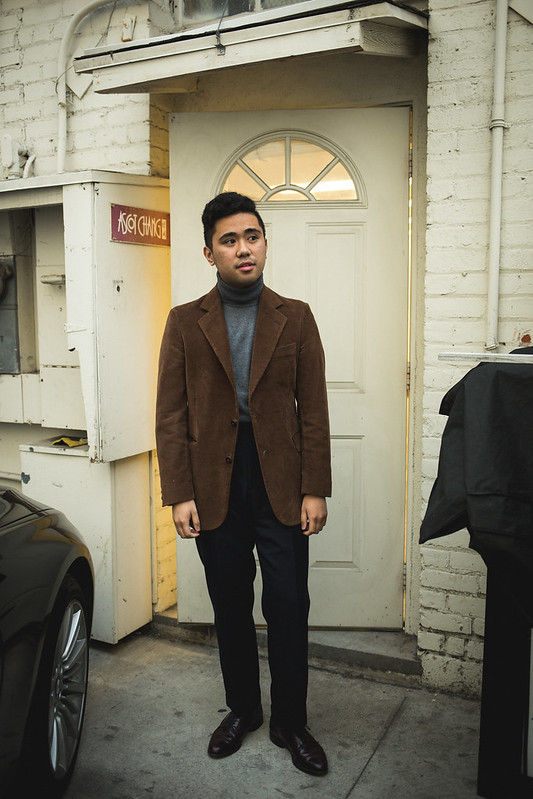 Now this is some 1960s-70’s style right here.  I’m not sure what to call it, but I do get slight 60’s youth from it with a hint of professor-y vibes; it’s even a close match to the Bill Murray outfit from The Royal Tenenbaums that I posted earlier.  It’s all do to the slightly more vibrant rollneck sweater (grey isn’t as sleek as navy blue)  and the use of this classic brown corduroy jacket.  While corduroy has been around for a long time (there are definitely garments made from it in the 30s-40s), I mainly associate it with the 1960’s thanks to proliferation of ivy.  The fabric is still relevant today (though in a more narrow wale), but as I’ve stated before, the color brown in general just screams vintage. This pale brown is no exception as it’s a more rakish color compared to a navy or chocolate brown jacket.

Since the colors are slightly light on top, I went with navy trousers as my grounding piece.  Wearing a grey sweater or jacket always gives me slight grief as I’m normally wearing grey trousers; the use of a brown odd jacket also meant that I couldn’t wear brown trousers.  Navy is a slightly harder color to wear as odd trousers since it’s a little formal for my taste, but I think it works really well here.  If I wanted to dress it down further (and perhaps go all in on that 60s look), I could have gone with my high rise selvedge jeans as they are my actual go-to “blue trouser”. 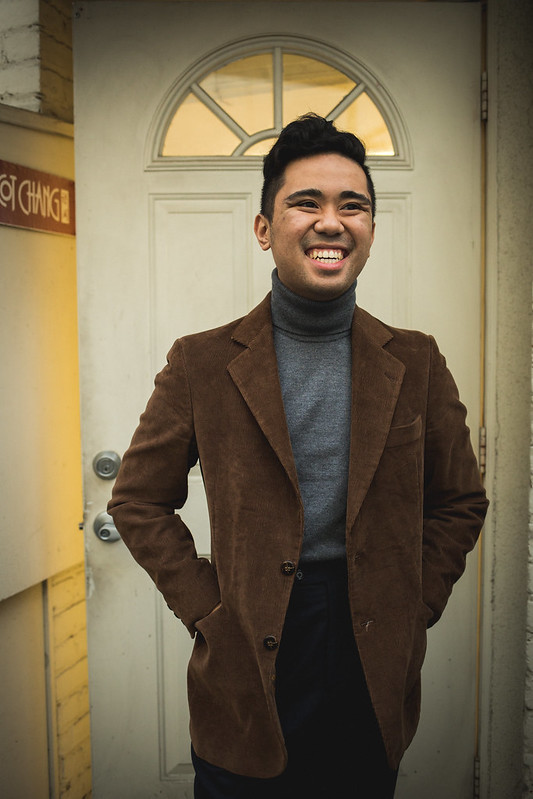 Let’s talk about the jacket!  This brown corduroy sportcoat was thrifted a few months ago.  I don’t have many detail shots, but I think it’s probably mid to late 60’s.  There isn’t much shoulder padding (but they are square), there is a normal button stance, moderate lapels, and a waisted figure.  No patch pockets unfortunately or a 3-roll-2 configuration, so this isn’t ivy.  It’s actually fully lined with some funky foulard/diamond print lining and has a tag that says “100% Cotton”.  Overall, it’s not a bad jacket and certainly gets the job done for a 60s-70s look.  I may go back and get it adjusted slightly, but it’s no big deal!

Try out the rollneck sweater guys, it’s a super cool (and functional) garment that can be worn a multitude of ways.  You can go sleek and minimal like I did with the pinstripe suit or mix it up and go for some 60s-70s vibes by playing with semi-muted colors.  Obviously there are way more options to explore than just mine.  A lot of guys think that turtlenecks are too stuffy when I actually think they’re pretty easy to wear.  When you put one on, you don’t have to worry about matching shirts or ties; it literally covers your torso and your neck.

Plus it’s just a dope piece.