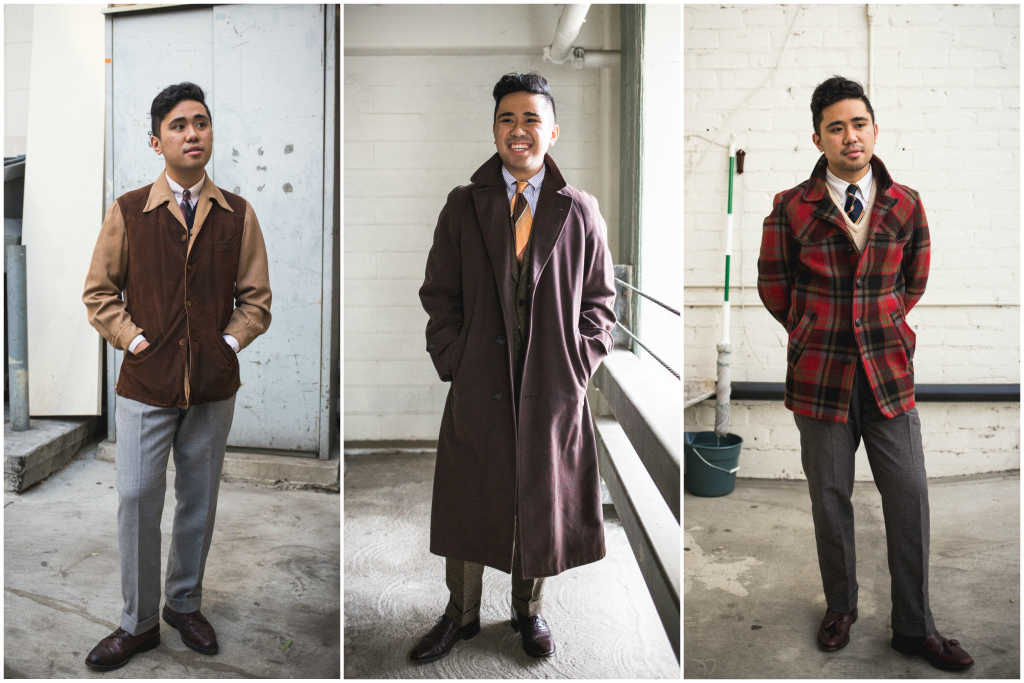 Time keep our layering theme going by visiting the deep reaches of my wardrobe and bringing out some cool, unique vintage outerwear!

It’s really been a while since we’ve done a piece on outerwear.  Sure, we’ve done the field jacket and the camo BDU, but they weren’t like the weird ones I did before. And boy were they weird; some were too basic while I advocated for denim jackets under a suit  in others.  Let the past die, am I right?

Honestly, the real reason I wanted to write this article was to show off some cool vintage pieces that seldom see the light of day.  I definitely have a lot of clothes and I think it sucks that it usually means that some pieces are forgotten and remain in the back of the closet.   It doesn’t help that they are a little more “interesting” than most, but that’s what makes it a challenge! Forming the idea for this blog post not only allowed me stretch my styling muscles but it gives me a chance to show you some stuff that you might like!

Sure, there might be more “correct” pieces to go with when creating these outfits, but we aren’t always the type of guys who like to do the most “normal” choice when it comes to clothing!   I think we can agree that it makes for a more interesting outfit.

Also none of these required their own individual blog posts, so I just jammed them into one. 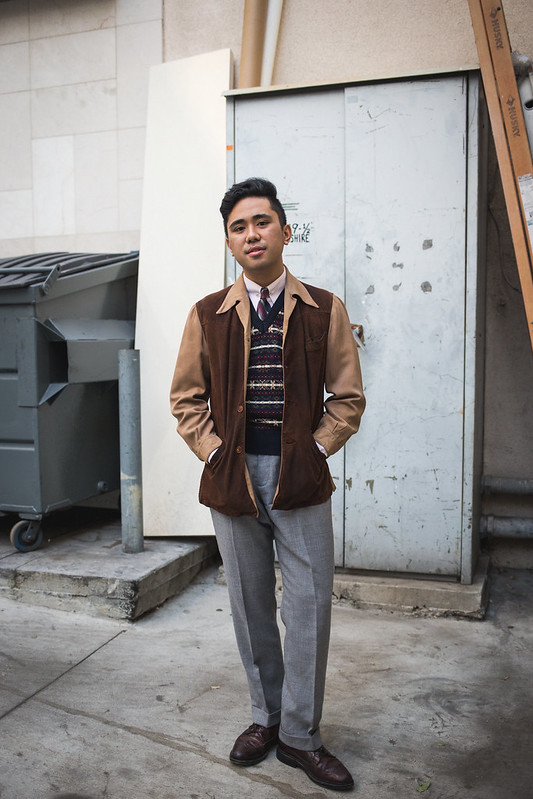 I consider the nehru jacket came to define some of the odd sartorial wear of the late 1960’s; if we go earlier in history, we can see that the 1940’s version of it was the Hollywood jacket.   Also known as  loafer or leisure jackets (especially on beltless models, these outerwear pieces definitely took the menswear world by storm in the 1940s and early 1950s, being worn by young men.   Characterized by their sportshirt-like collar (no collar band,  their similarity to a shirt-jacket, and it’s special two-tone coloring and fabric choice, these jackets really give an outfit a casual vibe that just screams vintage.  You can see George McFly wear one in a few scenes of Back to the Future. There are definitely wild ones like this and this that are definitely more casual and 50’s/rockabilly (belted ones are rare), but the ones that I like are made to look more sartorial. The one that are paneled with suede or tweed are the ones I prefer; in terms of color, blue and brown are the best. 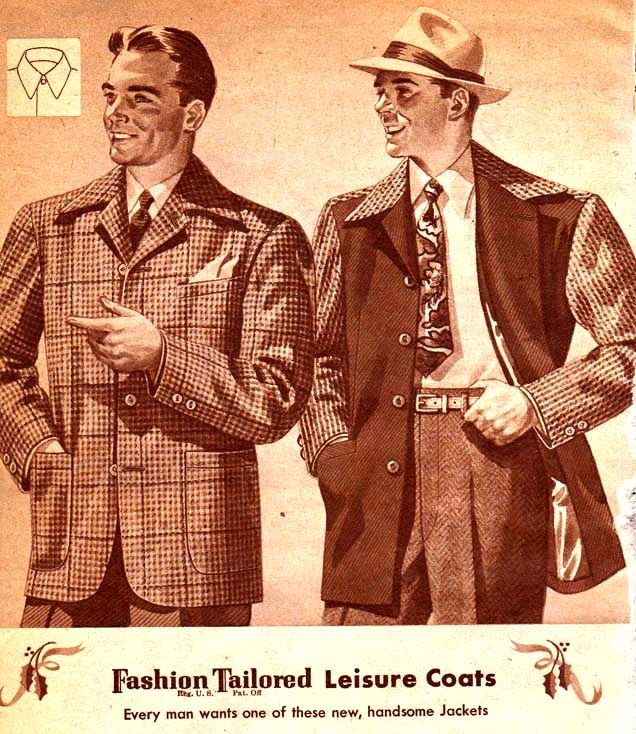 Honestly, I hesitated on including the hollywood jacket in this post, since they really aren’t considered outerwear.  As I said before, these jackets are leisure wear and were worn in place of a sportcoat, akin to a shirt jacket or chore coat (but much more formal in comparison). 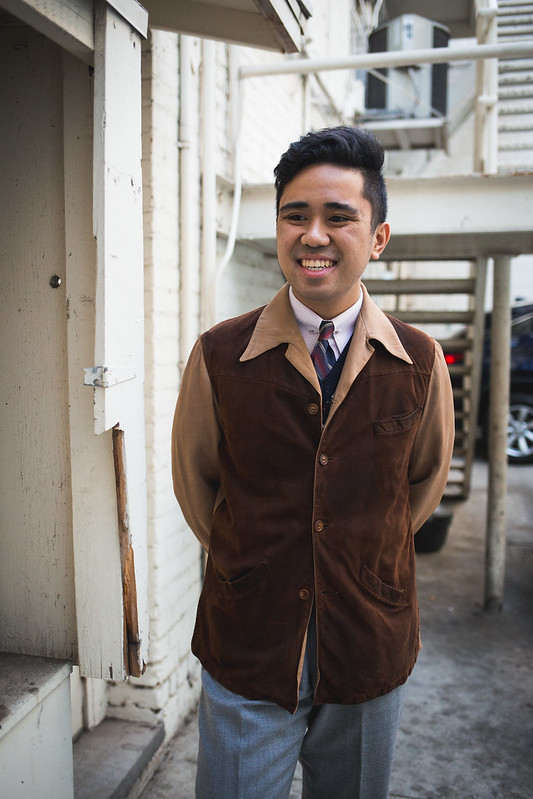 My hollywood jacket has suede front panels and wool gabardine collar and sleeves.  It’s the classic brown color, so it isn’t as flashy as the rare, expensive ones you normally find.  It’s unstructured (most beltless ones can have shoulder padding), with a severely  angled “teardrop” collar, which makes me think its an earlier model than the others.  I think it’s a pretty cool garment, that I need to break out more.

In terms of styling, I got my inspiration from Howard Stark.  Stark can be seen in Captain America wearing an outfit similar to mine: a brown hollywood jacket with sweater vest and spearpoint.   It’s pretty comparable to this outfit, since it contains a slightly formal outfit underneath a more casual outer layer.   I’ve seen a lot of guys wear their hollywood jackets with tailoring this way, as I’m not  a not a fan of the “casual” version of an outfit (sans tie).  The striped spearpoint and shirt provide some typical Ethan sartorial style (I seldom wear plain shirts) while the sweater vests anchors in the vintage-feel of the outfit.  It’s pretty easy going compared to if I wore a sportcoat!

It’s not completely warm, but the gabardine and suede definitely give it a bit more weight than a cotton chore coat.  If you decide to pick one up yourself, either get one that has tweed or layer up (like I did) with a sweater vest.  The hollywood jacket is perfect for mild days where you want to be just a bit extra on your layering game. You can bet that no one will know what the hell you’re wearing.  But that’s a good thing, right? 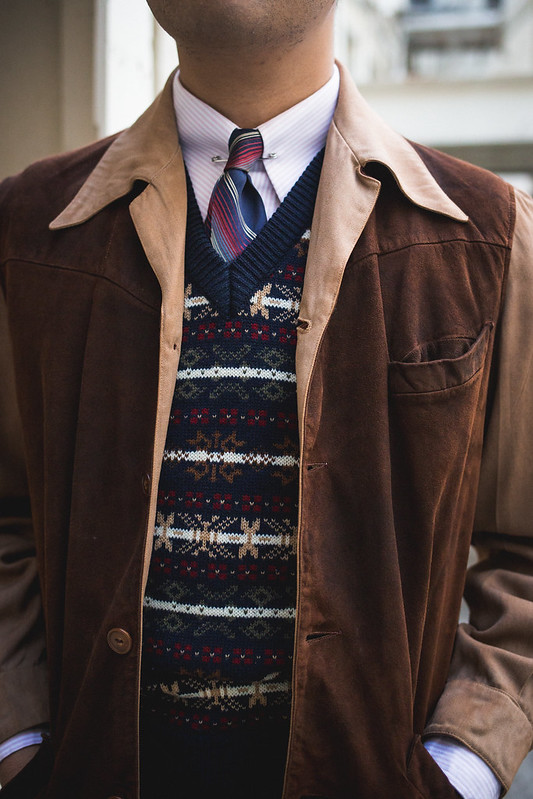 If I’m being completely honest, I’m having a hard time on figuring out more outfits to make with this jacket since it’s pretty vintage and not that versatile.  I feel like the suede and gab make it cool to wear with denim, but I’d honestly rather wear a leather jacket or gab shortjacket instead.  I think that it looks best with vintage/vintage inspired tailoring.  Give me ideas if you have them! 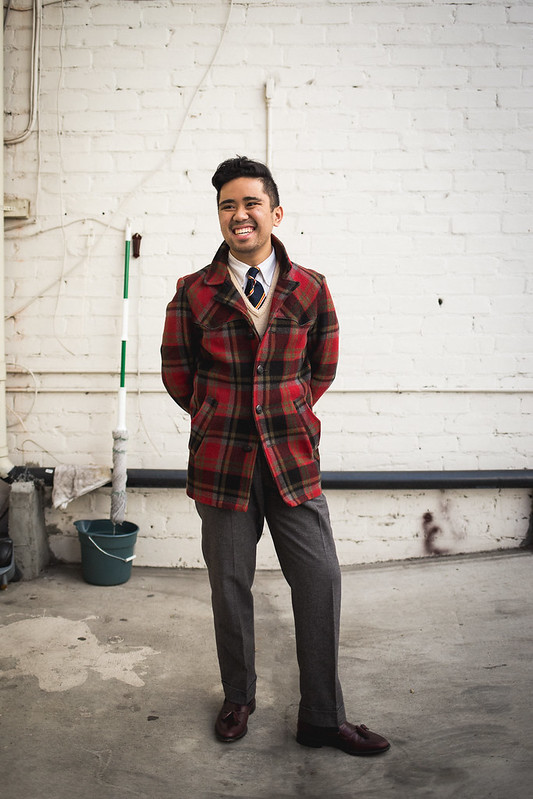 Mackinaw jackets are one of the few vintage pieces that can transcend eras, but that’s usually the case with outerwear.  They are a casual garment, made of thick wool that is usually plaid (and red).  Like with most vintage pieces, earlier ones are more rare and expensive; the best kinds of mackinaw jackets are from the 1930s-40s and are double breasted and belted.   Most of the time, it’s styled with workwear outfits but I’ve seen it done well with tailoring.

My mackinaw is a little bit different than the main ones we see, because it’s got some western vibes.  For example, the pockets have a point, a leather yoke, and interesting lining.  It’s also probably a 1950s-60s jacket since it’s a lot shorter than other mackinaws, at least to me.  Keen eyed readers will recognize this from one of the first posts on this blog! 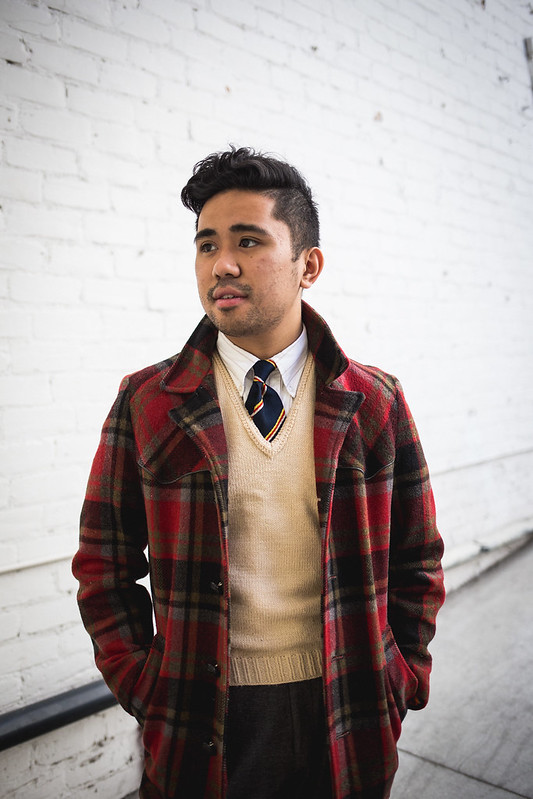 In terms of styling, it was pretty much similar to the way I did it for the hollywood jacket; sweater vest and striped shirt & tie. If you look at Ethan Newton’s example, you can infer that he’s probably got  ivy-style stuff going on underneath, thanks to his grey flannels, white socks, and black loafers. My outfit is a continuation of sorts; I kept the loafers and grey flannels but added a cream sweater vest to provide contrast to the other deep colors.  With my trusty striped OCBD and a repp tie, I’d like to believe that this is what an ivy guy in the 1950’s would have done if it was cold; keep the university aesthetic underneath a warm, blanket-y jacket.

I’ll probably break out this jacket with a cream crewneck sweater and sevledge, but I do like the challenge of incorporating rugged outerwear with tailoring.  It might have started with the camo BDU, even so, I think it’s just me getting inspired by the great style of Brycelands. 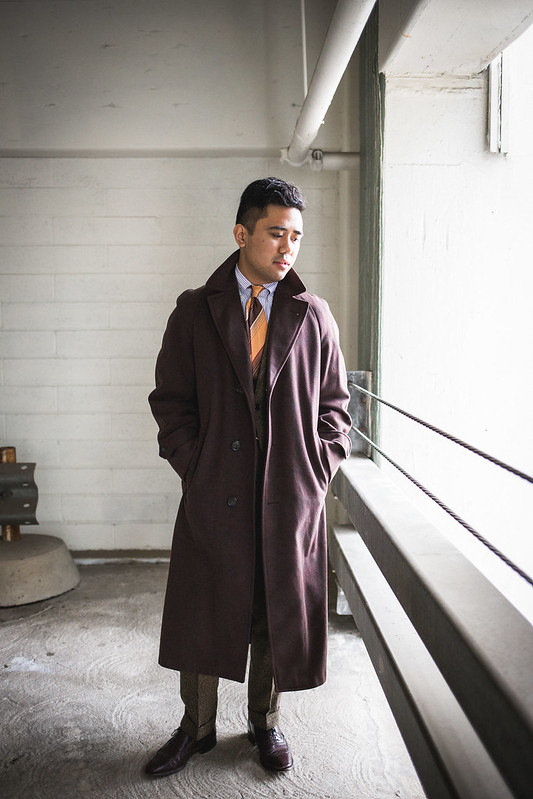 Ya’ll wanted me to post about this coat, so I did!  If you haven’t read my NYC style recap, then let me introduce you to the bad boy that was my best friend in that cold weather.  I got this 1940’s raglan overcoat from Paper Moon Vintage after my interview with Ascot Chang.  It really was more of a “calm down, you did great” present to myself, but it turned out to be really useful! I’ve worn it a handful of cold nights here in LA, but it definitely got it’s workout in NYC.  It’s a perfect fit for tailoring, with just enough room to have a suit underneath. No alterations needed!

While I do like double breasted overcoats, I think that single breasted ones (especially vintage) are much more versatile.  This model has only 3 buttons,  features a wide Ulster collar (with swelled edges), and is able to be fastened with a throat latch.  Plus, the coat is actually long so it’s actually functional against the weather.  I don’t have pictures of the inside, but it’s half lined with no moth holes anywhere.  Seriously, this was a good purchase.

Even though this is from the 1940’s, it looks very similar to the SB overcoats from the 1950s and 1960s, as they liked a non-traditional collar and preferred a 3-button stance. 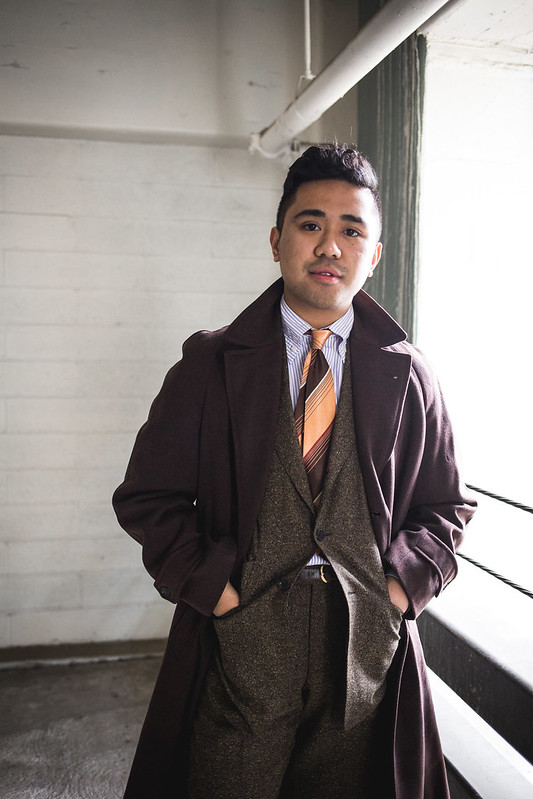 You saw it worn with separates the last time, so I thought it would be cool to wear it with a suit! Naturally, brown goes with almost everything, so it’s a perfect match for my green fleck Camoshita suit.  I felt like doing something a bit more contemporary ivy (like Mr. Yatsuo Kamoshita) so I followed his lead and matched his gold/brown tie with one of my own.  While it’s certainly the star of the outfit (contrasting sharply with the green suit and purple stripe shirt), it’s not too out there.  I really think it’s something similar to what he’d pick for pitti. 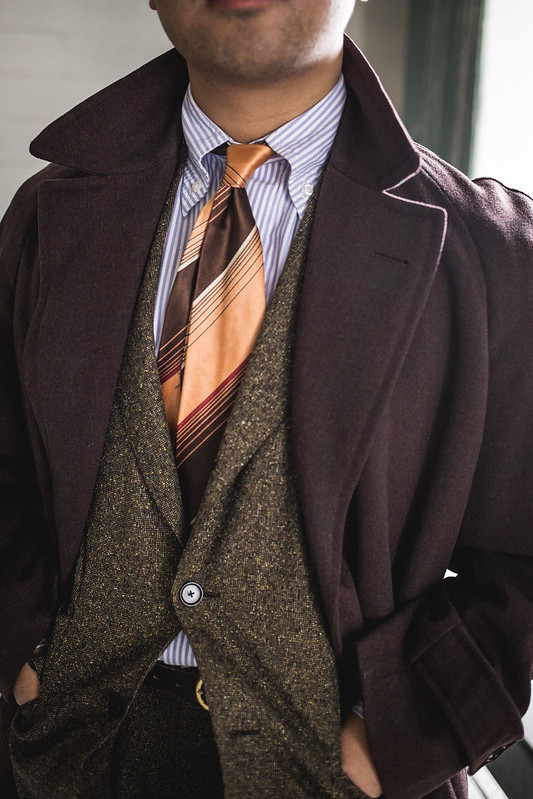 Now, I’ve tried really hard on trying to capture the fact that the suit has an extremely subtle green check.   I think it makes the coat so unique but it sucks that people can barely see it.   Maybe I need to take better pictures, but you can sorta see it near the buttonhole on the lapel.  Patterned coats are cool, so having a subtle one is best, since it allows you much more freedom in your outfit choices.  I wouldn’t wear a herringbone coat with a herringbone suit, for example.

Well wearing these was a bit of a challenge.  I don’t know if you’ve noticed, but for the past year, after getting more into contemporary classic menswear (Armoury, B&Tailor, etc), I’ve noticed that my style has gotten a bit more “safe”.  Sure belt backs and leather jackets are cool, but not as interesting as a mackinaw or a hollywood jacket.  I do appreciate that I was able to look back into my closet and craft outfits with these seldom scene pieces.

Obviously the best one here is the raglan overcoat.  I really did consider giving it its own blog post and I still might, if I have time for it.  I’ve worn it with separates, with suits, and even with just jeans and sneakers; it gets the job done.  The mackinaw made a nice return after a few years in the closet, but I think I really want to explore more of the hollywood jacket. It’s a piece that is seldom seen and I would love to bring more awareness to it.  The jacket is super unique that doesn’t really have many equivalents today, since it’s not quite the same as a chore coat or shirt jacket.  I just think that it’s a little too vintage that doesn’t jive well with a tee shirt and jeans.

For a general note, I think it’s great to add personality by going with unique, vintage outerwear.  It’s much easier than trying to incorporate a vintage suit (or even a tie) into your general rotation, since outerwear is the last thing you put on and the first thing you take off.  All of the pieces here elevate all of the outfits, because you can argue that they were pretty normal before I added the outerwear.  I also think that LA’s hot weather (of which we have 90% of the year) is the main reason why I don’t wear much of these items.

I mean, I’m just happy that these still fit after a few years.  Maybe the stress of life is what keeps me “in shape”!