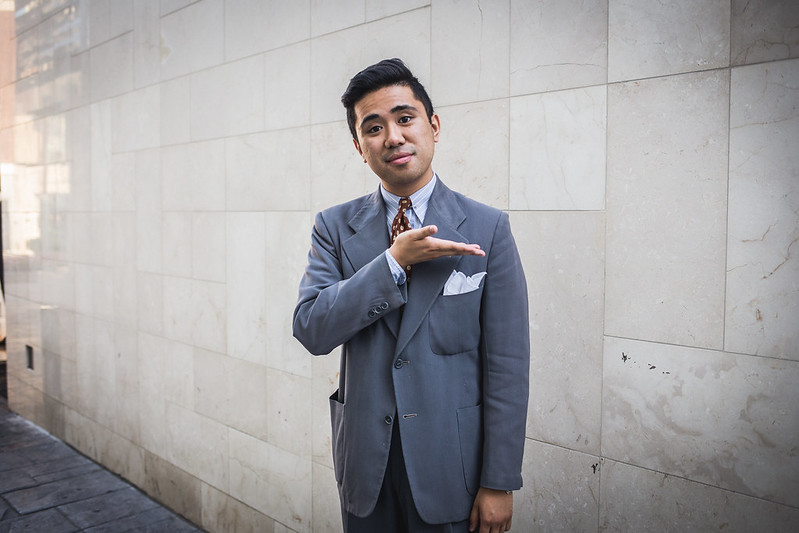 I did the one thing you shouldn’t do at the tailor: alter the shoulders.

One of the most repeated advice-nuggets that are passed around menswear is that your shoulders have to fit.  It’s the tougest thing to fix and usually isn’t worth the trouble.  I’ve said it on this old Q&A (before Instagram gave us the question feature) and we said it a bunch of times during our Dapper Day Lecture.  You can always take in the chest/waist or let it out (depending on the fabric) but shoulders are a different story.   You can’t make a shoulder bigger, but theoretically you can make a shoulder smaller/narrower.  It’s just friggin’ expensive and time consuming.

The reason why it’s so expensive/time consuming is because to fix the shoulders of a jacket, you have to take the sleeves off.   From there you’ll either have to spend time shaving the padding or changing them out right; then you’ll have to bring the shoulders in carefully.   After all that is finished, you’ll have to reattach the sleeves the body.  All of that work is pretty damn close to changing an entire jacket!  You’re better off trying a different size (if it’s RTW) or just junking the suit.

It’s not just a matter of picking the right size (a 40R will have broader shoulders than a 38R), but a matter of taste/style.  The 1940s-1950s (and later the 1980s-90s)had the bold look, with heavily padded and extended shoulders, making the torso appear broad and classically masculine.  The late 60s and 70s had a more elegant take on the extended shoulder, adding in the roped sleeve head for an almost regal appearance.  The current trend is for something soft (naturally sloped or no padding at all) and lightly extended for a relaxed and masculine appearance, though the democratization of fashion allows for multiple tailoring styles to exist simultaneously.

As you can see the in the following images, shoulder treatment is more than just fit; it can also be an intentional choice.  That doesn’t mean that fit isn’t important; there is a big difference between intentionally extended and just oversized.  If you want to learn more about shoulder treatments, I suggest you look at Die Workwear, as he’s written about it a lot (like here, here, here, and here) 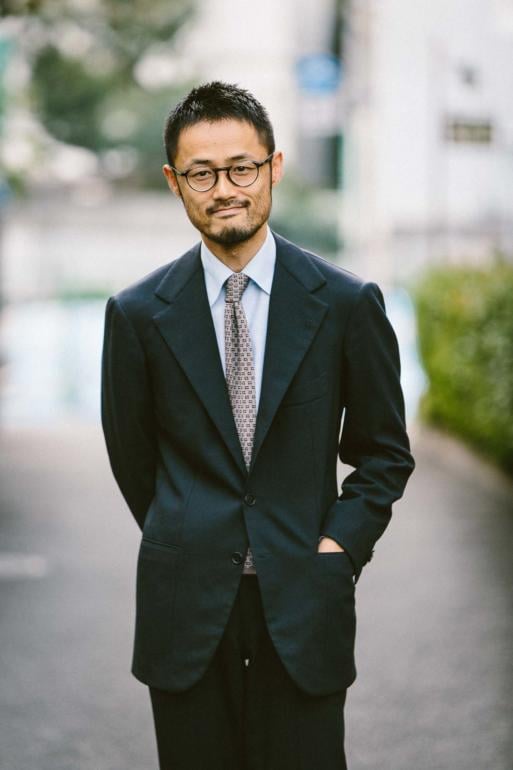 More 30’s; note the super regal one in the corner. 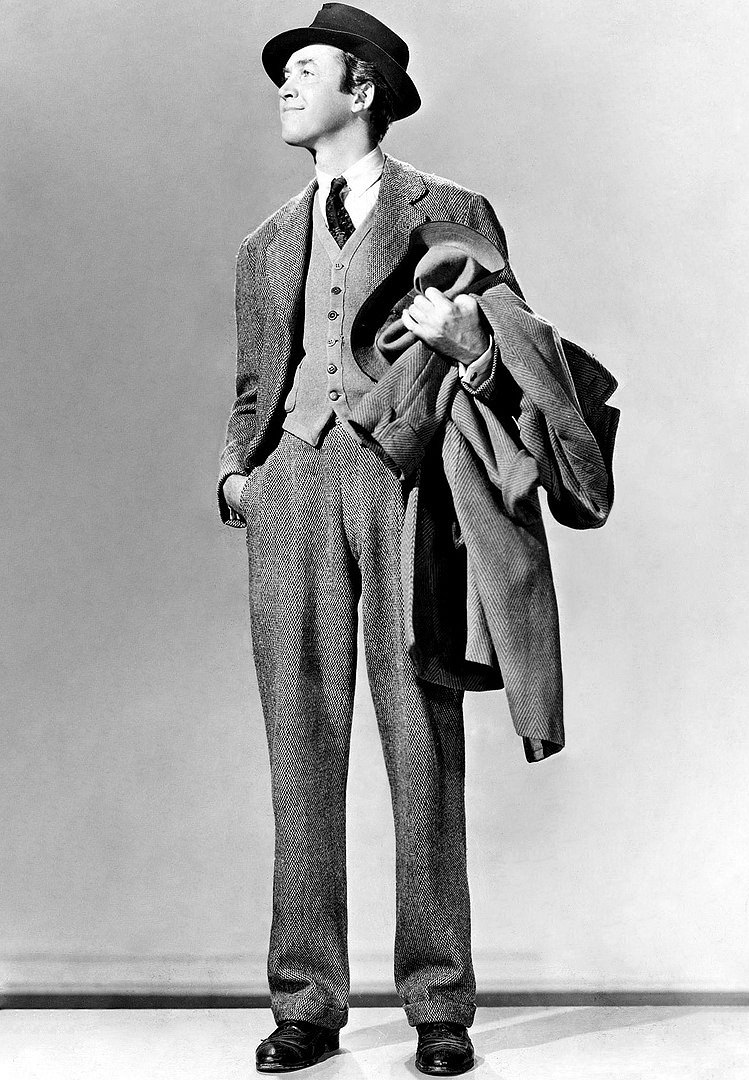 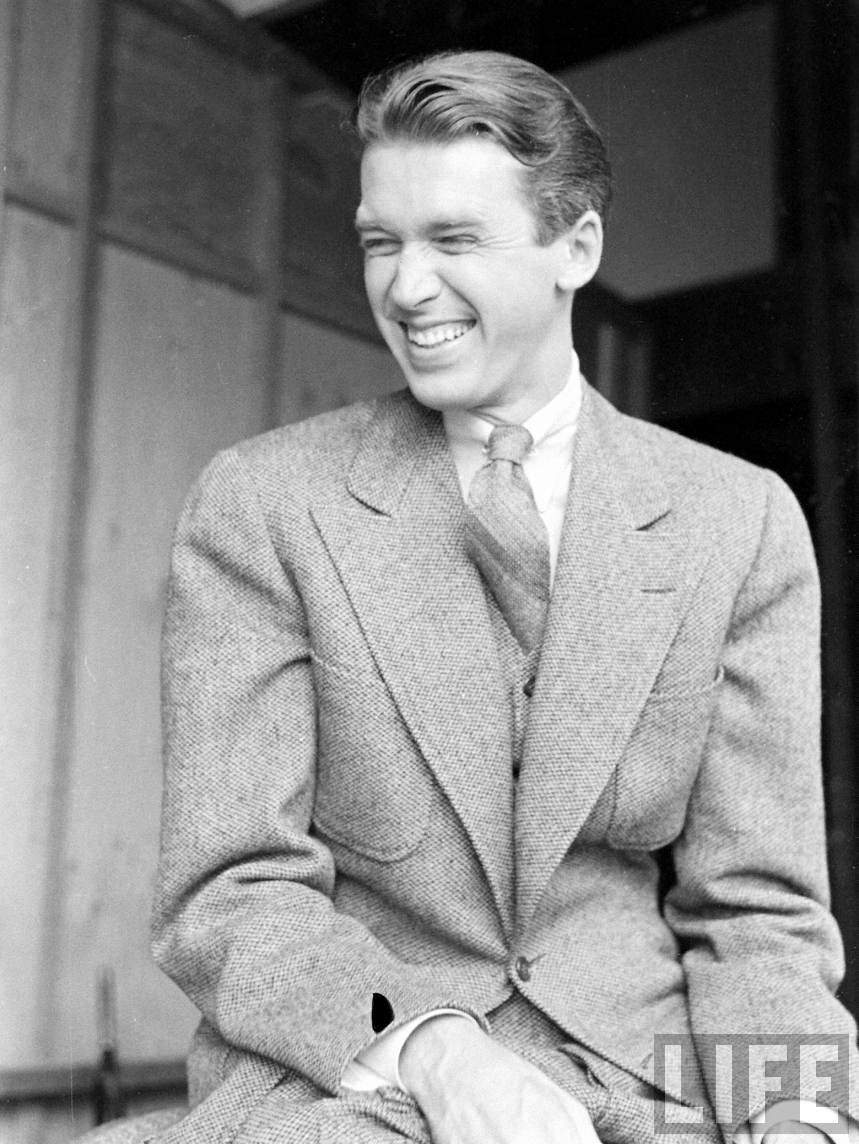 Getting wide with Stewart. Can’t you just feel the padding?

While the “classically masculine” padded/structured shoulder appeals to some guys, it’s not for me.   Personally, I’m huge fan of super soft shoulders; the more unconstructed, the better. I like being able to live with something that just lays on me with a subtle figure through the body, perhaps a little bit of shoulder extension for good measure. I simply find that anything extra on the shoulders  doesn’t suit my body nor my attitude toward menswear.

While not everything I own is completely soft, I try to ensure that most stuff can ride the line, as padded/structured jackets tend to look too vintage in my eyes.  I simply own up to the small amounts of padded shoulders  I do have.  With that said, I’ve never done anything too major on my shoulders other than once before, when I removed a bit of the shoulder padding on an old 1940’s navy jacket.  It wasn’t expensive, as we simply took out some of the padding.

As I’ve been way smarter with my purchases lately (and have stopped wearing too many 1930s-1940s) I thought that I’d never have to do any shoulder stuff again … until I decided to revisit this 1940’s grey gabardine suit. 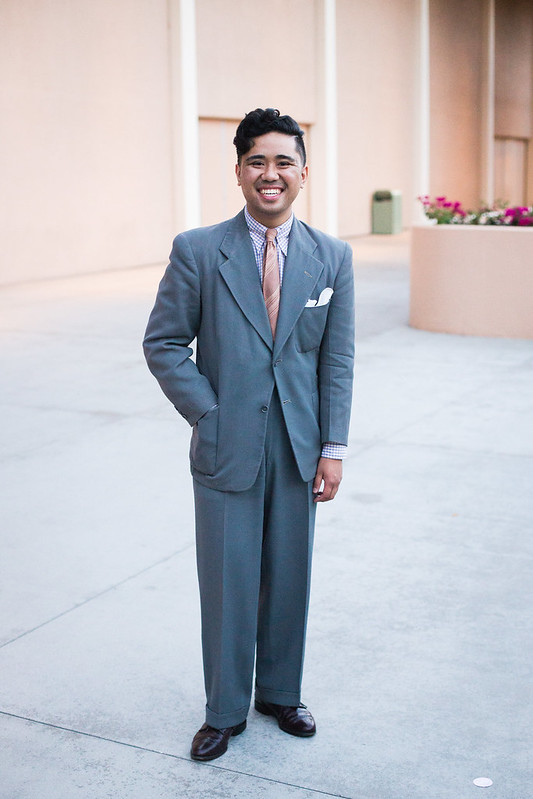 This suit is a monster.  I bought it from Reese’s Vintage Pieces a couple of years ago because it was so cheap! While here were a few stains and fades, it actually was in pretty decent condition.  I loved the elephant grey color, the huge patch pockets, and the lapels (of course), as the latter two were details you can’t really find today.

While I am no stranger to full cut pants (and keeping them that way), the main issue for me was the shoulders.  Not only were they extended, but they were padded.  I felt like a fucking football player wearing this suit.  As such I’ve only worn it a few times, most notably to Dapper Day.   I can’t really wear this anywhere else, even though I’ve done full cut suits before. 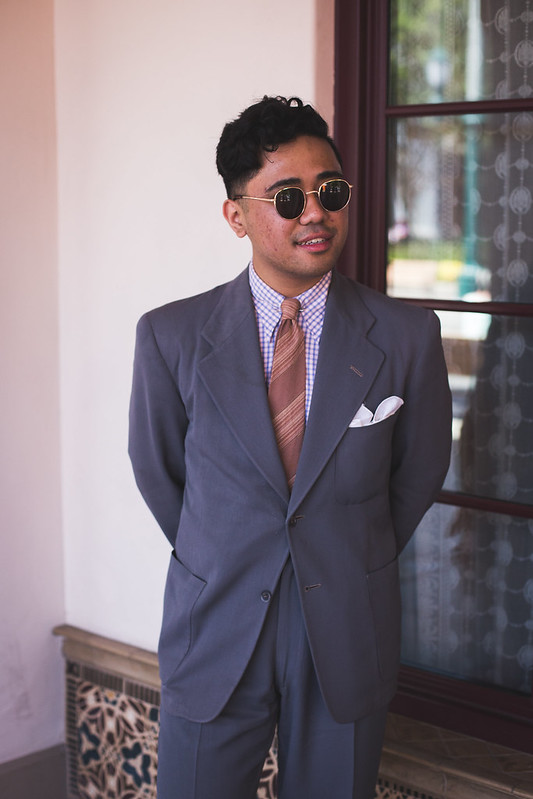 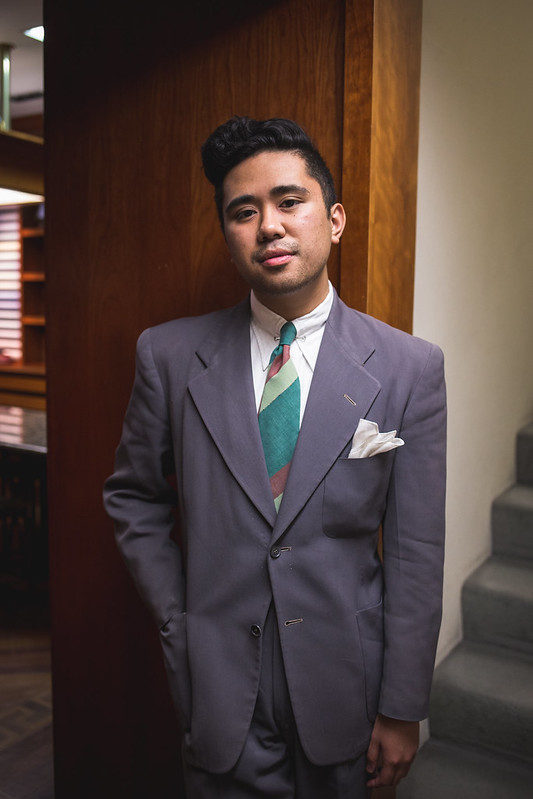 So the last time I was visiting my new tailor (I got to one in LA since I’m back home now), I decided to bring the jacket with me just for kicks.  To my surprise, he said he could do it!  He would remove the pads, replace them with smaller ones, and bring in the shoulder, since they would definitely sag off my body when the pads were taken out.  Unfortunately he said he couldn’t do a totally unconstructed shoulder (he is an old school guy) but he was confident that I would be happy with the results.

I knew that it was going to be an expensive fix, but I thought it would be worth it to save this suit.  It’s such a good color with cool details; I didn’t want to part with it!  Plus, if this worked, it would be a gamechanger to bring my 1930s-1940s clothing in to the modern day… 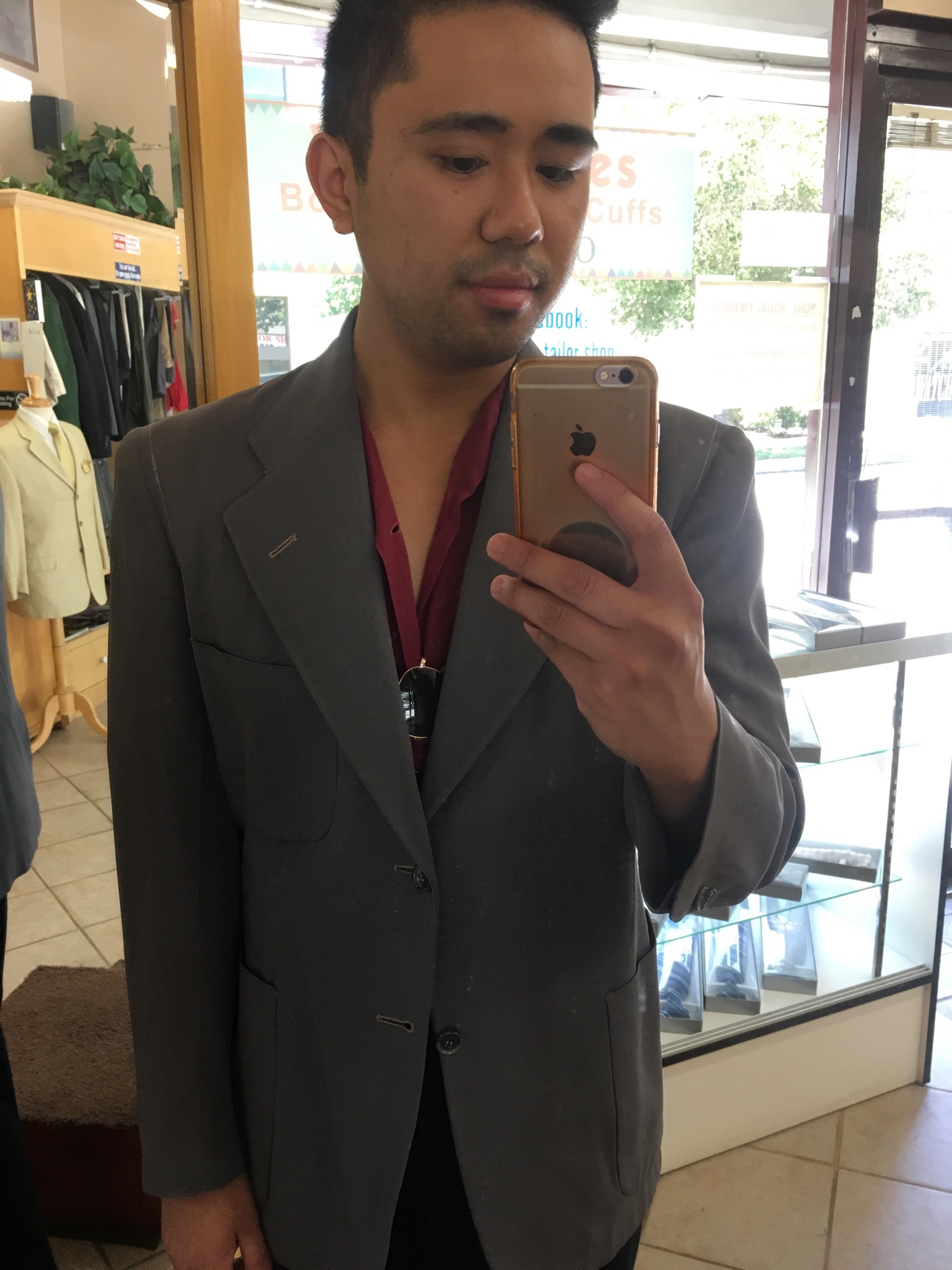 Chalk marks show exactly how far he’d have to bring it in. 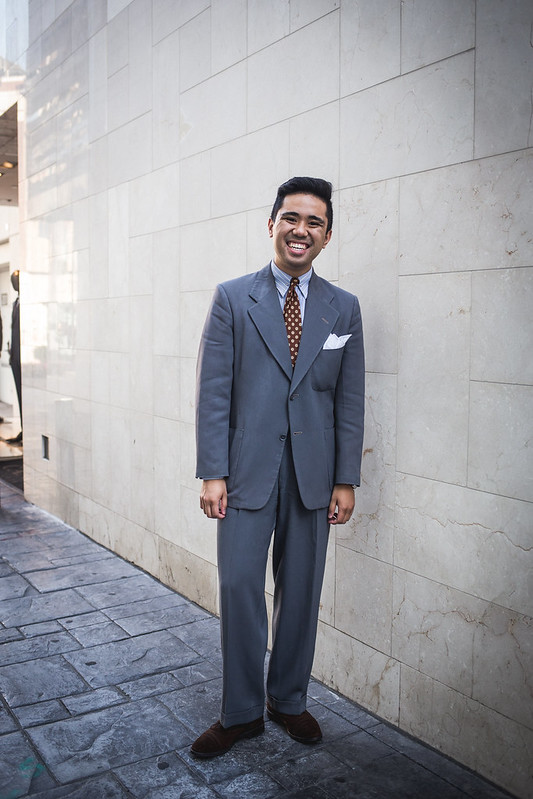 As the heading suggests, I think it looks like an entirely new suit, post alteration process.  Even though there is still shoulder padding, it’s a lot softer and natural when compared to it’s original state.  The shoulders now look like something from the 1930s or 1990s if you wanted to date it. It’s a bit of structure, but nothing roped/regal.  It’s nothing really special, though it is at the same time.

Obviously the suit retains it’s vintage aesthetic.  The lapels are still wide with a really wide/low notch, the jacket is ventless (providing figure through the skirt), and quarters are pretty closed, almost like a square; of course the trousers are kept wide at their 9.5″ opening. 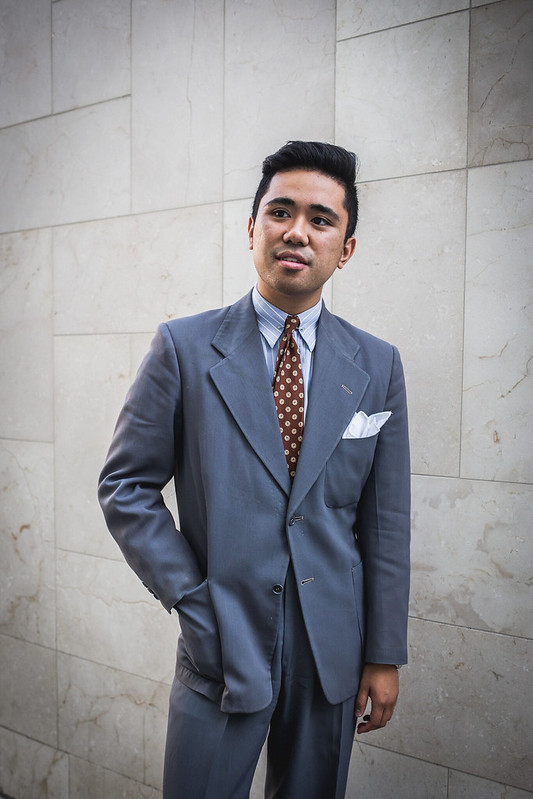 However, I don’t think any of it looks at bad or too unwearable.  Anachronistic, sure, but we always like the old stuff here.  The removal of the excessive shoulder padding allows it to be seen in a more contemporary context, almost like you simply got a “normal” jacket (ie, not overly soft) and simply asked for some wide, shivering break trousers.  To me, it appears something a bit more Milanese, but has more in common with the English drape look (as this is a 1940s drape suit after all).  The suit (and jacket) is similar to what  Arnold Wong would request from a contemporary tailor, as I had previously mentioned that while Mr. Wong wears modern bespoke, he has them done in a way that reflects the 1930s-1940s era. 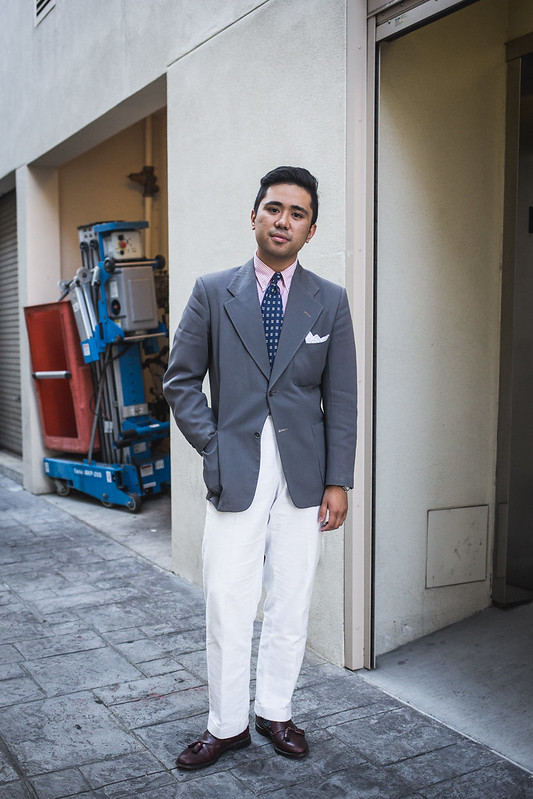 Originally I was concerned to wear it as separates, since the jacket is gabardine, which is a “smoother and less textured” than a wrinkly cotton or linen.  Like I said before, the cut is still a little dated (due to the structure and closed quarters) which makes it a bit harder to wear than a normal sack jacket.  However, I think it works!  The shoulders and wide lapels are offset by the straight (yet slightly tapered) trouser, making for a silhouette that skirts the line between vintage and contemporary. 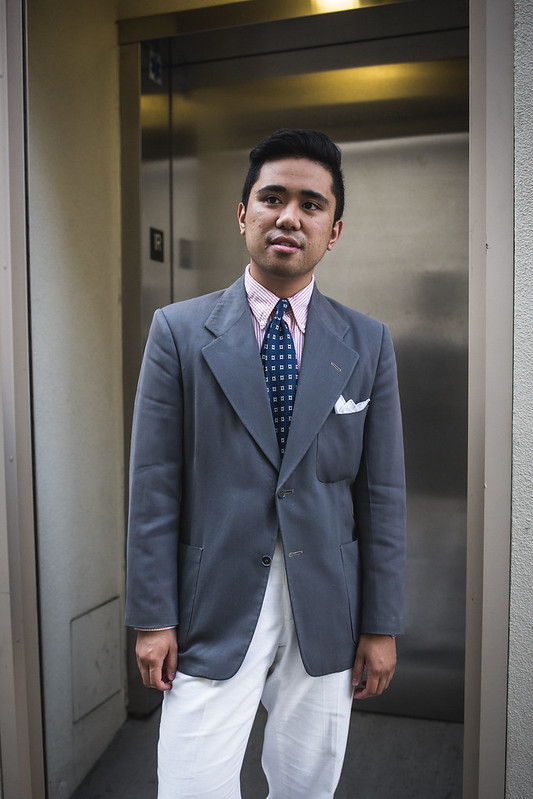 White is a perfect match for the elephant grey due to the contrast it provides.  Honestly, I could even get away with some dark navy or brown trousers (perhaps the stoffas?); I’m not entirely sold that khaki chinos would work.  I’m not usually a fan of grey jackets since they can be hard to wear as separates.

I’m still happy with how this turned out and will probably attempt to wear it with more things in the future, so be sure to check out instagram.

Altering a shoulder isn’t something we ever consider.  Its expensive and time consuming, as you’re better off simply trying a different RTW size (and then tailoring the rest) or even passing on the garment.  They shouldn’t extend too far off or be too short!  But then that brings the fact of shoulder treatments into question.  It’s one thing to have a shoulder be too big on you (i.e, extending past your shoulder bone) and another to have excessive padding.  There’s even the idea that while some jacket shoulders fit you “correctly”, they have different ways of doing it like roped shoulders, soft shoulders, or quarter back shoulders.

This was the first time I ever did such an alteration and I think it was worth it.  One of the biggest reasons I don’t wear vintage much everyday is how different the silhouette is, especially in regards to the jacket’s shoulder treatments.  This grey suit had great lapels and pockets, but those damn shoulders were just too ugly, being padded to the max.  After “simply” removing the pads and narrowing the shoulders (if I didn’t narrow them, the seam would droop), the extremely dated 1940’s suit jacket turned into something I can actually wear to non-vintage events.   As I’ve said before, I’m trying to make sure that I can wear everything in my closet.

Even though it worked out for me, it’s not something I can recommend to you. Please do not just buy random jackets and suits on eBay and think that you’ll be able to do a simple shoulder alteration to make it wearable.  Taking out shoulder pads its one thing, but narrowing them is another; the latter is how the money and time factor in.   With that said, if you find yourself with 1930s-1950s jacket in good condition that you want to save (and you have no qualms about “period authenticity”), then it’s something to consider!  I’m very happy with how mine turned out.  I have two 40’s tweeds that I may want to try, but that’s months away…