Dapper Day is a bi-annual event that takes place at Disneyland and Disneyworld.  As annual pass holders, Tim and I are always there every year and this time we brought along our friend Spencer! Now, Dapper Day was inspired by the fact that concept art of Disneyland was made in the 1950’s and back in those days, people still dressed up!   For our outfits, we decided to go a bit earlier and be the most dapper and well dressed we could be. 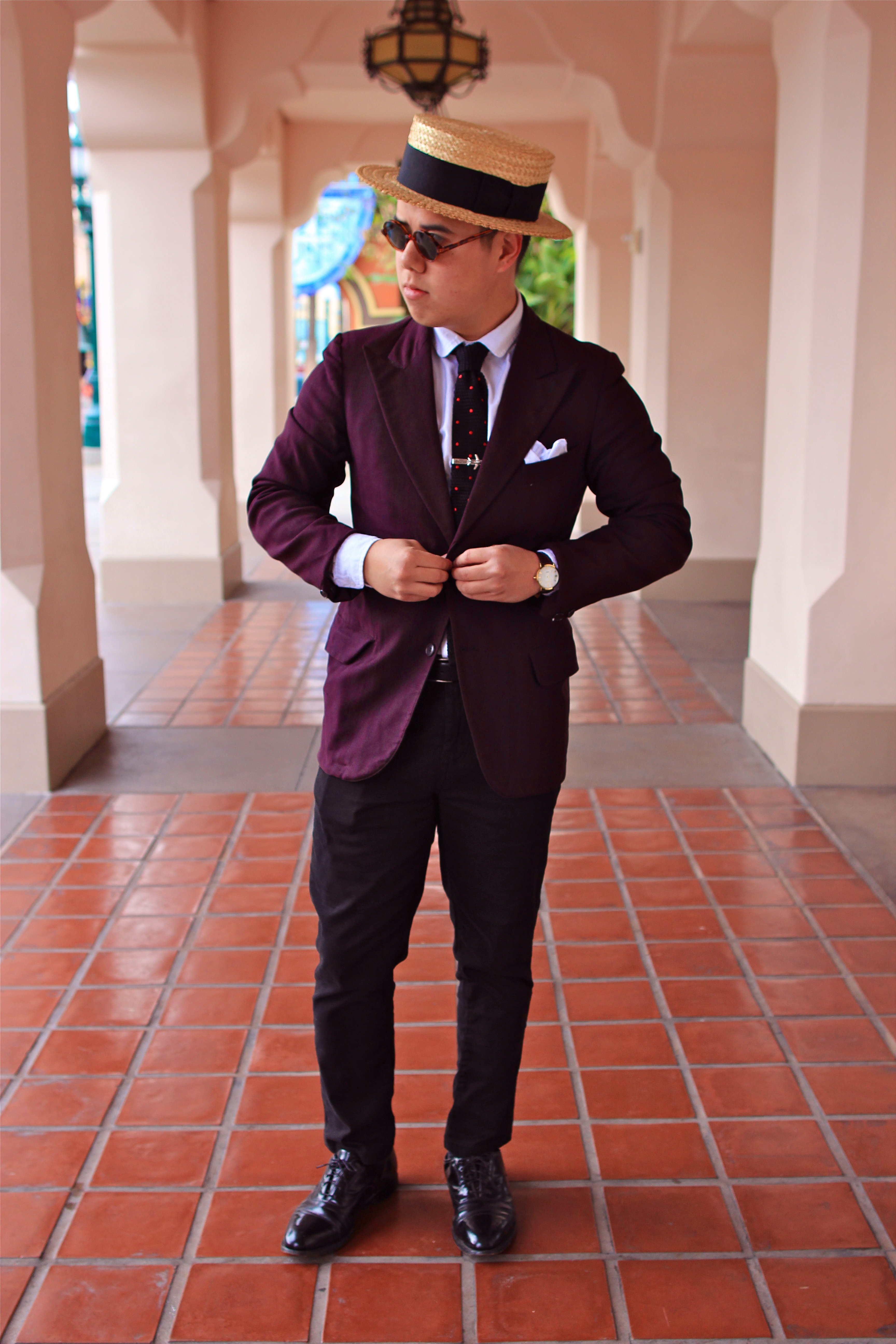 The reason I call this fierce is because of those damn sharp peak lapels.  Look at them! They point upward, showing offf Tim’s confidence.  As for the 1920’s time period, the boater is a dead give away.  Most people make the mistake of thinking that these hats were worn by barbershop quartets, but they were frequented by many men in the 1920s-30s in the summer time when homburgs or caps were too hot.

The jacket is purple and a true vintage item from the 1920’s.  People think that vintage clothes were baggy and huge but this isn’t the case.  This purple jacket is very fitted, with high and slim armholes.  They kept this through the 1930’s.

Now Tim isn’t the biggest vintage fan, so everything else is modern.  However, he gets an overall dandy look right and looks dapper af.  To compensate for the purple jacket, he wears a white shirt, black pants and black shoes to ground in the outfit.  It’s always important to do this if you wear something with a lot of color. 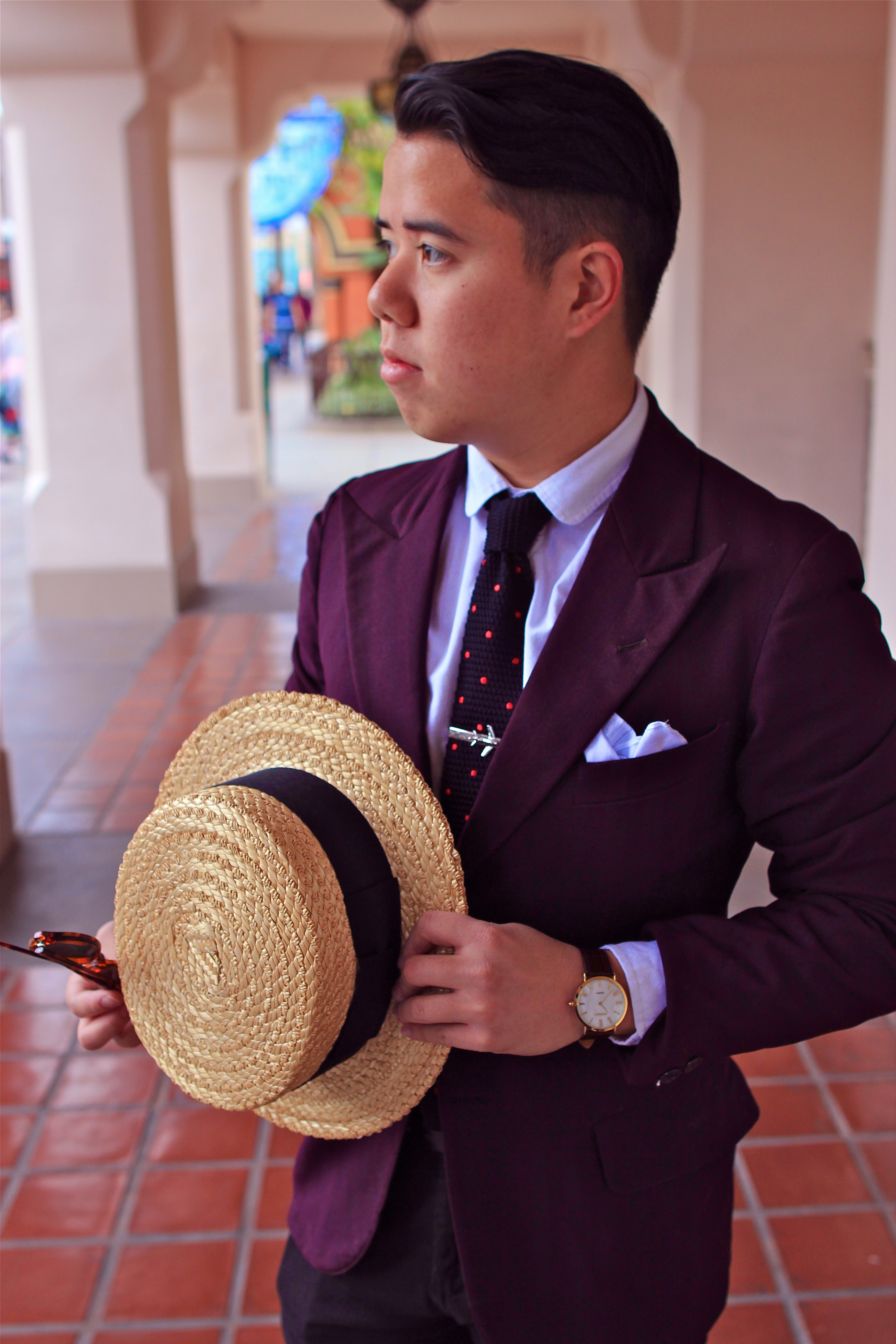 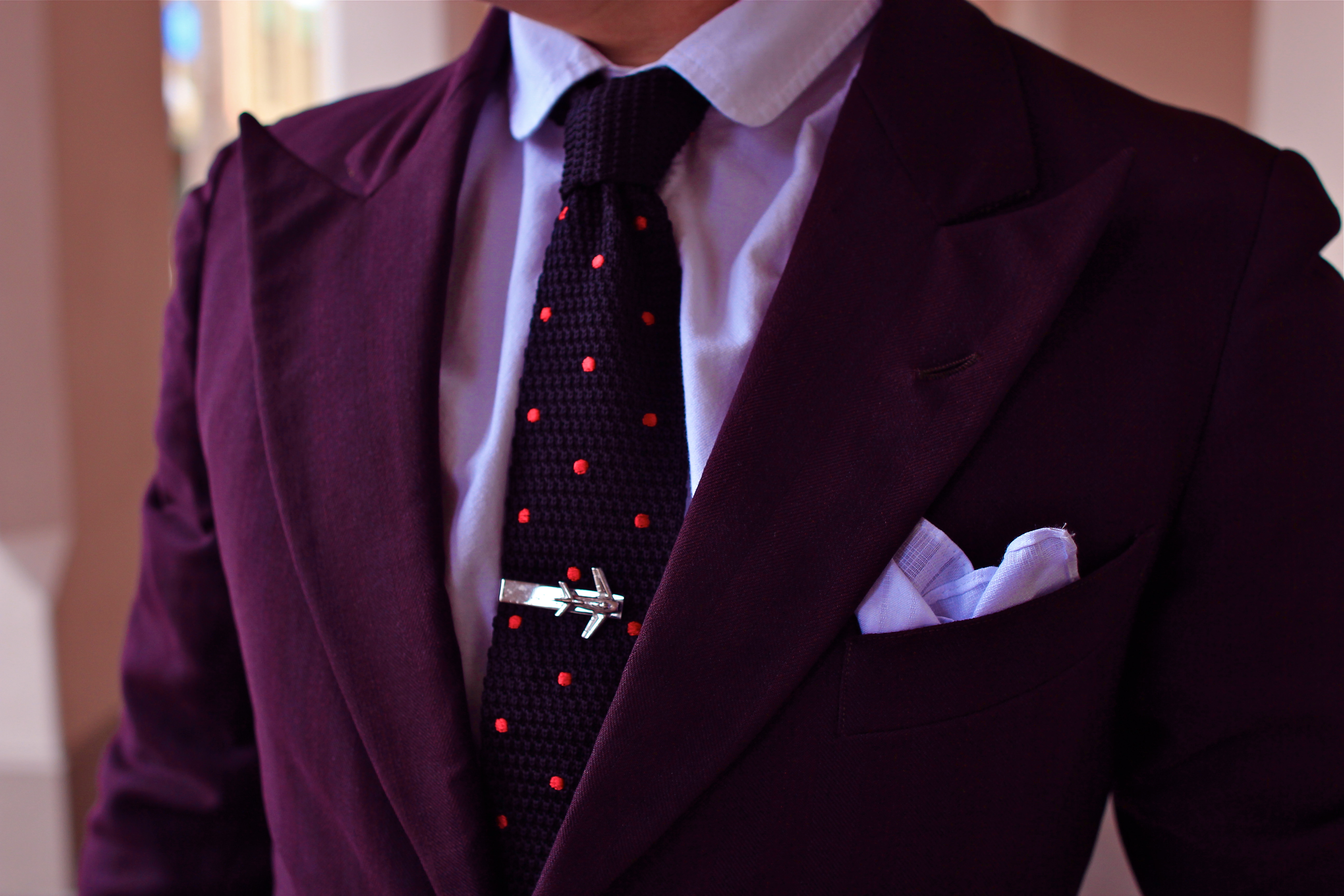 One way for a man (or any tie wearer) to add personality is by using a fun tie clip!  This one here has an airplane. 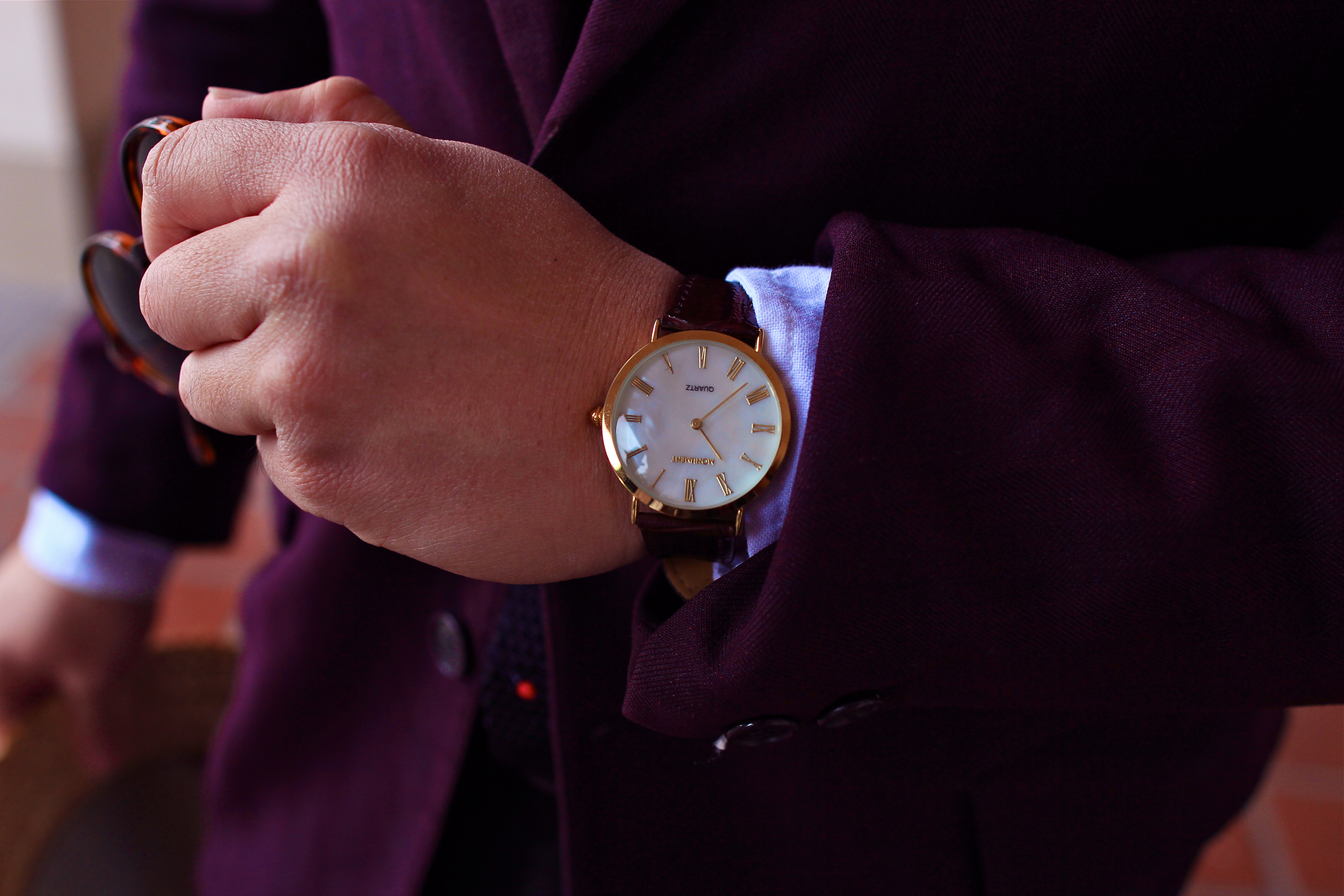 Watches are an essential item for people who..like watches.  It’s an elegant touch but personally, I prefer my phone. 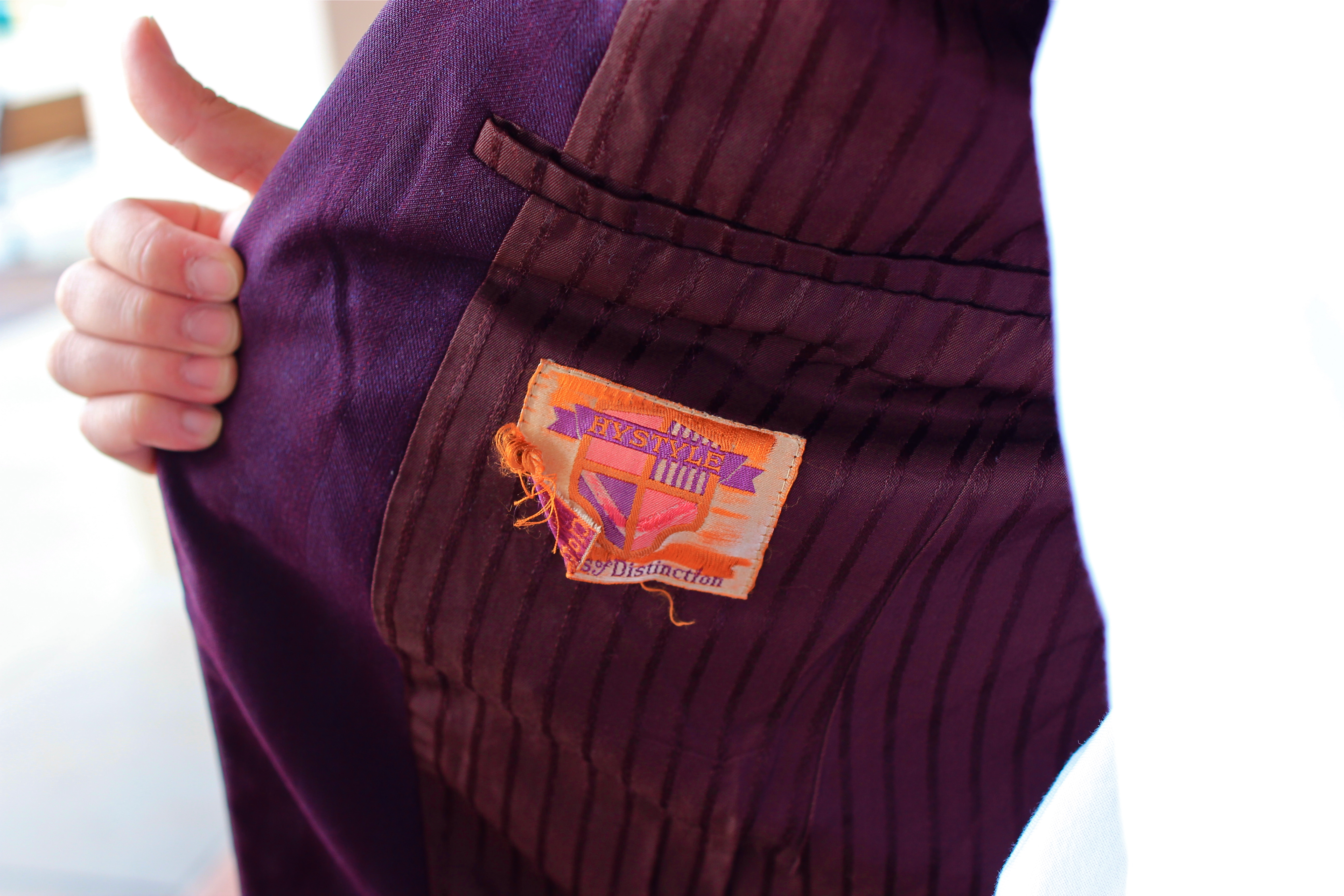 Clothing labels from back then (the 1920’s especially) were very detailed and hand made! 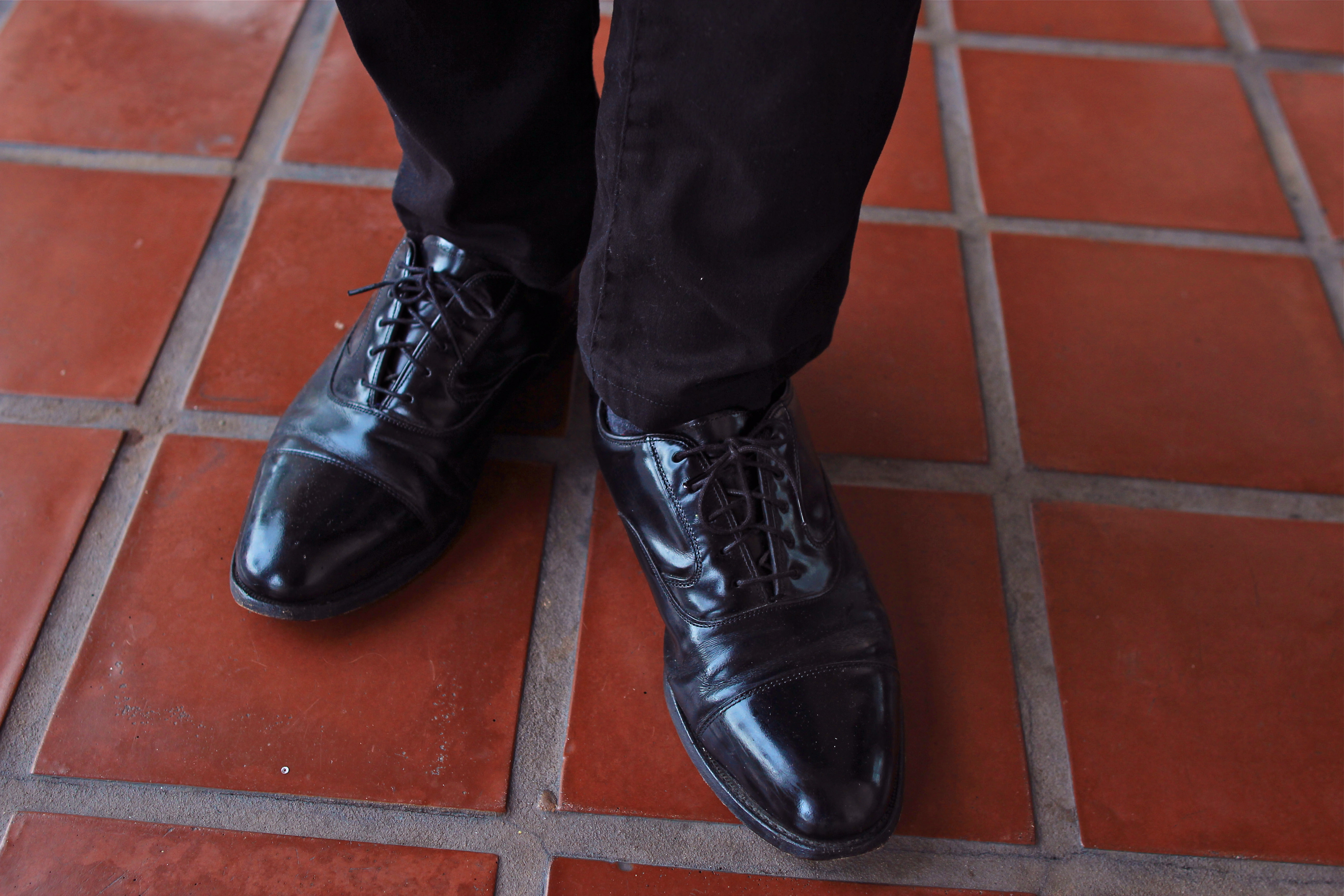 2.  “The Grey Inbetween” on Spencer 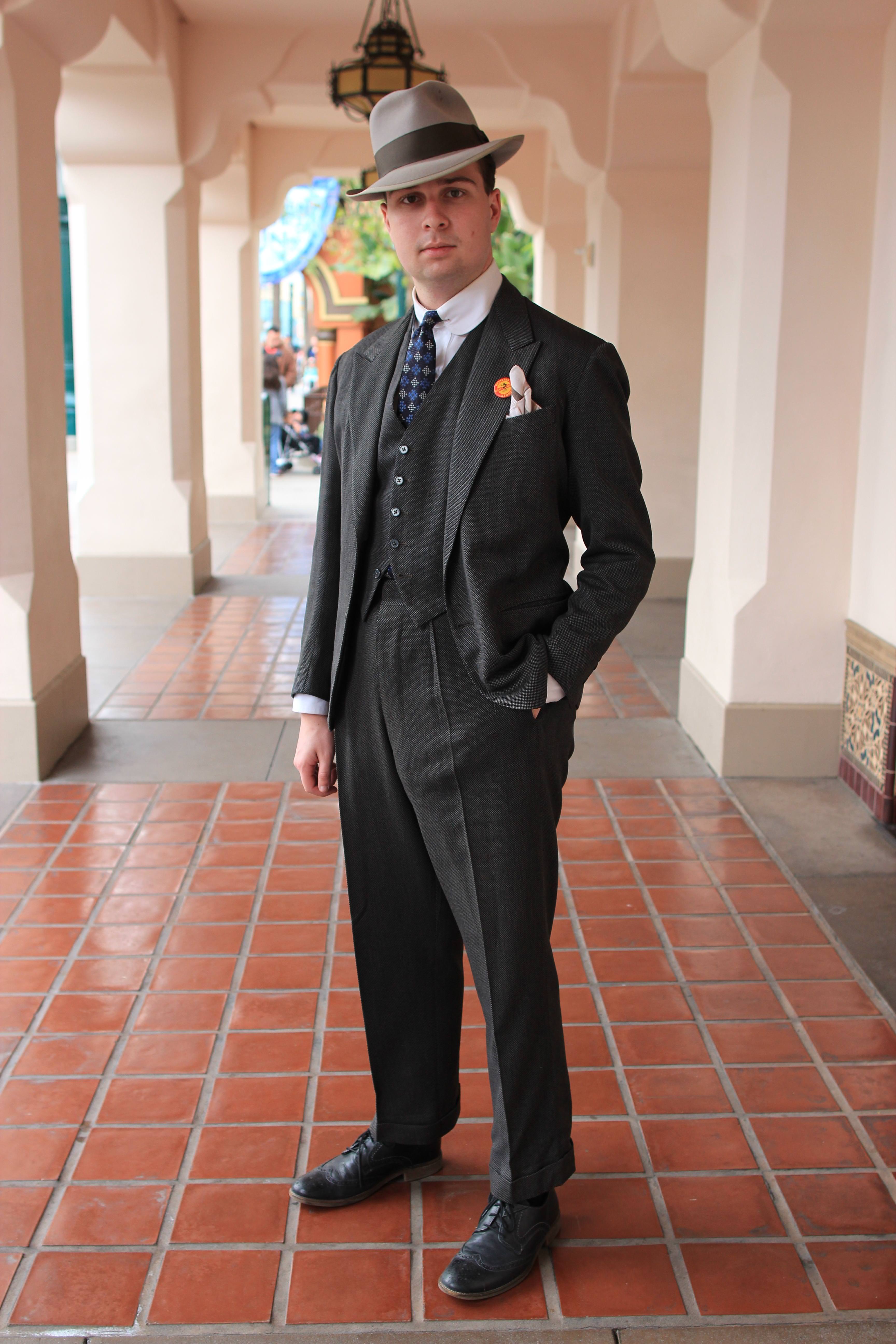 Now he’s wearing the “inbetween” because of a variety of reasons.  His suit is fitted on top, and has a little bit of a wide leg, reminiscent of the 1930’s.  For a shirt, he wears a detachable club collar shirt and a tie that makes his look from the 1920’s.  However, he wears a fedora which was big in the late 1920’s to the 1930’s!

The real kicker is his suit:  It’s from 1954!  Saville Row was and still is one of the best places to get a suit because they were bespoke or specifically made for the person who ordered it.  This particular suit was definitely made in 1954 (or finished) because it says so on the inside label! That’s the best thing about wearing vintage clothing; there is history all over it.

Just like a typical day, Spencer wears more conservative clothing when wearing a suit.  His suit has a sort of birdseye pattern and he only adds the pop in the tie (which incidentally has silver to help ground the colors of the suit).  He finishes off this monochromatic outfit with a grey fedora! 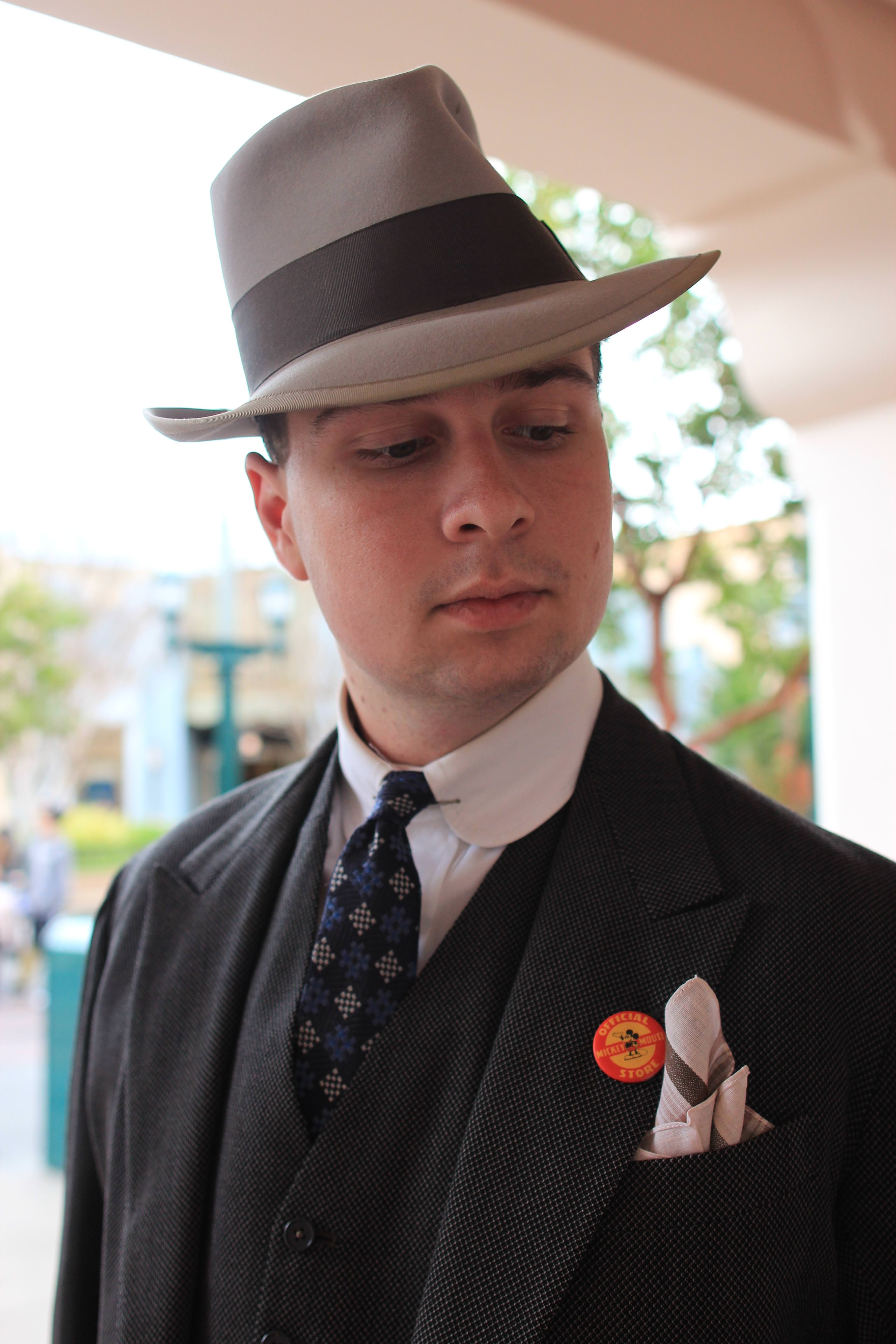 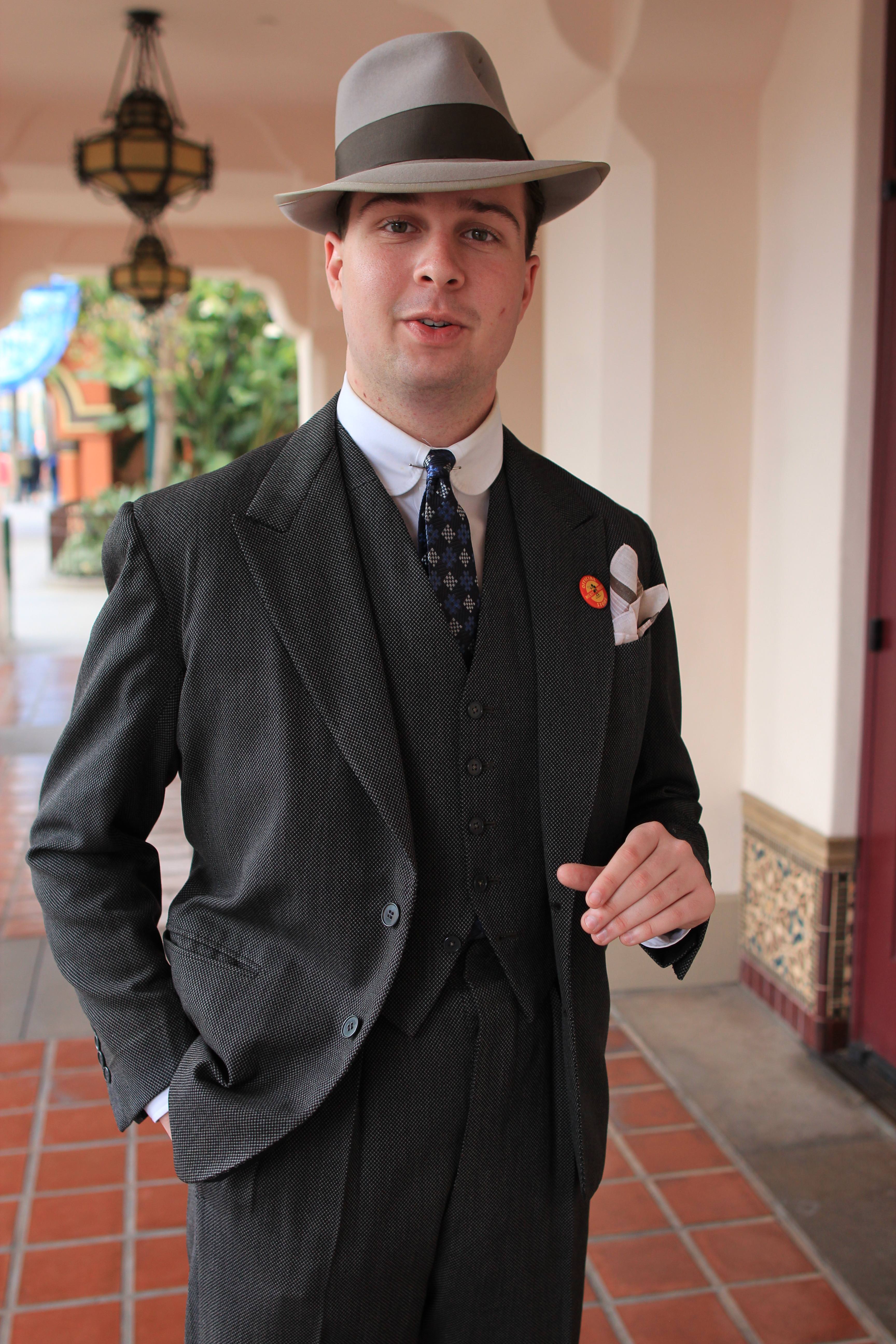 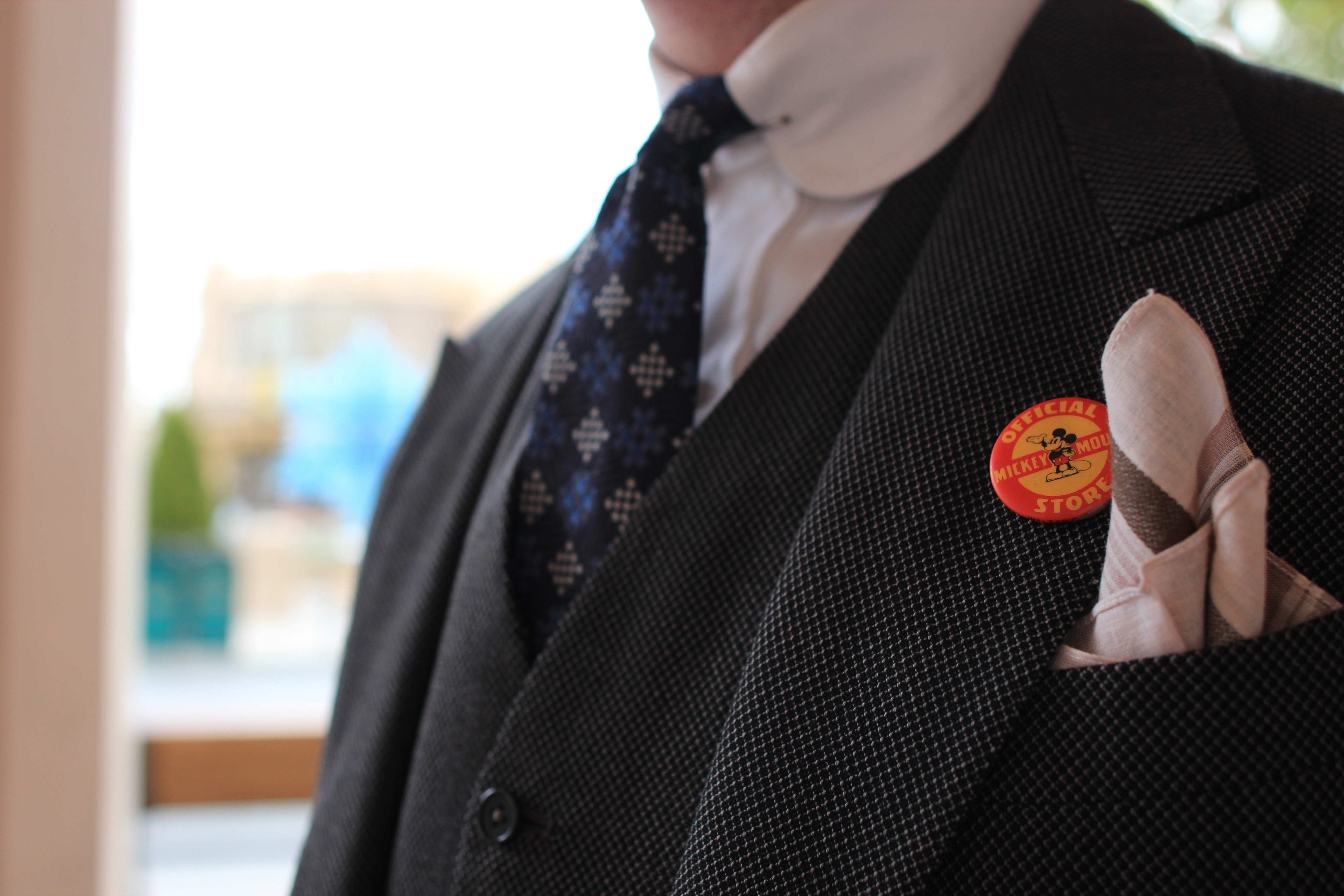 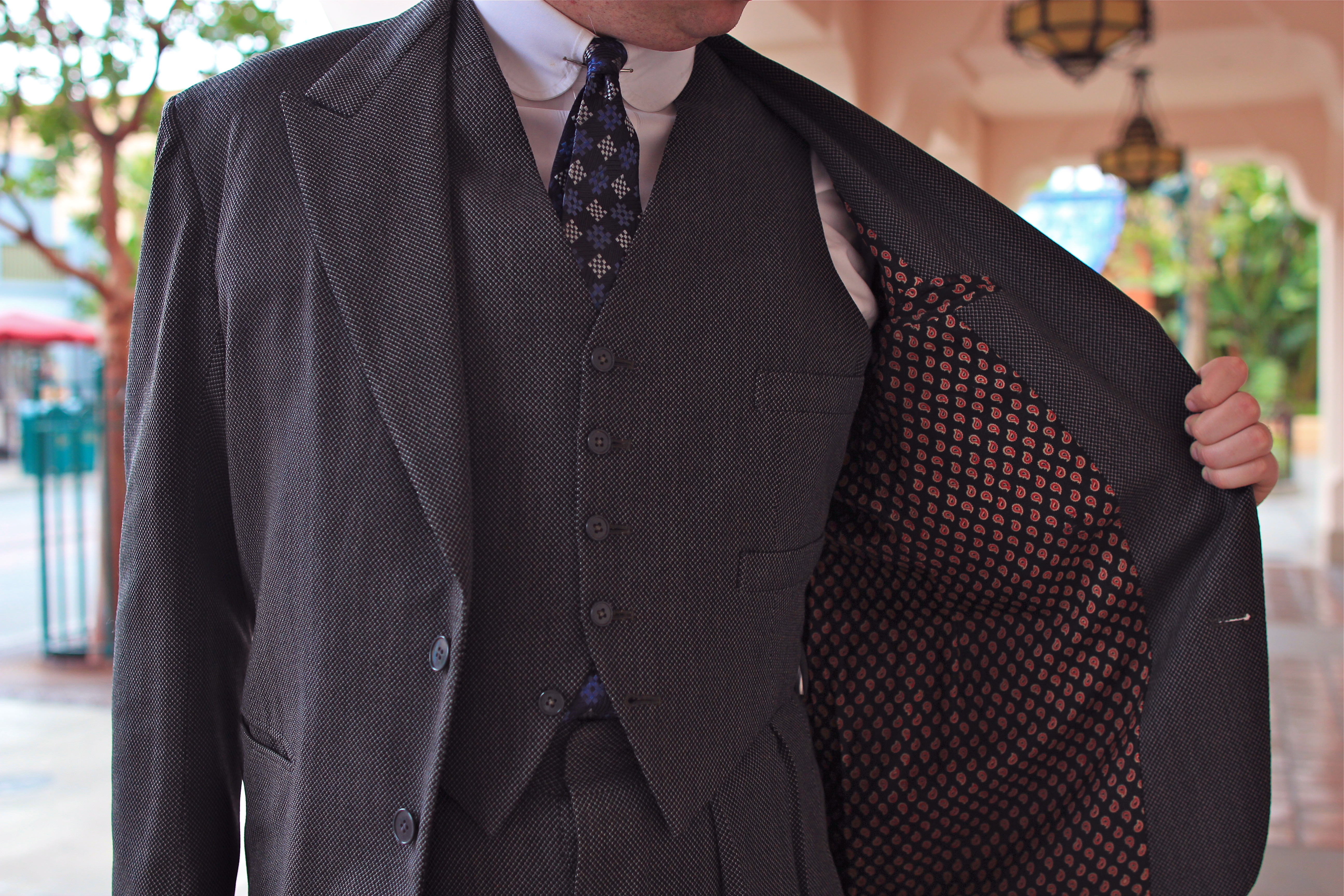 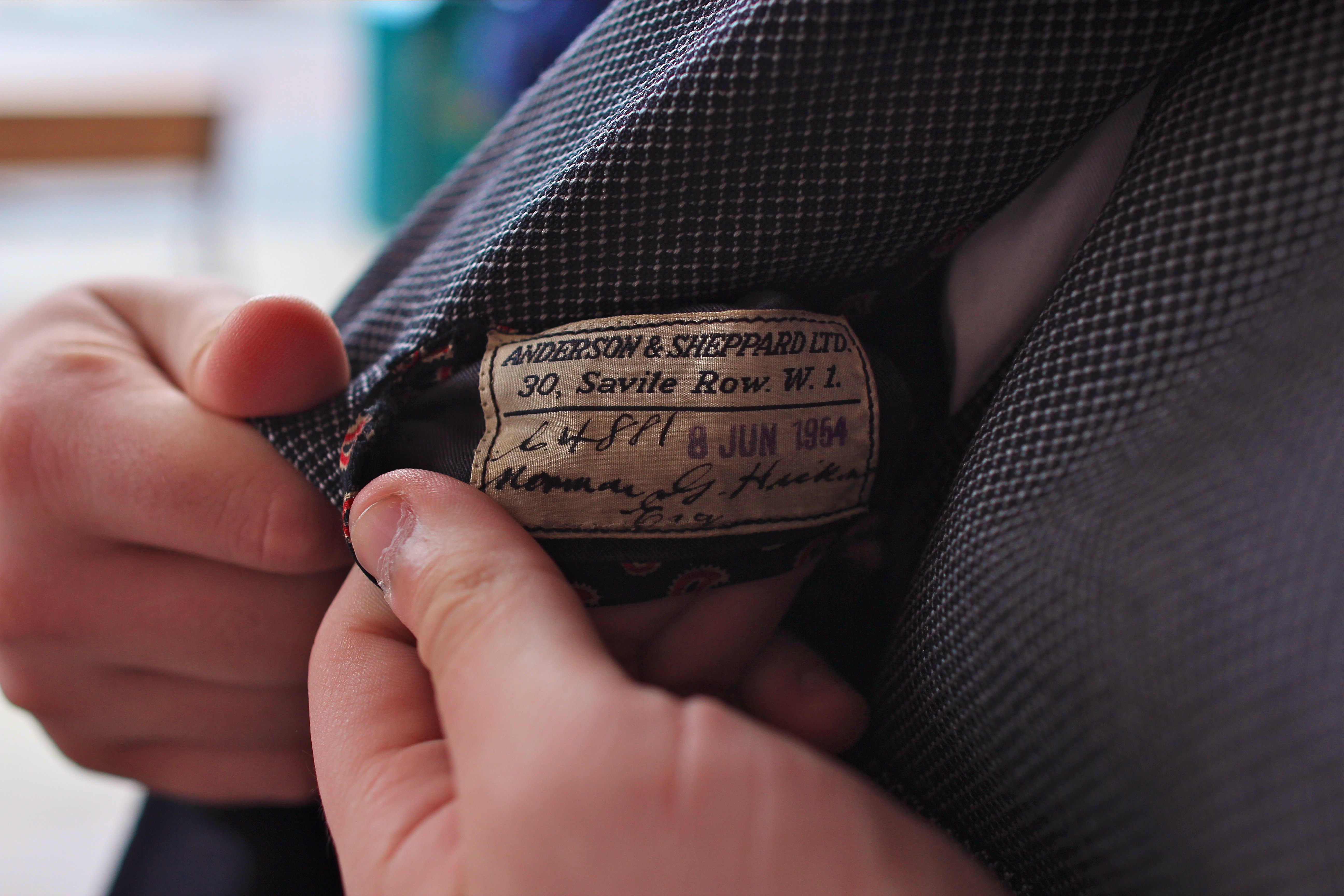 Check out that stamped date and address.

3.  “The Definition of Dapper” on Ethan 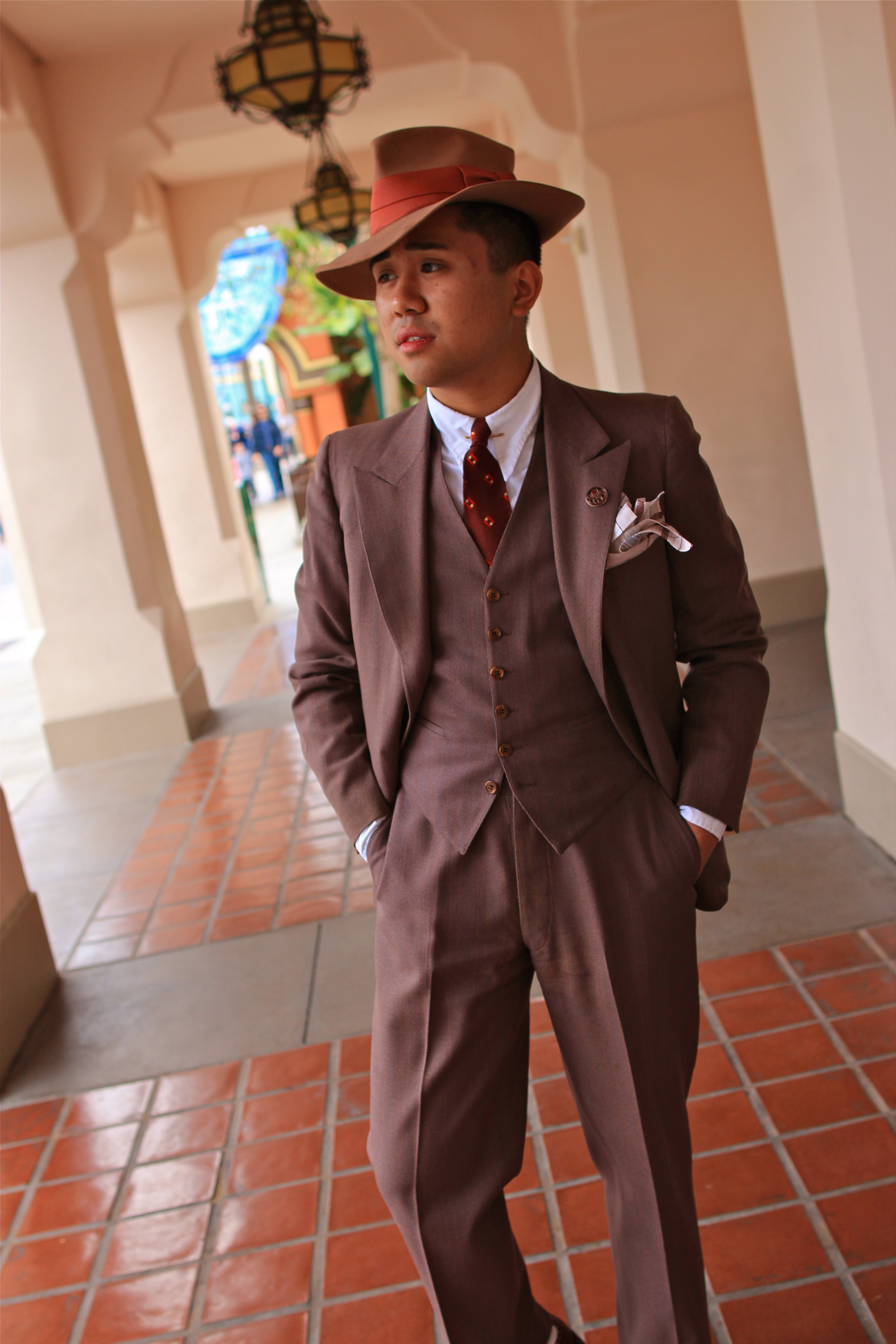 Gatsby wore a brown suit in the 2013 film and I decided to do so as well.  Taking a page out of Spencer’s book, I decided to go monochromatic as well, wearing shades of brown.  My suit, unlike Spencer’s, is from the 1930’s and has an awesome purplish-brown colour with orange stripes.  You don’t get much of those patterns or fabrics today.  The sharp peak lapels, just like the rest of our outfits, are simply the best type of lapel for a single breasted jacket.  They give all the power of a double breasted jacket to our single ones.

To ground it, I wore a custom made spear point shirt, which has downward angled collars, with a collar bar.  These items simply add to the overall dapper and dandnyness of the outfit.  The fedora is a large brimmed one, made in the 1930’s by Borsalino, one of the biggest hat makers in the world both then and now.  I didn’t have a Disney pin, but I did have something Disney related… 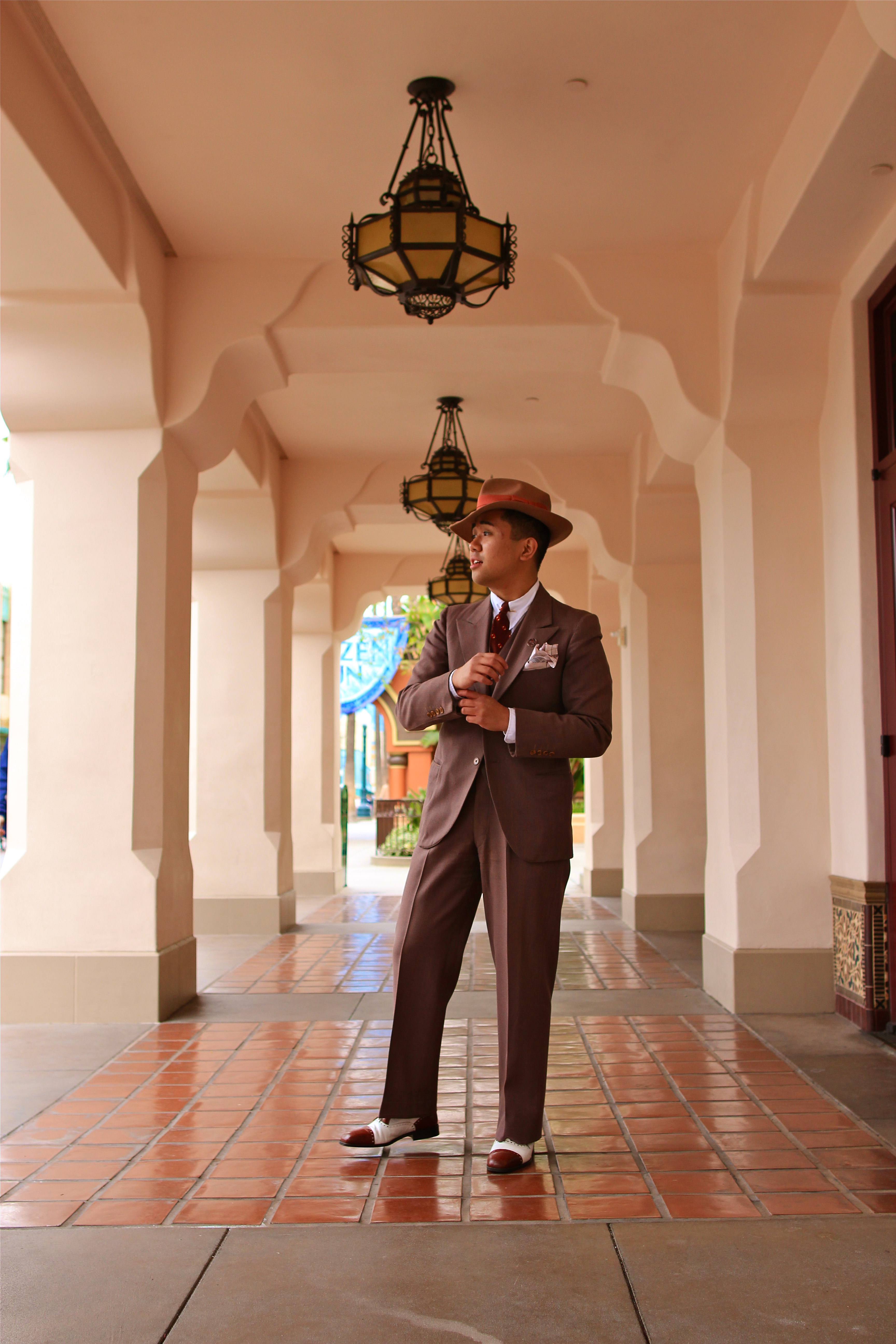 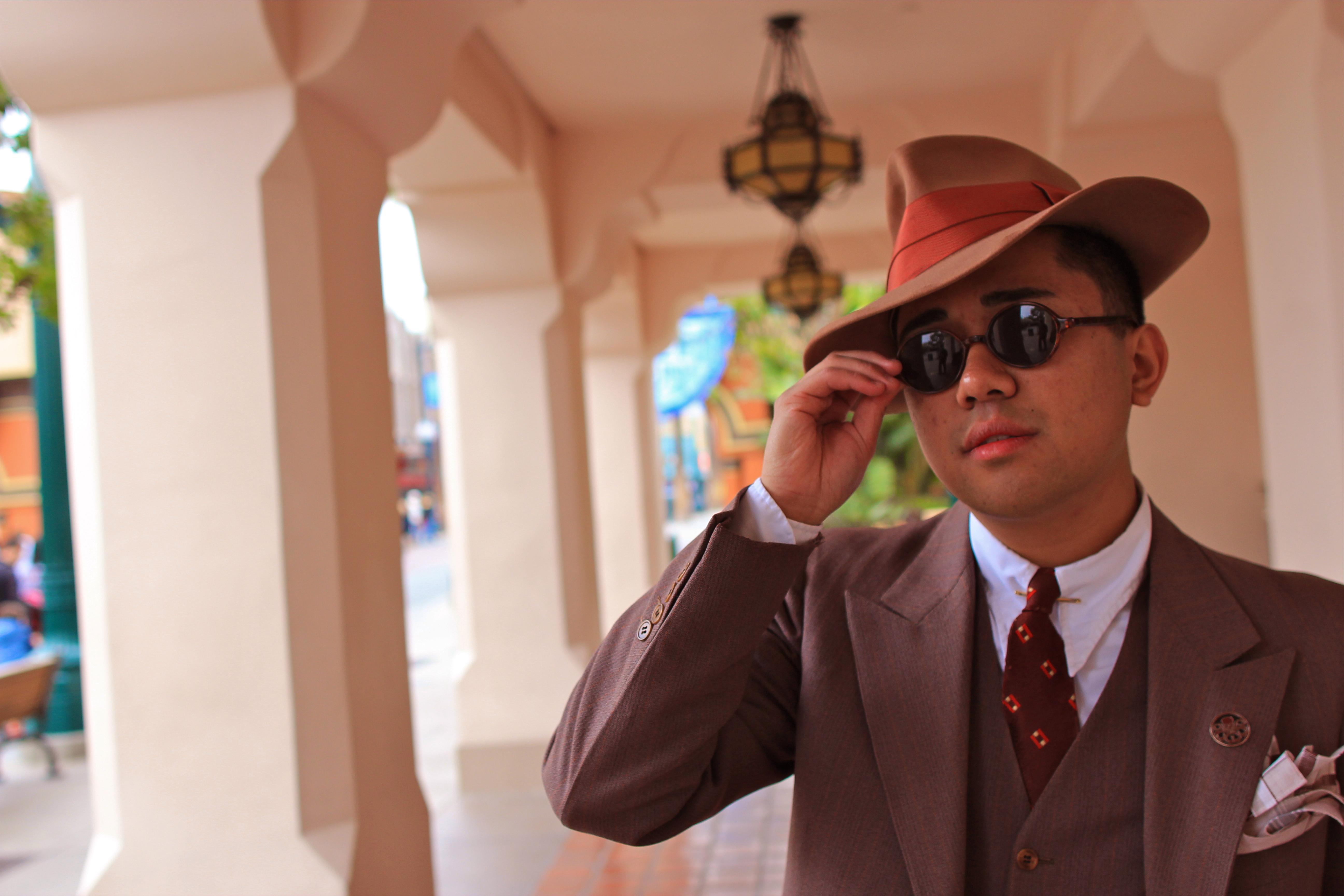 I call these the Gatsby sunglasses. 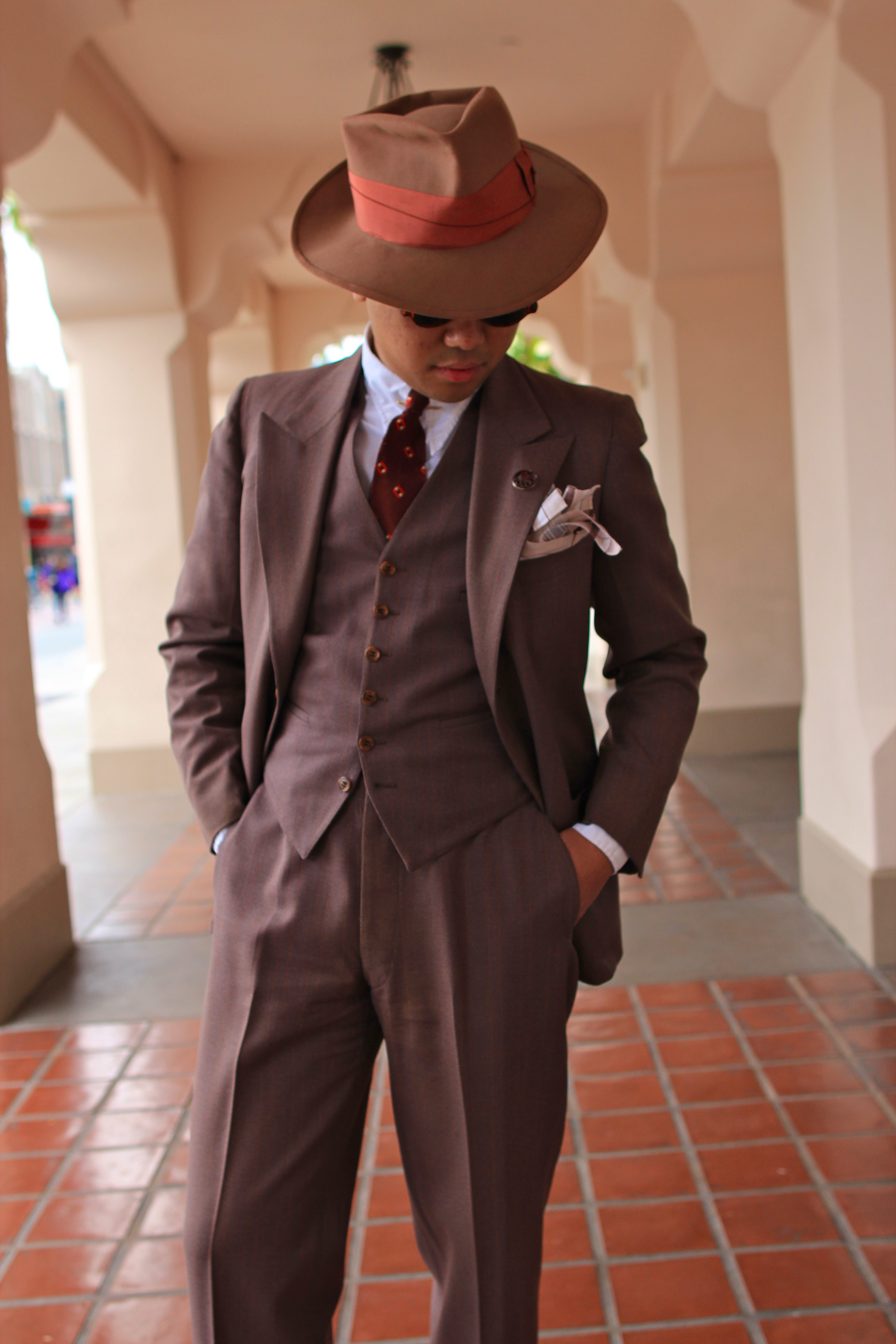 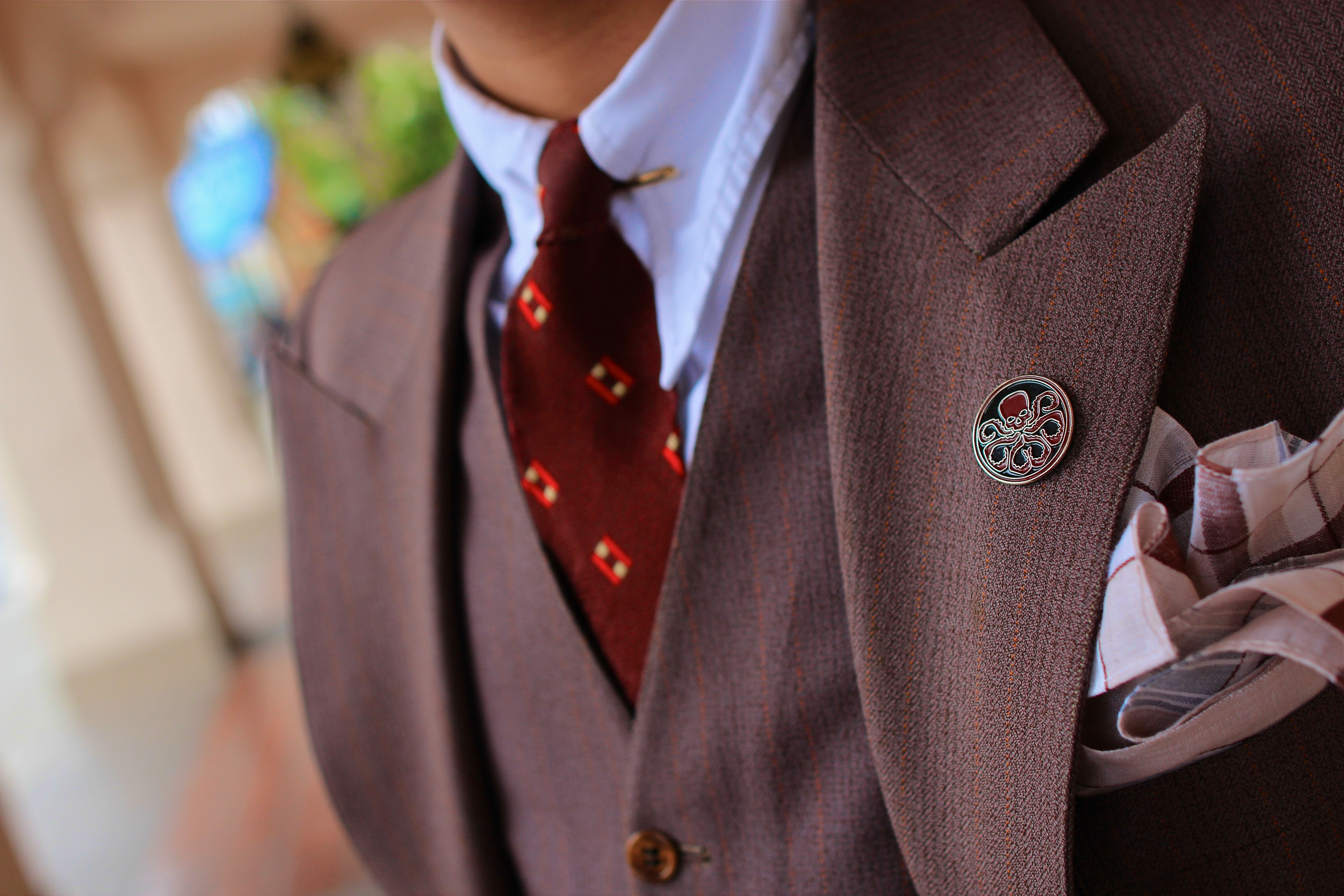 Check out that orange strip. 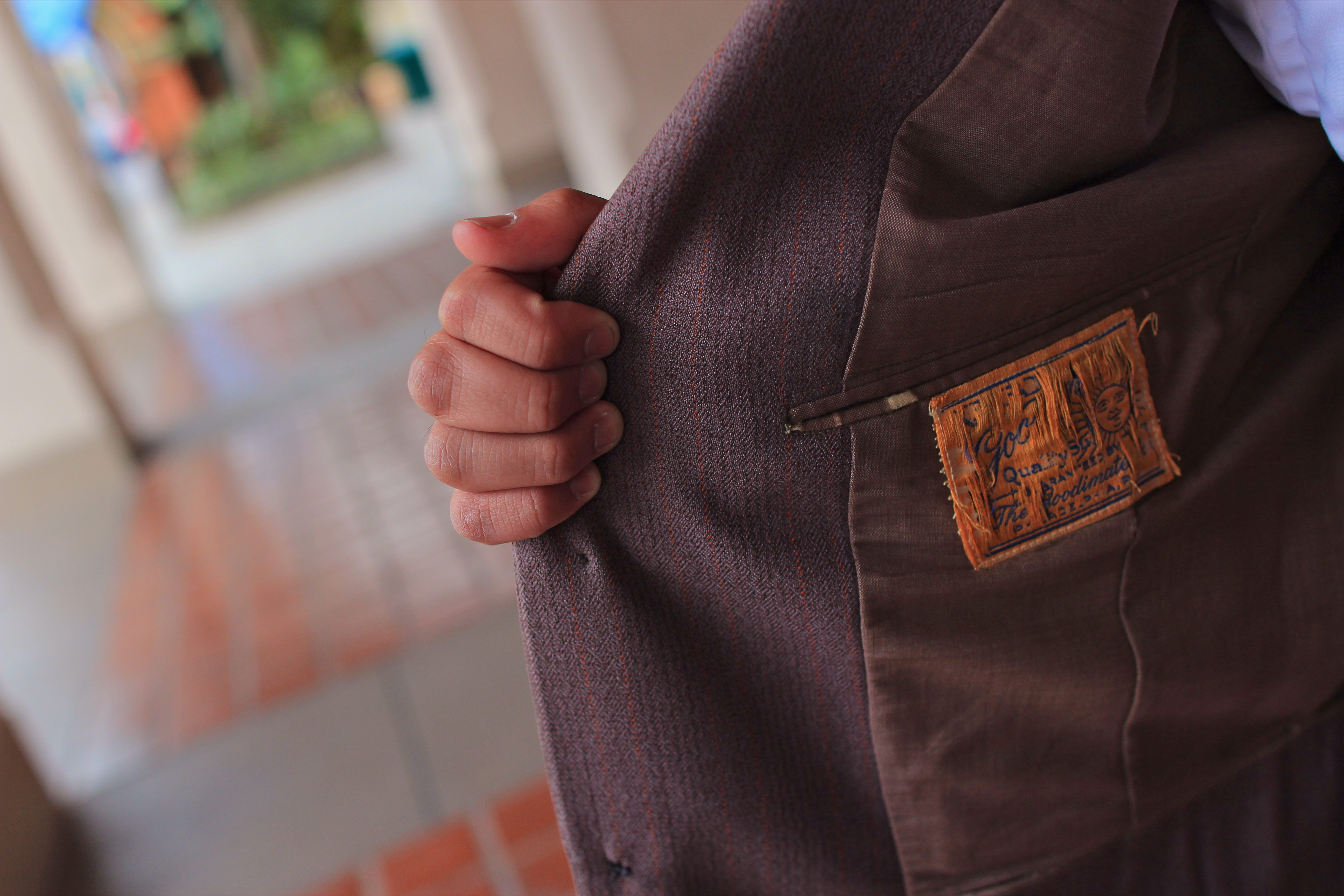 The label is slowly going away, but as always, pay attention to detail! 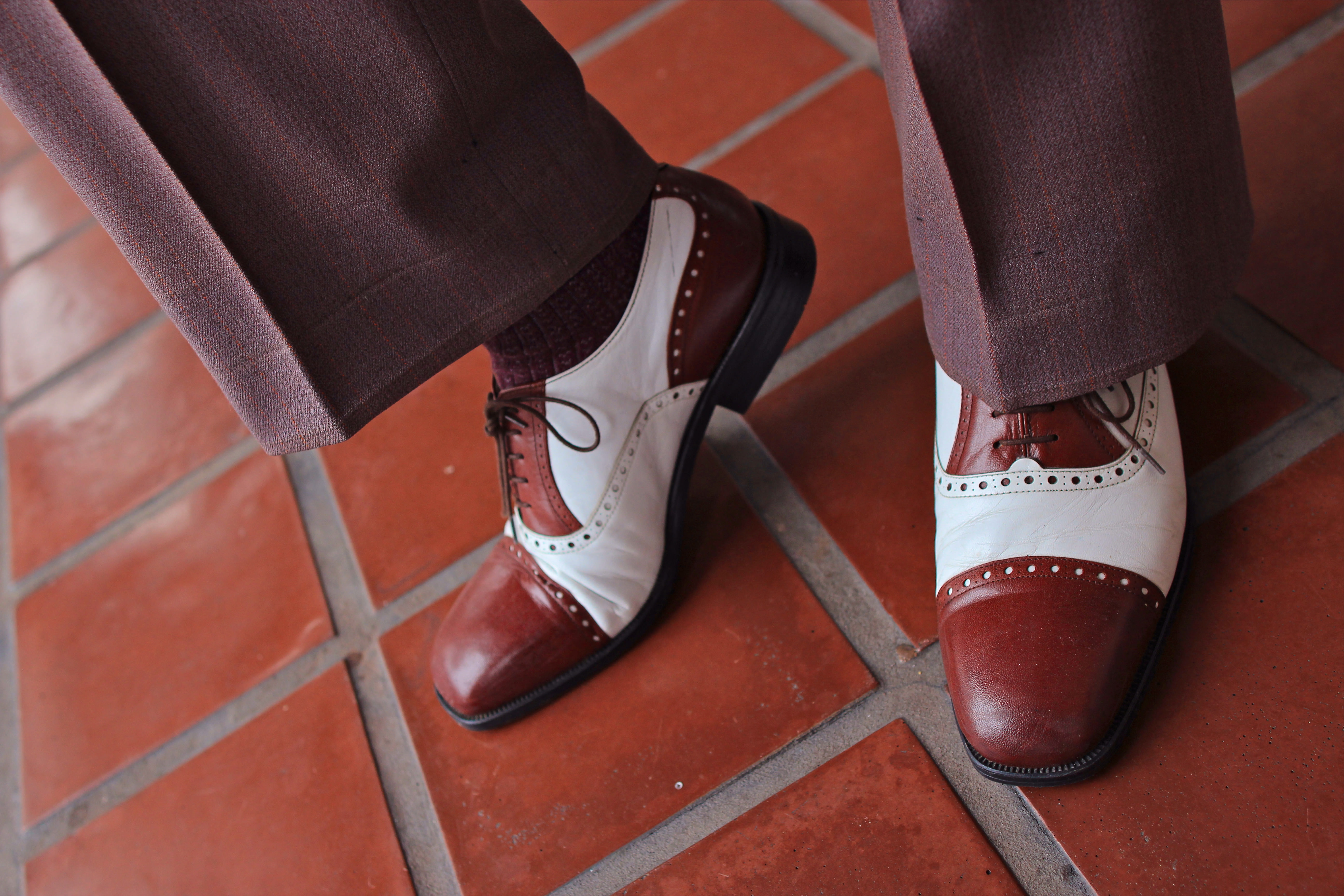 These shoes go with so much.

So there you have it!  Our three truly vintage (or at least mostly) outfits. Now we realize that Dapper Day isn’t about dressing vintage, it’s about dressing up.  While we advocate vintage clothing, you don’t have to do it if that’s your style!  We saw many people dressed in very creative or interesting ways on Dapper Day, and that’s what we want to see!

So what did you wear to Dapper Day?  Which vintage outfit was your favourite (I’ll take your silence to mean that I win.) Let us know below!