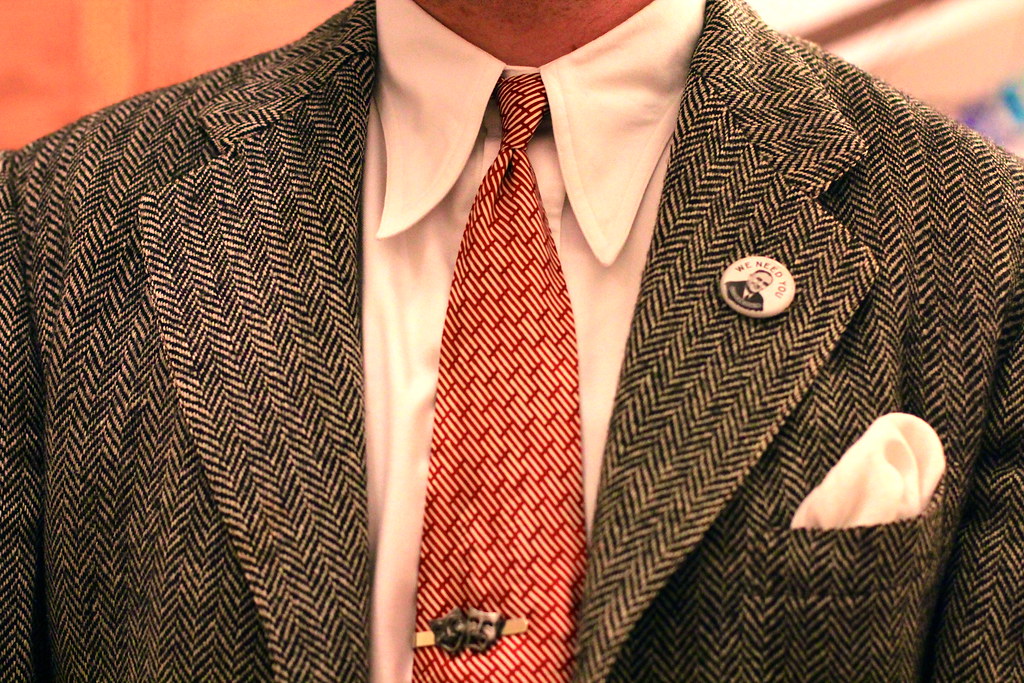 It’s been a while since we’ve seen some other vintage styles!  Luckily, I was invited to McGinty’s in Pasadena for a preview opening of their new menswear section.  Apparently, all of this stuff has been kept in storage containers for 14 years and now we got to take a look!  Even though there was some awesome stuff for sale, the guys that went didn’t look too shabby either!  Here’s some great looks! 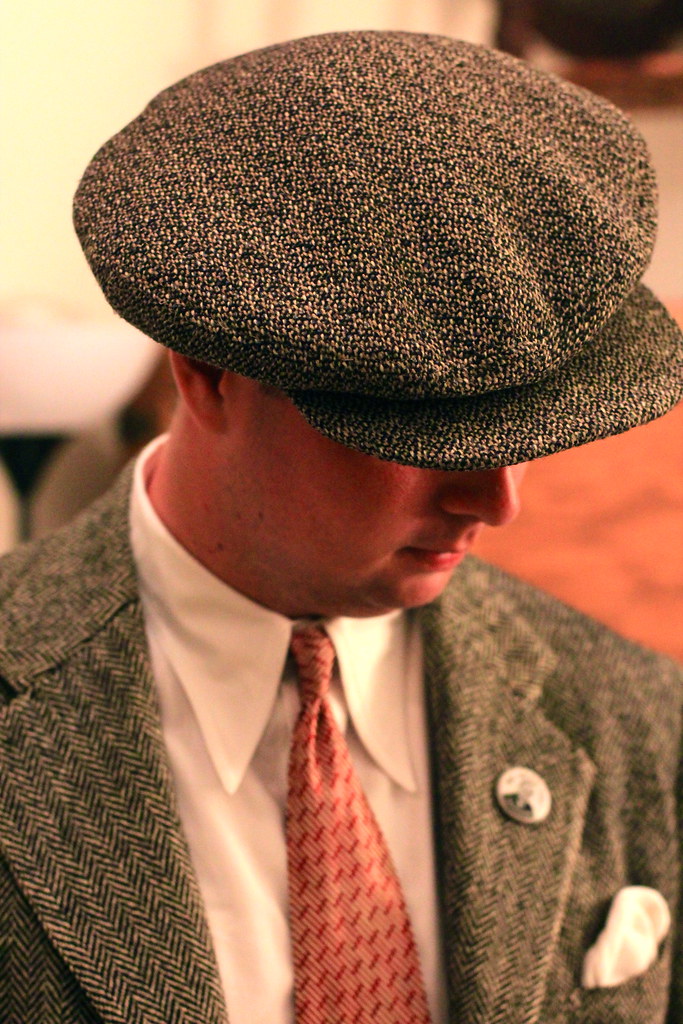 Can’t you tell Spencer loves that cap? I couldn’t get a full body shot because it was pretty cramped at the store, but we’ve seen this suit before.  It’s a 1940’s herringbone suit, which is comfortable yet thick.  I do’t know how he’s surviving, but he tends to do this! 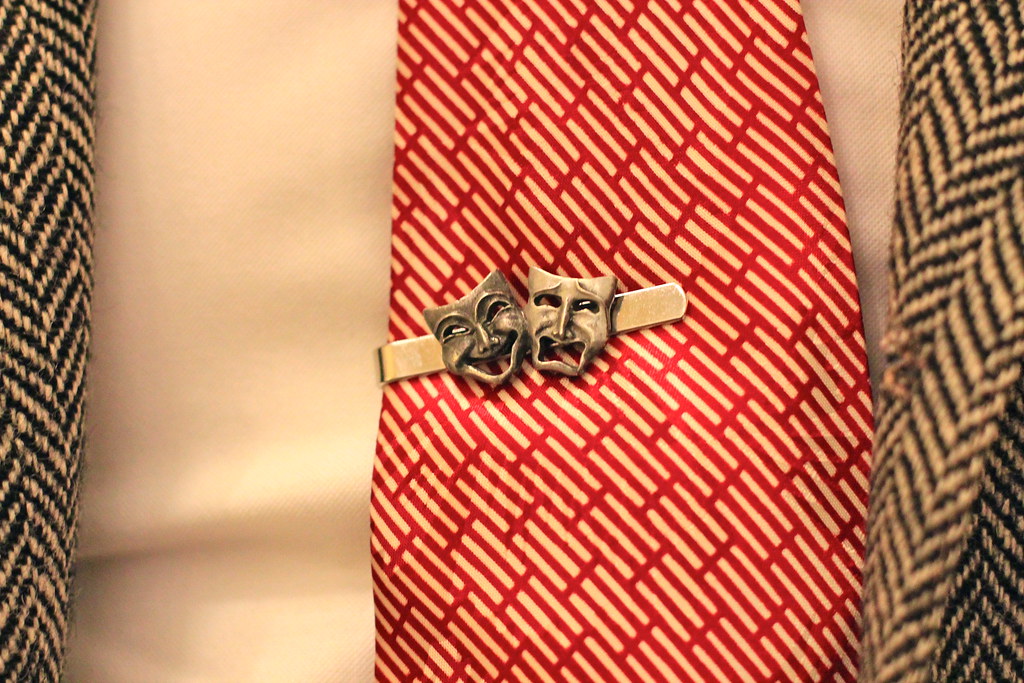 Spencer’s a drama man, and he’s gotta represent that with this awesome tie bar!  Dressing up is never boring; it’s actually filled with personality! 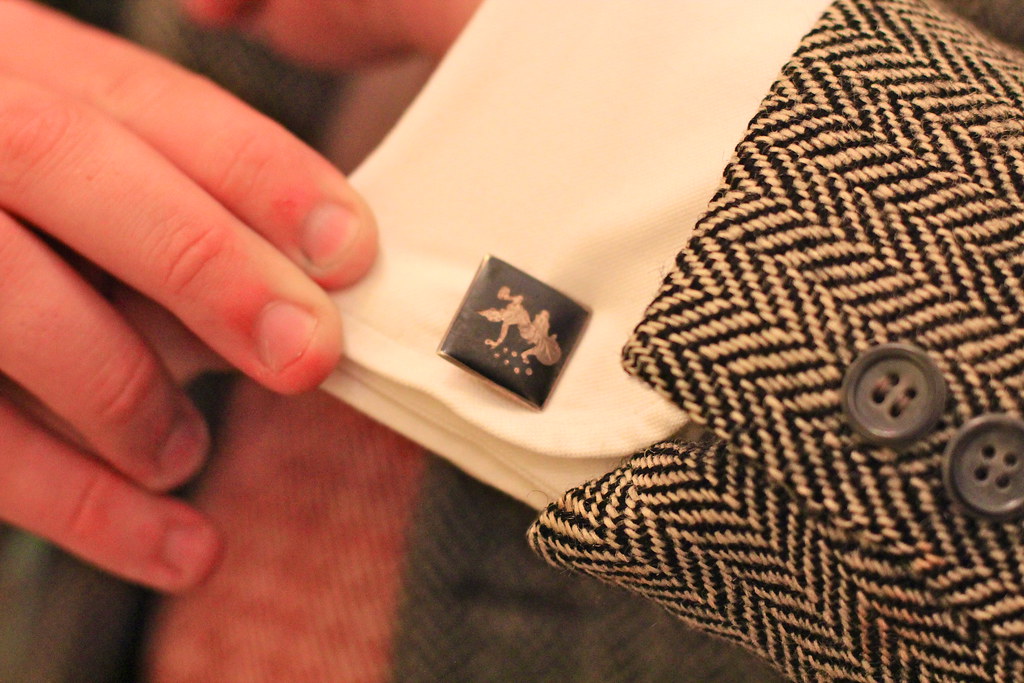 Check out those cufflinks! I’m personally not a fan of cufflinks (since I like rolling up my sleeves), but for Spencer its another great way to show off your stylistic choices! 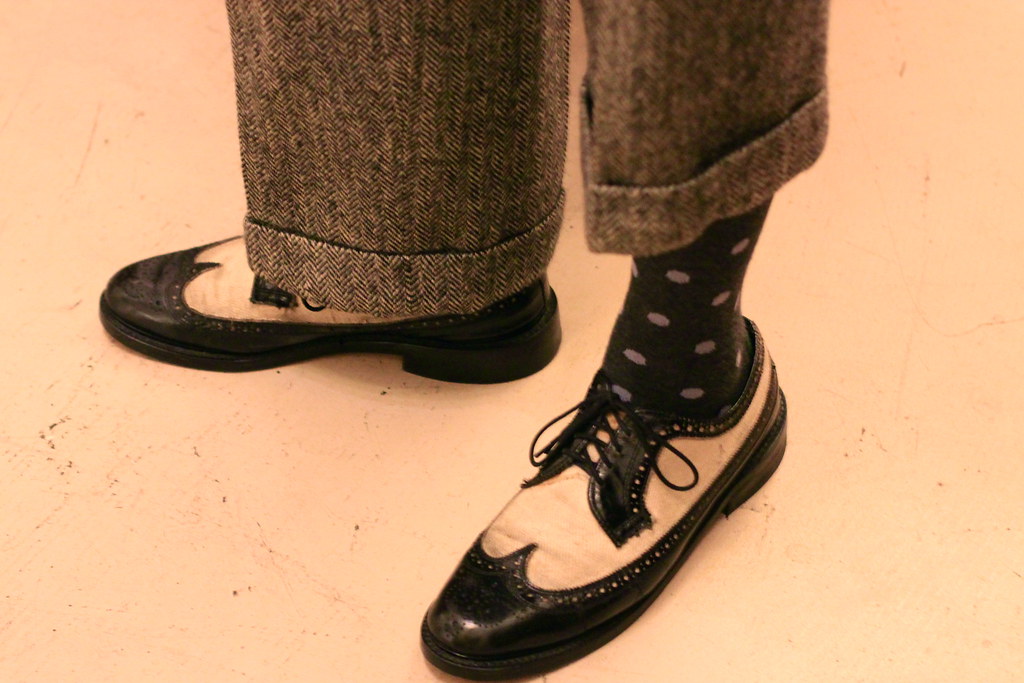 Spencer finishes strong with freshly cleaned black and white spectators.  He even adds to the fun with patterned socks!  If you haven’t stepped up your sock game, you should start.  Ditch those damn plain ones! 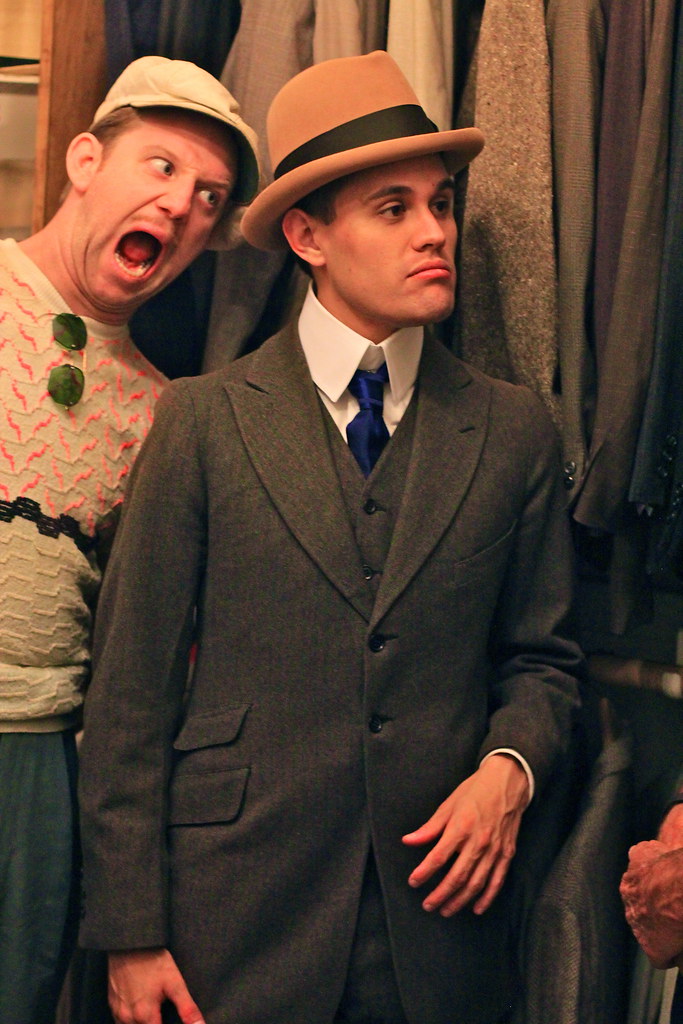 This is the oldest item I’ve seen on someone!  Dylan is wearing really late teens (1910s) or early 1920’s.  While his suit has a peak lapel, it’s very angled and is meant to have both buttons buttoned.  And check out that ticket pocket!  This isn’t the 60’s! 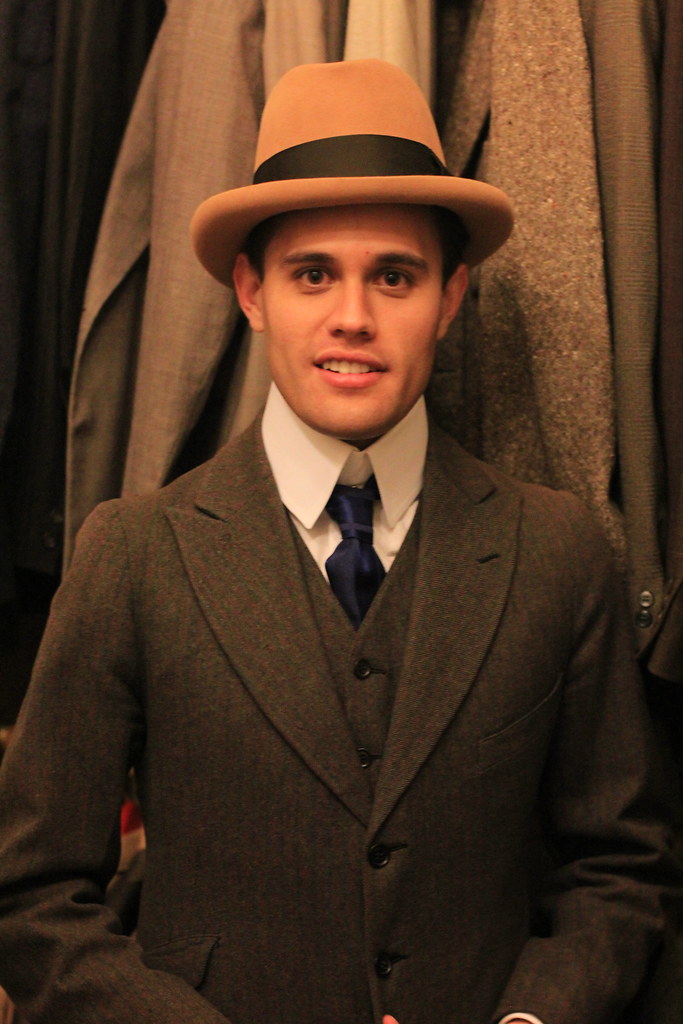 He’s also got on a homburg, a hat that faded into obscurity in the 40s.  It’s now known as a “godfather hat”.  For Dylan, it’s typical for the 20s though! 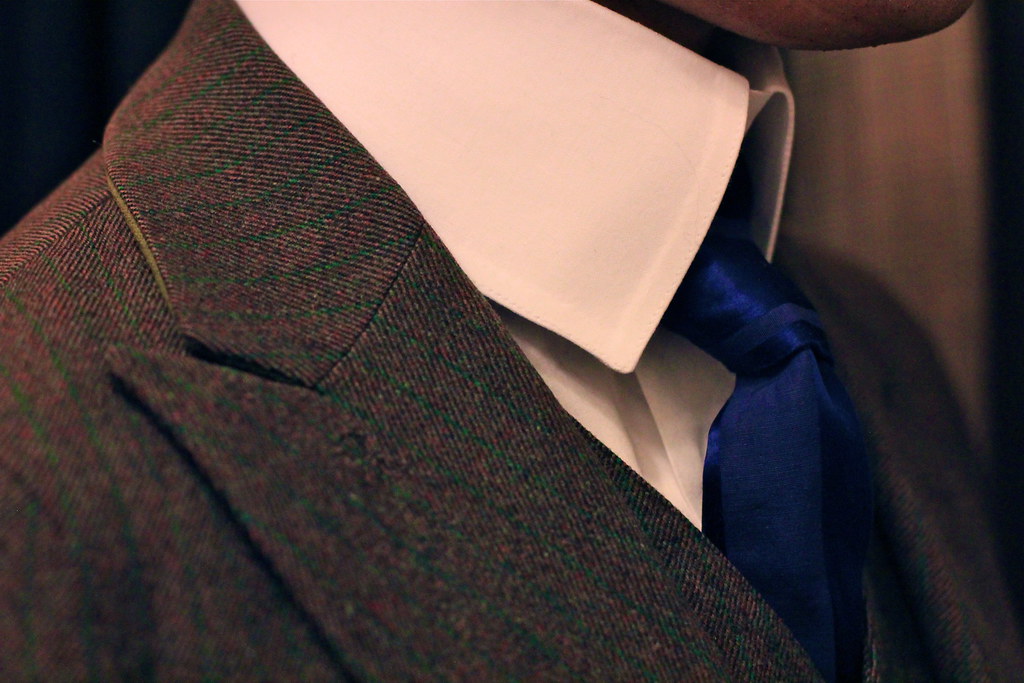 One item that definitely makes this a pretty old look is Dylans’ stiff, detachable, high collar. I touched it guys, and it is hard a a rock.  Not my style, but super authentic.  While we’ve got the details, look at the fabric on the suit.  It’s got some red flecks and a deep green stripe!  They don’t make fabric like this anymore! 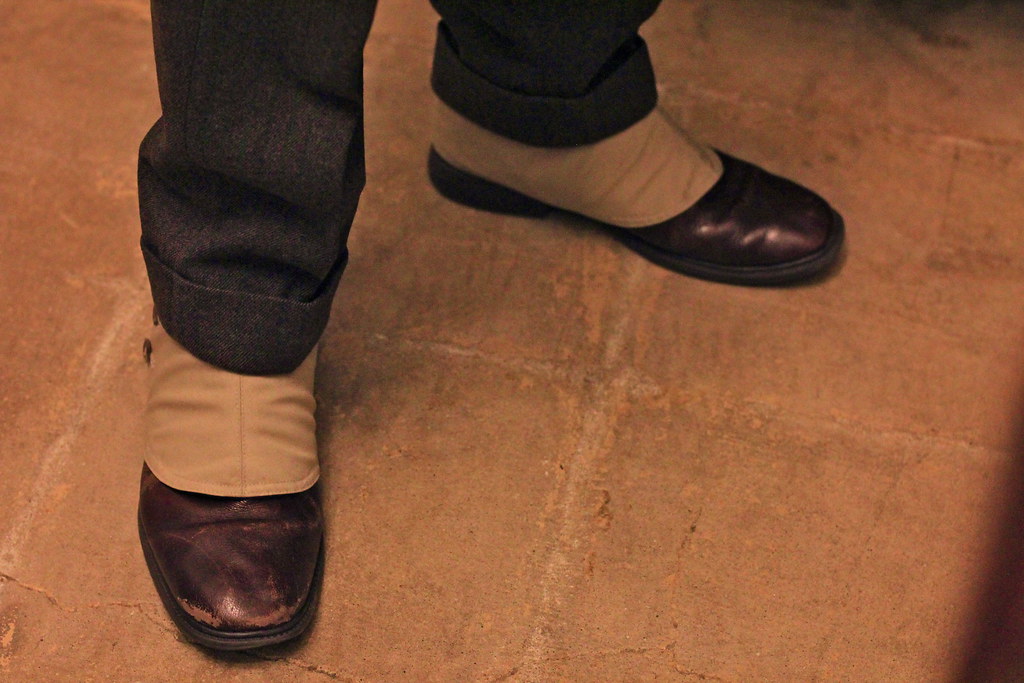 Spats were made to cover the shoes from mud and eventually, the aesthetic became the spectators we all know and love today! 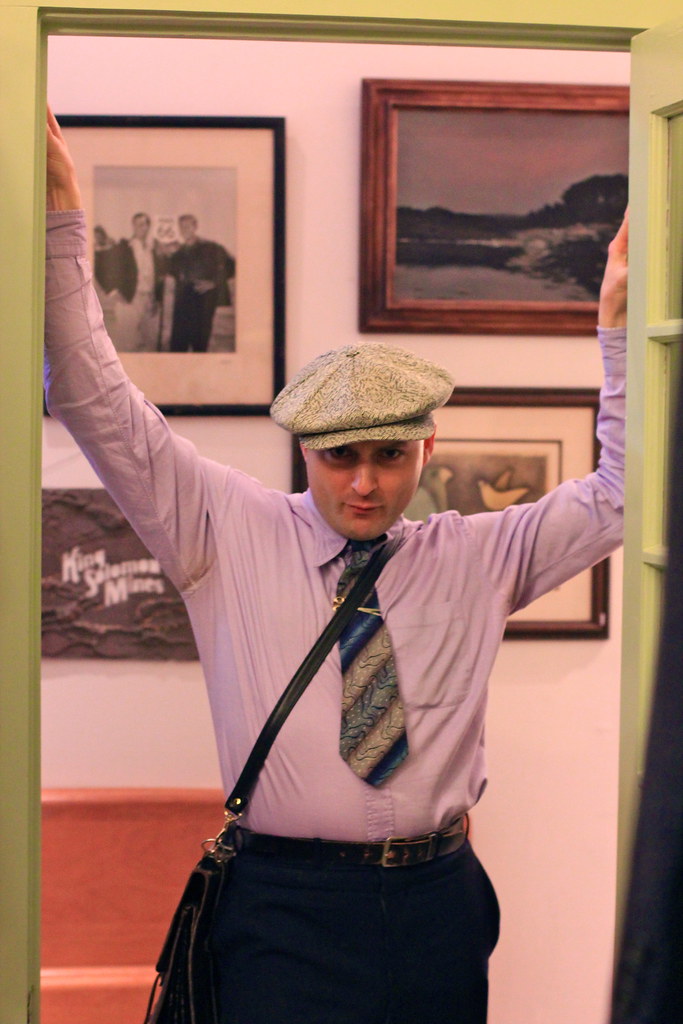 Tyler’s got a pretty simple vintage look!  He’s got an awesome mauve shirt with a spear point, a 30s(?) te, and some nice black trousers.  Finishing with a cap and a vintage shoulder bag make him ready to tackle the day. 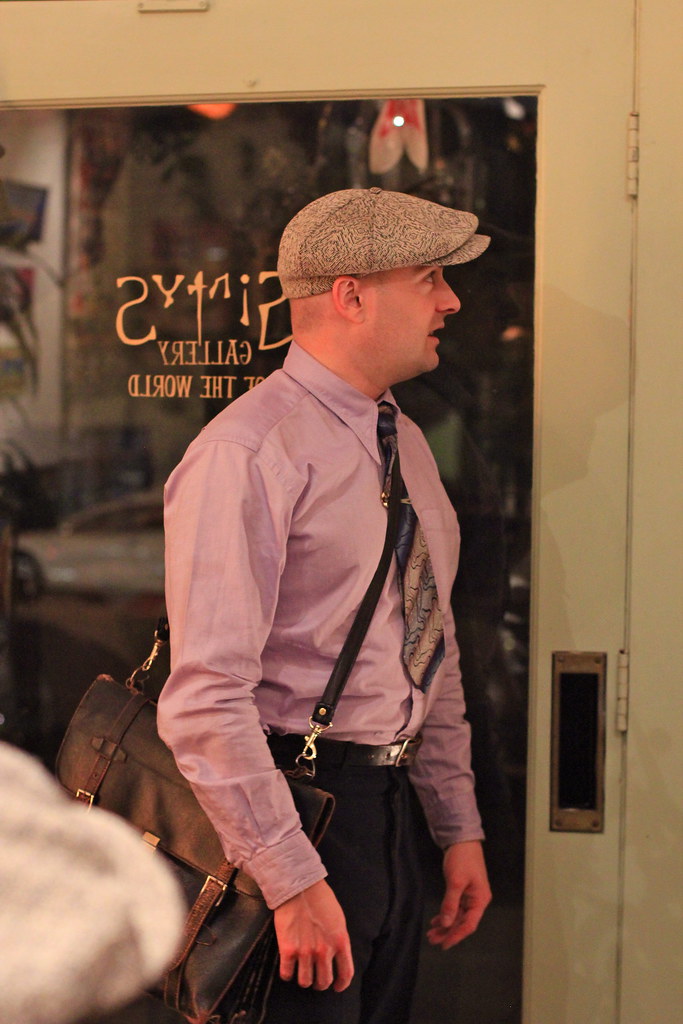 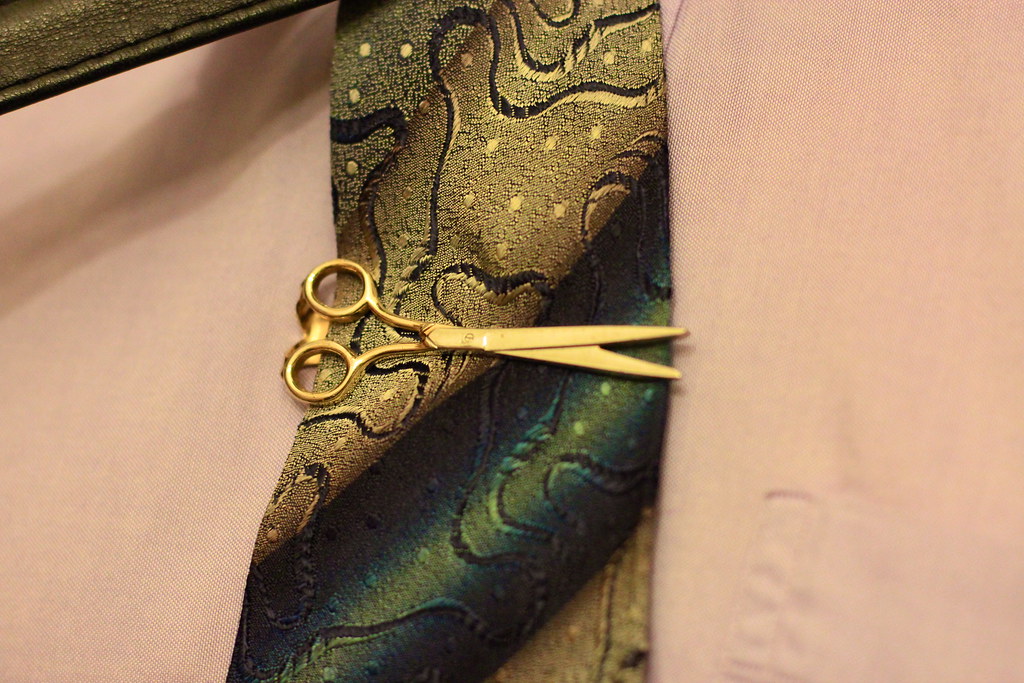 Who said dressing up has no personality?  Check out this fun tie bar! 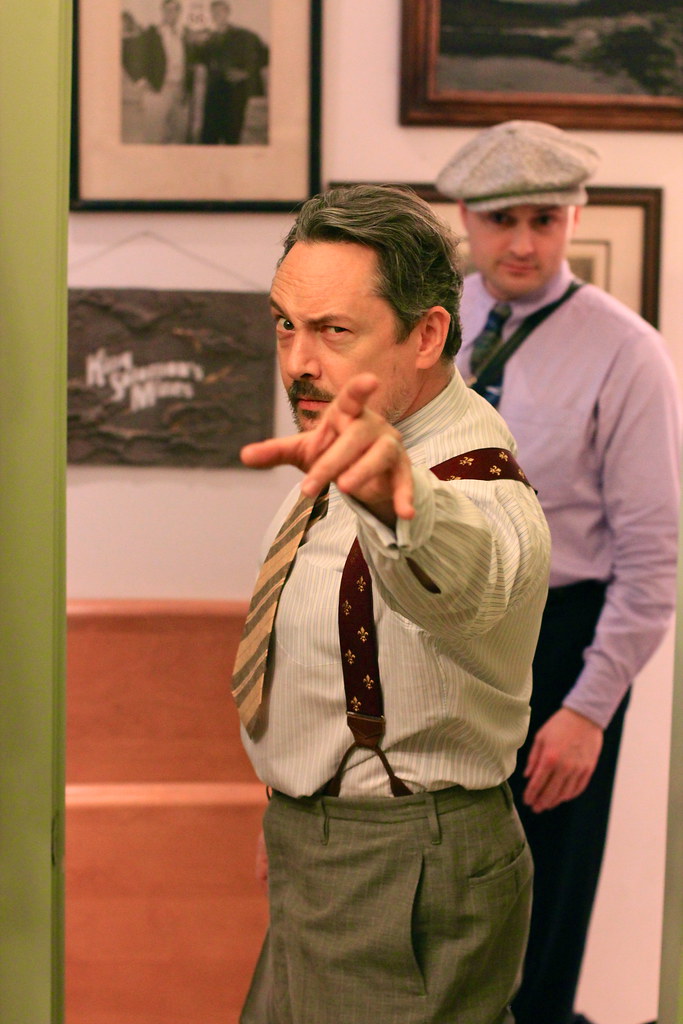 Nathan had my favourite outfit of the night!  I wish I got a shot of him and his full suit though, but it was a 1930’s pinstripe Brooks Brothers suit.  The best part of it all was that it was so freakin’ light!  I thought he’d be dying in this summer heat, but he was actually keeping (and looking) cool. 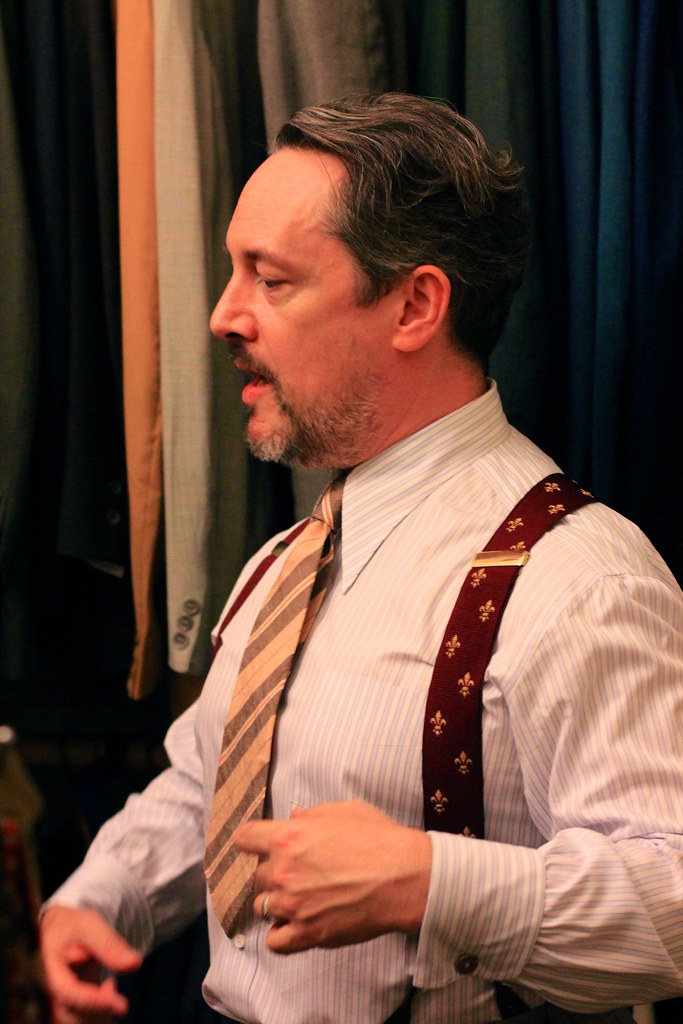 Like most vintage guys, he’s got a custom spearpoint shirt from Luxire, which is stunningly long.  He’s got all sorts of patterns in his look, but he knows you’re supposed to keep it scale.  Large pattners of the tie over the small/medium stripes of the shirt.  Nathan’s a very impressive dresser and he looks great without any effort at all. 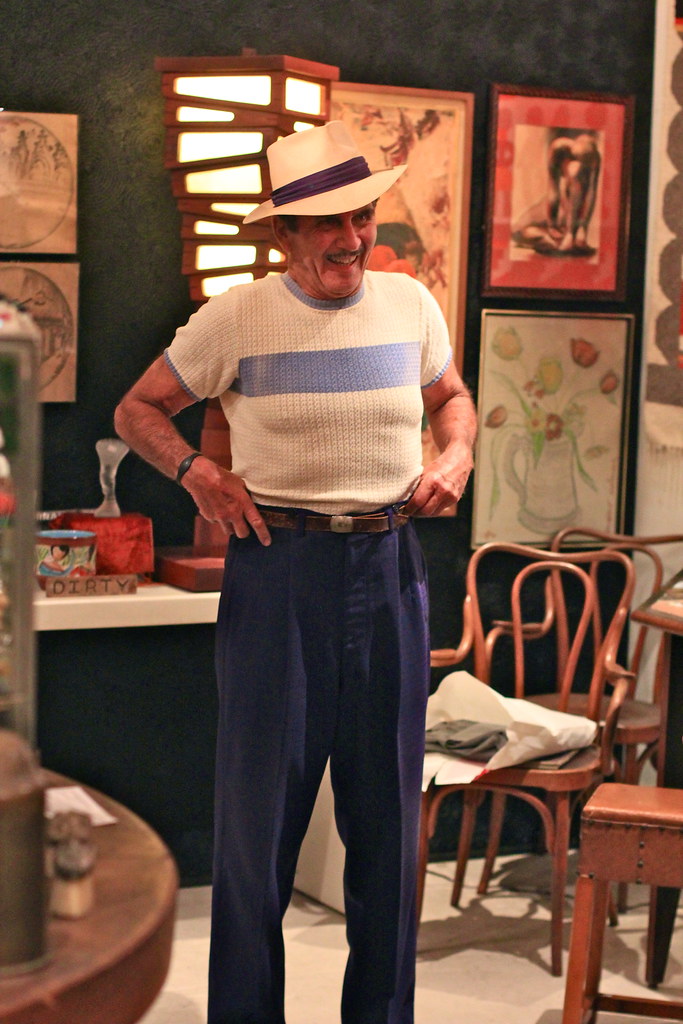 I’m assuming that Steve’s outfit is from the 1940s.  He’s got some simple colors going on:  blue and white.  His marvelous high waisted pants add some length to his figure and the knit tee he’s got on fits superbly.  T-shirts should fit you well and shouldn’t be baggy or loose. 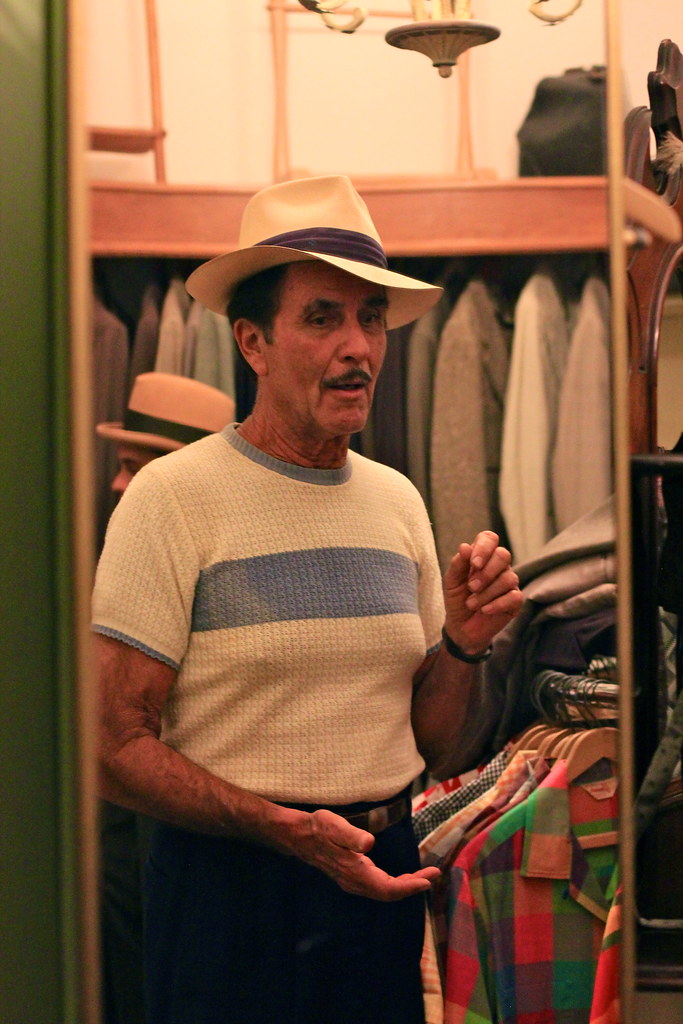 Nothing says summer like a tiled straw panama!  I gotta get a vintage one of these! 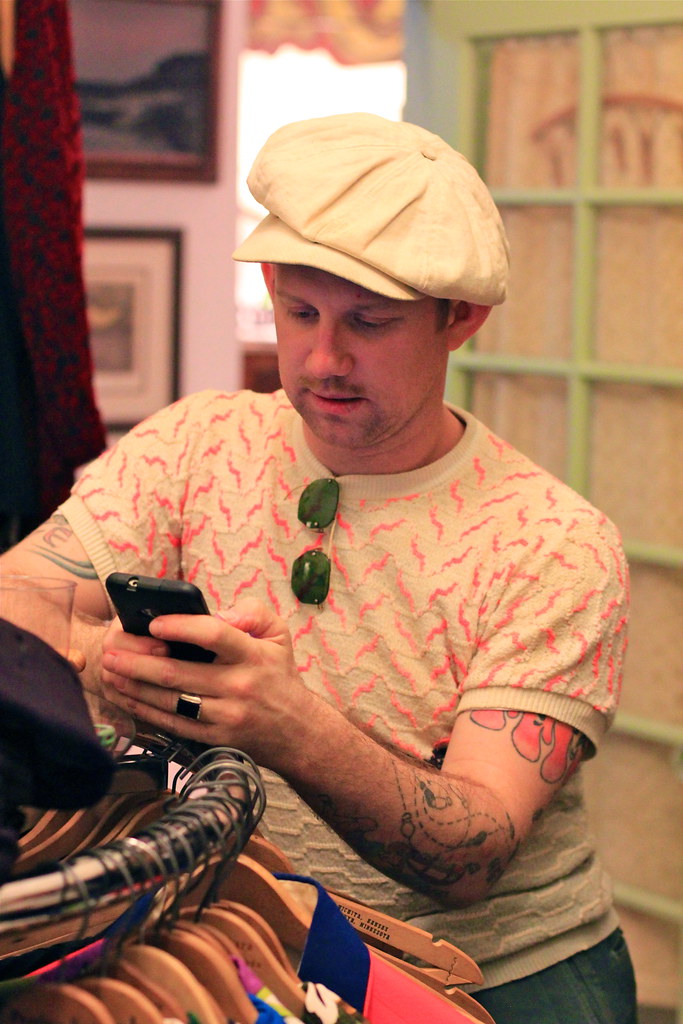 Master Reese of Reese’s Vintage Pieces always wears some of the weirdest stuff I’ve seen. He’s got a linen newsboy, with an insanely cool 50’s knit shirt, and octagon shades.  Nothing’s past the 50’s for him, yet this look was definitely replicated in the late 60s and early 70s. 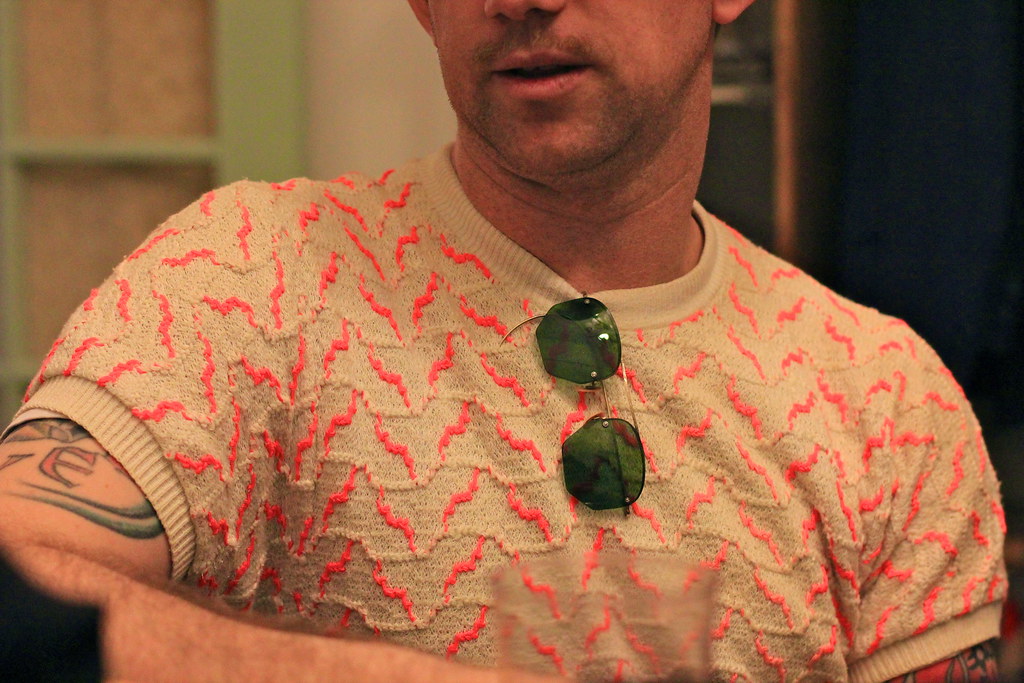 Pink lightning stripes.   Benny told me that this fad later came back as pink cars were sweeping the nation in the mid 50’s.   Would you wear this? 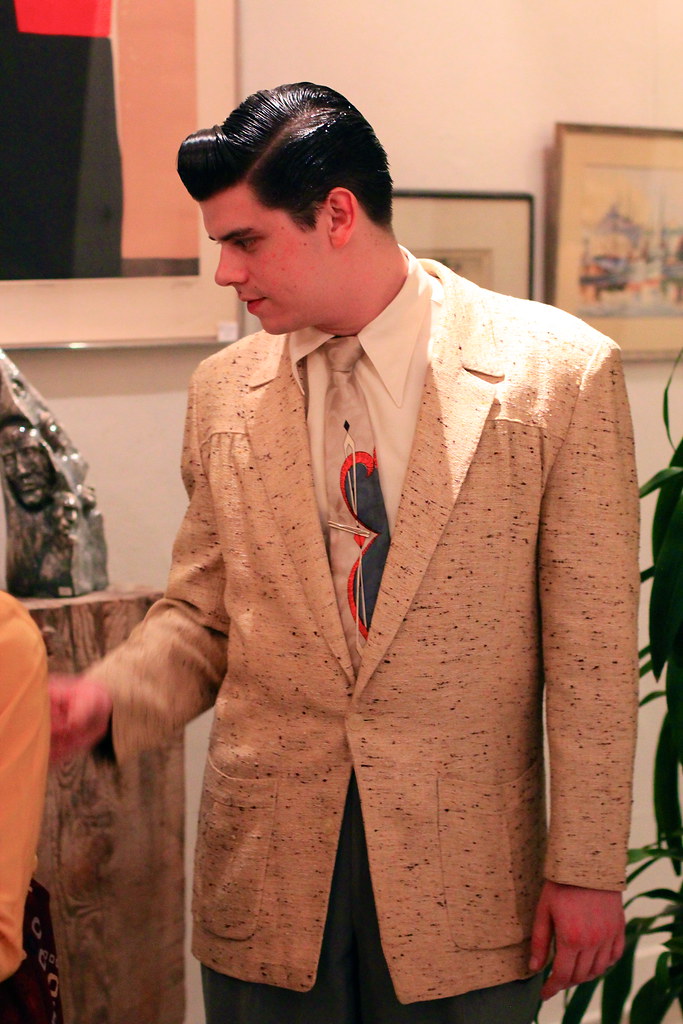 He was definitely one of my favourites of the night!  This crazy type of jacket is reminiscent of a hollywood jacket.  It’s super flecked, got wonky lapels, and a low as hell gorge.  Having this type of dramatic cut was apart of the 50’s bold look, where men’s features were heavily exaggerated.  Along with the pompadour (which is awesome by itself), he’s got a true 50’s tie, which are way slimmer than the 30s and 40’s ties that Spencer and I wear.  It was during this time (1950s) where ties became slim and skinny like the one’s we see today!

Hopefully you guys all learned the main theme:  dressing is all about personality.  It’s not just wearing the clothes of a certain era, its about expressing your desires, aesthetics, and style!  These gents all get it right and hopefully you guys will too!