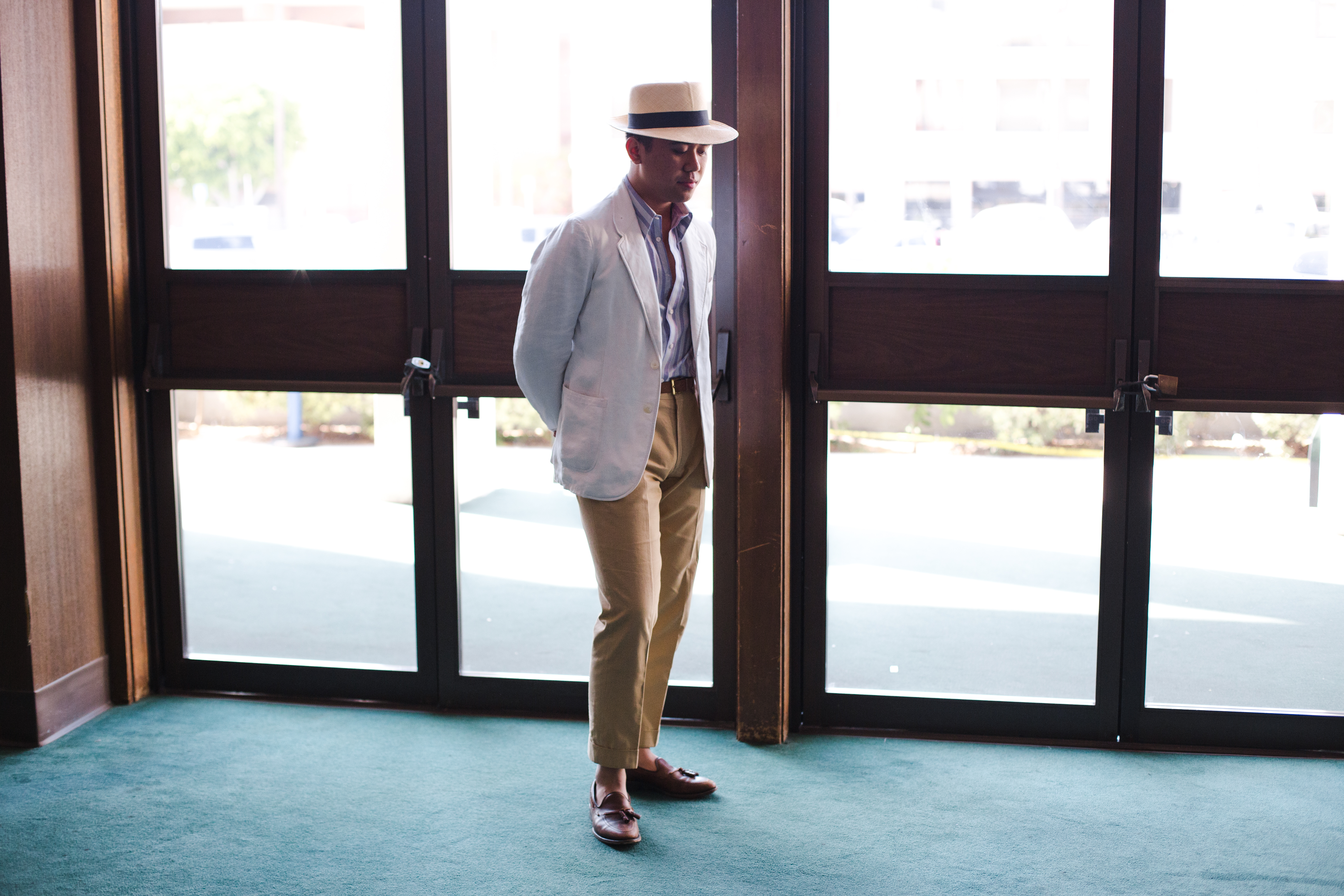 The Armoury has always been a deep source of inspiration for my outfits, due to their “international classic” aesthetic and their stylish staff.  We’ve already replicated outfits from Dick Carroll’s ivy-trad style and Jake Grantham‘s 1980’s redeux, but now it’s time to look to Mark Cho, one of the founders of the Armoury.

Before we get into the outfit, I must say that Mark Cho is one of the most amazing people that I’ve come across in my menswear studies.  According to various interviews, Mr. Cho has a very diverse education.  He is Chinese, but has studied in London and America for his undergraduate and graduate studies.  Mr. Cho seldom appears in videos apart from his completely silent tie-tying series; I did find one video interview with Mark, where he talks about himself and the Armoury   In other promotional material for the Armoury like their tie videos, pocket square videos, and “about us” videos,  we only hear from Jake Grantham, Ethan Newton, and  Alan See (the other Armoury founder).

In this article from @theversatilegent, Mark notes that he has worked in commercial real estate at HSBC, one of the largest banking corporations in the world.  This wasn’t a shock to me, as sharp business acumen is the only way that the Armoury was started and found success.  Honestly, in a world of fast fashion and luxury brands/designers, how else could a small global chain focusing on tailoring truely survive without strong leadership?  Mark Cho and Alan See (who has a similar business background) were certainly up to the task.  Mr. Cho’s success has also lead him to acquire Drake’s London, the tie company that we reference a lot for retro prints and  untipped, handrolled edges. Since the new leadership, Drake’s has expanded beyond ties and has started producing its own shirts and jackets; this fall they are even introducing pants!

Mark’s personal style deserves its own post, but I can say with confidence that it is truly “interational classic”.  He doesn’t stand out too much and prefers a very low-key approach to tailoring.   Here he is in a classic brown, blue, and grey combo.   Like Dick Carroll of the Armoury NYC, he has a penchant for 1960s ivy style; Mark even has some suits made by Tailor Caid, a Japanese tailor specializing in the Ivy Sack Suit.  You can see more of his outfits on his IG @markchodotcom or if you look at the archives on @thearmouryhk

While Mark definitely has a great sartorial taste, it is the following image that triggered this blog post.

To quote the venerable Inspector Gadget, “wowzer”.  Even the tumblr caption calls this outfit “badass”.  It’s a bit of a departure from the typical sartorial outfits and almost crosses the line into #menswear with the white sneakers worn with tailored clothing.  However, Mark still keeps it classic.  He doesn’t crop the pants super high (he prefers a slight break) and doesn’t go to bold with the rest of the outfit.  The jacket is Ring Jacket, the latest Armoury artisan, which boasts large lapels and patch pockets on its wool-silk-linen construction. The shirt is a striped linen number from Drakes; the block stripes scream retro to me, almost like the ones on 1950’s casual shirts.

The entire outfit isn’t something super sartorial and tailored, but it’s perfect for casual wear.  This picture was taken before Pitti Uomo started, so Mark and his Armoury boys were probably strolling around Italy.  I wouldn’t want to wear dress shoes and a suit the entire time either!  While I prefer to have a bit of a sportier white sneaker, his white canvas chucks (maybe?) definitely dress down his outfit and make it suitable for strolling around. 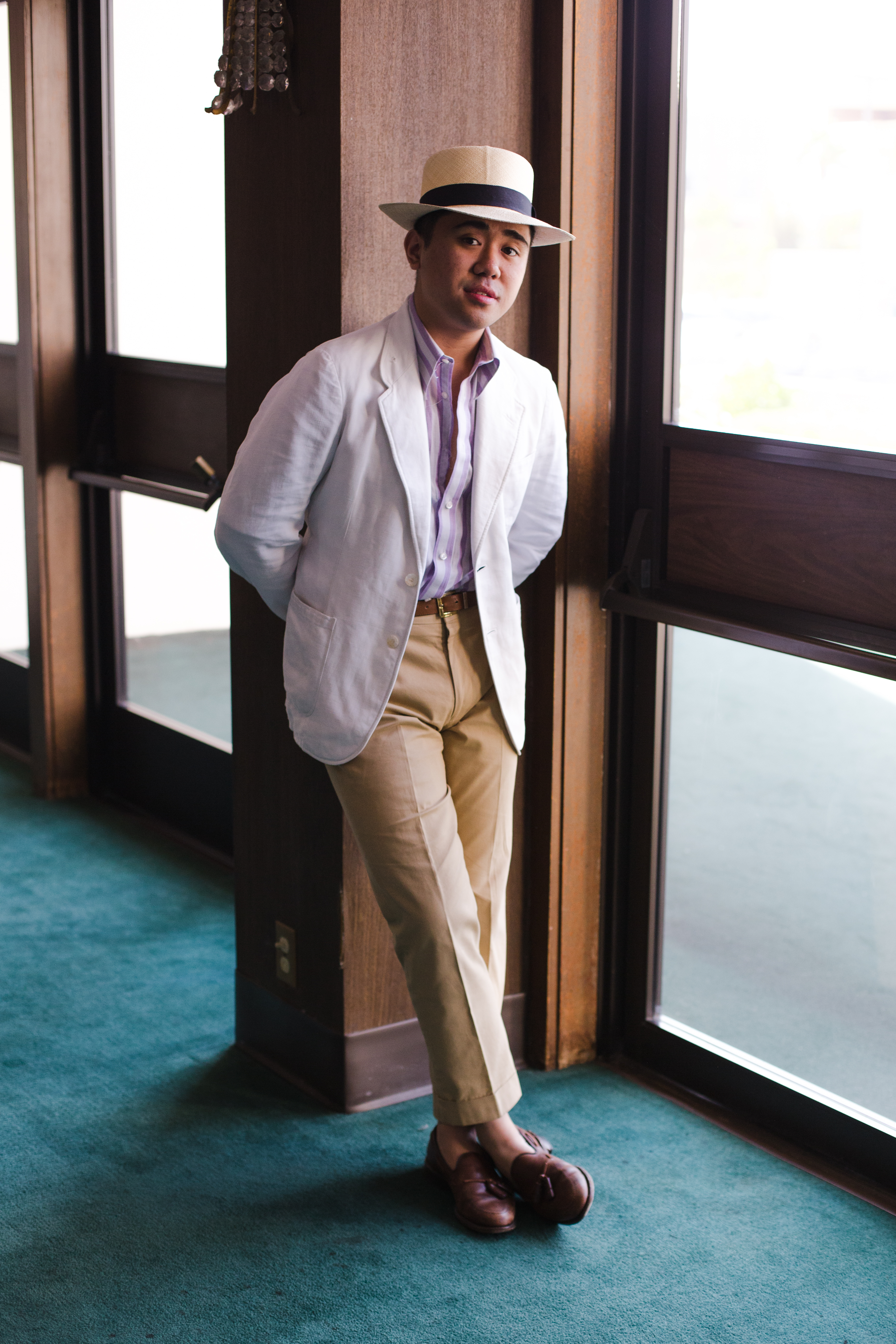 My outfit is just ready for hot weather.  My jacket is made of pure 1930’s Irish Linen, while my shirt is a very thin cotton and my trousers are made of chino.  Instead of wearing canvas sneakers, I decided to stick with my go-to tassel loafers, which are beat to hell Allen Edmonds that I scored off of eBay.  By going with the loafers, the outfit instantly gets a touch formal and more grounded in sartorial style instead of Mark’s casually tailored outfit with sneakers.  The reason why I went with loafers is because I personally am not a fan of sneakers and tailored clothing.  Tailored jeans and sporcoats are one thing, but I just don’t see myself wearing them with cuffed chinos, a tucked in button up, and a jacket.  Maybe I’m just not as badass as Mark Cho. 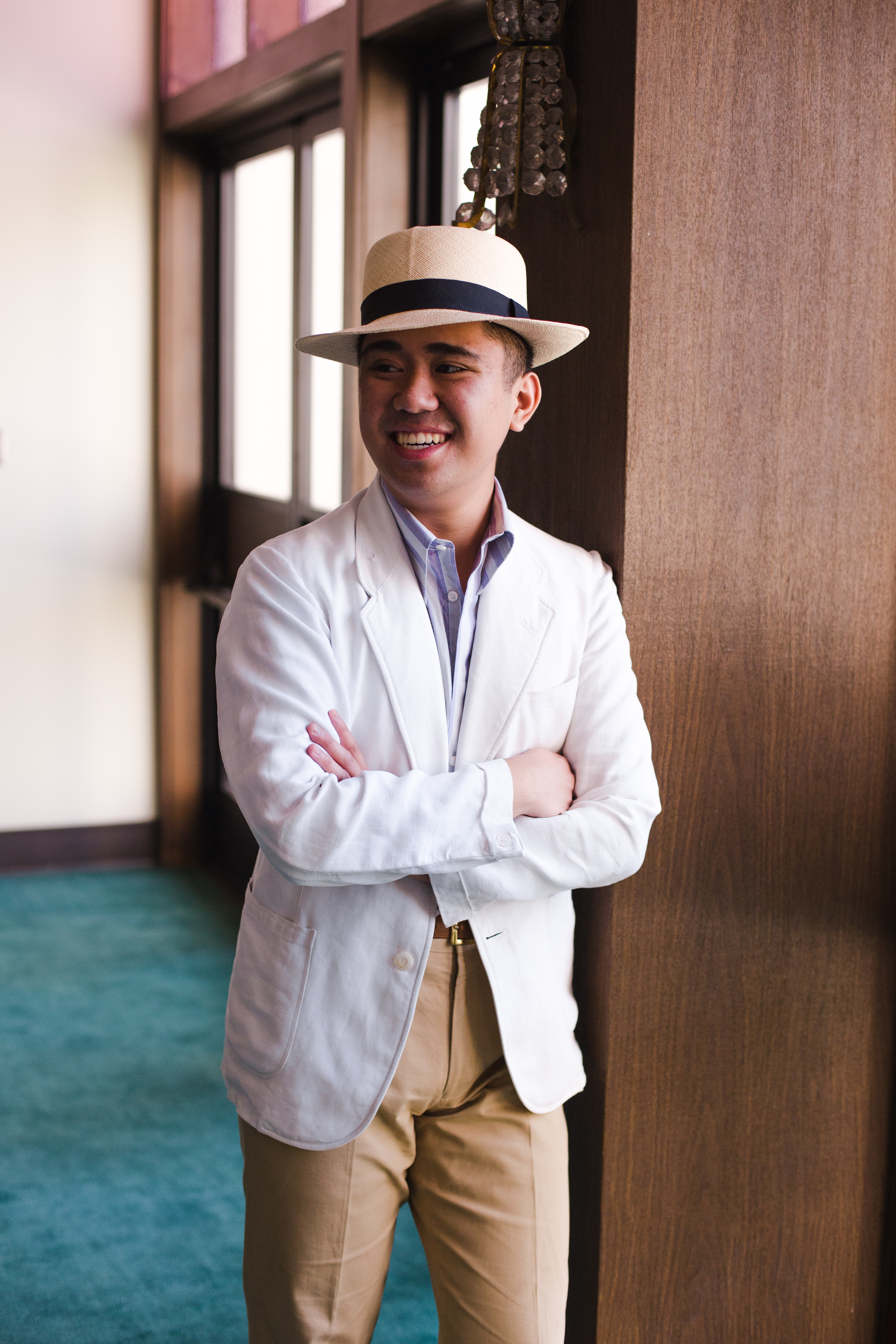 Note that my panama hat has a rounded top instead of shaped like a traditional fedora.  This style is called the Optimo, which is modeled after pith helmets of the colonial era.  As with all Panama hats, this one is woven in Ecuador.  This is because these hats were historically made by Ecuadorians and then sold in Panama; it was named after the selling location and not the manufacturing place.  Don’t ask me, I didn’t name it. 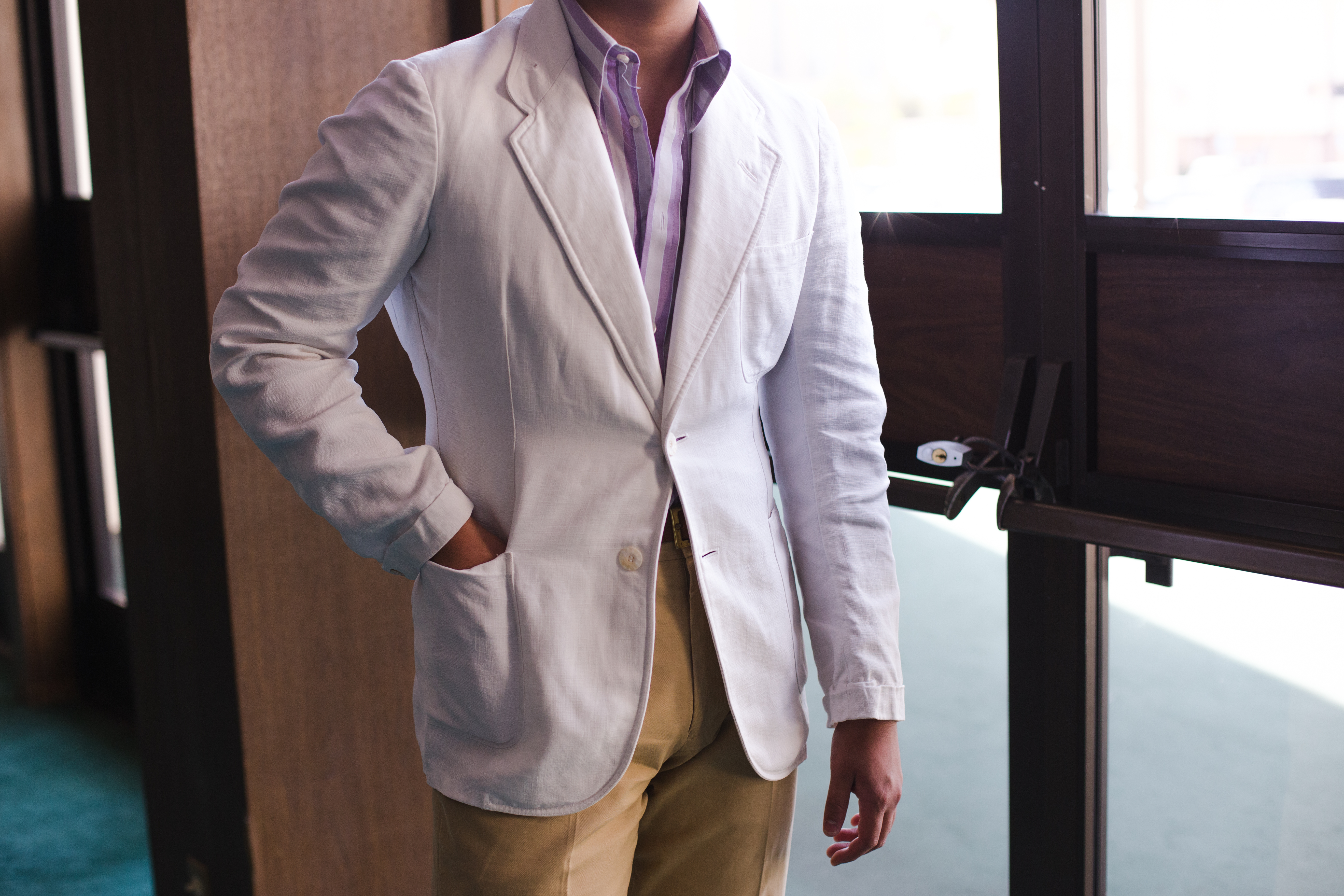 We’ve talked about paying for details, which is the benefits of paying for high-end artisanal items, but sometimes you can get great deals.  In addition to this 1930’s true-vintage jacket being triple patch pocketed and having back pleats, it is completely unlined, with natural shoulders and a belt back.  Typical summer suits and seprates of the 1930s-1940s were made this way and can be found on eBay or vintage stores.  If you find one with natural shoulders or minimal padding, it can definitely pass for modern!  Let’s face it, if I didn’t tell you the age of the jacket, you’d probably think it was made yesterday! That’s the benefits of classic tailoring. 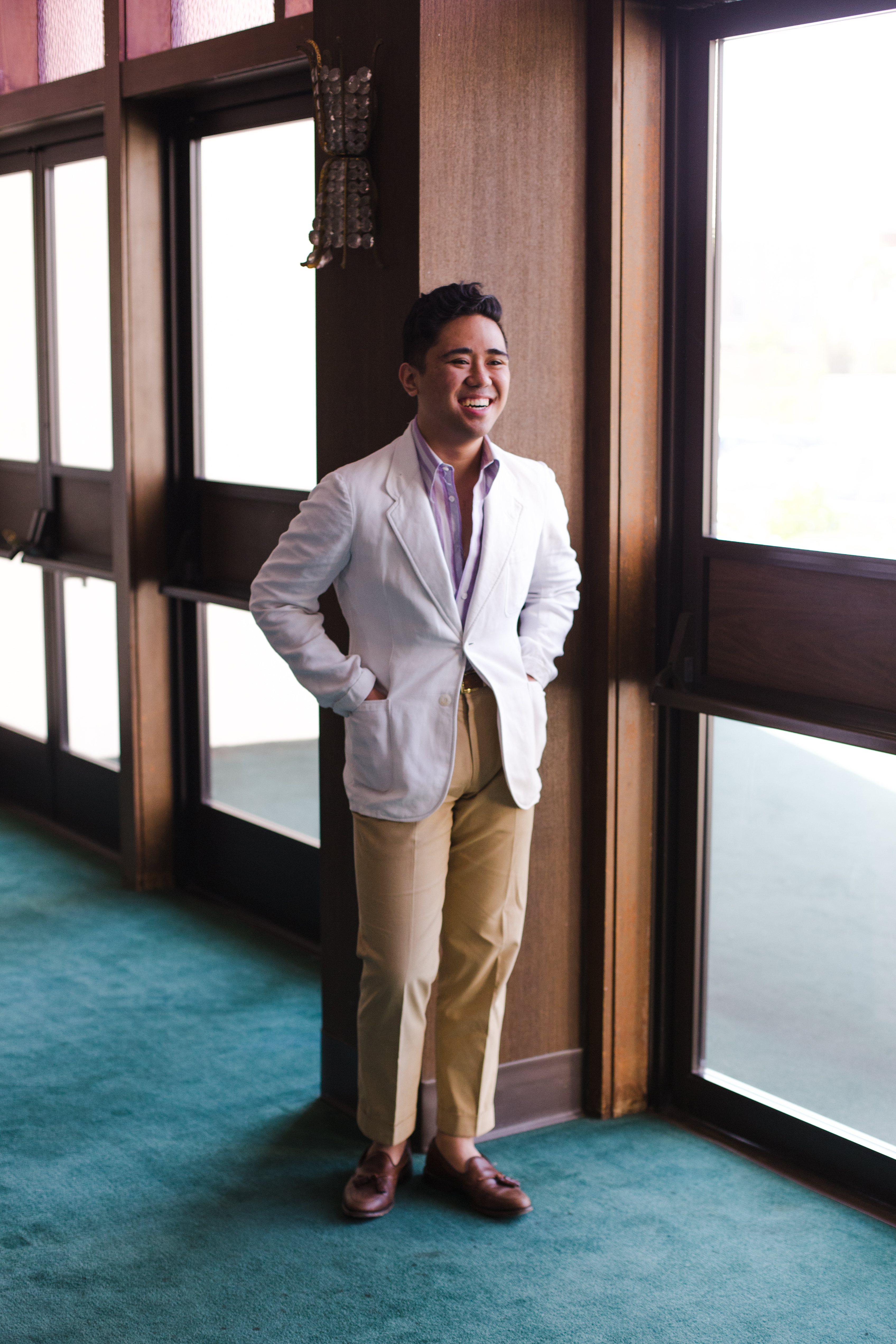 Even without the hat, it’s still a great outfit! The pants have enough contrast to the jacket to justify their choice, and the shirt’s purple stripes add a nice amount of pop!  These subtle yet related color choices are great for hot weather.  The shirt was custom made from Natty Shirts and is a pretty close match for the Drake’s one that Mark is wearing; both look very retro and very summery.  Instead of a buttondown collar, my shirt has a spearpoint collar, which was the collar of choice in the 1930’s, much how guys today prefer a semi-spread collar!

Note how closely the jacket fits, another reason why it looks modern instead of typical vintage.  You always need a jacket with great waist suppression!  Wearing a fitted jacket with high-waist pants calls back to the style of the 1930s.  With the light colors, this outfit definitely looks like something someone in the 1930s would wear on vacation. 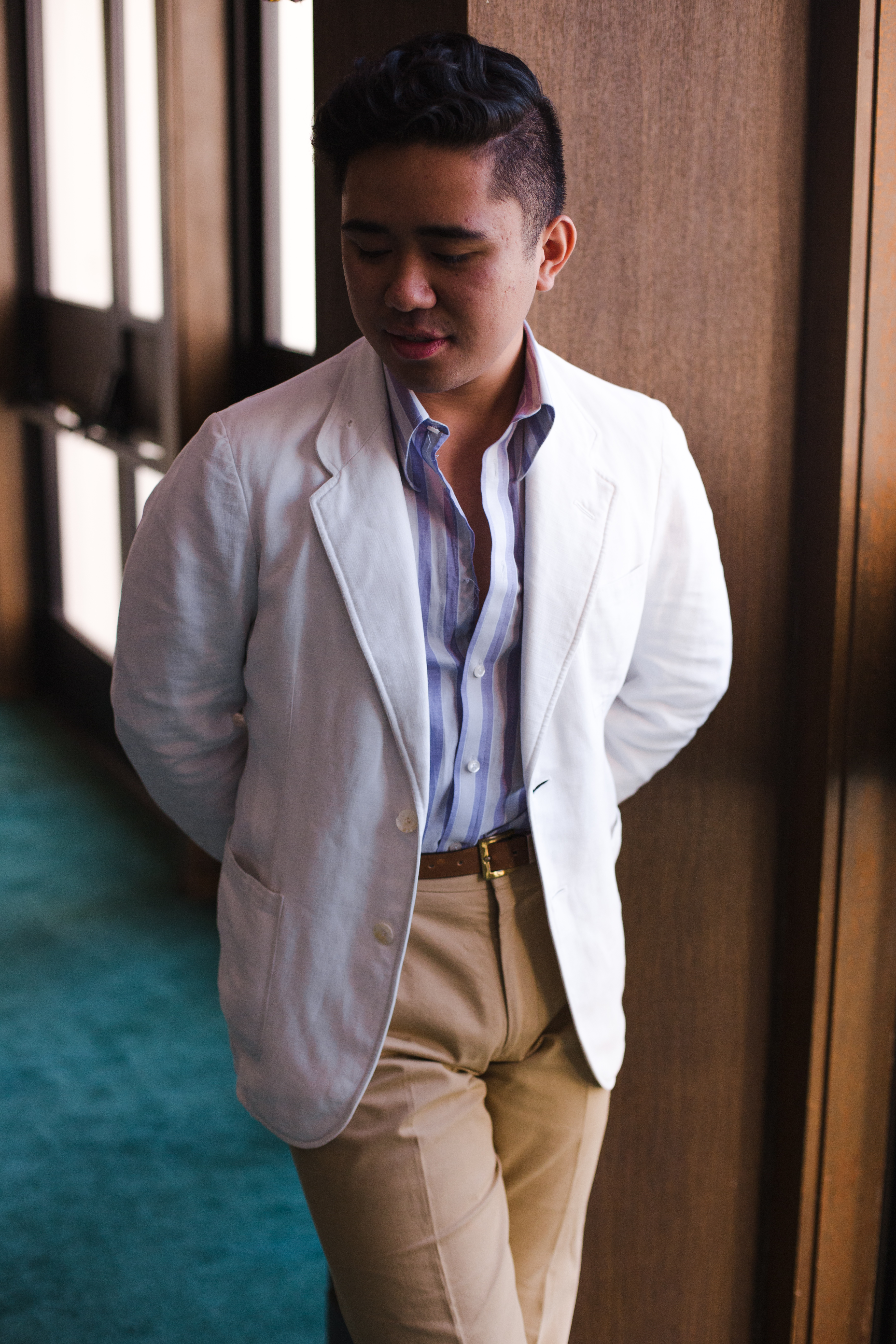 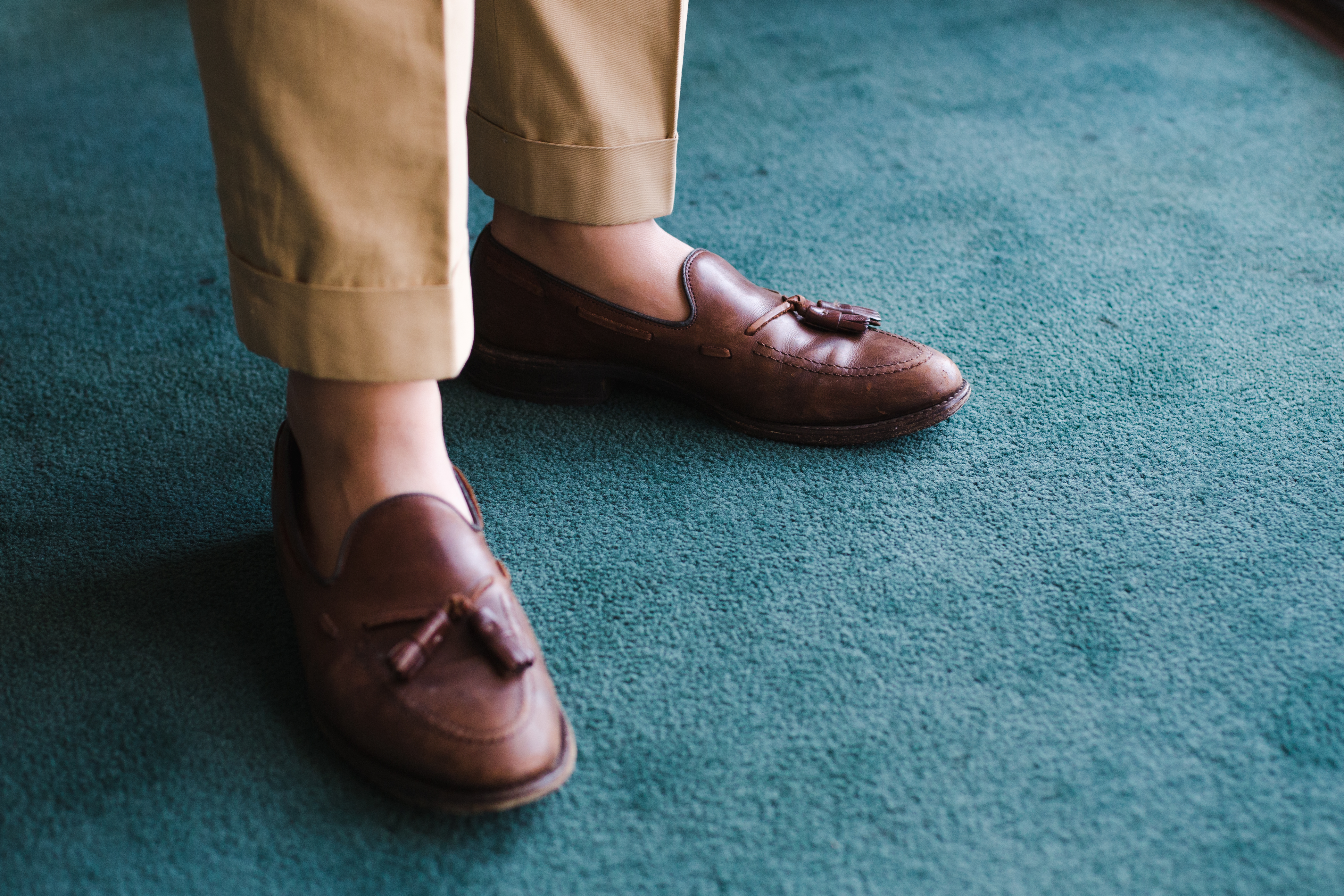 It’s still a bit pricey for most, due to the fact that the jacket was purchased from a vintage seller as opposed to eBay or a vintage store.  Belt backs are rare, and they are priced accordingly! The rest of the items were bought on discount or online, since I can’t stand to afford the true artisanal garments from The Armoury.  If you want to find cool classic clothes that can be dressed up like my style or dressed down with sneakers (like Mark Cho), you really need to go vintage.  Vintage allows you to get similar items that can contain even more history and details than anything modern!  You’ll never be able to find an irish linen beltback, that is unconstructed and triple-patch-pocketed for anything less than bespoke if you try to go modern.  If you spend moderately and get classic items, the cost-per-wear will definitely go down and then you’ll be able to spend more on the statement pieces, like my custom shirt!

I hope you enjoyed this take on Mark Cho’s outfit!  If you can’t already tell, I am infatuated with The Armoury, both in style and story.  It is amazing to see how two men from China with a passion in clothes decided to leave the stable business industry and get into running one of the best menswear stores in the world! They have employed other stylish gentlemen, who each bring a different take on “international classic” for The Armoury team.   Perhaps in the future we will explore more of Mark’s wardrobe, as he is also one of my favorite dressers with his own unique style!

Mark’s picture from The Armoury Lightbox.   Photography of Ethan by Vince H.