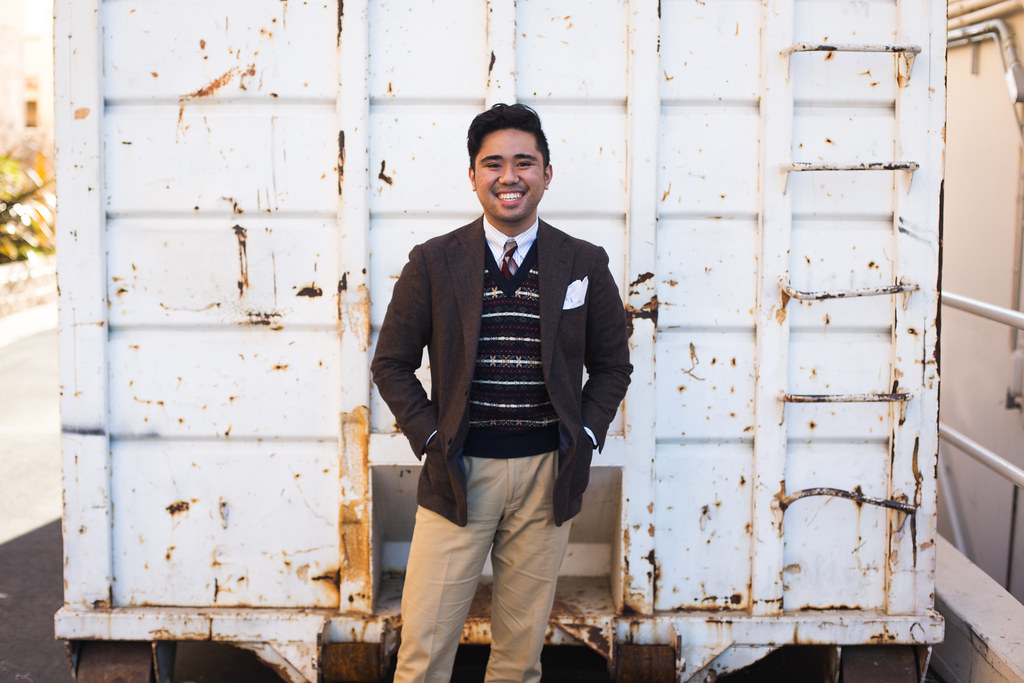 There are a lot of controversial things that this blog advocates.  Spear point collars, collar bars, high rise trousers, and white socks are just a few of those pieces!  Whether you wear these things together or incorporate one, you end up with a cool vintage look that sets your sartorial game apart from everyone else.  Now it’s time to talk about another addition to “Ethan’s Favorite Things”:  the fair isle sweater vest.

Fair Isle is a great pattern.  Consisting of different colors and weaves, you find this pattern on sweaters (both V and Crew) as well as sweater vests and knit waistcoats.  It’s something that’s a bit old school that often gives us grandpa vibes (in both a good and bad way).  Just check out these pictures from the golden era (1930s-1940s)!  While plain sweaters did exist, fair isle was the pattern to get when layering up. As you can see, fair isle was a smart pattern that was great to layer and play with back in the 1930’s.  In fact, the pattern is still popular today, except it seems to only be worn in the full crewneck sweater configuration.  In most modern outfits, it gives you a slight “prep/workwear”  vibe.  There’s even an entire album dedicated to modern fair isle looks that was posted on reddit’s Male Fashion Advice years ago.  They also compile a list of the best ones to get each year!   Even though it is still widely popular, you will notice that most of the looks are worn with casual outfits. You’ll see chinos, corduroys, and jeans (with boots!) but seldom any true tailoring outfits.  Shame, because that’s how the pattern was first worn!

Most guys don’t wear fair isle with suits and its been stated many times to stay away from the sweater vest variety. Sweater vests in general tend to have a a pretty “nerd” or “old man” association, even though I think it looks pretty ivy/preppy.  Also the amount of colors and busy pattern of the Fair Isle do present a challenge to make it work sartorially, which is why the aforementioned album contains fairly (haha) simple looks.  But I think that if you want to add on to your vintage, throw back style, a fair-isle sweater vest is the way to go. I think we need to bring it back.

The sweater vest’s lack of sleeves make it easier (and more comfortable in my opion) to layer with a suit or sport coat, and having it in nice earth tones or subdued colors (as well as having it fit snugly) make it a fine addition to your fall/winter wardrobe.  Hell, Blake wore one underneath his DB suit in our vintage Christmas party post!   To give you some inspiration on making the sweater vest work today, here are two of my looks that use a fair isle sweater vest: under a sportcoat and under a full suit. 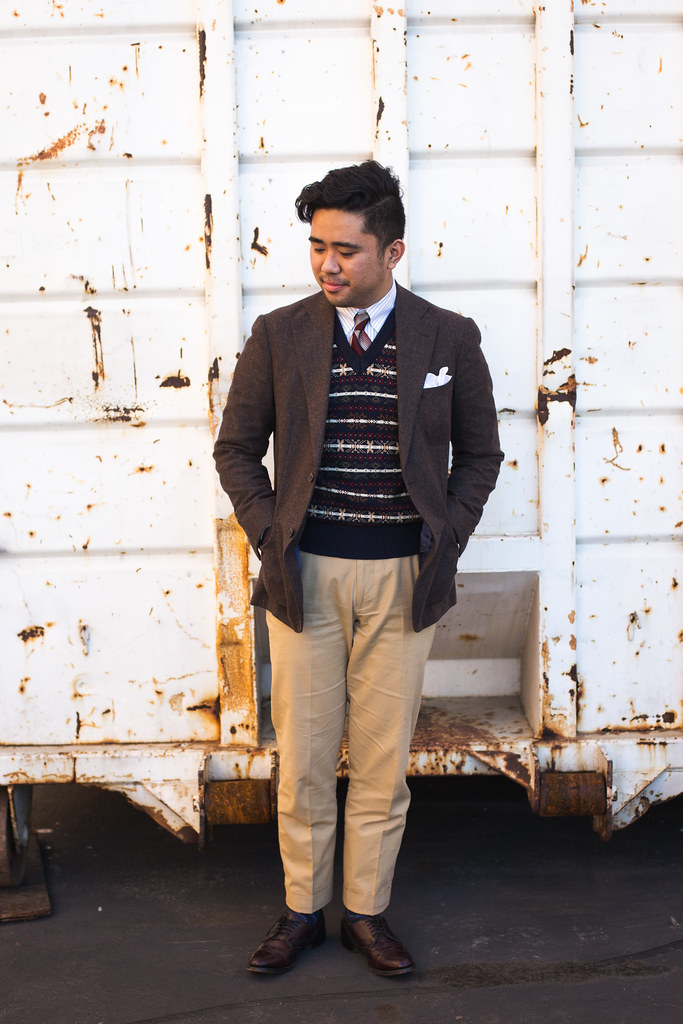 This outfit is perfect for something business casual or for even going out with your trad friends!  The fair isle adds the perfect amount of pop that is perfect for the fall/winter time that sets yourself apart from the masses wearing plain sweaters from the Gap or Banana Republic.  In any case, this outfit is pretty ivy/trad thanks to the button down collar and the preppy nature of the fair isle.

Pairing a fair isle sweater vest with a sport coat outfit is both challenging and fun, due to the fact thaty you have to keep colors and patters in mind when crafting your outfit.  While the inside details of my outfit are complex, I kept it fairly simple out the outside with my brown flannel jacket and khaki chinos.  Earth tones help ground the rest of the outfit with the added effect of being seasonally appropriate for the weather (light colors are utilized best during the warmer months). 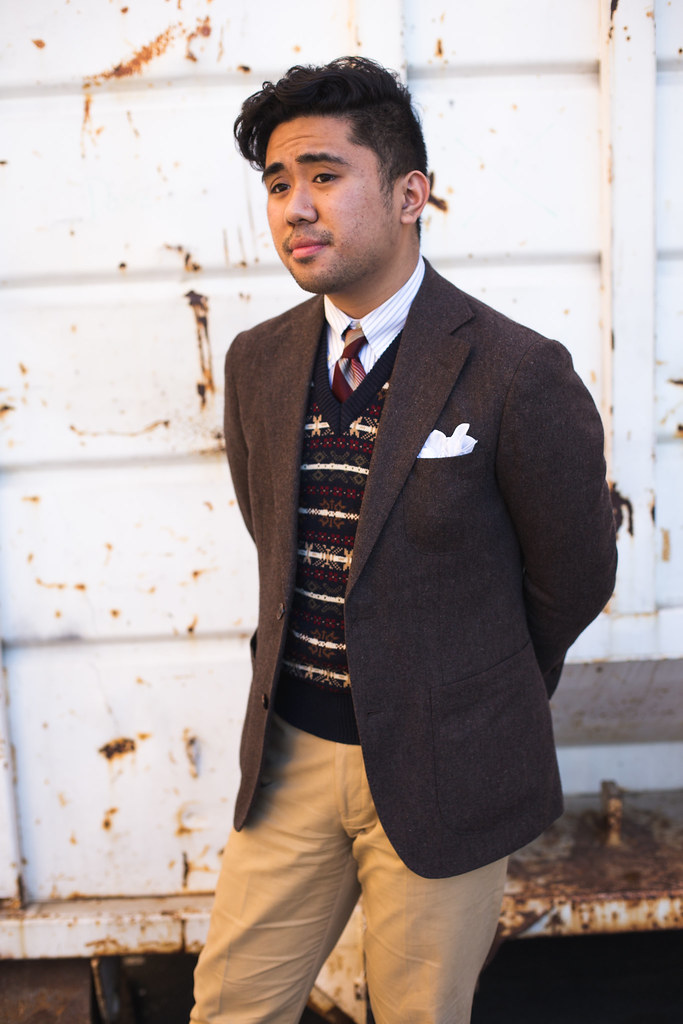 Even though this sweater vest is “semi muted” (blue base, but contains yellow, white, and green), I still decided to mix things up.  If you look closely above, you’ll see that I’m wearing a striped shirt and a striped tie.  It does have a lot of patterns going on, but the scaling ensures that its not too heavy on the eyes.  The addition of a white pocket square (to tie in the white of the shirt and the fair isle) as well as the brown jacket help ground the outfit.  While a houndstooth or herringbone sport coat would be cool, there is such a thing as having too many patterns.  I’m perfectly at home with mixing within the shirt, tie, and sweater and keeping everything else simple.

I also want to say that this sweater vest is probably from the 1980’s and is in fact from the Esquire house brand.  I had no idea that they licensed their brand to make clothes!   The things you find on eBay. 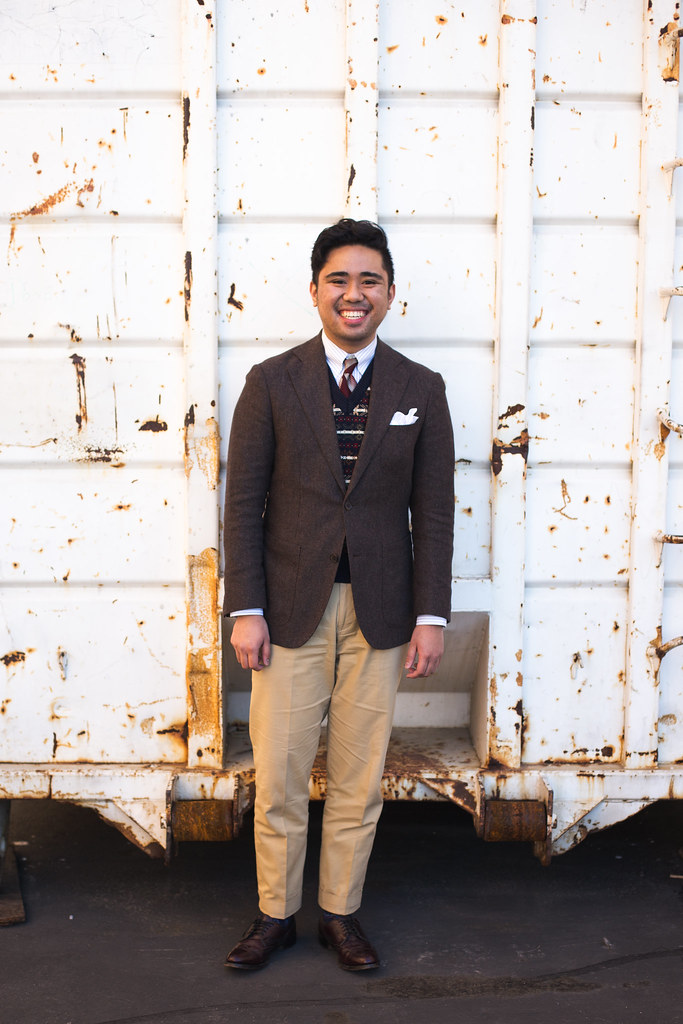 In the end, you have a pretty safe yet fun outfit that gives off a slight 1930’s/prep vibe!  Perfect for a Christmas/holiday party or even just a nice lunch with family.  Sweaters in general are great for layering, but the fair isle sweater vest allows a bit more visual interest in your outfit compared to the expected, plain ones that most gentlemen wear.  Taking inspiration from Golden Era Style is always great! 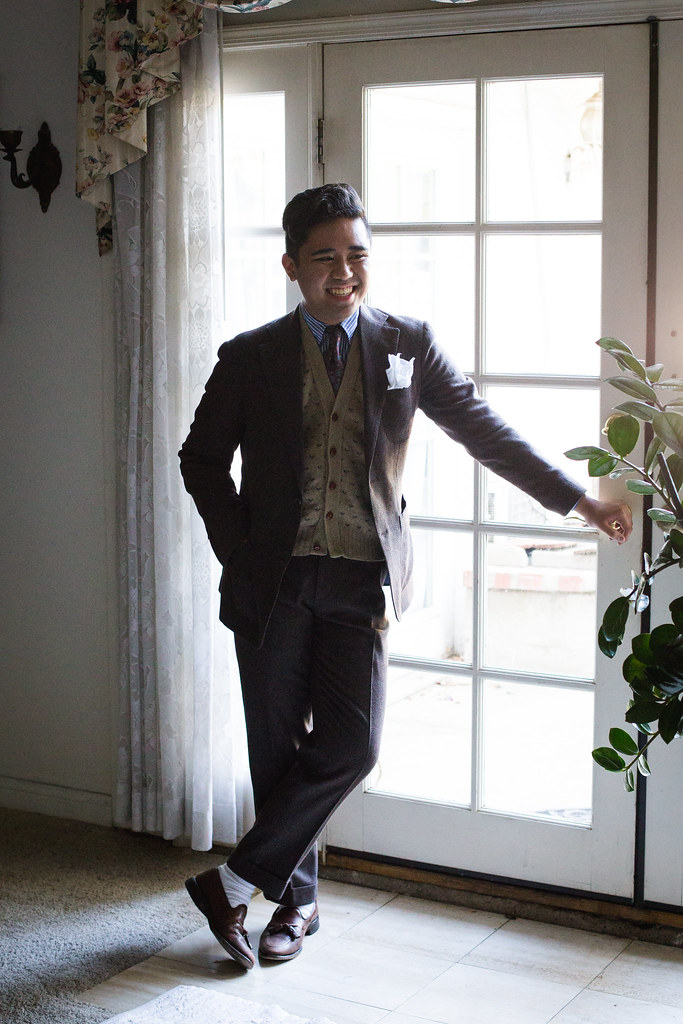 It’s perfect to wear for a vintage party (when you don’t own any true vintage) or even a holiday gathering where a simple sportcoat and chino combo won’t cut it.  The white socks are optional, but still fun if you’re into that ivy thing.  Just be conscious of what you’re doing and the look you’re creating.  Go for white (or cream) dress socks and not athletic socks. 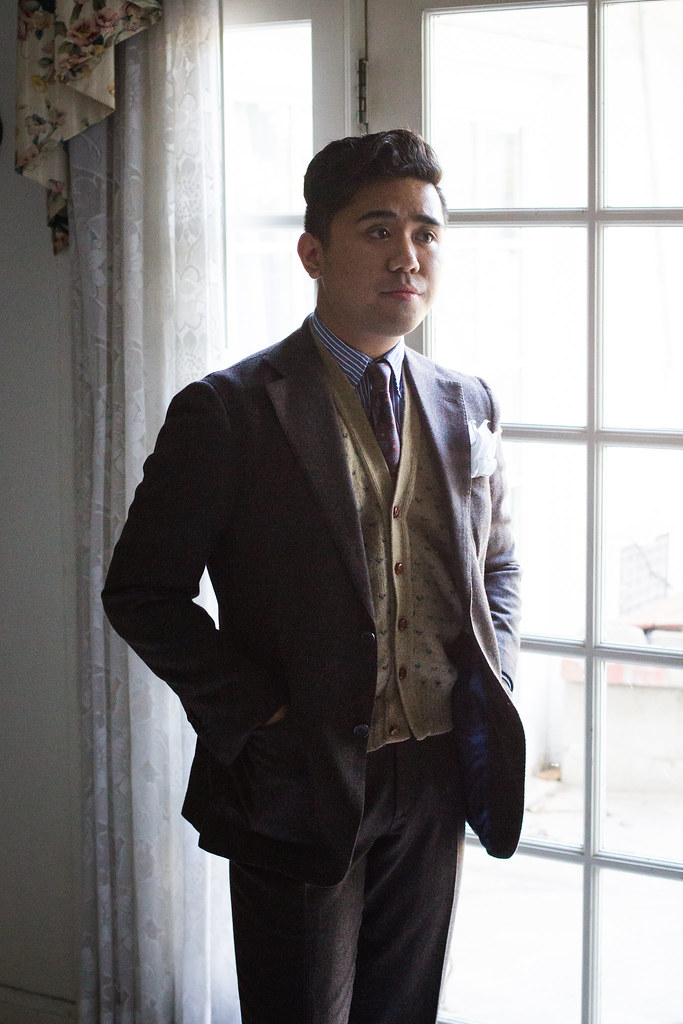 It’s also important to point out that this sweater vest is actually more of a knit waistcoat thanks to the button fastening.  You can even call it a “sleeveless cardigan”, which is what Drake’s and the Armoury call their model.  This piece still follows the rules of the waistcoat, and is the appropriate length to just cover the top of the trouser waistband 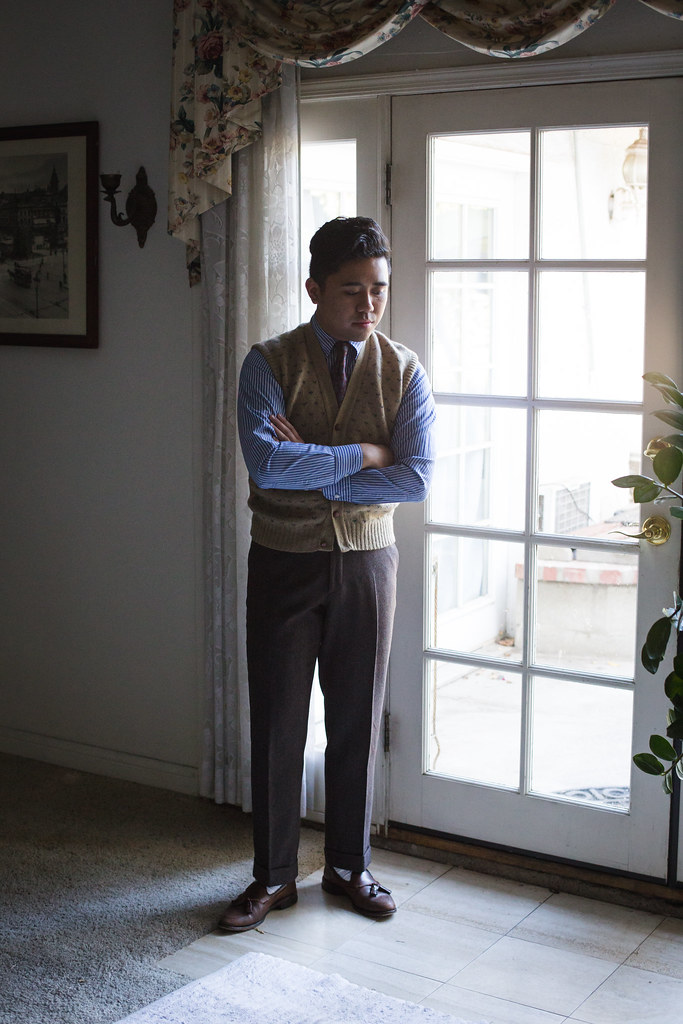 Here’s how it looks without the sportcoat.  It definitely looks like some of the 1930’s advertisements that we looked at during the opening of this article.  However, I will say that I wouldn’t just wear this out sans jacket; the fit of the vest isn’t super snug and the shoulders are a bit too large. If it were up to me, I’d like to have the waist coat fit extremely well like my ivy suit or my 1930’s brown three piece.

Ultimately, the sweater vest by itself is a bit too much “grandpa style”, even for me. This is where you would argue that a regular full sleeved cardigan or sweater would be much better.  However, I wouldn’t mind wearing it this way if it was for a strictly 1930s-1940s event though! 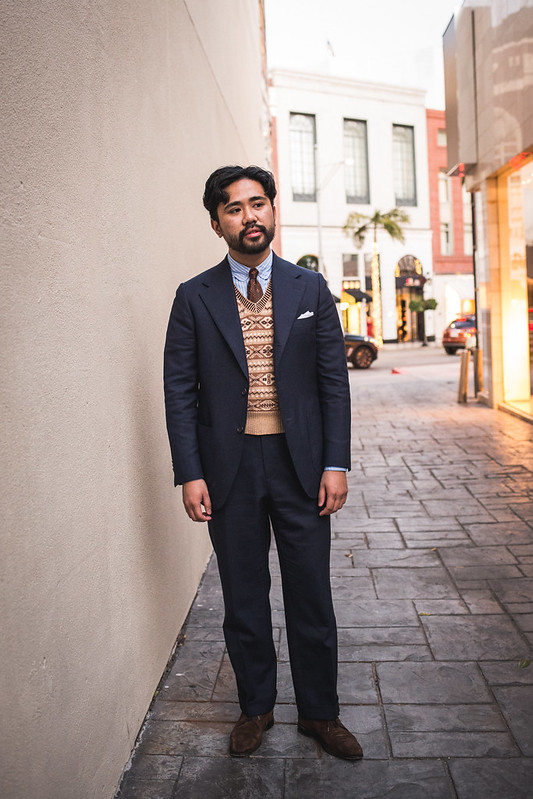 Fair Isle is still an awesome pattern that can still be worn today, whether you wear it with jeans or with tailoring. However, I still maintain that wearing the sweater vest variant can still be a lot of fun! Fair Isle sweater vests are perfect since they allow you to layer and ad visual pop without the bulk of a full sweater.  You can always use them as the main focus of your outfit or you can masterfully go for true vintage styling and combine patterns together like I did!  Whether you go with a full suit or odd jackets and trousers, remember that fair isle is a pretty busy pattern; going with solid neutrals (like brown, as featured in the article) is the best way to pull it off!

Finding a good fair isle sweater vest is hard though.  The first one in this article was found on eBay while the second one was a find at my local thrift store.  Not everyone can be so lucky, but its worth taking a look in the sweater section to see what you can find!  Just make sure the print isn’t too loud or too big.  Note that the patterns we see above (and even on Jeremiah’s Dapper Day outfit) are in more of a medium scale and are in glorious muted earth tones.  Try to find blues, greys, and browns that interweave subtle greens and reds.  The pattern will still pop, but it won’t bee too bold like this #menswear one that unfortunately comes from Drake’s.

Regardless, wearing a fair isle sweater vest is a great way to spice up your sartorial wardrobe in an interesting way.  Just count it among the things that I approve!  I hope more of you considering wearing one, whether or not you go for a true vintage inspired style.  It’s a great alternative (and much more accurate) than going with the #dapperbro look. Overall, a fair isle sweater vest is something a bit more old school that deserves more attention, especially as tailoring and style has been going toward a more classic aesthetic.  Just remember to keep the jacket on; wearing it on its own is still a bit odd to me and takes some getting used to!

Let me know what you think by commenting below! Do you like fair isle? Would you wear the sweater vest?

Photography by Adam B. and Scott E.