There a bunch of places that I look to for inspiration.  If you haven’t noticed, most are taken from the social media profiles of my favorite tailors and haberdashers.   This time we look at one of the oldest places men got their style inspiration from:  fashion illustrations.

Three patterns at once! Amazing.

When it came to fashion inspiration for men in the 1930s and 1940s (the Golden Era), Laurence Fellows was the man.  His illustrations could be found in Apparel Arts, Esquire, and a bunch of other places that both regular men and tailor shops could read them.  If you’re interested in more of the history and facts about this man, you can read them in a great article by Gentleman’s Gazette.

Street style photography wasn’t huge until the Japanese used it during the rise of Ivy, but men still liked seeing how to wear outfits in a natural environment.  At the time, most of the illustrations were product advertisements in catalogs.  As lifetstyle magazines took root, illustrators began creating outfits in a variety of situations and environments in order to help men get better dressed and see what was en vogue each season.  Since Fellows’ work was featured in a variety of magazines, his illustrations really defined the style of the 1930s and 1940s. What you see in his illustrations is something you seldom see today: tasteful integration of patterns and tailoring.  It’s funny; most people today wouldn’t be caught dead with this type of style. Pleated pants, high rise trousers, and patterns on patterns.   Note that none of these illustrations are crazy vintage; there aren’t any zoot suits, baggy pants, or crazy swing ties.  The men illustrated here show a mastery over style and expert tailoring.  Guys today either peacock way too much (with color and extreme patterns) or create the most boring outfits imaginable  (plain suit, plain shirt, plain tie).  These illustrations were made at a time where suiting up was the biggest trend and so men used patterns and tailoring to exude their personality.

Guys today seldom wear this many patterns in a tasteful way.

There’s plenty of inspiration still to be had with Fellows’ illustrations.  Since they aren’t super crazy, you can still apply what you see here today!  So for this article, we decided to replicate outfits to show you that even though it’s the 2010s, you can still dress like the 1930s and 1940s.  There’s a reason it was called the “Golden Era of Menswear!” 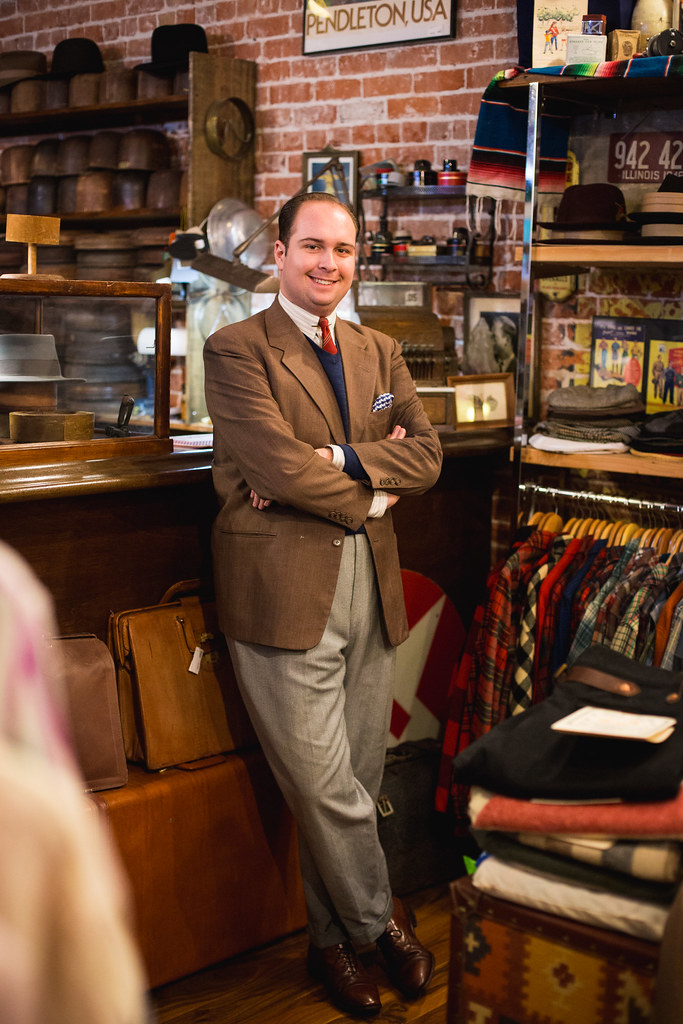 Spencer takes the cake for recreating the Fellows illustration with actual Golden Era Vintage pieces.    Everything is done quite accurately, from the windowpane jacket, striped shirt, blue sweater, and light grey trousers.  Bonus points for having very, very similar pocket square.  It’s mainly all earth tones (with a pop of red in the tie) making it a perfect outfit for fall.

If you can read the illustrations caption (it’s from a reprint compilation), it notes that this combo is inherently classic.  Even though its a 1930’s illustration, it’s not a dated look; if anything, it’s a smarter look than what most people wear today.  Brown and greys are some of my favorite colors, especially since it allows you to play with other pieces!  Plus they’re very “old school” since most guys today love wearing bright blues (and other saturated colors) for their suits and sportcoats. 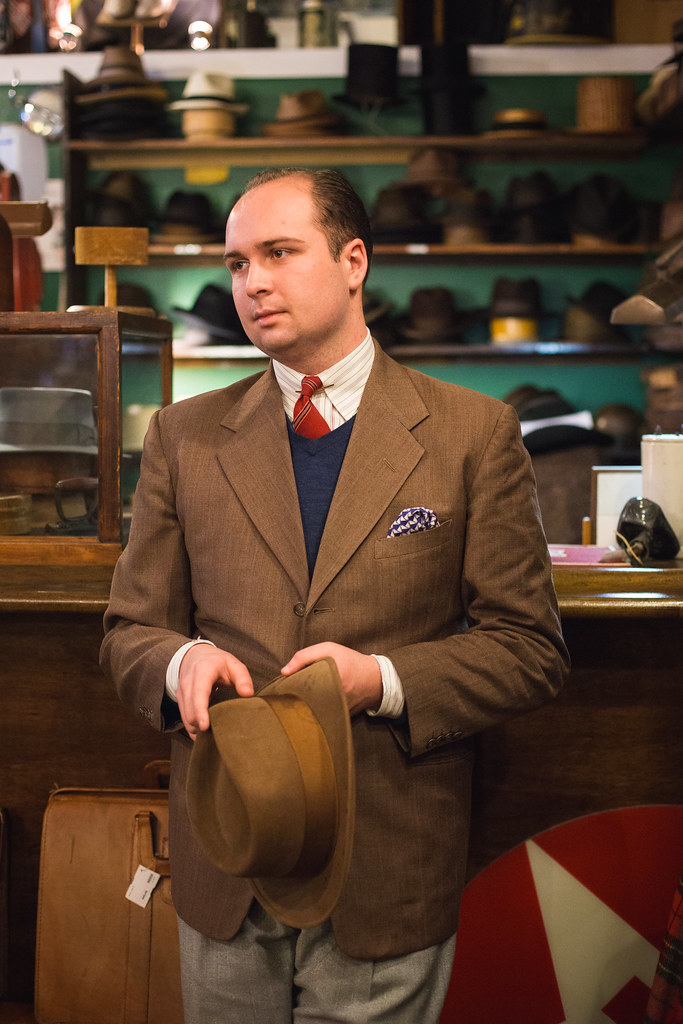 While it doesn’t have flapped patch pockets like the illustration, its still a great sportcoat.  The windowpane is faint, but that just makes it easier to math with outfits.  I definitely love how the sweater and the pocket square help bring out that blue!    Note that its a full 3 button jacket and not the 3-roll-2 of my 1960’s ivy jacket. Small details like these make a fun look! 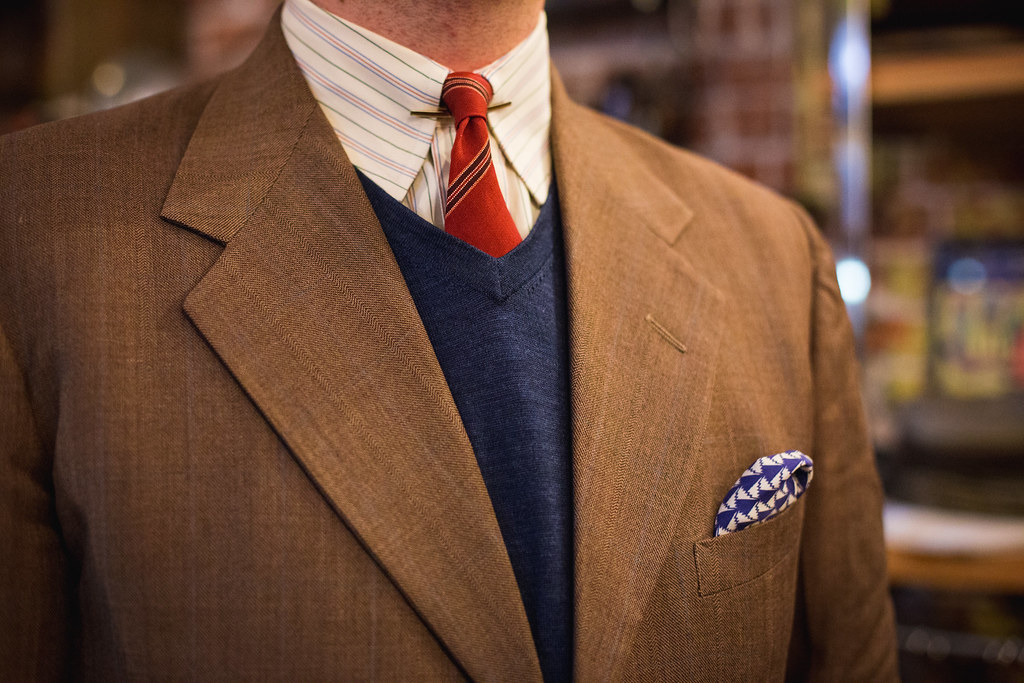 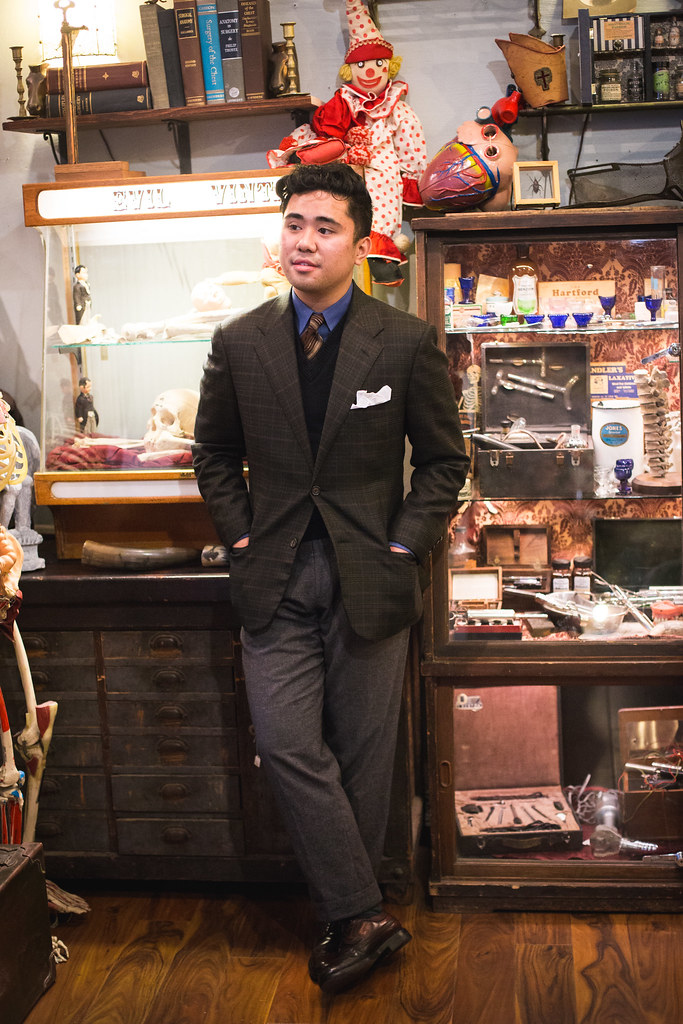 Like Spencer, my outfit utilizes earth tones albeit in a much darker, saturated way.  I think that I recreated the outfit quite well, even though I’m wearing mostly modern pieces.  The dark grey flannel and my navy blue sweater vest help anchor the outfit down, since Fellows decided to play with patterns in the jacket and tie yet again, with checks and stripes respectively.  I didn’t have a lavender shirt, but the denim shirt did the job well!

There’s no bold pinstripes or crazy ties to be found here.  What you’ve got in my outfit is a modern interpretation of classic 1930’s style.  Patterned jackets, high rise, and stripe ties are a great way to dress “vintage” without having to buy true vintage.  I know not many of you like to buy true vintage clothing or have a true vintage wardrobe, which is why I decided to replicate the look with relatively modern pieces.  Only my tie is from the 1930’s; all the other major pieces are from the 80s and 90s. 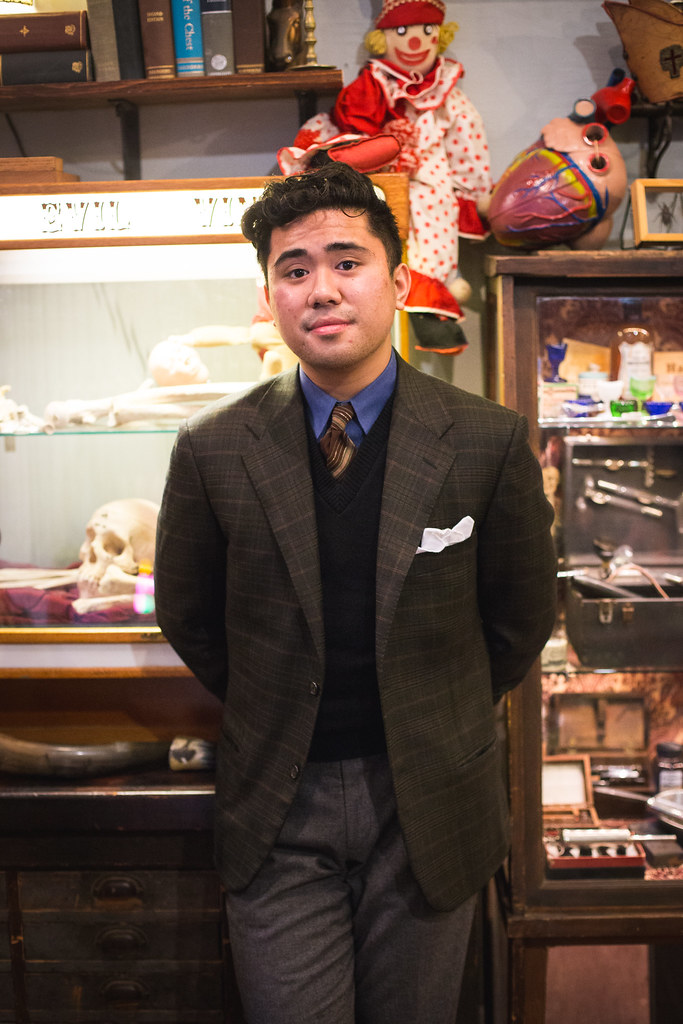 Can I just take a minute to say how lucky I was to have thrifted this jacket?  Not only is it a dead ringer for the illustration but it’s one of the softest jackets I’ve ever owned.  It’s a Coreliani (an Italian luxury RTW brand) and is cut from a gorgeous virgin wool.  The jacket was originally very long (label says 38R) so it must be from the 1990s, since that was the style back then.  I had it shortened and taken in to fit my frame better (which is my typical alteration for thrifted garments).  I now have a great green jacket that is extremely soft to the touch and can be worn with separates or high rise denim!

Take note of the lapels.  They are notch, but see how the line where the lapel meets the collar (creating the gorge) is angled downward and is much closer to the breast pocket than than most modern suits.  This lapel/gorge detail and shape is almost a recreation of the 1930’s detail present in the illustration.  If you can’t tell, I love lapels like this.  The suit I wore to Benny’s Christmas party is also a great example of 1930’s lapels.  When you get to be as knowledge as my friends and I, you’ll begin to see the small details that make a specific era’s style.  Just so you know,1920’s and 1950’s lapels are way different than this. 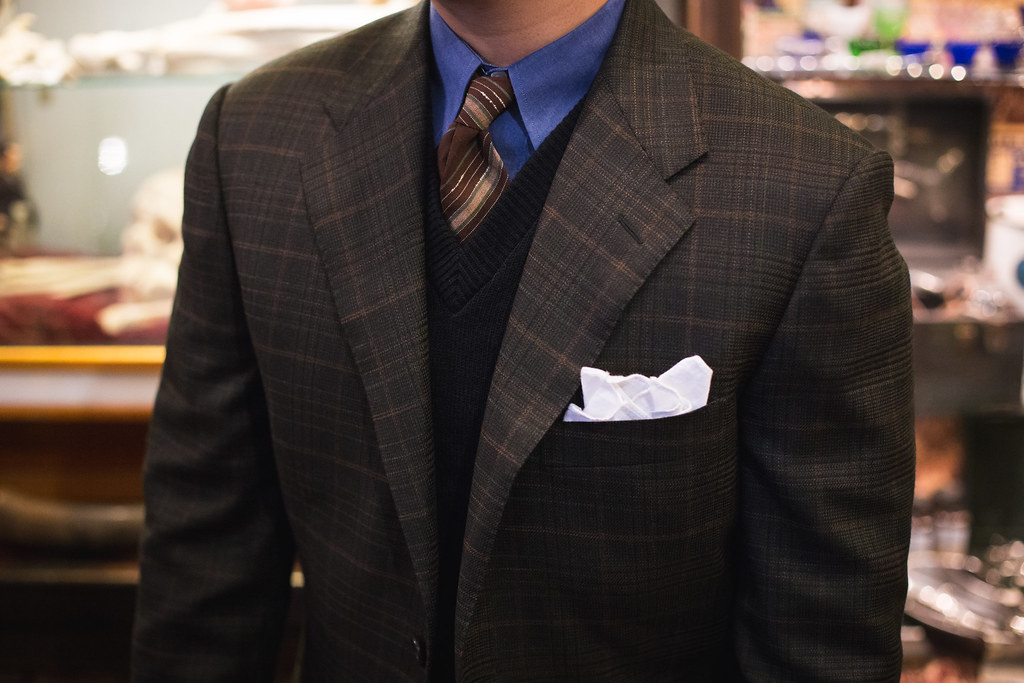 Amazing designer and illustrator Matthew Karl Gale joined in on the fun!   What I love about his choice is how interesting the outfit is.  The outfit on the left of the illustration is the easier (and more acceptable) choice while the right one breaks some weird rules.  While the cardigan, white shirt, and striped tie are a great choice it is the use of striped pants that intrigue me.  The illustration has them as heavy, widespaced chalk stripes; most people don’t advocate breaking up a pinstripe suit for separates, but the 1930’s certainly did!  Now you can get more use of your pinstripe suit! Matthew has pleated striped pants, but the stripes are thinner and closer together.  I think that makes them more easily worn as seprates!

David Lochner, manager of Briar Vintage , got into this challenge a while back!  His outfit above is extremely classic and definite inspiration for a “casually tailored” outfit.  Grey flannels are in use again (can you tell we love them?), but I like how he adds some pop with the fair isle sweater.  It’s not the sweater vest, as I prefer, but it works as a suitable replacement for the one in the illustration.

Here’s something a bit crazy: dinner attire with a straw boater.  Wearing a white dinner jacket is no easy feat (but is perfect when worn classically) but the addition of head wear with a tuxedo is a fantastic, rakish choice. Fedoras have no place with a tuxedo, but homburgs and boaters were definitely worn, just not seen very often.  This example should show you that you don’t have to get classic styling inspiration from a Laurence Fellows illustration; you can definitely find something crazy to replicate!

As you can see, it’s not always about looking at Pitti Uomo streetstyle pictures or the Armoury’s tumblr.  1930’s illustrations (specifically Laurence Fellows) are a great way to get some cool ideas on your next outfit.  Unlike GQ/Esquire or some modern IG #dapperbros, these illustrations have a classic look that provides the right amount of pattern mixing  and crazy choices that can still be worn today!  The fit has changed since then  (especially in the pants), the outfits are filled with so much to learn from.

What I like are how people are so averse to getting inspiration from this stuff.  Guys out there hate high rise/pleated pants like the plague.  They seldom wear patterns or even multiples at once.  I hope that showing examples here and replicating them will help people learn that it’s not “trendy” or “too fashion forward” to dress like the 1930’s.  As you can see, you don’t even have to do it in full vintage; replicating it with modern pieces is perfectly acceptable.   In my opinion, the illustrations are miles ahead than whatever graces the mailers of J. Crew and Banana Republic. These combinations are are nothing new; guys have been drawing (and wearing) them since the 1930’s.  We can thank Laurence Fellows for illustrating such wonderful style that is perfectly relevant in 2017.

Honestly, I feel like this is going to be a new feature on this blog!  I want to hammer in that the “Golden Era Look” isn’t something dated or old school; it’s a source of inspiration that can be replicated today to make a great look. It might push some buttons, especially if you’re a bit of a “conservative” dresser, but don’t go for  modern trends and sponsored blog posts advocating like florals and skinny lapels.  Instead, look for the tried and true illustrations of the great Laurence Fellows.