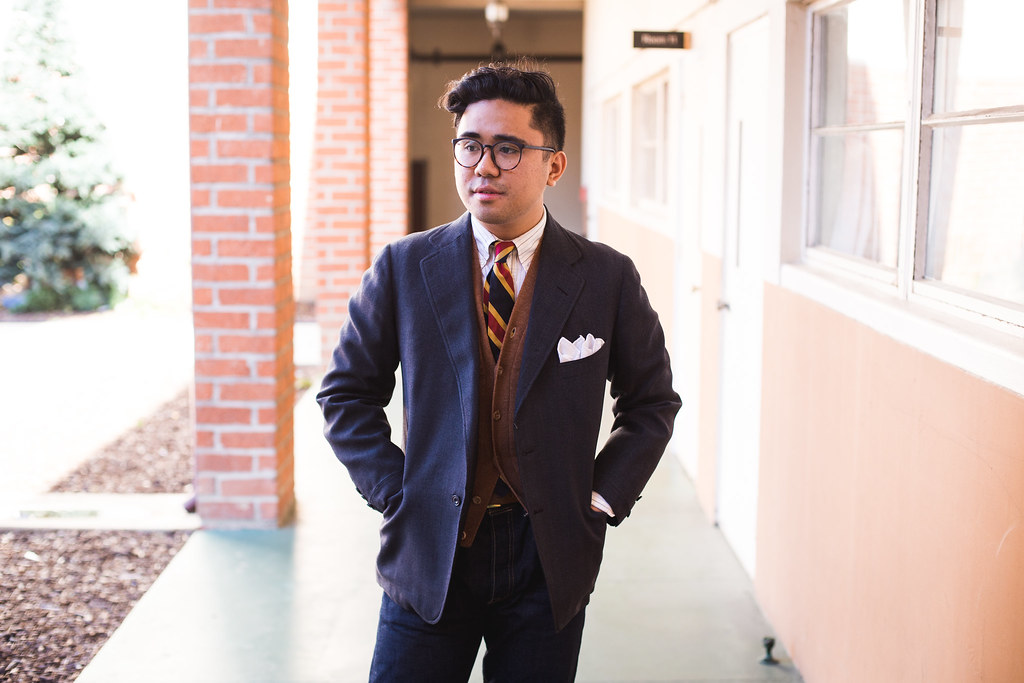 Drake’s London is one of my favorite RTW companies that I’ve discovered during the course of my blogging.  I think I’ve mentioned it many times (here especially), but their ties are probably the closest I’ve seen to 1930’s style ones especially due to the fact that they are usually untipped with handrolled edges.  Overall, I’ve been a fan of the Drake’s style and I decided to dress in their style for this blog post!  Not every brand (or blog) can advocate these three pieces to be worn together: a sportcoat, denim, and a sweater vest.

Every brand has a uniform of sorts that they like to project as their own specific vision of menswear.  Drake’s is a British brand, but they don’t dress like the stereotypical look that you’d expect. There are no structured, roped shoulders with ticket pockets and generous waist suppression; that look can be found at Gieves & Hawkes or Edward Sexton on Saville Row.   Instead,  they have a more casual, easy going air.

I usually describe Drake’s as “english ivy/prep” even though Ivy League style is a distinctly American thing.  Michael Hill (Drake’s creative director) and his associates and models tend to wear soft 3-roll-2 jackets, foulards and stripes, and OCBDs.  It’s modern, but a very “vintage inspired” style.

Even though the company started by producing neckwear, they have truly evolved to becomea full service RTW haberdashery.  While super-sartorial retailers sell Drake’s (The Armoury), the guys at Drake’s definitely dress in their own special way.  And what I’ve noticed is that they have recently begun to embrace a certain more “rugged” or casual aesthetic when compared to their business clients.  And what I’ve noticed this style from the past year includes denim, a sportcoat, and a sweater vest.  It’s really become the Drake’s Uniform and these outfits (or ones like them) are what come to mind when someone brings up the brand!

Michael Hill in a smart,  colorful combo (but sans denim).

It’s a pretty great look that  mixes Ivy (their preferred jacket style), vintage (sweater vests or sleeveless cardigans), and Americana (selvedge denim).  To regular people, it might look a bit “professory”, calling to mind young hipster teachers who like to look well put together but without the formal connotation that you get when wearing real trousers.

You can notice that their jackets are very plain (blues and browns) but textured. Texture is a key to pulling off a sportcoat, since you don’t want it to be mistaken for an orphaned suit jacket.  Even though they are textured, the personality shines through in their sweater vests and ties.  Just note that their sweater vests (they call it a sleeveless cardigan) aren’t baggy or too long.  They are cut slim and are shorter than most, to facilitate them being worn with high-rise trousers and high-rise denim. Both of these pieces are now apart of Drake’s offering and they really do advocate their use. It’s pretty smart to show the versatility of their garments as well as show the different combinations you can make.

Due to the fact that this look shows up in their editorials and their tumblr, it really has become the Drake’s  Uniform, at least in my eyes.  Like I said earlier, it’s a cool contrast when compared to super-sartorial people who usually wear their ties. Plus, they make a great case for wearing denim and ties simultaneously! Some guys say that jeans and a sportcoat (+ tie) is a sartorial mullet: fancy on top, casual on bottom.  I call  bullshit on that , because I love doing it and so does Drake’s.  A good pair of jeans should be able to be worn with casual stuff and “formal” stuff.  It just helps if they’re selvedge and boast a high rise.

Absolutely amazing combo that shows you can wear a tie with denim.

I don’t think I’ve seen a better case to make for the sweater vest.  We’ve seen the “grandpa style” of the fair isle variety, but having a plain one in a cool color would be a great addition to the wardrobe.  I can’t say that I advocate the orange ones, but the browns, burgundy, and blues would definitely have a permanent place in my wardrobe!  I’d go as far to say that I prefer these over traditional vests and waistcoats.  The flexibility of the wool/cashmere is more comfortable and warm that the regular ones and you just get a different vibe that adds personality!

Plus I don’t think that the “denim + vest” look is great at-fucking-all no matter how many times guys love to wear it.  The denim + sweater vest is an intentional and elegant move to make!  Perhaps I’m just biased because I like vintage style.

The Drake’s Uniform is very repeatable and works for almost anything.  Works for a slighty-formal dinner, a business/smart-casual office, or when you’re just feeling like wearing a cool outfit!  There’s just enough personality and old school styling to make me happy.

You can also tell that they love to wear plain shirts (blue and white) cut from oxford or denim.This allows them to play with their fantastic ties as well as add some subtle pop with their printed pocket squares. More often than not, they are novelty prints, which makes it that much cooler!

Brown and blue always go together!

Had enough yet?  I certainly haven’t.  I can’t count how many times I looked through their tumblr account with envy, wishing I could be at a level where I could wear their style! Thanks to a lucky goodwill find and some finally cool weather (60F) I was able to put together an outfit that just screams Drakes. 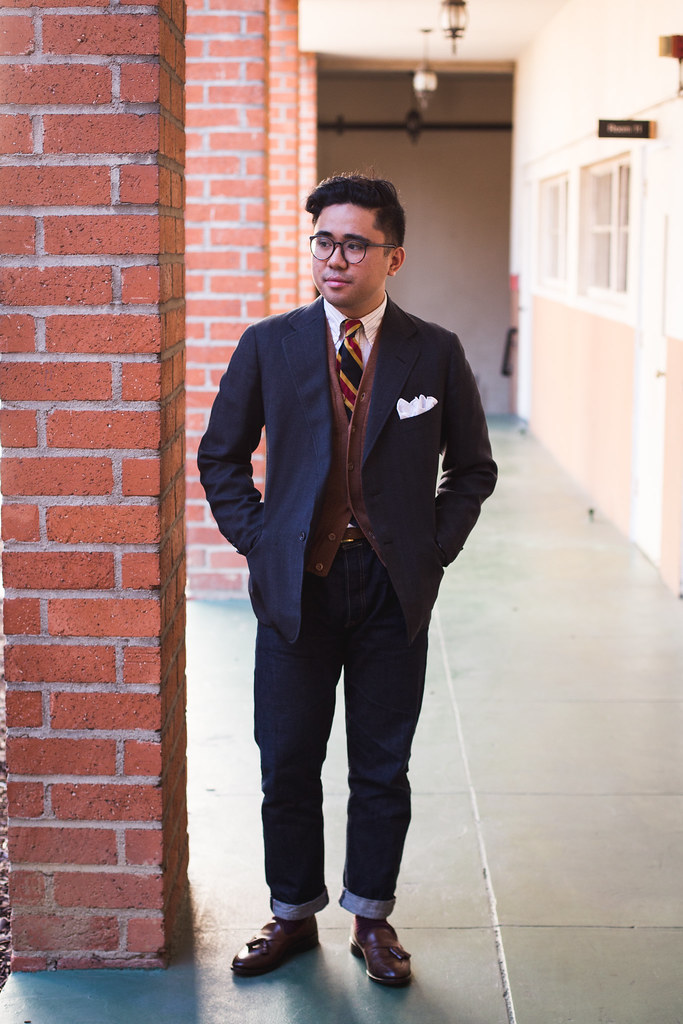 Even though there are a lot of pieces, I think that Drake’s has a a very simple and repeatable style.   I have a blue wool suit jacket (cut from herringbone wool, so calm down), a vintage ocbd and sweater vest, my trusty high rise denim. It’s in the same vein as the Drake’s outfits, mixing vintage, ivy, and modern style.  Overall, the outfit is one of my favorites, since I love the play on textures and patterns, which you can see when you look closer.

The jacket is actually a “new” one and isn’t the 3-roll-2 one that I typically like to wear.  It’s features natural shoulders and wide lapels, but has some pretty great waist suppression.  The fabric is slightly thick, which works best with the “rugged” textures of the oxford shirt, the wool sweater vest, and the selvedge denim.

At first glance I thought the jacket was 60’s, but the lapels and buttoning make it look 30’s; the pants that came with it weren’t pleated which means it couldn’t have been 40s or 50s.  Imagine my suprise when it was stamped with a 1957 date!  It must have been a bespoke comission by a man who wanted all of these details. 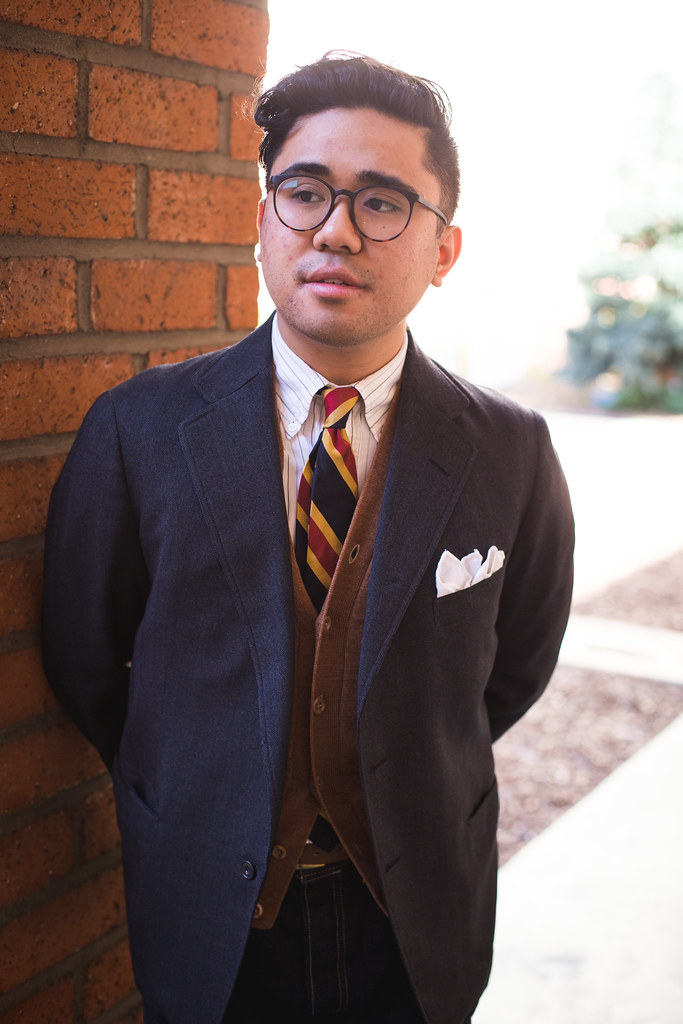 Keeping with the Ivy style, note my shirt and tie combo!  The shirt is a vintage OCBD that I picked up while thrifting, while the tie is a silk repp from the 1930’s.  I love stripes on stripes since pattern mixing is  a pretty Golden Era style cue.  I think this choice is very similar to one that the guys at Drake’s would have made!  I will say that it’s very “university”, which is obviously the theme of ivy style.  The bold stripe of the tie really make the look.

I also kept my pocket square plain white instead of printed or patterned, since I already have a lot of patterns going on.  Plus, the plain white one is a pretty 30’s style, especially when it is “exploding” out of the breast pocket. 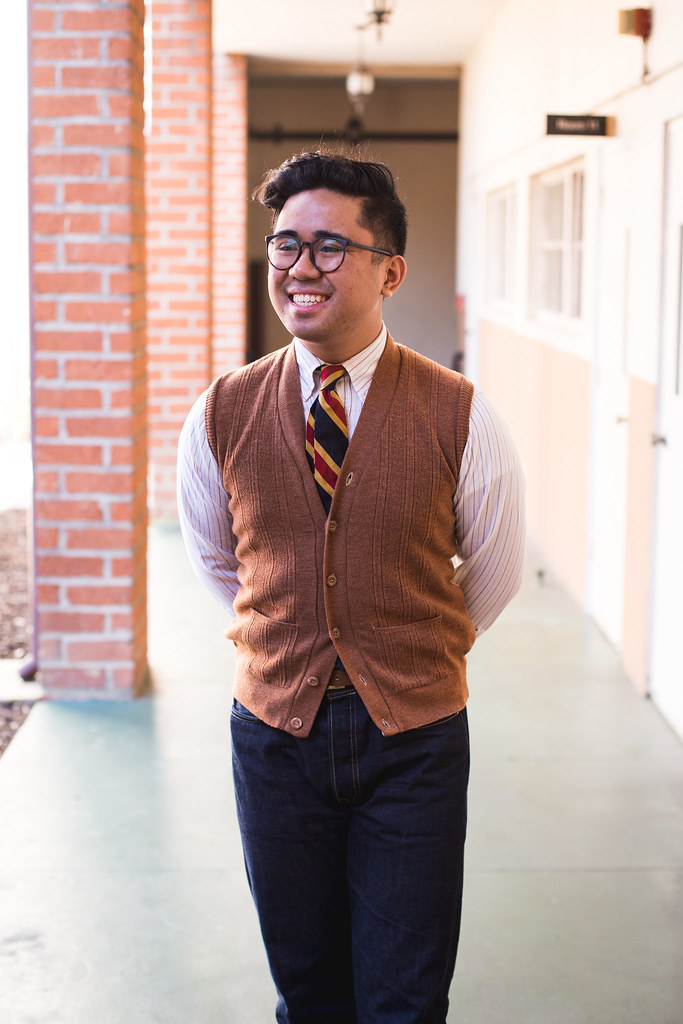 Sorry guys, I don’t have the money to spend on the awesome sweater vests (sleeveless cardigans) that Drake offers.  However, I do tend to have an extra $5 sitting around for Goodwill! That’s exactly how much I paid when I thrifted this amazing 100% wool 1960’s sweater vest.  It’s got patch pockets and a great weave that add just a bit more extra detail than the plain front ones that Drake’s has.  The brown makes it hard to wear with brown sportcoats, but I think it was a perfect match for my blue one!

Note that it fits very snugly on my body, much like how a waistcoat would!  If it was super baggy or too long, it wouldn’t work at all.  In fact, I prefer this one over the fair isle one in my previous article.  If you’re going to make the jump to wear a sweater vest, make sure it fits properly. Otherwise you’ll just give ammunition to your detractors! 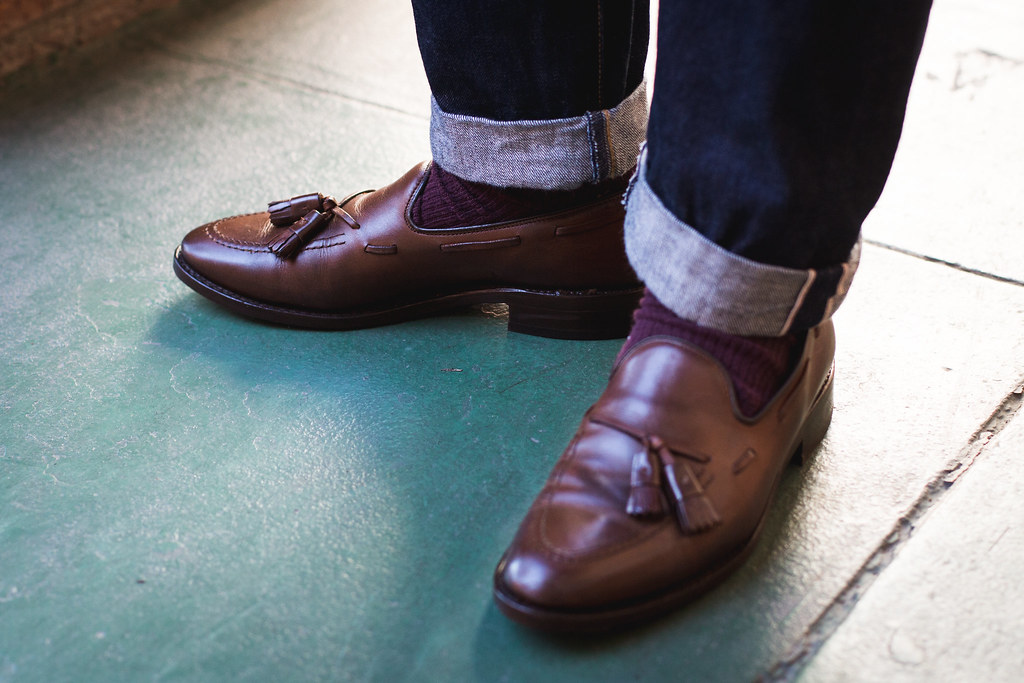 No white socks this time!

As you can see, Drake’s definitely has a cool uniform that mixes ivy with vintage and modern.  I’m proud to see a brand not only rocking denim and a sportcoat, but actually advocating use of sweater vests! I think that we can all agree that it isn’t something nerdy. Just make sure that you get the fit spot on!

Writing this article has made me realize that there definitely is room to show you guys how to dress in certain styles.  This is Drake’s aesthetic and other brands definitely have one, like B&Tailor and The Armoury.  Let me know if this sort of analysis is something you guys like to see!  I think it would help you see which pieces you like and then know which pieces to take for your own personal style.  I sincerely hope you enjoyed this article.